Well... after putting together the video for my Boulder Mountain to Moab hike back in May, things got a little crazy for me and I didn't follow up with a full trip report. With 2013 winding down, I made myself sit down and put it all together this past weekend.

The 18-day, 283-mile hike was quite the experience. In many ways it was a very miserable experience. BUT... despite the adversities, I still managed to have a great time. By the end of the hike I was calling my state of being "Miserably Wonderful." It was a strange case where so much went wrong with the route, the weather, my gear... but despite all of it I kept marching forward and had a really enjoyable trip. I think this is a testament to the magnificence of southern Utah and its effect on the body/soul. And... since my body held up with just the normal blisters and bruises, I'm already thinking about next year!

In the trip report I tried to capture a lot of detail. I split it up into 4 sections and included a photo gallery and detailed map for each part marking route difficulties and water sources. I'm not going to re-create all that here, but if you are interested in the day-by-day minutia check it out on my site:

Across Utah: Boulder Mountain to Moab

But, I will use this space to share some/many of the highlights with a bunch of pics.


Setting out from the Homestead Overlook on the upper slopes of Boulder Mountain:

Walking along the rim of Upper Gulch: 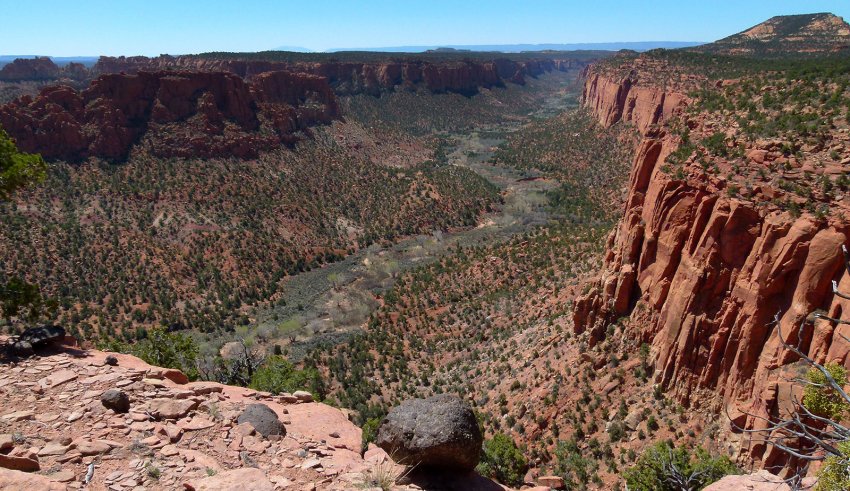 Day 2 and already an unexpected obstacle -- the climb down from near Impossible Peak:

Mr. Shadow following the cattle trails along the Circle Cliffs: 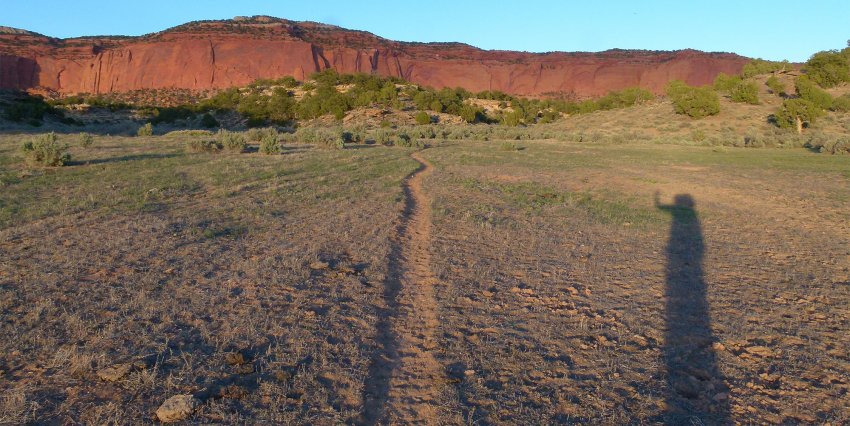 Problem #2 -- no water at Onion Beds or anywhere in Upper Muley Twist: 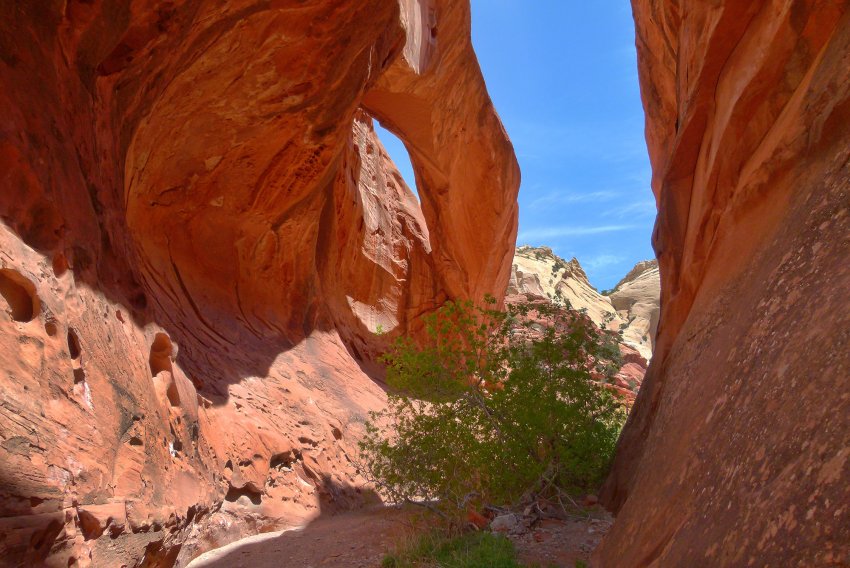 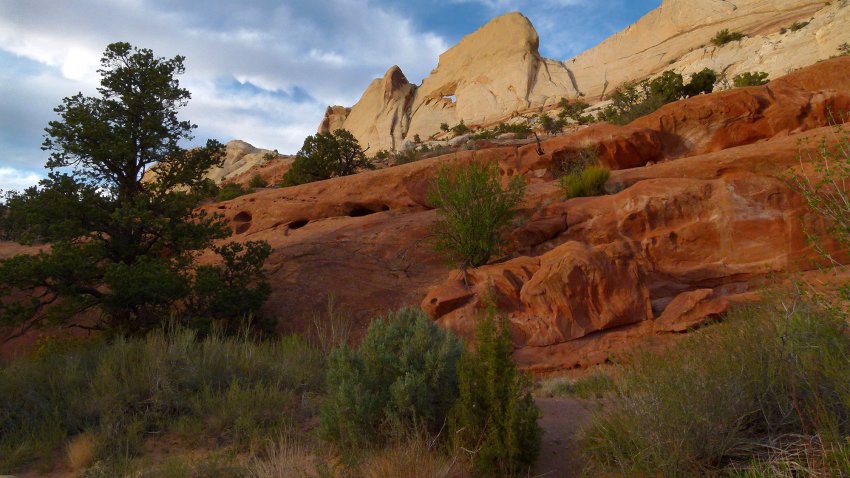 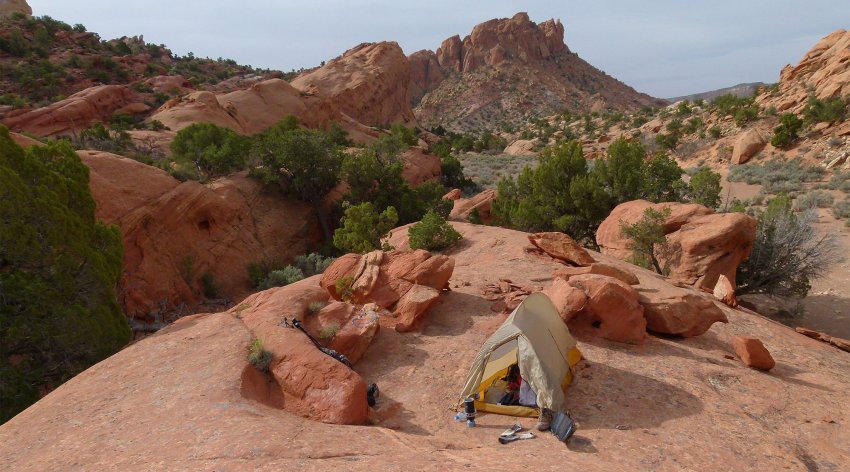 This balanced rock was a fun surprise en route to the Henry Mountains:

Seems like I always attract bad weather in the Henrys. Rain, hail, fog and eventually snow forced me and my "spring" gear off the planned route:

The improvised route down around Ragged Mountain via Slate Creek, Ragged Canyon and Psyert's Hole was a fun adventure.

It even led me to my first visit to Little Egypt:

From that point the sun came out and I was happy. Happy in Happy Canyon:

The route up and out was a bit more of an adventure than Kelsey's "easy to follow" would have you believe: 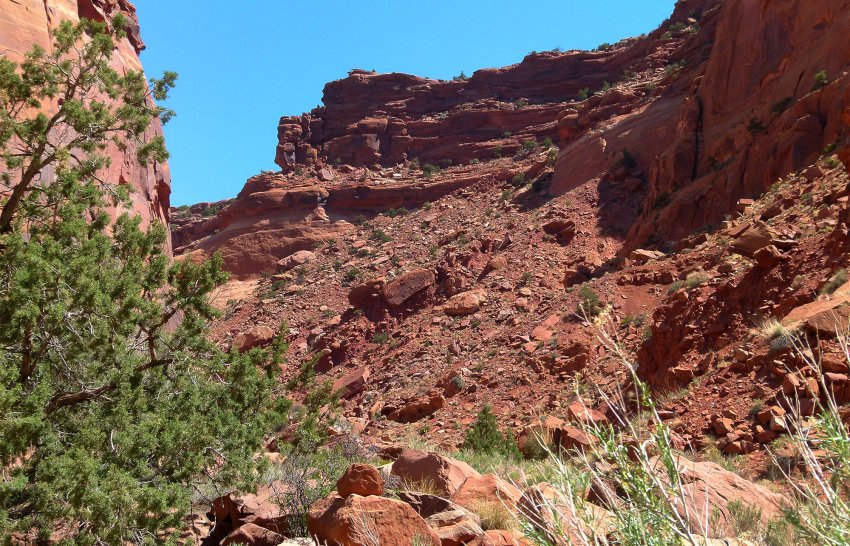 Once past Hans Flat, the great view of Millard Canyon:

En route to the Maze, flowers were in bloom and bugs were endulging:

One of my favorite views around:

I enjoyed Pete's Mesa Route, but was bummed to miss Water Canyon (yet again) to get to Spanish Bottom on schedule:

The climb out of Little Spring Canyon and the unique arch near Lower Jump: 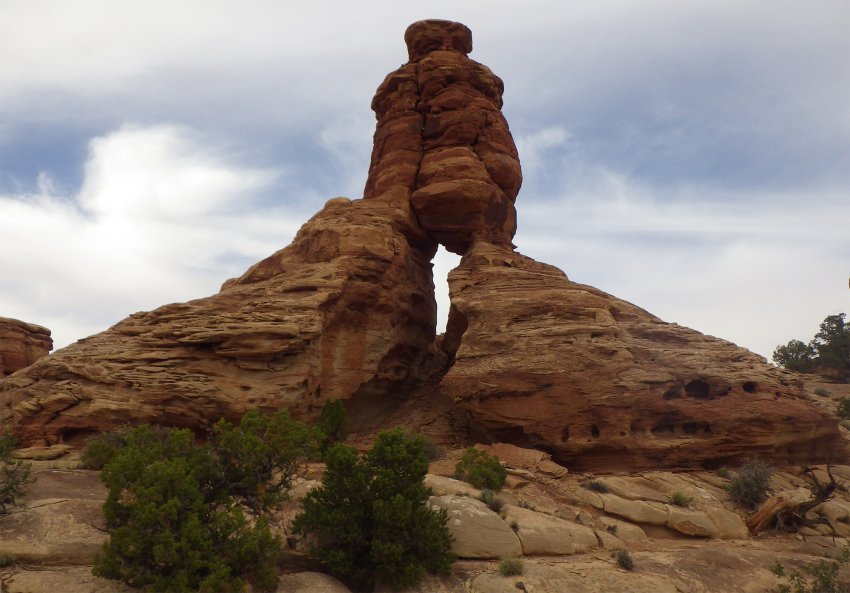 The route to, through and past Indian Creek is spectacular and deserves more time: 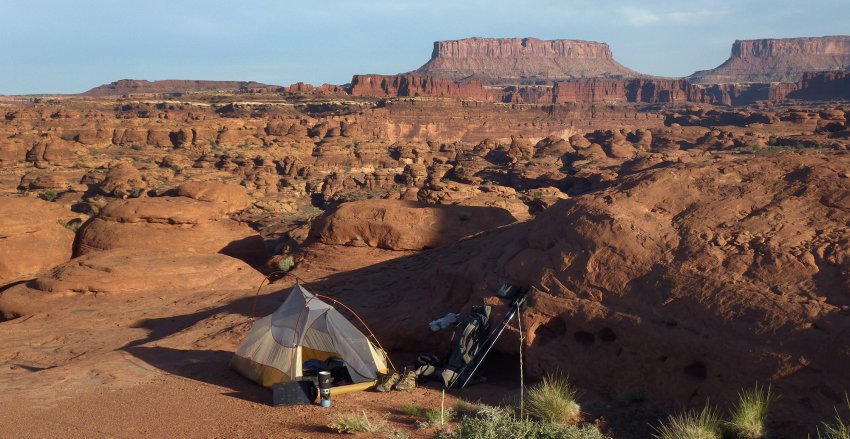 Possibly my biggest feel-good moment of the trek, finding my own route out of Lockhart Basin to atop Hatch Point: 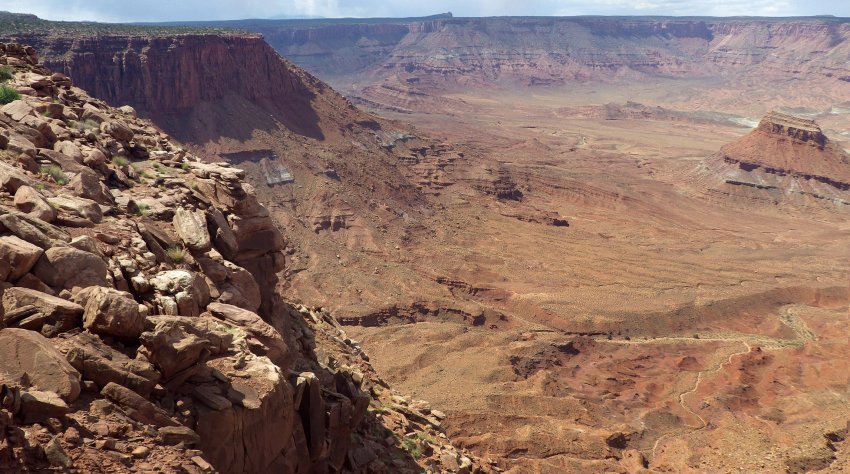 After another storm (or two) it was down Trough Springs Canyon toward Behind the Rocks:

My final climb up to Behind the Rocks wasn't meant to be. Despite having scouted a route previously, late in the day I ended up getting ledged out near the top and had to retreat to Kane Springs Canyon:

Out of time on the final day, I opted to walk the road down to the Colorado and then up to the Moab Rim Overlook. Mission accomplished -- time for burgers and beer!

Jamal, do you think there's an somewhat equivalent route a bit farther north? I've been eyeing some routes from Thousand Lake Mountain down into Cathedral Valley, then maybe into Chimney Canyon. Or does that contain way too much boring / no-water walking?

regehr said:
Jamal, do you think there's an somewhat equivalent route a bit farther north? I've been eyeing some routes from Thousand Lake Mountain down into Cathedral Valley, then maybe into Chimney Canyon. Or does that contain way too much boring / no-water walking?
Click to expand...

Hmm... not sure. I've actually never explored that part of the park. Truth is that most of my homework has focused on the southern part of Capitol Reef. Even the Boulder Mountain portion of this trip was really a new experience for me.

BTW there is water that I believe to be pretty reliable in Happy further up French Spring Fork than you went. Plenty of cottonwoods and that sort of thing. I love that route out of Happy!

Amazing route. What a cool accomplishment.

regehr said:
BTW there is water that I believe to be pretty reliable in Happy further up French Spring Fork than you went. Plenty of cottonwoods and that sort of thing. I love that route out of Happy!
Click to expand...

I would like to spend time farther up in French Spring Canyon. It looks like the water starts not too far from the jct with the spur -- but I didn't have time to explore past the exit.

Did you check out Kelsey's alt route out by any chance? It's the next gully farther up the canyon and goes directly to the old drill site. He says something like "requires a bit of a climb". I usually find that when he says something like this it translates to "too scary" for me -- especially solo with a big pack. Looking down on it it didn't look that bad, but there were many spots I couldn't see that well (likely the spots which were the most sheer!)

We went partway up Kelsey's alternate route but turned around before we got to anything scary. There's a short initial section of boulders and trees, then some nice slickrock scrambling. Subsequently I heard from a group of competent canyoneers who used this route as their entry and exit, here's a quote:


We are back from French Spring, had a wonderful time. The route we took​
in was more strenuous, including exposure, than we anticipated. As the​
crow flies its a 1 and 1/2 mile route to French Spring Canyon, the GPS​
track showed we covered a little over 6 miles to do that, mostly because​
of the numerous boulder fields to negotiate through. There are two places​
where we needed to fix ropes to both get down and to get back up, a​
section where we had to descend (and of course ascend on the way back) a​
steep exposed cliff side with a lot of loose rock. We took our time and​
thoroughly enjoyed it.​
​
There was a plentiful spring toward the bottom of this side canyon we​
entered from, so we base camped right where the side canyon joined French​
Spring. We spent one day hiking up, and one day hiking down, exited on​
the last day. Pure solitude, interesting geology, plenty of birds, and​
awesome scenery. There was another spring up canyon from where we camped,​
this had limited water and might be mostly dry soon (in other words don't​
count on this spring as a water source). There was no water to be found​
hiking down canyon. We did find some petrified wood fields in the chinle​
a mile or so down canyon from our camp.​
​
So basically not my cup of tea. But Happy is awesome. I haven't seen the narrows yet, sort of kicking myself about that.

We did explore Allen's route out of Happy to Big Ridge, it is feasible but requires some tolerance to exposure, I don' t think it would be fun with a pack.

I've watched all your videos several times. Thanks for typing this out, and showing us a little more. I'd love to do one of these big routes. Thank so much for sharing.

Here's a pic looking down into French Spring Fork from the alt route. This isn't my pic, we only got as high as the slickrock section in the lower right part of the photo. 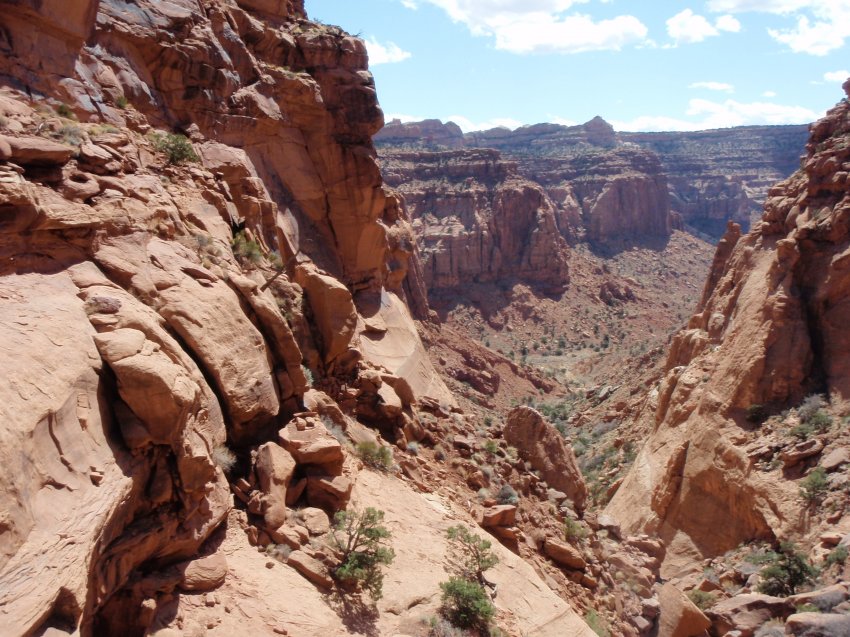 Man, that is one seriously insane trip! Thanks for sharing (and inspiring!). I can't wait to see what you do next year, and those photos from Capitol Reef have made me decide I'm going back next year even if I have to put the whole damn trip on a credit card That shot of the Waterpocket Fold is incredible!

Digging this full trip report and the maps... ohhhh the maps! Picking through these bit by bit. Loving it. I'm through part 1 and 2 now. Part 3 tomorrow.
IG: @backcountrypost

Great route! How long did this take you to complete?

sixstringsteve said:
Great route! How long did this take you to complete?
Click to expand...

Thanks. It was 18 days -- though the 1st and last day were 1/2 days. I'd probably be able to shave off 1 day per week if I didn't have to keep going back to pick up my camera/tripod!

The delay in the Henrys cost me an extra day wandering around the Maze and Water Canyon. Then a slow go up to and over Hatch Point revised my route to bypass Behind the Rocks. But... since I was just there 6 months prior I was ok with skipping it this time. So... even though the itinerary slightly changed, the overall schedule remained intact.

- Jamal
www.AcrossUtah.com
You must log in or register to reply here.
Similar threads