I do not know what is wrong with me. In June of 2020, January of 2021, and June of 2021, I was up on the top of Kaiparowits Plateau and I told myself - Never again! The water was unreliable, the springs were spaced to far apart and the water tasted HORRIBLE. Then you have those little biting flies or gnats that make you want to go screaming off through the sagebrush. Then there is that god awful climb, start at 6,000 feet and in a 1/2 mile crest out at over 7,000 feet. Nope I said, been there, done that, got the bug bites to prove it!

What started this was that one day after work I read a single sentence about a stock trail going through a spot called THE GOLDEN STAIRS. So, with hours and hours of research I was able to expand that single sentence to 4 sentences.

An old pack trail started at or near Coyote Wells and climbed to the summit. It went through a spot called the GOLDEN STAIRS. The GOLDEN STAIRS were made by dynamiting out a sandstone ledge giving stock a way up. Hmmm, that is only three sentences....oh, well I guess that is enough.

After driving from my home in Northern California, across Nevada, through a springtime snowstorm, into Utah, to Escalante, down Hole-in-the-Rock road, down a faint spur road, I am as close as I was going to get to Coyote Wells in a car. 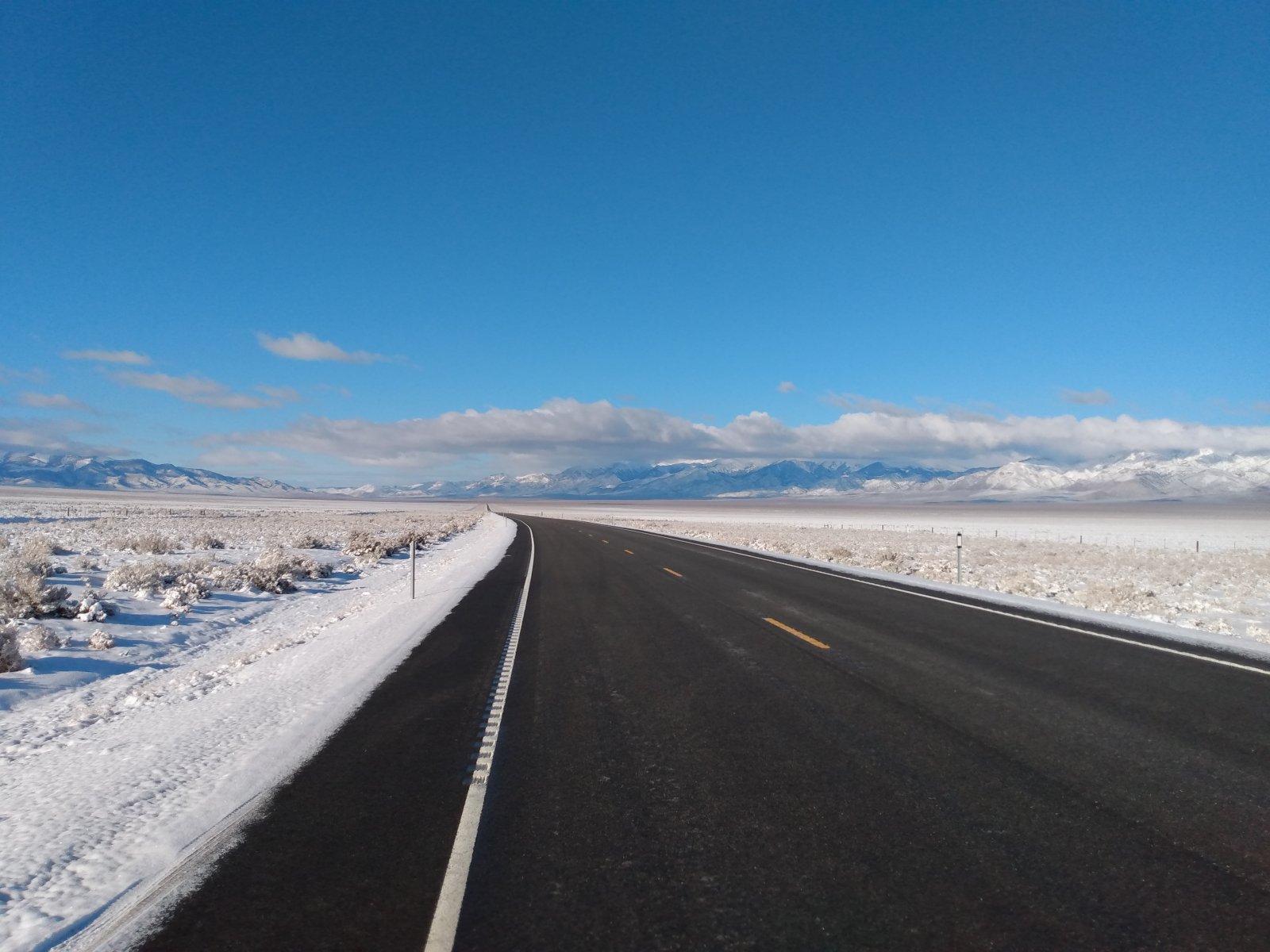 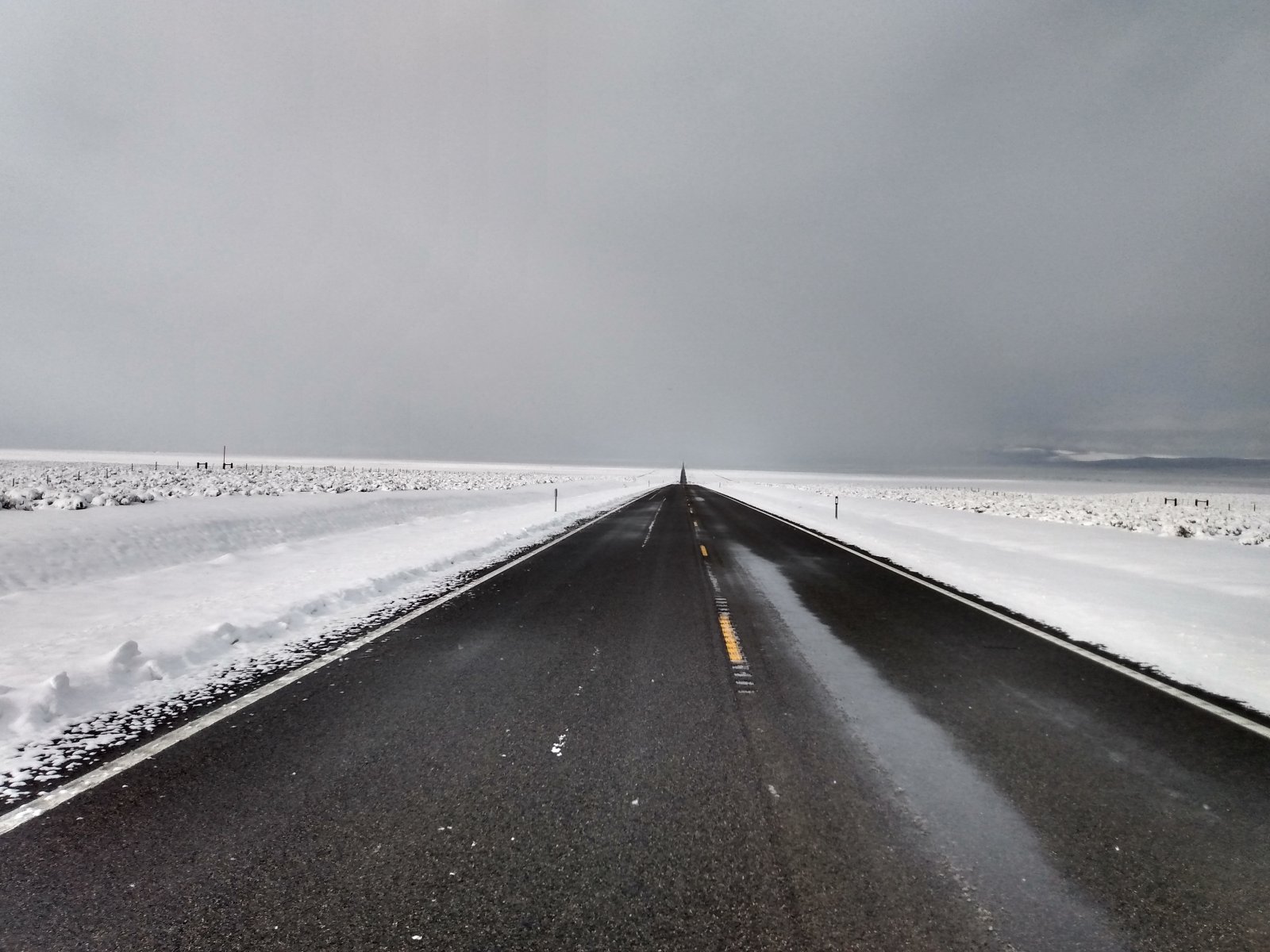 Soon I was at a spring at the base of Fifty Mile Bench. Unmarked on my maps, perhaps it is Coyote Wells, regardless I am weighed down with 16 lbs of water and certainly do not need any more water, so I start ascending Fifty Mile Bench. I see no sign of a defined trail and there is nothing on any of the maps that show a trail either, as I near the top I follow a short section of what appears to be a trail along a ridge for a couple of hundred yards before it fades out into the sagebrush on the bench.

I keep following what feels like the natural path to the base of the Straight Cliffs. I am veering off to the left somewhat but since I have no idea where the trail is it doesn't really matter which way I go. Suddenly, there appears to be a small cairn, then a little further on, two more. Then, just like that, I am at the trail at the bottom of the Straight Cliffs. I cannot believe my luck!

Up I go about 3/4 of the way where you come across some cool rock art and soon afterwards I am climbing up through a notch in the sandstone with some man-made steps and I assume this is the GOLDEN STAIRS (imagine heavenly music if you wish) and after one more steep section I am at the top!

I setup camp nearby and then proceed to spend the next two days in a futile attempt trying to find a trail out of the canyon on to the Plateau. The trail winds it's way southward climbing an arm of the canyon but I lose it under the snow that is covering the head of the canyon. 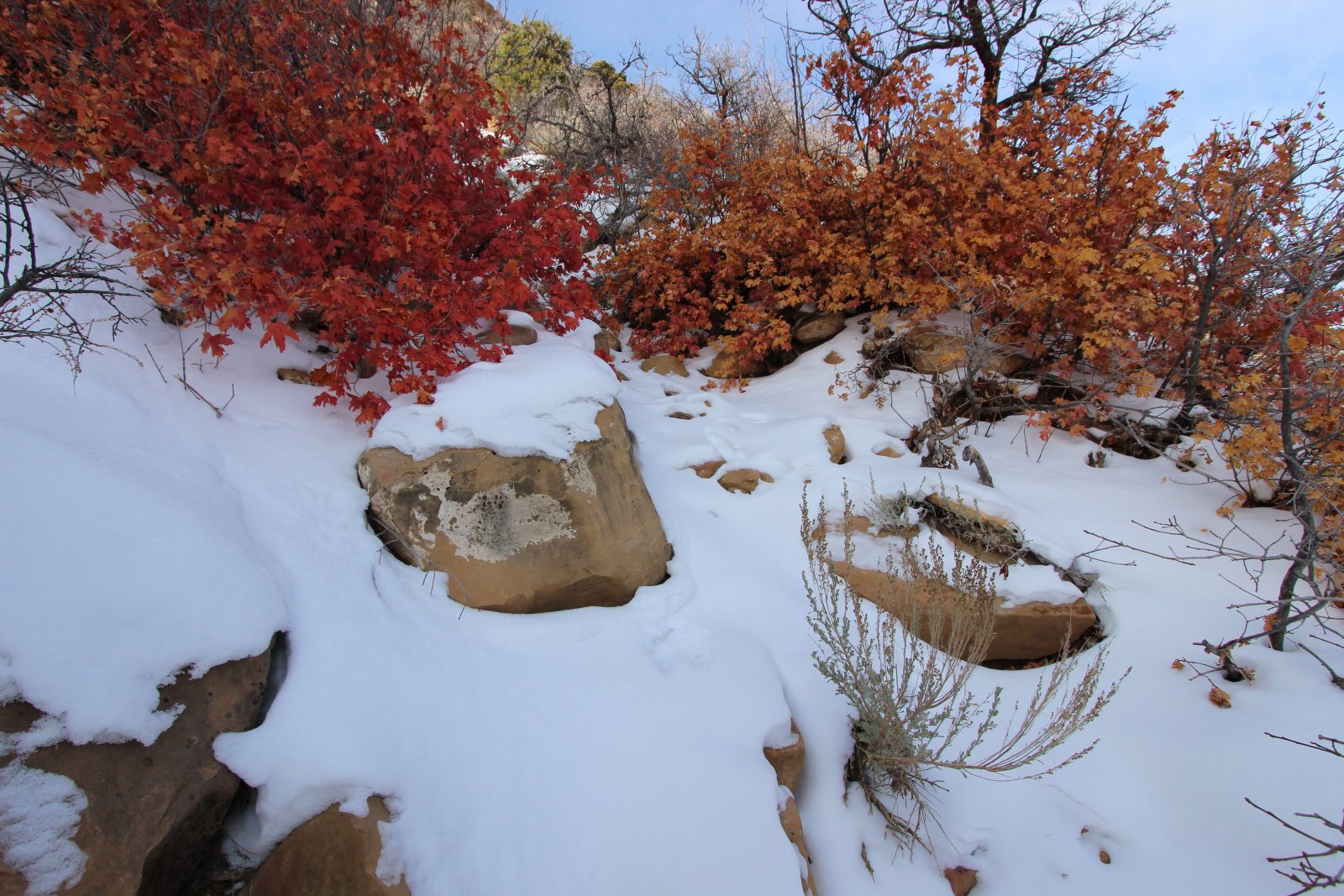 I try a half-dozen different ways each day but am unable to find the trail under all that snow that will take me through the last ledge and to the top. After two days I give up and retrace my route. Going back down the steep section, through the GOLDEN STAIRS, past the rock art, past the cairns, down the ridge with the short trail and I take a break before reaching the spring.


ROCK ART ON THE STRAIGHT CLIFFS 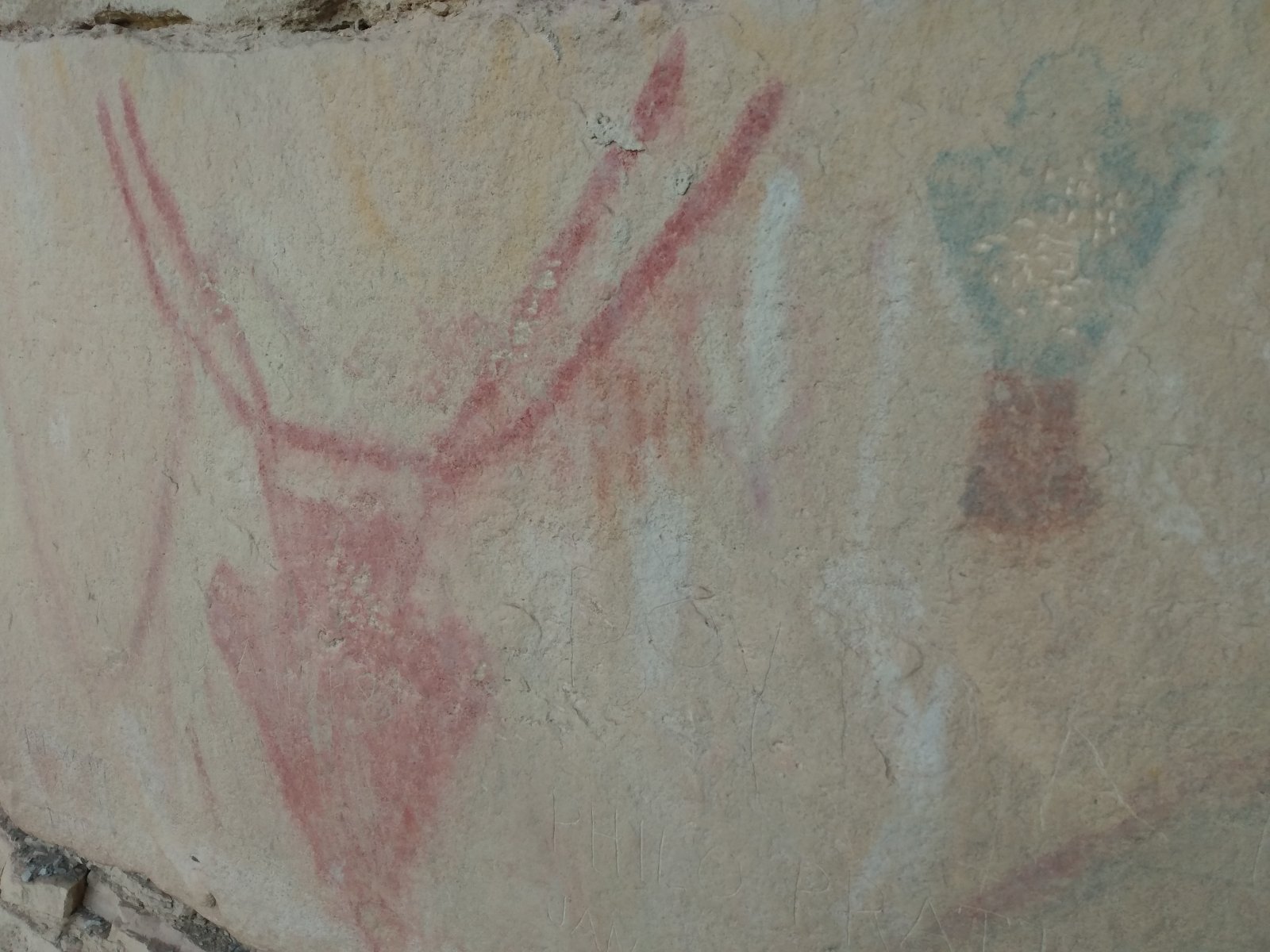 After spending time snacking and hydrating and enjoying the views it is time to head out. After 15 minutes I go to stand up and I use the rock next to me to get my 60 year old butt off the ground when something catches my eye. Well, look at that! Here at over 5,000 feet above sea level, in a desert, is a sharks tooth! 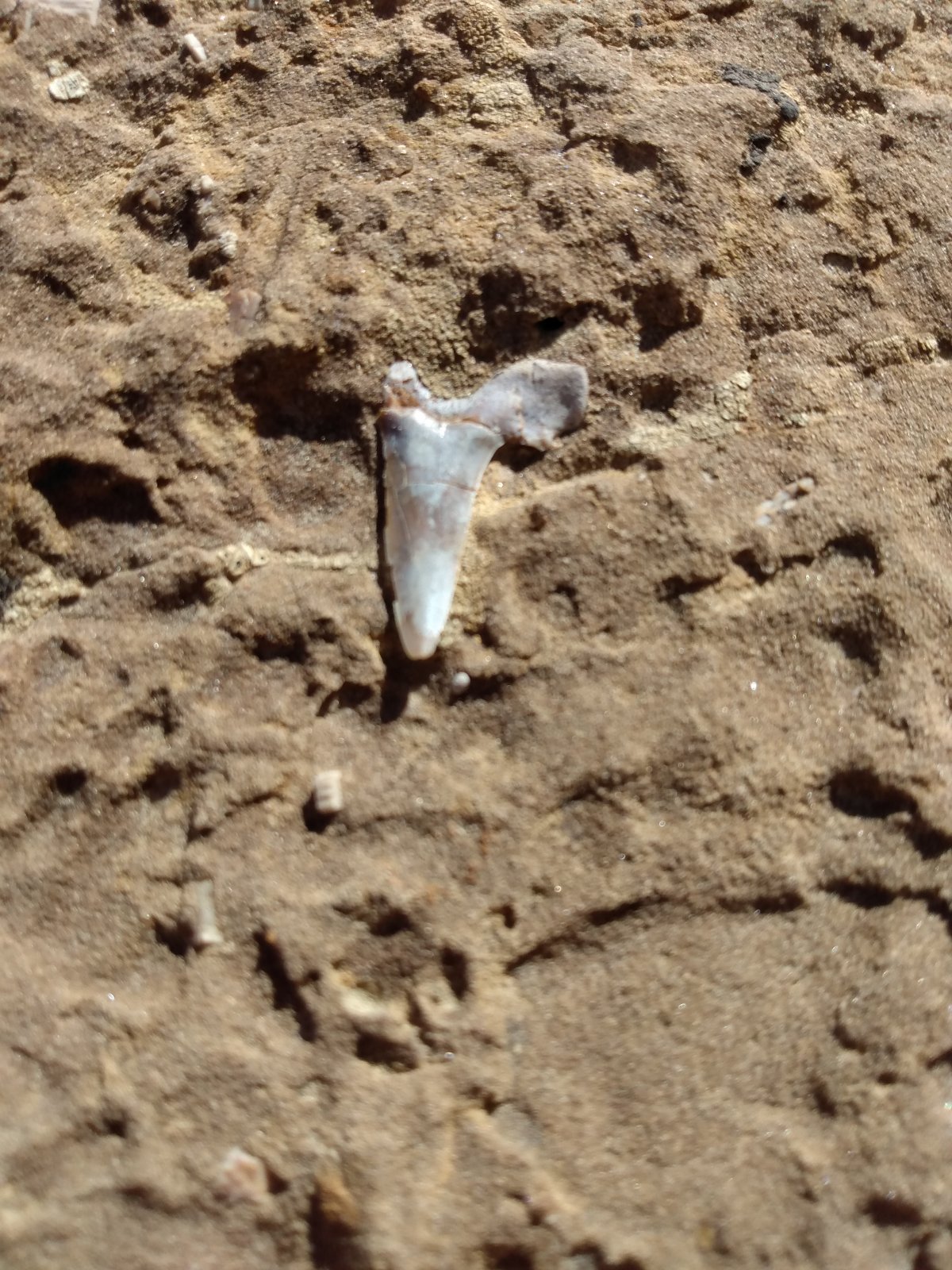 What is this? A fetish? An Idol? A cool looking rock? What do you see? 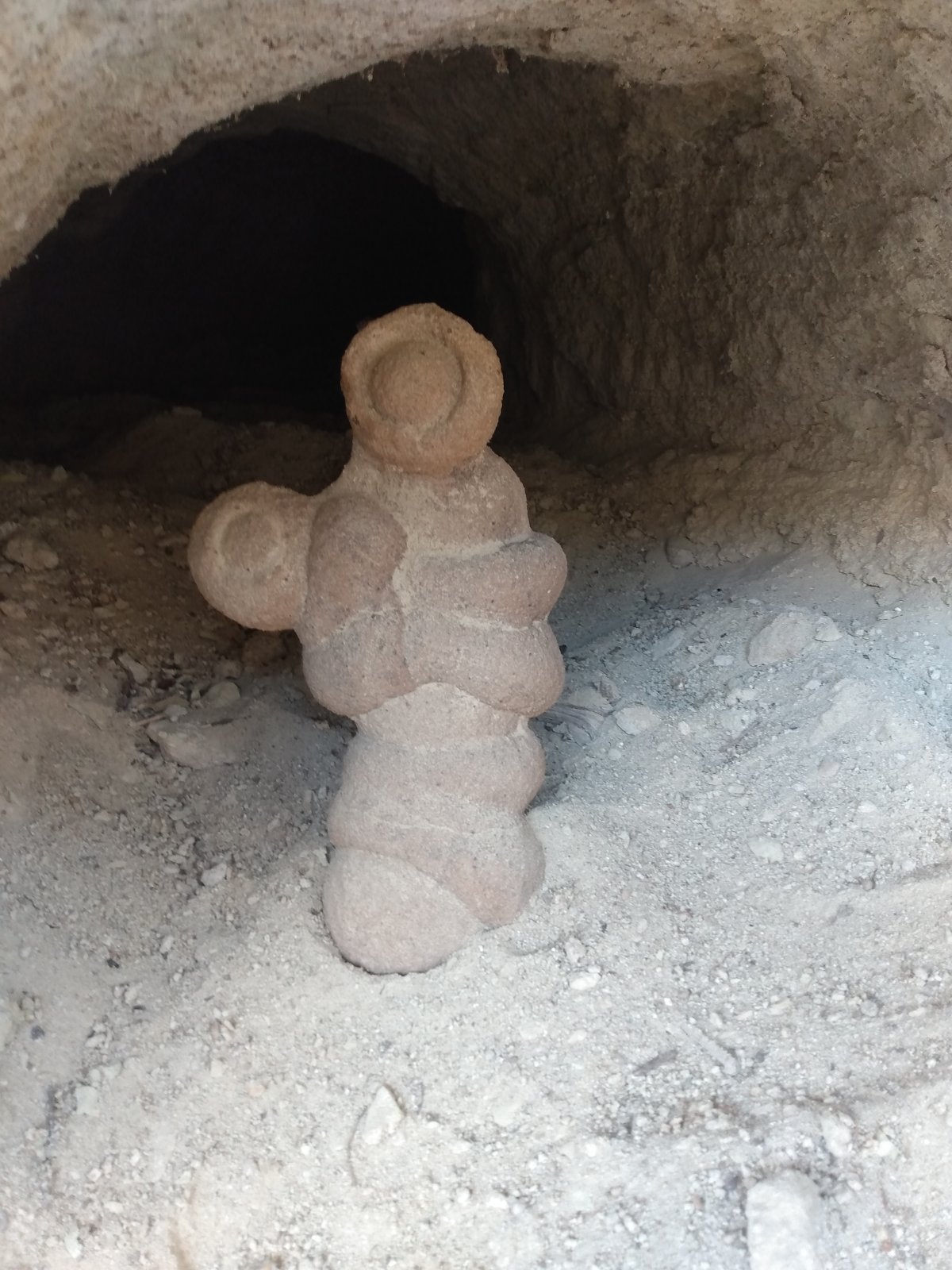 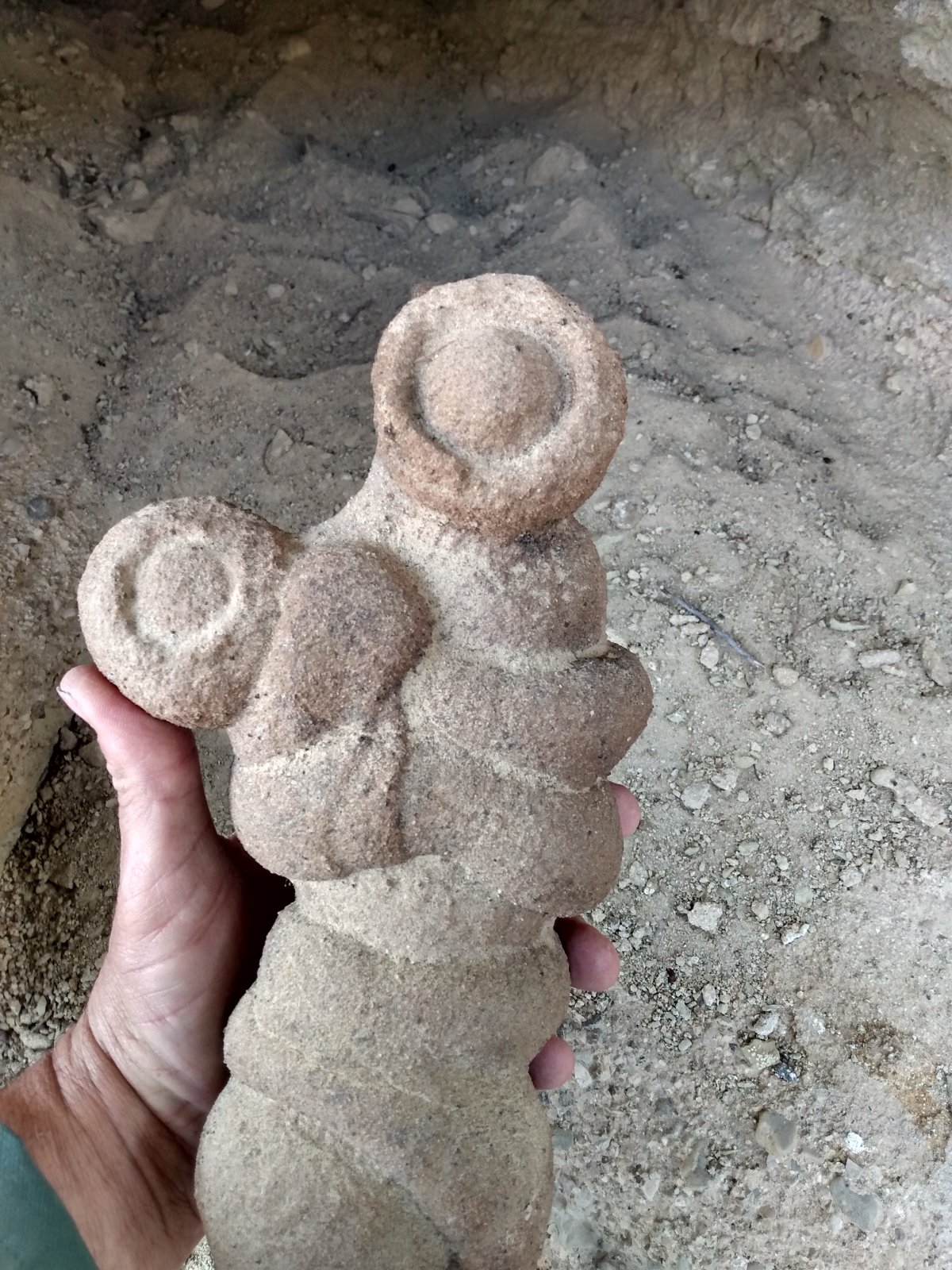 After marveling at it for a little while it is time to head back to the car where I try to salvage the trip by going to check out a couple of sites including the COSMIC NAVEL/ASHTRAY, Chimney Rock, Batty Pass Cave, and such.. 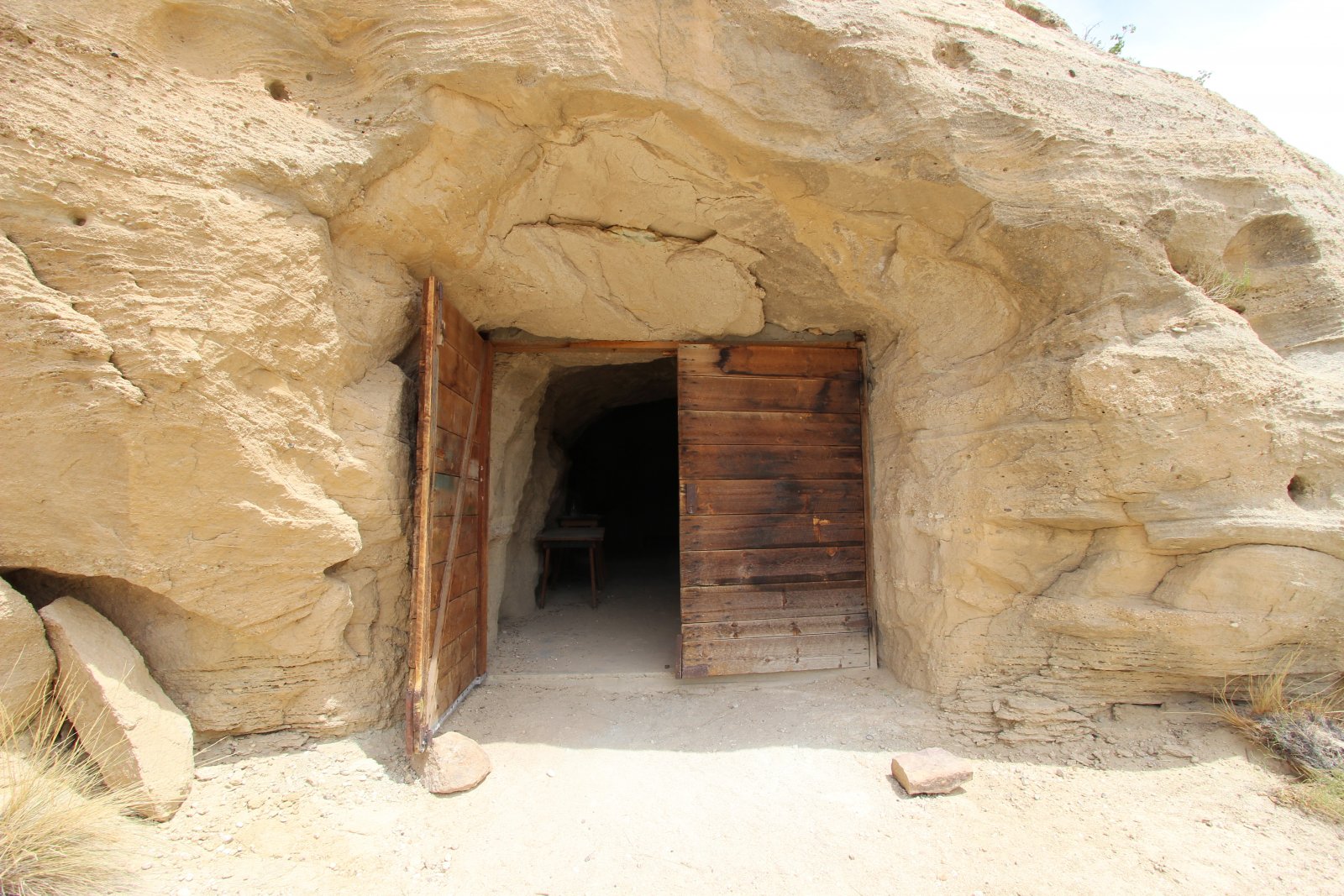 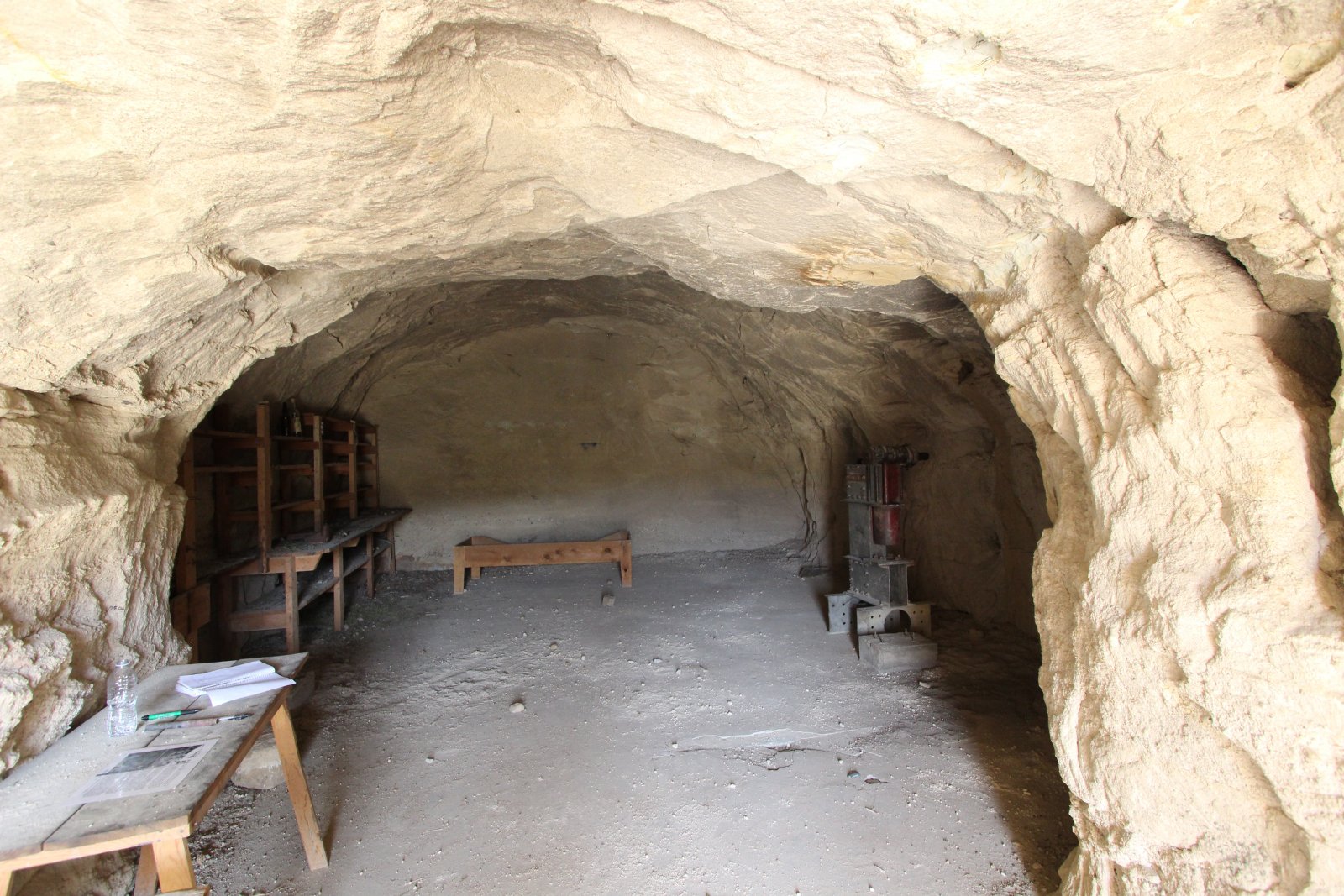 AETSCHI BAETSCHI TOWER (See all the snow on the Straight Cliffs in the background?) 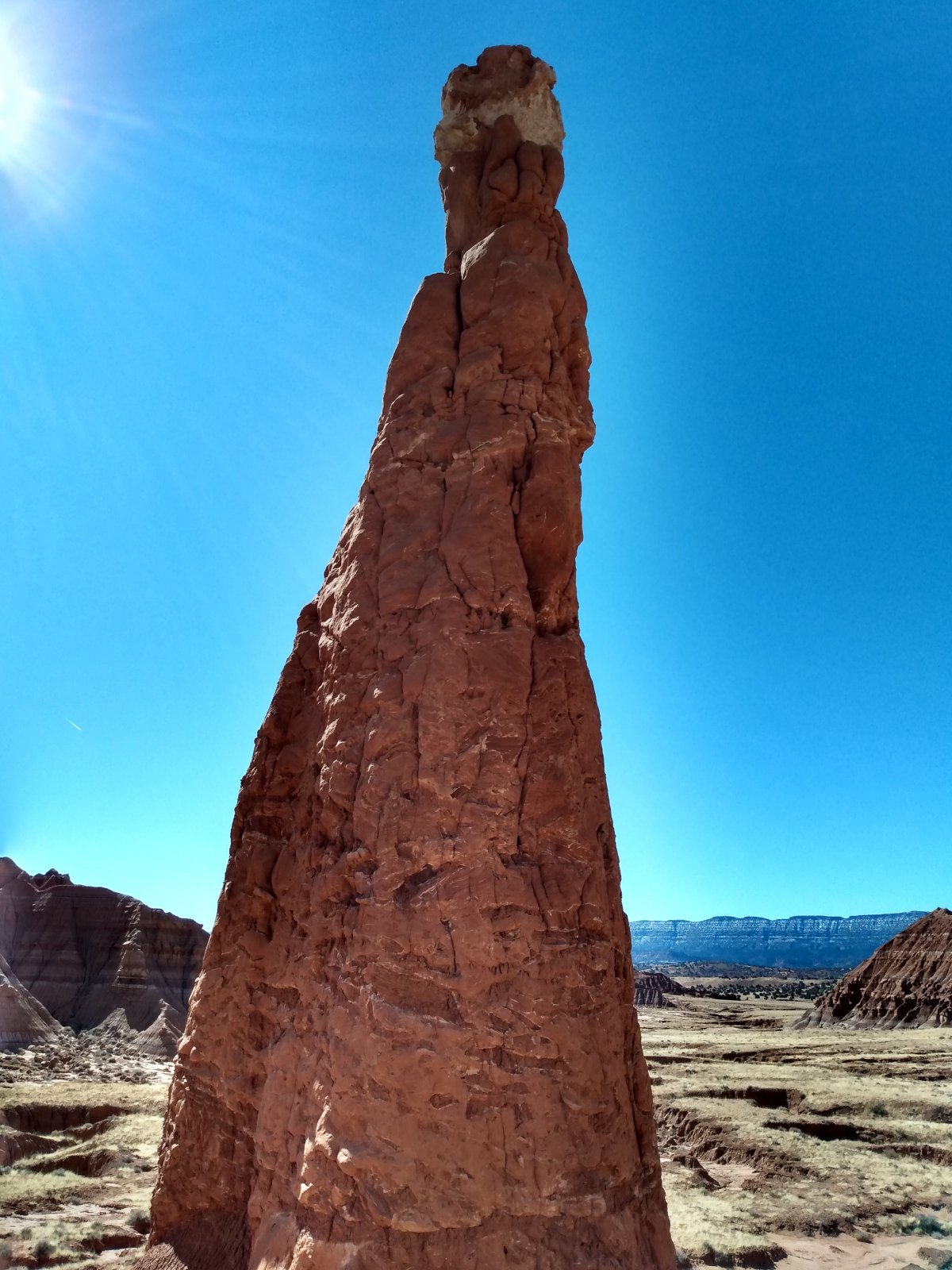 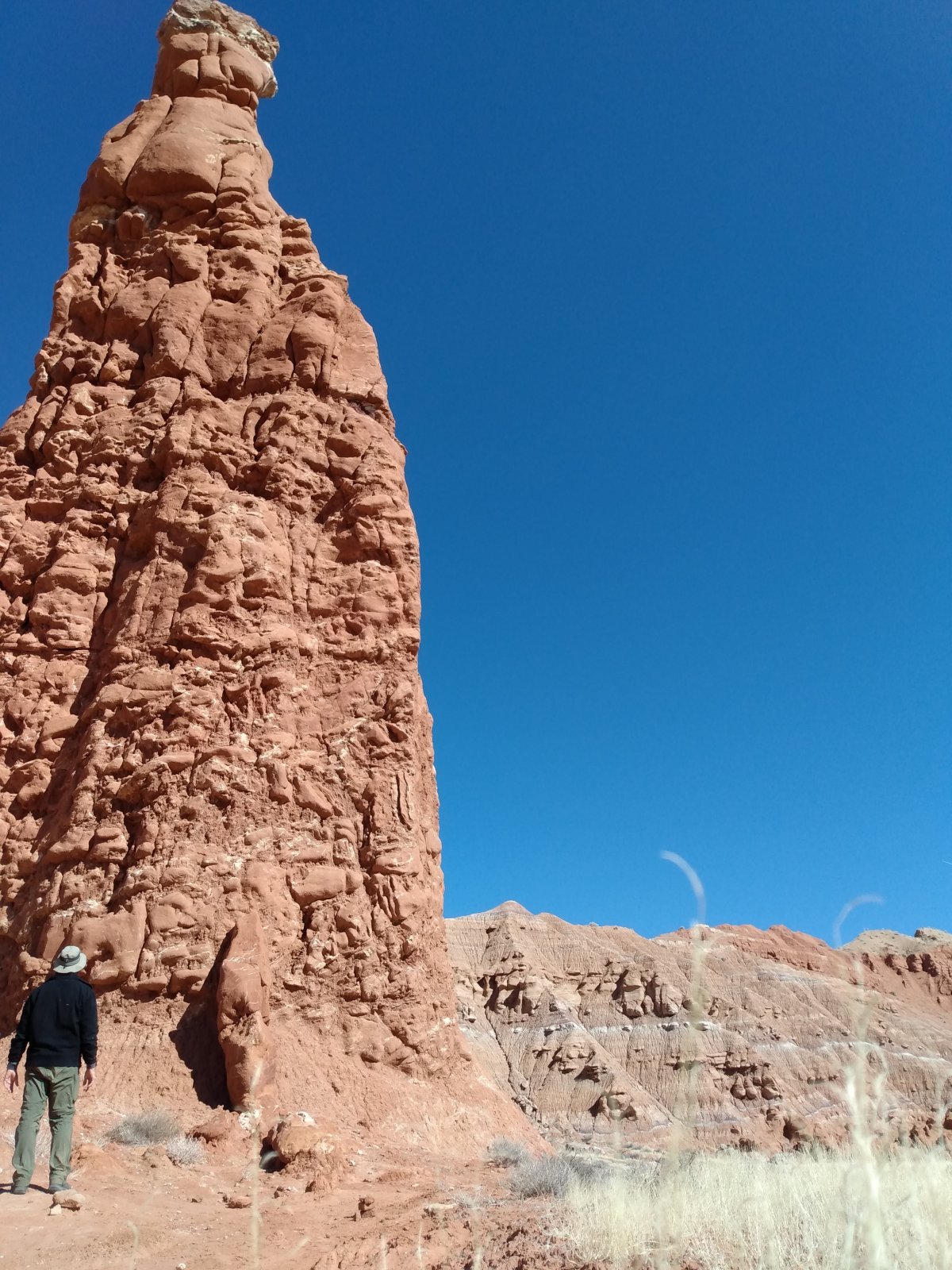 Most people miss out and drive right past Dance Hall Rock and if they even do stop at it is usually just to hear the echo in the Ampitheater area, but if you climb up to top there are giant potholes up there and around on the sides there are historic carvings in the rock. 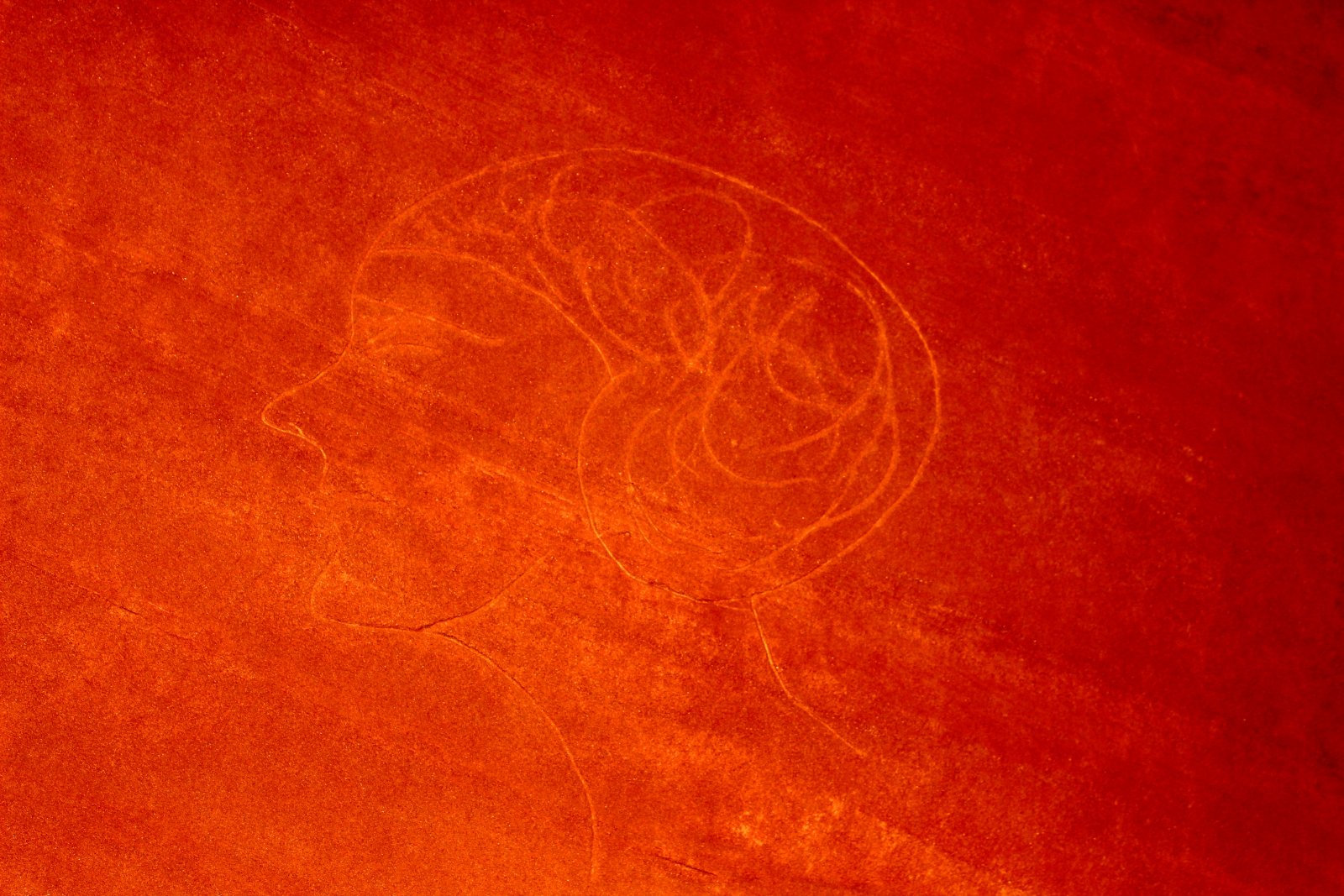 RUINS ON THE STRAIGHT CLIFFS 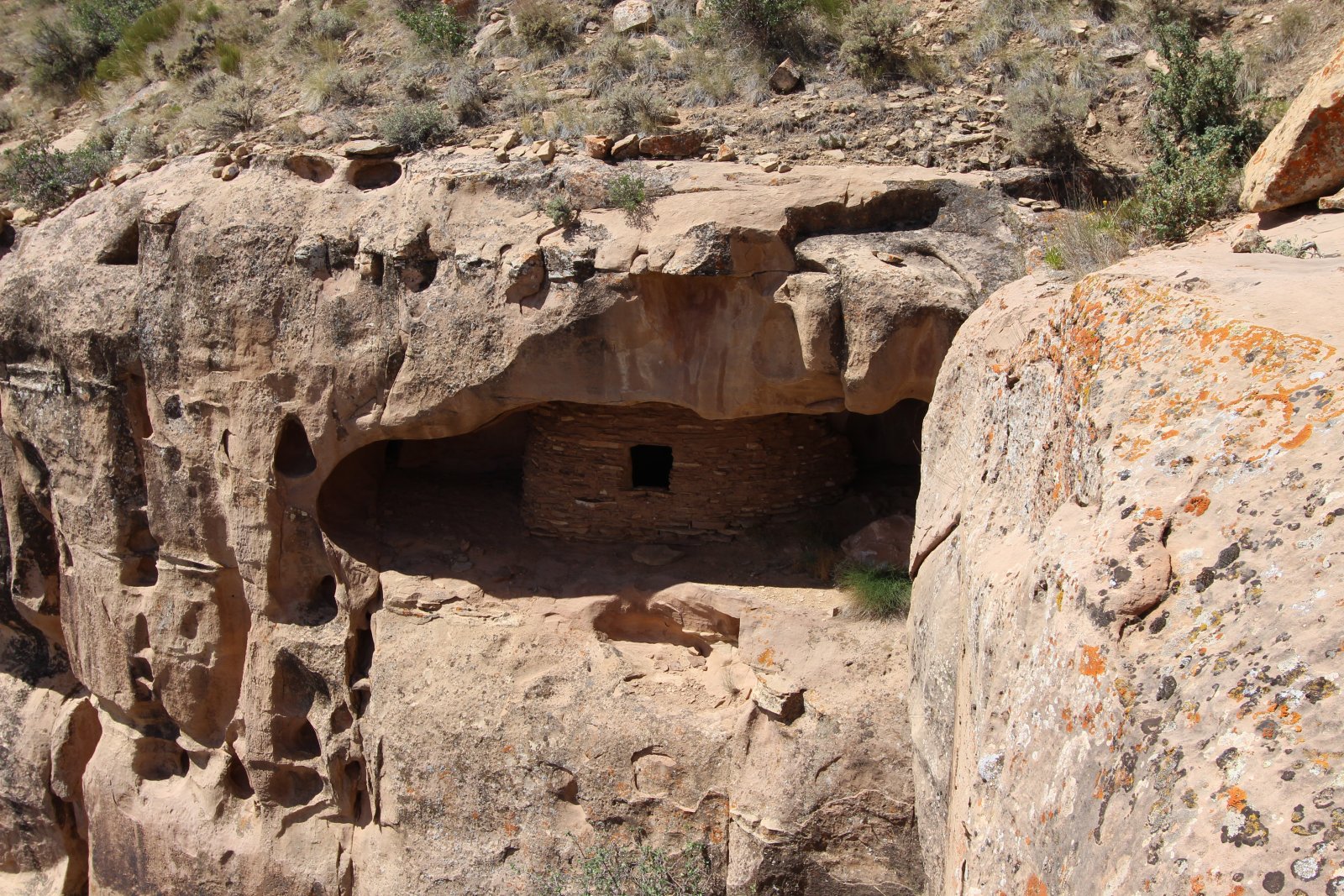 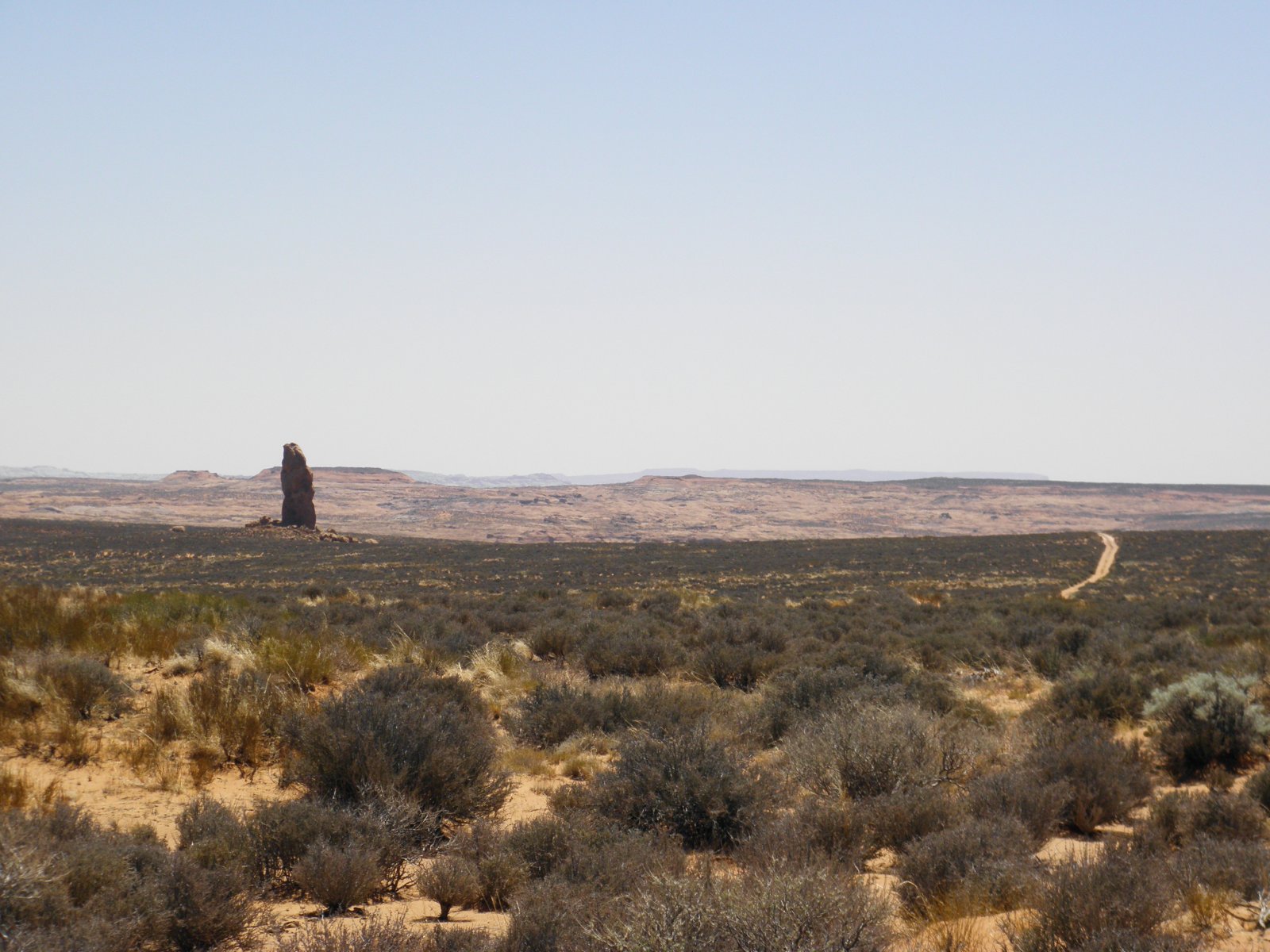 One of the dozens of names scratched into Chimney rock 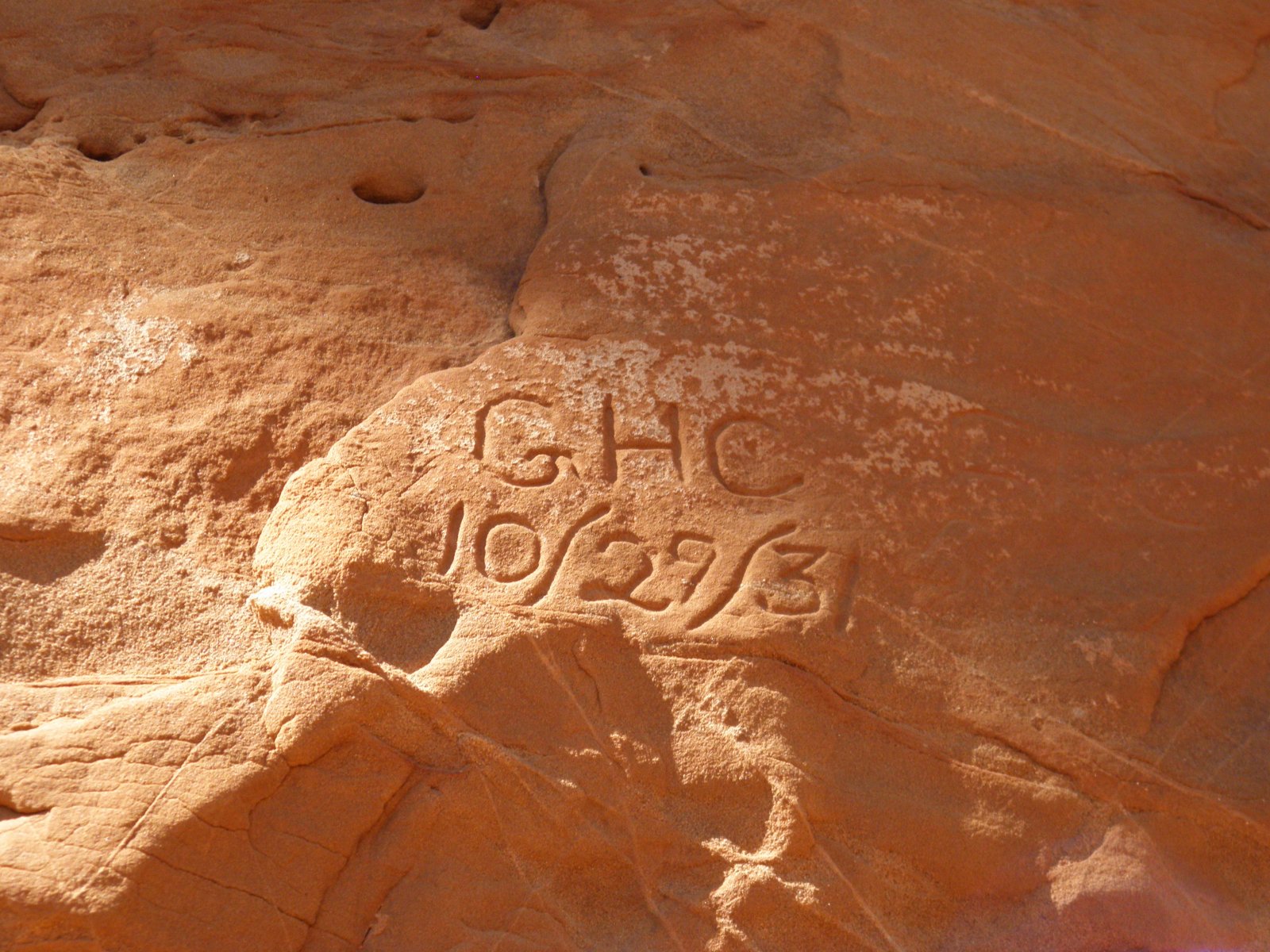 Then it is back across Nevada, into California, up the driveway to home. I unpack, take a shower, do laundry, go to bed only to wake the next morning just to go back to work.
Last edited: Sep 16, 2022

The shark tooth is a pretty cool find when you consider what that area looks like now.

I assume there were no bugs?
My trip reports: backpackandbeer.blogspot.com 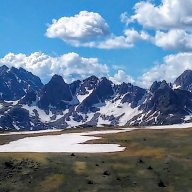 I have an old BLM map that shows 4 trails going through the Straight Cliffs, none of them are named. One of those could be your route but maps being what they are I can only guess which one. I may need to try 1 or 2 of those trails someday. Thanks for the inspiration.
Last edited: Sep 16, 2022
The finest workers in stone are not copper or steel tools, but the gentle touches of air and water working at their leisure with a liberal allowance of time. HDT

The Kaiparowits Plateau is such a strange place.​

I wonder if the sharks tooth is from the ancient western inland sea or if it was humped in from the coast a thousand years ago for trade. Sea shells were highly praised trade items. That fetish is an amazing work of art. It sure looks human made, mother and infant, but some natural formations look a little like that too.
F

wsp_scott said:
I assume there were no bugs?
Click to expand...

ZLmtns said:
I have an old BLM map that shows 4 trails going through the Straight Cliffs, none of them are named. One of those could be your route but maps being what they are I can only guess which one. I may need to try 1 or 2 of those trails someday. Thanks for the inspiration.
Click to expand...

I know of 4 trails, been up 3 of
them for the most part. The third is the one the hikers doing the Hayduke use. I have also some info on a possible two more.

I have heard of one by Batty Pass but just a mention of it.

Up on the plateau most of the trails are marked with very large cairns. Usually two of them about ten feet apart and five feet tall.

On one of my hikes I came across 2 such cairns in between the Lake and Middle trail, so maybe there are 6 trails.

From North to South you have Batty Pass, Upper, Middle, Unnamed, Lake, and Lower trails. With Batty Pass and Unnamed not being confirmed
F

The Kaiparowits Plateau is such a strange place.​

I wonder if the sharks tooth is from the ancient western inland sea or if it was humped in from the coast a thousand years ago for trade. Sea shells were highly praised trade items. That fetish is an amazing work of art. It sure looks human made, mother and infant, but some natural formations look a little like that too.
Click to expand...

On the sharks tooth I believe a shark lost it there. The rock it is in is good size, a bit larger than a basketball and you can see little bits of coral or something else in it.
F

On the fetish/idol/rock thing....
It was found in cave or hole in the side of a cliff. It is too small to be a cave but a hole in my mind goes 'down' and not 'back'.

Either way, it was in there about 18 inches and my thoughts on the day that I found it are...

That it was natural, not manmade or carved.
And...
That it was some big eyed bug creature.

It wasn't until I sent some pictures out that people said it was a mother and child and that is what I see now when I look at.

I still believe it is natural, not shaped or made by humans. 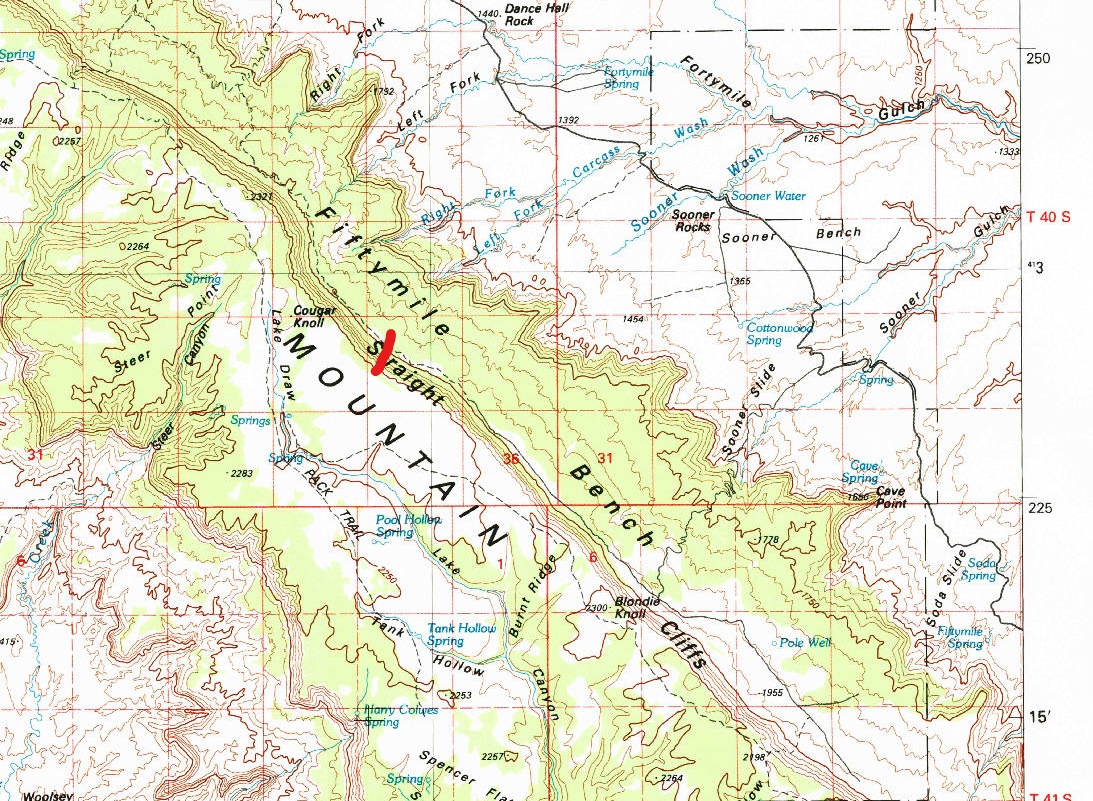 Last edited: Sep 16, 2022
The finest workers in stone are not copper or steel tools, but the gentle touches of air and water working at their leisure with a liberal allowance of time. HDT
F

That is considered by most as being the Lake Route and it is the easiest of them to reach.
You must log in or register to reply here.
Similar threads