The Bull Creek Hills, southwest of Calgary where ranch lands along the Highwood River meet the mountains. Limber pine, wind-raked ridge lines, and grassy meadows where cattle graze in summertime. 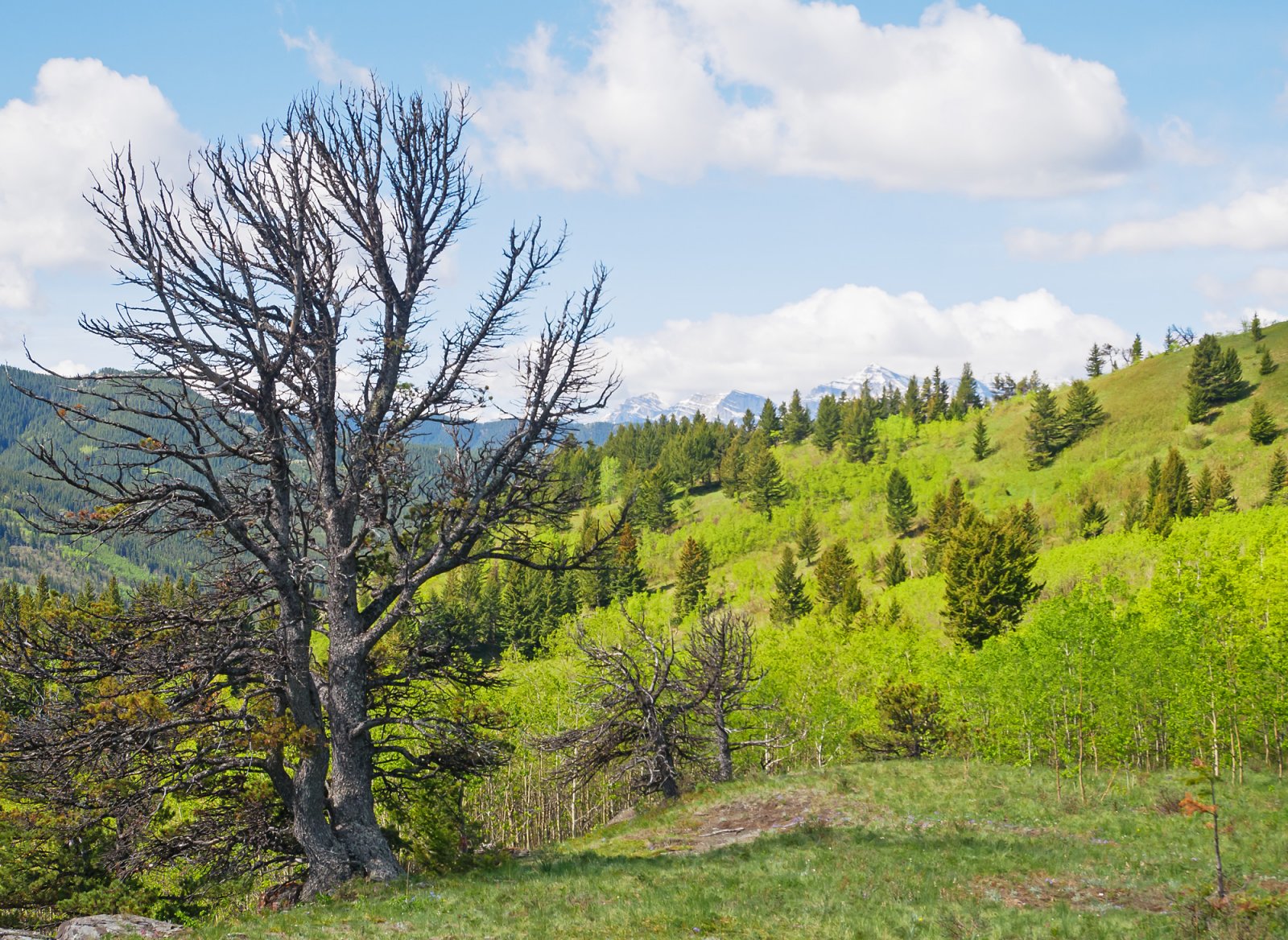 After setting up a car shuttle, as this was a one way traverse, our group of friends ascended a short distance to a low col where wildflowers crowded the stony ground.
Below, Cutleaf Fleabane (thanks Arnold for the ID) sway in the wind. 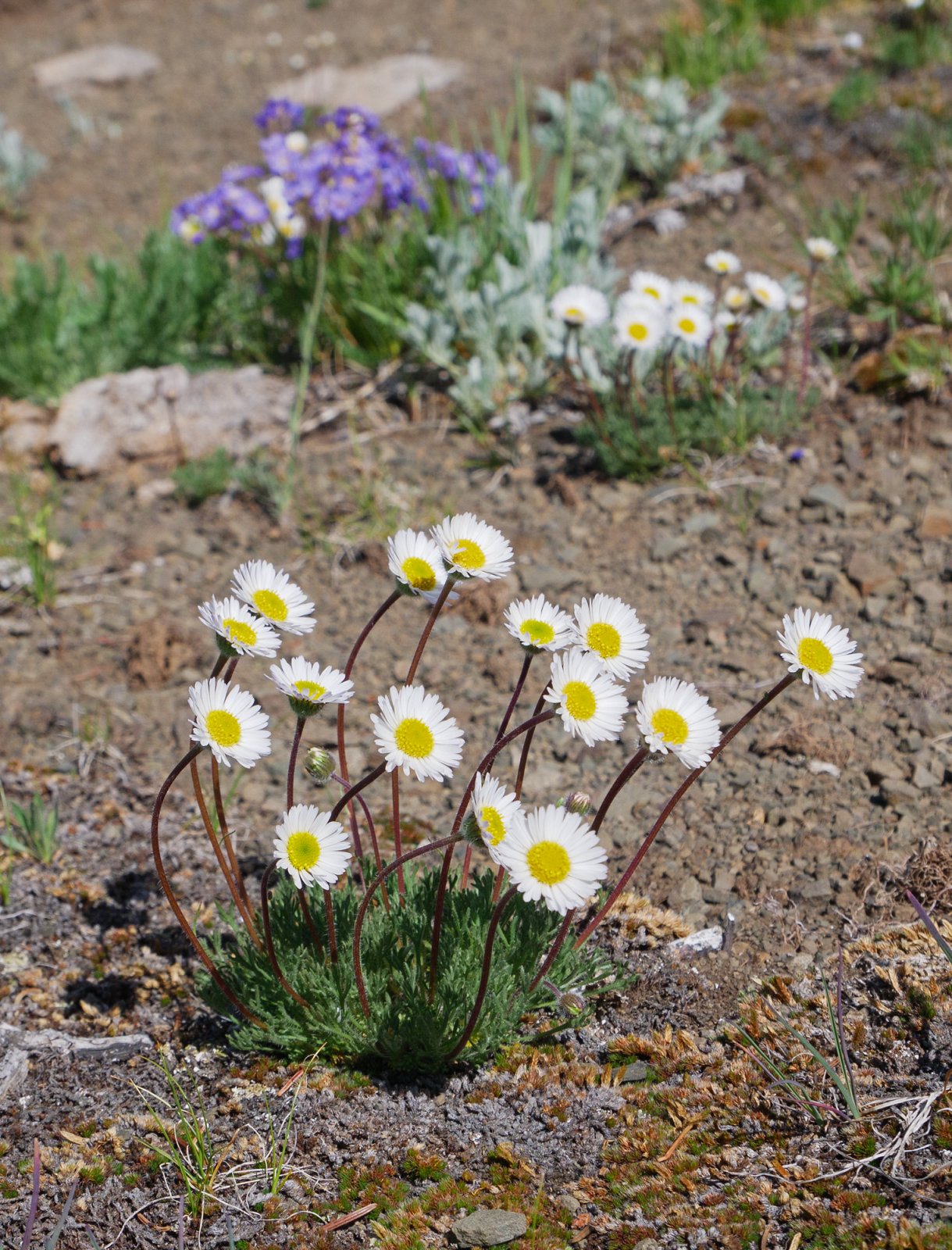 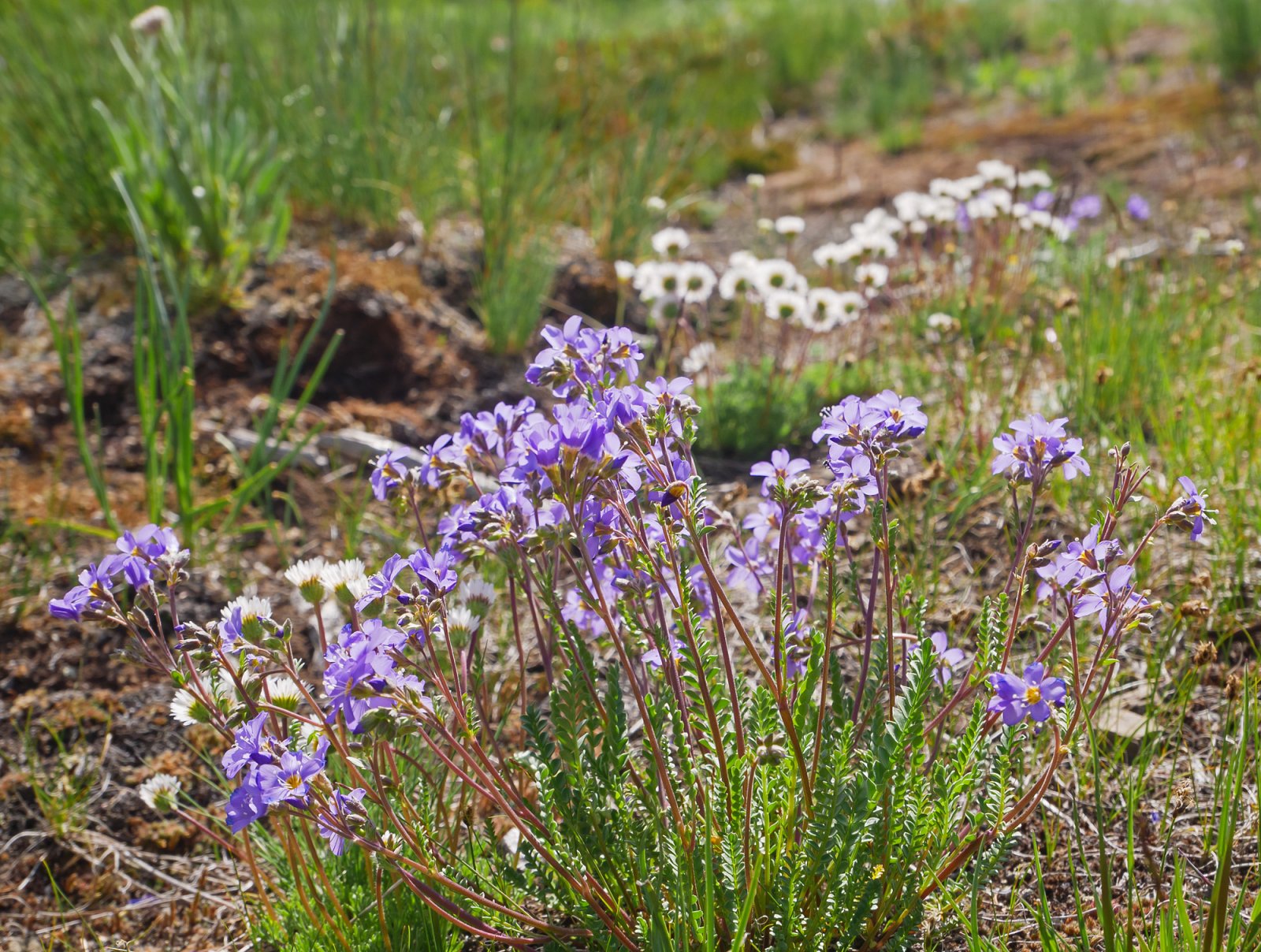 After losing a bit of elevation by dropping into a side stream, the real work began. The "hills" part of the name might be a bit deceiving, as there is a 780 metre height gain to the highpoint, and with all the undulating along the way, 940 metres of total elevation is gained and then lost along the route, which is not official but features beaten in trails for much of the way. 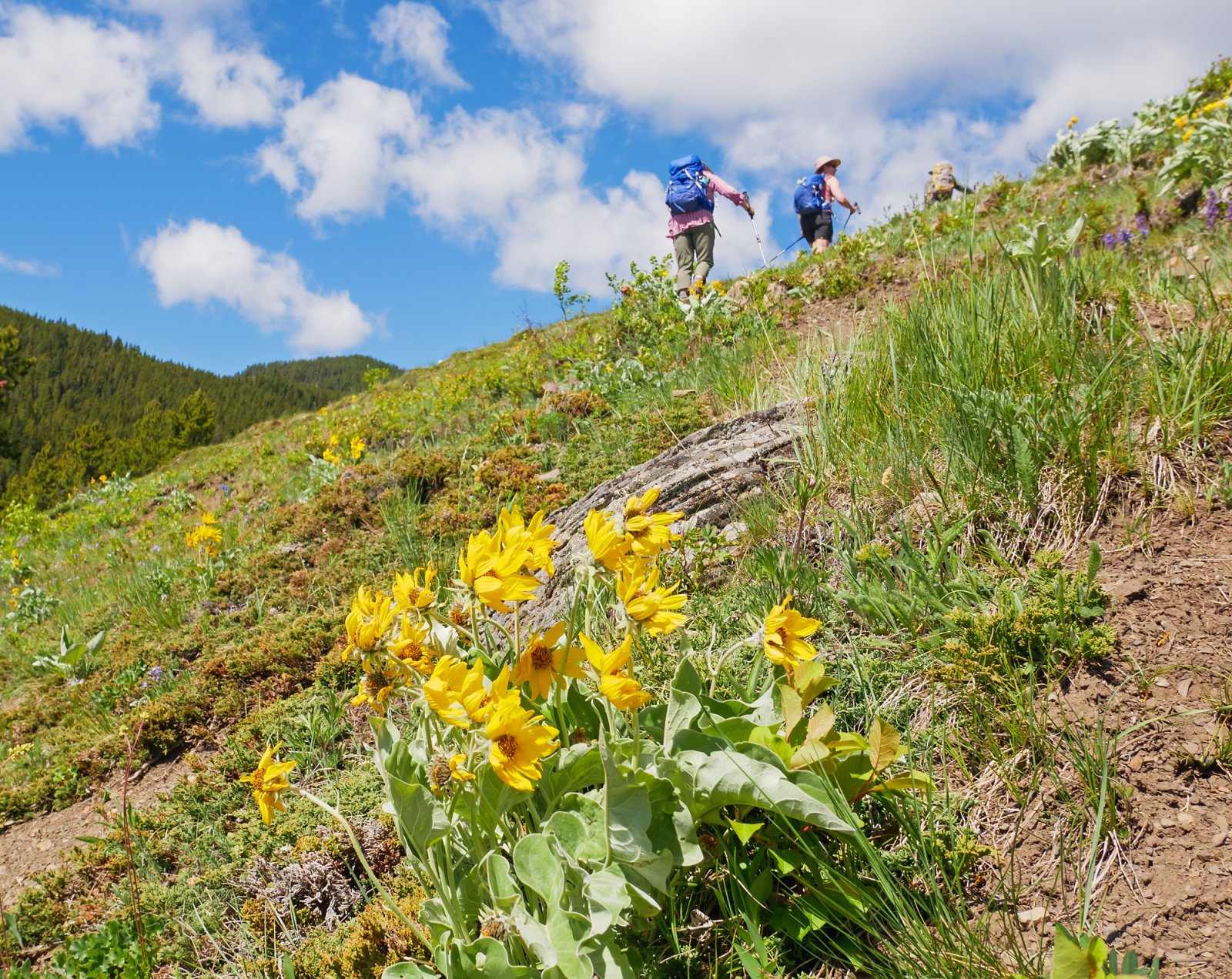 Grinding up the shoulder of the most easterly of the hills, after dropping down from the forested ridge in the background. 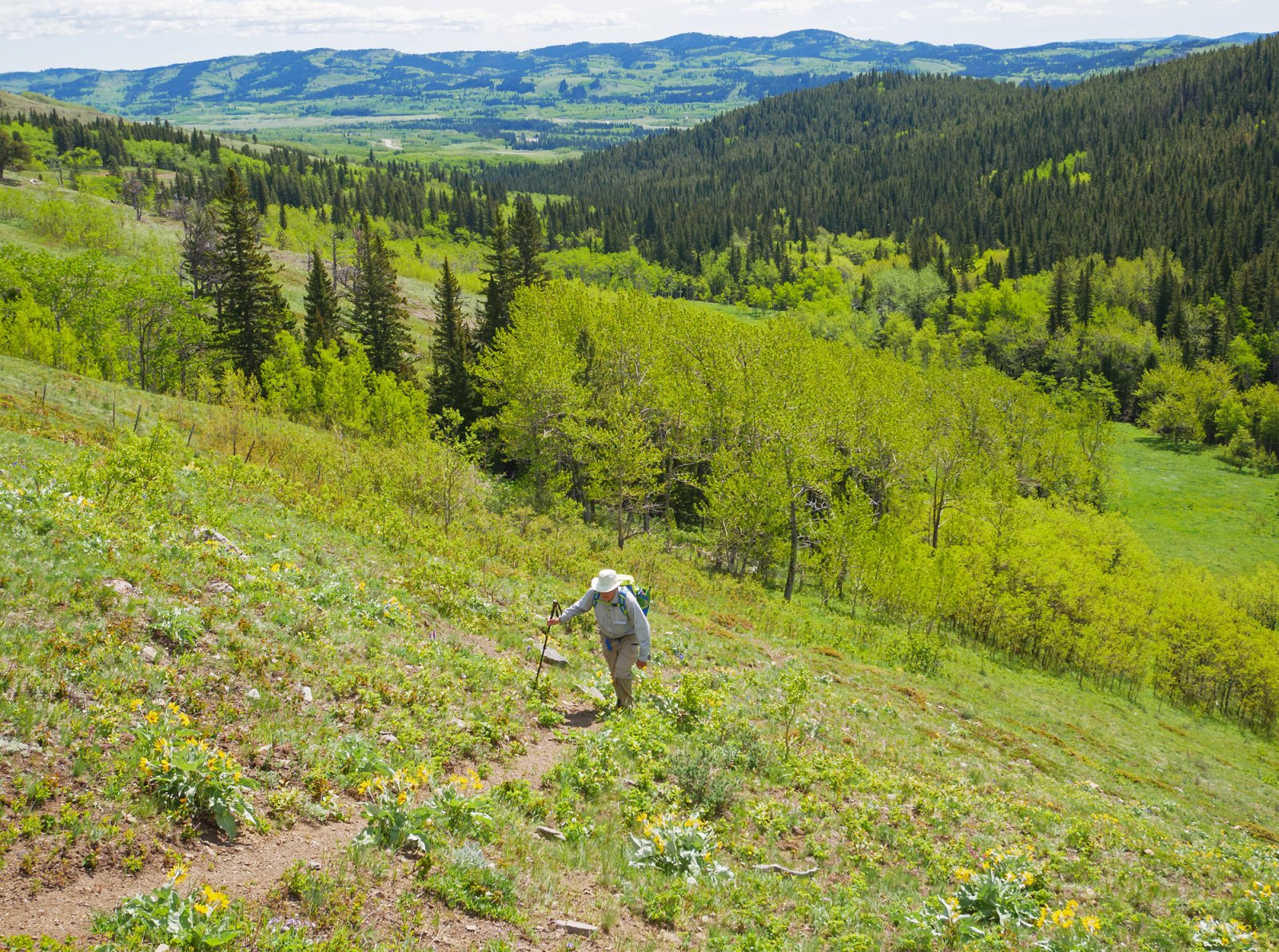 Abundant Balsam Root here, possibly the northern limit of their range in Alberta. 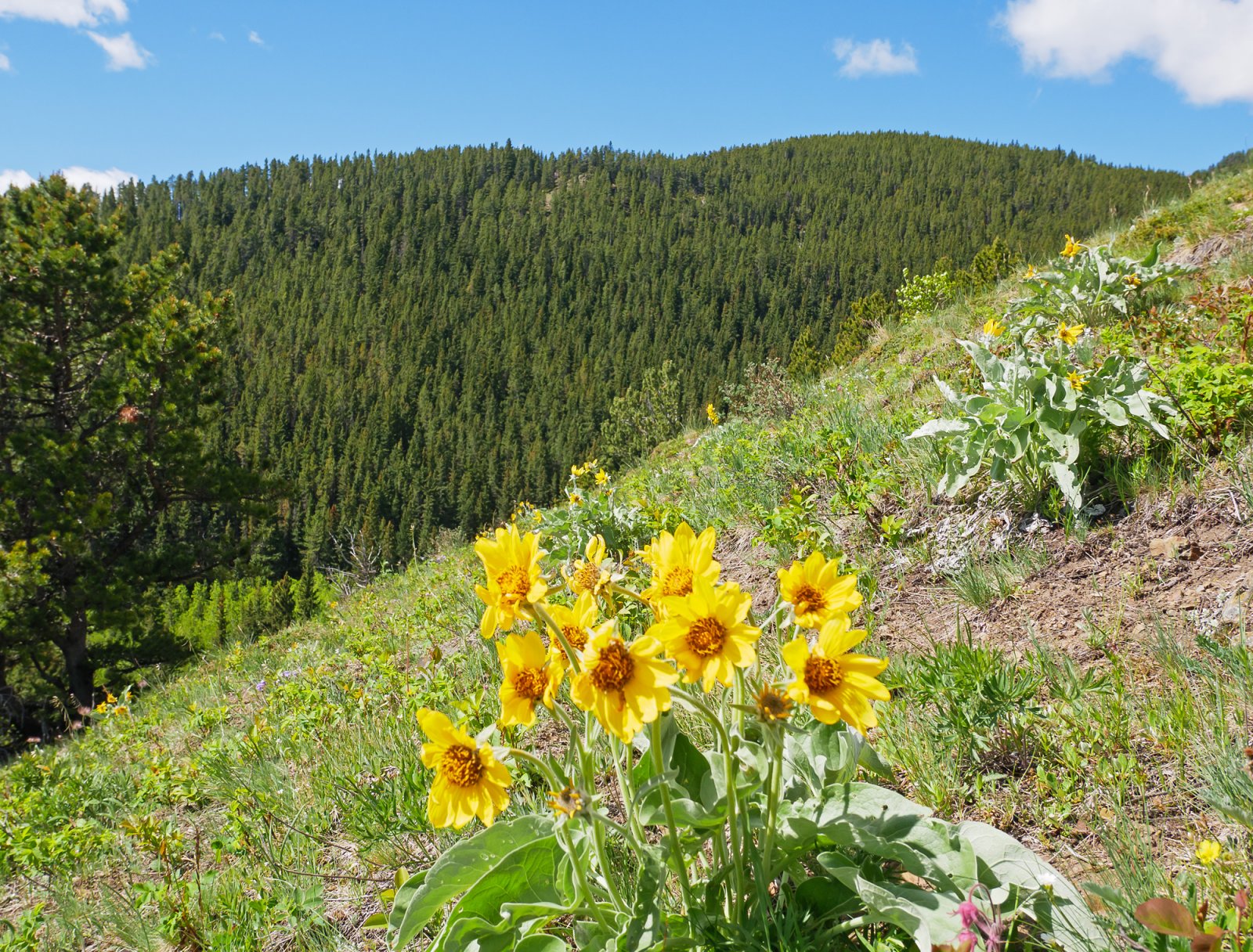 The feeling of walking through Forgetmenot filled meadows is hard to capture. I didn't hear anyone singing "the hills are alive..."though. 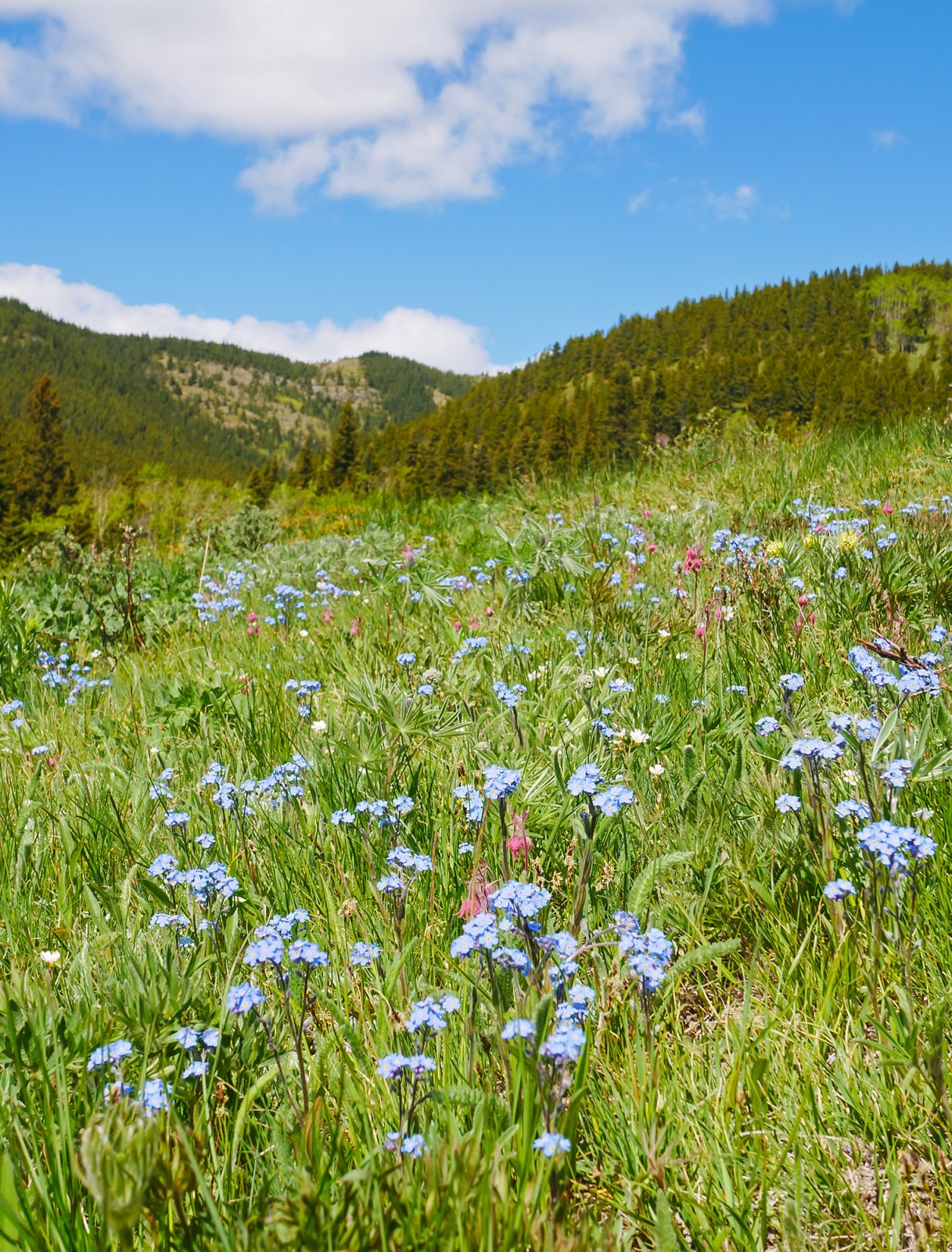 Another low col gave a brief respite from the steep uphill, where this very much alive aspen seemed to have just given up the struggle against the winds, and laid down for a rest. Today we had light winds, with only the occasional moderate gust. 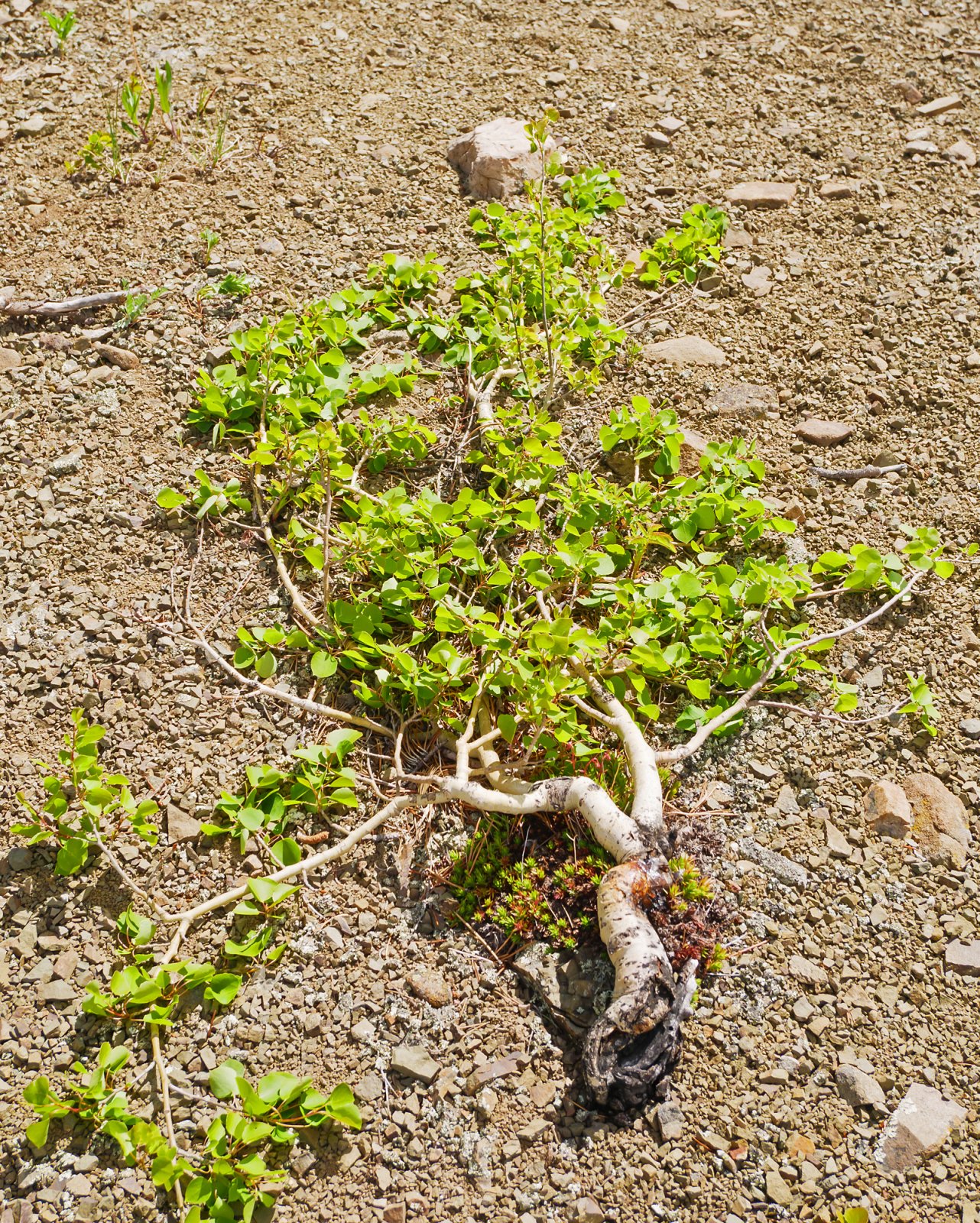 There's lots of Lupine along the ridge here, but just a few blooming after a cool start to summer. 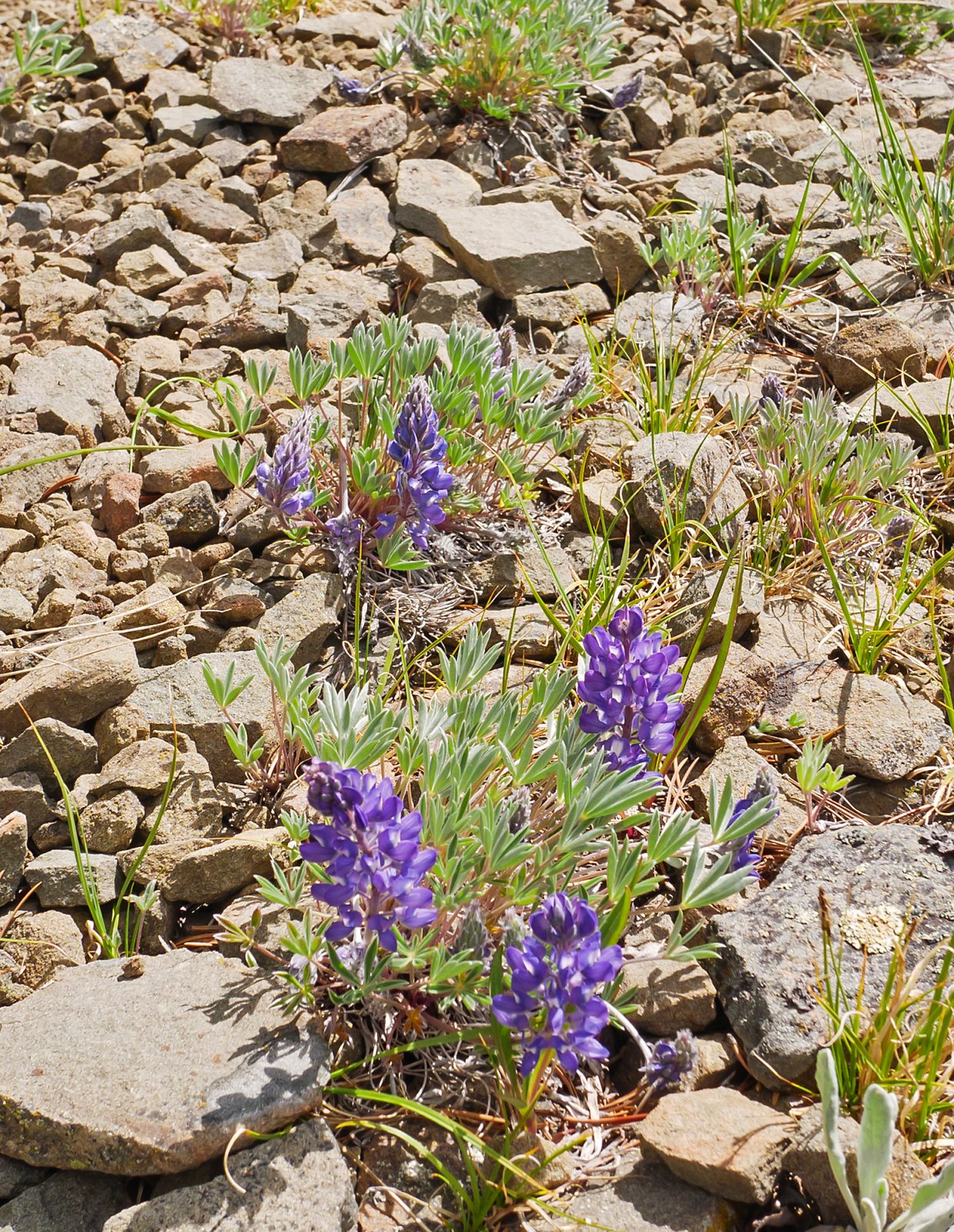 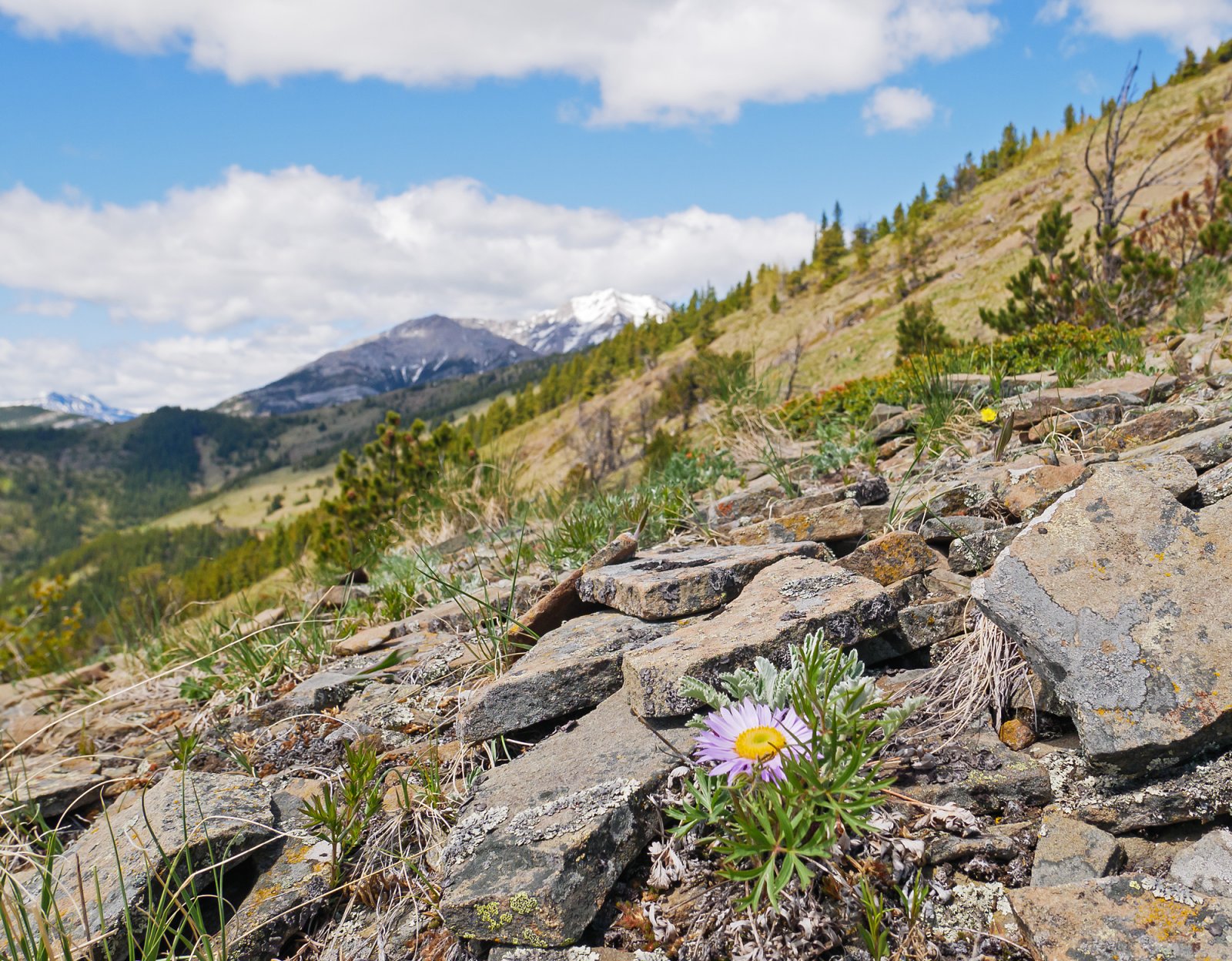 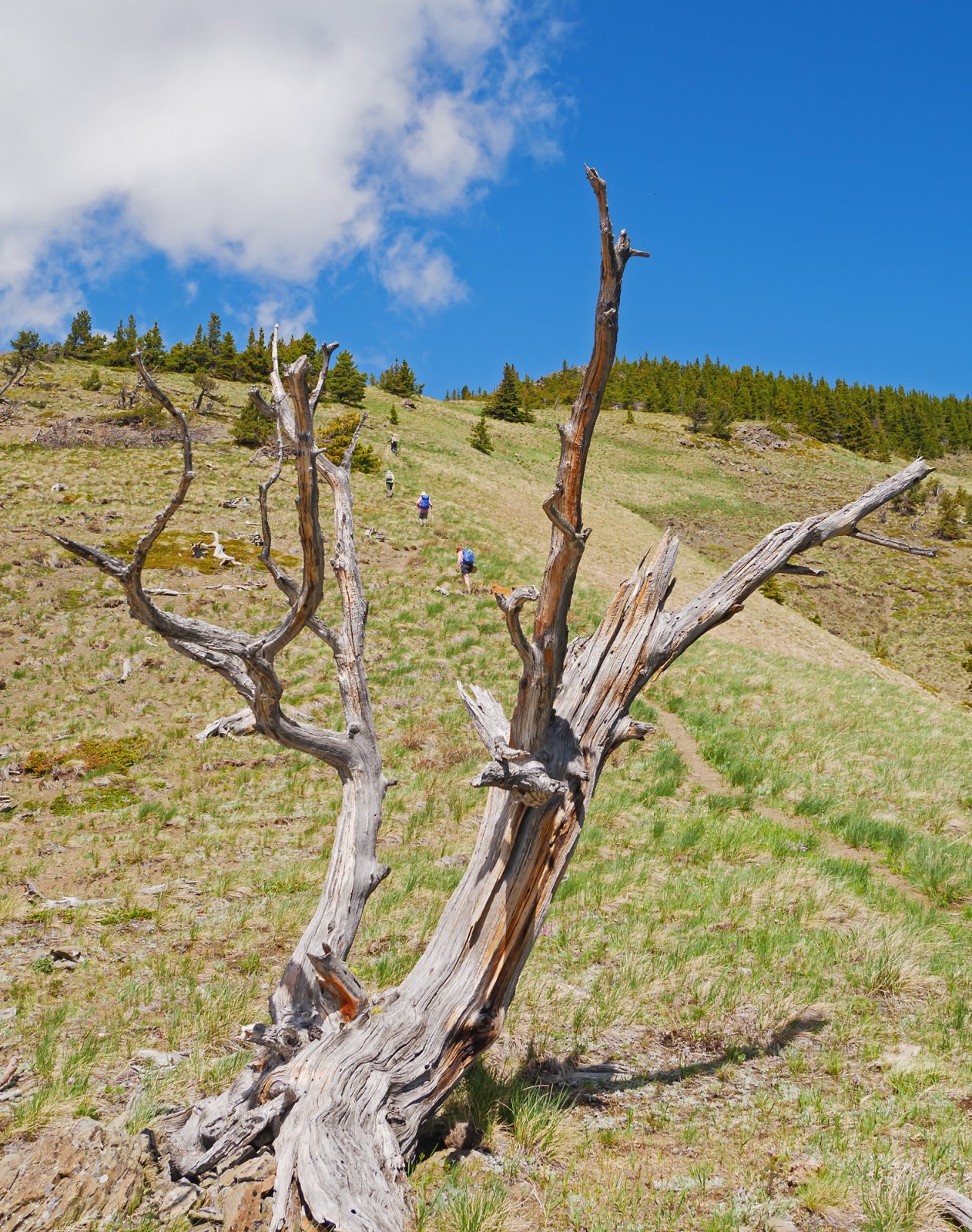 The Anenome (aka "Crocus") are particularly colourful in this area. The Bull Creek Hills are at the very edge of the mountains, with waves of foothills leading west to the snowy peaks of the Alberta-BC border in the distance. 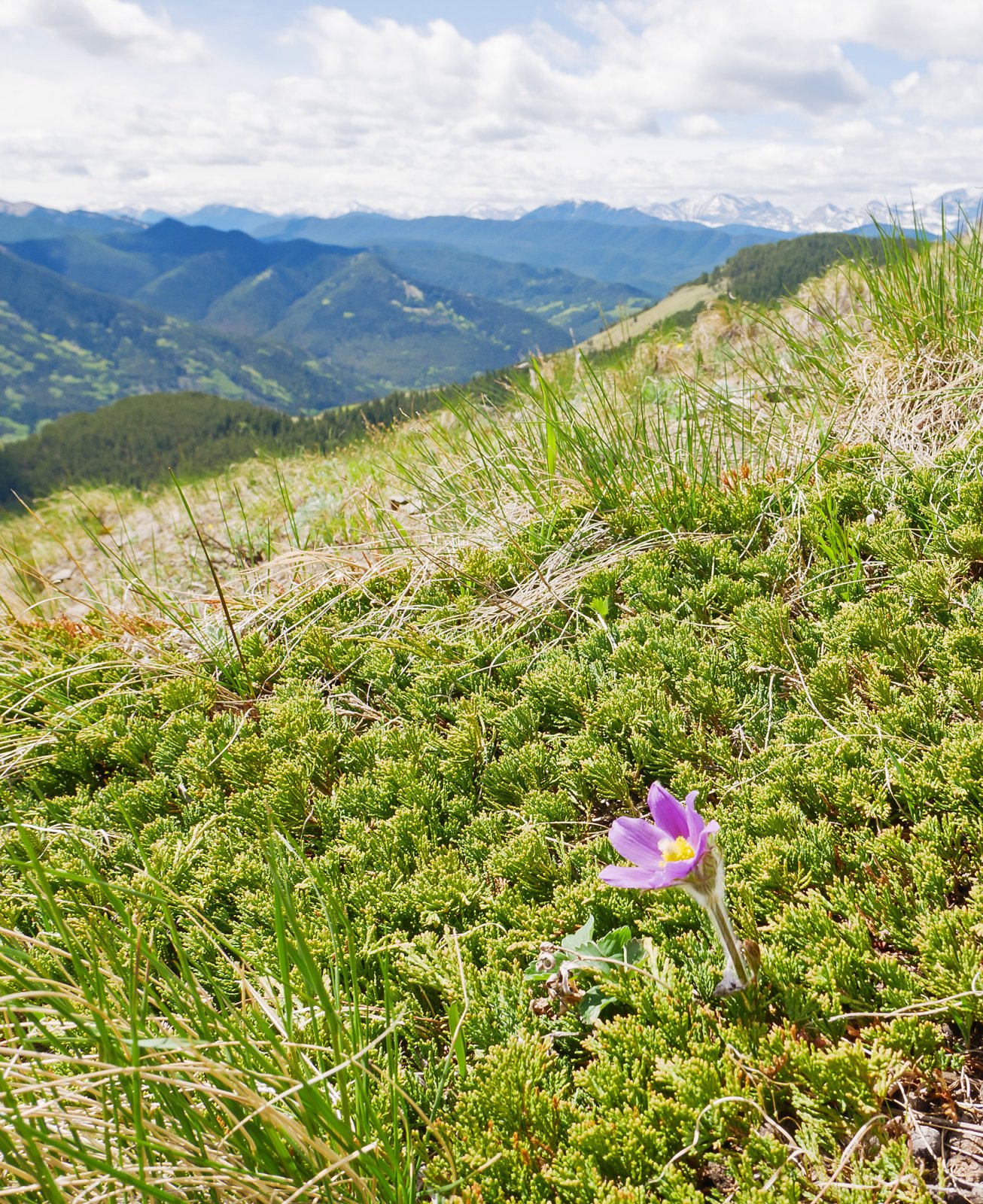 Just below the first summit, snow drifts began to appear on the more shaded lee side. Relief for those wearing fur coats, and no more sharing water from my camelback with our retriever, Piper. 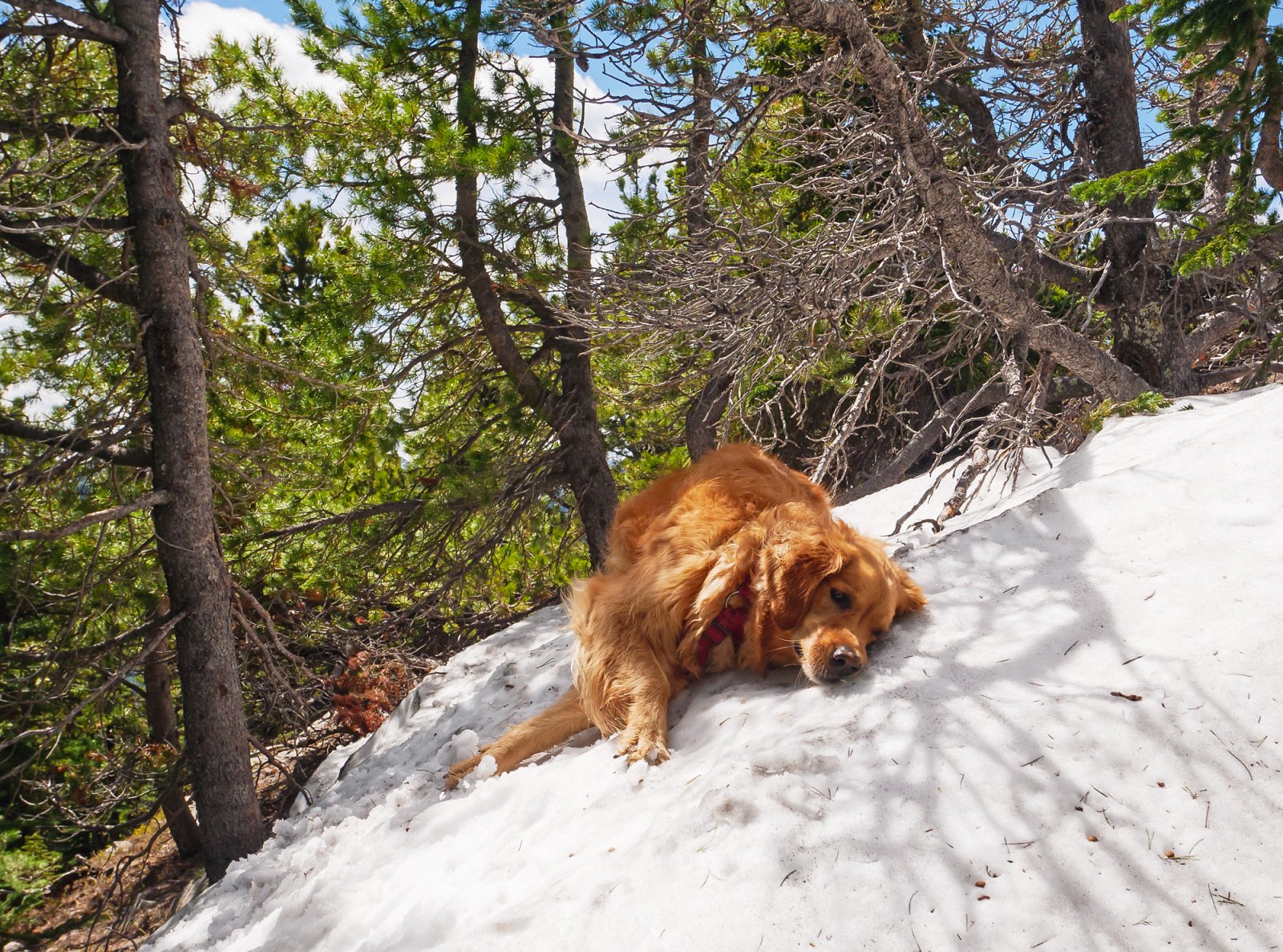 Arnold the flower expert, taking in the view westwards. 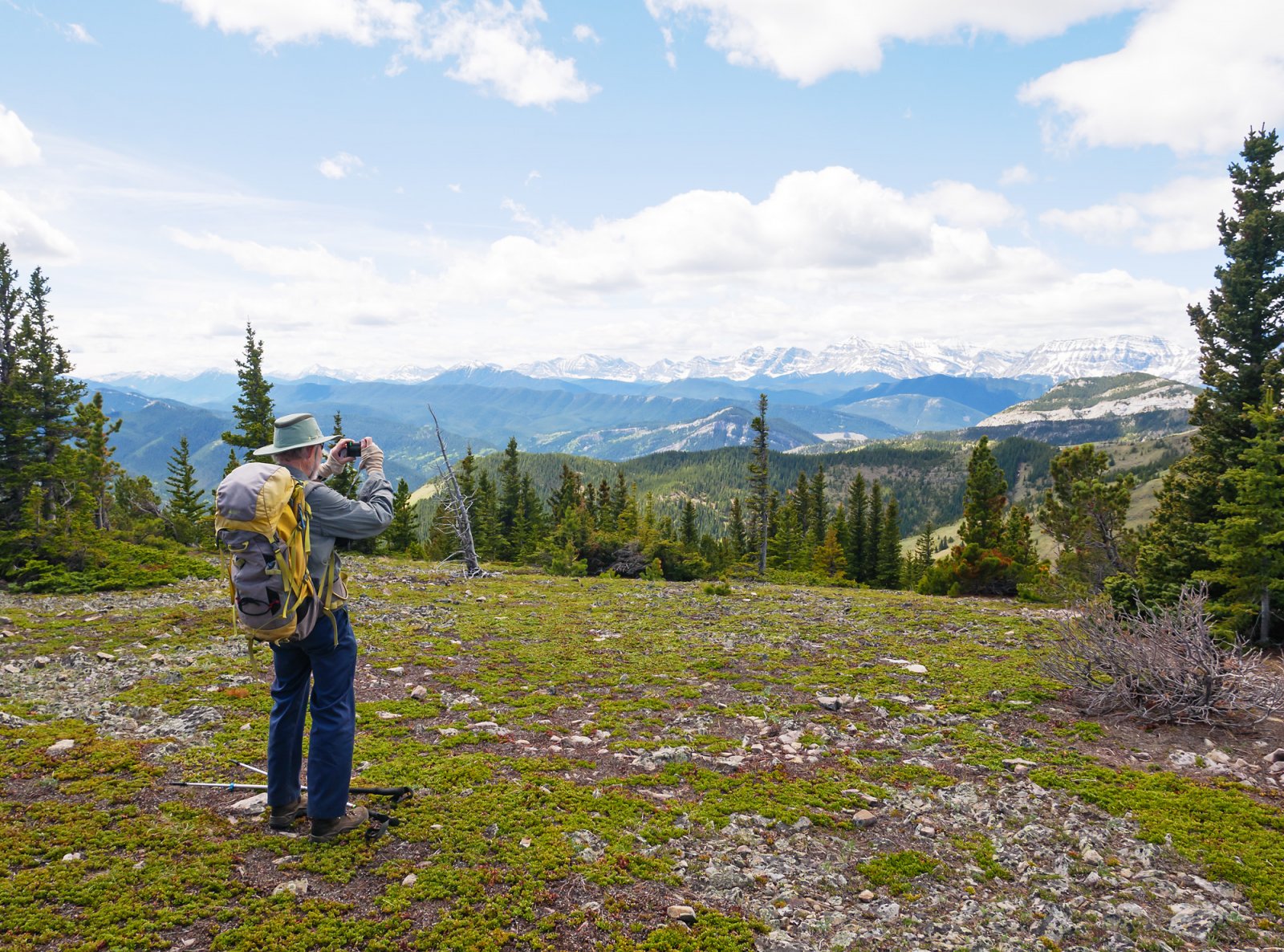 The first summit is really more of a plateau, where the undulating begins as we drop a bit off screen to the left, and then resume climbing to the highpoint of our day. 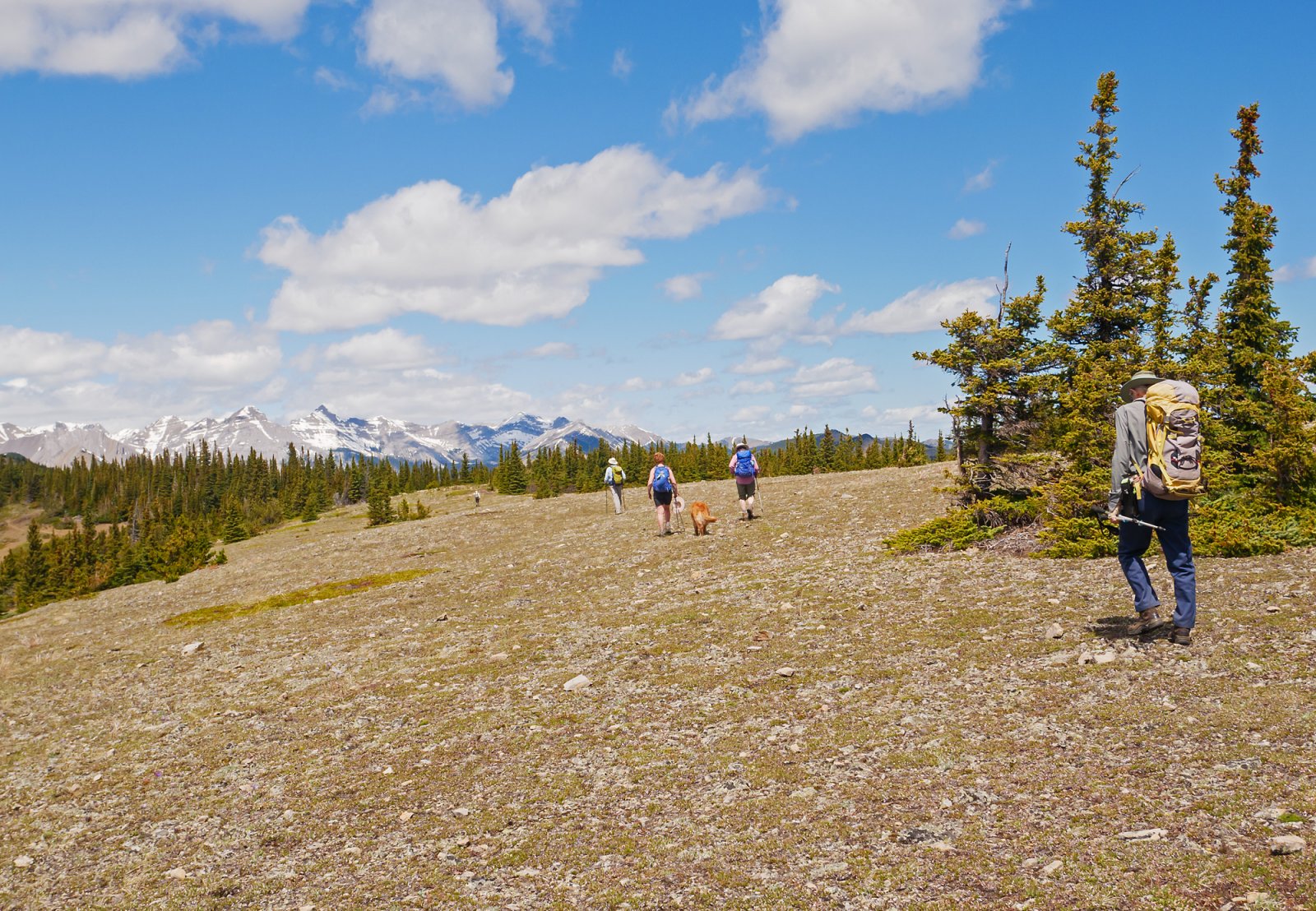 Lunchtime at the highpoint. Not social distancing- just choosing spots more or less out of the breeze, or opting for either rocks to sit on, or cushy vegetation. Arnold and John at left were engaged in some political discussion, so maybe that has something to do with the separation. 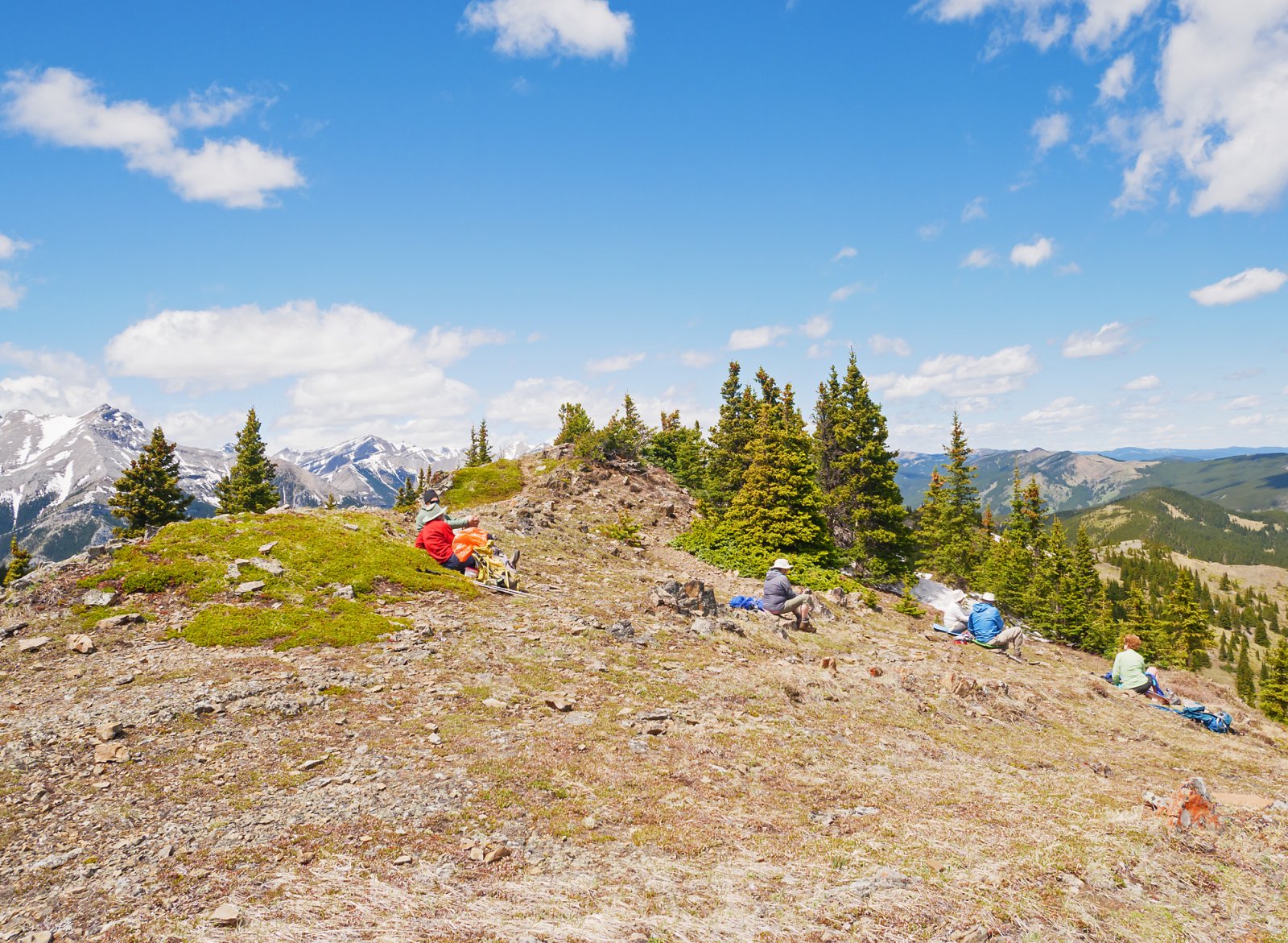 Looking north, with the office towers of downtown Calgary visible to our eyes on the skyline, but not really showing up on camera. 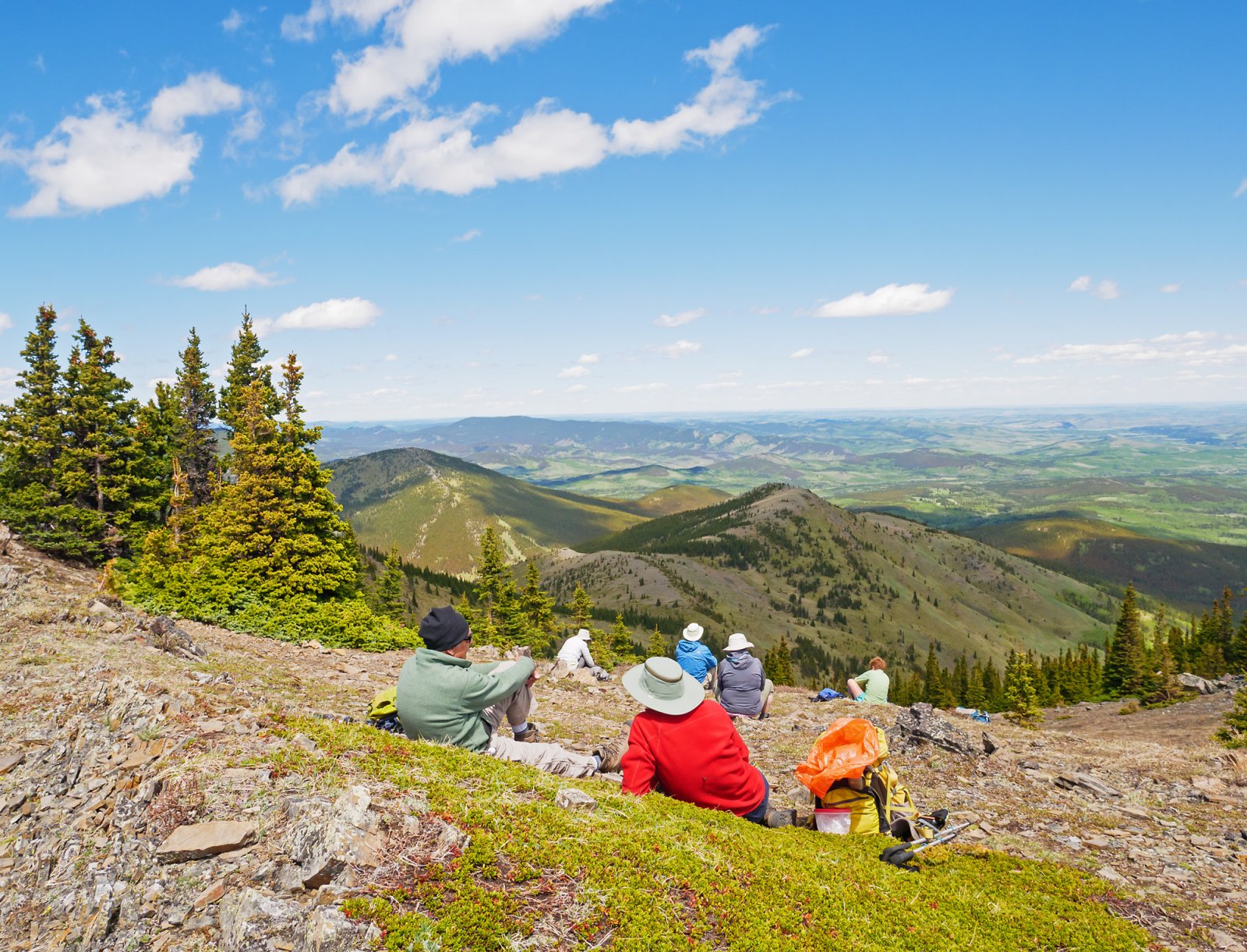 A bit of yellow Draba at treeline on the summit of the highest hill. At centre, the snow gullies of Holy Cross Mountain are beginning to melt out enough to show how it got that name. In the far distance you can see the unusual amount of snow remaining along the divide. 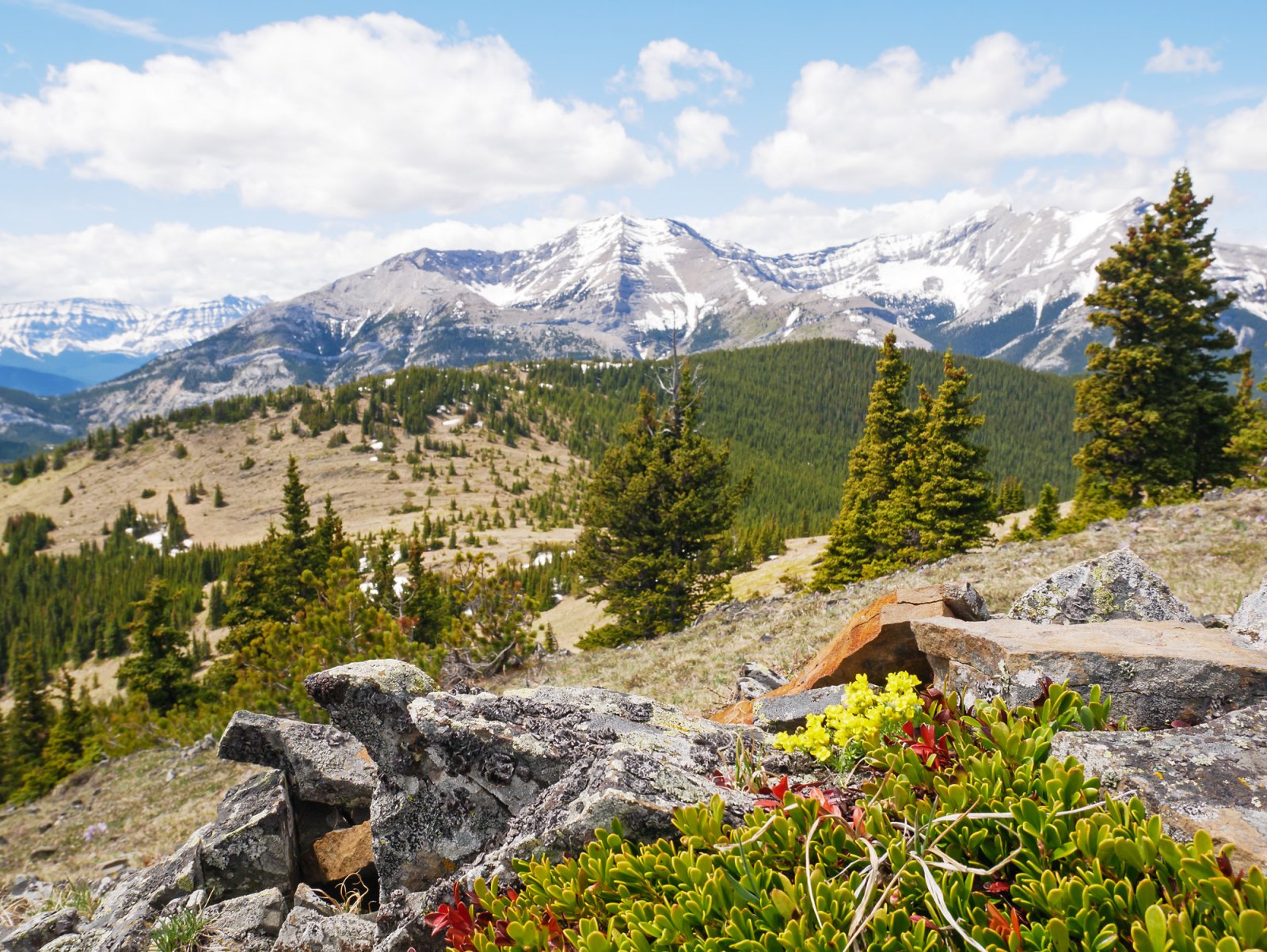 Moving on, with another descent leading into more easy uphill to the next bump at far left. 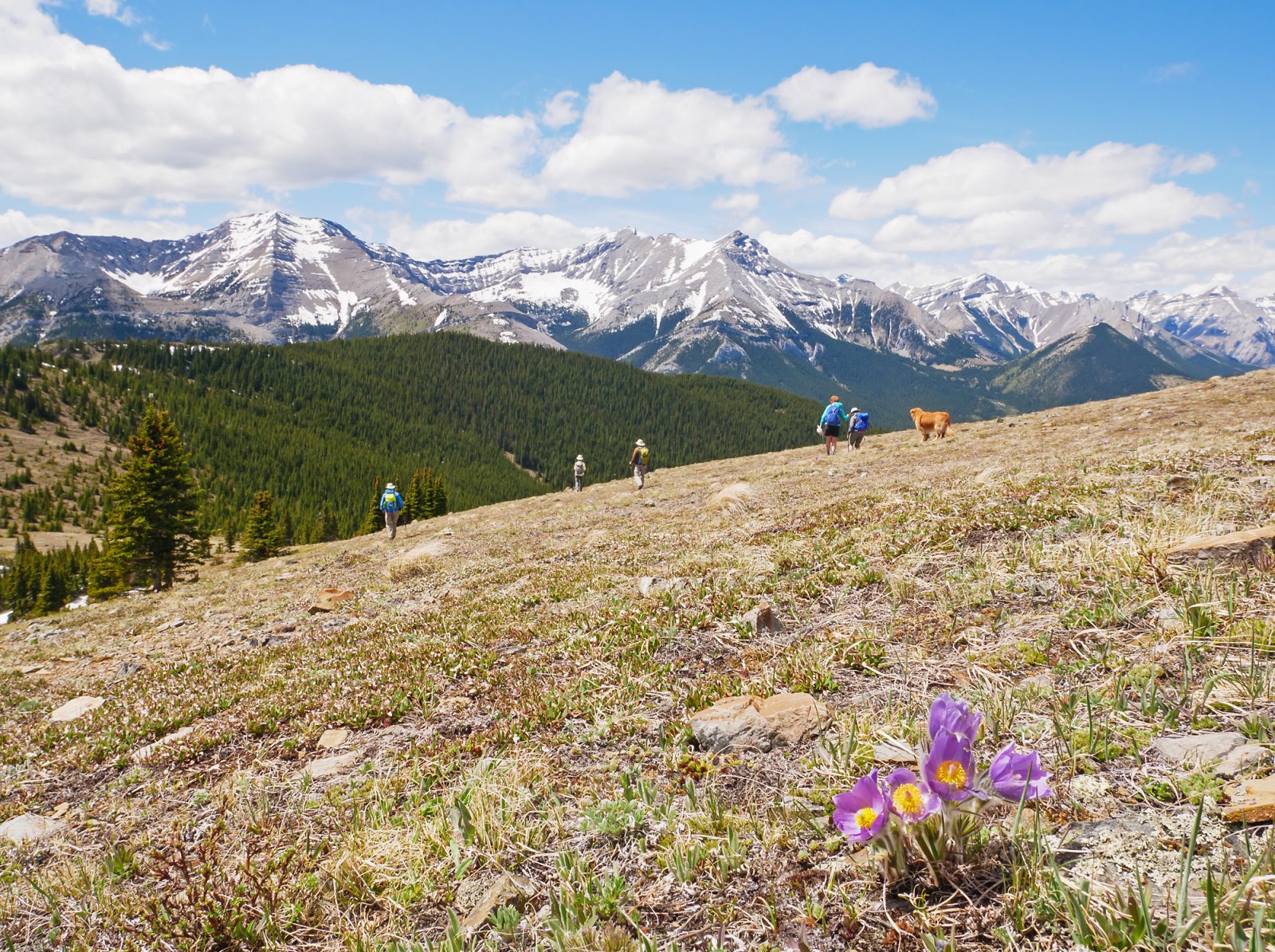 The final summit was fairly non-descript, being mostly treed. A winding descent through open forest led to a meadowy ridgeline above the aptly named Grass Pass. 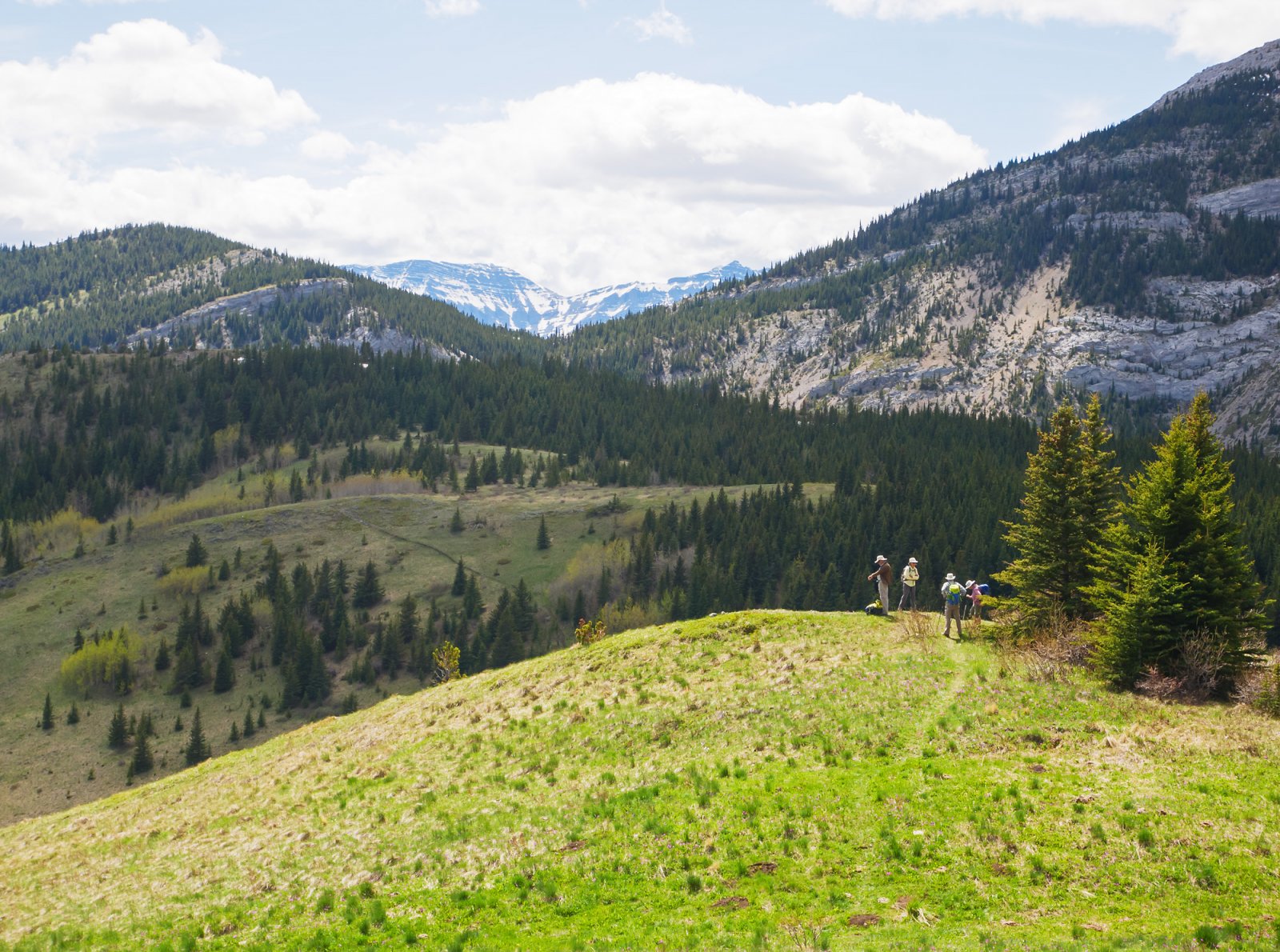 Shooting Star thriving on the hillsides above Grass Pass. 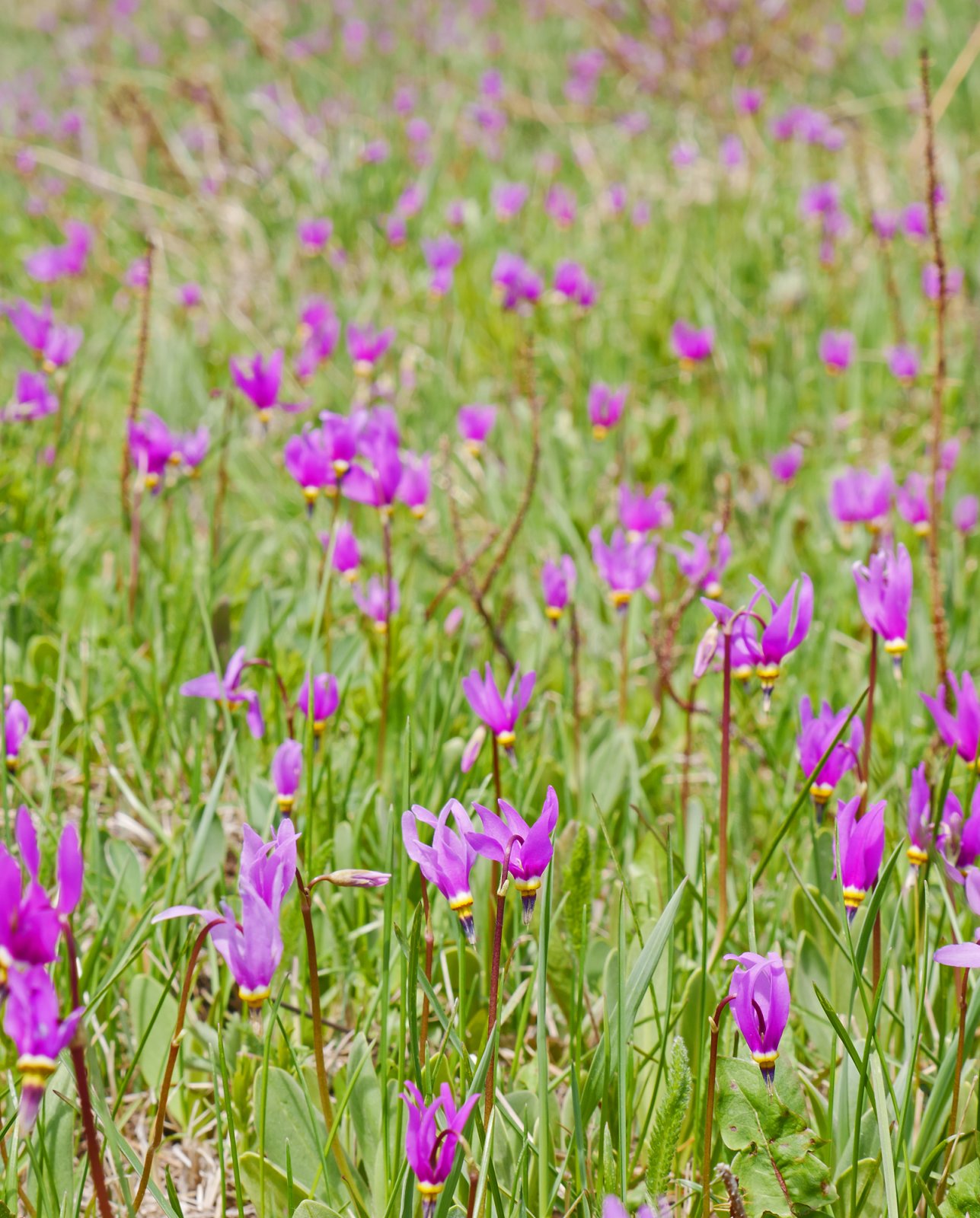 From Grass Pass, a well trodden horse (and cattle) trail descends easily but somewhat mundanely, 3 km out to the highway and our waiting shuttle vehicles.
A look back at the ridgeline coming off the Bull Creek Hills. 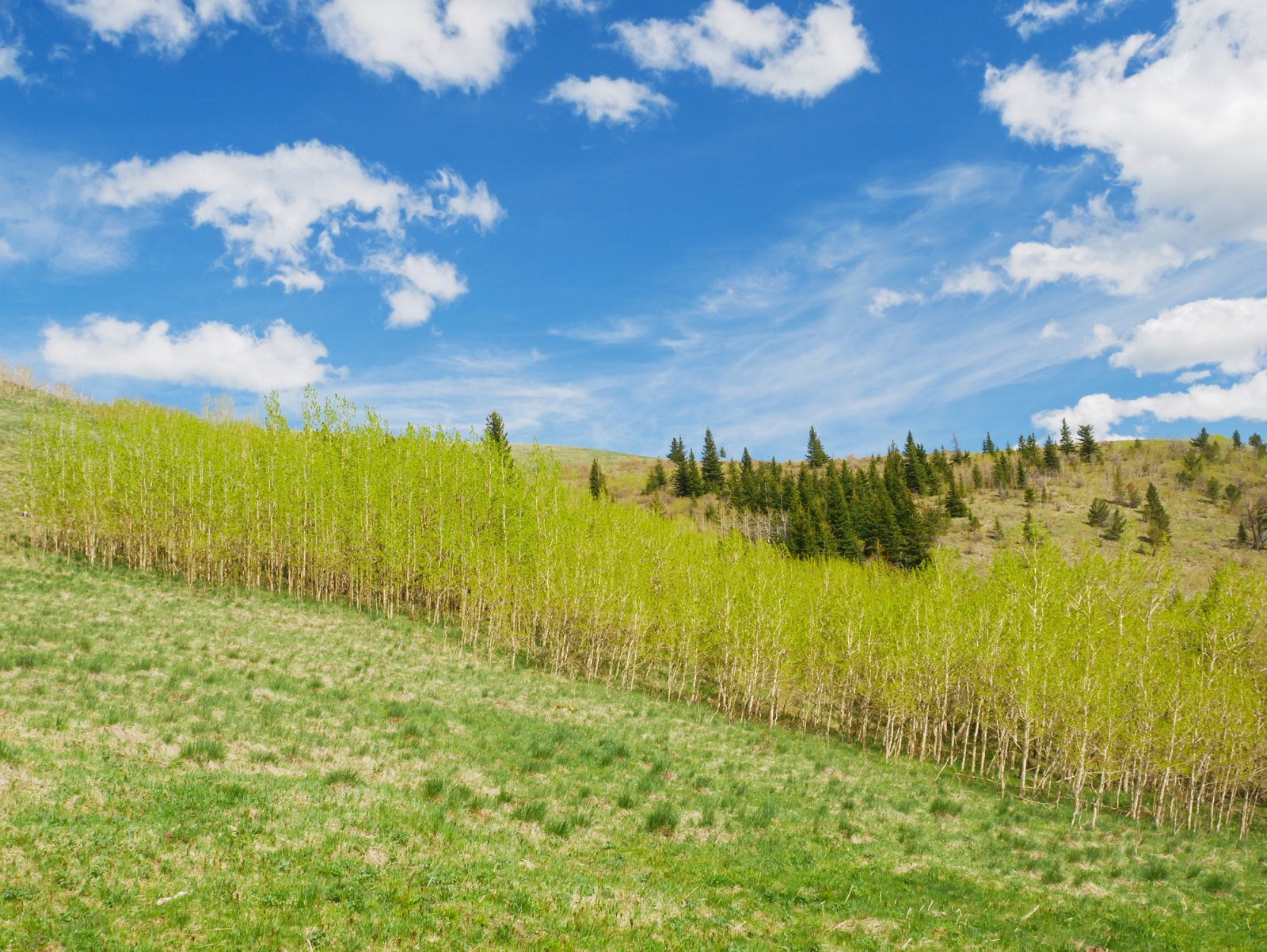 Halfway down the horse trail is a grove of sweet smelling ancient Douglas Fir. How many storms and fires has this veteran survived? 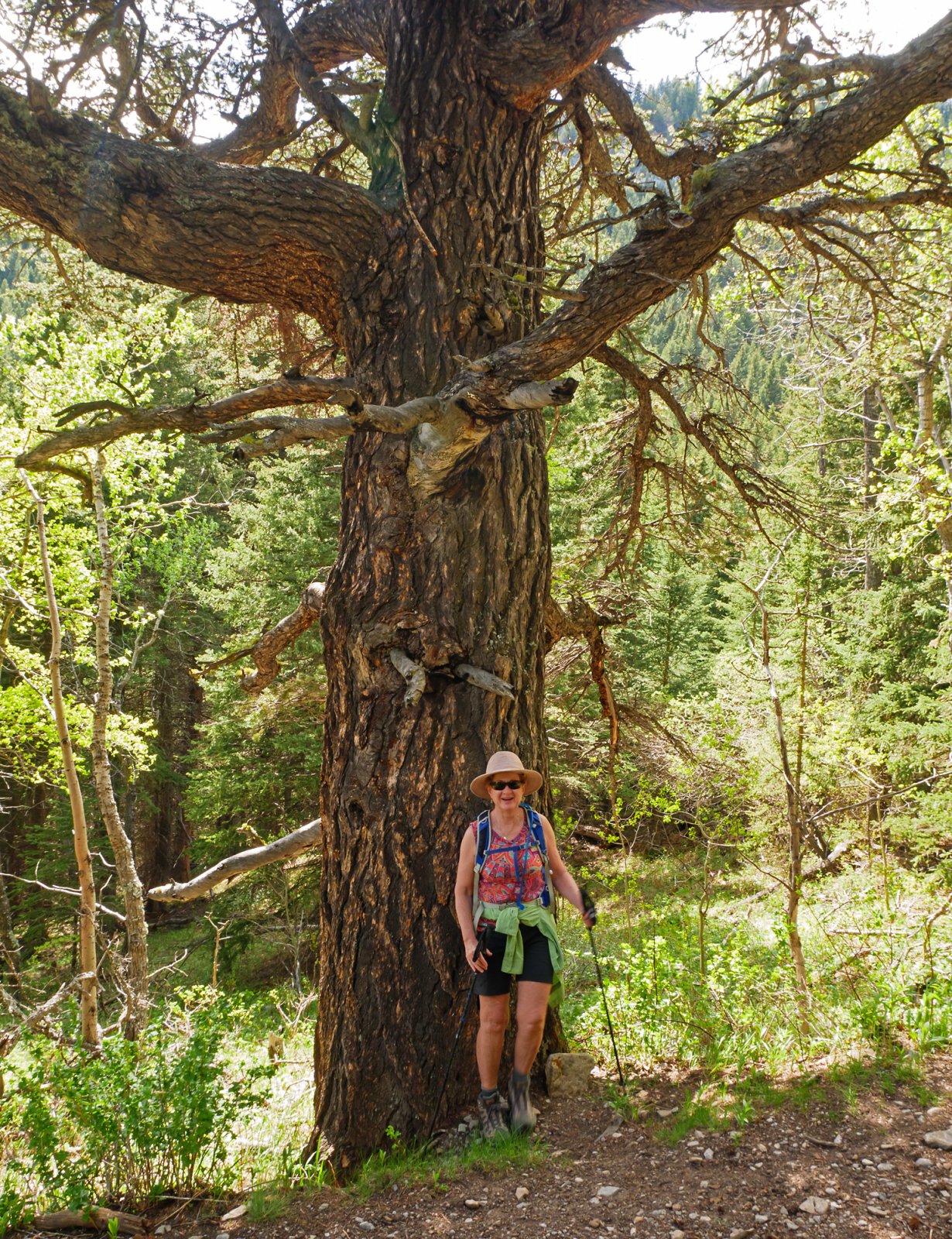 So that finishes up a great day of hiking. Fine scenery and flowers with good friends, and best of all- Jo's knee, which was injured while skiing back in February, has passed it's first real test, pain free! We had been doing some really easy hikes and lots of cycling, so although this hike at only 11.5 km was not demanding in any way, the 940 m cumulative elevation gain on sometimes steep and rocky trails was a good indicator that things really are on the mend.
Last edited: Jun 19, 2022
https://steveriggs.smugmug.com

Beautiful, and a beautiful time to be out there.
There is no path to happiness: happiness is the path

All that within a 7-mile hike? That's awesome. Great pics and captions.

I love all the wildflowers
We are here so way behind, a lot of places still have 3-10 ft of snow
http://yvonnebaurphoto.smugmug.com/

Yvonne said:
I love all the wildflowers
We are here so way behind, a lot of places still have 3-10 ft of snow
Click to expand...

I'll be there in 3 weeks. I'm bringing my mud boots as I've read most trails are messy with all the rain and snow melt
You must log in or register to reply here.
Similar threads