The summer of 2014 saw quite a bit of early season snow in the Winds. I delayed my launch a little and chose an easy start on the Pole Creek Trail. Patchy snow in the trail began not far above the trailhead. Generally I avoid the popular spots even though they are very scenic, but early and under difficult conditions they can be pleasant. 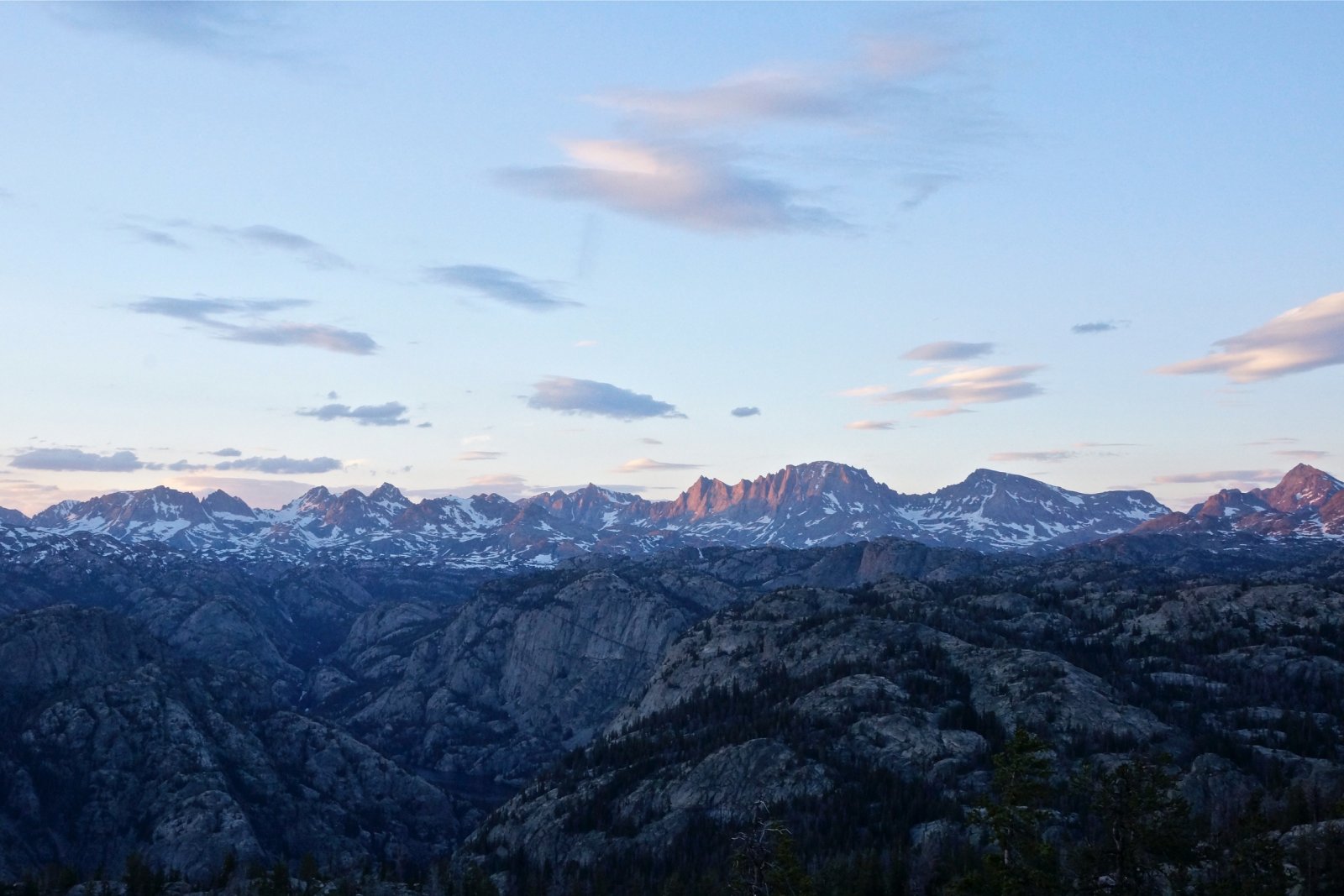 After a mid afternoon start I walked as far as Photographers Pt. It was head net conditions as it always is that time of year. If you want to be almost certain to avoid all bugs in the Winds wait until the third week in August. I spent my time erasing knucklehead fire pits. The use sites here have suffered from ignorance and disregard. What kind of idiot thinks it’s appropriate to place another fire in the middle of the nice flat tent spot? Photo Pt gets so much traffic that it is a lost cause. I still clean there sometimes. I remember when there were no discernible sites, not so long ago. It is the remote camps that really benefit from the effort. When I come back to a way out spot where I did a restoration and can find no sign my spirit soars. 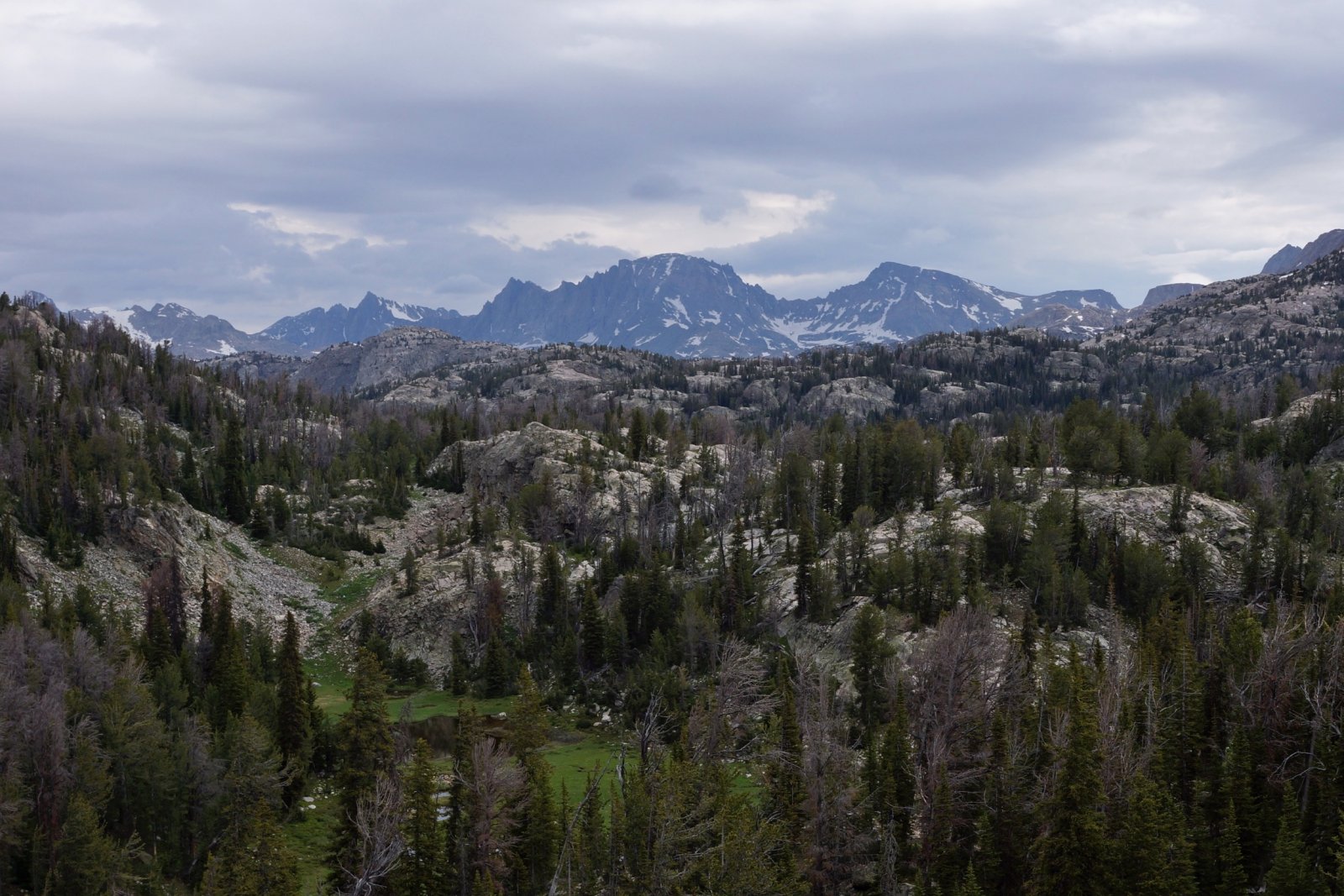 on the way in

After a nice early start I slogged through plenty of wet snow on the Seneca Lake Trail. The creek that flows from Seneca can be tough early, but not so fast this time. As my feet were already soaked (and would remain so for a couple weeks) I waded deep along the submerged trail at the edge of Little Seneca instead of scrambling up around. 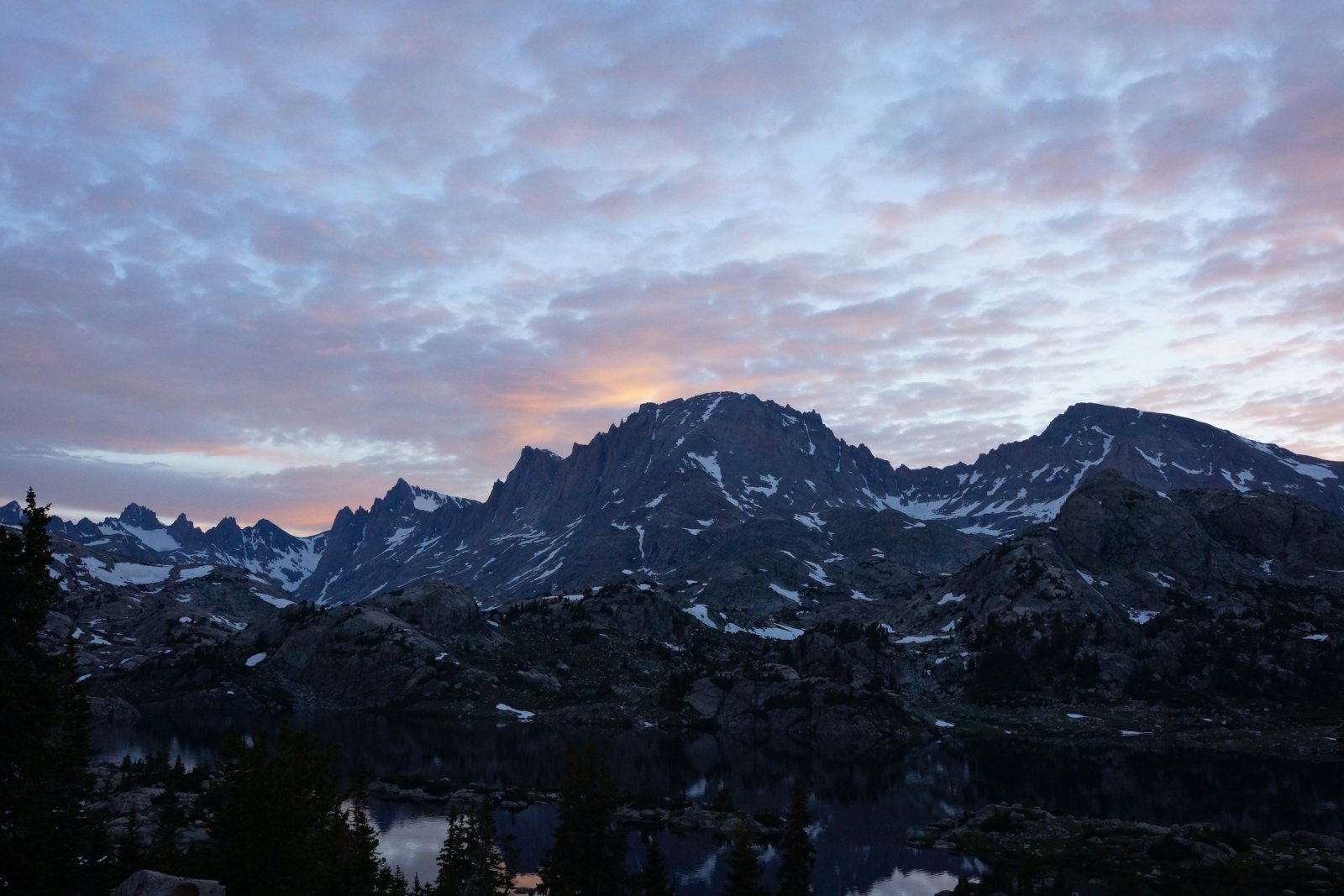 For my second night I camped above the ever popular Island Lake. I’m glad the managers have placed someone there now to enforce common sense, consideration and the rules. The next morning I packed and headed to the trail intersection to Titcomb/Indian Basins were I stashed the load and day hiked up into Titcomb. I went to the end and the weather rolled in. Rained steady for the walk down to the pack and then let go. I set up in a nearby hidden spot for the night. 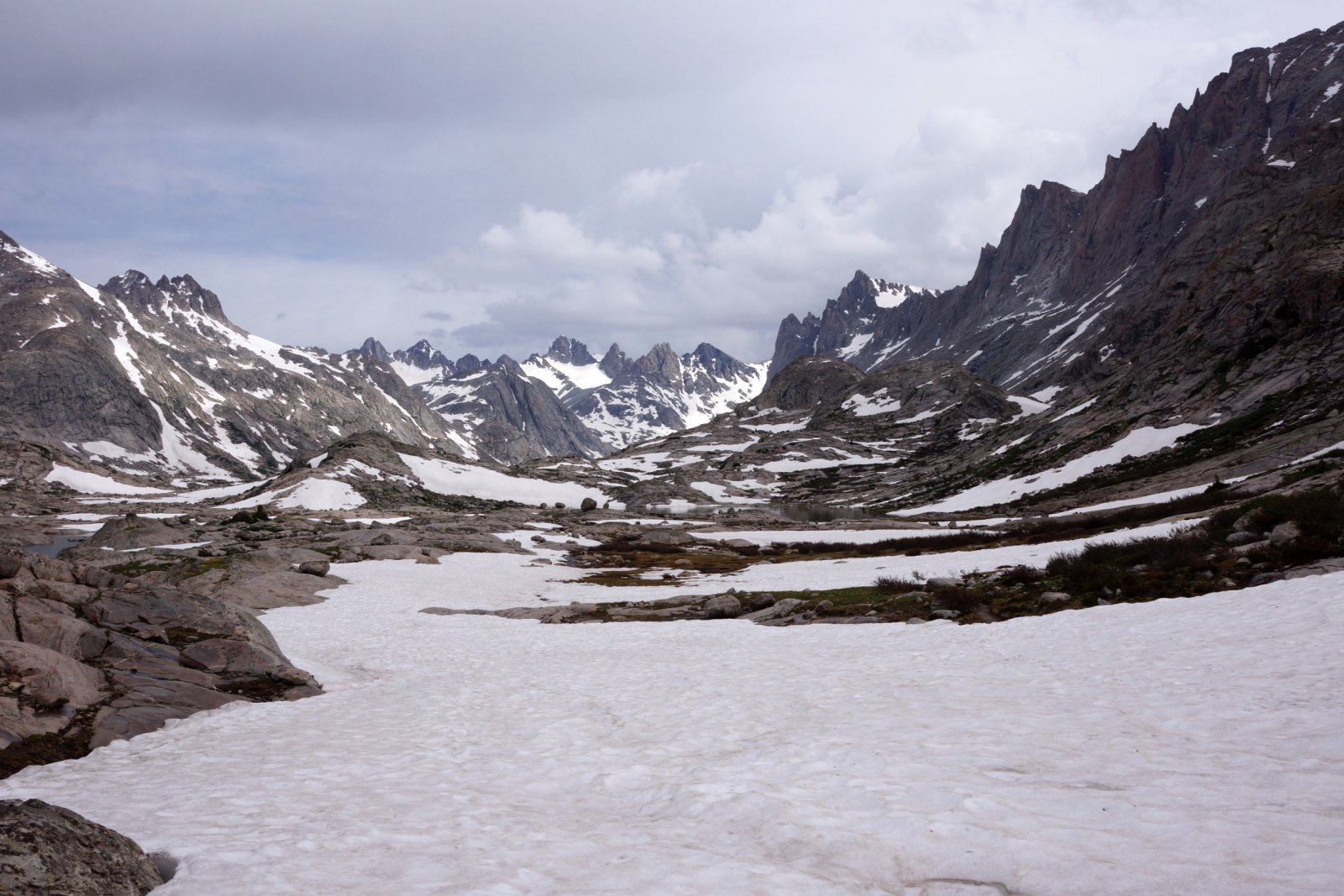 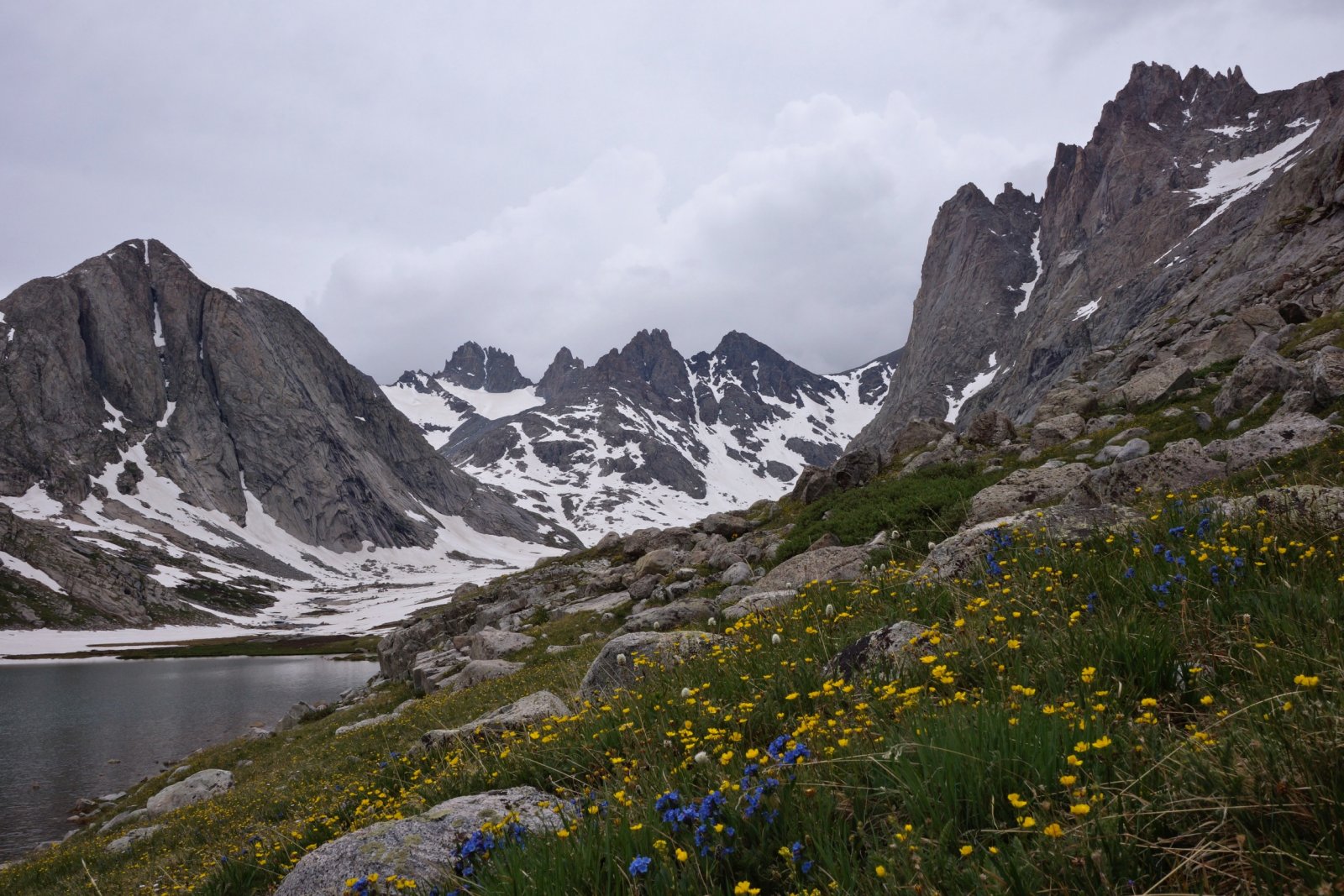 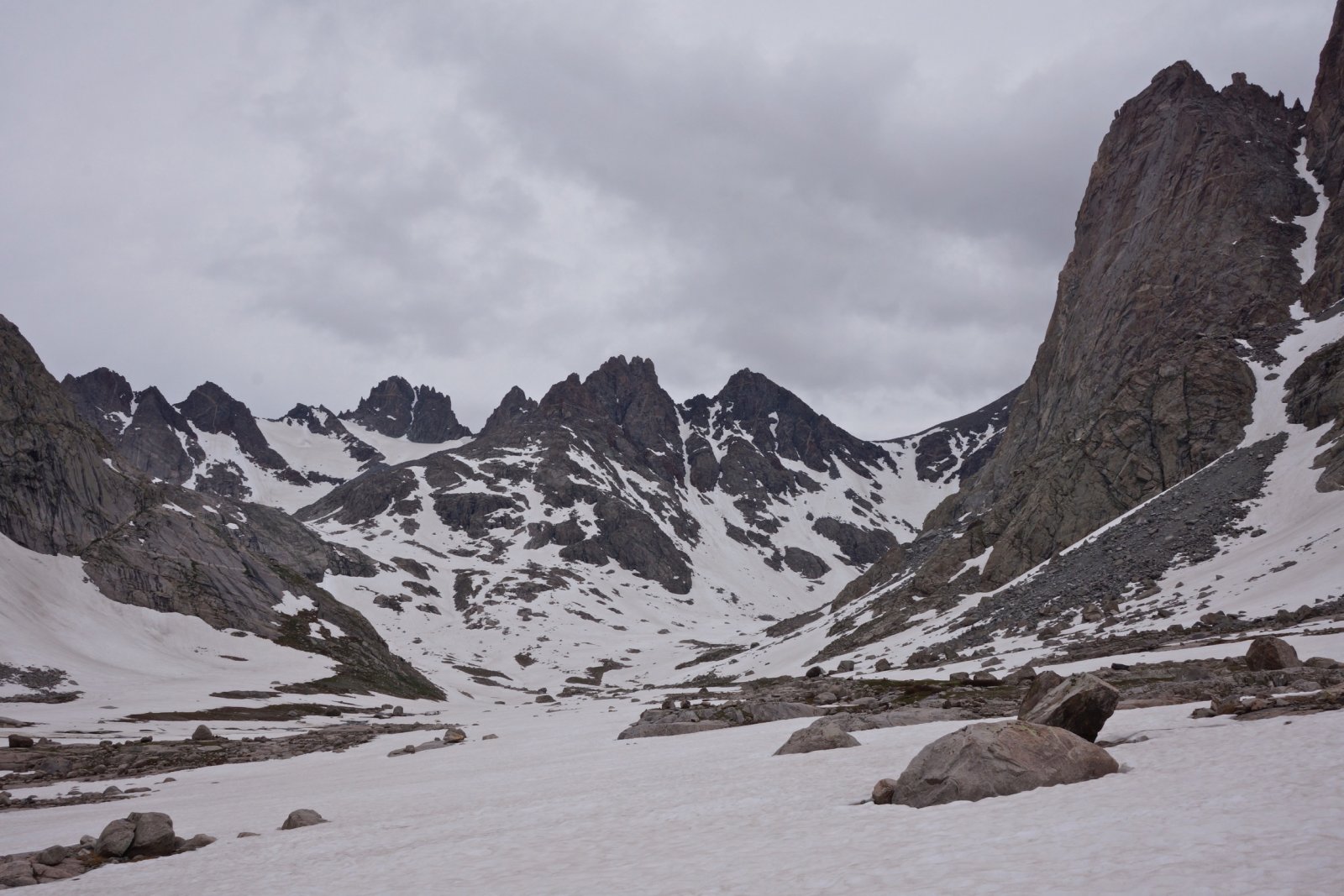 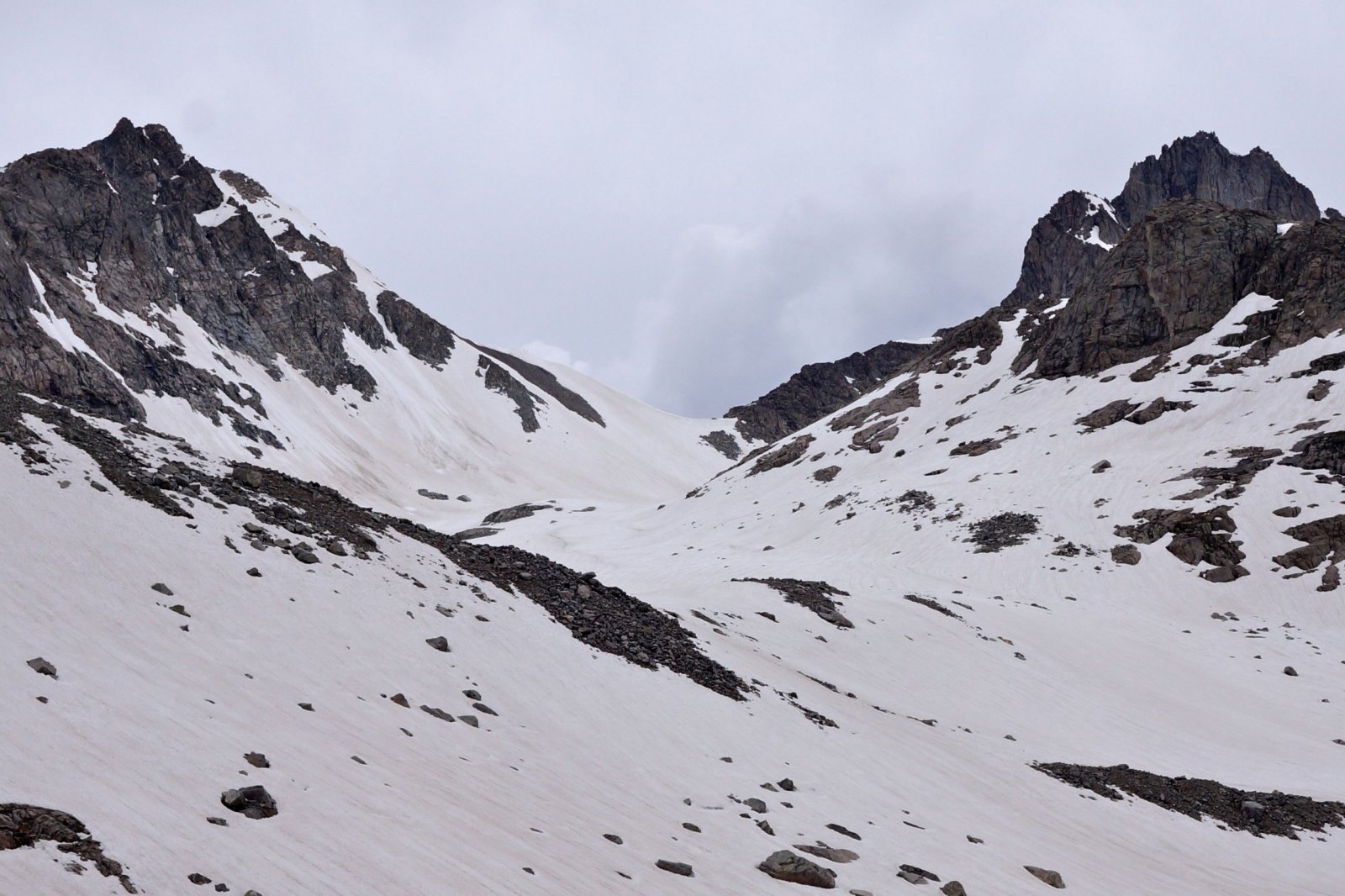 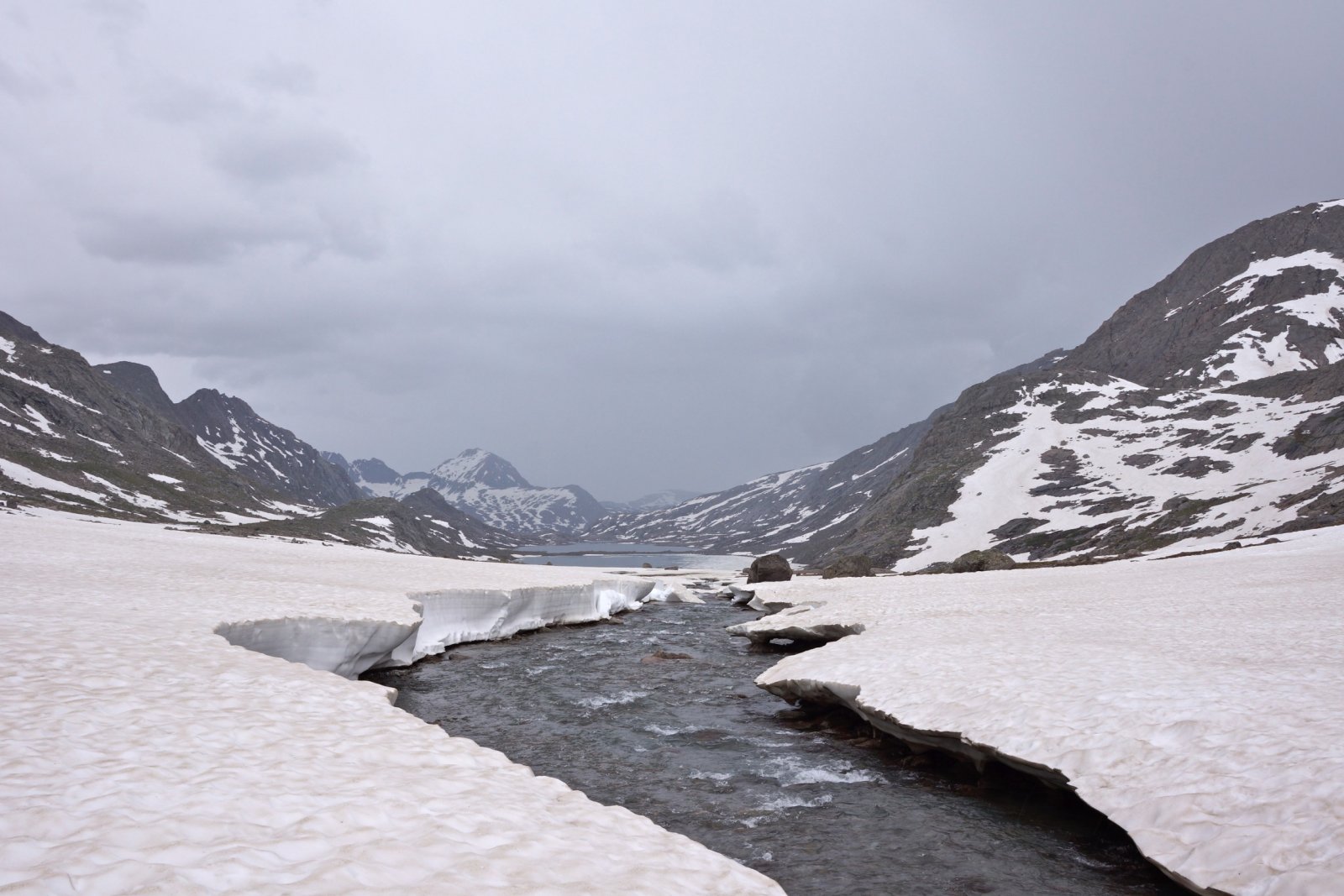 I woke the next morning feeling quite poorly in the gut. After multiple squats in the bushes I lay back down for a while. When I got vertical again I decided to walk around nearby a little. 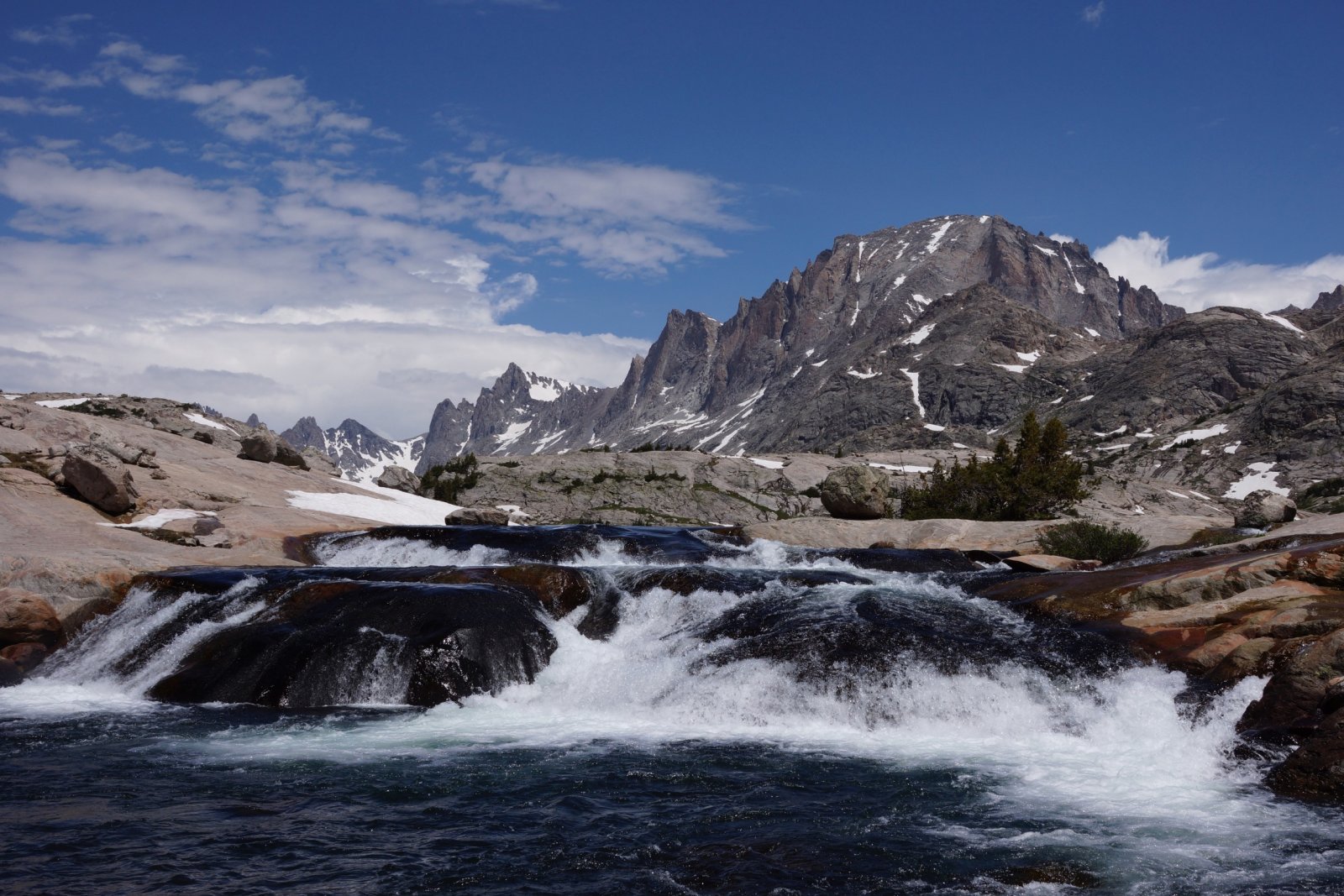 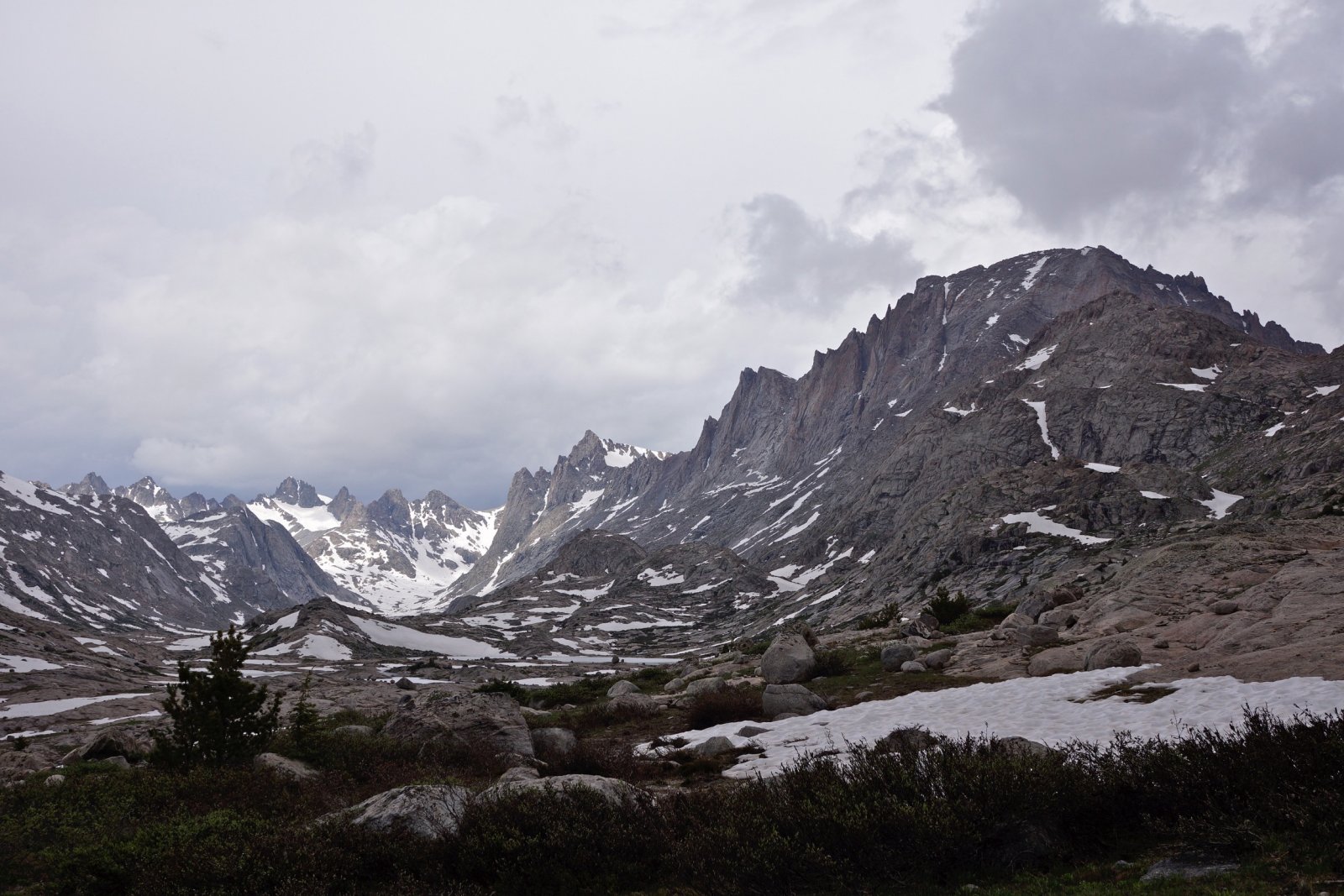 Day five came and I still felt out of sorts. I packed and pushed a short ways into upper Indian Basin. The sun was back and it was so nice. I picked a flat spot and spent the afternoon defending my gear from rampaging marmots. They got my camera bag, my cook pot cozy, and while I was watching a couple of them another crept unobserved up behind me and chewed on the lid of my water bottle. It was just short of nonfunctional. I got so mad I threw rocks at them in the distance until I hit one, and then felt badly. 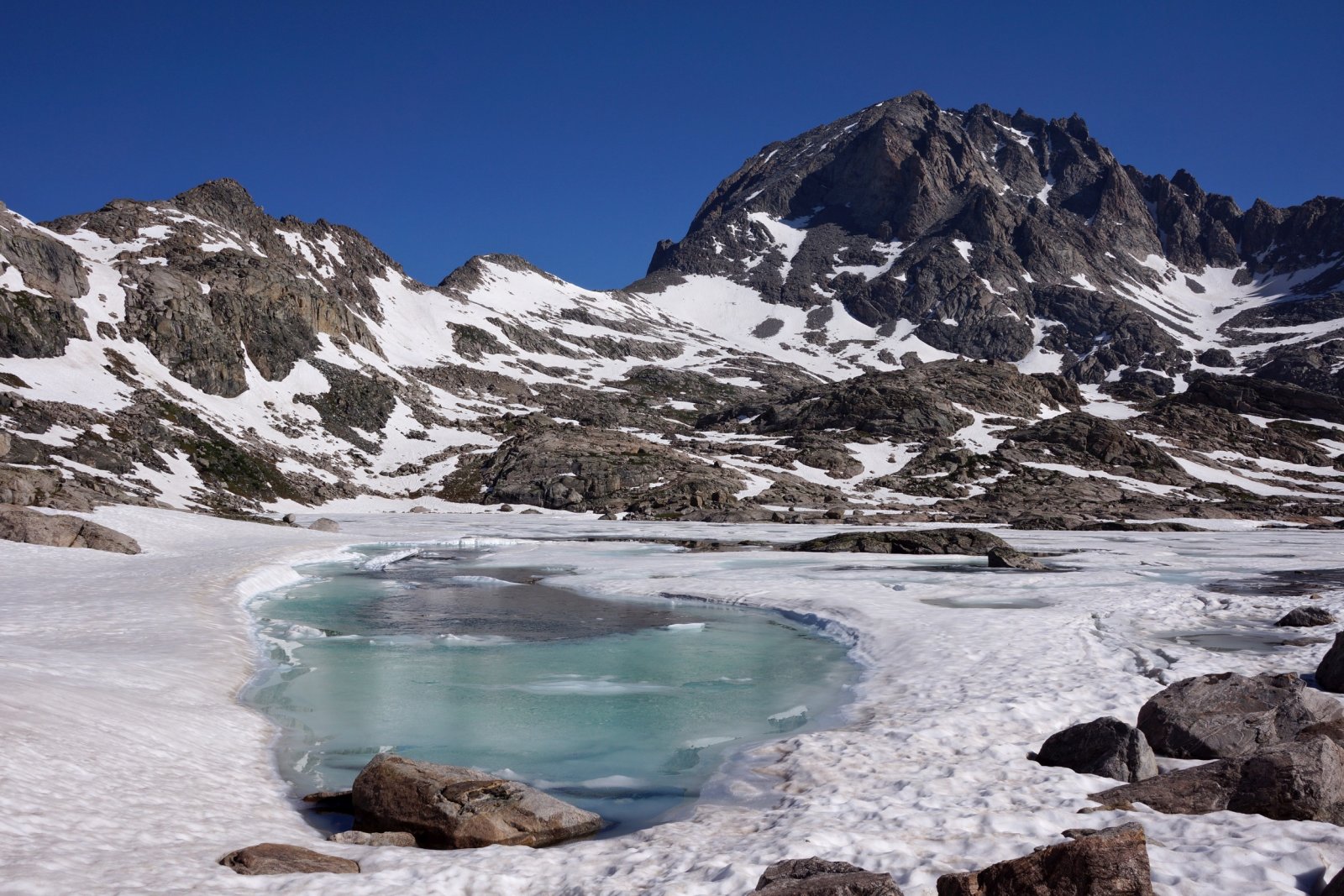 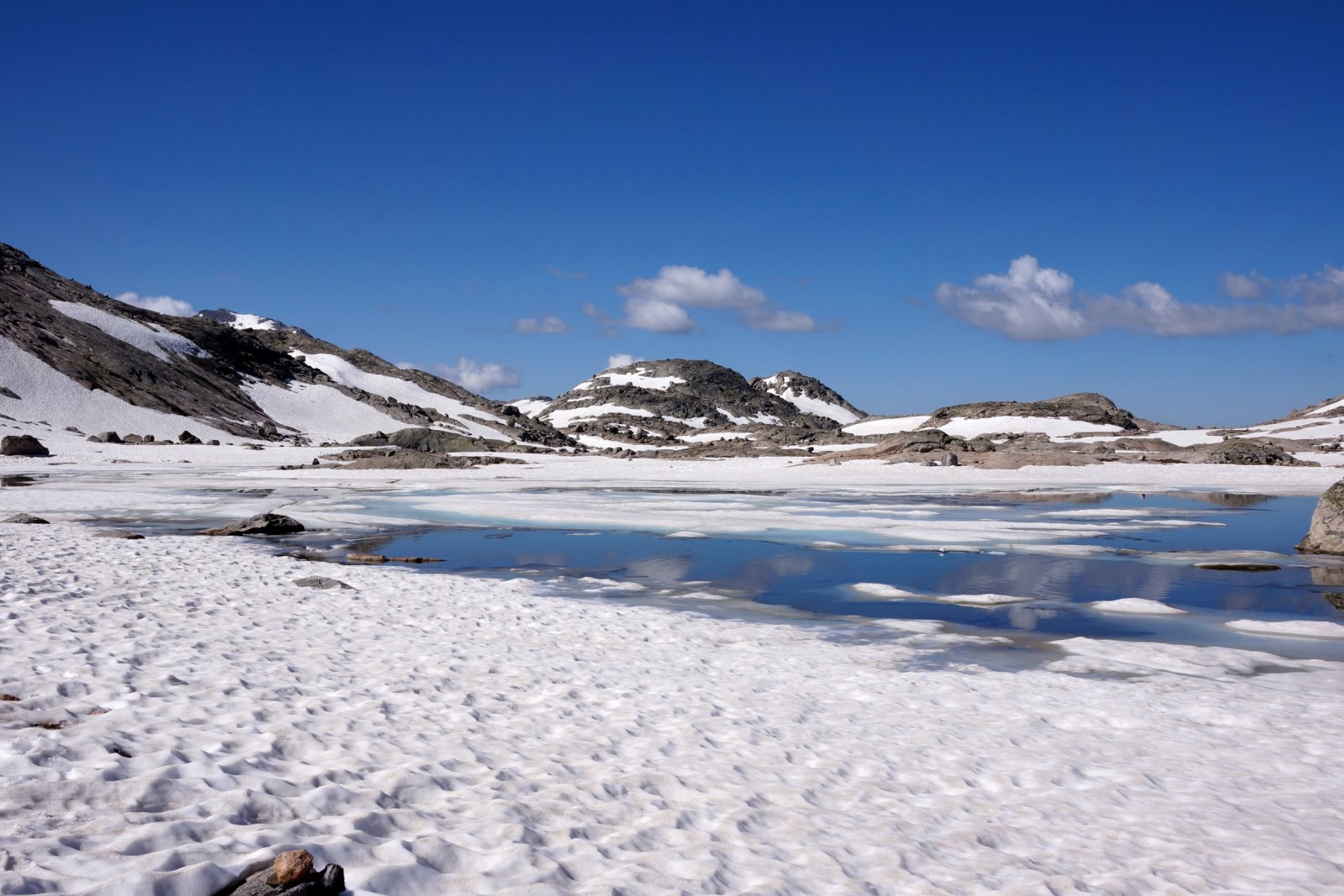 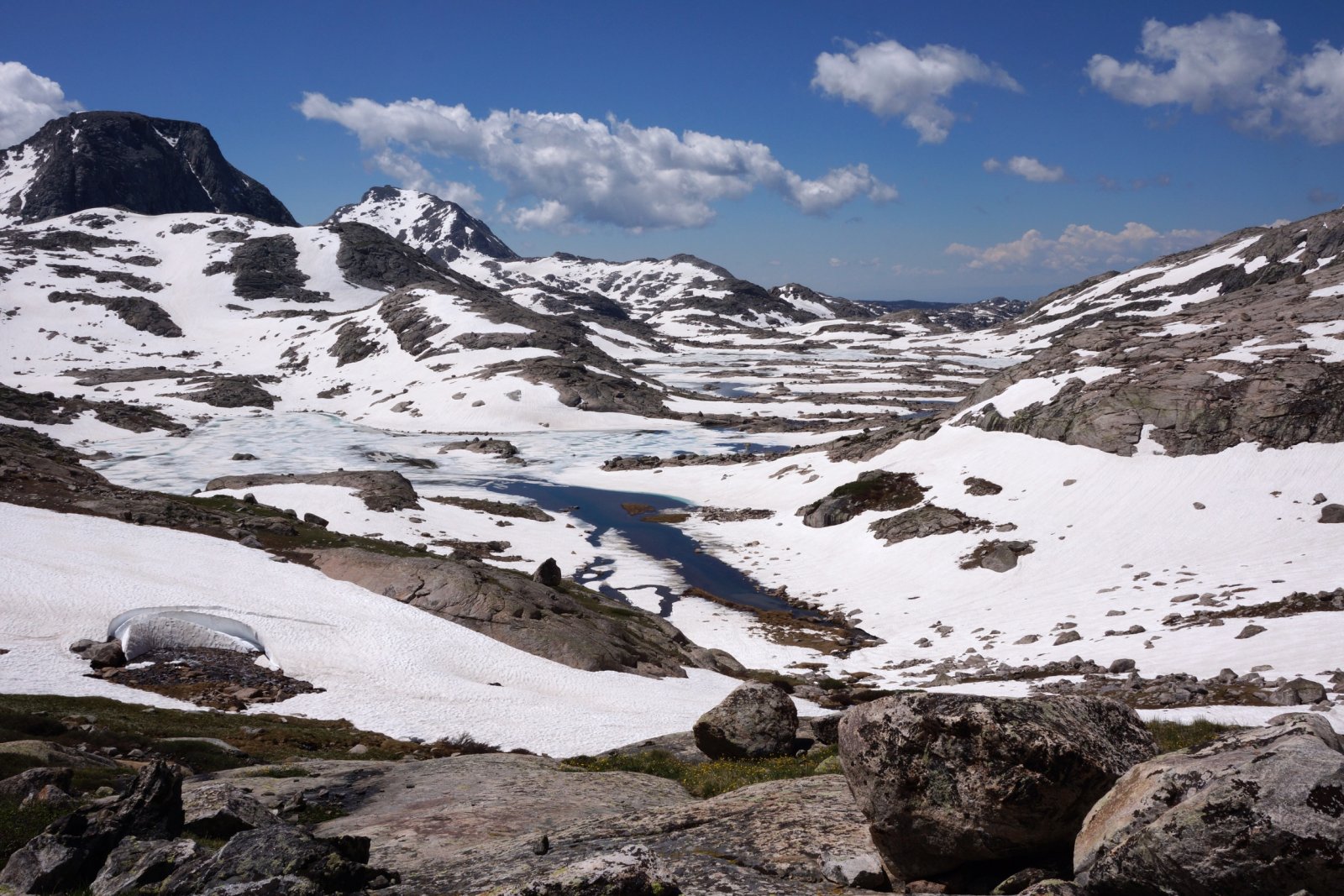 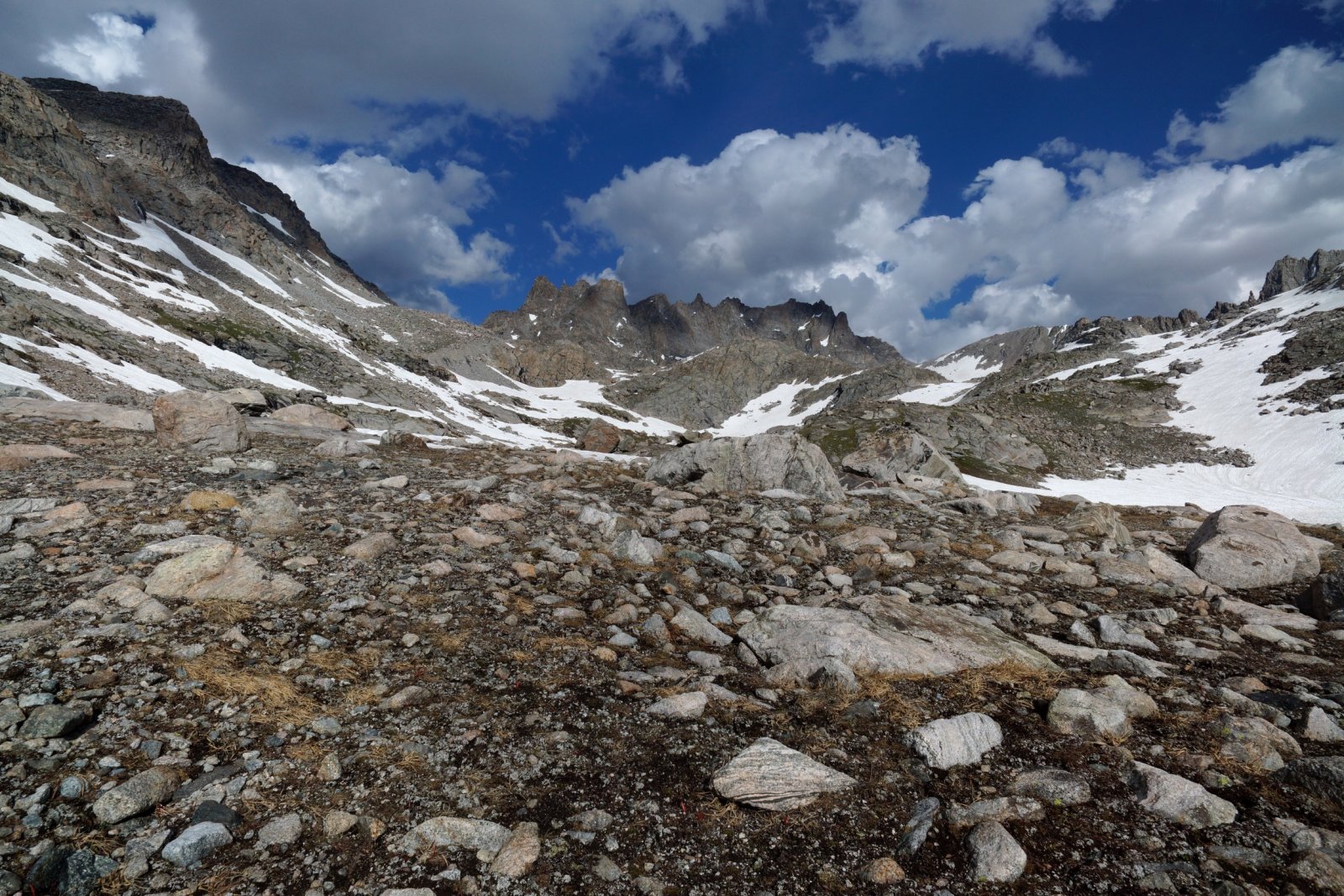 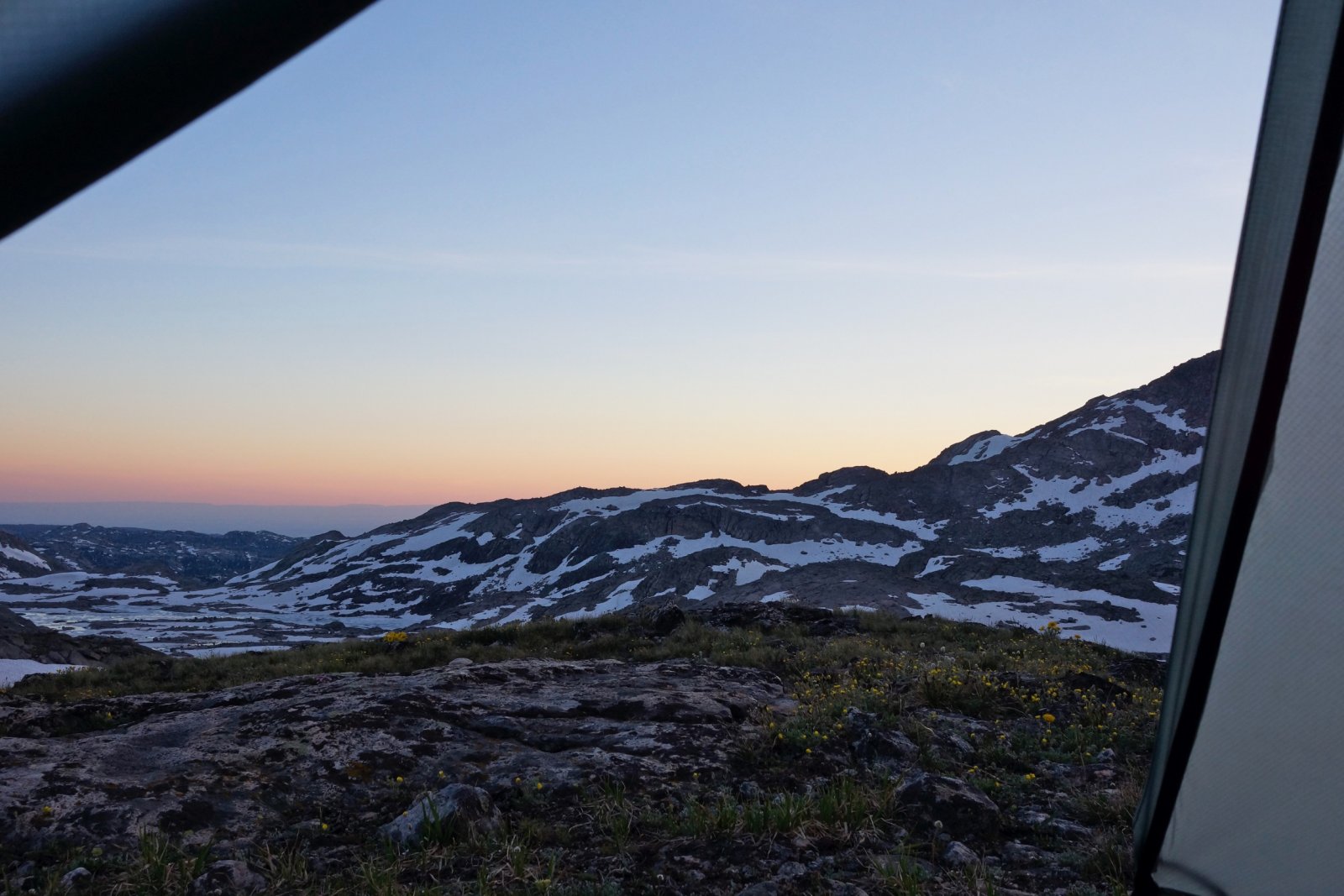 My tummy felt way better in the morning. It froze hard overnight and I was sure glad I had my light crampons and axe as I continued up over Indian Pass and into the rest of my odyssey. 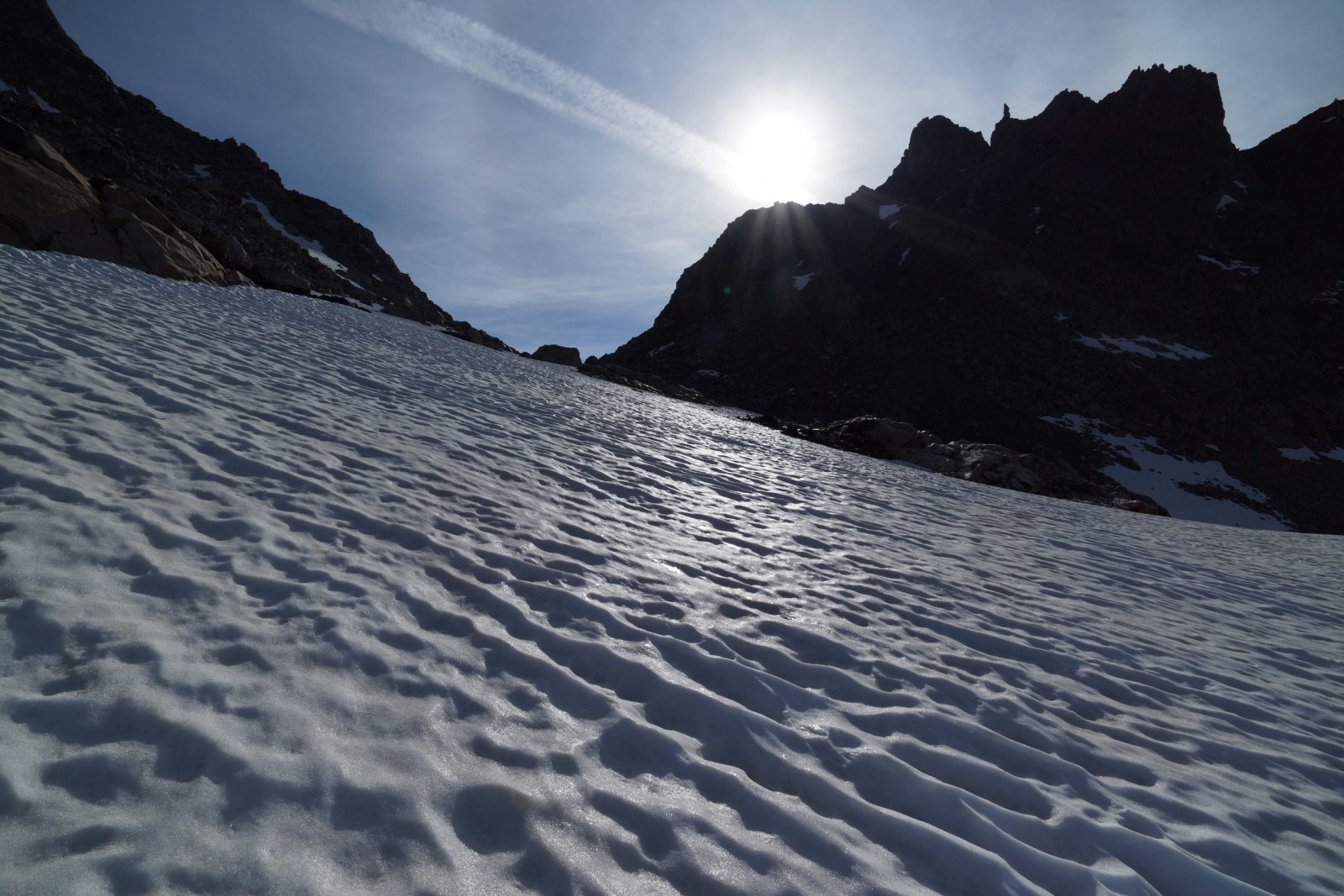 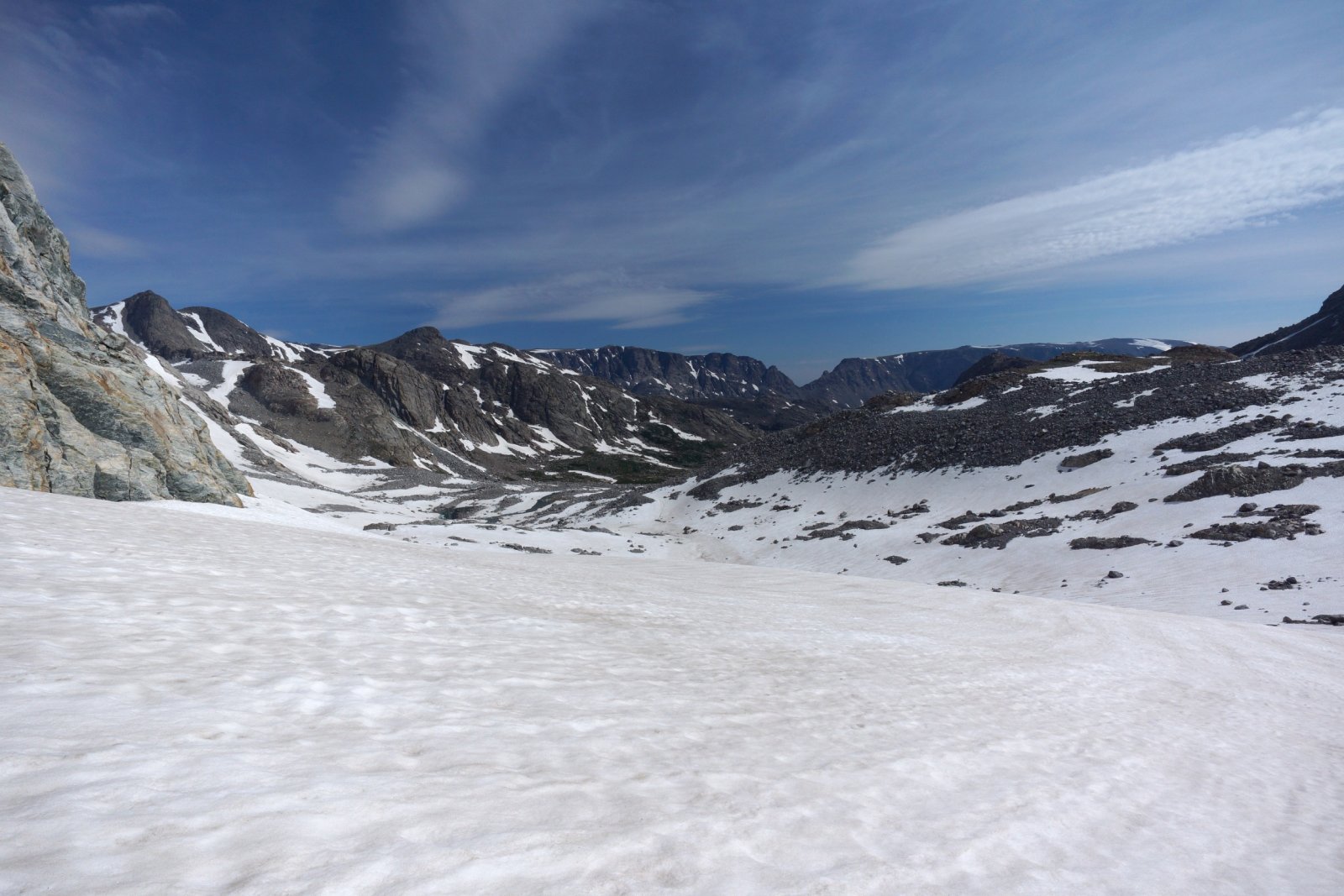 Great TR- thanks for sharing! Incredible photos. Those marmots sound worse than woodchucks in the yard. What do you mean with "they got my camera bag"- did they chew holes in it or completely take off with it? I had no idea they were so destructive, apparently they can even disable vehicles in more busy parks... https://www.nps.gov/seki/planyourvisit/marmots.htm (see last photo with car wrapped in a tarp).
Enjoy your current trip out West and keep posting photos!

Nice report. With the snowpack this year, it could be interesting, even early September. Finding low-impact areas to camp near Island is a real problem. Took my nephew last Sept. Camped at established sites on the knolls NW of the trail. Lots of rocks with TP under them. Sad. I looked to the SW away from the water but the hills looked too steep for any flat sites. Next year I may lead a few from my hiking group out there. May try to find a spot further to the NW, maybe as far as the outlet to Fremont to reduce impact. Great area and "must see" for newcomers, but LNT/low-impact rules need to be followed by more visitors.

Titans said:
Great TR- thanks for sharing! Incredible photos. Those marmots sound worse than woodchucks in the yard. What do you mean with "they got my camera bag"- did they chew holes in it or completely take off with it?
Click to expand...

Thanks for enjoying. Yeah, marmots can be a big pain in the butt sometimes when they become habituated. It is the salts that are the attractant. Once when at an established site in the Tetons two of them spent the evening staking out my spot and rushing in every time I peed. Those Indian Basin marmots were super persistent, there was a crowd of six or more and they were all over me. I swear two distracted me while their compatriot slipped stealthily from behind to within three feet to assault my water bottle. The camera bag and cozy were hit before I was aware of the situation. The camera bag lost the zipper pull and suffered around the edge of the lid where I would grip it to open, still functional to this day. The cozy, made from CCF, did not fare so well. I taped it up and used it for the remaining 36 days of this trip, then it was retired.

Glad you liked the report, thanks. Awareness and consideration beyond ones self are important qualities. What we have been given here is finite and precious.

Looks spectacular with the snow!
You must log in or register to reply here.
Similar threads