The bloodiest spot in Arizona

Originally posted on my blog at www.livevicariouslythroughus.blogspot.com 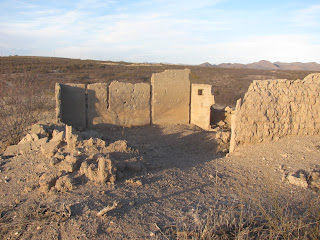 ​
Brunckow Cabin is known as the bloodiest spot in Arizona. Roughly 2 dozen murders and killings have happened at or near the cabin, so since we're living in the area I had to check it out. It's located east of the San Pedro River, about halfway in between Sierra Vista and Tombstone. We drove to Brunckow Road, parked at a small turnoff, and hiked the rest of the way down. The road says it's closed as an administrative road, but they apparently don't mind if you park there at the turnoff. 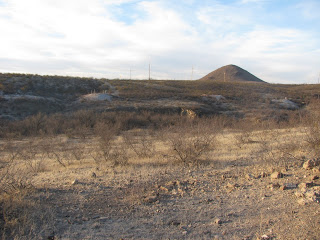 ​
We hiked about half a mile down to the cabin ruins, passing numerous abandoned mine shafts and the crumbing foundation of what I think used to be a mill to process the ore. From the cabin site, I saw nearly 2 dozen mines or prospect piles. 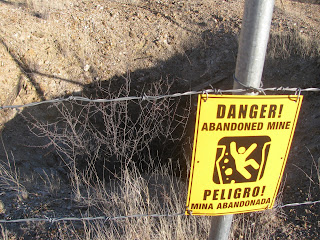 ​
Here is an excellent summary about the place, taken from geocaching.com. The geocache includes GPS coordinates that will get you to right below the ruins.

Born in 1830, Frederick Brunckow migrated to the United States in 1850. Educated in Engineering at the University of Westphalia, he joined the Sonora Exploring and Mining Co which brought him to Arizona. In 1858, Brunckow struck out on his own to develop his San Pedro Silver Mine, located 8 miles southwest of where Tombstone would be establish 11 years later.
Brunckow exploited his claim to the fullest, relying on Mexican labor mostly with Anglo supervision. His cabin sat atop of a hill where he could oversee and protect his claim.

In 1860, Brunckow was working the mine with three other Anglo men and about a dozen Mexican helpers. He and two of his men were robbed and murdered at the cabin. Brunckow’s death was especially vicious as he was killed with a mining drill and his body thrown down a mine shaft. The only Anglo survivor was a German cook who blamed the Mexican workers for the killings, though no one ever faced justice for the murders.
In 1877, Ed Schieffelin occupied the cabin as a base for prospecting the area to the northeast of the cabin. It is said that he used the fireplace in the Brunckow cabin to assay some of his samples after he made the discovery. When Schieffelin told a soldier of his find, the soldier allegedly stated that the only rock Schieffelin was likely to collect in that dangerous area would be his own tombstone. Undeterred, Schieffelin filed his claim under the name "The Tombstone." A name the City of Tombstone would take in 1879.
In early days of the Tombstone claim, the Brunckow Cabin was the scene mayhem and carnage. There were numerous shootings, men would come up missing, and that would end it. One man was supposed to have been shot and thrown into a well, but as there was an abundant amount of men in those days, an investigation was deemed needless. It was an ideal rendezvous point for the bandits along Charleston road, and the five bodies found there was a party of plunderers who had raided a Wells Fargo bullion wagon and fought over a division of the spoils. At one point a US Marshall took up residence in the old cabin, only to be murdered weeks later. As many as 21 men found their end in and around the cabin. Rumor has at least 3 graves in the area, to include the final resting place of Fredrick Brunckow himself.
In May 1897, The Tombstone Epitaph printed a ghost story featuring Brunckow Cabin and the haunted mine. It mentioned that every night a menacing ghost was seen stalking around and through the dilapidated adobe shanty. People attempted to investigate, but upon approaching (apparently near enough to speak) the apparition suddenly vanished, only to appear as quickly at some other point, lending would be captors on a lively and illusive chase.
Even today, ghost hunters and paranormal investigators flock to the Tombstone area to have a chance of investigating at the legendary haunted Brunckow Cabin.
The ruins of the Brunckow Cabin are identifiable, but are succumbing to the desert environment fast. In a few years, it is possible nothing will remain, so here is your chance to see where the legend of Tombstone Arizona began.
If you follow the trail for an additional half mile, you will find the ruins of another mine with the foundation of a small stamping mill. The whole area is a history lesson.
www.simpleweekends.com
You must log in or register to reply here.
Similar threads