Six days in The Maze (with some Arches to warm up)

Ever since enjoying several days in the Needles 12 years ago, I've wanted to see Canyonlands on the other side of the Colorado, and last fall I finally spent 6 days in The Maze. But before heading into the Maze we had an afternoon to kill and so we headed into Arches and caught sunset at Delicate Arch. 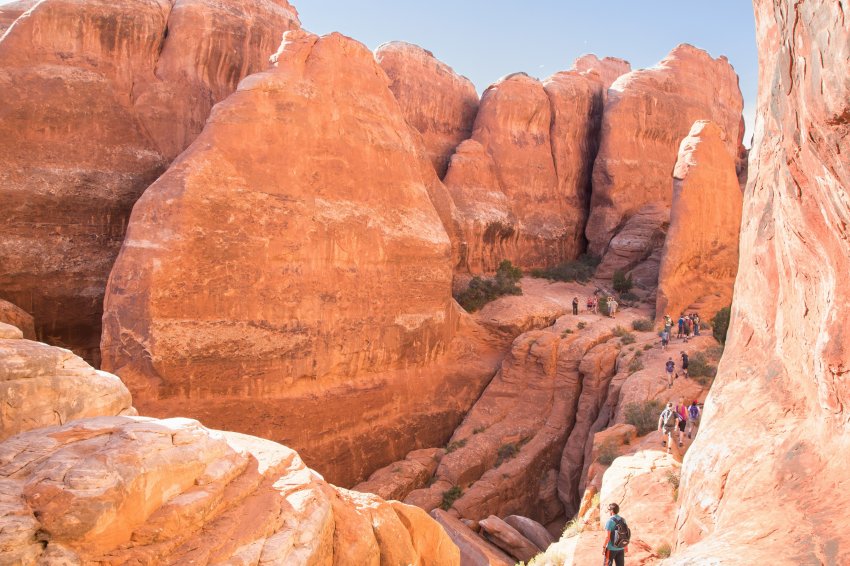 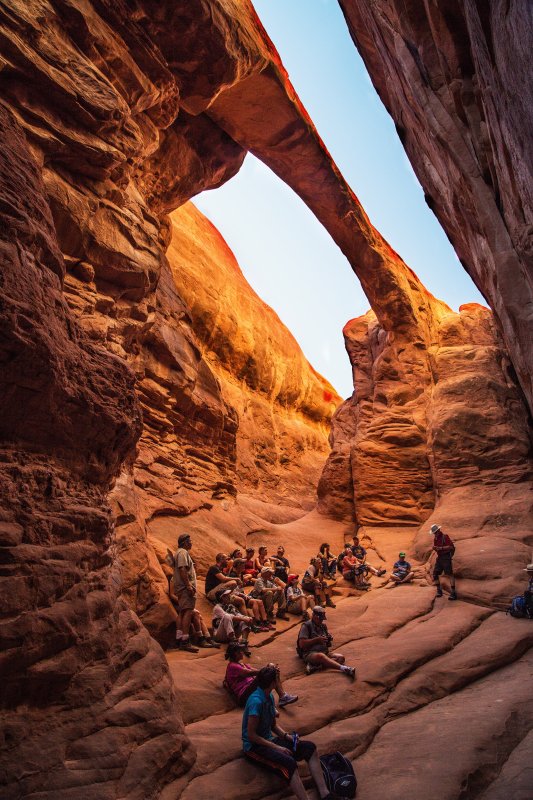 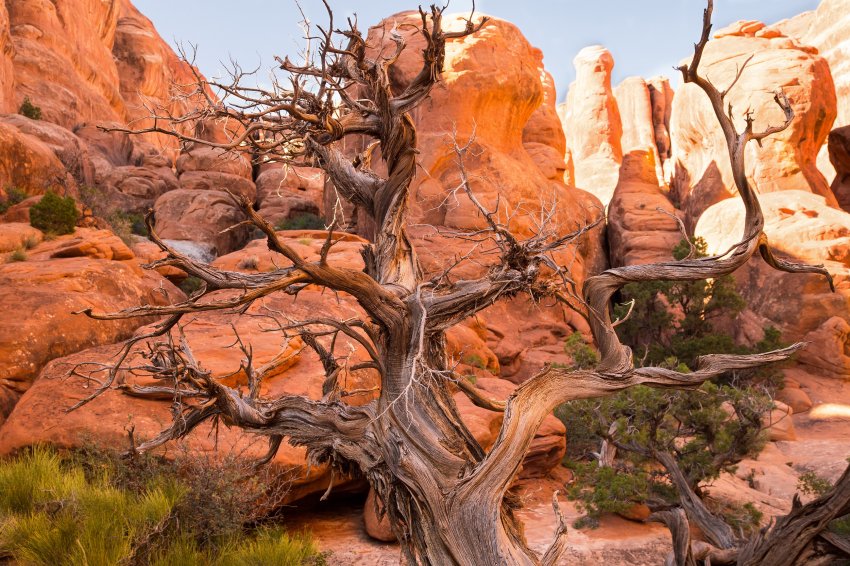 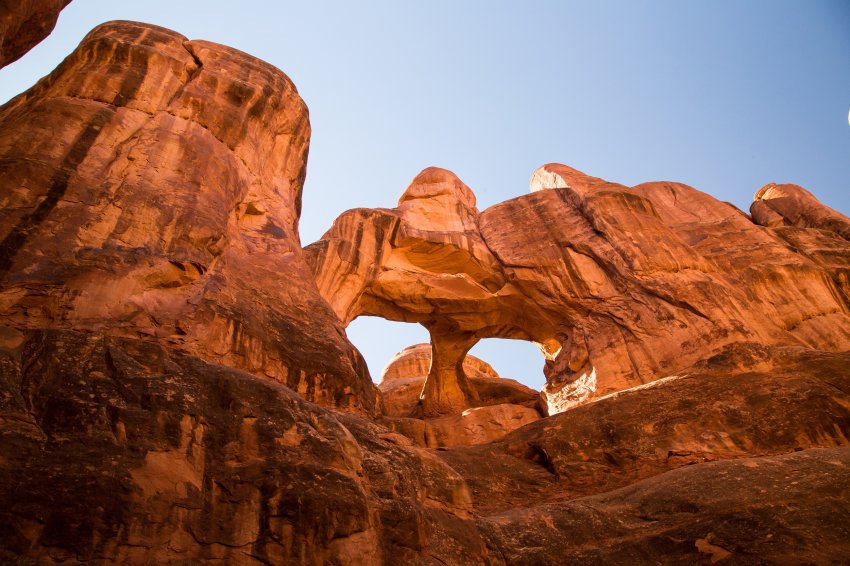 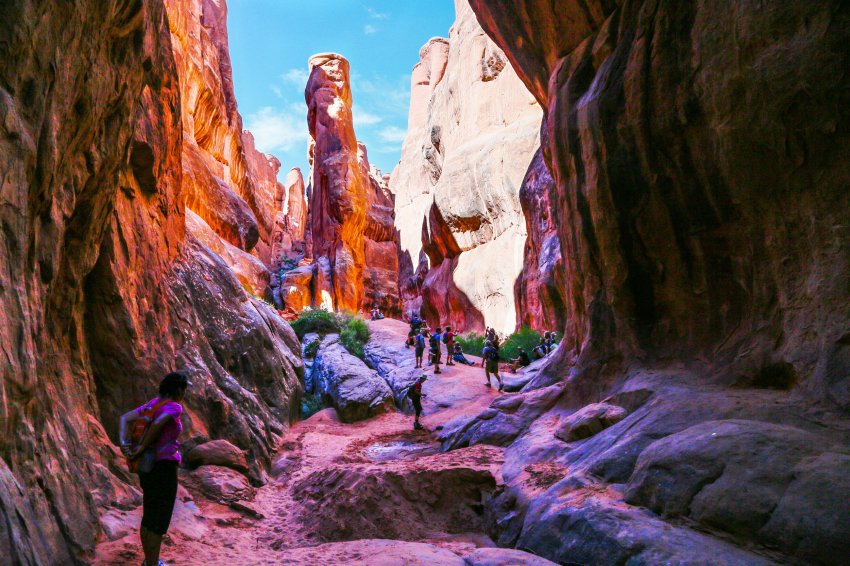 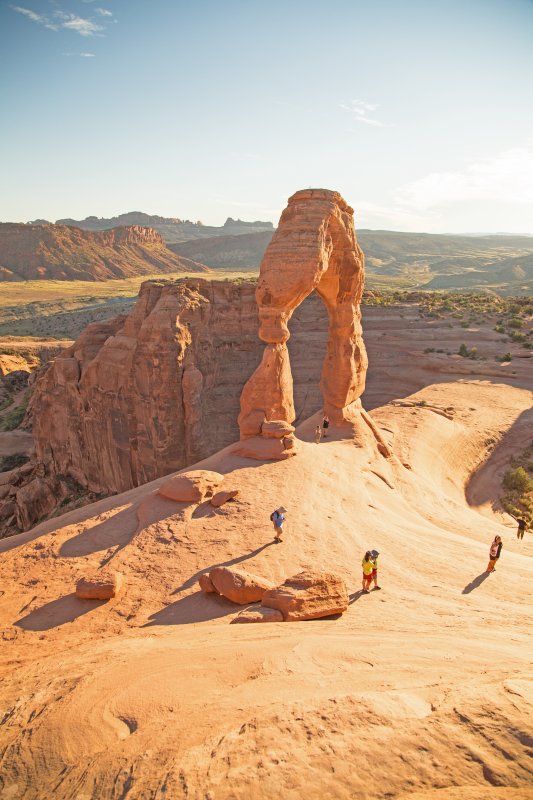 The day also reminded us of the importance of getting down the water for the half and full day hikes of the following 6 days in non-UK temperatures in the 90s.
Day 2 saw us visit Horseshoe Canyon before camping at High Spur - a fine panoramic sunset viewpoint
I wasn't aware of. 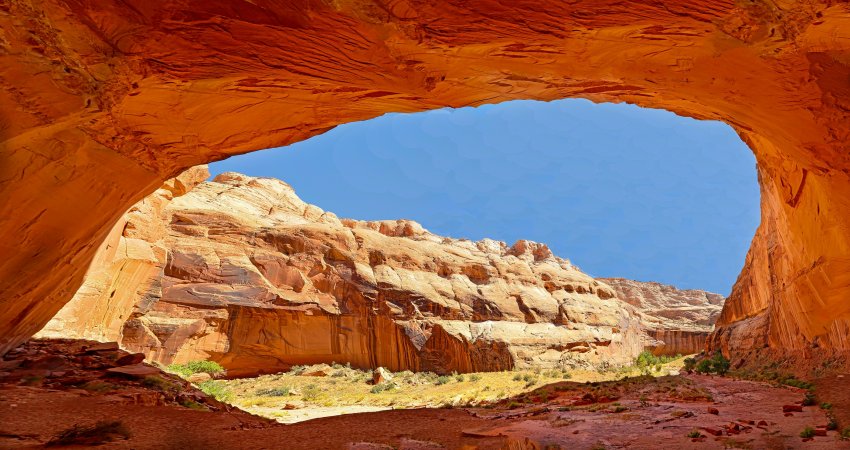 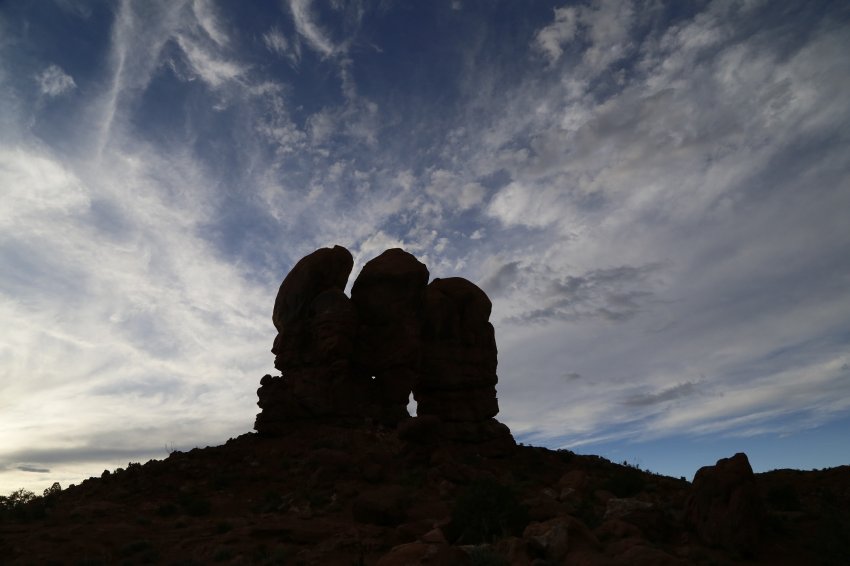 Unfortunately the predicted storms put paid to our canyoneering in High Spur the next day.
But at least the day wasn't the write off we expected. Just as we reached the top of the Flint Trail beams of sunlight came through and by the time we reached camp at Golden Stairs - not where we'd planned to camp - fantastic golden light kept improving on the distant Fins. Unfortunately, while I had a tripod out initially, after we then moved to a closer vantage point and the light got better I didn't set it up again meaning the images lack the sharpness I might have achieved. 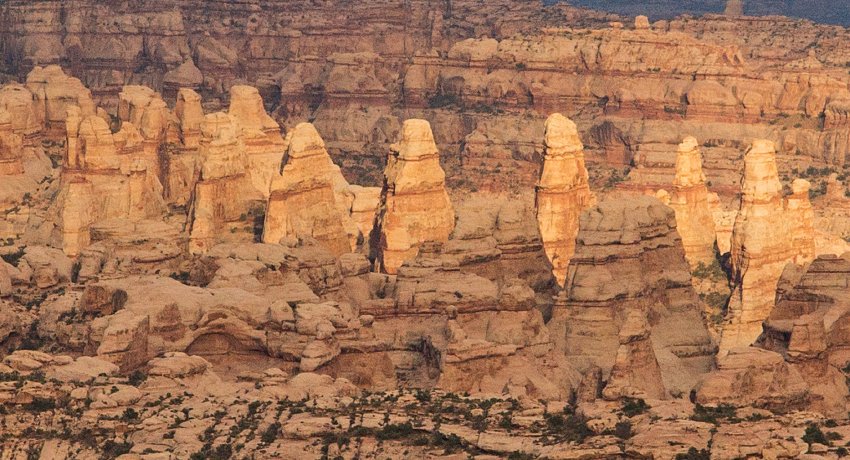 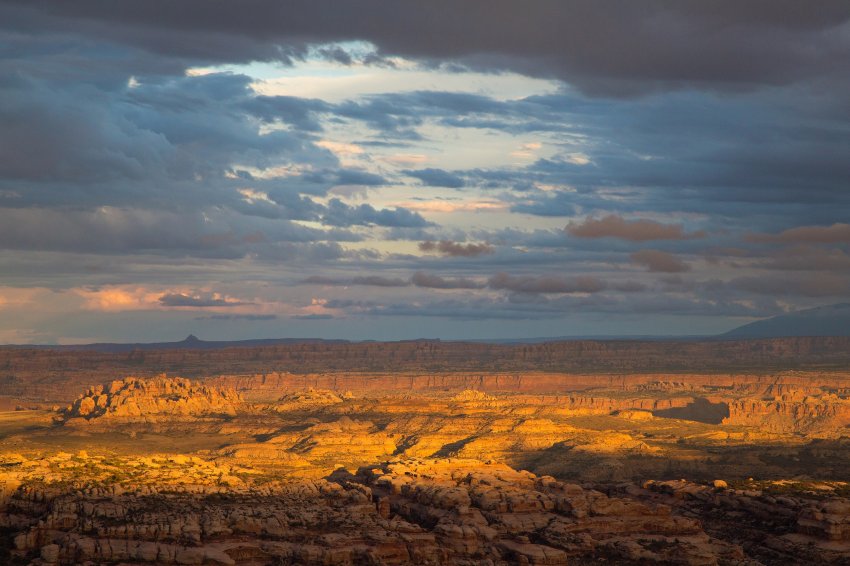 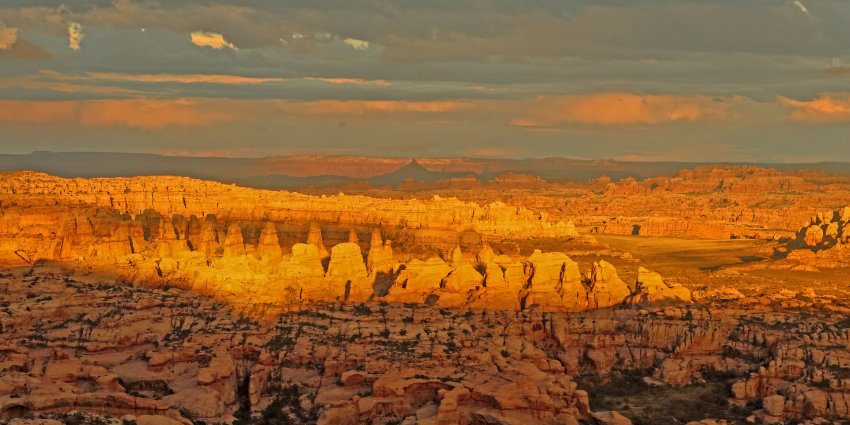 The cancelled canyoneering meant the following morning was a leisurely one flicking through Edward Abbey and Monkey Wrench books and the chance to reach the Maze Overlook well before dark. Shortly before the Overlook was a stop at the head of Horse Canyon.

As we reached the brow of the hill suddenly that breathtaking view opened up. Pictures don't do it justice 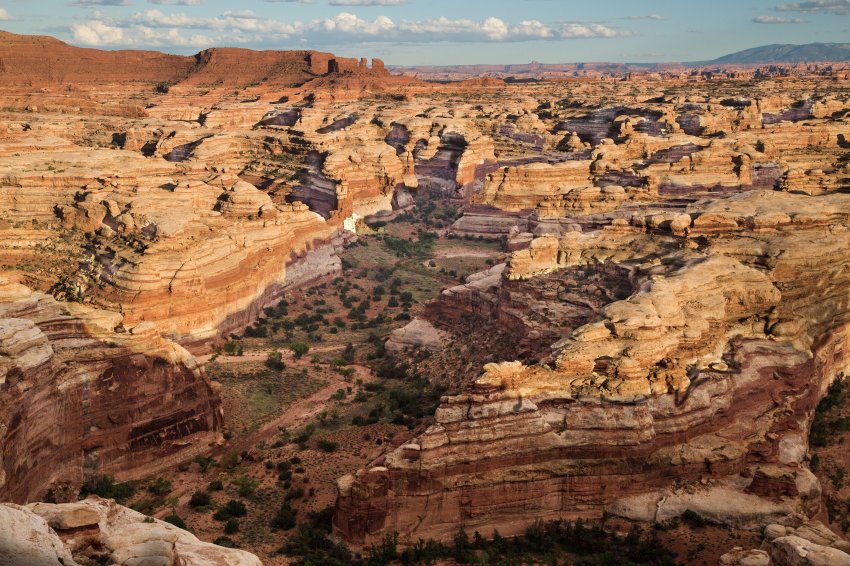 In the morning I woke up before dark just to walk the other way along the rim from camp before we had to head off. And as my friend remarked, it was the best groover view he will ever see.
To save enduring the slow drive round to the start of the Fins Trail, our driver dropped us off at the top of the Golden Stairs trail. It took quite a bit longer than we thought to traverse down the cliff and maybe wasn't the best idea as we then faced the first of several races against the clock to beat darkness falling. We had around 5 hours to do 12 miles out and back to see some great fins, including route finding and photos.
At our turnaround time we'd only reached the junction with the side canyon that contains the best fins, but we all realised we'd pretty much wasted our effort if we turned around then. "We'll give it 20 minutes" said our trip leader. It was almost a jog through the sand but as the views got better and better we kept going for 40, before stopping for another 10 to admire the view! 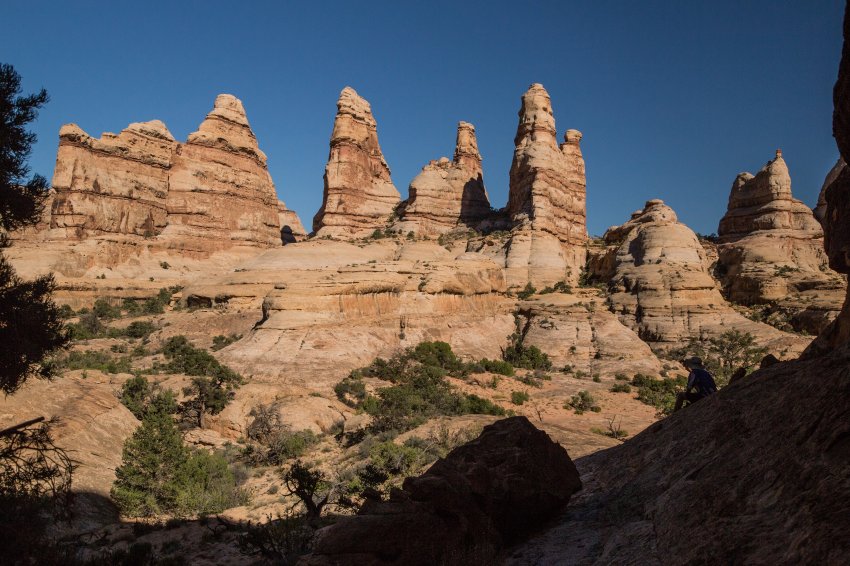 It would have been nice to have had time to explore further, but where we were may well have been the best bit.
The late turnaround for the "race" back was in cooler temperatures and we just beat the dark, but then drove straight past our Lizard Rock campsite.
Again what I thought was just a place to camp turned out to be a beautiful location come sunrise 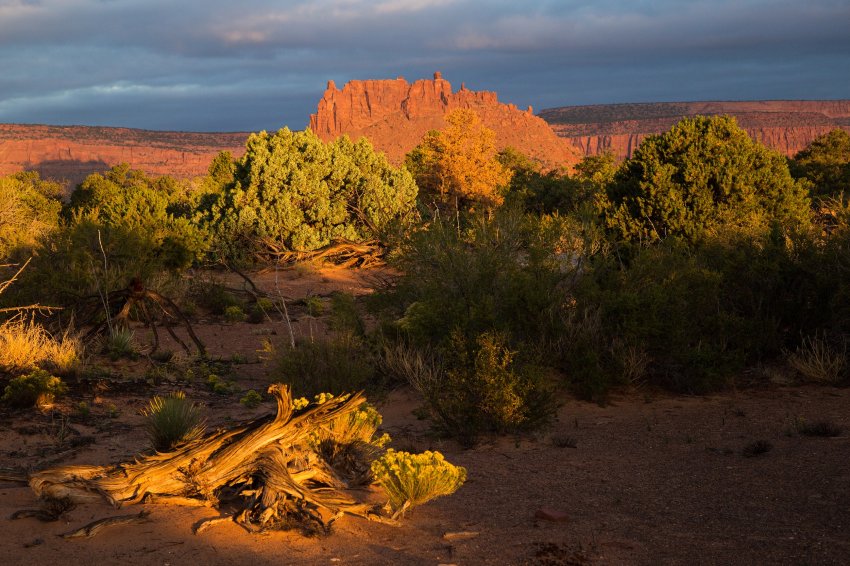 .
The next day we did the Pete's Mesa loop. It was hot. Knowing we were leaving the Maze the next day - and may never get to return - we still decided afterwards to also set off on the Chocolate Drops trail at around 4pm. I guess a 2nd 15 mile plus day in succession. Again we wanted to reach our goal and reached the drops, but realising we'd maybe overdone it we didn't risk looking around much beyond the first Drop, which was a shame, but at least we got there. This time it was dark before we made it back to the trailhead but our head torches got us through that last 10 minutes.
Our final day, after an hour in the Dolls House, 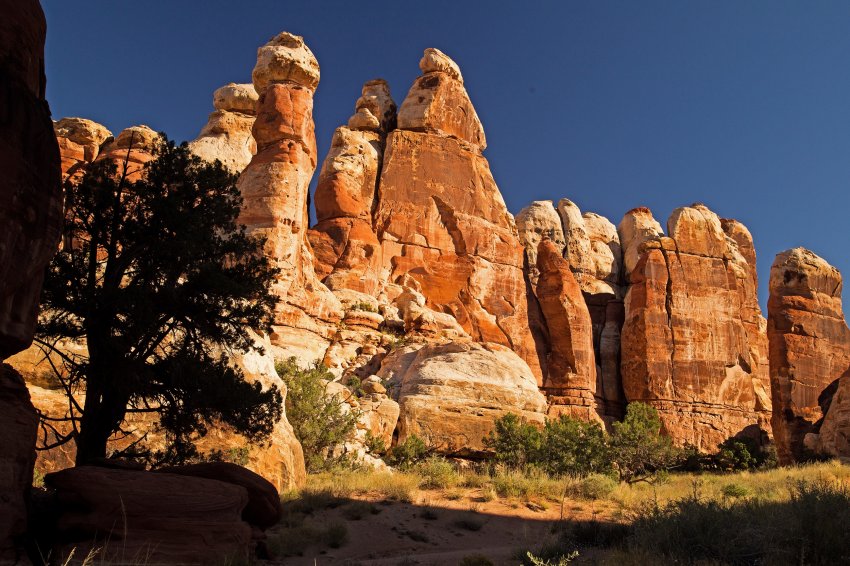 we met our rafting boat at Spanish Bottom for the Cataract Canyon trip down to Hite. And here's one looking over Dead Horse Point on the return to Moab 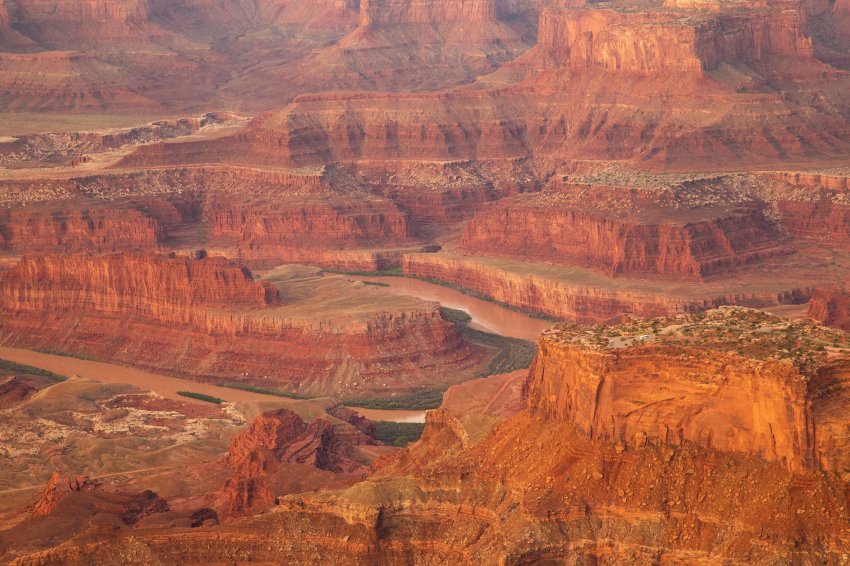 Sweet! I'll be in The Maze in a few weeks. This makes me even more excited. Looks like a great trip. Thanks for sharing!

U saw some of the best in Utah! Thx.

Wow, absolutely beautiful!
You must log in or register to reply here.
Similar threads