Last week I took a week long road trip up to Nova Scotia, Canada. The main purpose of my trip was a 4 day backpacking trip on Cape Chignecto, Nova Scotia. This is just a short report of some of the other stuff I checked along the drive up. I'll do a more in-depth report of my actual backpacking trip in another report.

On the morning of Wednesday June 27th I left my home in New Jersey for Nova Scotia. It would be a 14 hour drive not counting any stops. I didn't know how long into the night I'd be able to last and how far north I'd make it my first day. I ended up making it through NY, CT, MA, NH, up the coast of Maine, through customs and into New Brunswick, Canada that first day. I wanted to stop at either Fundy Provincial Park or Hopewell Rocks Provincial Park along the way. I decided on Hopewell Rocks Provincial Park since it's a much smaller park and I only wanted to stop for a few hours. Since Fundy Provincial Park has a backpacking loop I'd like to do another time, I decided I'd save that park for another trip.

Hopewell Rocks Provincial Park is located in New Brunswick, Canada along the Bay of Fundy. The Bay of Fundy has the largest tides in the world. Whereas the average tidal range (vertical rise and fall) is 2 feet, the Bay of Fundy rises and falls 53 feet (the height of a 5 story building). That equates to over 160 billion tons of water flowing in and out of the bay every 6 hours. That exceeds the amount of water that flows through all of the world's freshwater rivers and streams in the same time period. As you would imagine, that much water movement creates some interesting coastal erosion over time. Since Hopewell Rocks is located in a narrow and shallower strait in the Bay of Fundy, the massive amount of water displacement churns up so much silt that the water is brown in color. Between the erosion and the brown silty water, you could say that the Bay of Fundy is the oceanic version of the Colorado River.

The park has a small trail system, but the real highlight is walking along the coast to view the formations which the park calls flower pot rocks. I took a short trail down to the beach to check them out. It was low tide when I was there so I was able to walk among the formations and get up close. During high tide, the flower pots become flooded around their base and become tiny islands. 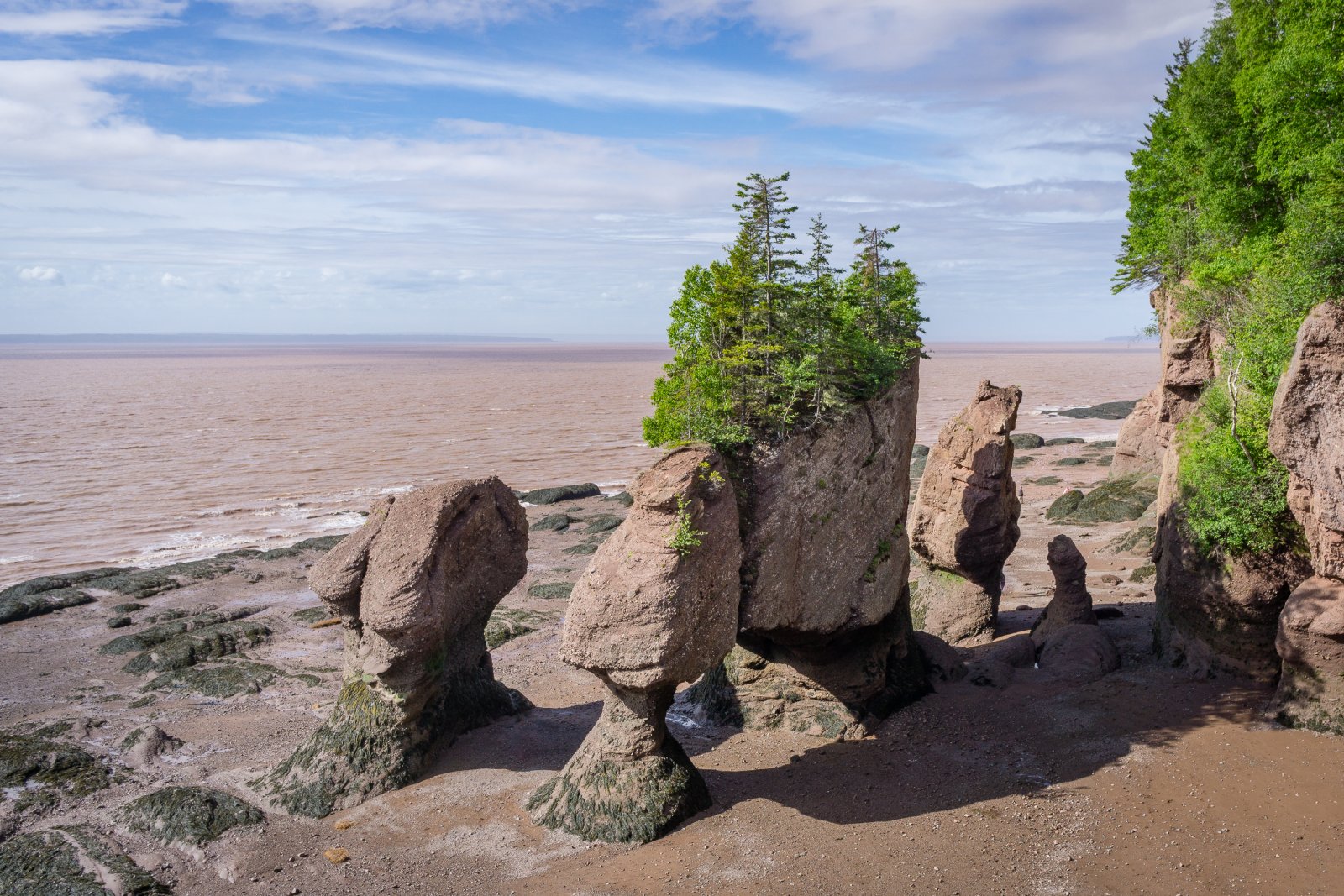 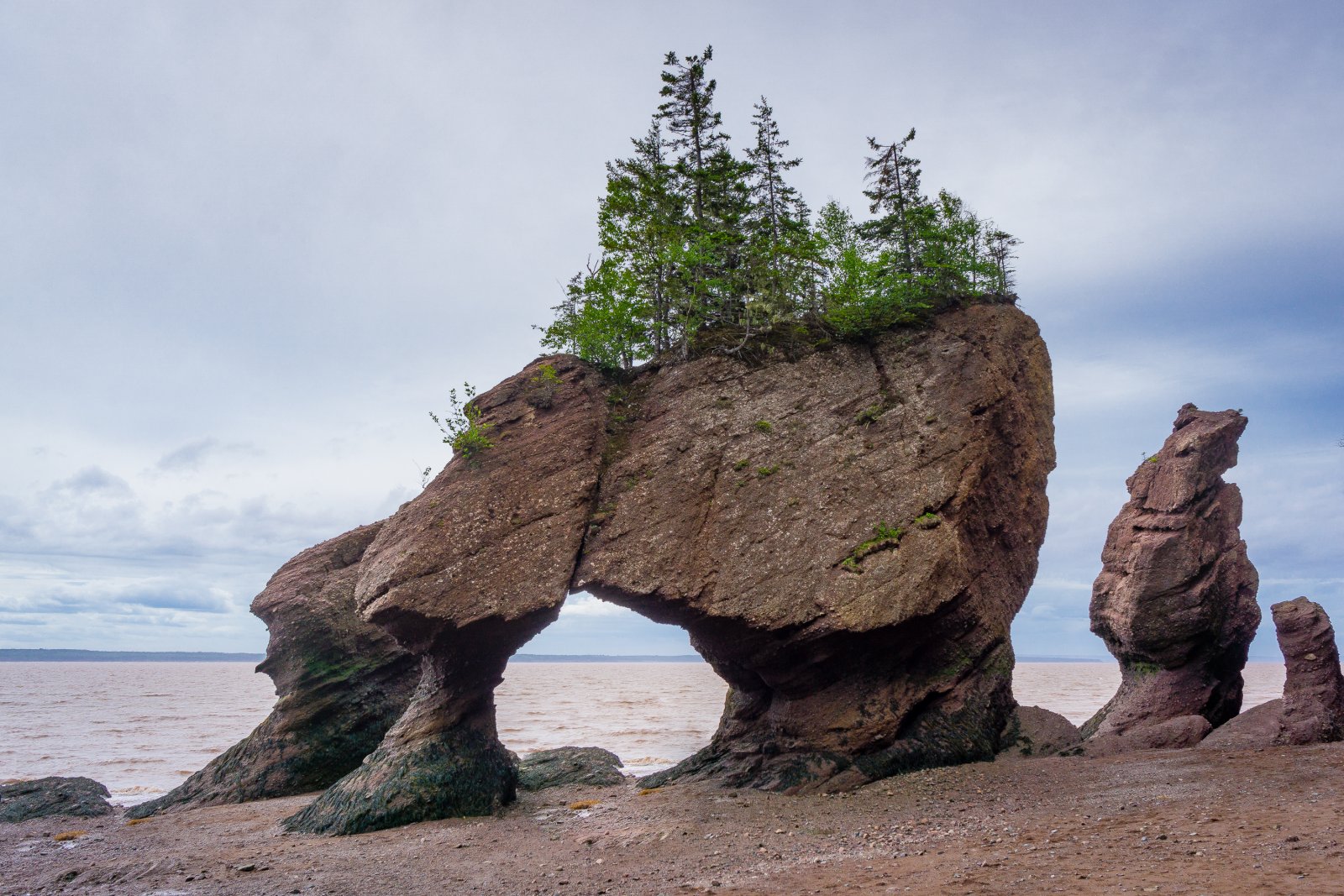 I included this picture below with people walking around to give scale to the size of some of these formations. 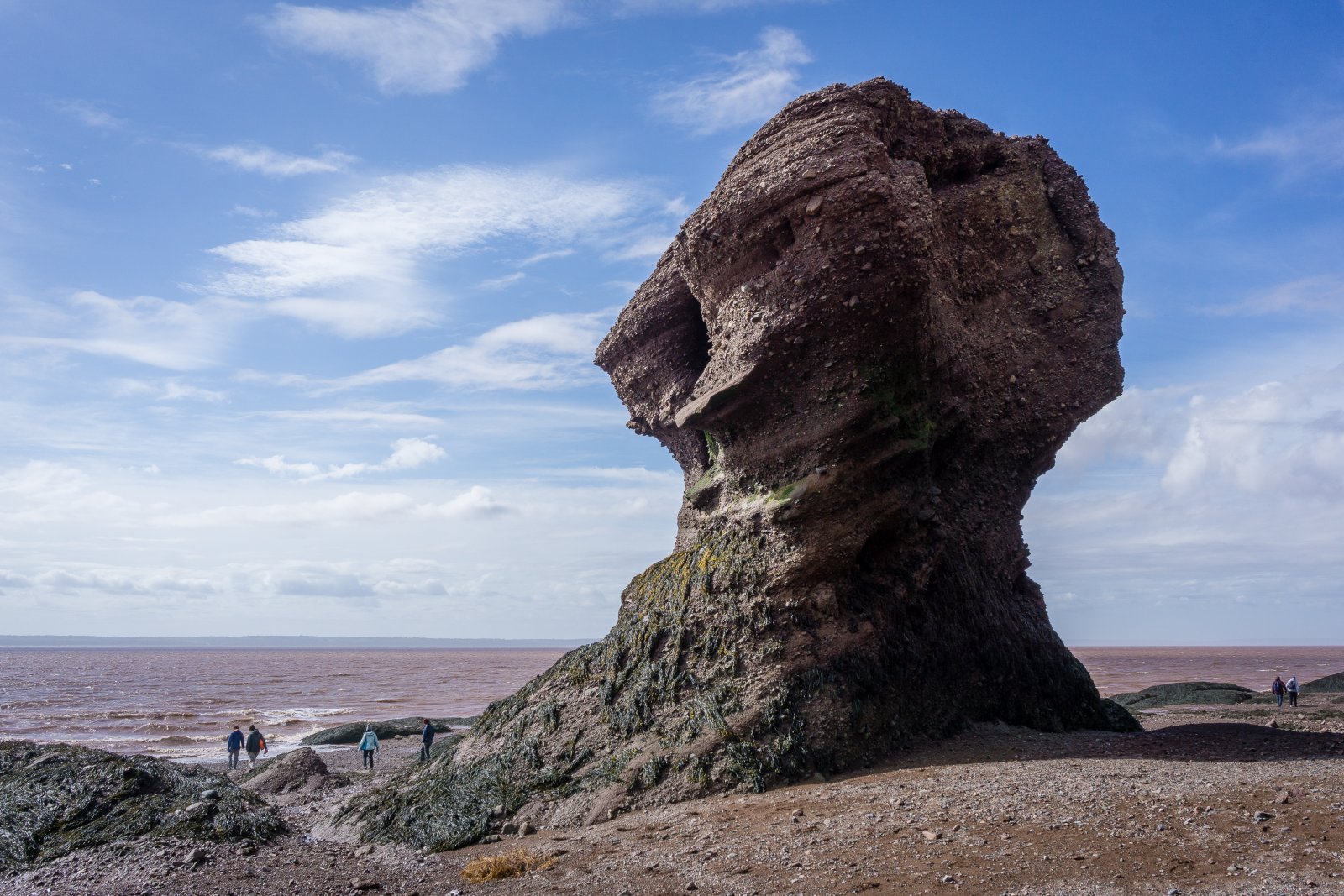 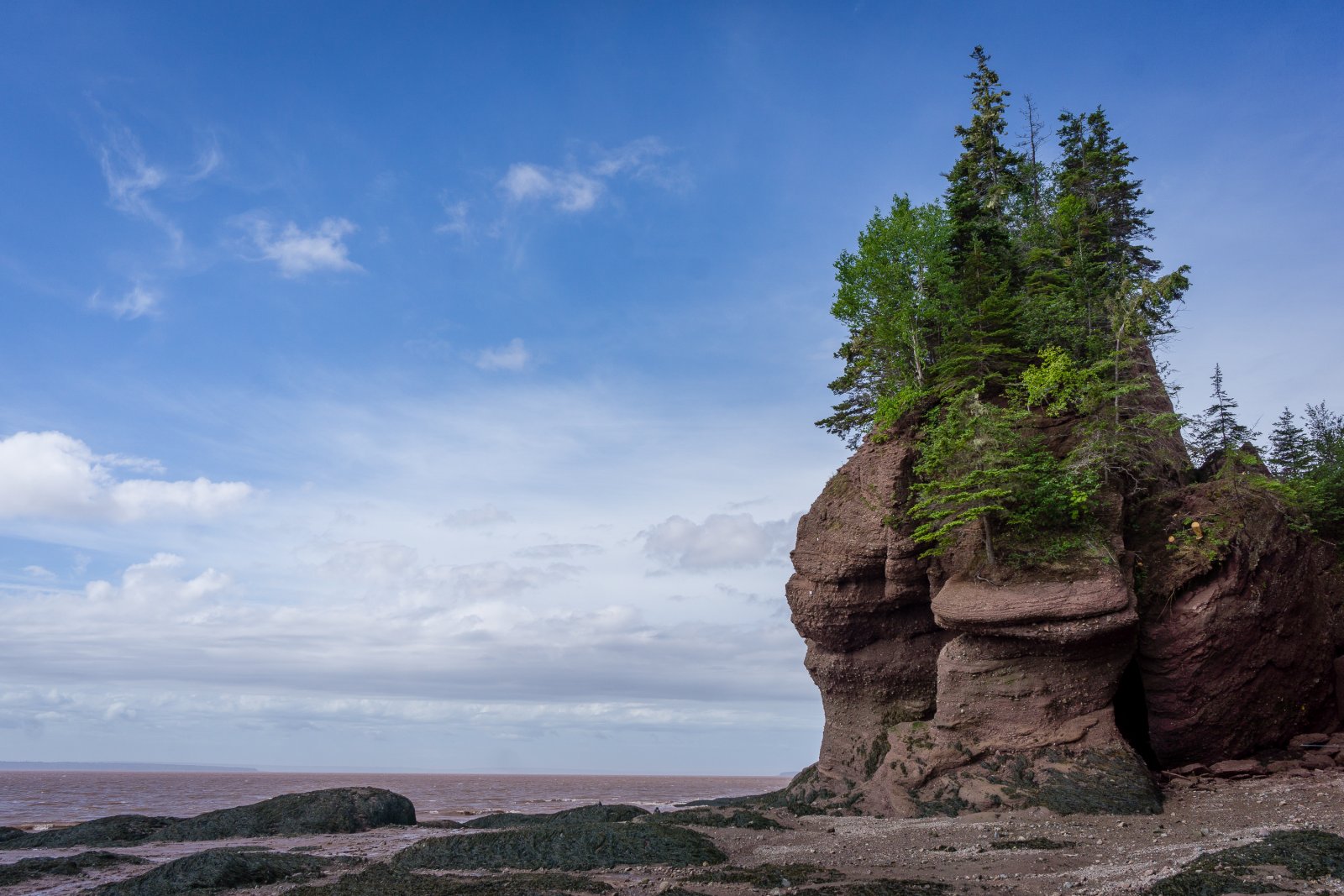 Looking out from one of the many little coves. 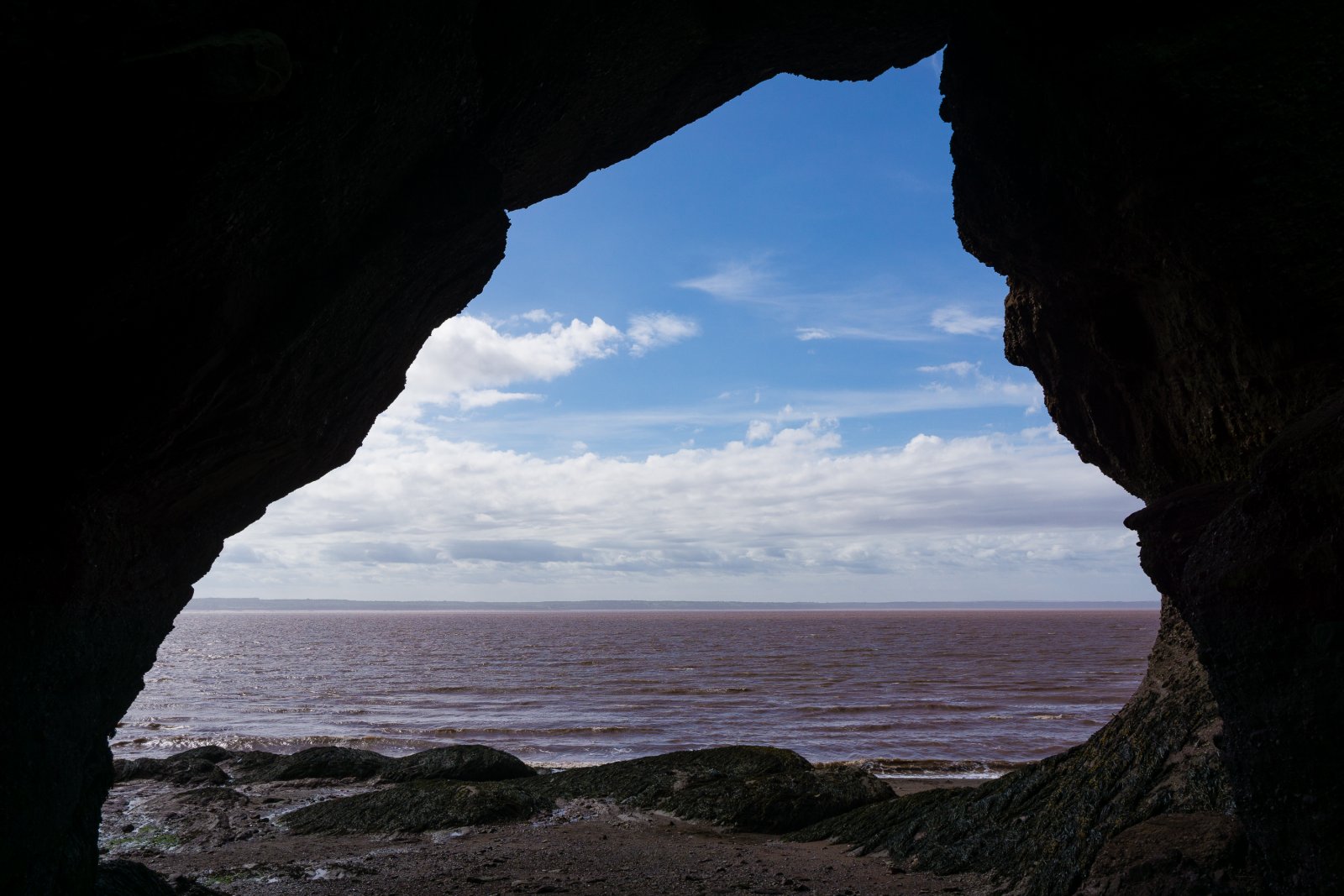 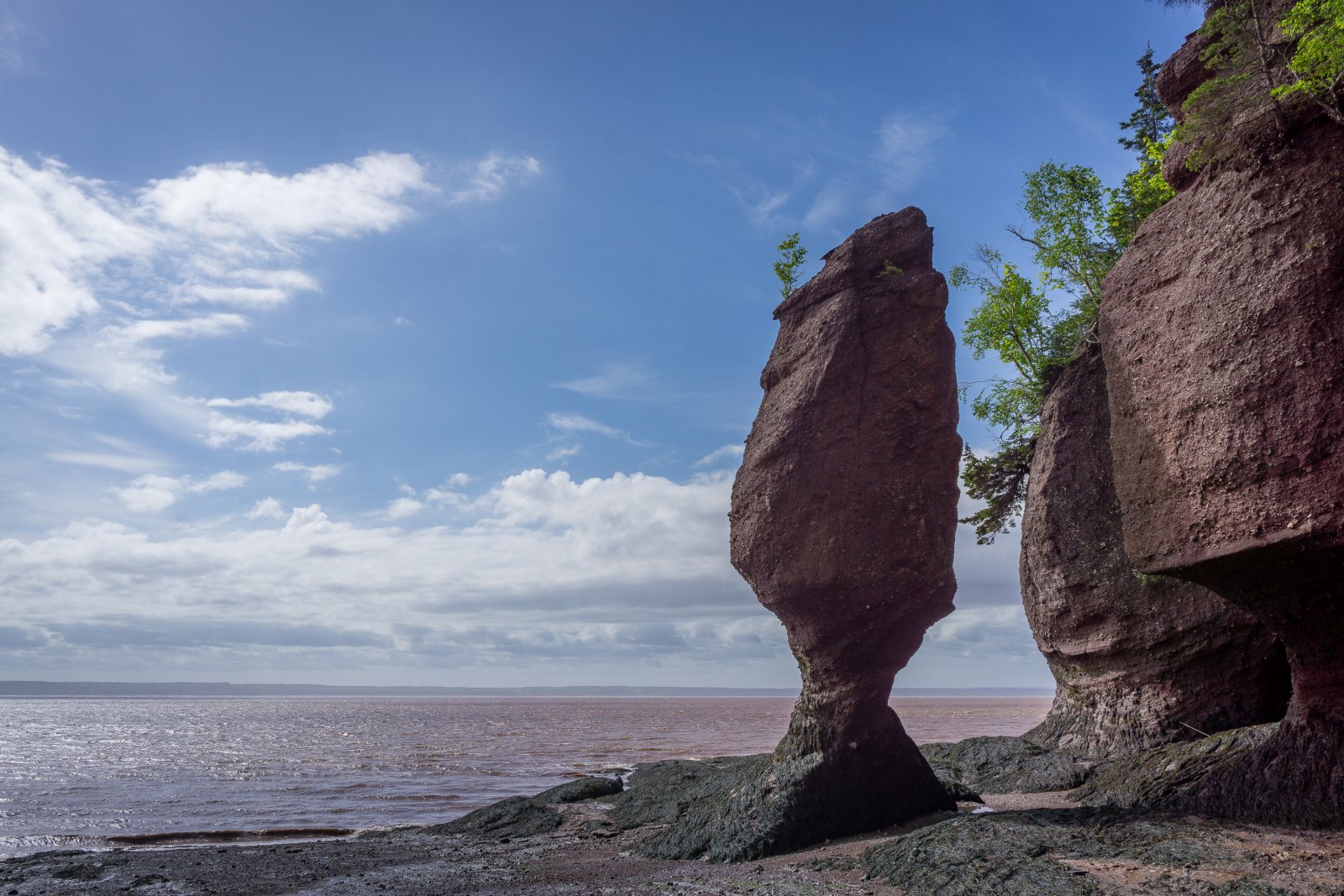 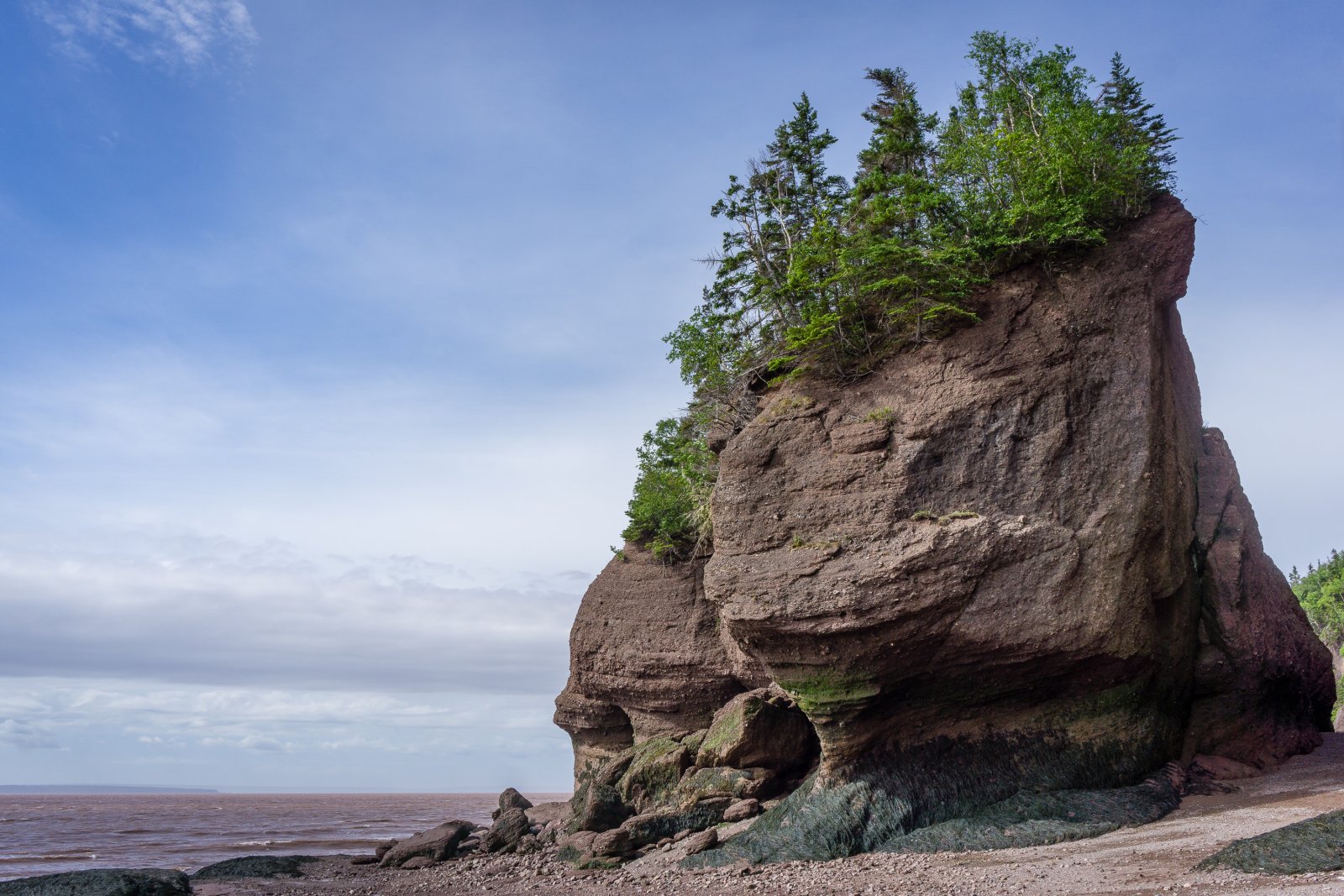 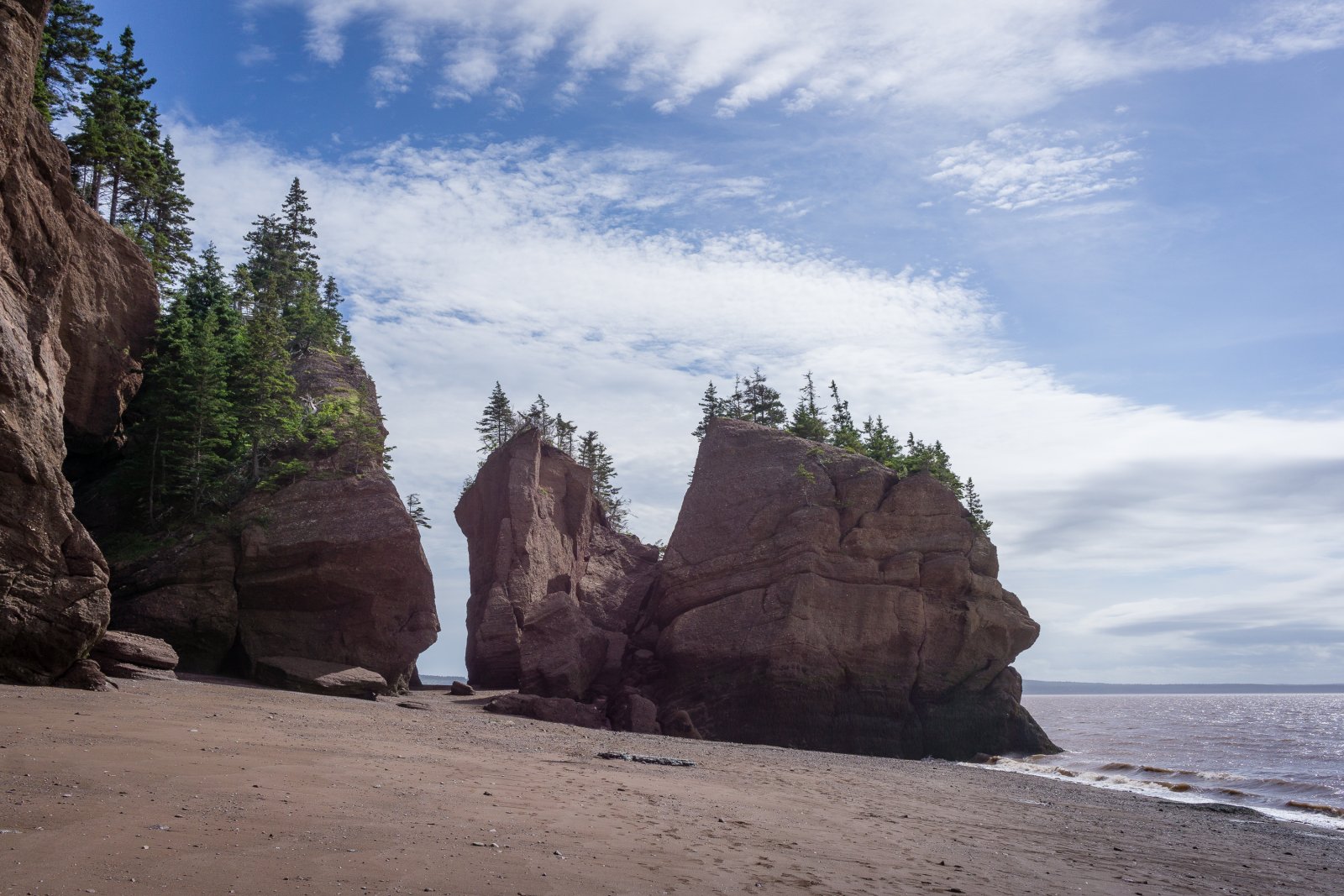 After leaving Hopewell Rocks Provincial Park I continued my drive to Nova Scotia. It would only be about 2.5 more hours to my destination. Once I made it to Nova Scotia, I saw signs for a place called Cape d'Or. I had never heard of it but figured I'd check it out since it was along the way. It turned out to be a few short trails along a cliff on the coast, one of which led to a small little lighthouse on a cape. The cool thing about walking out onto the tip of the cape was that it gave a nice view of the cliffs along the coastline. I noticed that the water on the Nova Scotia were was not brown like it was near Hopewell Rocks in New Brunswick. 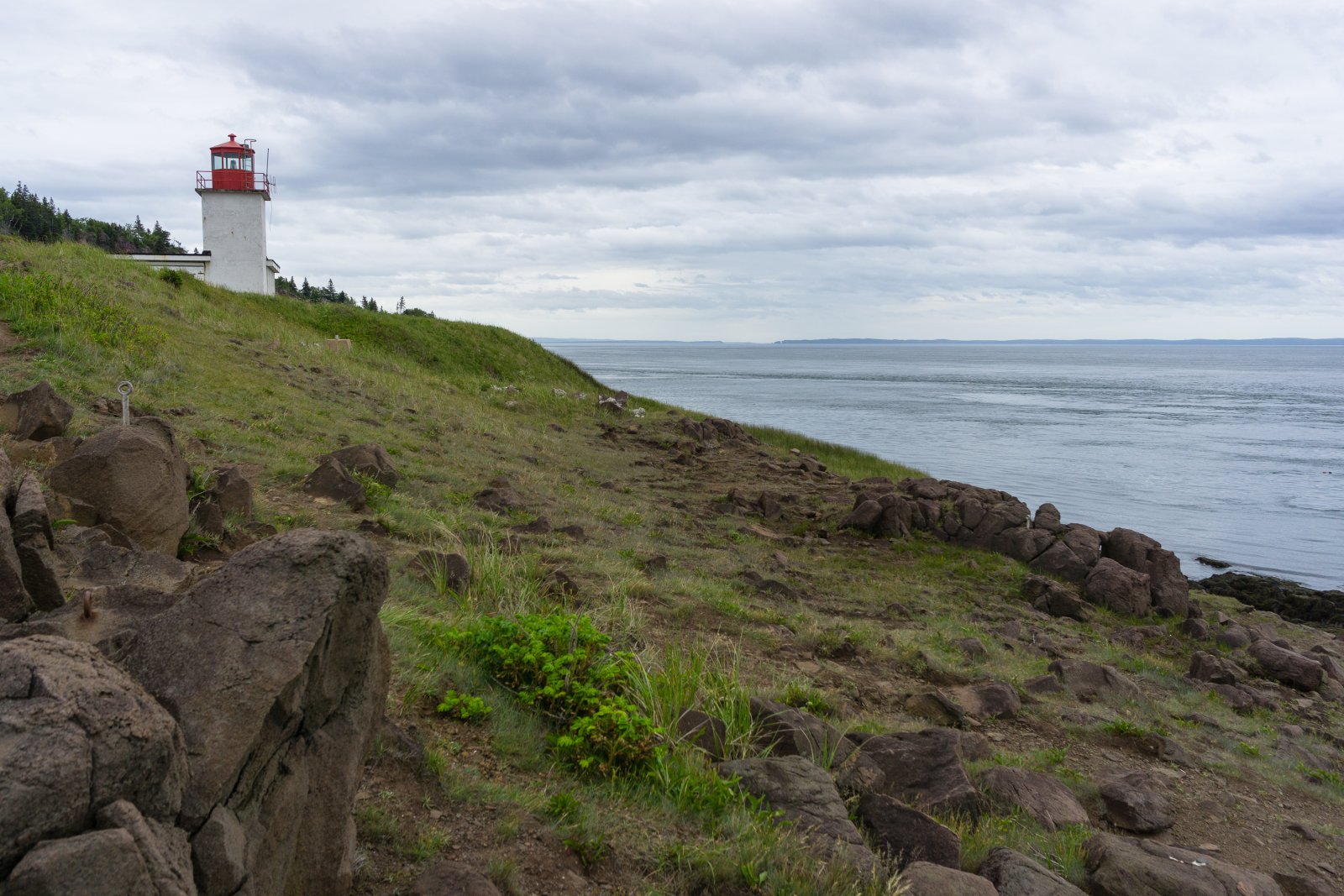 My first real glimpse of the rugged Nova Scotia coastline. 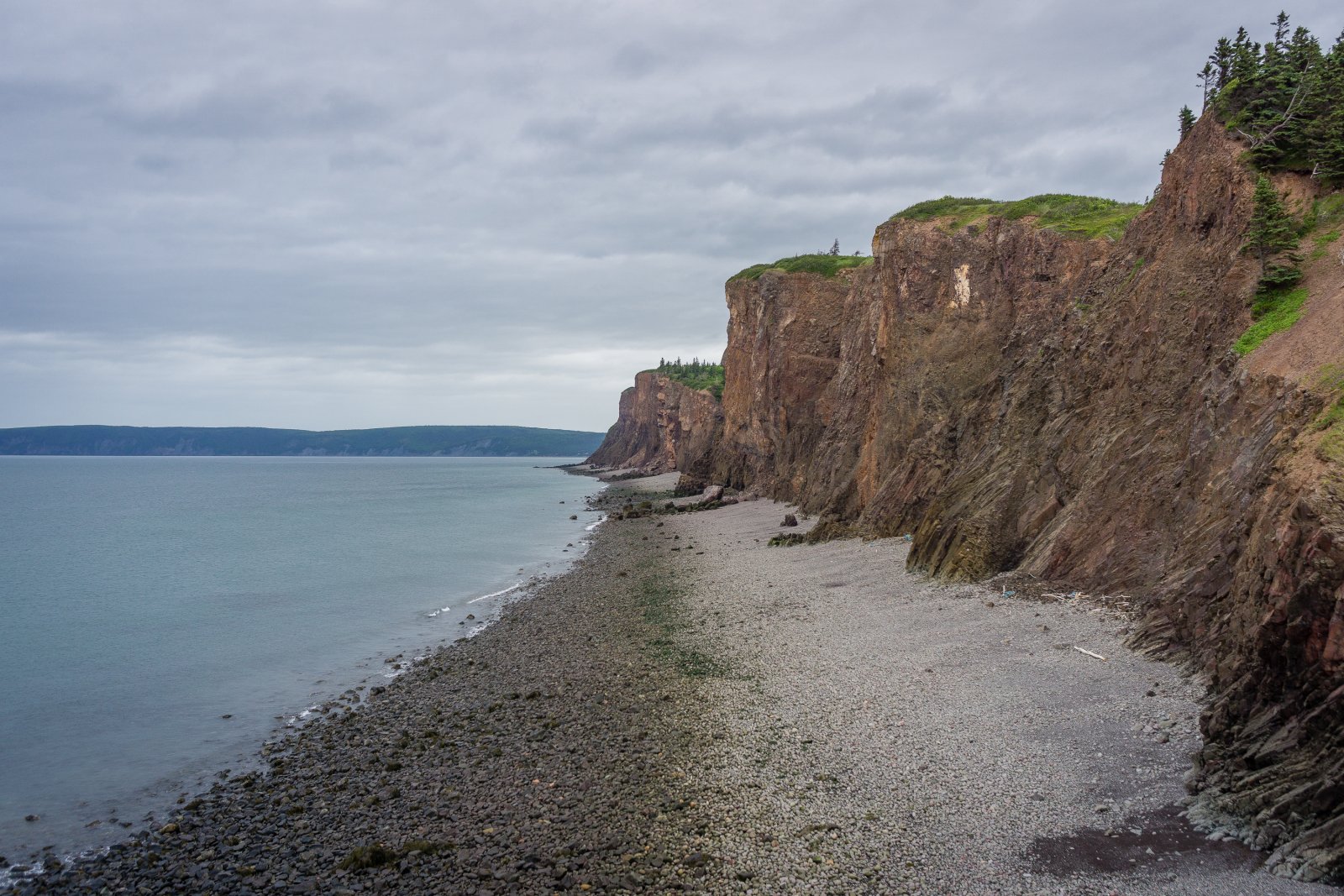 And of course I need to include a picture of my trusty travel companion. 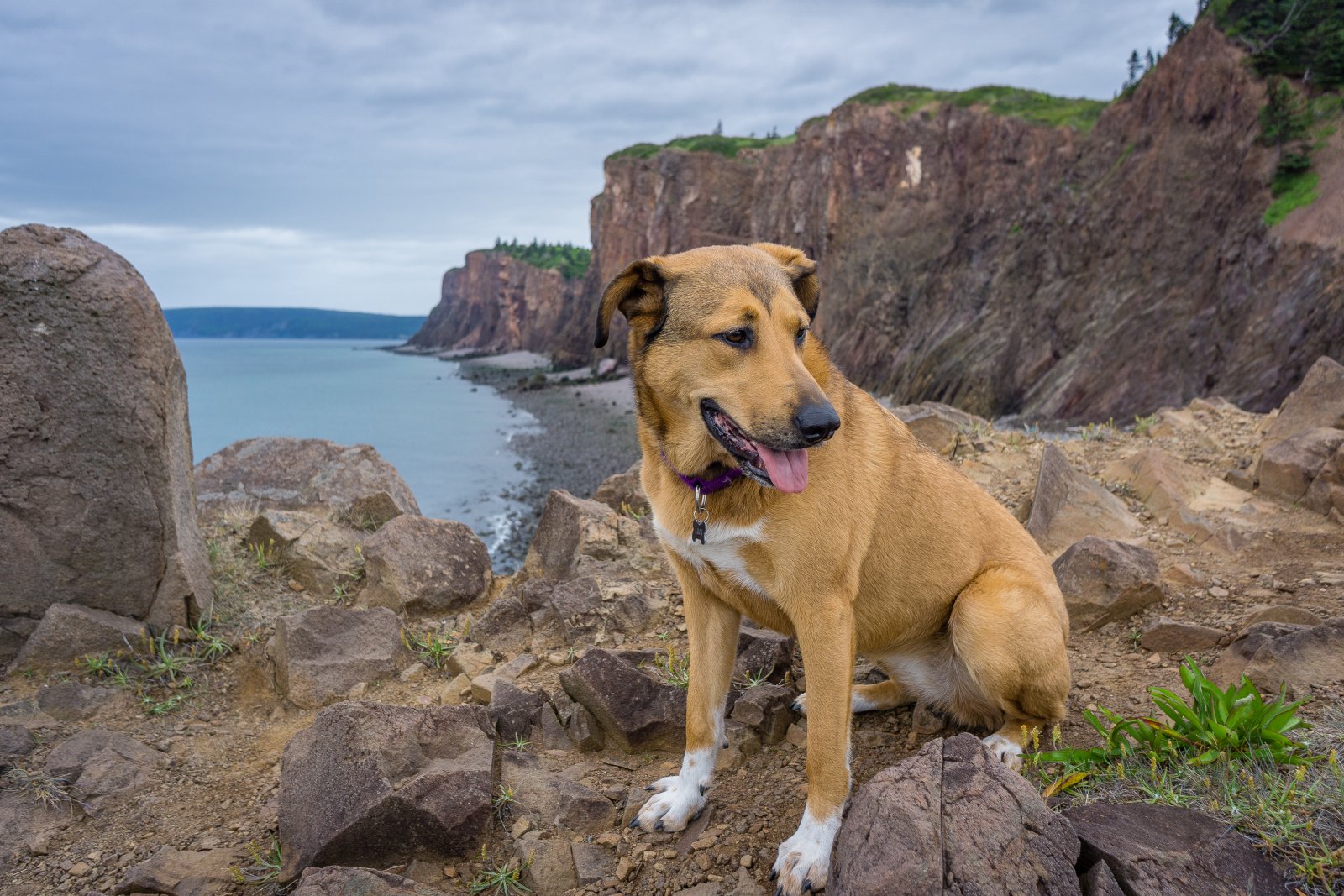 After leaving Cape d'Or I headed to the Ranger Station at Cape Chignecto to check-in and pick up my permits for my backpacking trip which I would be starting the next morning. The drive up was pretty cool but the backpacking was amazing. I'm hoping to have time to put together a trip report of the backpacking portion of my trip in the next week or so.

Thanks for checking this out.
John

I just looked through my cell phone and found a few interesting iPhone pics from the drive up... 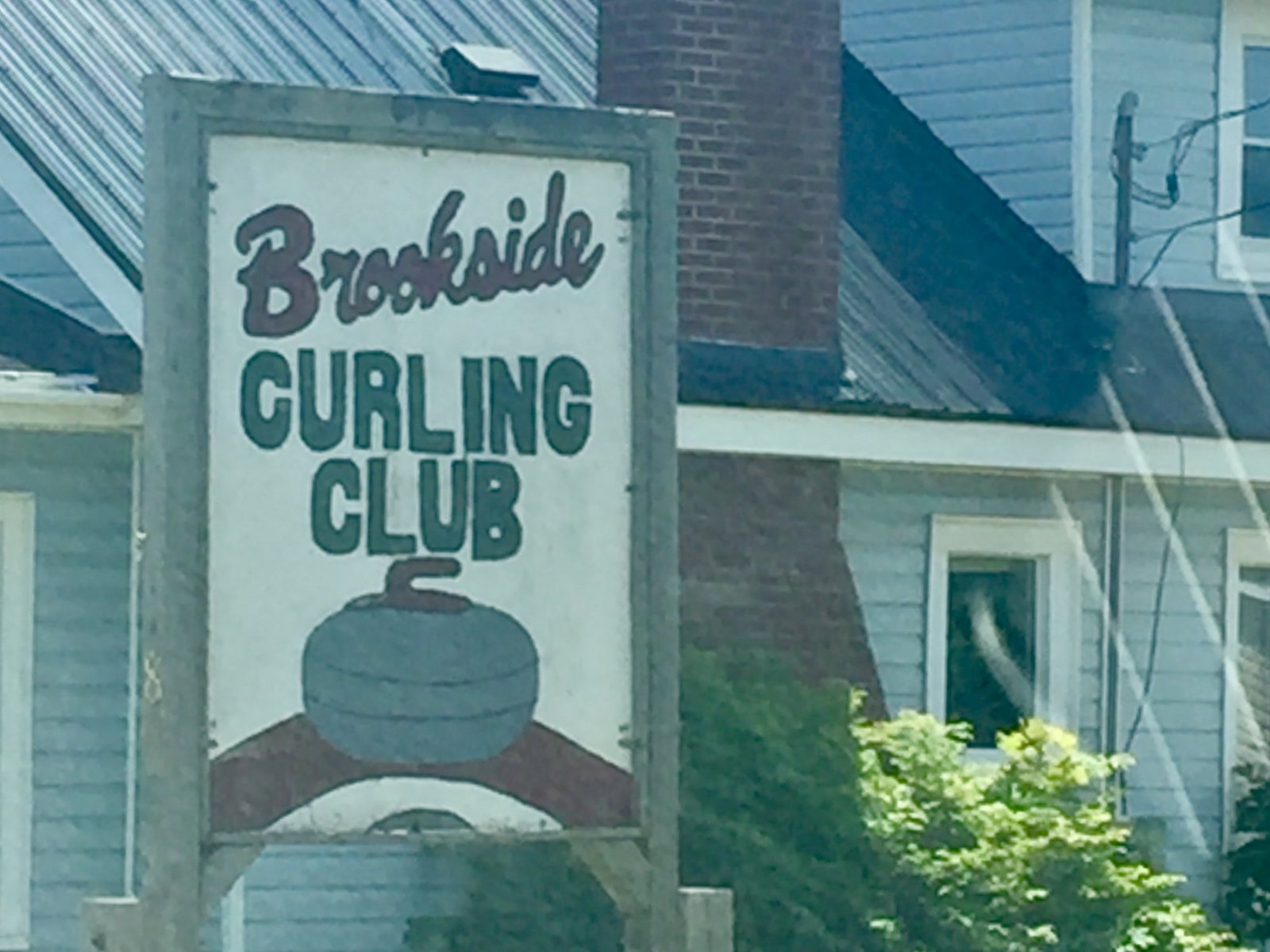 After sleeping with my food in my tent vestibule every night, I saw this guy cross the street 10 minutes from the Park entrance on the drive out... 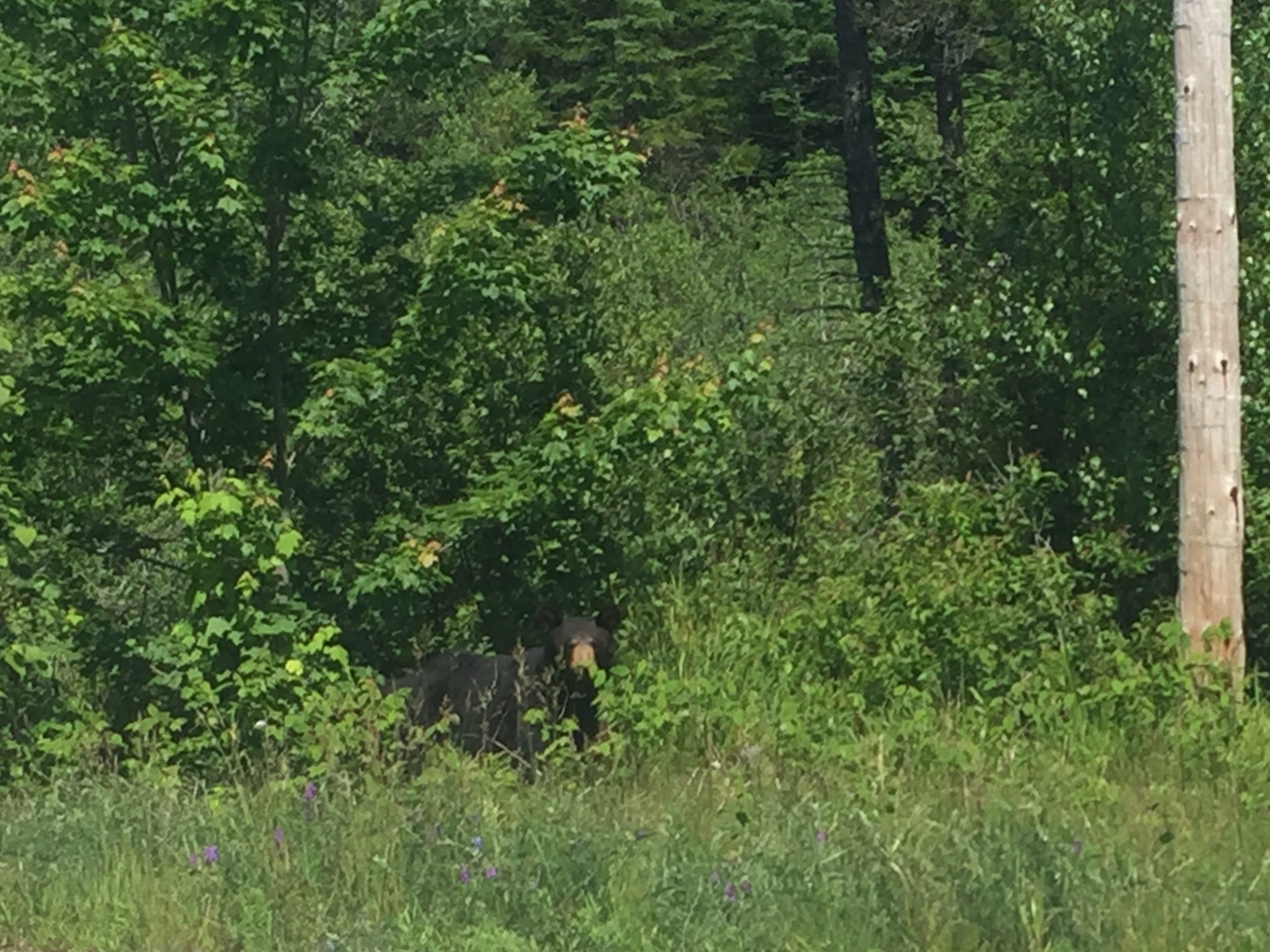 This one made me LOL.. pretty sure it’s self explanatory... 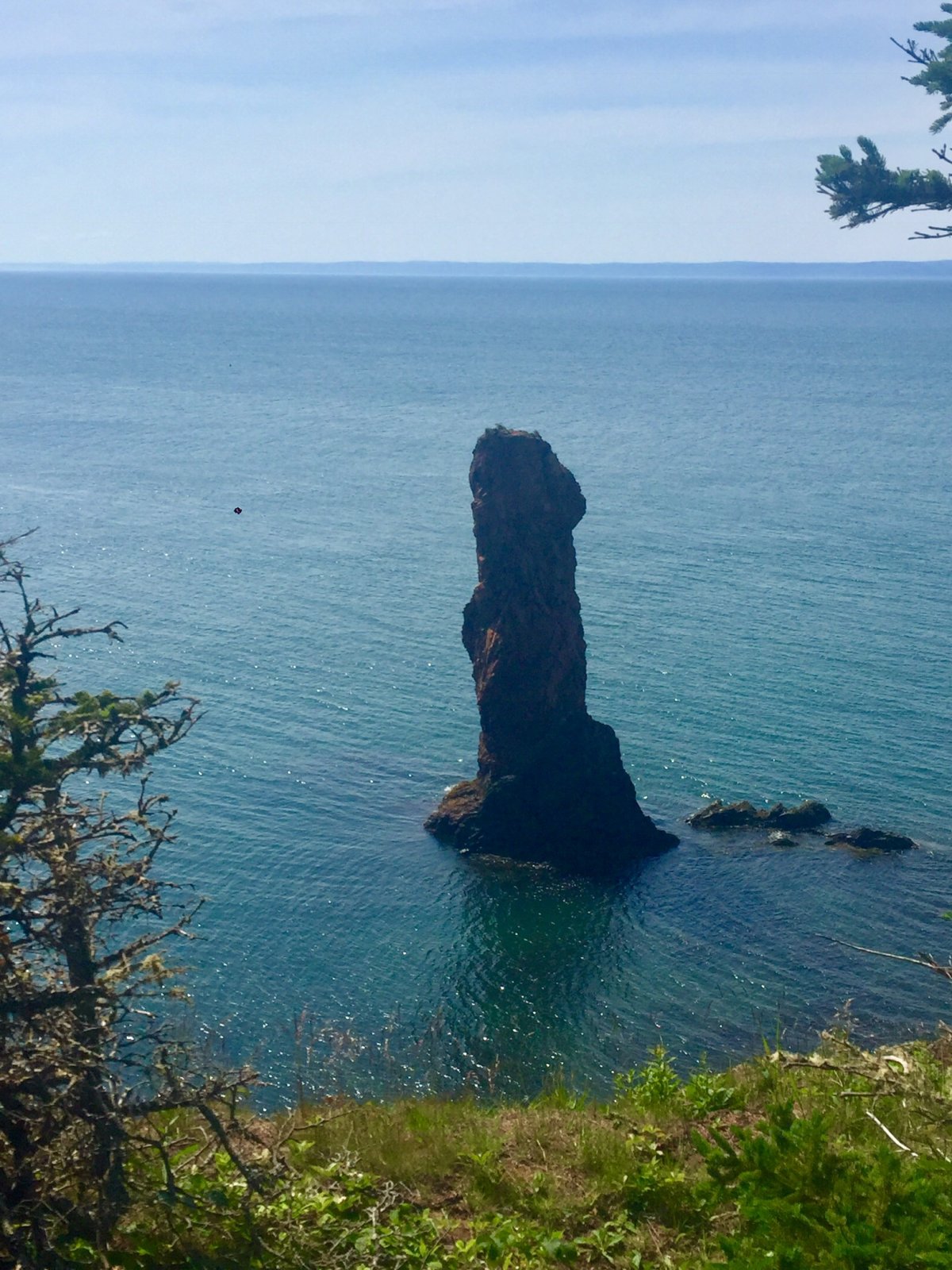 Wow! I feel like I would never think or care to stop at the Bay of Fundy. But those formations are really cool and now I want to go!
I need you to explain the self-explanatory picture...lol JK JK!
Thanks for sharing, cannot wait to see the backpacking trip report!

Miya said:
Wow! I feel like I would never think or care to stop at the Bay of Fundy. But those formations are really cool and now I want to go!
I need you to explain the self-explanatory picture...lol JK JK!
Thanks for sharing, cannot wait to see the backpacking trip report!
Click to expand...

Thanks, these stops were a nice way to break up the long drive. Will write the real report soon.

What a cool place!

Sometimes it's an adventure getting to your adventure.

Can't wait to see the rest.
Do not pray for easy lives. Pray to be stronger men. - JFK
Orem Chiropractor

Very excellent! Waiting for the rest. I've always wanted to go to Nova Scotia... so many places so little...
Love the pics and report.

I've wanted to see the Bay of Fundy since I first heard about the tides when I was about 10 years old (a long time ago). My wife and I have been talking about a Nova Scotia road trip since 2006 when we drove to Alaska.

thanks for the photos, looking forward to the backpacking trip report
My trip reports: backpackandbeer.blogspot.com 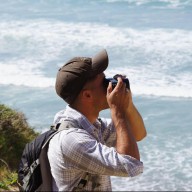 Beautiful picture of your dog!!! And the curling picture made me lose it hahaha
My Outdoor Blog: Seek Adventure

That fact about Fundy tides is incredible! What a beautiful coast line there! Looking forward to the trail TR now too.

Whoa..... More than 15 meters difference between the tides!!!. Haven't heard about that since standing at Mont St-Michel in Normandy, France.
Really cool photos of the rocks. Thank you for putting this on my radar screen- it's only a 10 hour drive from us. We need to spend more time in Canada.
Thank you for sharing.
You must log in or register to reply here.
Similar threads