Although this isn't really backcountry, I thought it might be of interest to some. I had done the rim to rim before but wanted to do it with my son so I managed to get the permits for:
Day 1: down the South Kaibab to the river and Bright Angel (just south of Phantom Ranch) for night 1.
Day 2: up the North Kaibab to Cottonwood for night 2.
Day 3: Out to the north rim.
Our itinerary was camp on the south rim on Saturday night, hit the trail via the 5 am hiker shuttle and then proceed with the hike Sunday thru Tuesday. We spent Tuesday night on the north rim with the joy of a great meal at the North Rim Lodge (Reservations REQUIRED - and I had made them).

I was thinking that this was at least a bit of an accomplishment for an old man but now the rage is rim to rim to rim in ONE DAY!!! Evidently there were like 1000 rim to rim to rim hikers out there on this past weekend. At this point these folks don't need a permit as they don't use the camp grounds and are considered day hikers (this will likely change soon). The traffic sometimes got a bit annoying but we were lucky in that we went down the south Kaibab and I think many of the thru folks used the Bright Angel.

Day 1: Down the Kaibab
Nothing really exciting except the views from this trail are exceptional as it spends a lot of the time on a ridge. See following pictures: 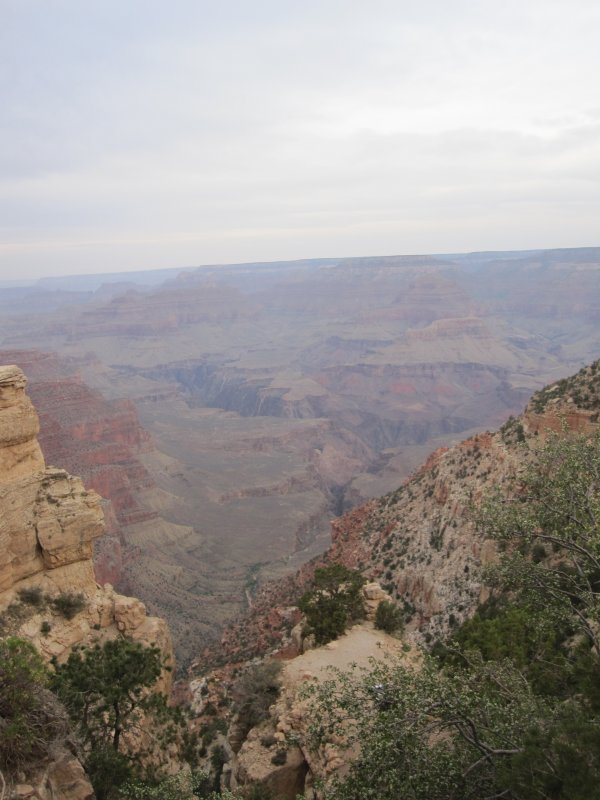 Early view from the South Kaibab 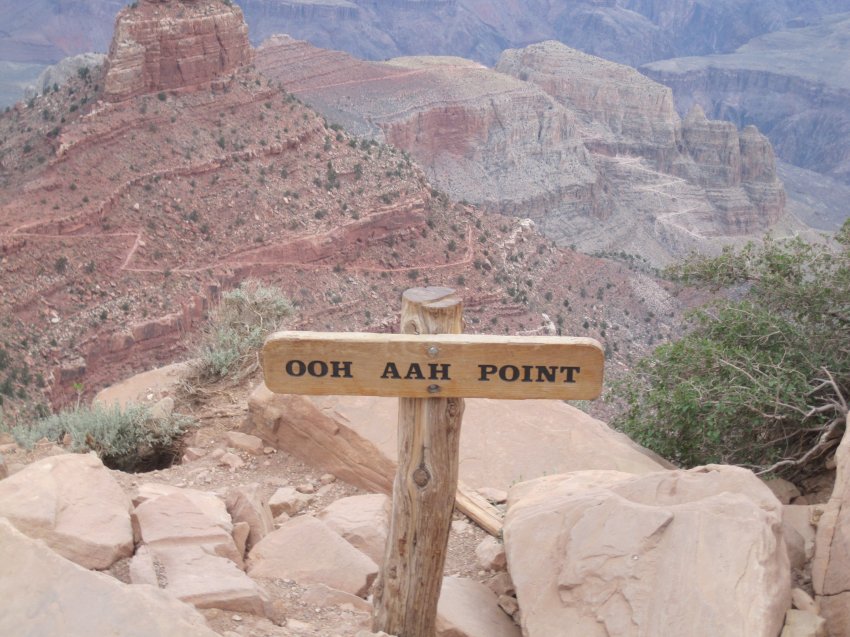 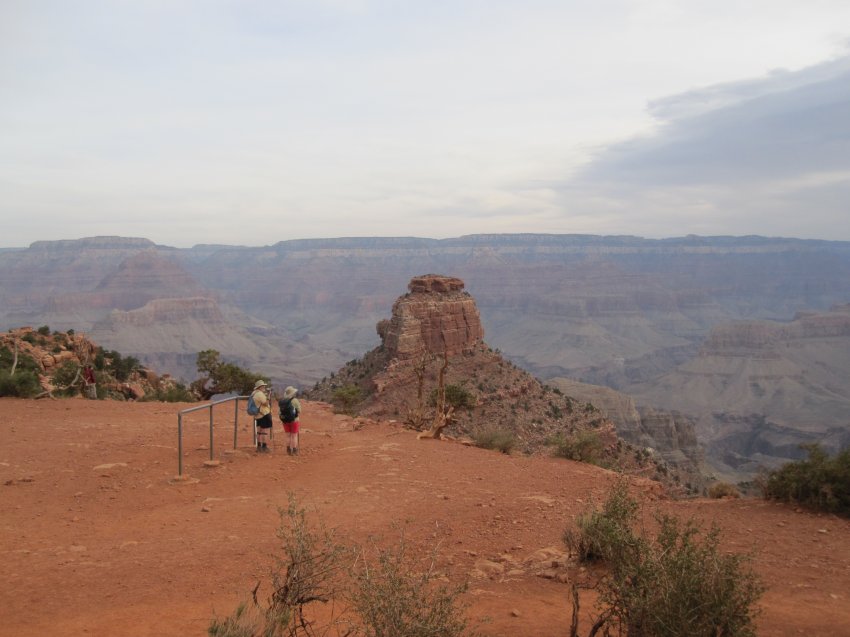 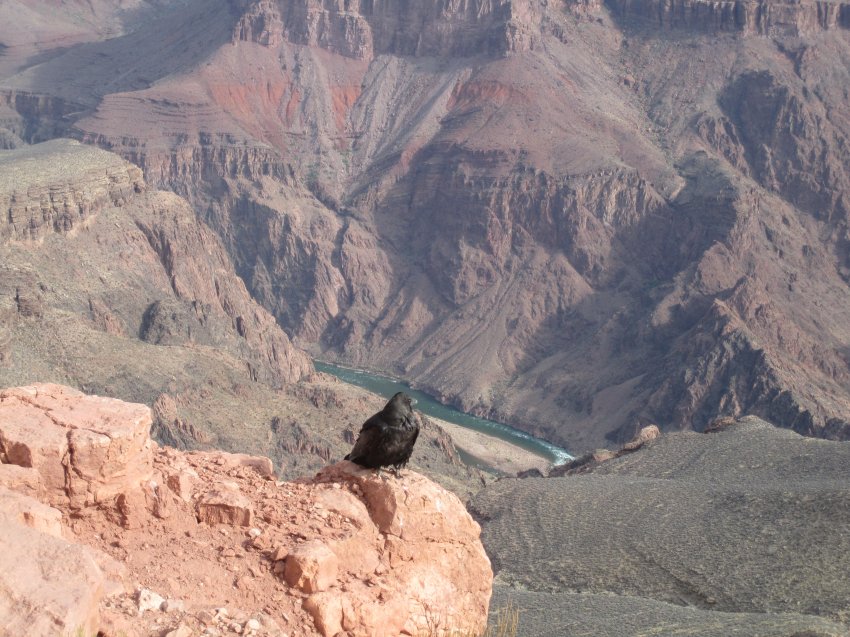 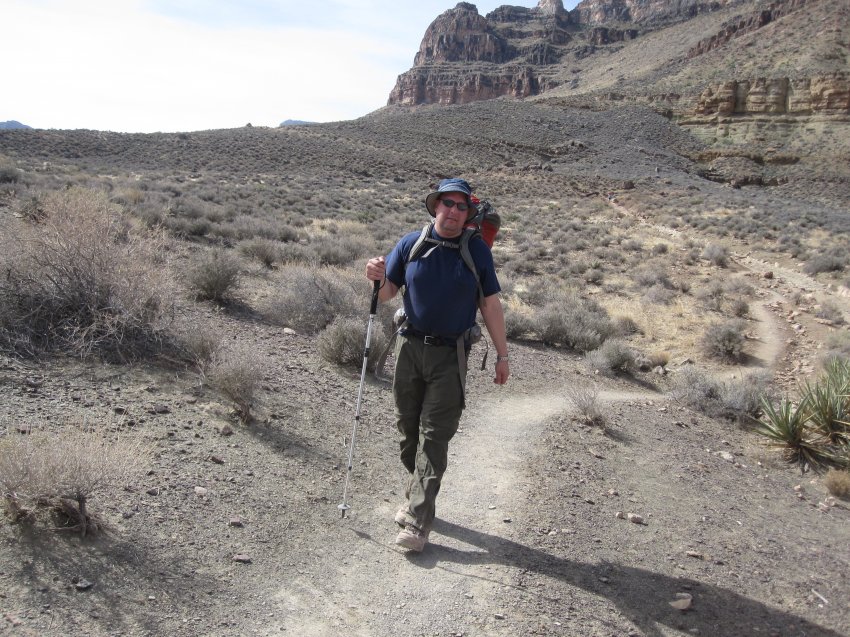 My son coming down the trail on the Tonto Plateau 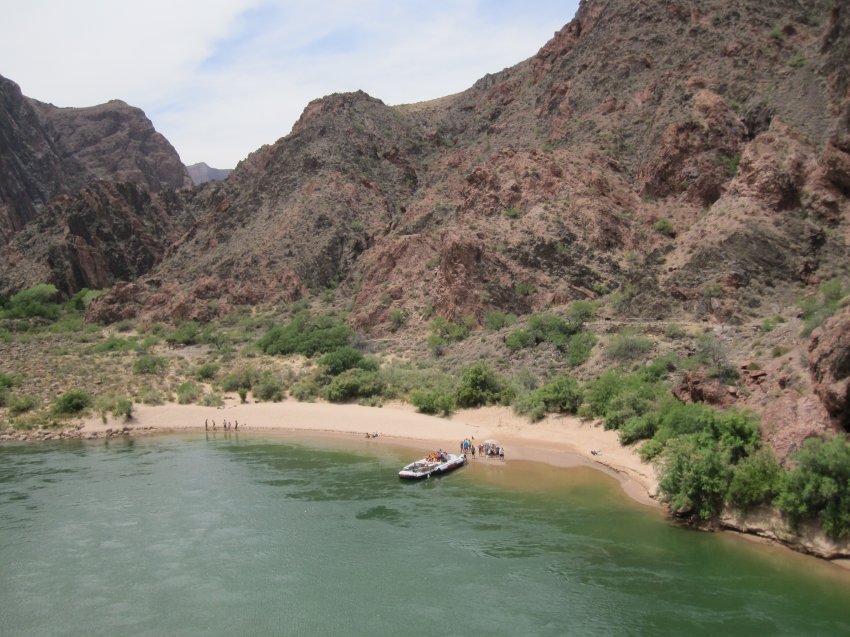 Rafters on the Colorado - note the river is clear - usually it is muddy and brown. 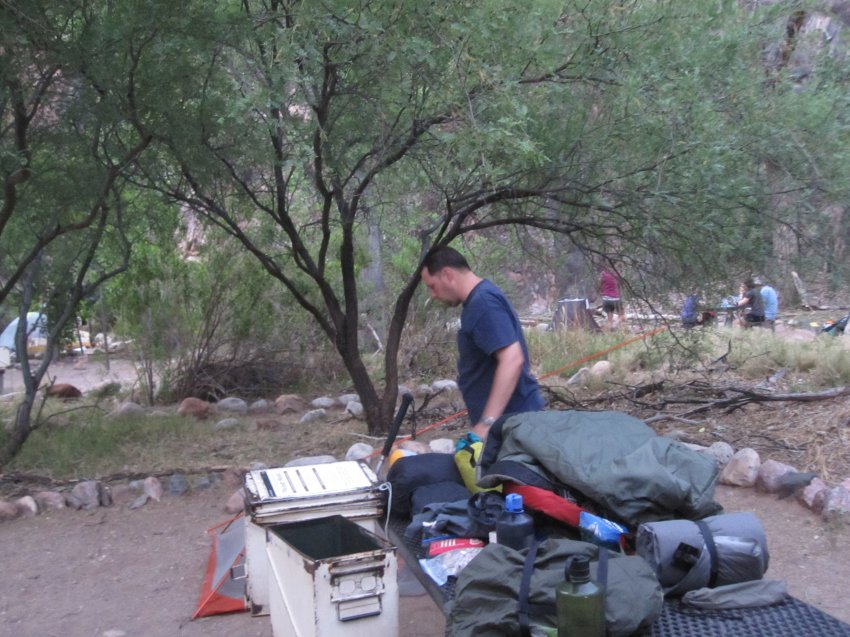 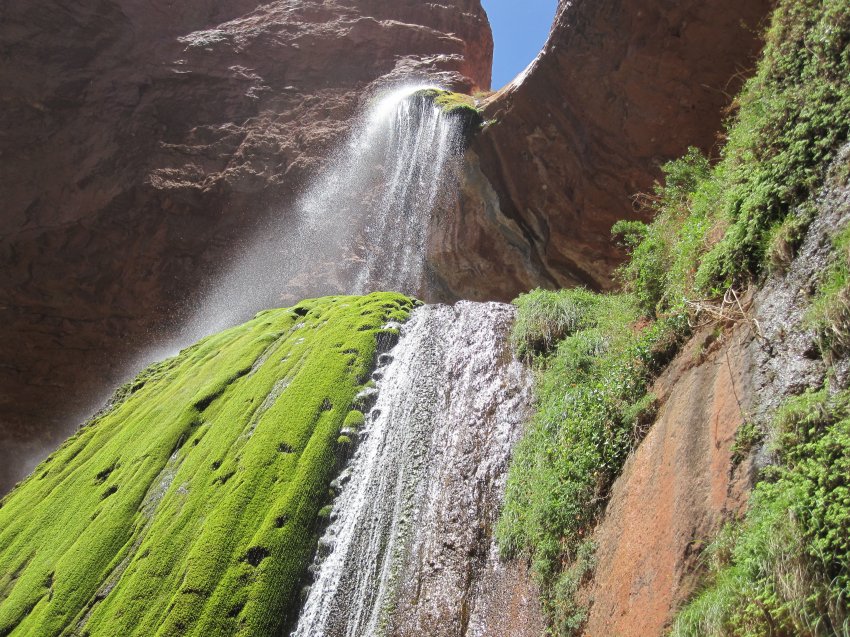 On day 2 heading up the North Rim up to Cottonwood - about 1 1/2 miles south of Cottonwood on the west side there is a neat waterfall about 1/2 mile off trail just after a big hump up a hill.

Night 2 was spent at Cottonwood. Nothing spectacular but all the sites have at least pit toilets so no catholes required. Now on day 3 the hike gets strenuous. We now have like 4600 ft up in 7 miles! The view get great so there is a payback. 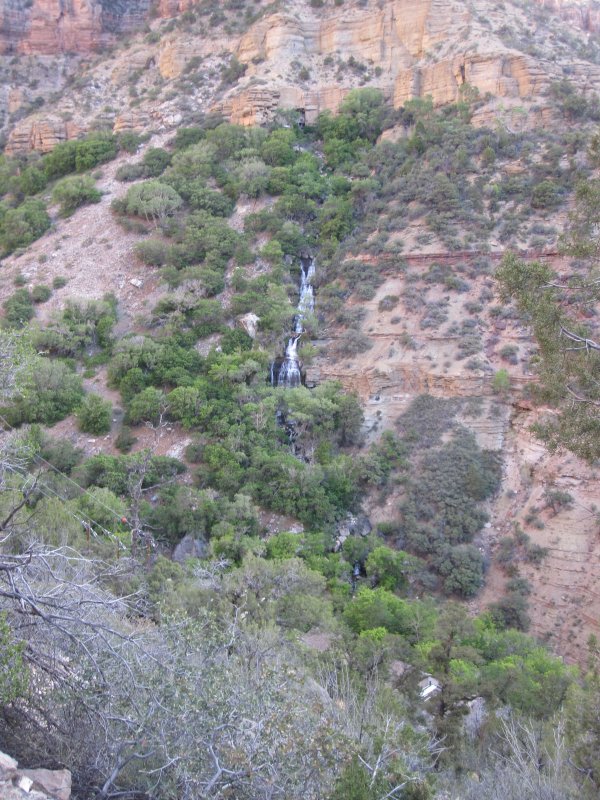 View across canyon to Roaring Springs. This is the water supply for both the south and north rims.


View down canyon from below the Supai tunnel. See the bridge in the middle of the picture. Problem is one has to descend a couple hundred feet and of course go right back up. 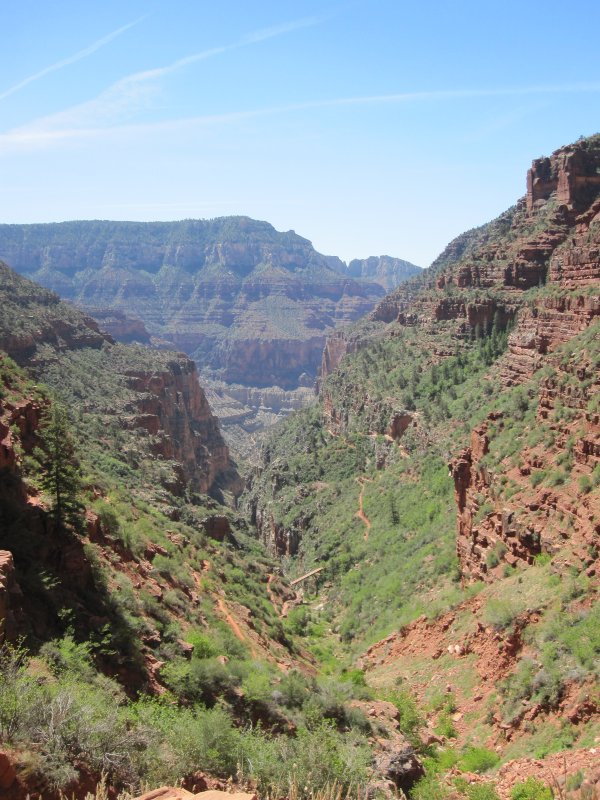 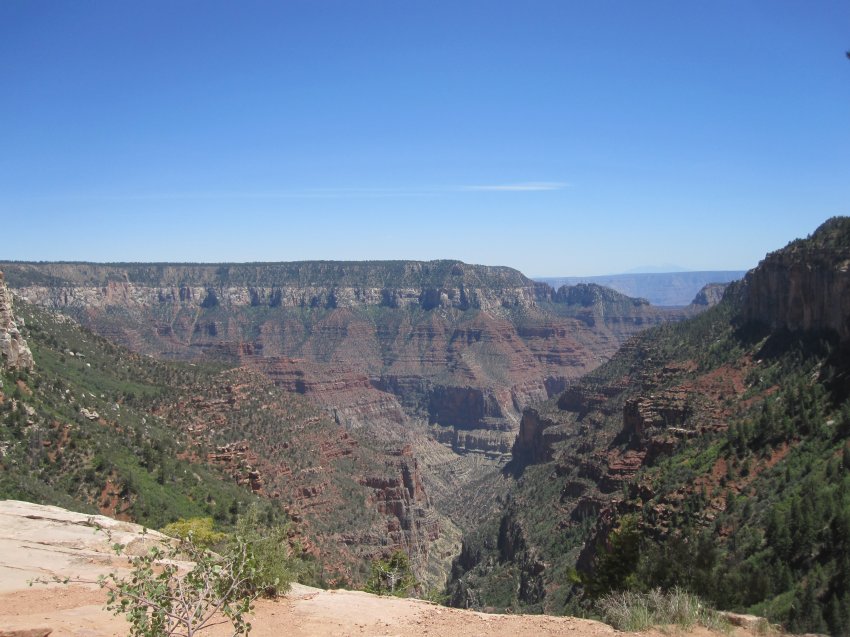 View from Coconino point - almost there!
But alas still a loong climb with a pack 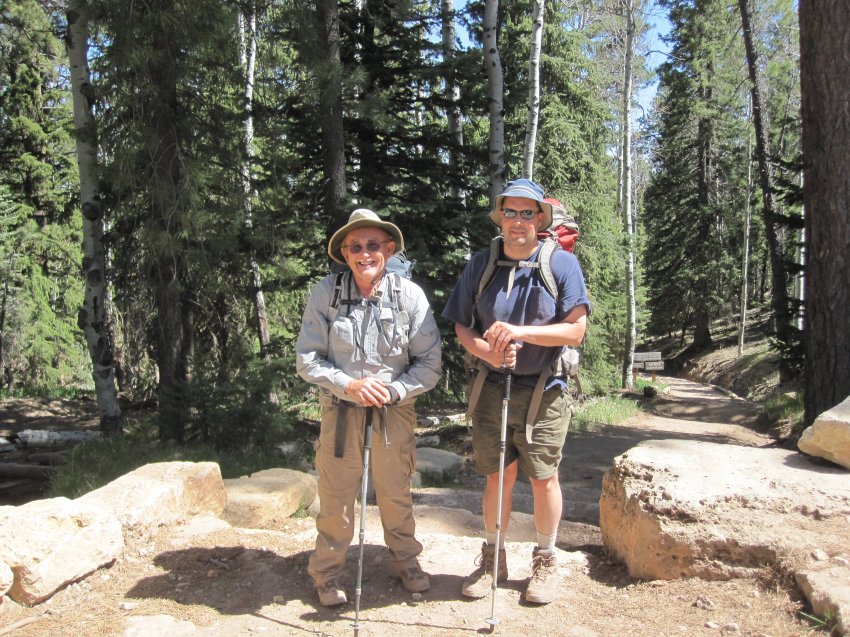 We made it!! (Look we are happy). Even got lucky and got a ride for the 1 mile to the campground. 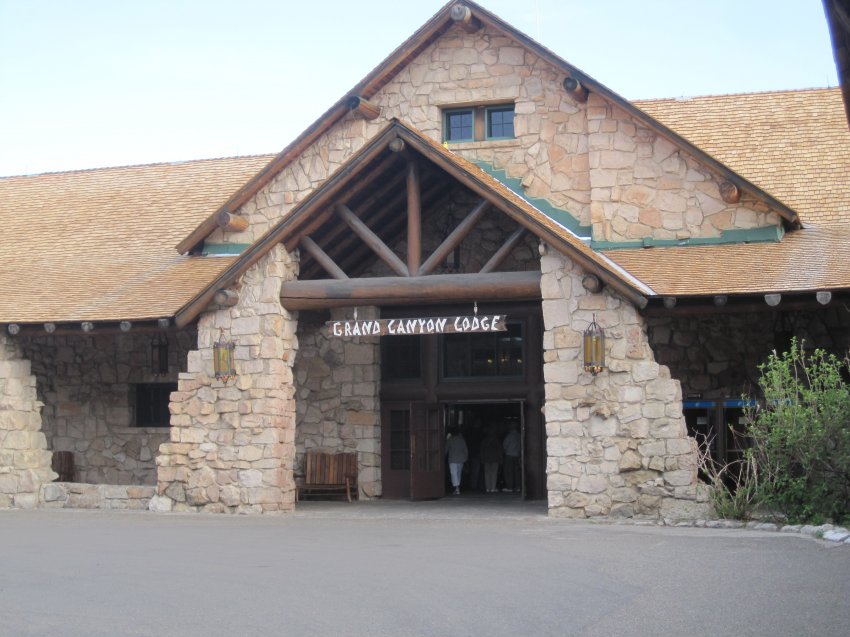 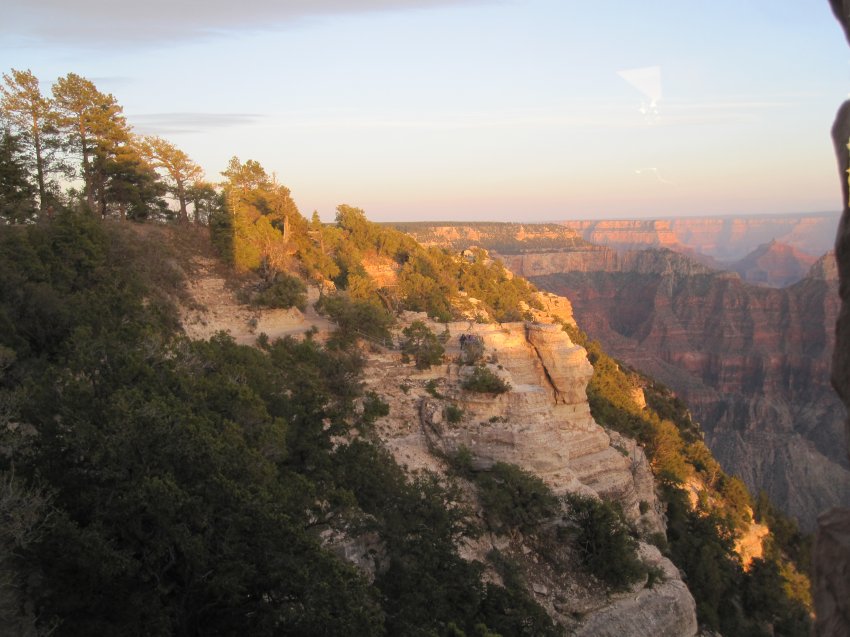 View from Lodge near sunset. It was cold (temps maybe in low 50 and WINDY!!
We camped at the North Rim campground and then took the Transcanyon shuttle (4 1/2 hr trip) the next morning back to the South Rim to get our car and back to Phoenix. We had a very informative driver - cost $85/person but only option.
Hope this post is informative. Most information can be found on the NPS GC website.
Note that permits are available on the first day of the 4th month before the hike and they are LIMITED. There are only like 11 sites at Cottonwood so that does limit overnighters.

what a great adventure with your son.

Awesome! And great pics too! Backcountry, front country... it's the outdoors that matters! Thanks for posting.
IG: @backcountrypost

Awesome trip and a wonderful experience! Thanks for the reservation info, if my nieces like the outdoor trip we're doing next month I may take them backpacking in the Grand Canyon next.

Laura said:
Awesome trip and a wonderful experience! Thanks for the reservation info, if my nieces like the outdoor trip we're doing next month I may take them backpacking in the Grand Canyon next.
Click to expand...

The window for the GC is small - June - August just too hot in the inner canyon. North rim closes 15-Oct and doesn't open until May 15 - pretty hard fast dates except in the fall they will let you in but NO services.
You must log in or register to reply here.
Similar threads