Well, I'm a little behind on my trip reports, so here's one from a trip I took to the Beartooths at the end of August 2012.

My wife and I had planned to take a three day weekend to hike a 14er in Colorado. However, Tracy was pretty shot from the weekend before at Spider Lake, and I had a long trip planned for the next weekend, so we decided to take it easier than the 14er. So we left Thursday after work and headed north. We spent the night in Rexburg, then got up Friday and headed through Yellowstone to the Beartooths.

We had lunch in Cooke City, and then we drove up over Lulu Pass. The wind was blowing pretty good up there, but Lulu Pass was really pretty, with views out over the Beartooths and the Absarokas. We drove a little down the road to Lake Abundance, but the 4x4 road was really rocky, so it was very slow going, and I didn't feel like spending half the day driving to the lake, so we turned around and continued on to Daisy Pass. The roads over the passes were in good shape; Lulu Pass was steep, but it wasn't anything too bad. From Daisy Pass we dropped back down to the highway and then continued on towards Red Lodge. 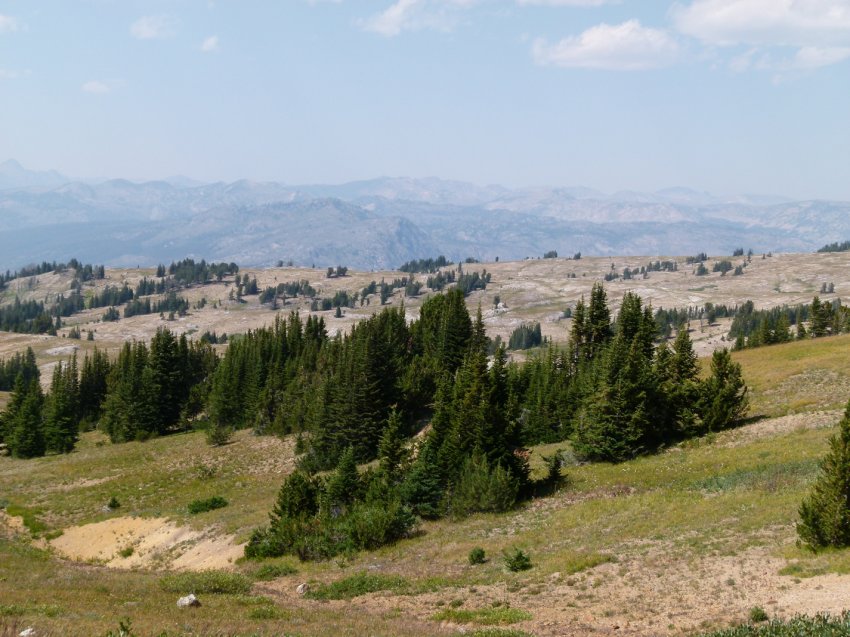 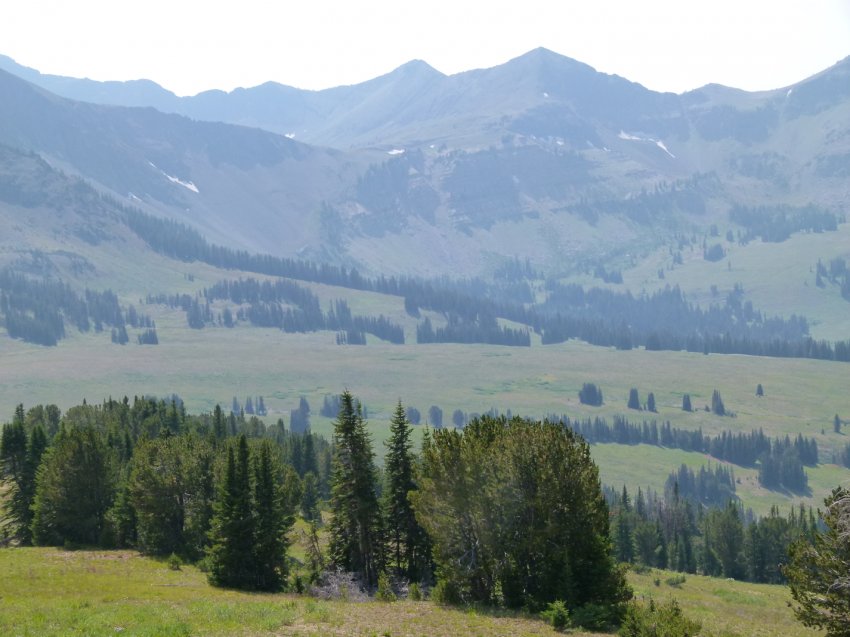 We hiked a little around Island Lake, and just generally enjoyed how beautiful the Beartooths are. 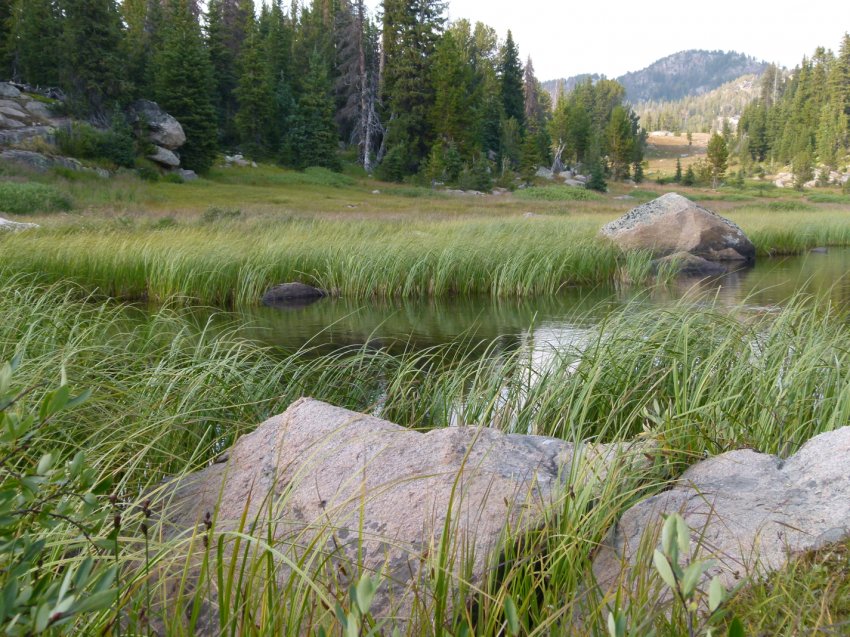 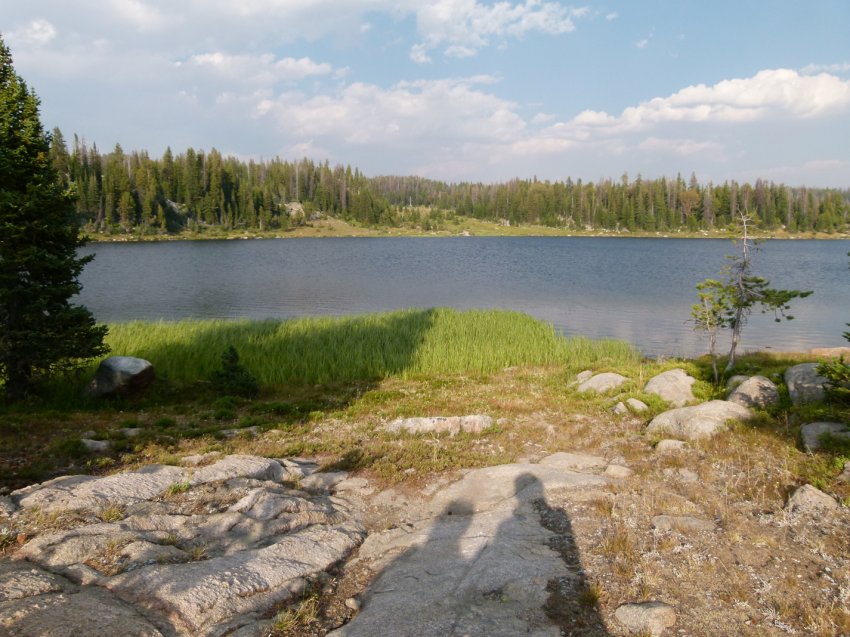 We ended up in Red Lodge for Friday night.

On Saturday we got up and headed back to the Beartooths. We saw some mountain goats on the way up, which was cool. 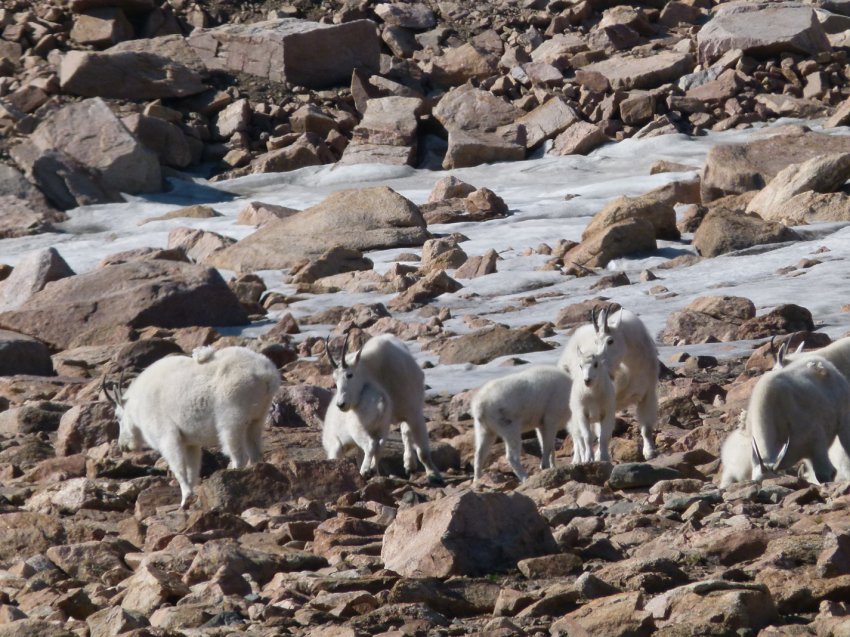 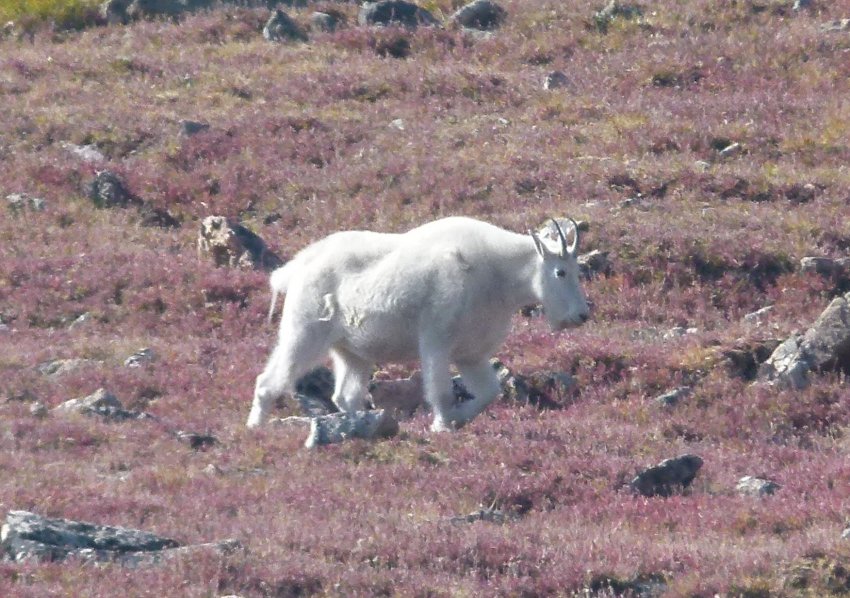 We then did some hiking from Long Lake up to Sheepherder Lake. This was a really nice hike, mostly cross-country, with lots of lakes on the Beartooth Plateau. Tracy and I didn't want to leave this hike...it was really that nice. 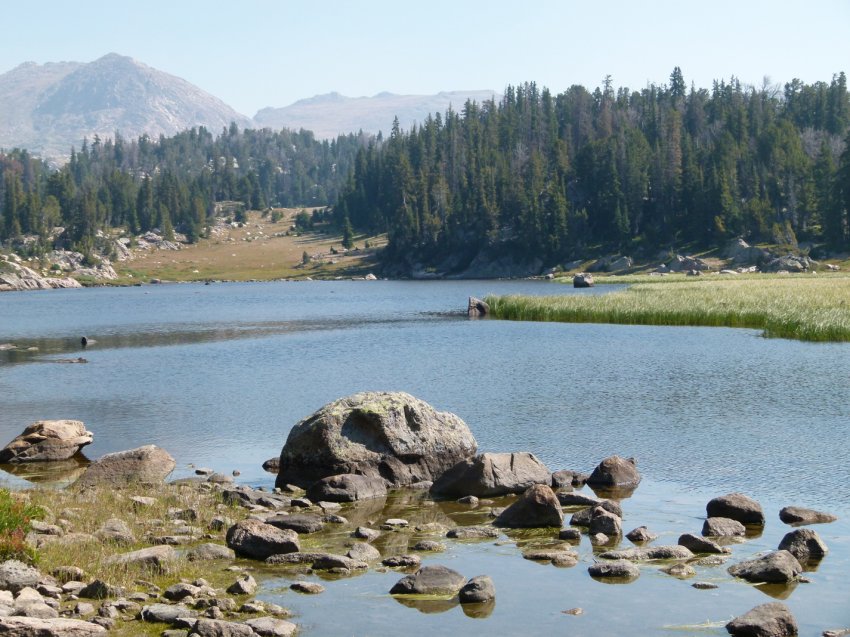 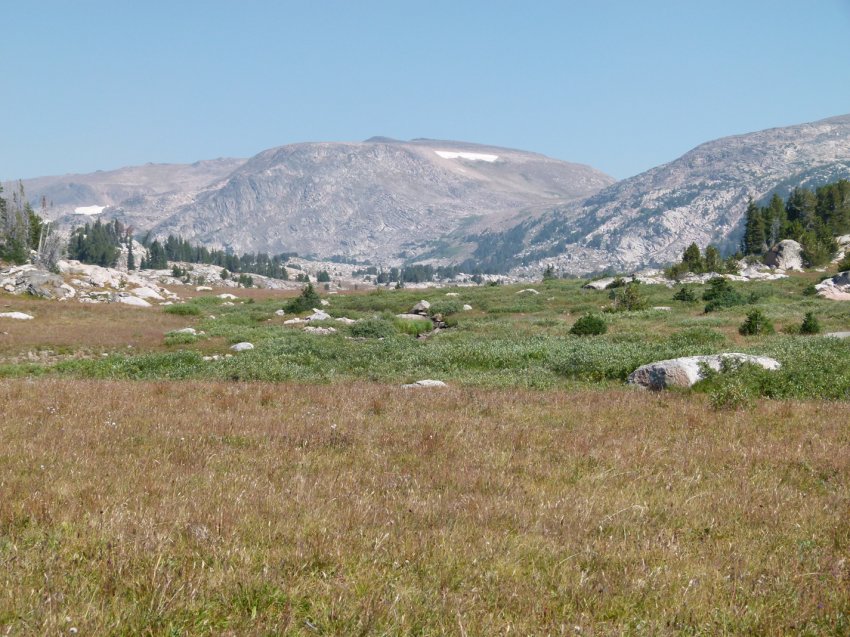 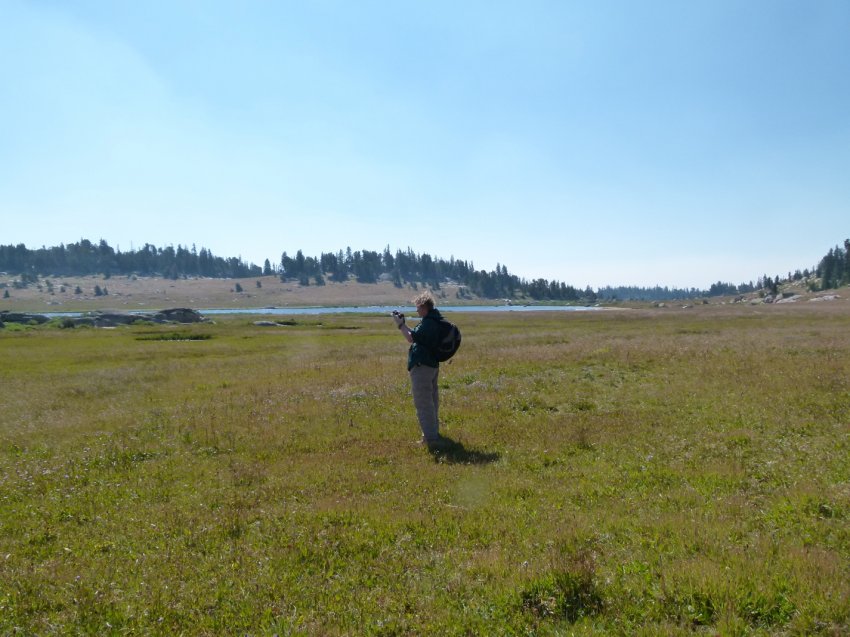 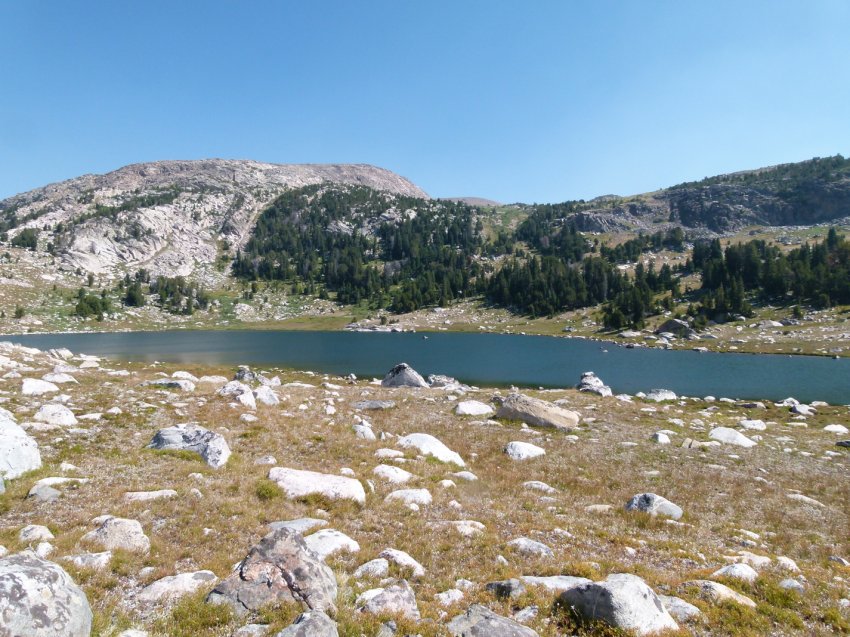 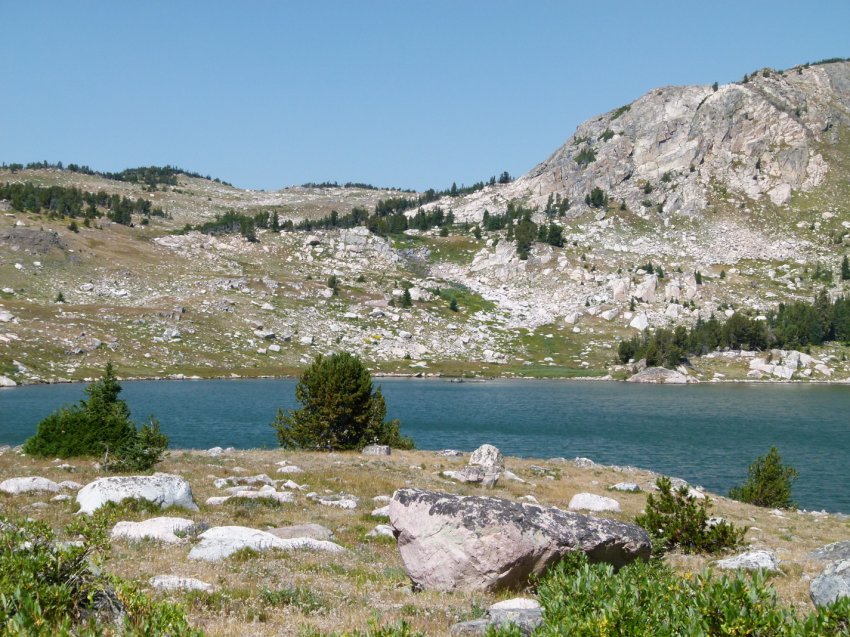 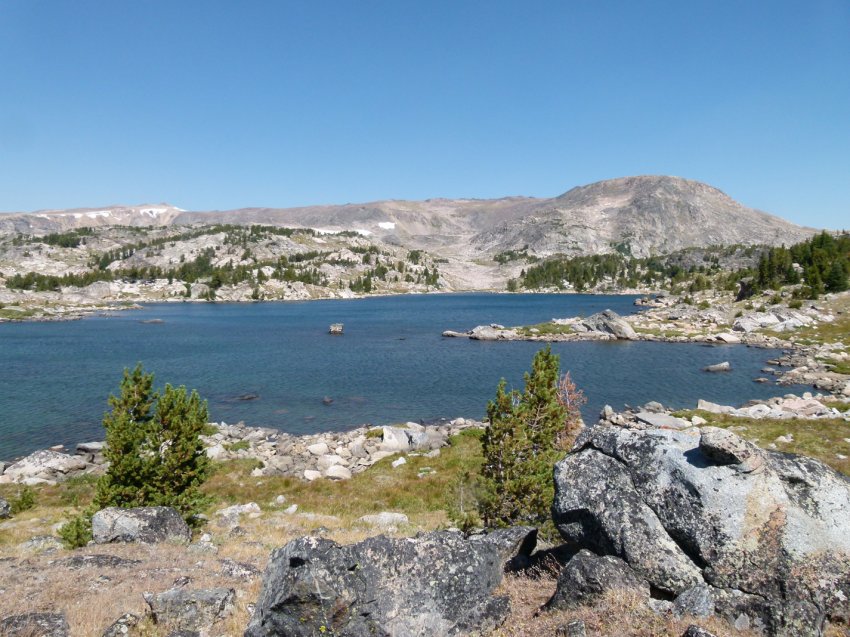 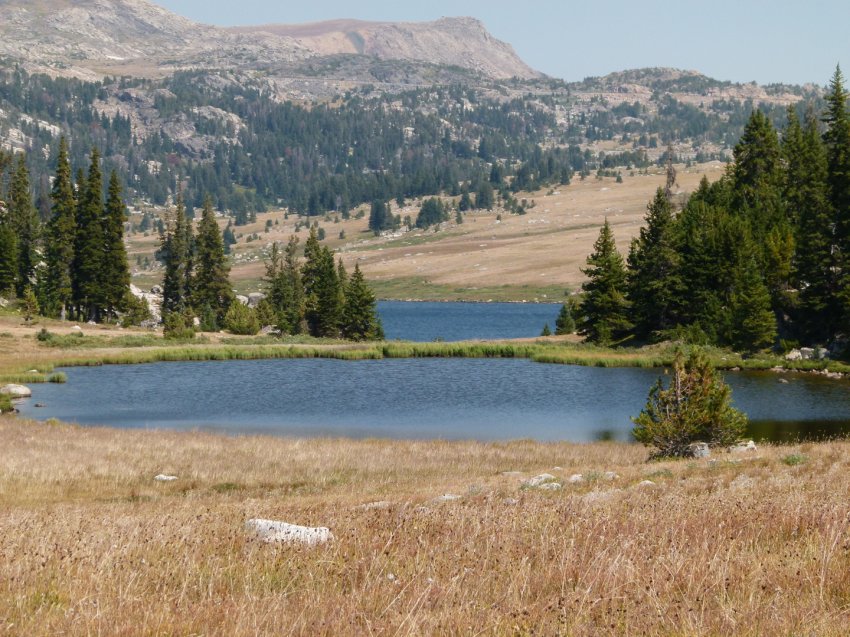 We then hiked a little at the trail near the Clay Butte Lookout, to see the great views on the trail over the Beartooths. I then hiked a little bit on the Muddy Creek Trail. Next we started down towards Cody, and I hiked a little on the North Crandall Trail, which looked like a nice trail to take into Yellowstone. From there we headed into Cody for the night, and walked around town for a couple of hours. This is where we walked like 5 miles around town, and I ended up bruising my toes on my "easy" weekend before my long trip the next weekend...

On Sunday we got up and headed back into Yellowstone via the east entrance. Once again, we didn't see much of anything in Hayden Valley while driving through. I know Hayden is supposed to have a lot of wildlife, but we never see much more than bison there. We've had much more success in the Lamar Valley. I do want to do some hiking in Pelican Valley, though...that looks like a nice trail. The rest of the day was just the long drive back home.

This trip reminded me how much I love the Beartooths...I still think I might like them more than the Winds. I want to spend more time up there...it's just such a long drive. But it's worth it.

Beautiful! I love how open it is up there. The goats are great too. I really, really need to get up there next year!
IG: @backcountrypost

Great report it looks like a beautiful place. I've never been to the Beartooths. Sidenote about Pelican Valley If you weren't already aware they do have time limits on when you can enter 9 a.m and when you must be out of there 7 p.m. This is because of the high bear population in the area. The area is closed until July 4th.
Those who suffer huge personal blows can either give up or learn and prosper from said blows.
-Donnie-

Yeah, Yellowstone 1, that's why I want to go there so badly! Every time I've remembered to go it's been during one of the closure times. It wasn't closed this time when we went through, but we didn't have time to hike.

I did a trip a couple of years ago in the Absarokas outside the east side of Yellowstone...I felt like I was walking into a warzone...every person I saw, even those just getting out of their cars for a few minutes, was carrying a large firearm for grizzly protection. That's why I loved backpacking in that...it's scary in an invigorating way!

I hear ya Aldaron! It would be nice to have enough time to hike to the top of Pelican Cone and out before 7pm or to White lake and back. Prime habitat is not only invigorating, but it adds a little pucker factor. Kinda like hiking through a stand of thick new pines with no idea what's around the next corner.
Those who suffer huge personal blows can either give up or learn and prosper from said blows.
-Donnie-

I haven't, Keith. I was really tempted to head out there while I was in Yellowstone but I was hungry and didn't know what if any services were outside the park that direction. I'm due to check it out, but I think it'll have to be for some backpacking. I'm not sure what to be more afraid of though... the bears or all the people carrying big guns that are paranoid of bears!
IG: @backcountrypost

It's not bad like that in the Beartooths. I don't think the Beartooths are good bear territory because they're so much above tree-line. I have seen grizzly tracks near the road up there, but I wouldn't really worry about them very much in the backcountry. The Absarokas all around the Beartooths are another story...
You must log in or register to reply here.
Similar threads