I hiked this peak a couple weeks ago on June 4th. While it wasn't an incredibly long hike, this peak is seldom climbed and I have yet to find anything about it on the internet other than a few articles mentioning its existence. I'm hoping that this will shed a little light on what it's like to summit this nice peak.

I can think of at least 2 feasible routes to the summit--one starting from the mouth of Providence Canyon, the other would be to hike up Leatham Hollow, which begins in the Left-Hand fork of Blacksmith Fork Canyon, then bushwhack to the summit. I live closer to Providence Canyon and have had that route mapped out in my head for quite some time, so I began there.

Essentially, it's just a walk up a ridge the whole way, so it's easy to stay on track. I was surprised to find a decent trail as I began my ascent. 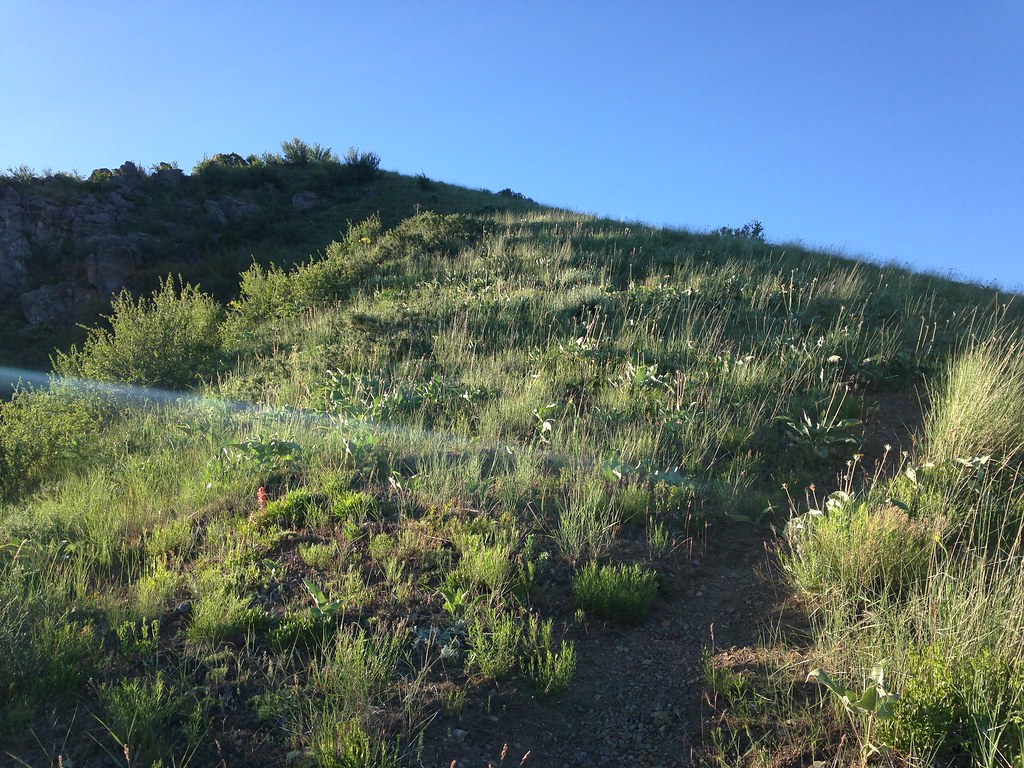 Here's a view of the peak from a little ways up. 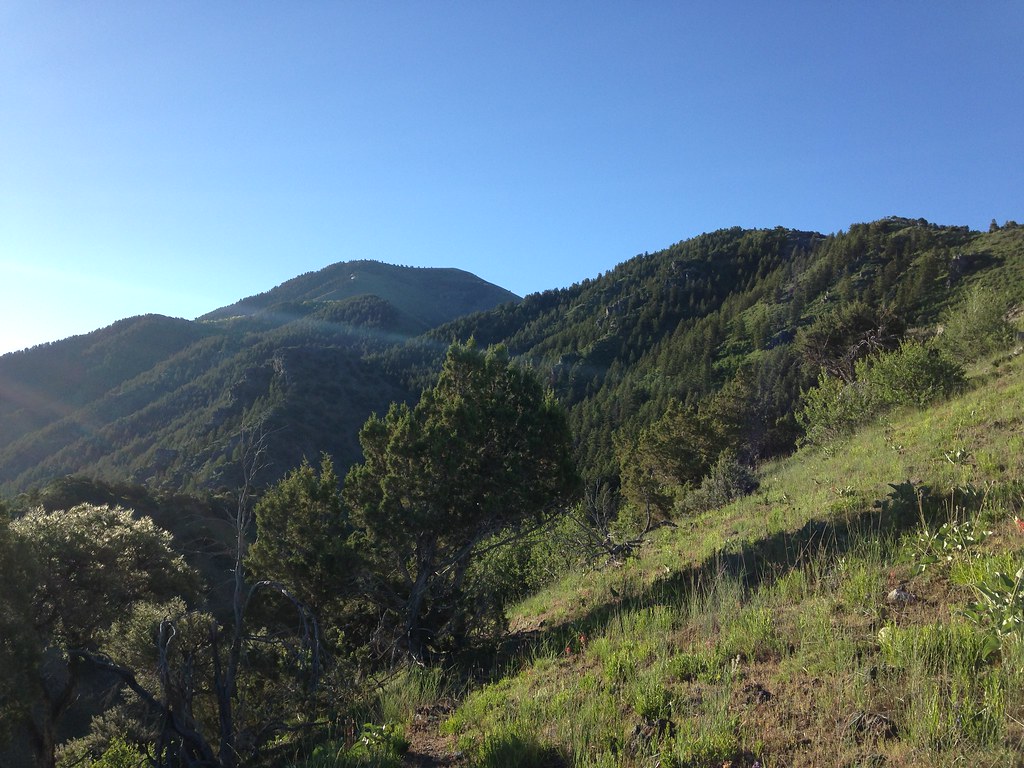 The trail continues with no switchbacks strait up the ridge, looking like this for most of the way. It's a steep climb up, but I didn't think it was too terrible. Coming down was pretty terrible, though. 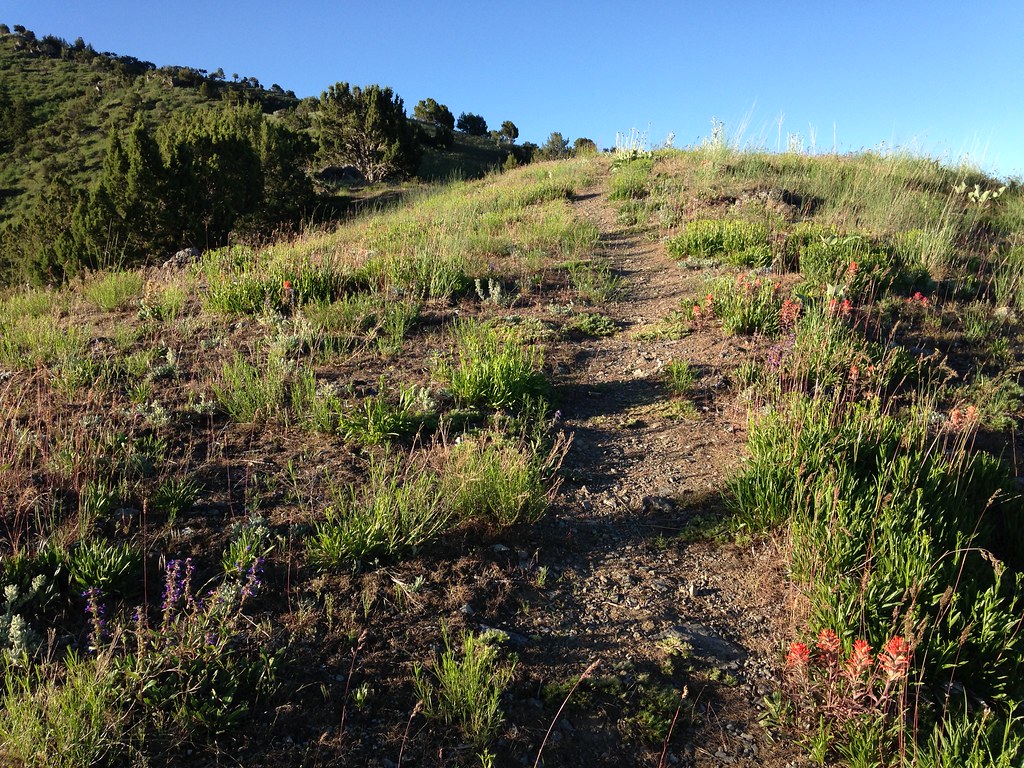 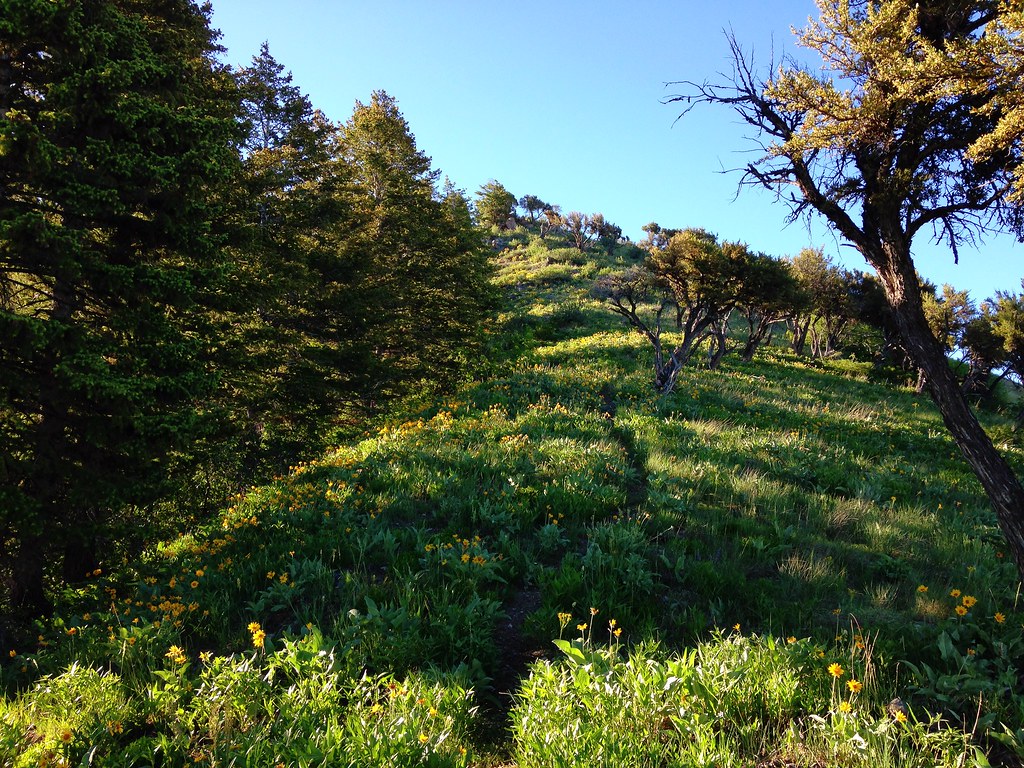 I thought it was neat as shown in the previous photo to be between two different types of forest.

Lots of nice views of the valley on this hike. That's Gunsight Peak in the top left. 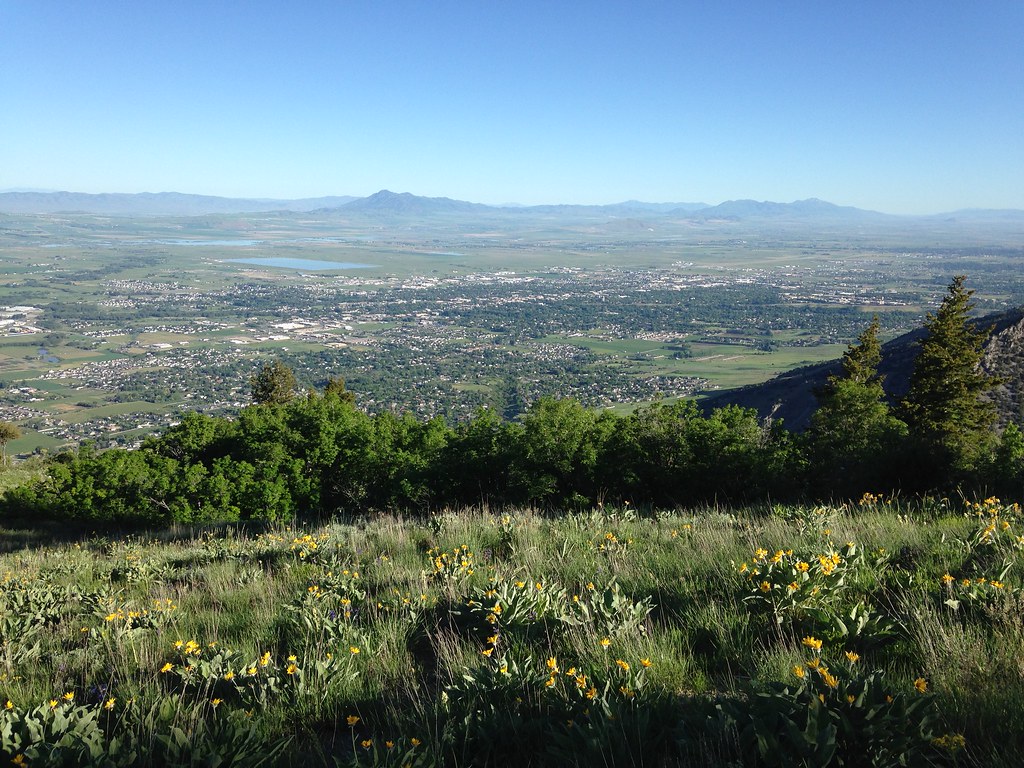 Wildflowers make hiking this time of year awesome, even on a dry mountain face like this. 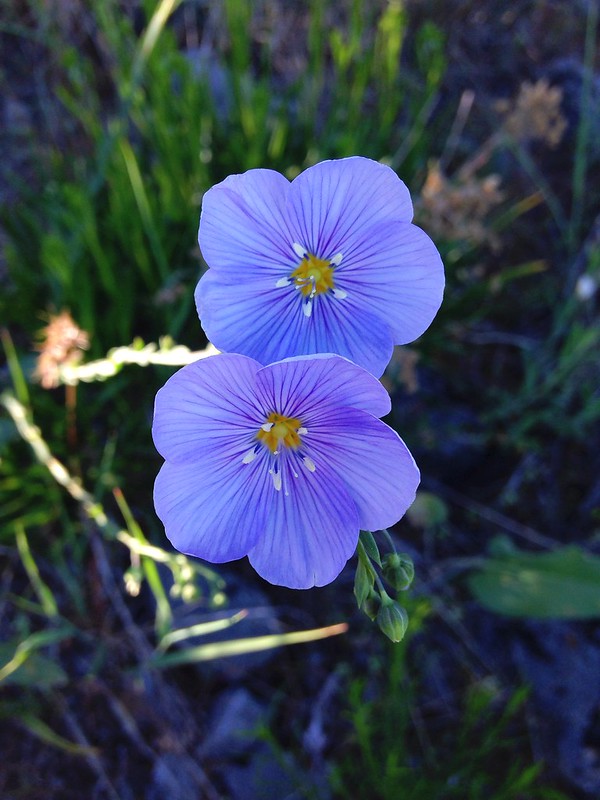 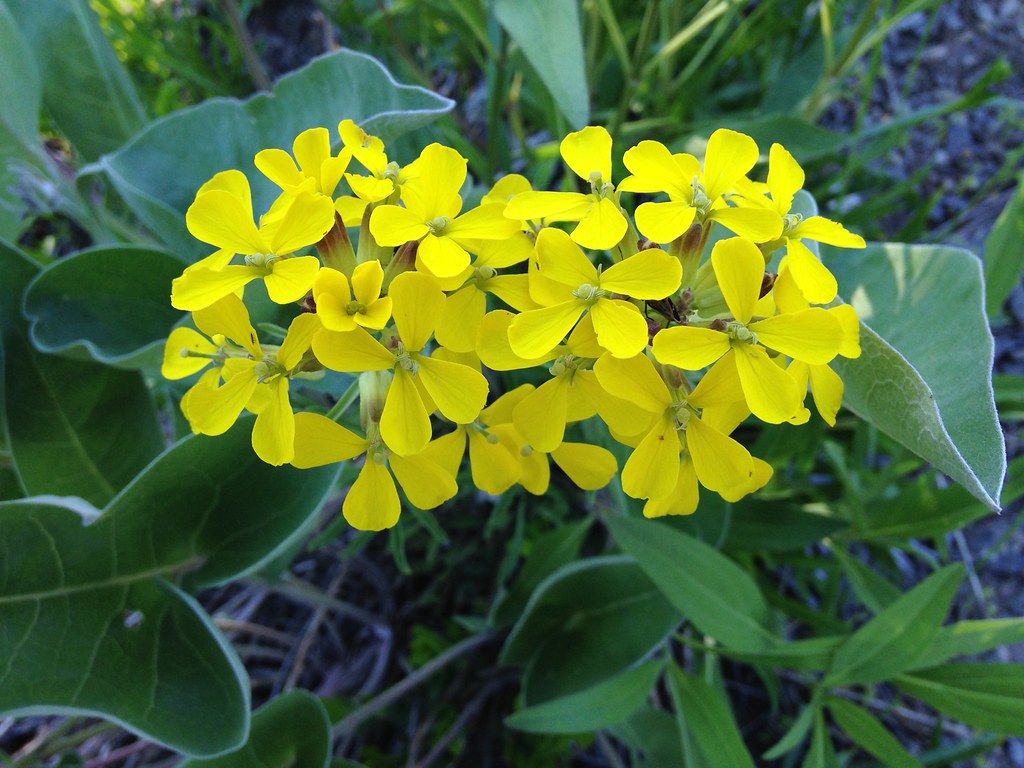 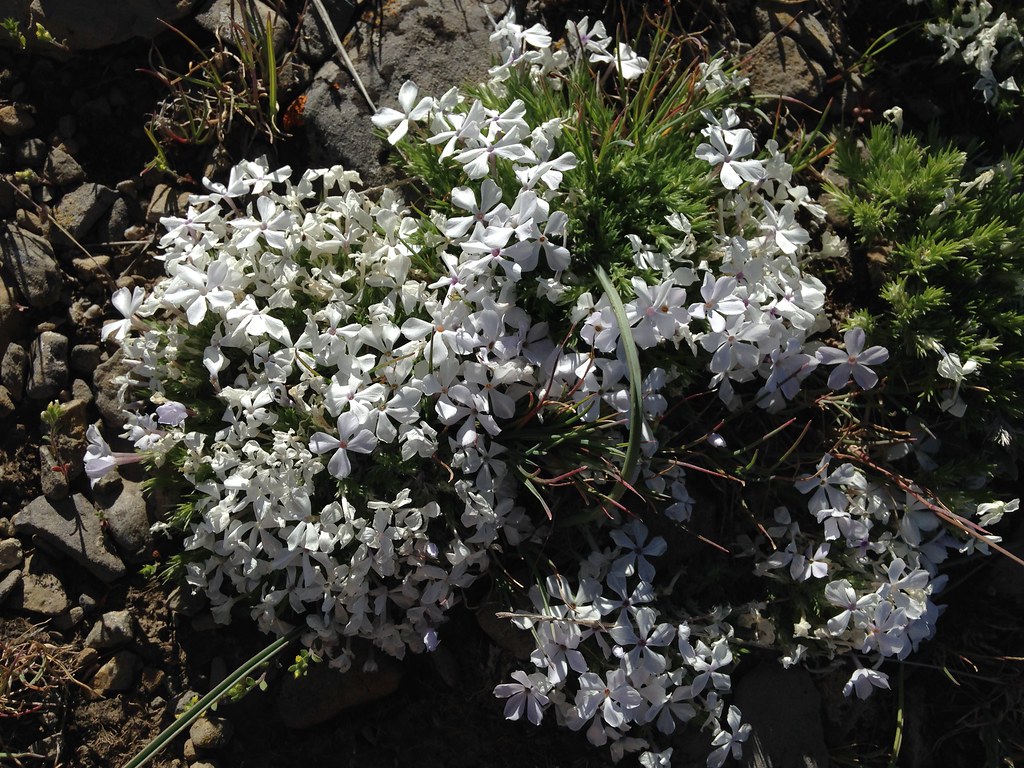 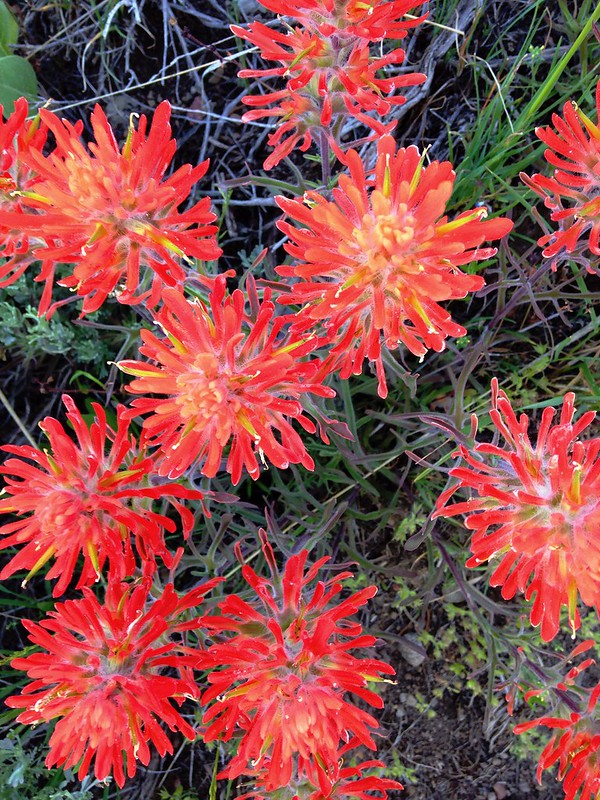 This is Millville Canyon looking very green. I could hear the occasional Jeep driving its rough road. 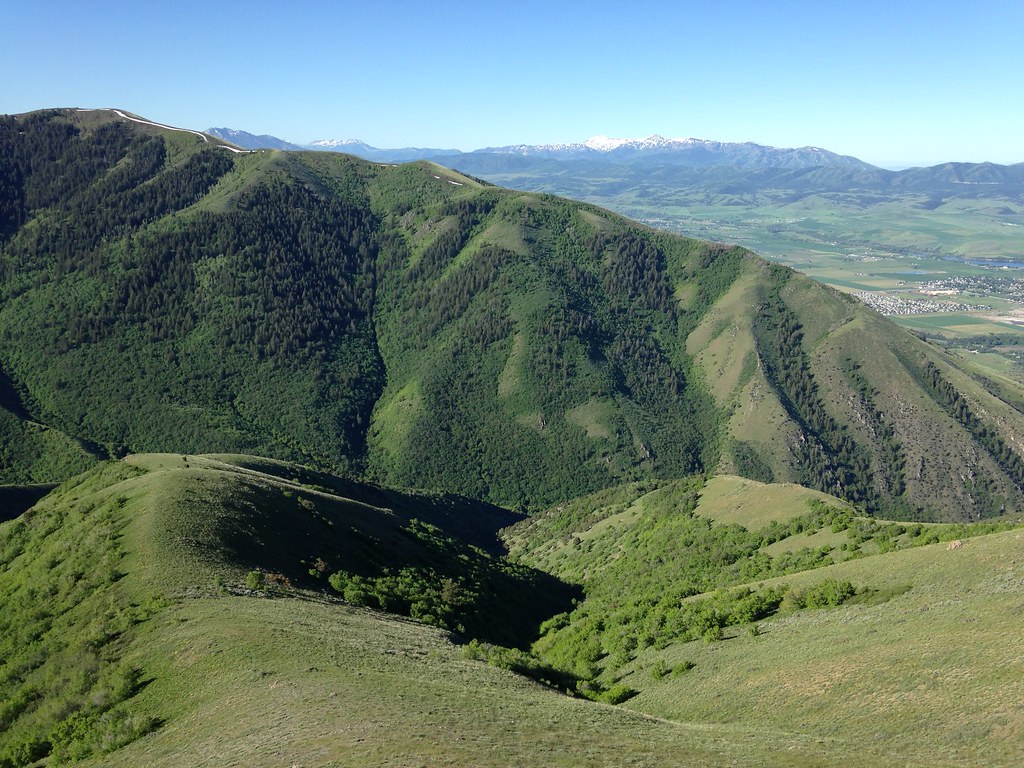 Look to the north and there's Logan Peak's south face. 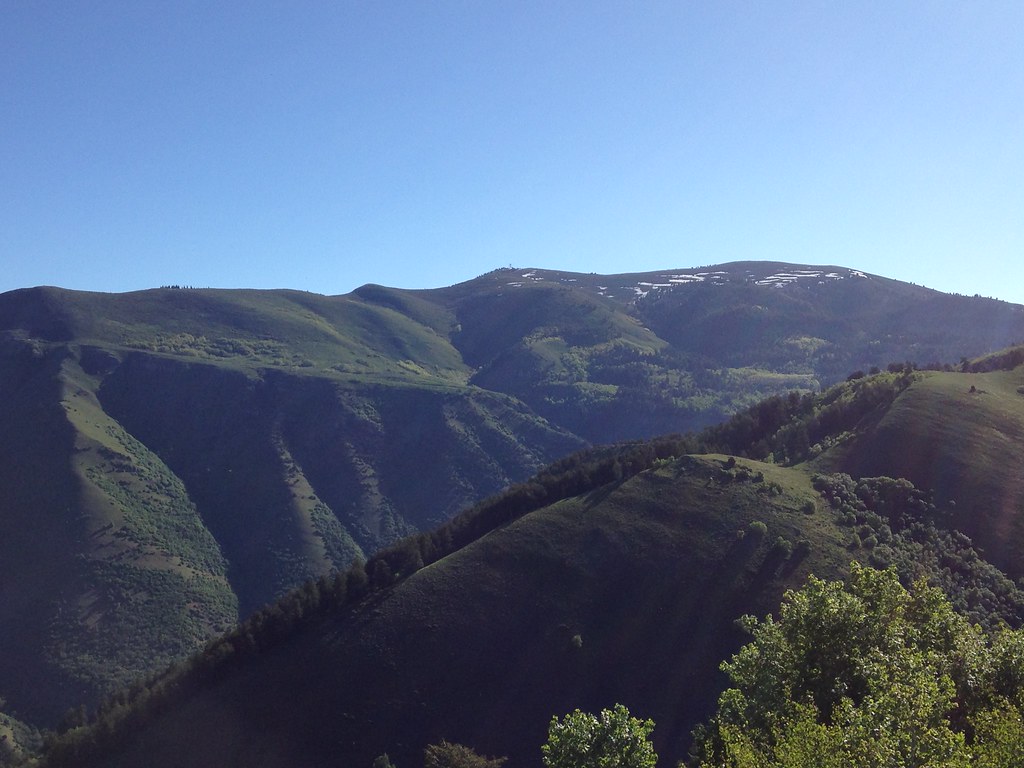 I came across this campsite a ways up. Thanks to decent tree cover, one could probably have a pretty good night's sleep here, despite being on a ridge. 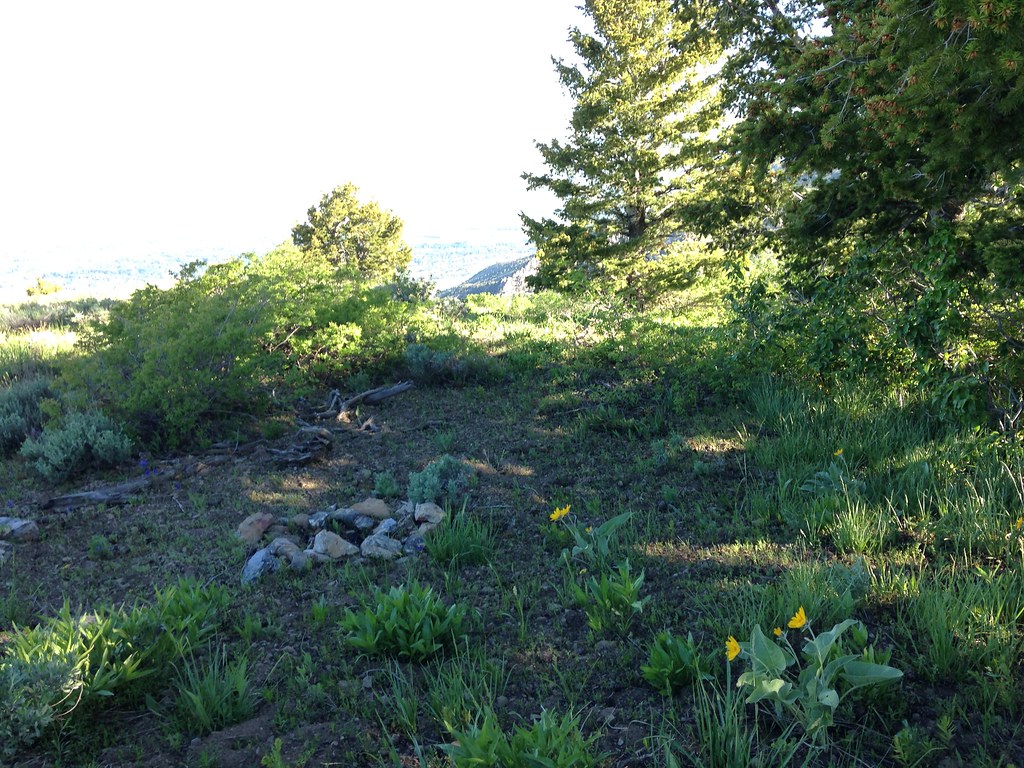 The trail eventually grows fainter as you gain elevation. You can see it in the top right. 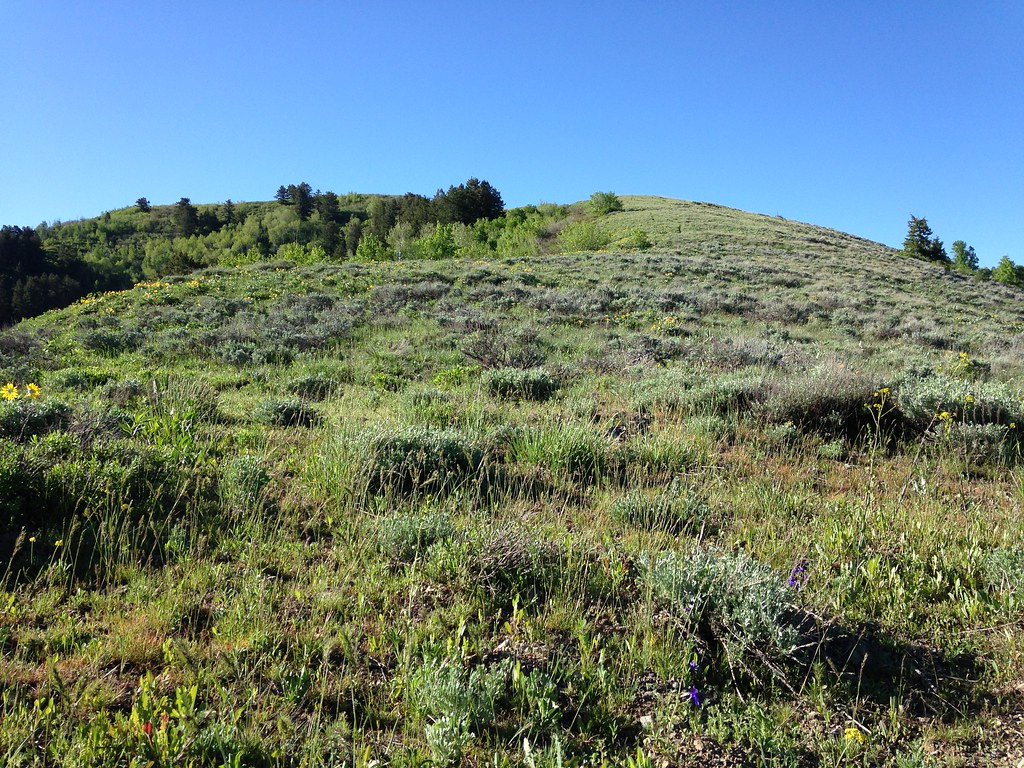 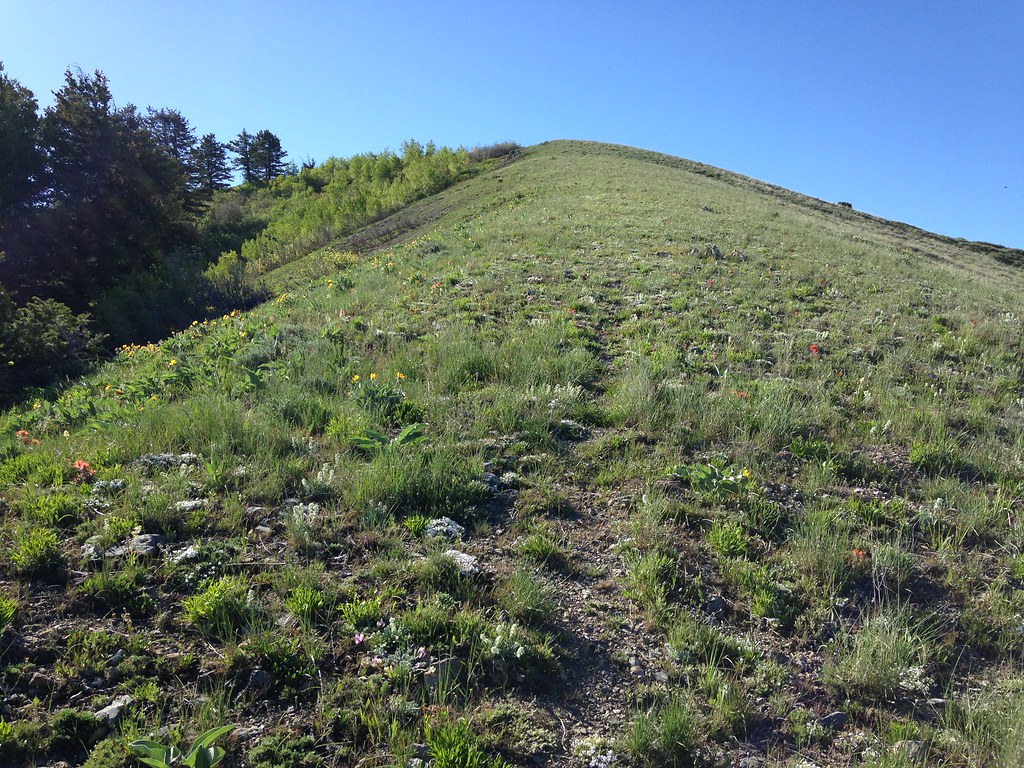 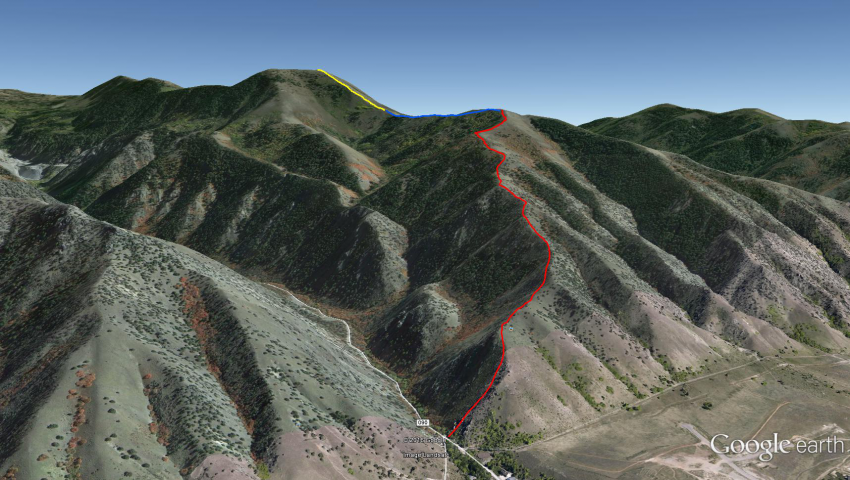 Here's the view from the beginning of the second section with the peak in the distance. 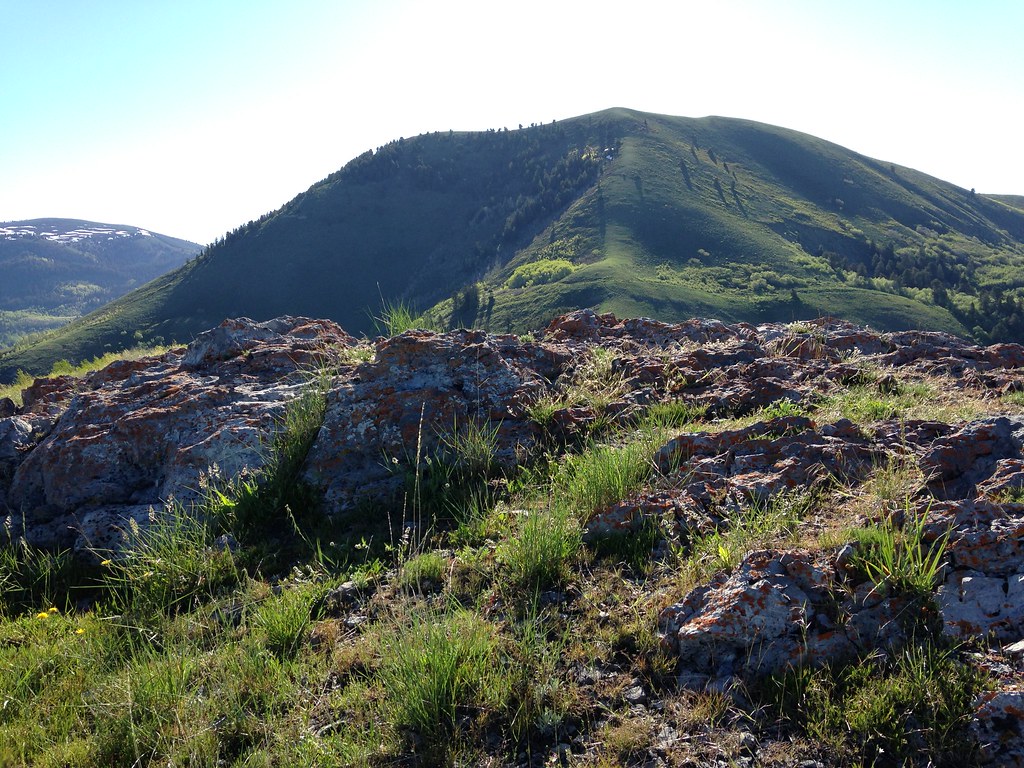 The rocks in that photo mask what the shelf looks like, so here's a shot from the other end of it just before you make the final climb. 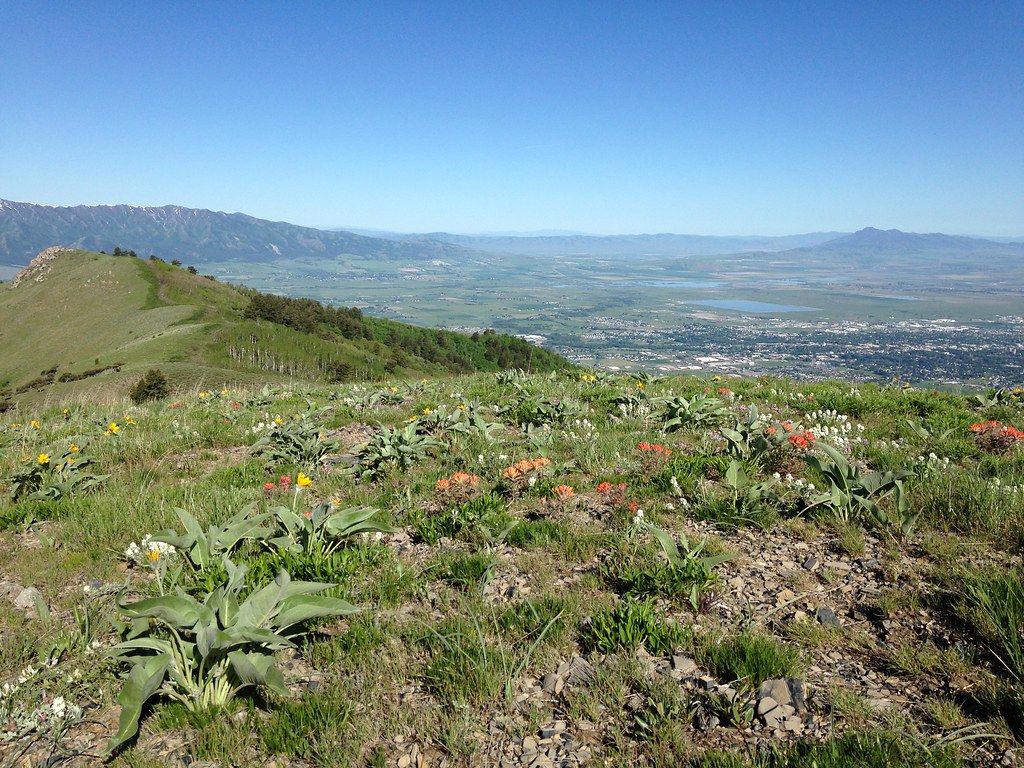 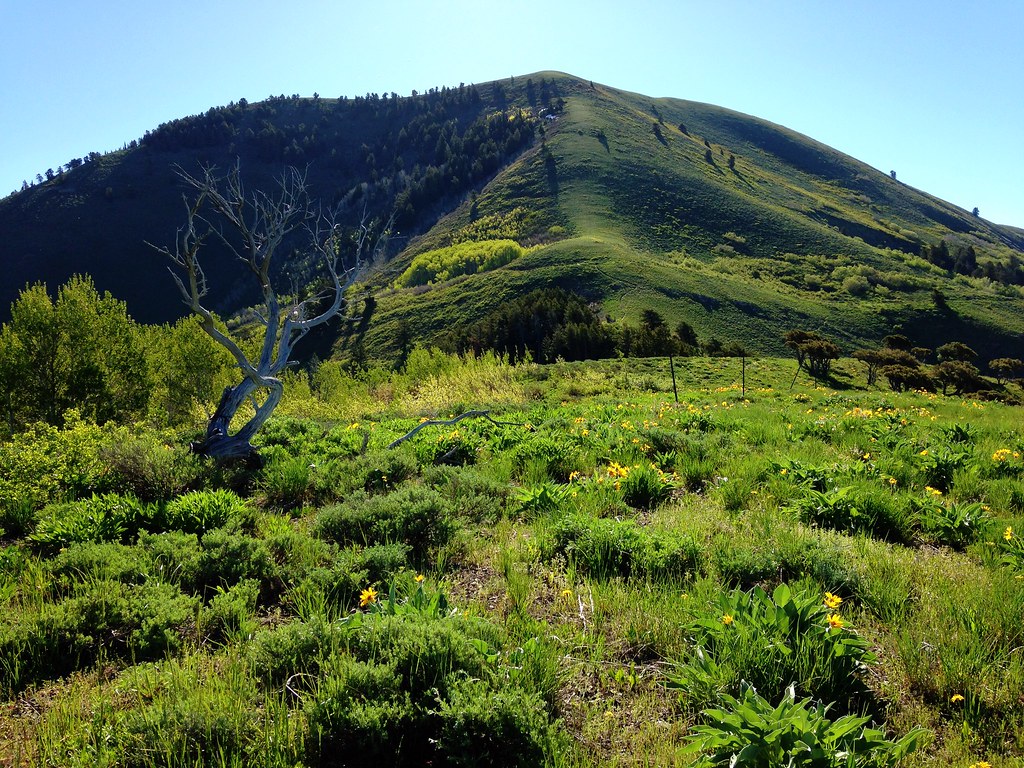 The final climb. Note all the wildflowers! 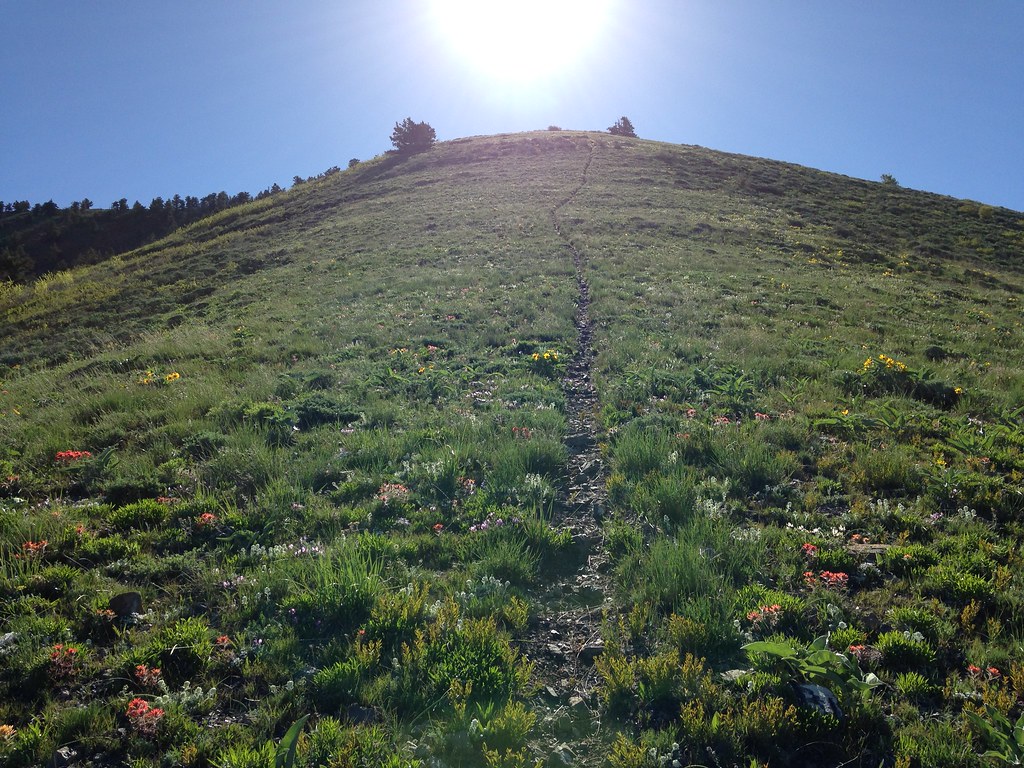 The last stretch was the most energy taxing--very steep and I found the trail to be troublesome with loose rocks. I mostly zigzagged my own path.

The summit! Note the still-snowy peaks north of Logan Canyon in this next photo. 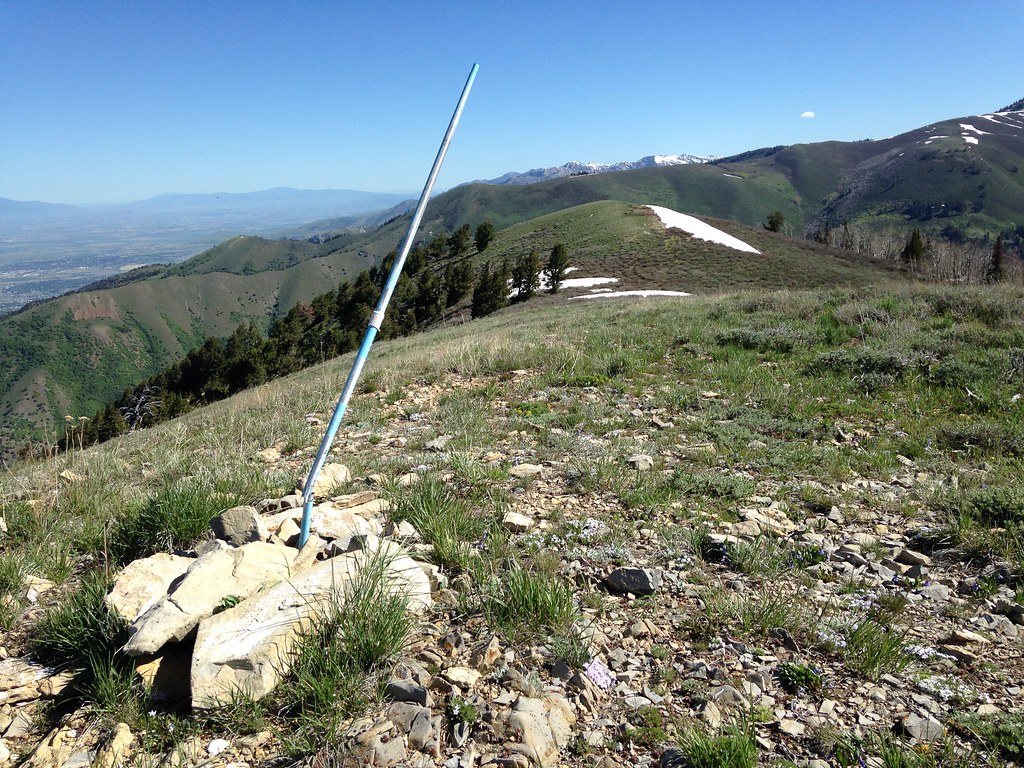 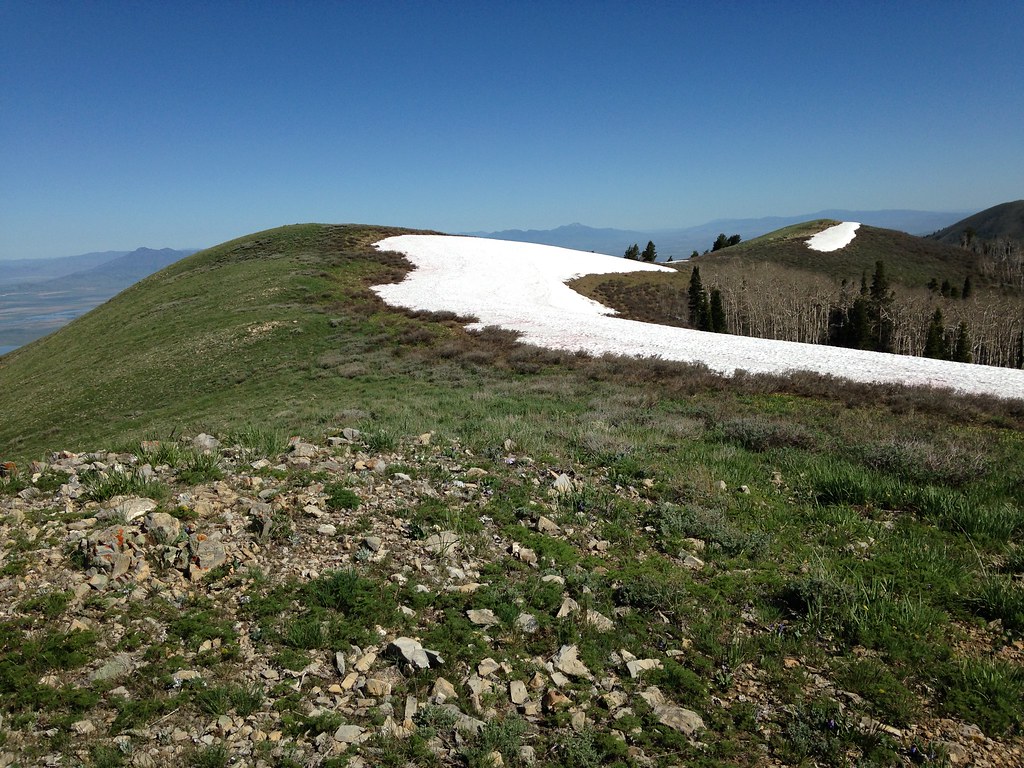 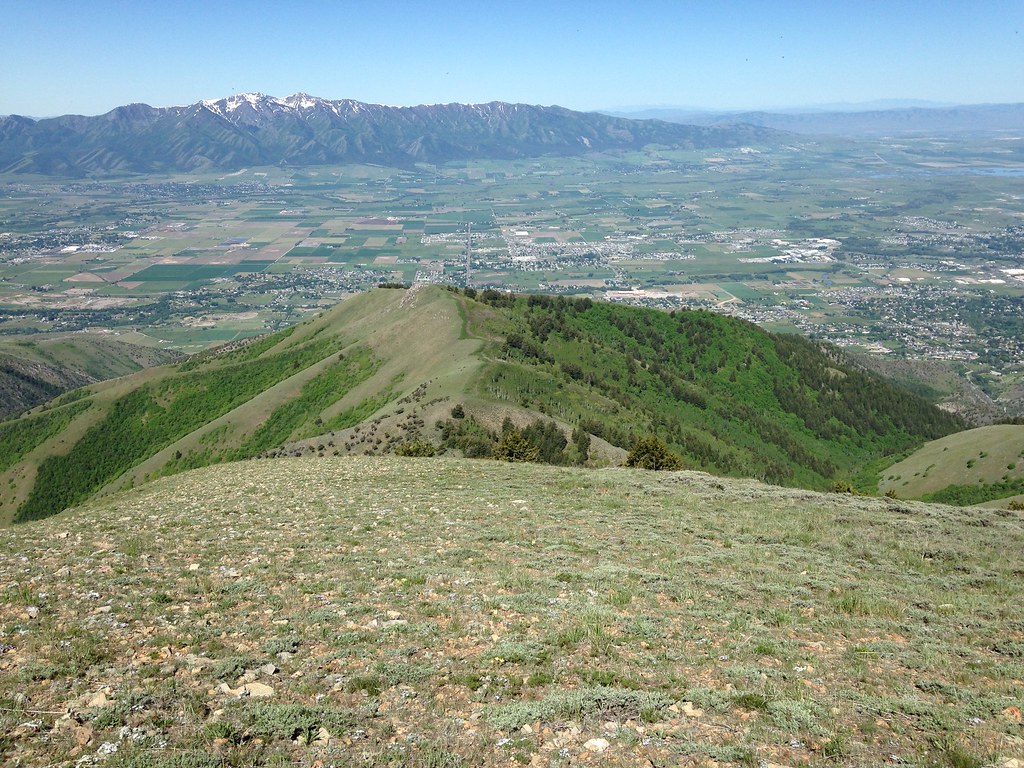 I regret not taking any photos of the view to the east from the summit. I could see Millville Peak quite nicely and saw that hiking there from BB wouldn't be much of an issue. There was still decent snow cover in the saddle between the two peaks when I was there.

On the way down I came across this fellow who cooperated with a few photos before slithering away. Rubber Boa I believe, but someone on here may know better than I do. 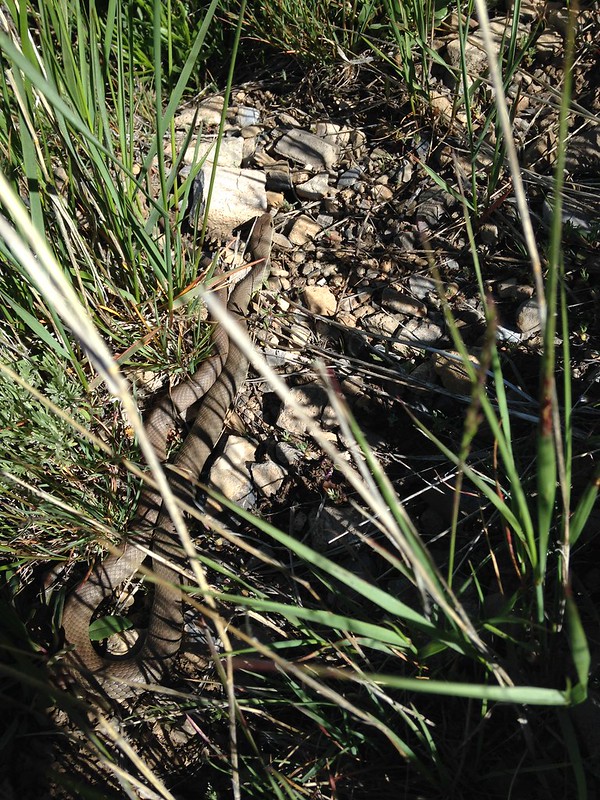 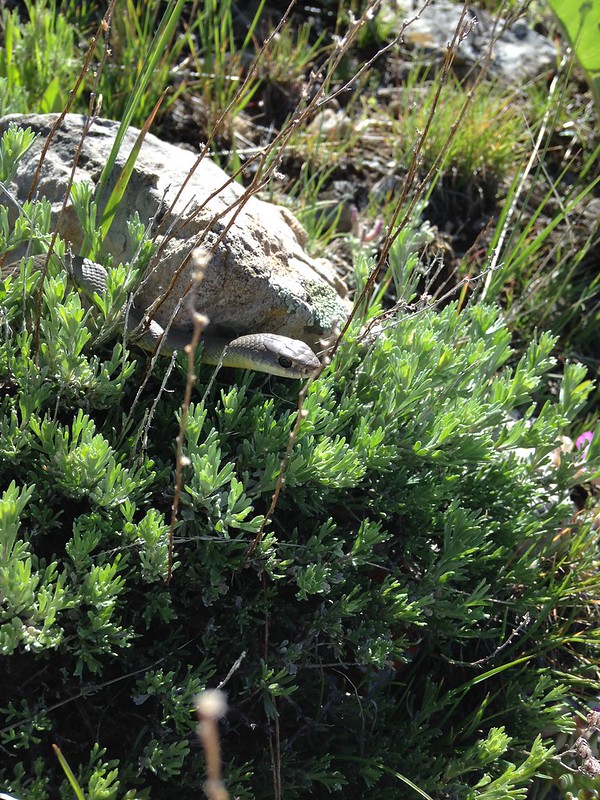 As I mentioned earlier, coming down this route was pretty difficult due to the trail. It doesn't switchback at all, and combine that with its steep grade and loose sediment, I was lucky to have only slipped once. I found that zigzagging on either side of the trail was the best way to descend.

This hike is roughly 6 miles round trip. I was able to do it in about 5 and a half hours including a 30 minute break on the summit. Nice way to spend a Saturday morning!

This peak has captured my attention for a long time. It looms over my ride home, catching my eye every time. For as long as I've lived in Providence I've had the goal of climbing it one day. That goal was made several years ago, and I finally got around to getting it done. Finishing this hike gave me a special sense of accomplishment. 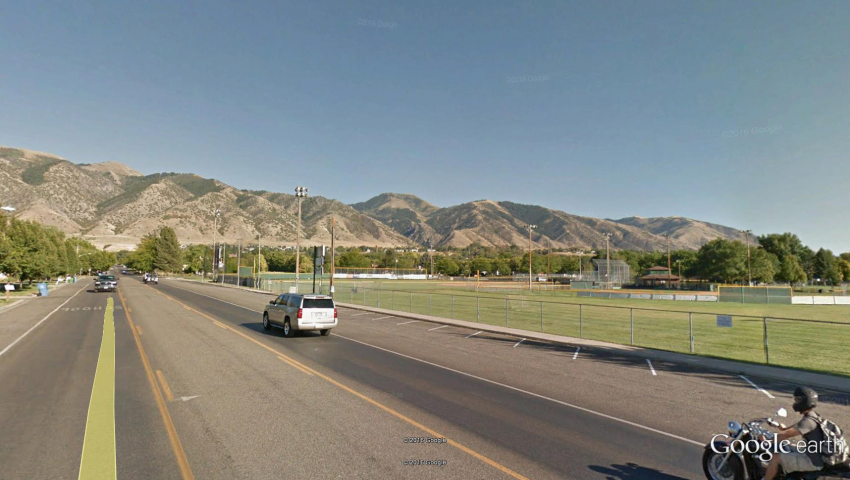 Just realized tonight that the photos aren't showing up. My bad! I'll work on it. On my devices they show up so I thought I was in the clear, but after using someone else's device tonight, I realize there's an error.

Ah yeah, I saw that when you first posted and was going to say something but got sidetracked. Looking forward to seeing the pics!
IG: @backcountrypost
J

Photos should be visible now. Enjoy!

Awesome! That brings back great memories of hiking the Bear River Range. Thanks for posting!
IG: @backcountrypost
D

Jeff,
I have been having a hard time finding info on getting to this peak that I also have wanted to conquer for the last few years. It is next up for me now. Where exactly did you start at the mouth of Prov Canyon?
Thanks
J

Dixie said:
Jeff,
I have been having a hard time finding info on getting to this peak that I also have wanted to conquer for the last few years. It is next up for me now. Where exactly did you start at the mouth of Prov Canyon?
Thanks
Click to expand...

I parked my car at that very first parking lot. The "trail" to the peak splits off the deer fence trail south of the canyon, so just walk a very short distance down that and you'll see it. Here's some coordinates in case you want to look at it on Google Earth: 41°41'31.08"N 111°47'43.02"W

I think that snake might be a racer.
We get them sometimes in my yard here.

I have been up Providence Canyon a few times, great to see it from a higher POV.
You must log in or register to reply here.
Similar threads