5: The Great Colorado Expedition of 2012, pt5...Yankee Boy and Governor Basins

Greetings again, and welcome to Episode V of the Great Western Expedition of 2012. Today we follow the intrepid Liberteers on the second day of the Ouray Jeep Jamboree, as we take it easy and head up into Yankee Boy Basin and Governor Basin. 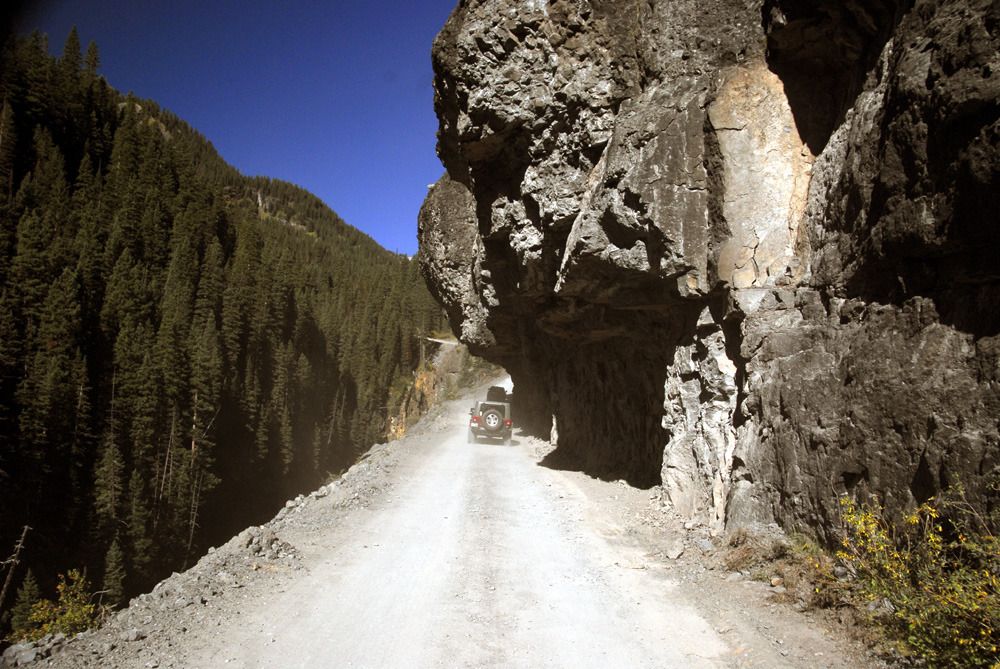 The road out of Ouray was pretty tame, but included this neat rock overhang. 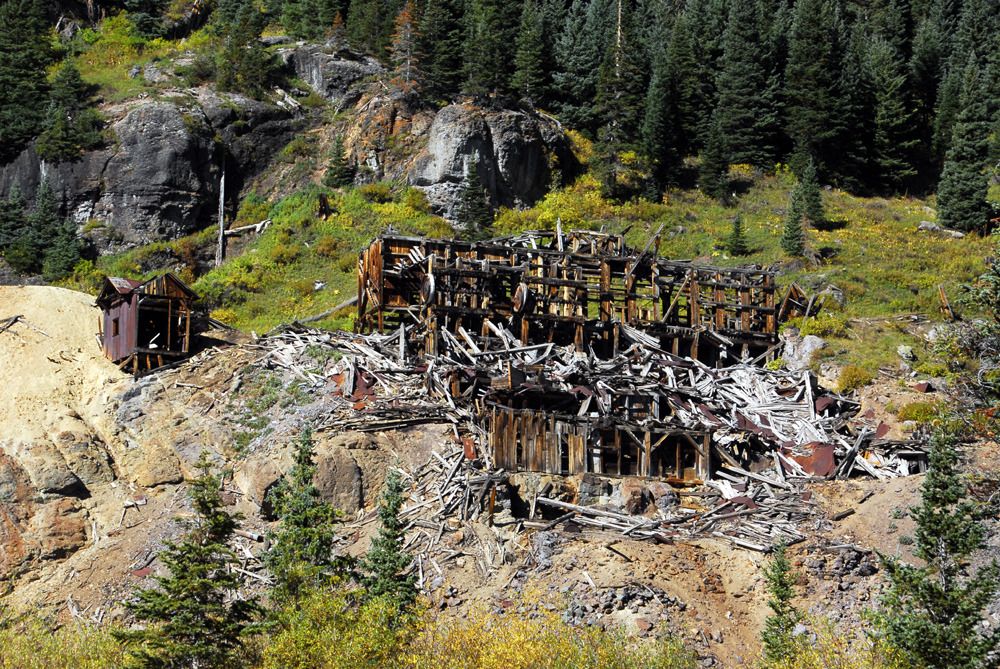 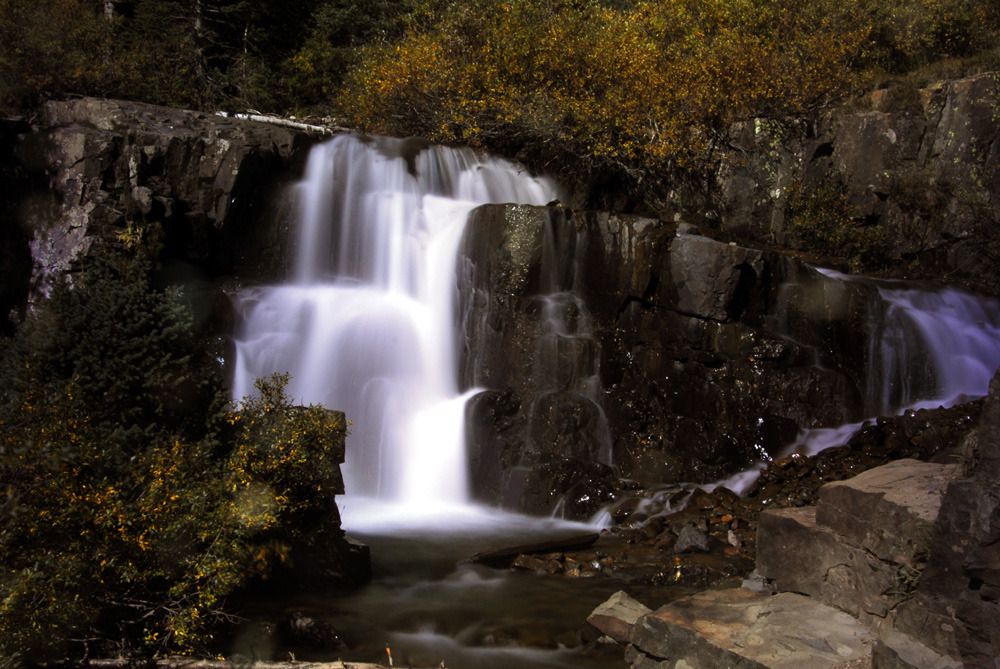 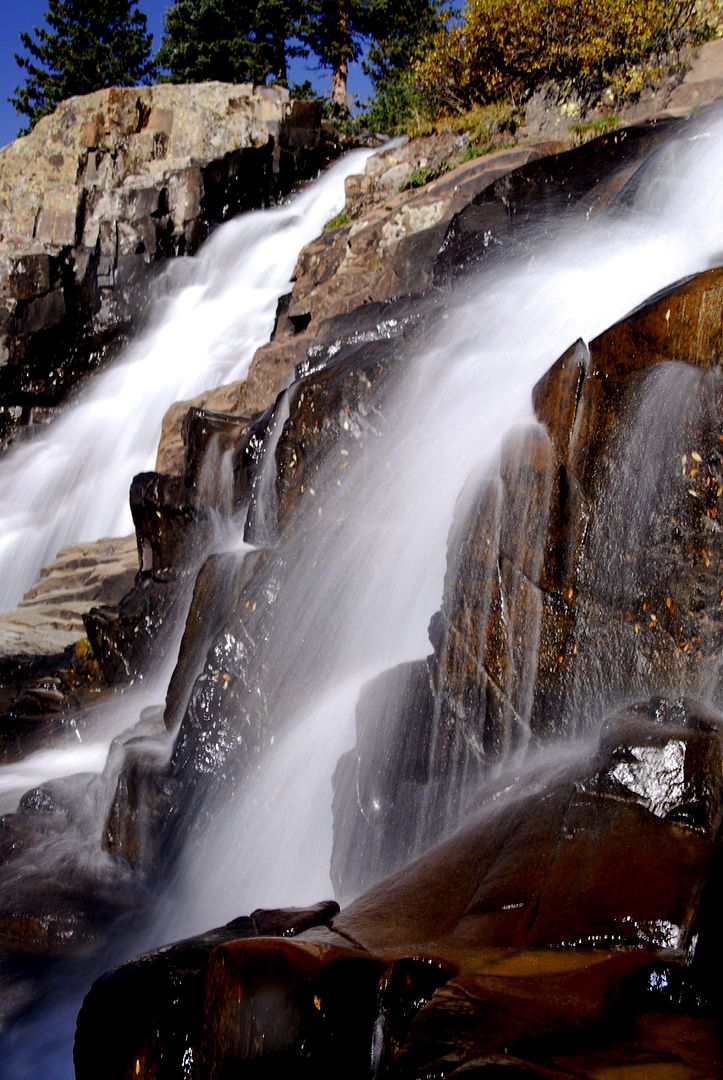 Allegedly, this is the waterfall found on Coors beer cans. 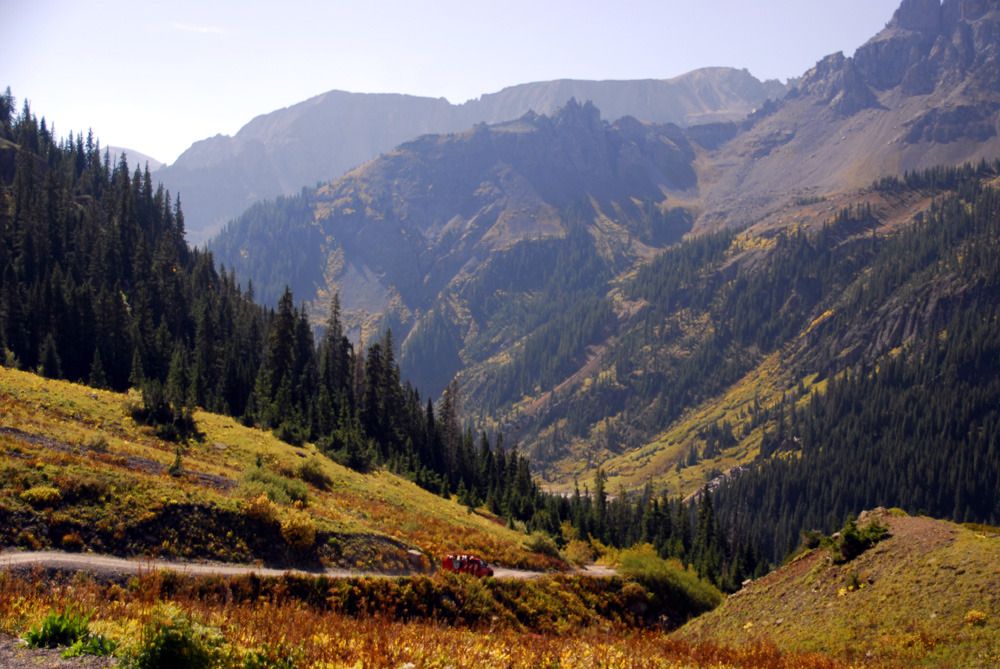 The view back down the valley towards Ouray. Also seen in this shot is a "shake and bake" tour truck. 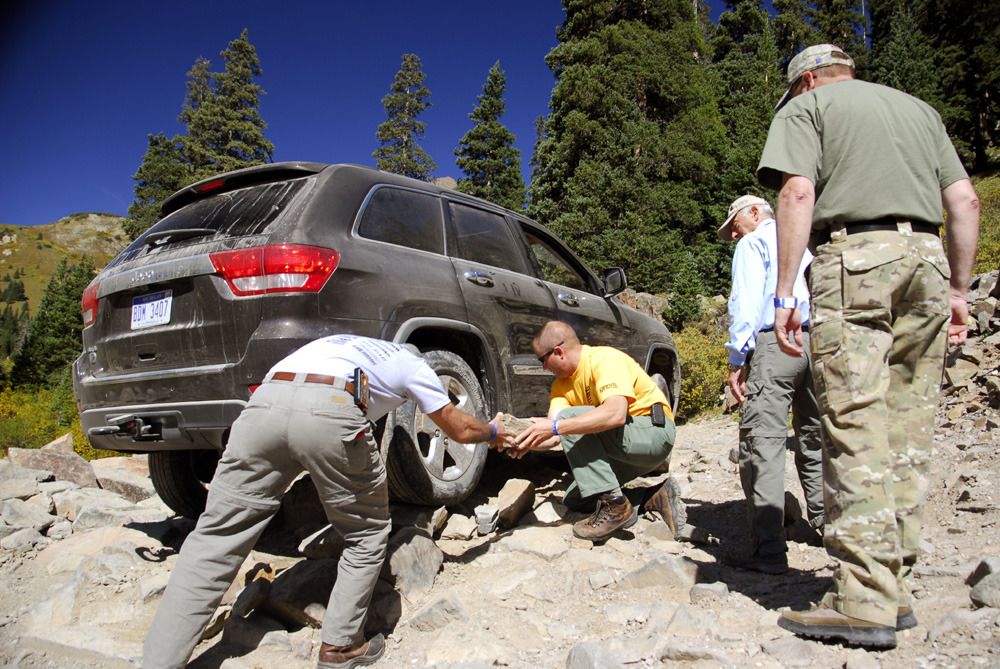 The road up got a little more difficult once we passed the pit toilet...heck, we saw several regular cars at the pit toilet parking area. This Grand Cherokee got high-centered on one of the rocky sections of the trail...had the driver taken a better line, he would have made it without a problem. 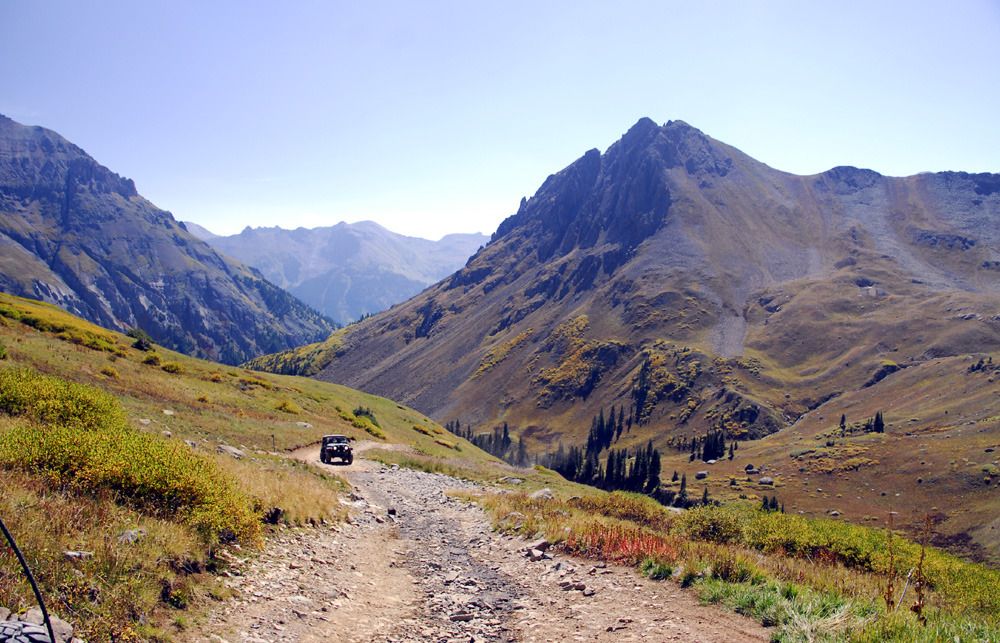 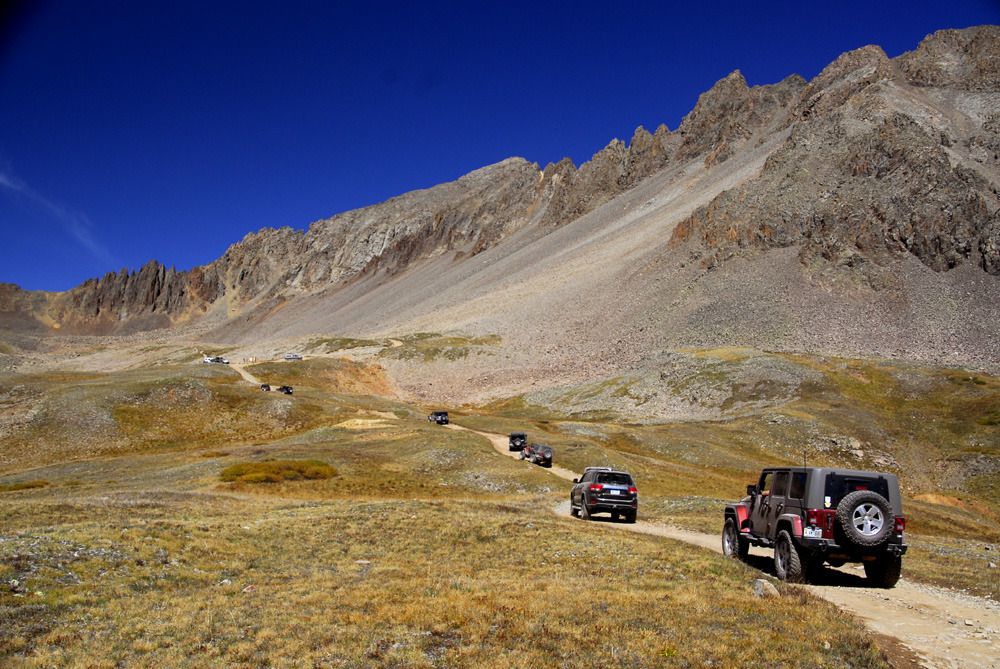 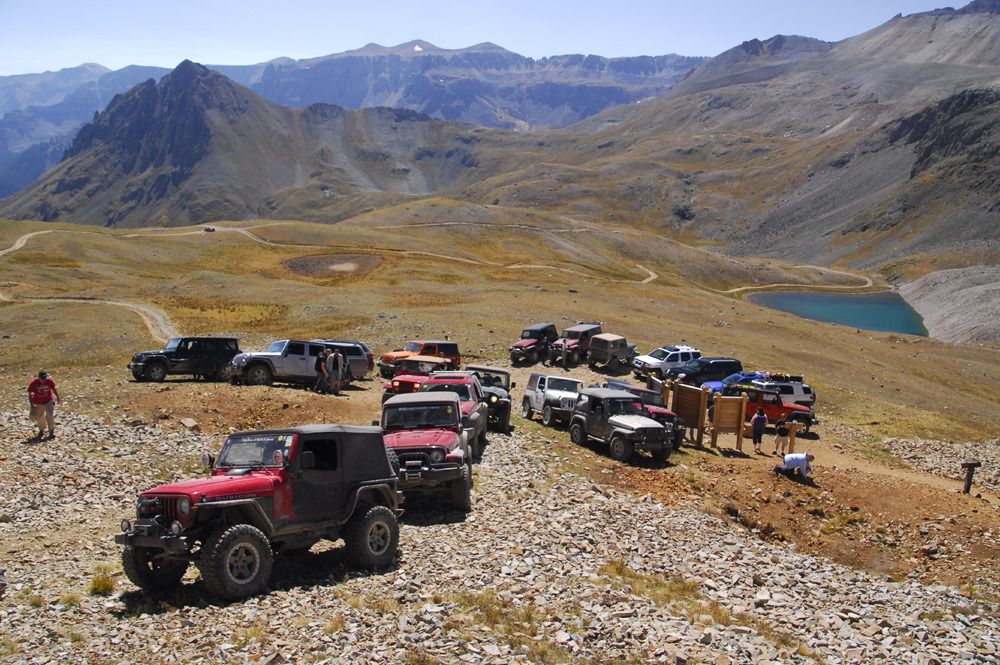 We parked at the top of Yankee Boy Basin and had lunch. Linda decided to look for rocks (that's my story and I'm sticking to it.) 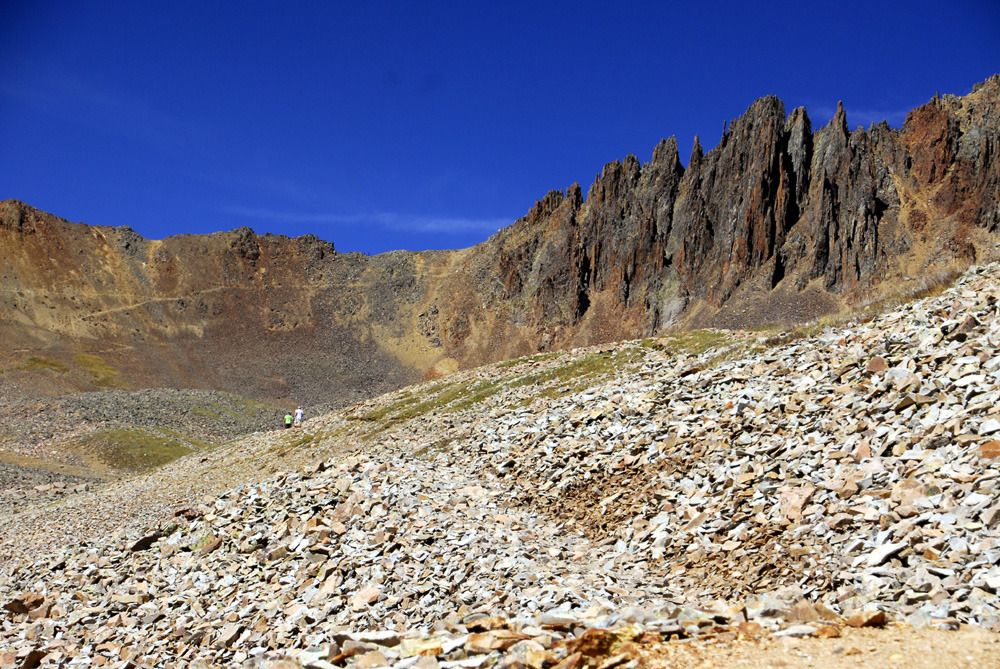 There are a couple of hiking trails that continue on beyond the mountains. 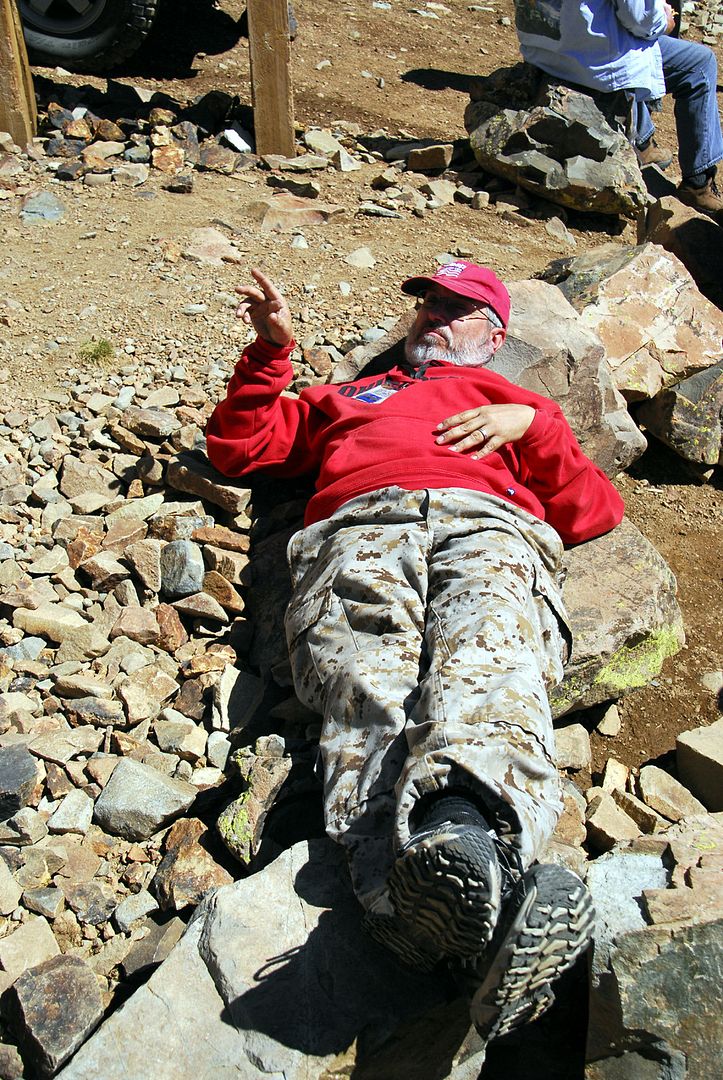 I found myself a nice flat rock to sun myself on as I attempted a Jedi mind trick on a fellow Jamboreer..."Those are the M&Ms I've been looking for..." 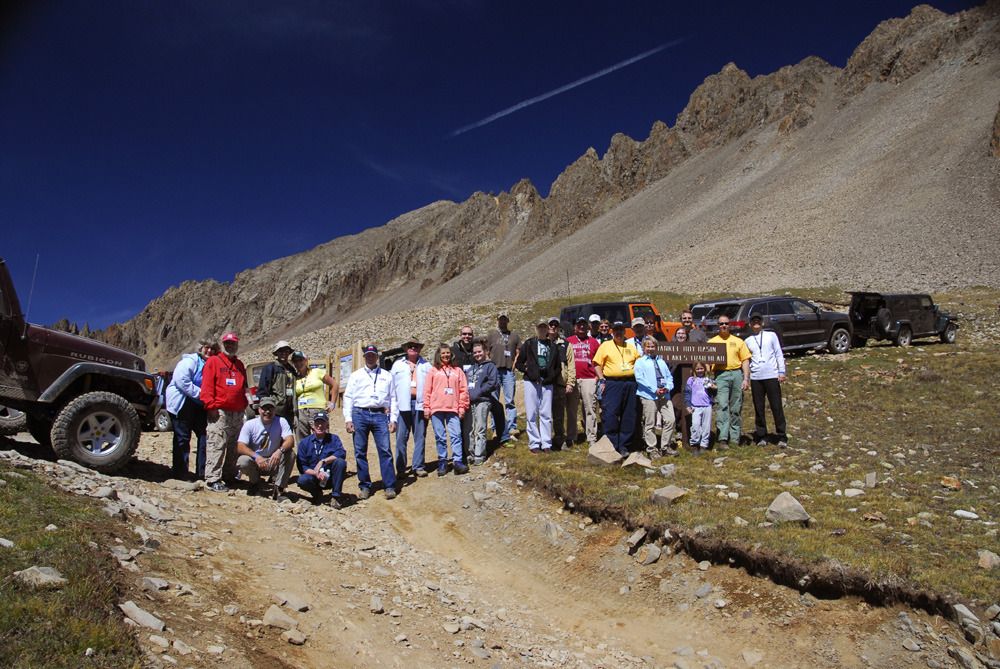 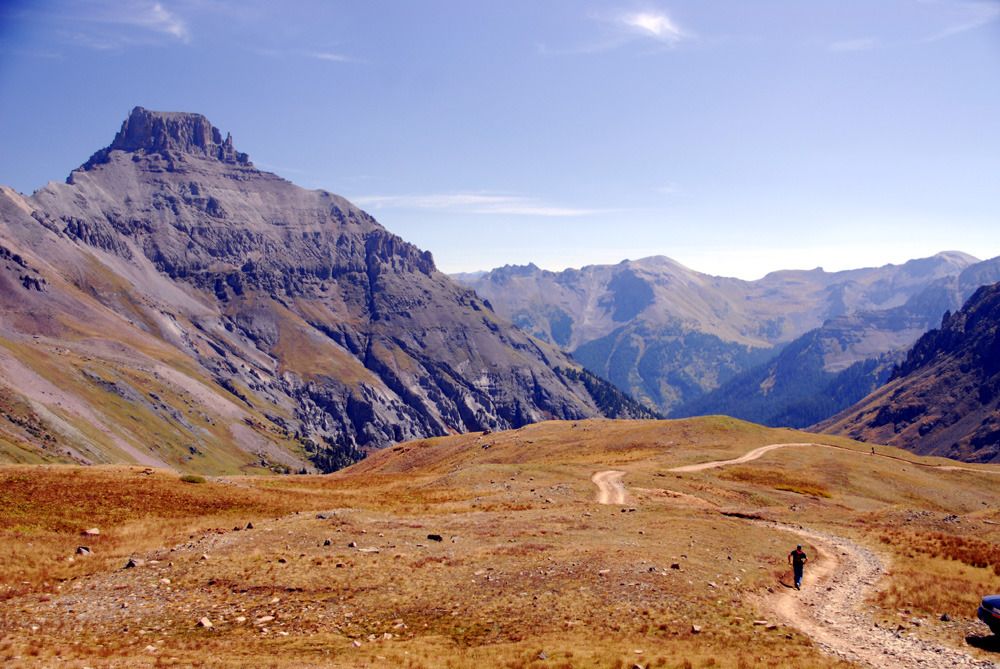 After lunch, a nice rock nap and some M&Ms, we turned around and headed back down out of the basin. 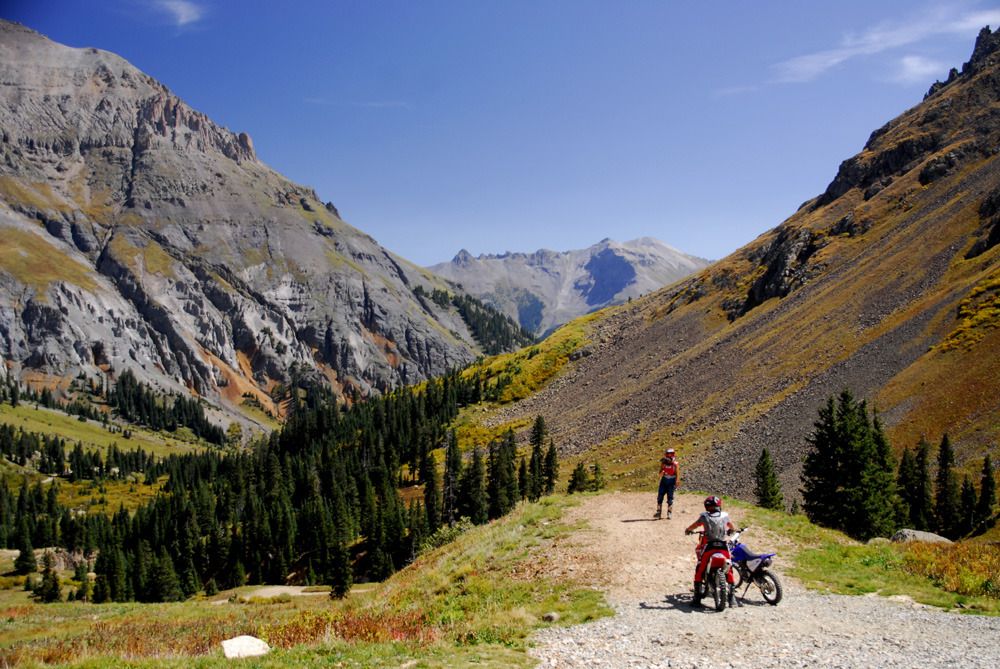 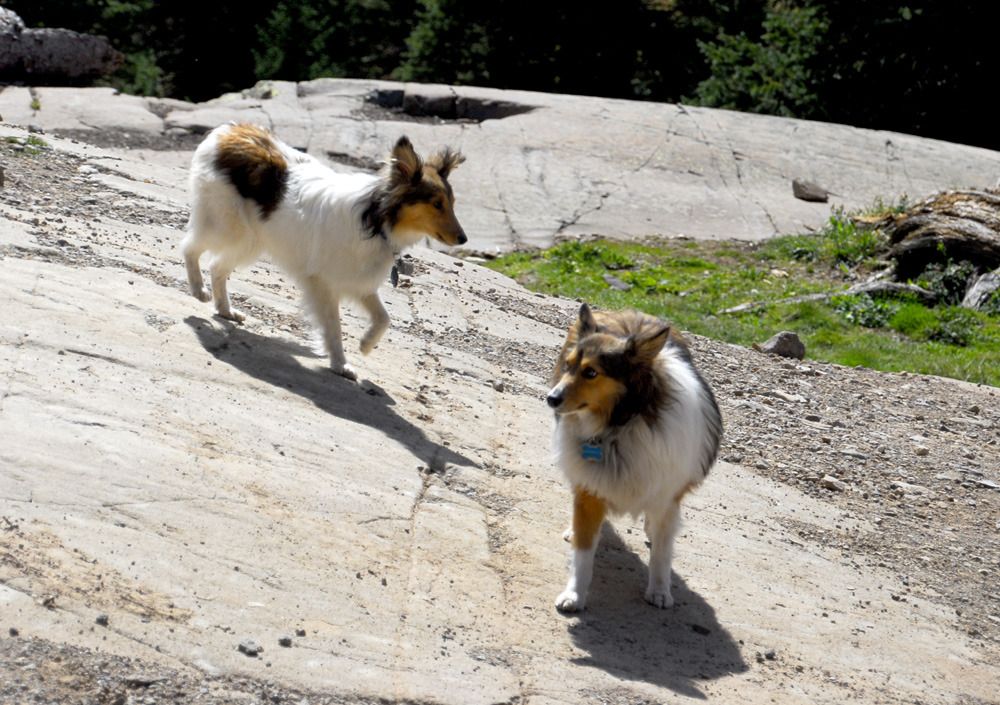 On the way back down, we were delighted to see some of the local wildlife...the elusive Mountain Shelties! 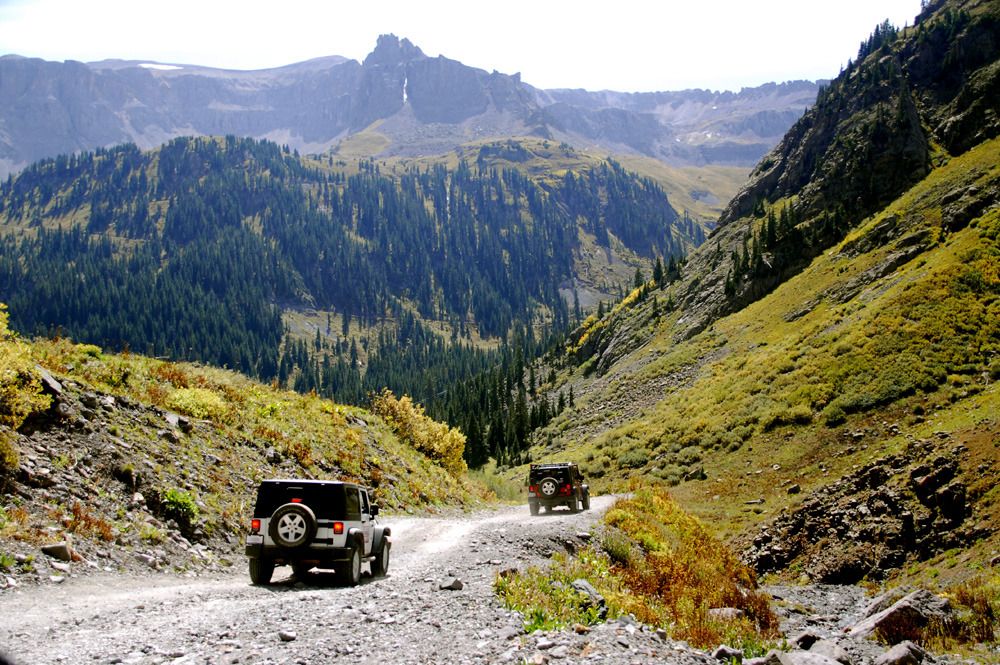 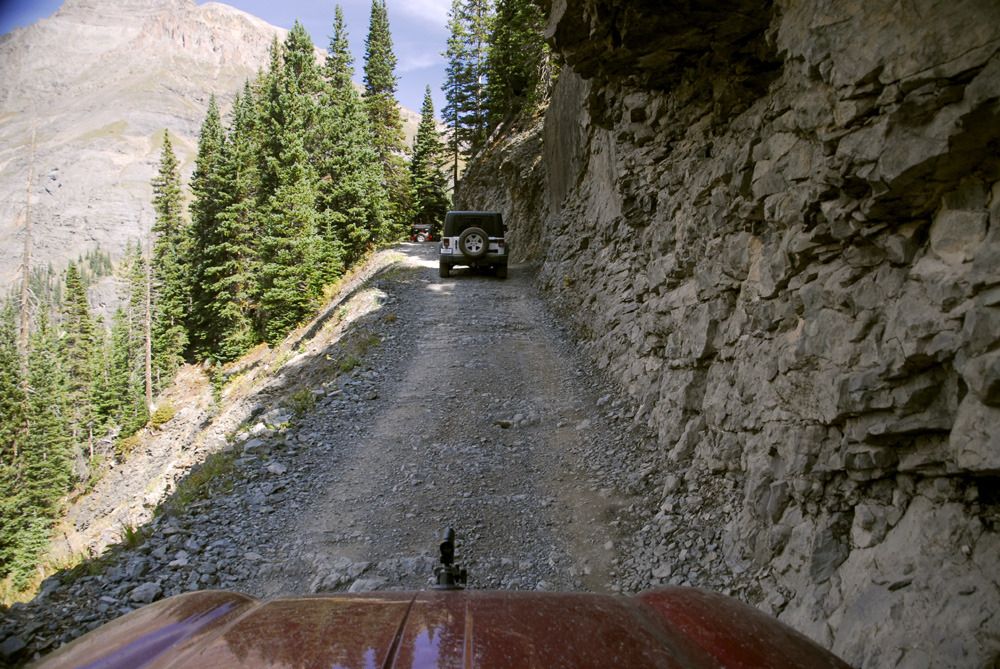 On the way up to Governor Basin. This route was a little more difficult than the route up to Yankee Boy. A little steeper, a little narrower, and very scenic. 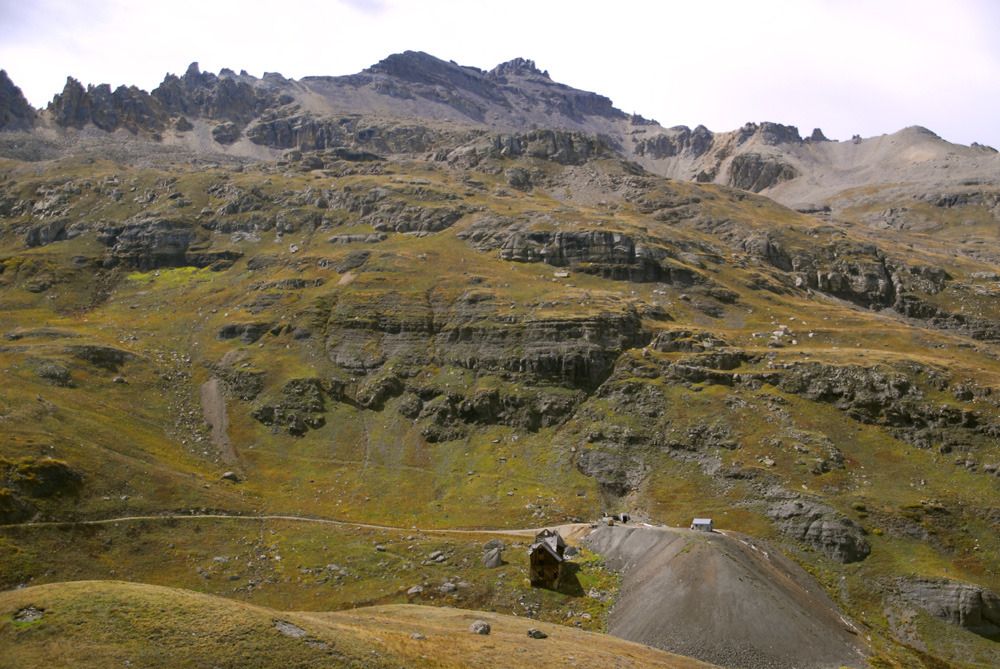 With the price of gold what it is, some of the old mines have been reactivated. 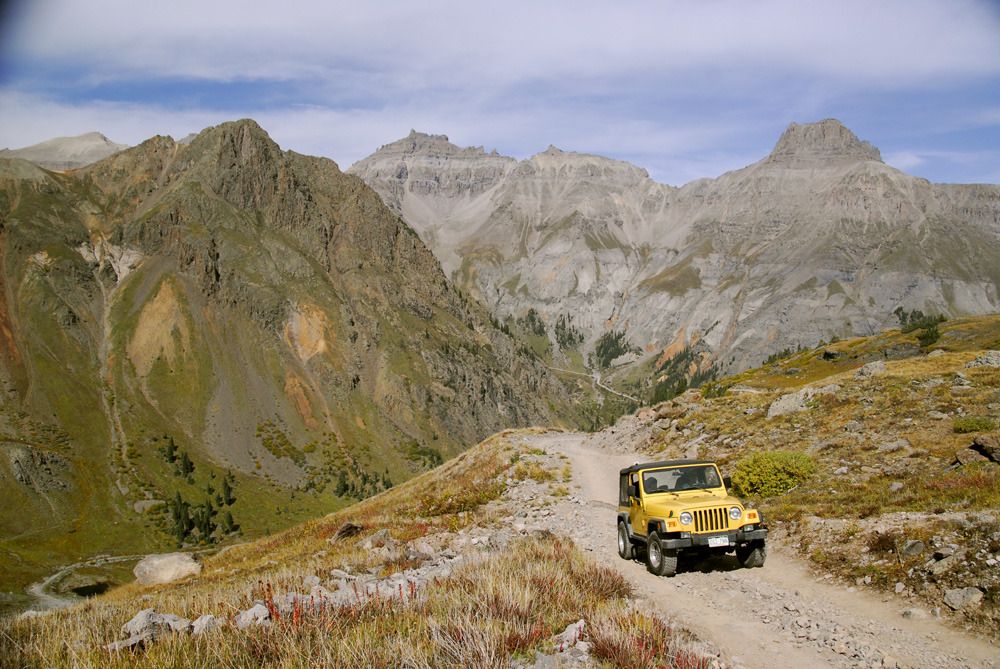 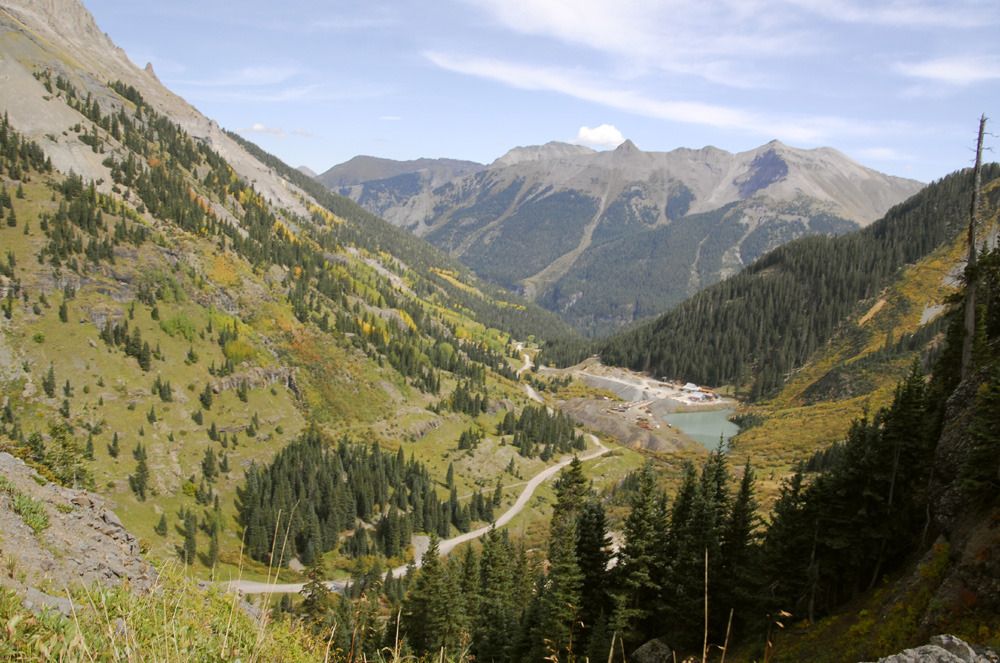 The view back down the valley to the Camp Bird Mine, another soon-to-be-reactivated mine. 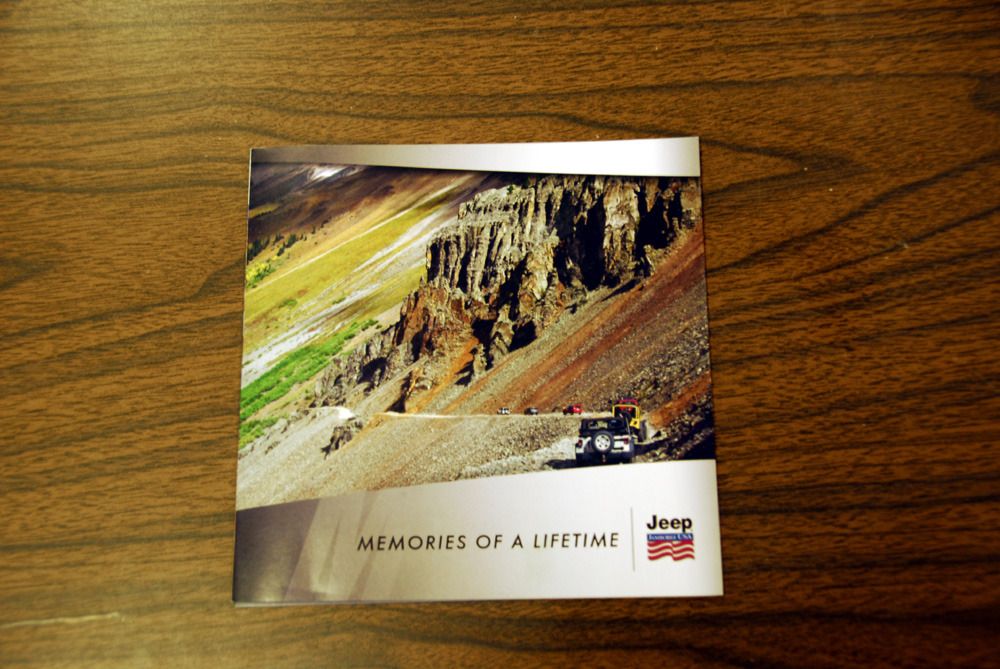 We returned to the Ouray Community Center for dinner (which, to be honest, was nowhere near as good as the past two Jamborees we've been on...the restaurant that catered the JJ in previous years closed up, so another restaurant was brought in to provide breakfast, bag lunches and dinner...you could patch a tire with the roast beef, and you needed a rock hammer to get into the baked potato...but I digress). Each place setting had a JJ survey sheet and this brochure... 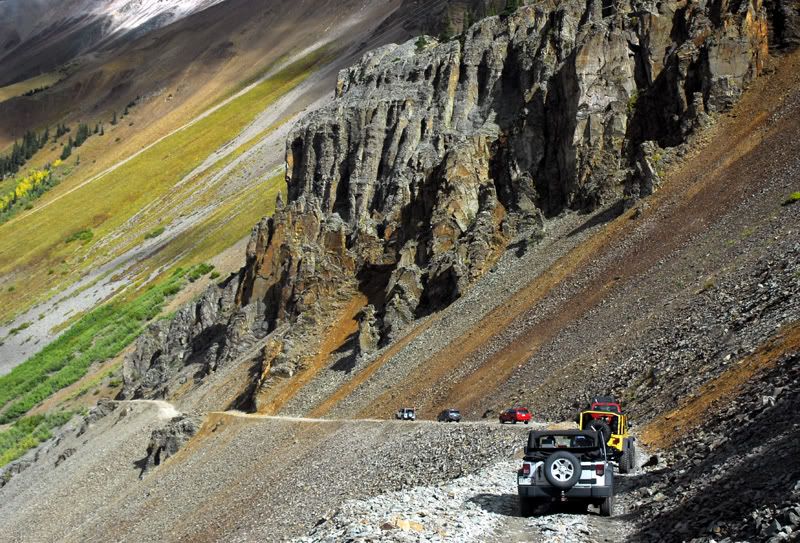 ...Linda noticed that the image on the cover looked kinda familiar...it was the same image she has as her wallpaper on her computer at work. I shot the image on our first Jamboree in 2009 on the Ophir Pass shelf road, and provided the image to the Jamboree as part of their photo contest (and also signed away all rights to the image, which allowed them to use it without cutting me a check.) I don't mind, really, but it would have been nice to have added a credit line.

In our next episode, we head north via Owl Creek Pass and set sail for Carbondale, near Aspen, and a date with the Devil's Punchbowl and Schofield Pass.