We got up early the next morning and broke camp. I finished off my oatmeal and instant coffee, which was a bit disappointing considering that we were only a few miles from Dubois. Since we finished our backpacking trip a day early, we had a full day to kill. We decided to make the most of the opportunity. First on our agenda was another attempt at finding some of the Torrey Creek petroglyphs. I’d gotten some information from my friend Dave in Lander, and we thought we had a better chance of finding them. It still took a lot of wandering around, but Larry finally stumbled upon a rock art panel. I caught up with him, and we found a few more in the immediate area. The sunny morning wasn’t ideal for photos, but it was neat to see them. 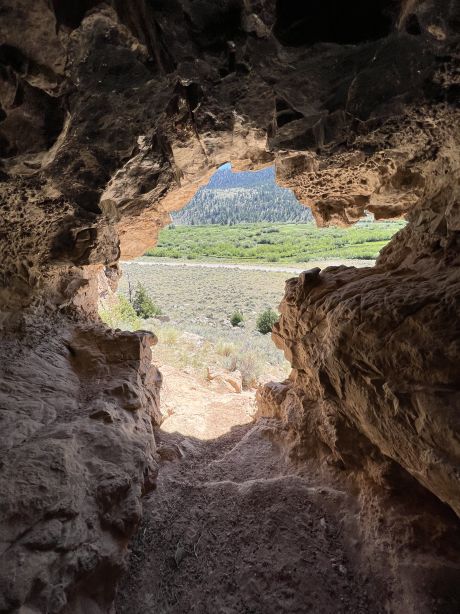 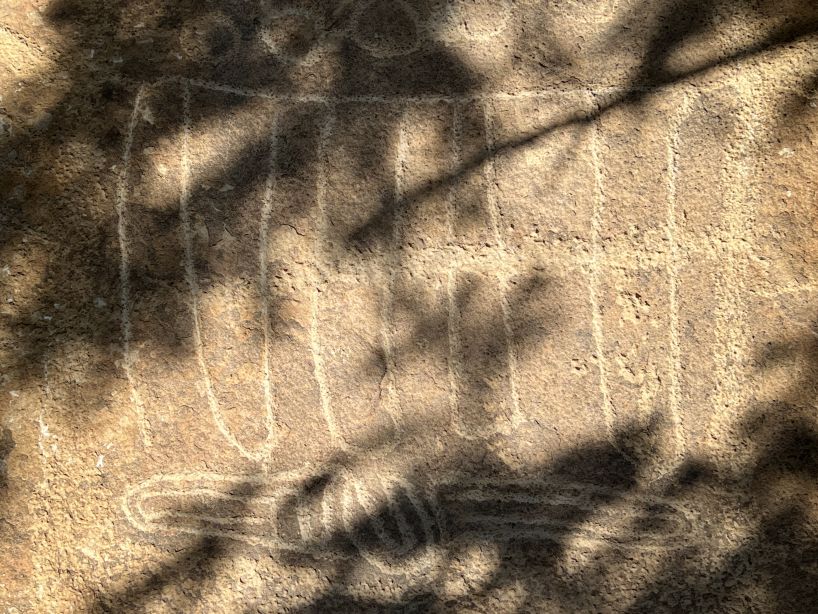 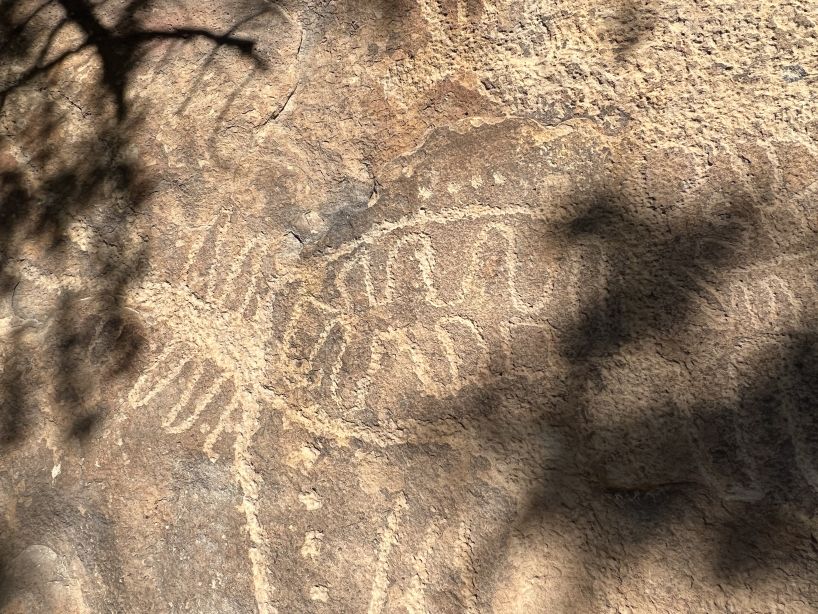 Torrey Basin Petroglyphs
​
We drove into Dubois, made a quick stop at the store, and then headed back out towards Brooks Lake. Our main plan for the day was a dayhike to Holmes Cave. Holmes Cave is a limestone cave with a stream running into it. The stream drops over several waterfalls shortly after it enters the cave. The cave hasn’t been fully explored – apparently it is unstable and is considered too dangerous for a thorough exploration. Despite that, I still wanted to see the entrance.

I parked the rental car in a large pull off well short of the actual trailhead. The forest road leading to it had a deep mudpuddle just beyond the highway, and I wasn’t sure if the car would make it through. Fortunately it was just a short walk from the parking spot to an old cabin and the actual trailhead.

We started our hike late that morning under sunny skies. It didn’t take us long to find the real highlight of the hike – a massive field of sunflowers. They were a little past peak bloom, but there must have been thousands of them. Aside from the flowers, there were some great views. The best scenery was the rugged cliffs of Breccia Peak. 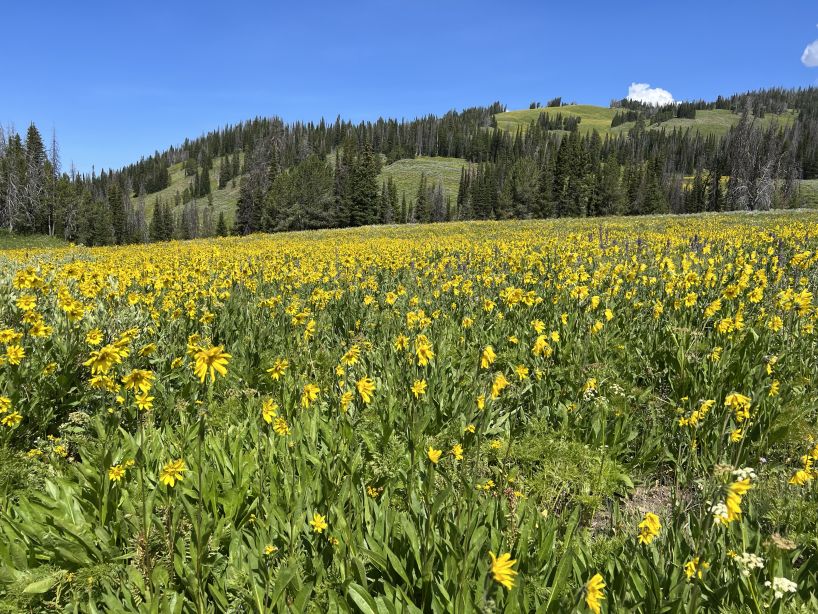 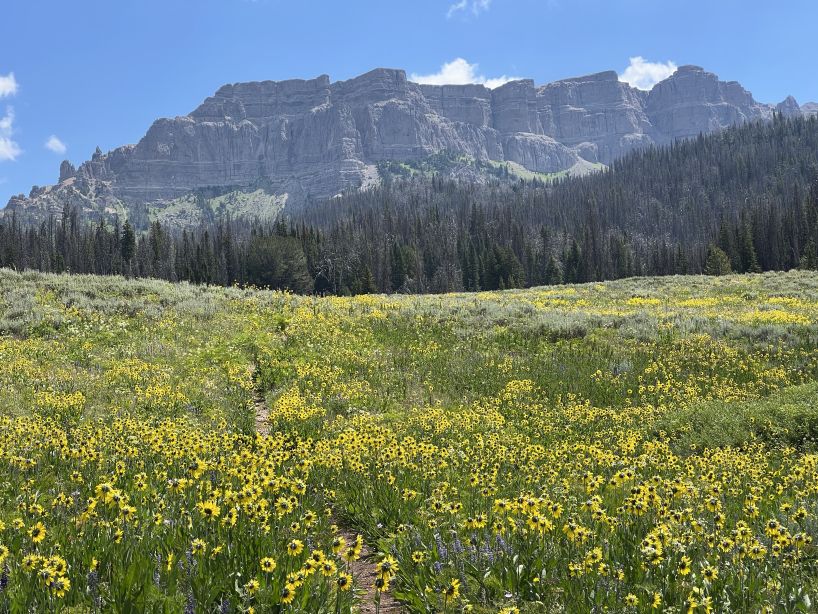 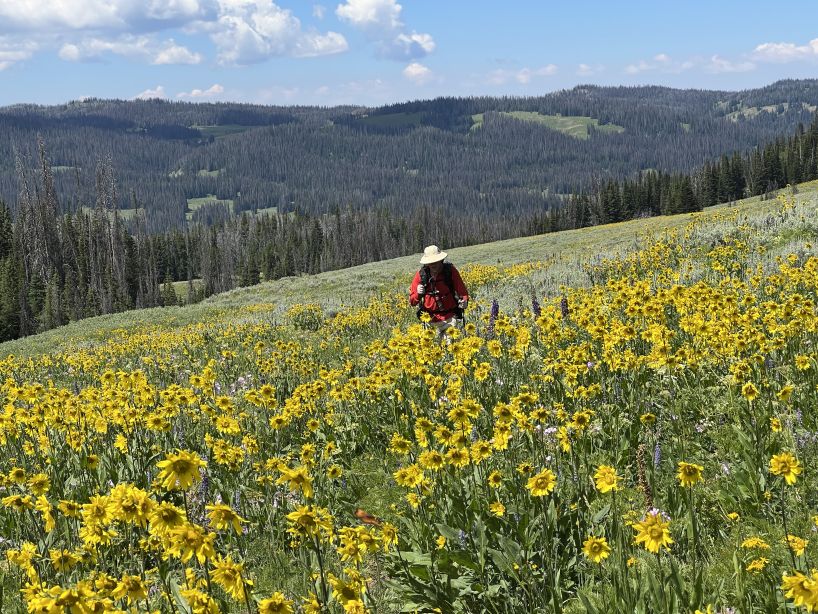 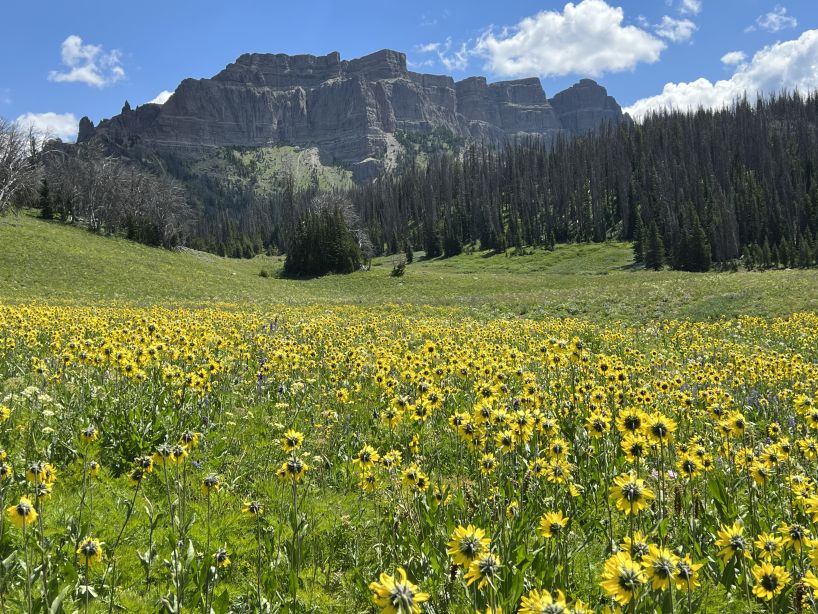 Sunflower fields along the trail to Holmes Cave 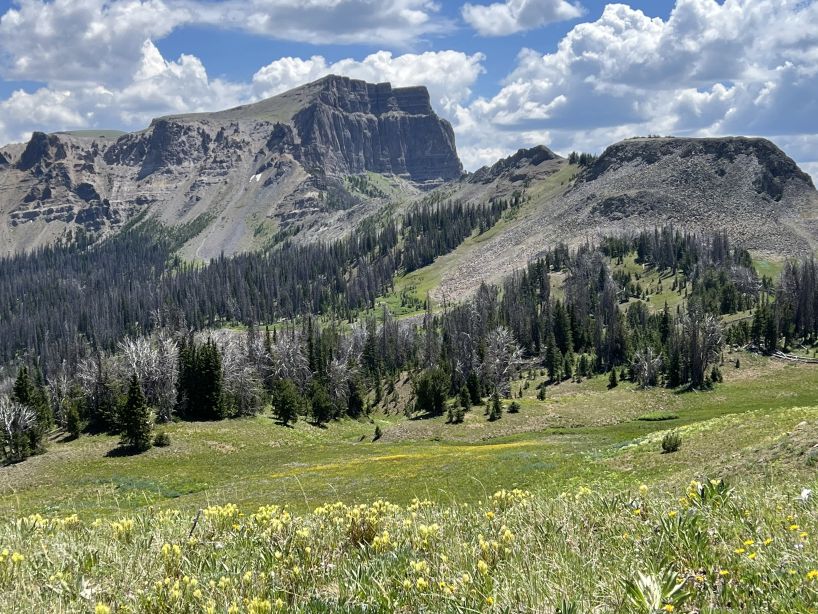 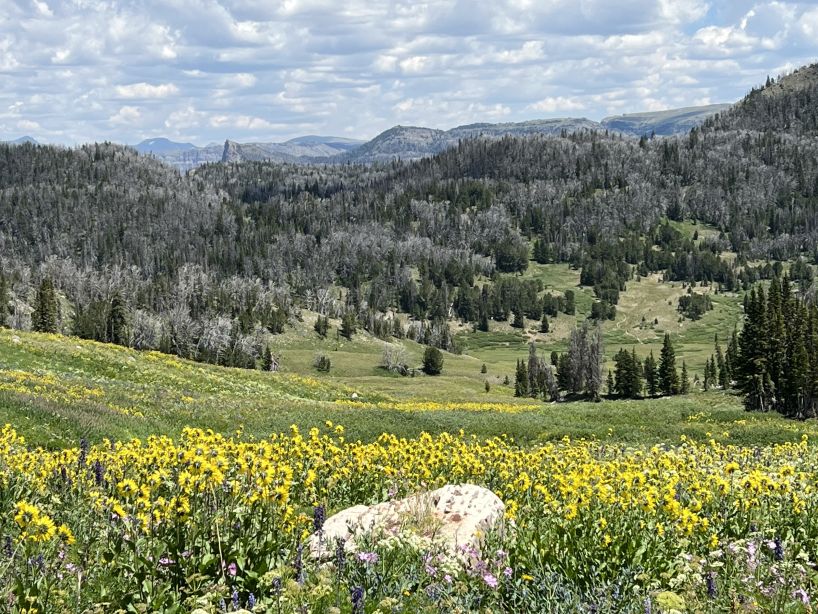 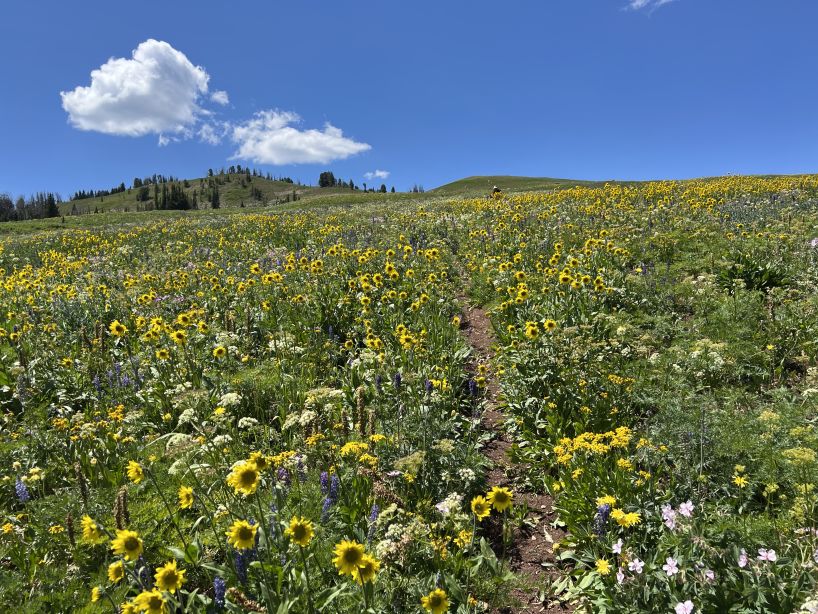 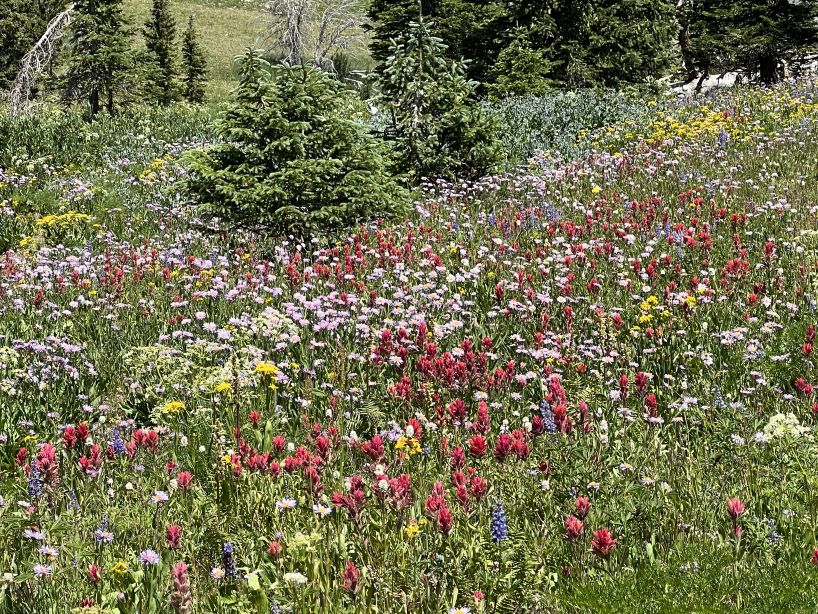 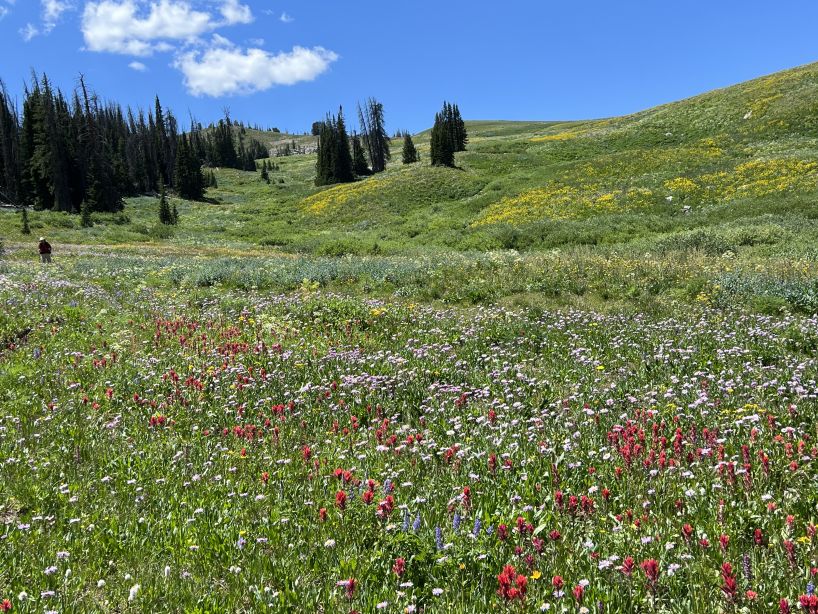 ​
We climbed to a minor pass near Angle Mountain. We had lunch there before continuing down through another incredible wildflower meadow to a small pond. From there it was short descent to a meadow where several small streams come together. The combined stream runs directly into the side of a hill. We checked out the entrance of the cave, which is guarded by extremely slippery rocks. I thought about scrambling in there to check out the first waterfall, but it was so slippery that I didn’t think I could get in and out of there without a fall. 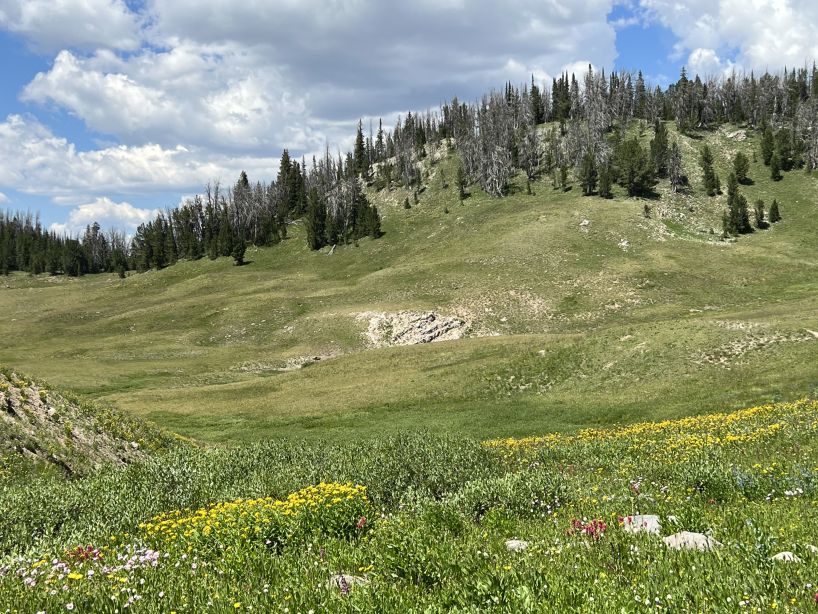 Do you see the entrance to the cave? 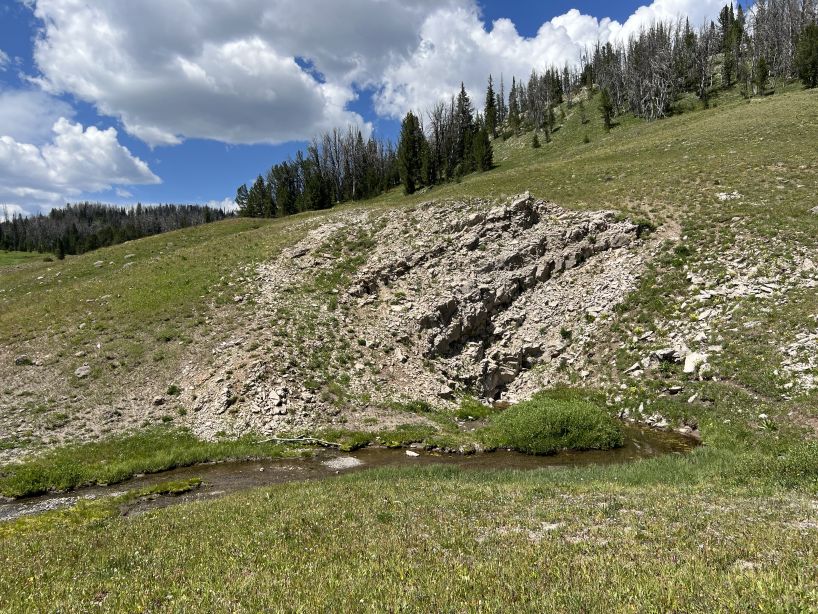 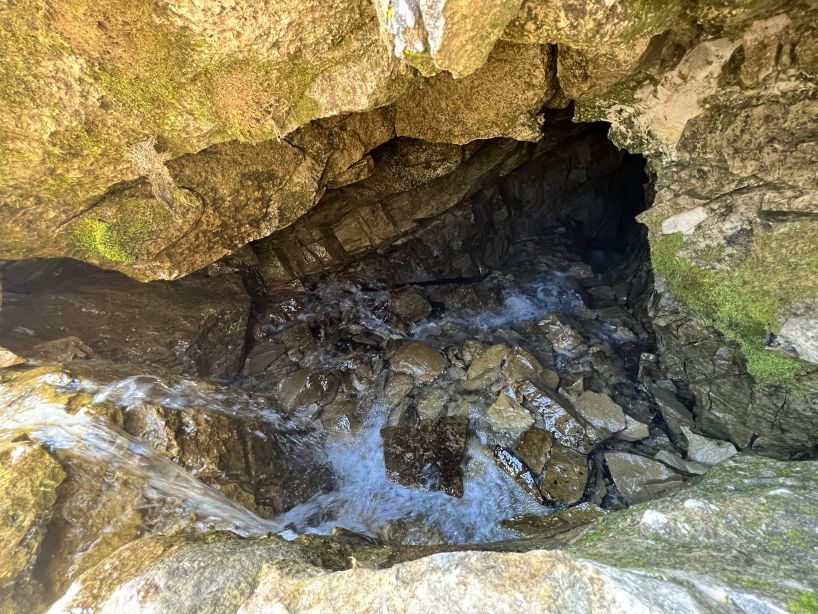 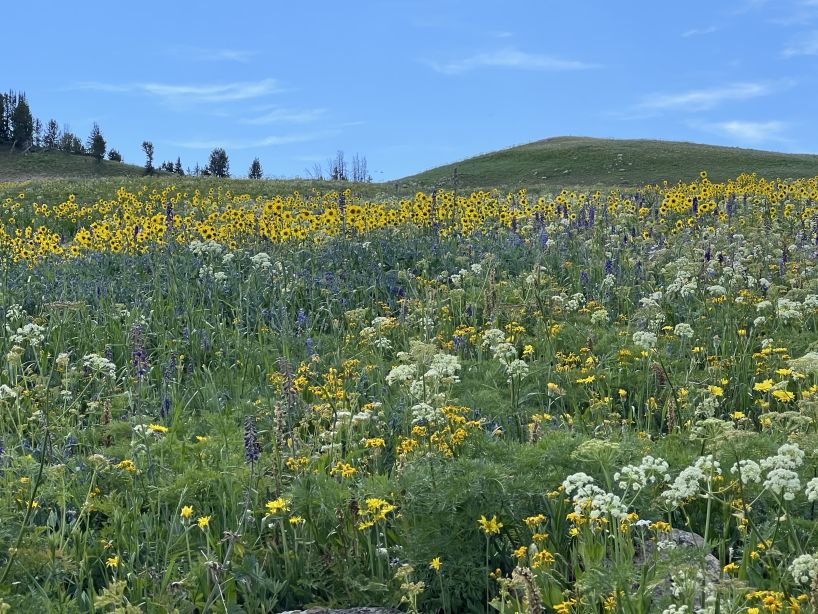 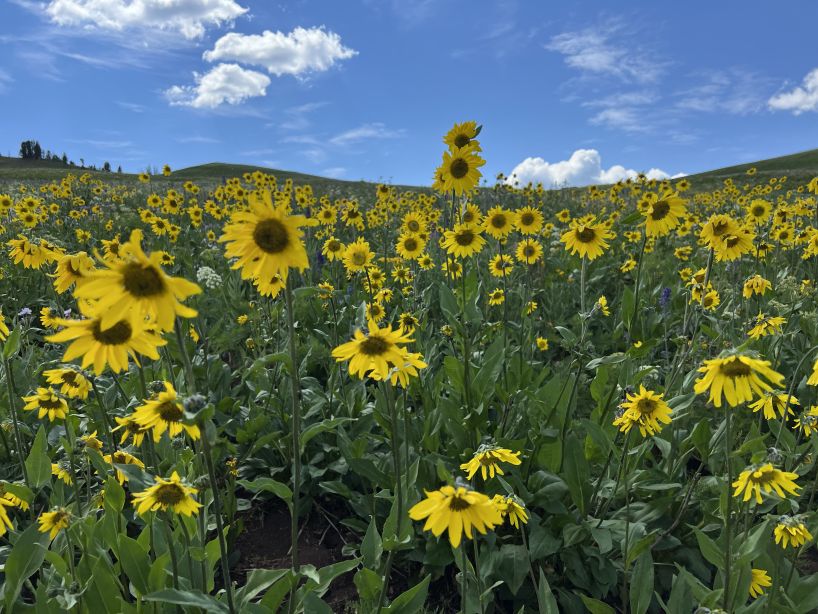 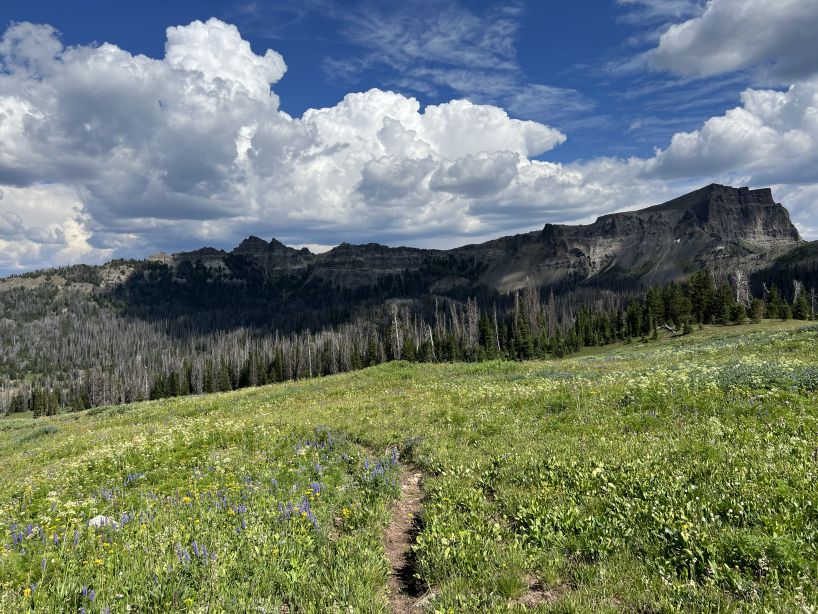 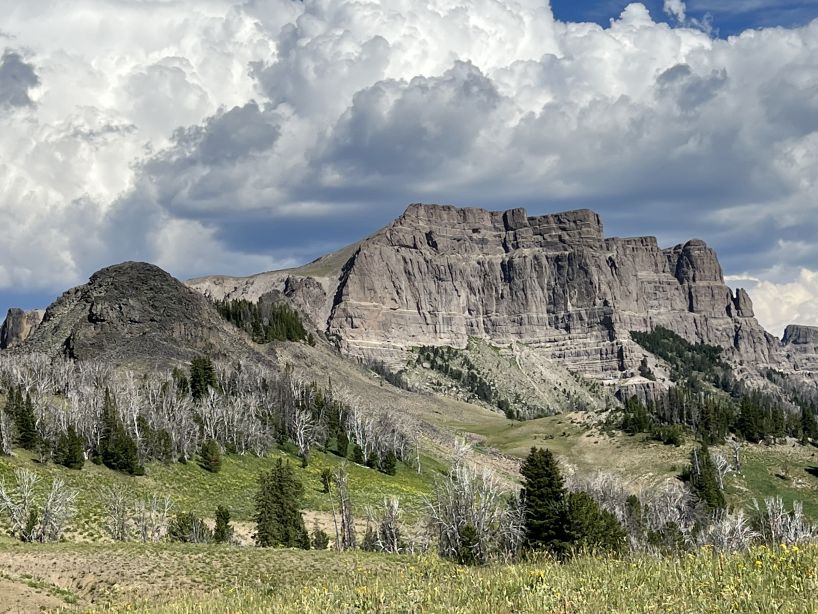 ​
We returned by the same route. Dark clouds were building on the way back, but once again the storms missed us. We drove through storms on the way to Lander, but the weather had cleared by the time we reached town. We checked into the Holiday Inn Express before heading to Cowfish in downtown Lander for dinner. We had a great meal there, and I enjoyed a couple of beers before heading back to the hotel.

The next morning we met Dave at Mamaw’s Kitchen for breakfast. The meal and coffee were good, and we enjoyed catching up with Dave and telling him about our trip. We had some time to kill, so we took the scenic route out of town. We stopped at Sinks Canyon State Park, and then drove up the Louis Lake Loop Road. We stopped at Frye Lake to check out the view before continuing on to the trailhead for Blue Ridge Lookout.

We did the ½ mile hike up to the lookout. At the top we found a small meadow and several impressive rock towers. I somehow missed the sign for the Blue Ridge Lookout and scrambled up the wrong tower. That was kind of fun, and it provided a cool view of the actual lookout. I worked my way back down, and then climbed the steps of the true lookout. The steps were the best part of the experience. They were very colorful, due to lichens on the rocks. The view of the Wind River Range from the top was nice, too. 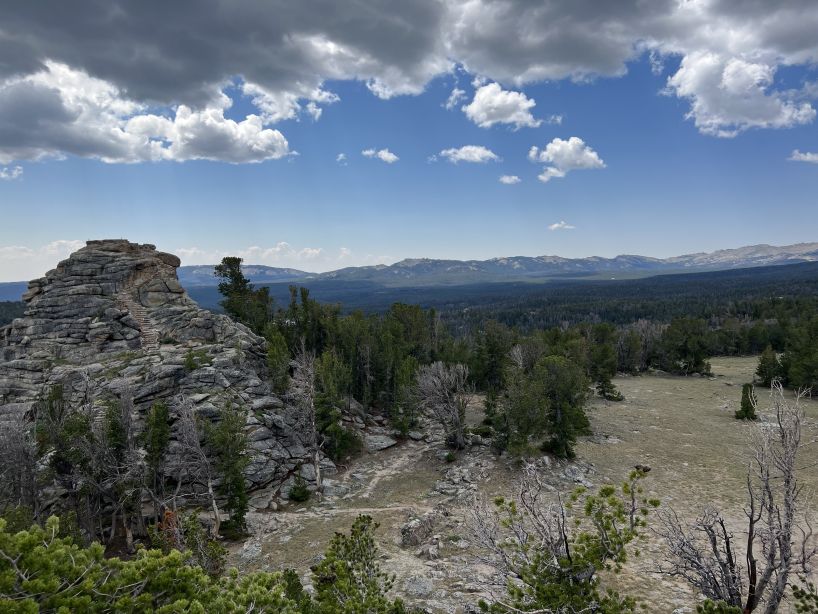 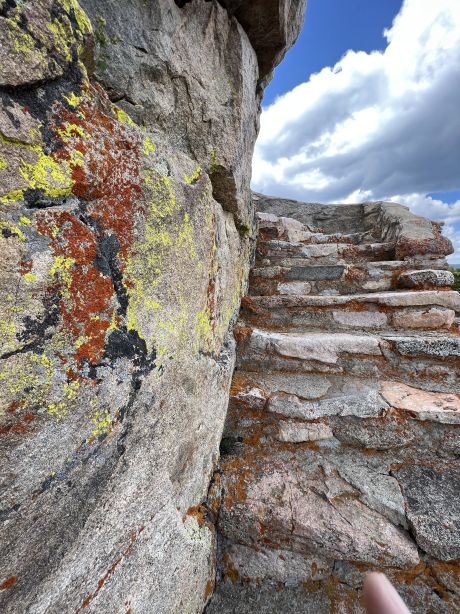 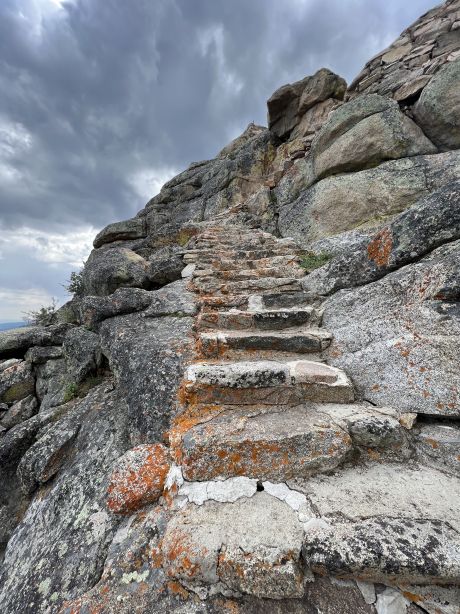 We continued on the loop road afterwards. We met a couple as we were leaving the trailhead that had just seen a moose. We kept a close eye out, but we didn’t spot the moose or any other wildlife of note. We drove the rest of the loop road before heading back towards Lander. We passed the Red Canyon overlook and then continued on toward Rawlins. Our next stop was dinner at Vern’s just outside of Fort Collins, CO. The rest of the drive to the Denver airport was smooth, and the flight home went well.

I definitely plan to revisit the Teton and Washakie Wilderness areas. I need to go back to see Ferry Lake, since I missed it on this trip. I’m also interested in visiting Tri County Lake, and I want to make another attempt at Younts Peak. The South Fork of the Shoshone River valley is intriguing too, as is the headwaters of Thorofare Creek and Open Creek.

Love the massive fields of wildflowers. Great TR series, really enjoyed it, thanks for sharing.

So that's a wrap. Thanks for taking us along on your adventure!
https://steveriggs.smugmug.com
W

Thanks Fungi for sharing the details of your trip... and the amazing photos. 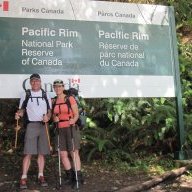 One of the best trip reports ever.
F

dpnoll said:
One of the best trip reports ever.
Click to expand...

Wow, thanks!
You must log in or register to reply here.
Similar threads