“It's very far away
It takes about half a day
To get there
If we travel by my... Dragonfly


Our final morning started with an unusual sunrise. When I got up, I found myself enveloped in fog. Everything was soaking wet from the dew. Were we still in Wyoming? The sun was just cresting the ridge behind us, but it was just a faint, distorted yellow disk through a prism of mist. 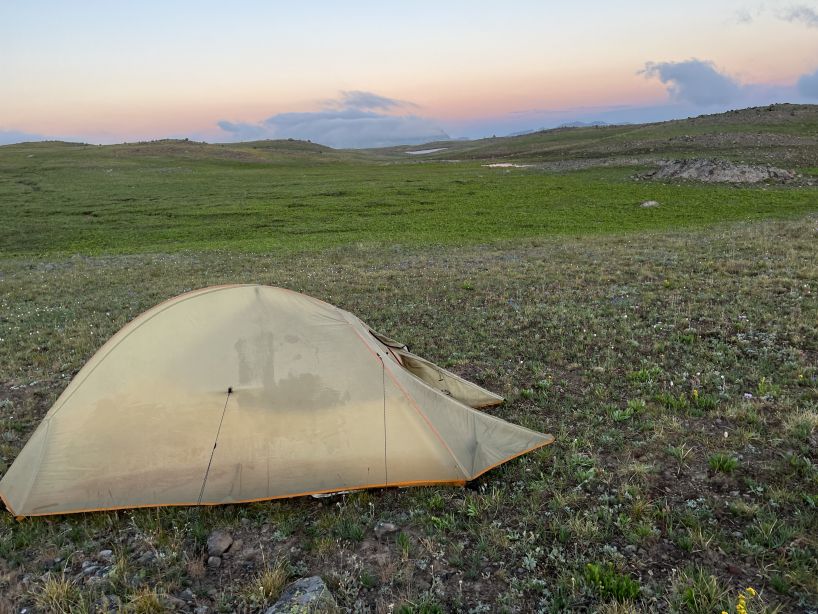 Sunrise at our last campsite
​
We packed up and started hiking west, continuing through a maze of grassy hills and gullies. The rising sun gradually burned off the fog, and views of the surrounding terrain slowly came into focus. Initially our only views were north across the Cub Creek valley. Once we rejoined the Continental Divide we began to get views to the south as well. The best view was a peek at the Pinnacle Buttes with fog clinging to the summits. 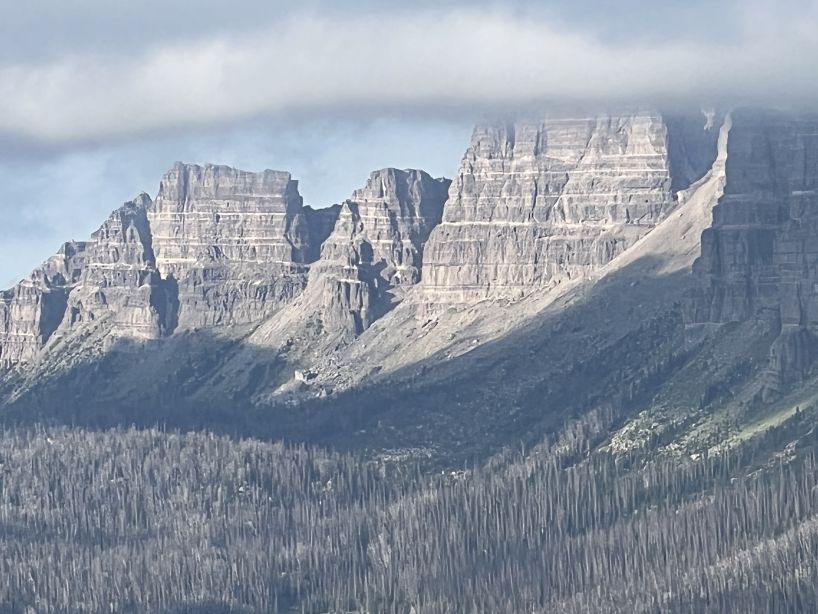 The Pinnacle Buttes emerging from the fog
​
A steep descent through scattered trees led to a gap, and an unexpected trail crossing. A trail descends steeply into the woods to the south here. It isn’t on any map I’ve seen, but I’m guessing it drops down into Dundee Meadows. The same trail continues north as well. The terrain is even steeper in that direction, but it may find its way through the cliffs and down towards Cub Creek? A trail also continues west, along the Continental Divide. We followed that trail steeply up from the gap, staying close to the divide. We crossed a couple of knobs and passed a small pond. One final climb led up to some great campsites and a dramatic viewpoint. The Continental Divide follows a ridge at the top of a huge band of cliffs. The ridge itself has giant boulders and eroded hoodoos. Even better, it offers stunning views of Dundee Meadows and the Pinnacle Buttes. From that vantage, the cliffs look like the battlements of a massive castle in the sky.

We took a long break there, mainly because the spot was too magnificent to rush past. I scrambled up one of the boulders, which gave me even more expansive views. I could even see the peaks at the north end of the Wind River Range from there. 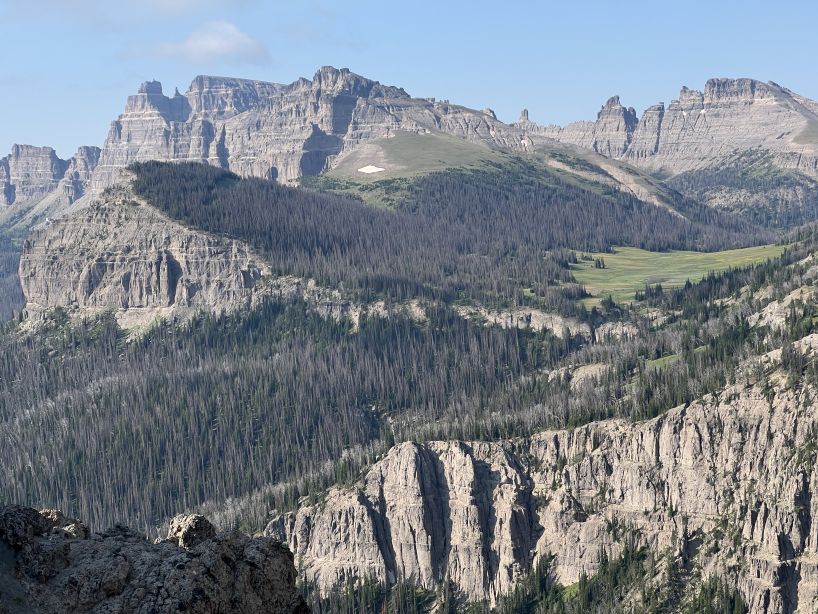 The Pinnacle Buttes
​
We couldn’t stay there forever, unfortunately. We eventually packed up and resumed the journey. We followed the edge of the escarpment to its western end. 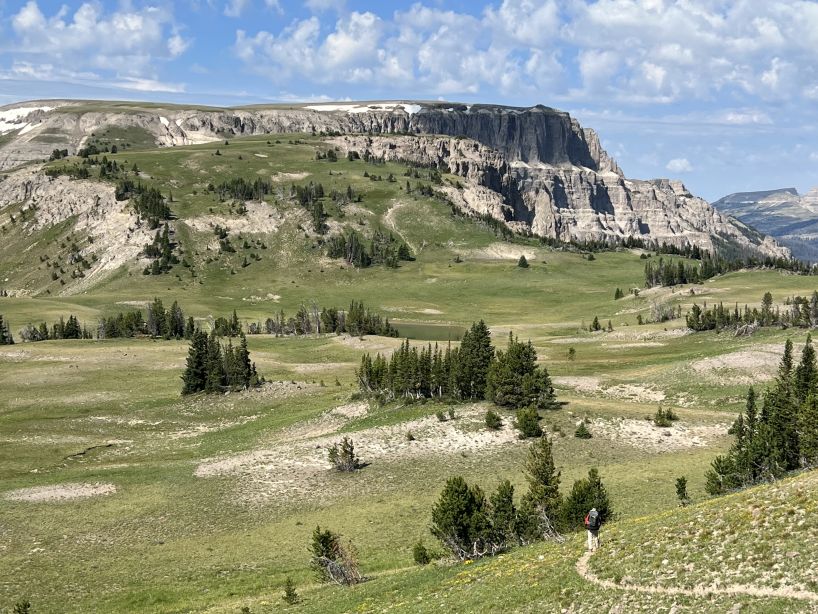 Larry following an actual trail along the Continental Divide​
From there we made a long, occasionally steep descent to a gap and another pond. At that point we had a decision to make. My original plan was to continue on the Continental Divide all the way to Austin Peak for maximum scenery. That would require some steep climbs, and a couple of miles of extra hiking, since we would have to backtrack a considerable distance from the summit to reach Bonneville Pass. The forecast still called for a good chance of severe weather that afternoon, too. Regretfully, we decided that it would be best just to continue the hike out.

I’m not sure that we missed much, because the hike out was glorious. Usually the final day of an extended backpacking trip is a long boring descent in uninspiring forest. This hike was different. With our route, it just kept getting better and better. The final day proved to be a grand climax to an incredible trip. 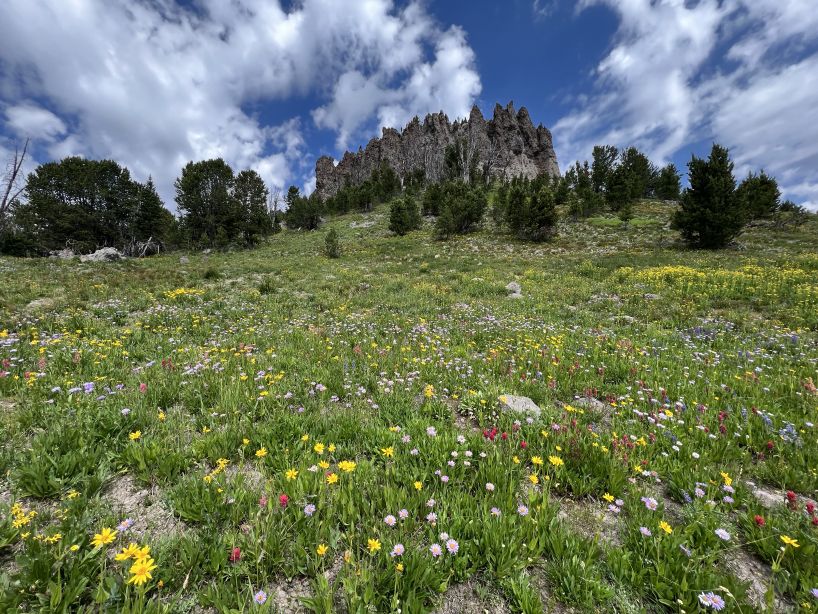 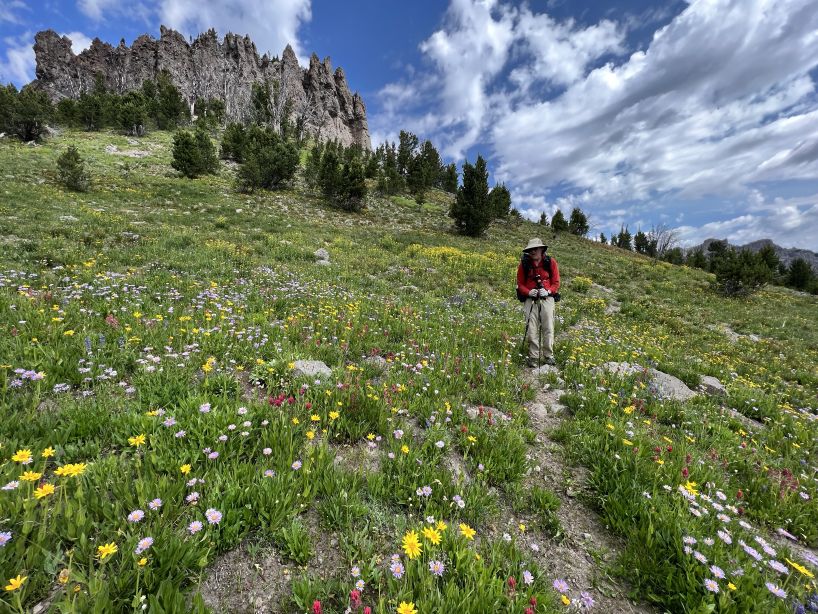 Larry on the descent 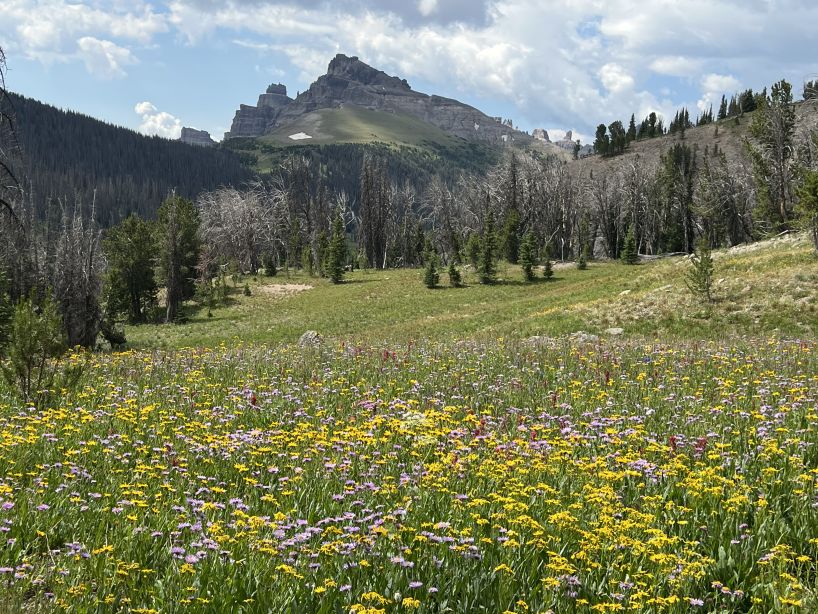 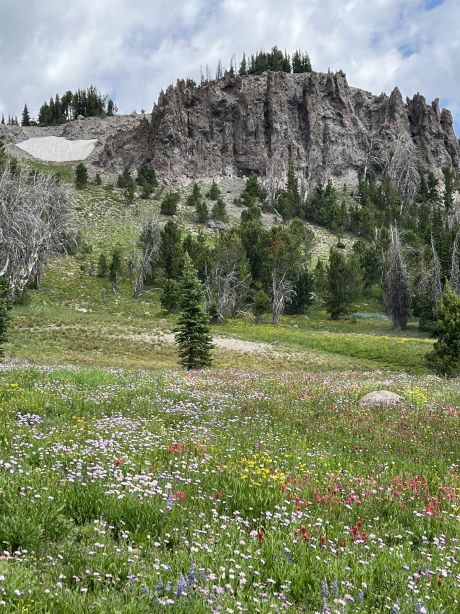 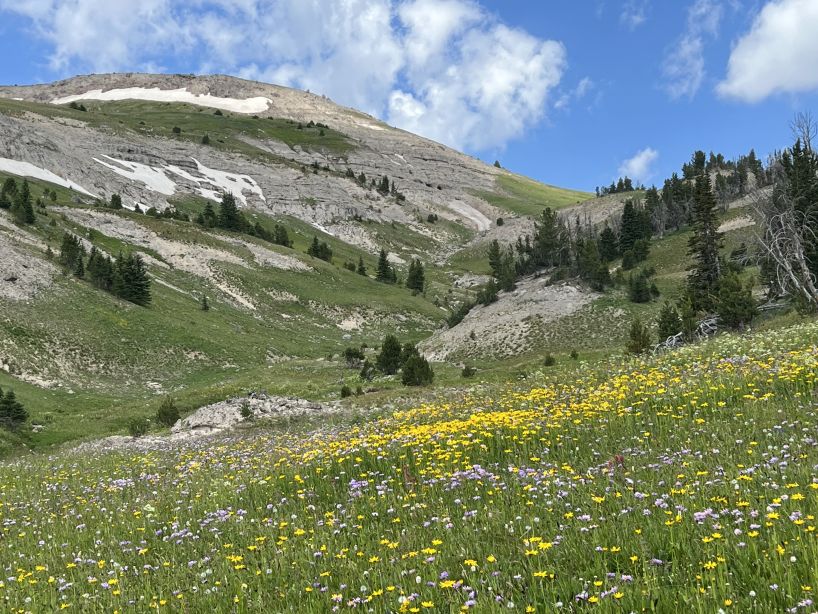 Incredible wildflowers​
From the pond we followed a good trail south. We curved west below a band of cliffs and contoured through a drainage with a small stream. The wildflowers were incredible through here, and the blooms continued to be spectacular all the way to Bonneville Pass. Easy hiking on good trail continued all the way to the final steep descent. The trail went to shit here – it was basically straight down, with lots of loose rocks and scree. We descended carefully, as it would be easy to take a fall along here.

We eventually made it to the base of the cliffs and enjoyed a pleasant stroll to a meadow near the pond at Bonneville Pass. The trail disappears here. This spot has stunning views of towering mountains and rugged cliffs, and every inch of ground was covered with blooming flowers. We took a break there before wandering through the meadow to the outlet stream. We crossed it and picked up the trail, which we followed southwest to the official pass. The meadow on the far side was a carpet of purple and gold flowers. It was a bit damp, but I had to go out there for photos of the flowers and the surrounding peaks. 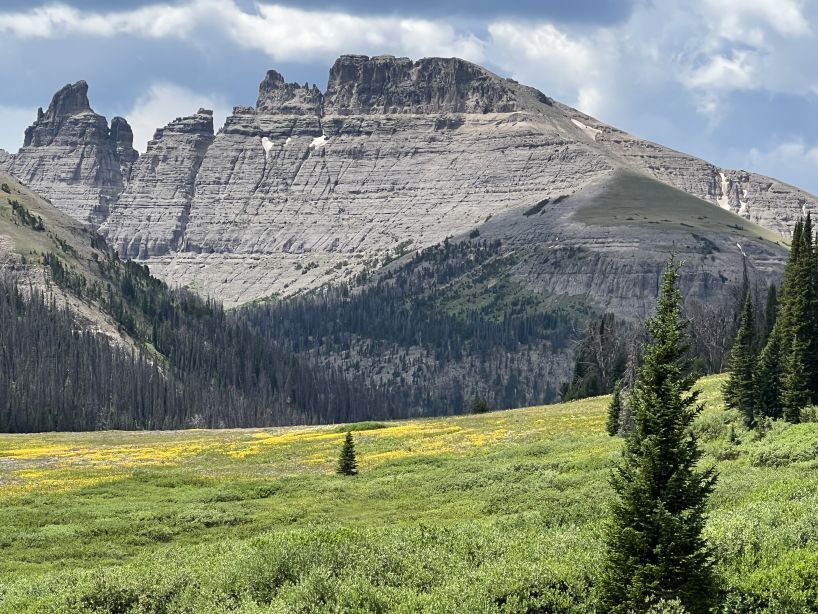 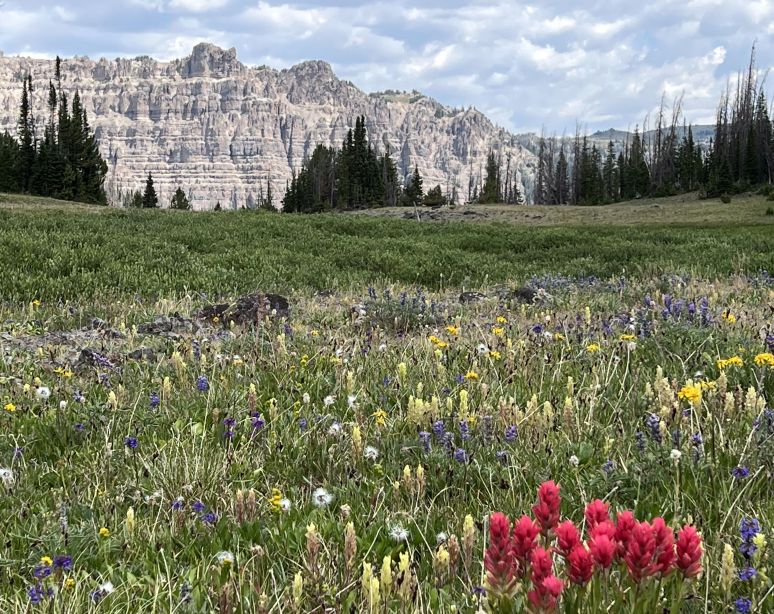 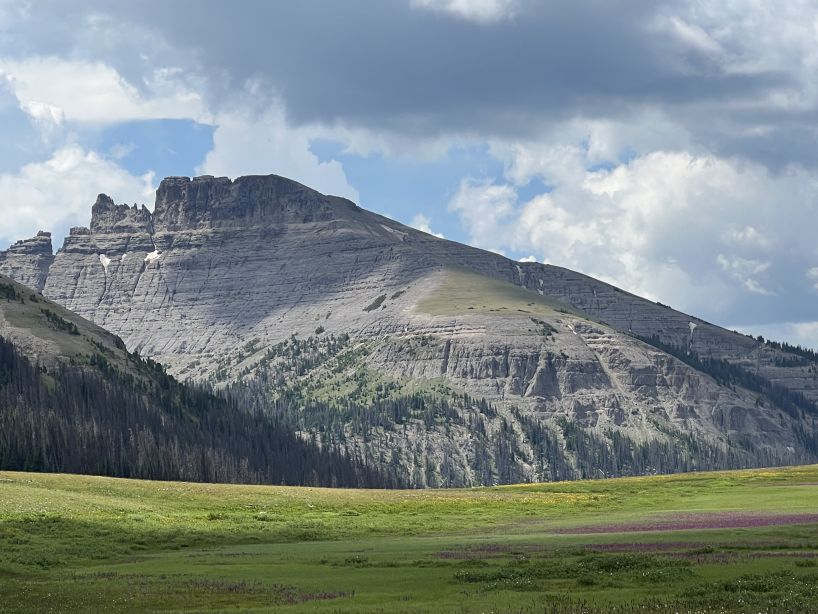 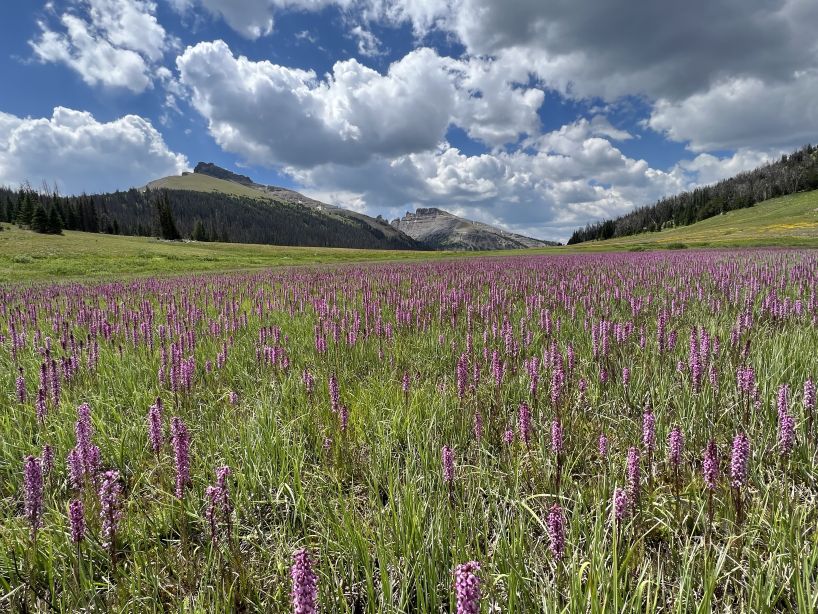 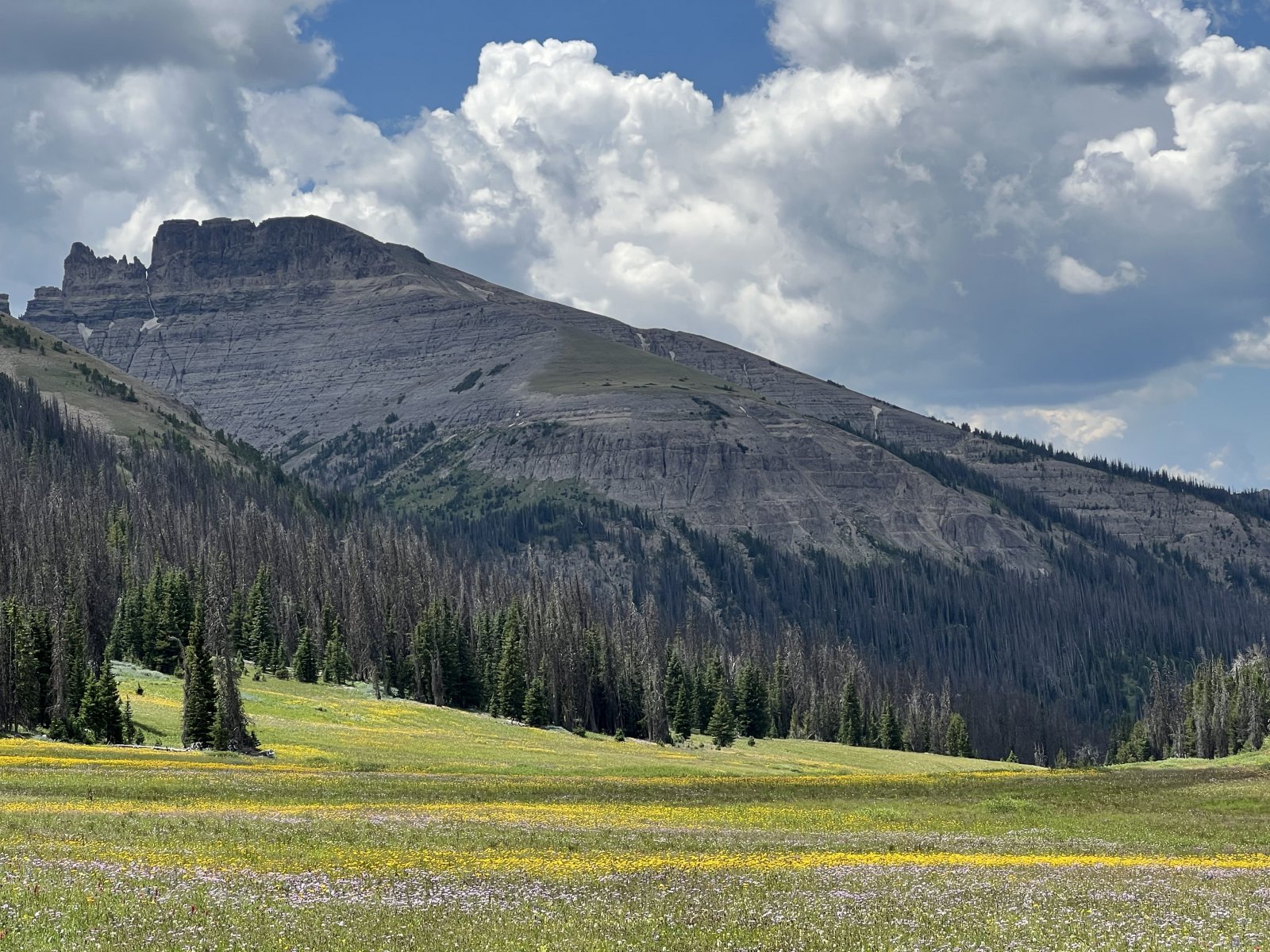 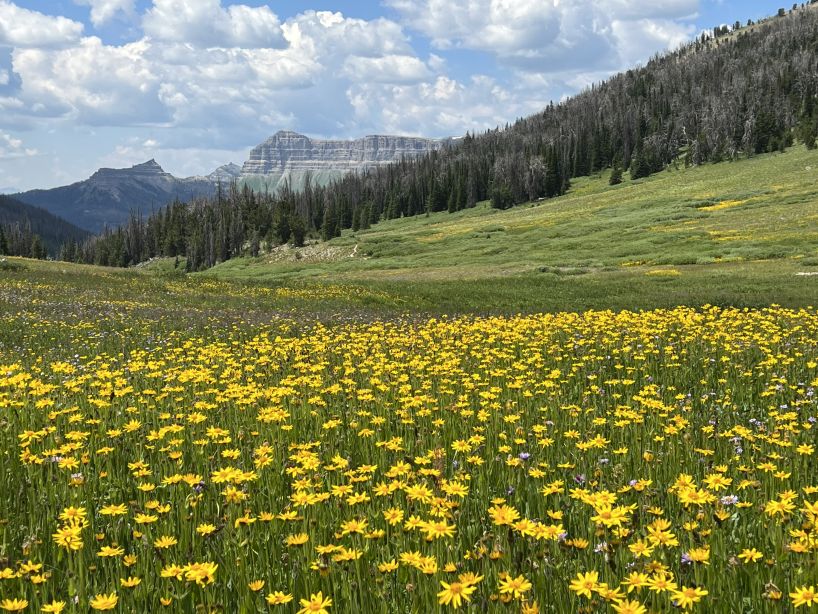 Bonneville Pass​
I eventually pulled myself away and we followed the trail to the far end of the meadow. From there, we gradually descended along Bonneville Creek into scattered forest. A bit later we passed one more great view of the cliffs that form Jules Bowl. A few minutes later we passed a pair of hikers heading towards Bonneville Pass. It was the first people we had seen in five days. 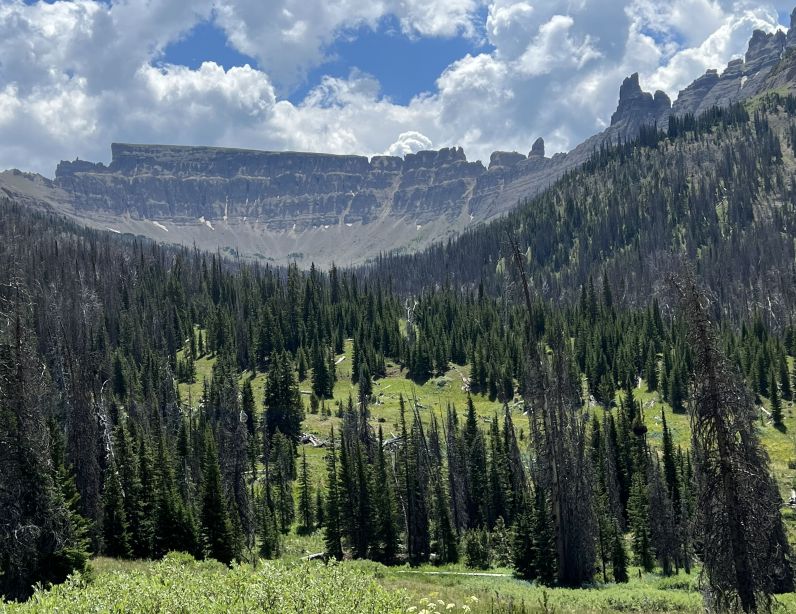 Jules Bowl​
I wasn’t exactly sure how this hike would end. Before we started, we had debated whether to leave our car at Brooks Lake or the end of Forest Road 516. That forest road is sometimes in poor condition, and we just had a regular rental car. Plus, we weren’t sure if we would finish our trip by coming through Bonneville Pass or if we would descend Cub Creek and then hike through Bear Cub Pass and past Upper Brooks Lake. Ultimately, we had decided to leave the car at Brooks Lake. Maps show that the trail from Bonneville Pass forks, with the northern trail continuing west to the valley north of Brooks Lake. From there it joins the CDT. The south fork leads to the end of Forest Road 516. However, when we reached the junction on the map, there was no sign of the northern fork. We stuck with the trail that actually exists and rock hopped Bonneville Creek. Before long we reached the trailhead at the end of Forest Road 516.

From there we hiked out the forest road, which was in good condition. We passed several people at primitive campsites along the road. Then we took a short cut by dropping down from the road and walking through the Pinnacles Campground. We followed the road out of the campground and crossed Brooks Lake Creek on a bridge. Another short road walk brought us to the lodge and on down to the parking area. The rental car was still there, after nearly two weeks. We finished up around mid-afternoon, and although there were lots of building clouds, we had managed to dodge the bad weather.

We didn’t waste any time driving to Dubois. We drove through a huge thunderstorm on the way. It looked like the northern end of the Wind River Range was really getting pounded. Luckily the rain stopped shortly before we reached town. We went straight to Noon Rock Pizza, which had been recommended by my friend Dave. We had a great post-hike meal there. I had 6 wings, a salad, and most of a pizza, along with a couple of beers. Larry binged on Diet Pepsi. The restaurant was pretty quiet at 4pm, but business was starting to pick up as we were leaving. We met a CDT thru hiker on the way out. He was heading north, and asked us about possible routes. I thought about suggesting that he follow the Continental Divide, but I didn’t mention it because of the threatening weather.

One flaw with finishing the trip a day early was not having a hotel reserved. I had a free night booked at the Holiday Inn Express in Lander on Friday night. This was Thursday. We didn’t want to pay for a hotel, and the rain was finished, so we decided to return to Ring Lake. We drove out there from Dubois, and we ended up one campsite over from where we had been the night before we started our trip. We set up camp, and I ate the rest of my pizza for second dinner. We stayed up for a lovely sunset before going to bed early. 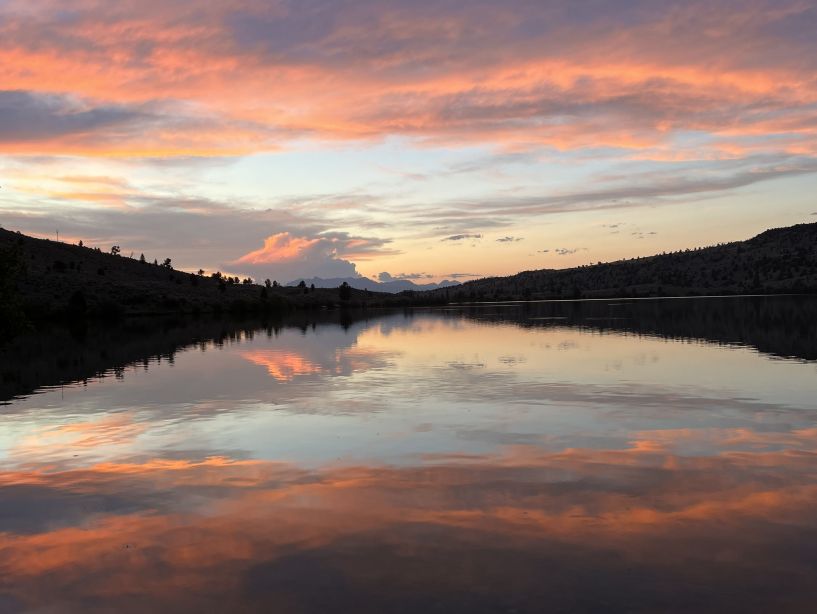 Lol ....... trail you passed does head to Dundee Meadows, fades in and out. It is a real interesting hike that way.... Scat and I did that last year. Our route is in red. There is a trail up high, approx the way you went, it is in yellow nd it is about 1.8m shorter. 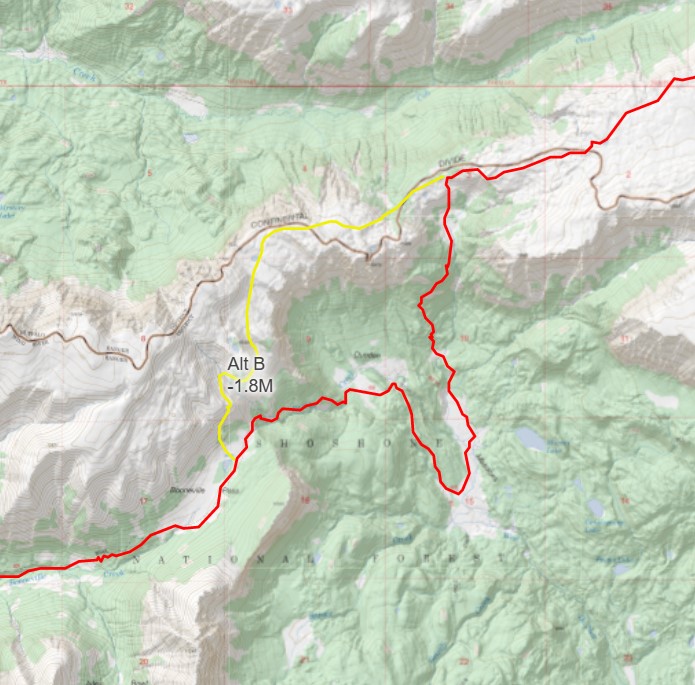 Bob said:
Lol ....... trail you passed does head to Dundee Meadows, fades in and out. It is a real interesting hike that way.... Scat and I did that last year. Our route is in red. There is a trail up high, approx the way you went, it is in yellow nd it is about 1.8m shorter.
View attachment 118021
Click to expand...

Thanks, that is great to know! Yeah, your yellow line is pretty close to what we did. The south end matches up exactly. That looks like a really nice loop from Bonneville Pass.

Wow. Quite a trip report/adventure! Thank you for sharing. Your photos are great too.
F

kwc said:
Wow. Quite a trip report/adventure! Thank you for sharing. Your photos are great too.
Click to expand...

Love those flower meadows!
https://steveriggs.smugmug.com
You must log in or register to reply here.
Similar threads