Greetings one and all, and welcome to the Great Colorado Expedition of 2012 trip report series, Part 1: Medano Pass and Great Sand Dunes National Park.

(Later installments will include the Alpine Loop near Ouray; two transits of Black Bear Pass; Poughkeepsie Gulch on the Ouray Jeep Jamboree; Yankee Boy and Governor Basin with the Jamboree; Owl Creek Pass to Carbondale; Crystal Mill, Devil's Punchbowl and Schofield Pass; Maroon Bells and trails in Aspen; and Mosquito Pass, Webster Pass and a truncated trip to Red Cone.)

Plans are in the works for a reality show, "Those Wacky Liberteers", and a game show, "Name That Dent".

Without further ado, I give you Part 1 of the Great Colorado Expedition of 2012. 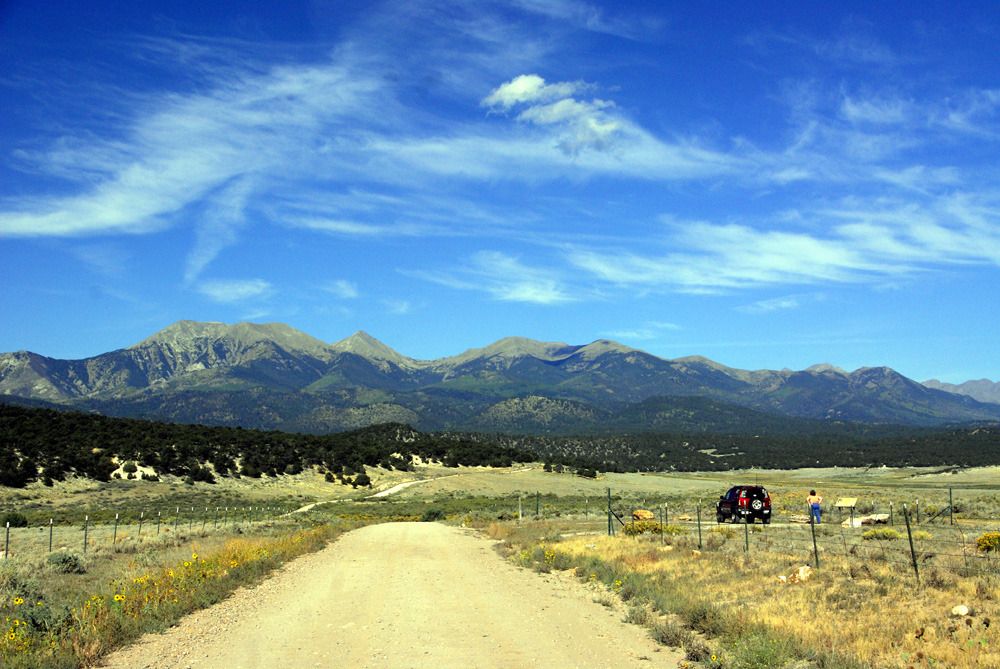 After driving for two days from Ohio to Colorado (including what seemed like three days getting across Kansas), we set out from scenic Walsenburg, Colorado, for Great Sand Dunes National Park via Medano Pass. This is the turnoff near the paranoid buffalo rancher's property (many large, professionally-made signs..."PRIVATE PROPERTY...STAY ON THE ROAD...SECURITY CAMERAS ARE WATCHING...I SAW YOU PEE BEHIND THAT ROCK...") Apparently he has a problem with poachers. 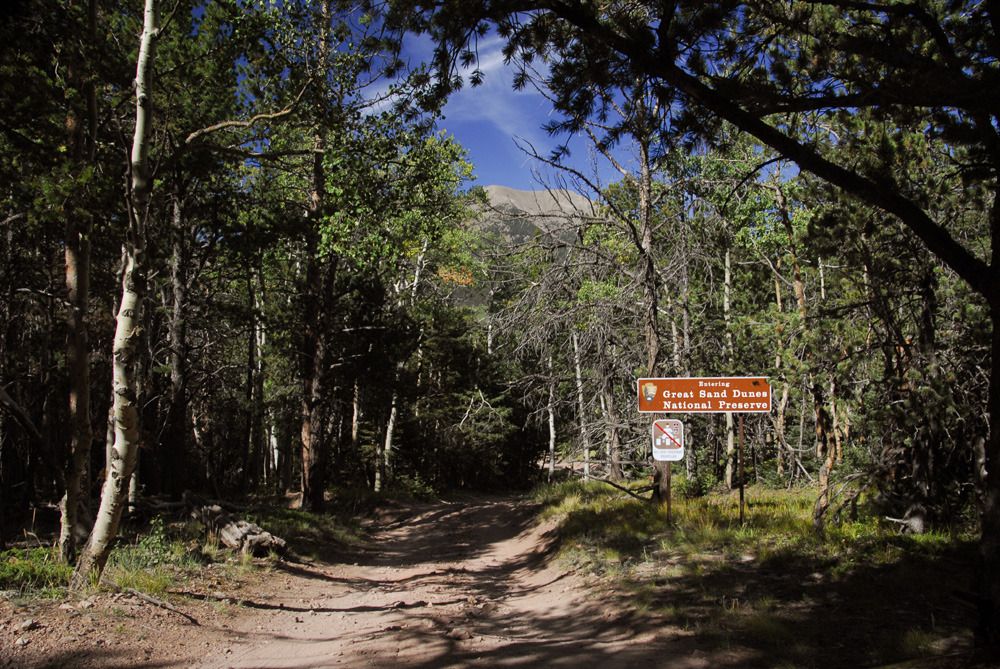 The drive up through the forest was fairly uneventful...no such drama like JeepNCrowd had. This is at the top of the pass itself, as we're about to enter the National Preserve part of Great Sand Dunes (just barely visible through the trees). 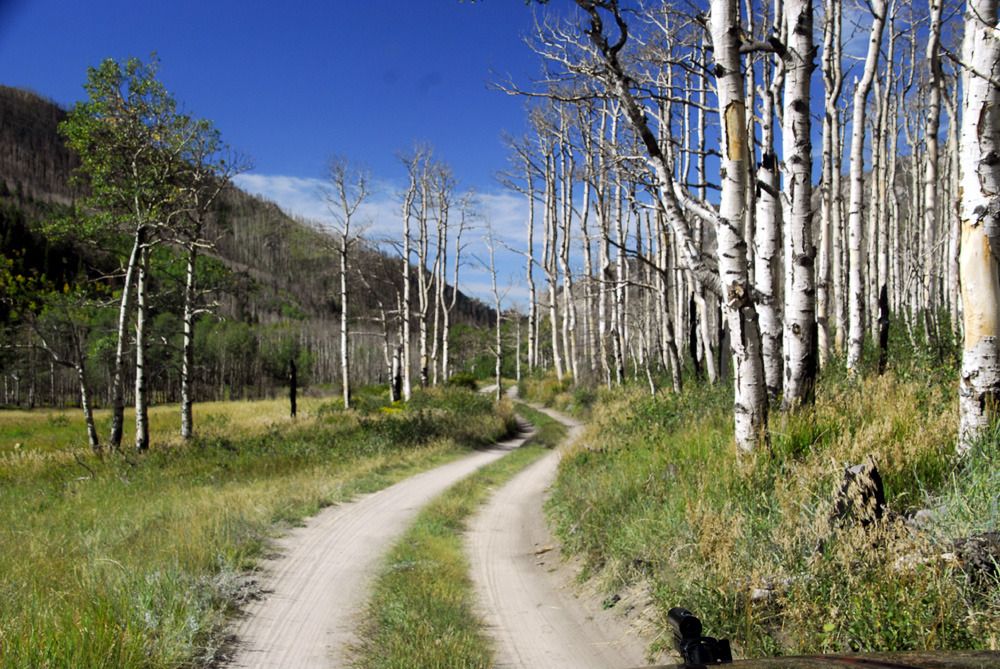 On the other side of the Sangre de Christo range, we passed through a large grove of dead aspen... 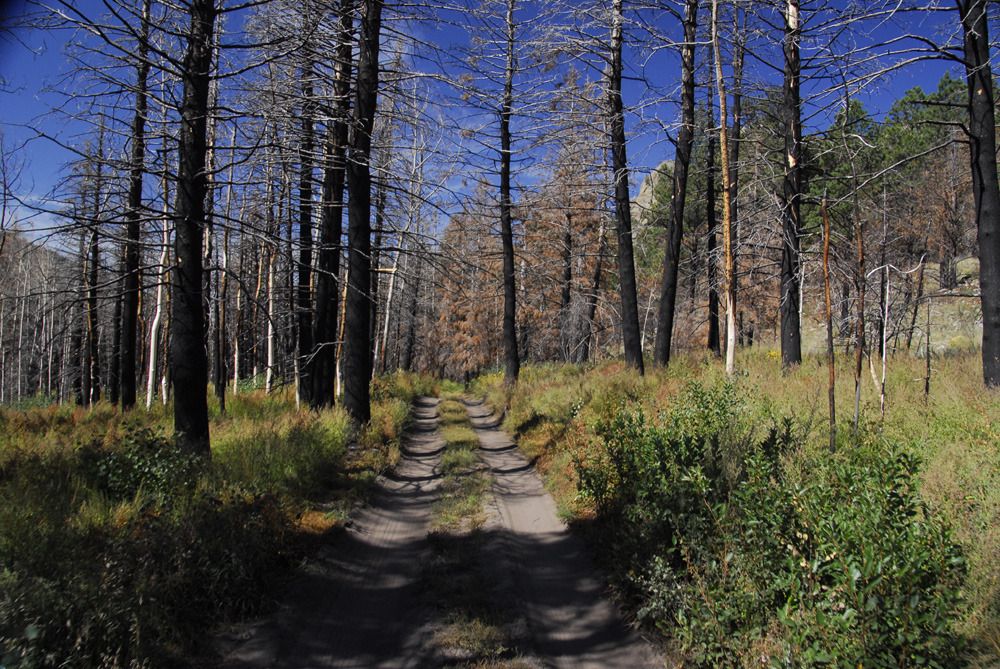 ...followed by a large grove of dead, burned aspen. The rangers later told us that the fires were about three years earlier. 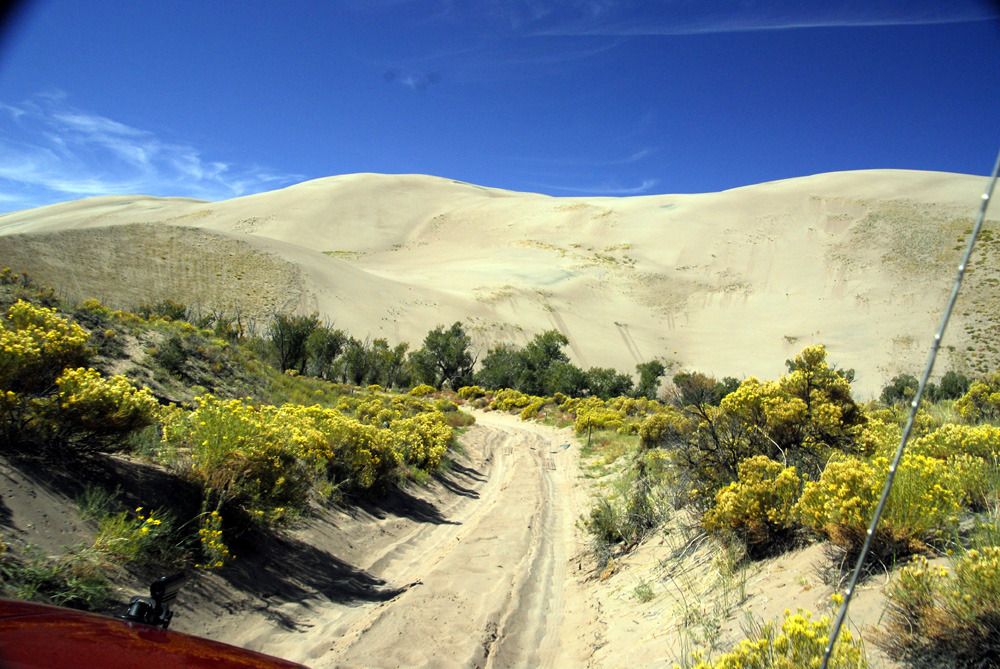 Once at the bottom of Medano Creek, the dunes loom into view. The dunes are up to 800' high in places, and the Park Service really frowns on people driving on them. The sand along the trail was pretty deep, but aired down to 25 we had no problem. 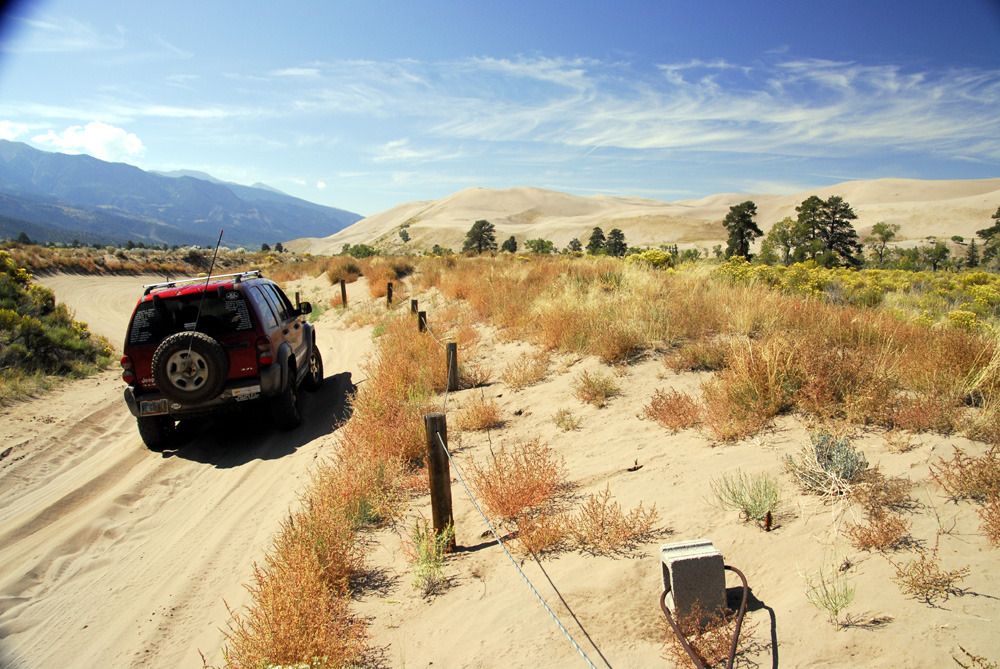 Our Libby along the sandy portion of the trail, approaching the Visitor Center. 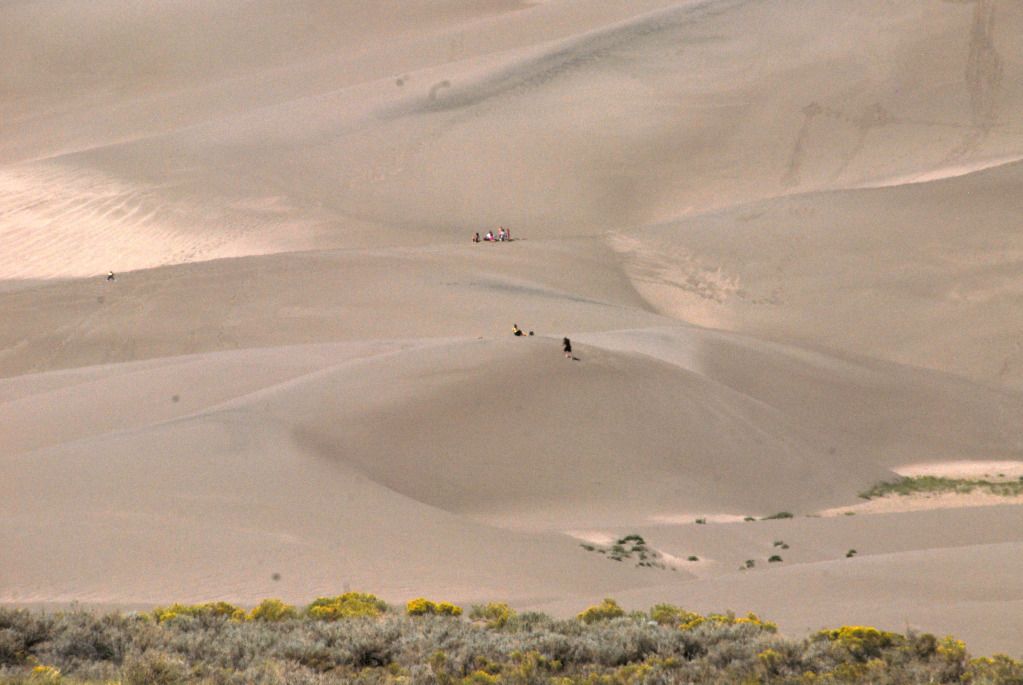 It's about a half mile hike out to the dunes from the Visitor Center. In my younger days, I had hiked up the dunes and rolled down them with glee (I also had sand in every crevice of my body for weeks later.) I've also found that sand and DSLR cameras do not mix well. We stayed in the Visitor Center. 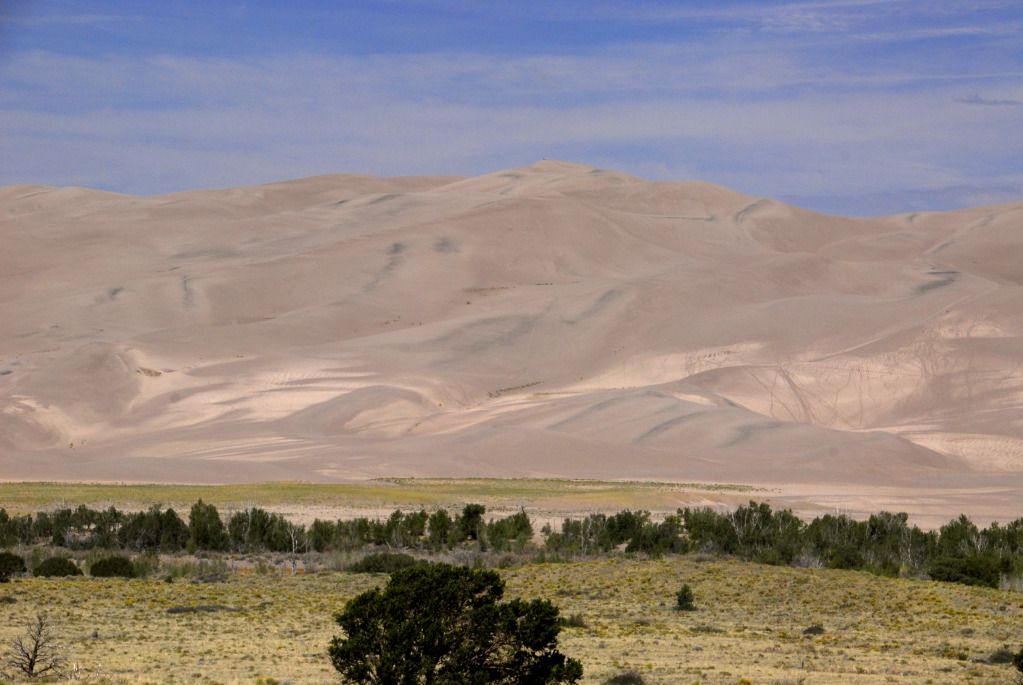 If you look reeeeal close, you might be able to see the pixel that represents the group that hiked out to the tallest dune. 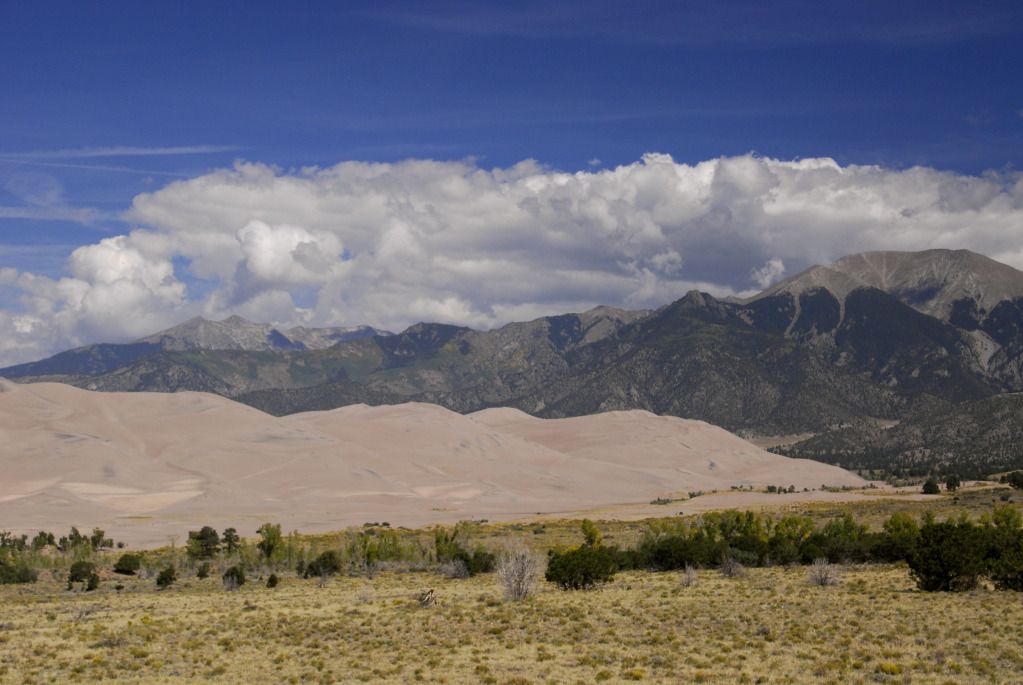 Departing the dunes and headed for Alamosa for lunch and Durango for dinner. We had called ahead to the Best Western in Ouray and got our room a day early, so we headed there along winding US 550 in the dark (not much of a problem, except for the random deer that wandered into the road along the way.) 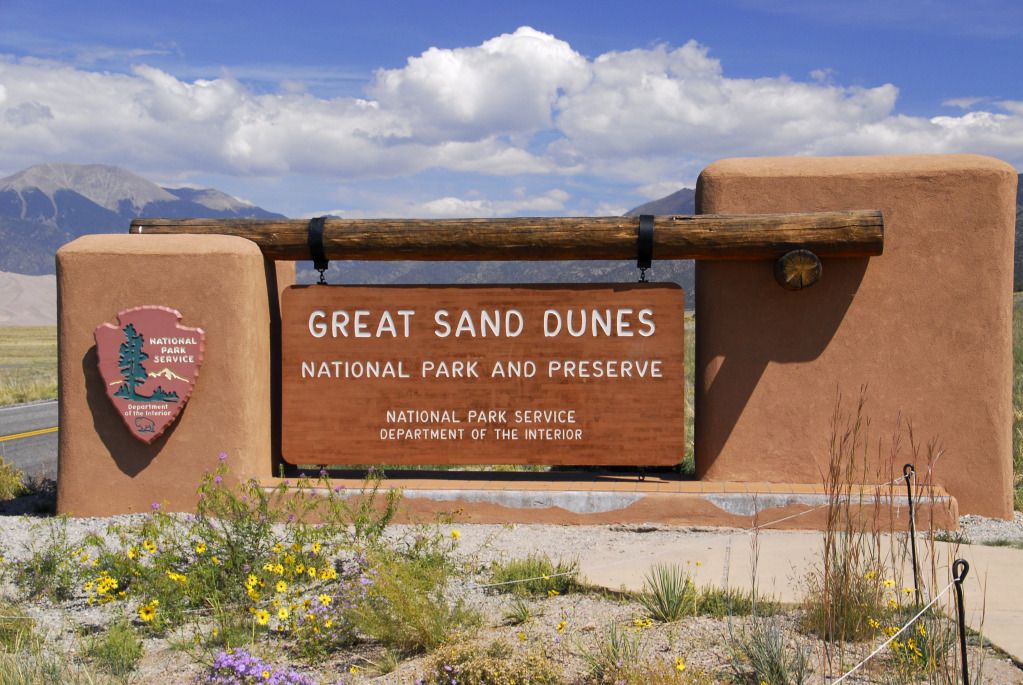 Next up, Part 2: The Alpine Loop (Ouray to Lake City via Engineer Pass, returning to Ouray via Cinnamon, California, Hurricane and Corkscrew Passes)...stay tuned as the intrepid Liberteers find the aspens in full color, have lunch at a cannibal grill, and make a field repair at 12,000 feet.

Howdy Ranger Joe! I just added quick navigation links to the top and bottom of each part of your trip, like this:

I'm really looking forward to reading through them all! Thanks for sharing!
IG: @backcountrypost

You shoulda gone out on the dunes! It was way windy the day I was there we were literally sandblasted off the dunes.

Zapata Falls is just a few miles down the road and is definitely worth the short hike to see it.
www.simpleweekends.com
You must log in or register to reply here.
Similar threads