(Note: this is a post my wife made on our outdoor blog about a trip she and her sister (pinecone) did).

April and I used to belt out that Tom Petty line on various road trips from Provo to Missoula when my parents were still living there. I really think it's been that long since we took a road trip together sans children.

We planned a trip to Zion National Park for a quick weekend getaway. April had been once years ago and though I'd been a number of times, I'd primarily seen the main tourist circuits at the southern end of the park, aside from my Kolob Arch hike a few years ago. So we settled on hiking the West Rim trail from Lava point, a 13 mile trail that meets up with the Angel's Landing trial at the saddle. We'd drop our packs to summit Angel's Landing and then explore some of the shorter trails.

I'd honestly been kind of burnt out on Zion having gone a few years in a row at the end of football season. The whole idea was usually that it would be a warm getaway, but late November isn't really that much warmer in St. George area than it is in Salt Lake. Warmer, but not significantly so to base a vacation around warm weather. This time was different though and I credit that to the awesome hike and it being earlier in the year so all of the greenery was still abundant. That being said, we were subject to hiking in over 100-degree weather on day 2.

We started out on Friday, September 11 driving down to the south visitor's center park and getting our backcountry passes. We met up with Tyler who was doing some work in St. George for the day and willing to be our shuttle driver to the trailhead. He dropped us off around 3:30-4 pm and we got started. 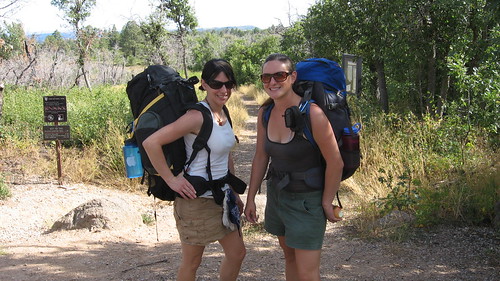 It was an easy 4 miles to our campsite that night, and I wasn't expecting much as far as scenery until we got further along the trail but I've attached samples below of what we saw that first day, I was pleasantly surprised: 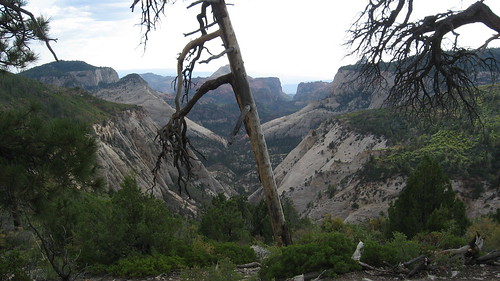 Tree graveyard in the meadow 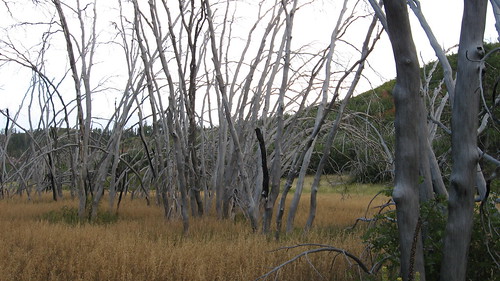 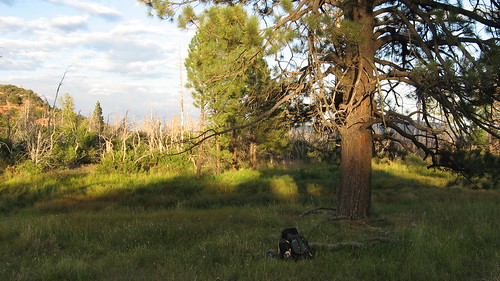 There we stayed our first night. The spring was not very promising, more like a little mud hole, and we only filtered 1 bottle of water, knowing we had enough to get by until we met Rim Springs the next day. But I really thought it was the best campsite after seeing all of the other sites along the trail. A friendly deer nibbled on grasses the whole time April and I were eating our dinner. We went to bed just as it got dark because it was much cooler up there than we had anticipated, but more deer joined our friendly one and we both heard them about the campsite for a long while before falling asleep.

We woke early and got on the trail just after having some instant oatmeal. It was less than a mile before we starting seeing more spectacular views. And what surprised me was that I knew these canyons we were seeing were not the main Zion canyon, but numerous ones mostly unexplored, or more accurately probably too remote and inaccessible to see much traffic. I was overwhelmed thinking of all of the space and curious features of the land that I never knew about and that so few people actually see. There's so much more than I ever imagined to Zion National Park and Utah in general.

I really like the juxtaposition of the greenery on the one side and the rock walls on the other. 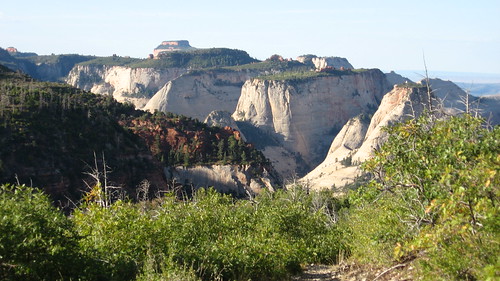 Here's a picture of Rim springs, looking cleaner than Potato Hollow springs did and by that time it was getting pretty warm out. We filtered a couple of bottles. 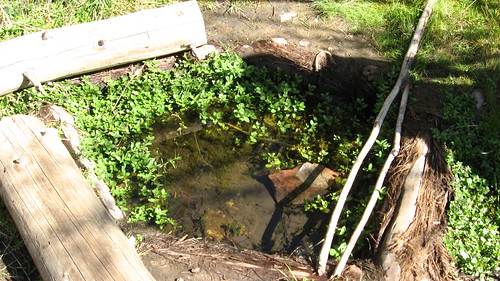 We actually came down quite a bit from the rim so that we could get on top of a different outcropping of rock. I didn't expect as much up and down as there was along the trail which would explain why I was sore a few days afterward. 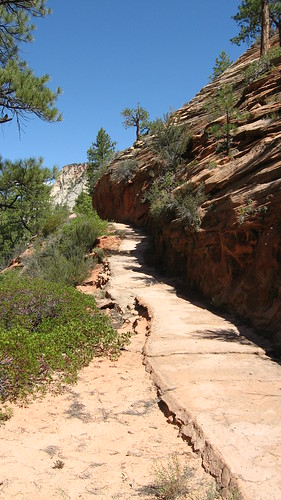 Our first view of Angel's Landing: If you're not familiar with Zion National Park it's the spiny rock in the foreground, it has chains to hang on to as you hike up onto the top part that flattens out. 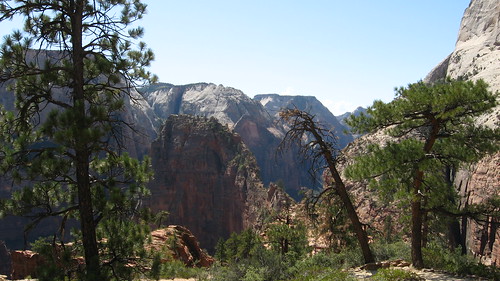 Closer up on Angel's Landing, another contributing factor to the soreness in my legs in the days following this hike, thought my running and stairmaster sessions would have nipped this in the bud. Other peaks haven't made me so sore, but again, probably it was the up and down with a pack that did it. 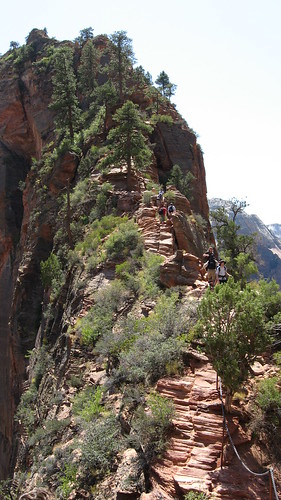 View looking up the canyon from atop Angel's Landing

Once we were headed down from Angel's Landing we knew we were home free. Just a couple more miles all downhill and we could take off our packs, get a cold drink and relax in the Virgin River for a while before setting up camp at the Watchmen campground. 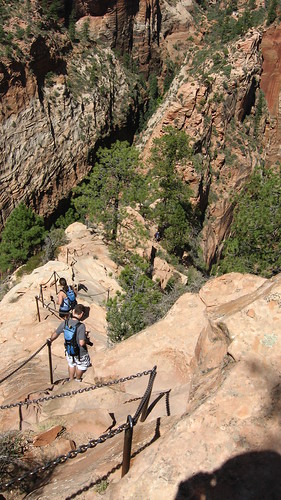 Or that was the plan anyway until we accidentally stumbled upon the sweetest swimming hole ever while driving through the old tunnel. I can't say exactly where this $%#@&@# GEM OF A WATERHOLE is, because I'm going to treasure that information from this day out, but let me just show you how sweet it was: 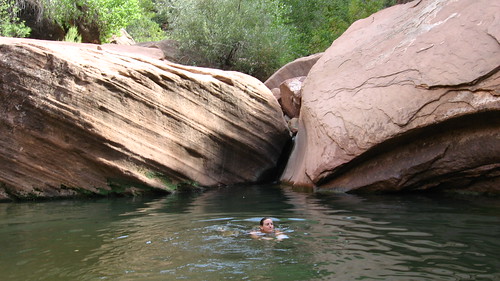 Yes, that's right, we had it to ourselves after just a few minutes. The rock at the back was perfect for jumping off of, not high, but just enough to be tons of fun. Needless to say, it was absolutely refreshing and a complete surprise considering the number of times I've been to Zion and not known this pool was there.

So we abandoned other plans of getting in the Virgin river that day, set up camp and did the easy Riverside walk to the entrance of the Narrows. Beautiful. Yes, I forgot how beautiful that simple little paved trail is when all the plants are in their prime. Lush and beautiful.

Day 3 I woke up a bit sore and anxious to get back to my baby girl. But I knew the Emerald Pools was a short trail that give us a chance to stretch before sitting in the car for 5 hours.

We hit the trail at a perfect time in my opinion, early enough that it wasn't yet too crowded or very hot. We did the whole thing, adding the upper and middle pools, still just getting in over 2.5 miles.

A peaceful morning at Zion 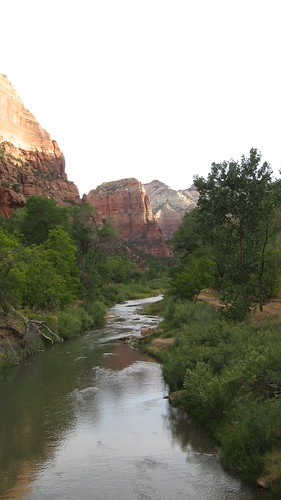 The Middle Emerald pool is just behind me in the picture, but I like the view with all of the greenery this way the best. 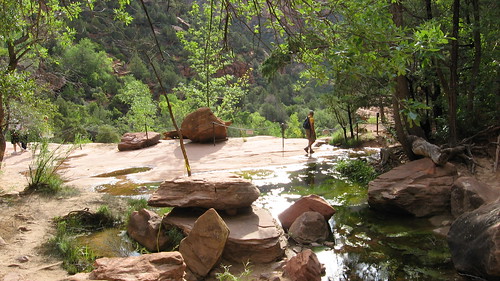 And of course when April and I found this bit of machinery we knew her boys would love to see it: 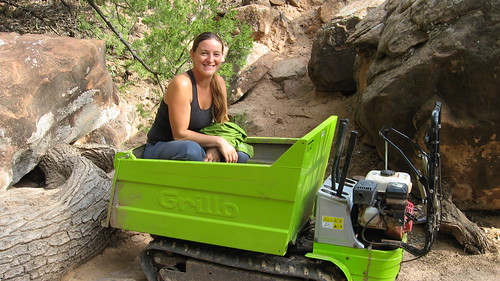 In my opinion, the Emerald pools is definitely a hike worth taking. I've done it a number of times and it honestly delivers on being short and sweet. 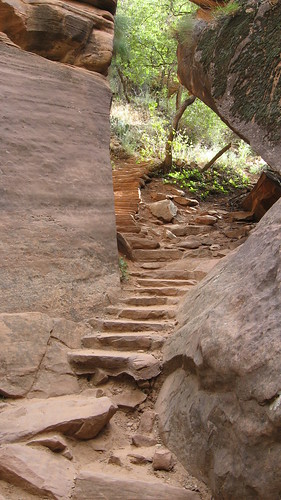 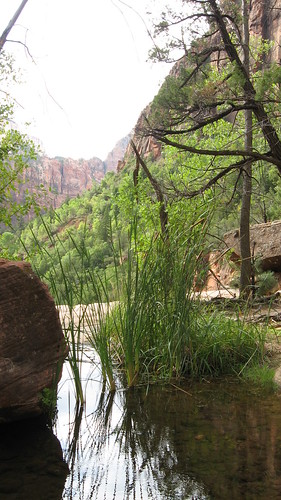 I already can't wait for a new adventure with April next year!
"This is where my favorite quote will go someday" - Tyler

Looks awesome. pinecone, I might have to hit you up for that swimming hole location here in a couple months.

I was going to say something about you tempting ibenick with a challenge to find your swimming hole, but I see he's already on the case! LOL!

I know where it is, but out of respect I'll keep my trap shut. Great report by the way!
http://www.lisakellyphotos.com/ 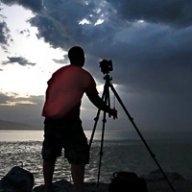 Nice trip, and I will see you all there at that swimming hole later this year. I think I know where it is from but not sure where I heard it from.
https://instagram.com/wesleyaston/
Facebook Fan Page
www.wesleyaston.com

Since its my wife's TR, I won't post the pool info here, but I'd be happy to respond to a PM. It's actually pretty easy to find.
"This is where my favorite quote will go someday" - Tyler 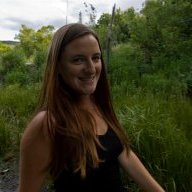 that was an awesome trip and I think we were at sight 8? it was about 5 miles in, the site right at potato hollow spring, the swimming hole is not hard to find at all we were just both unaware of it previous to this trip and it made our day after doing angels landing in 90 plus degrees!
You must log in or register to reply here.