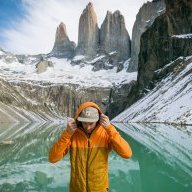 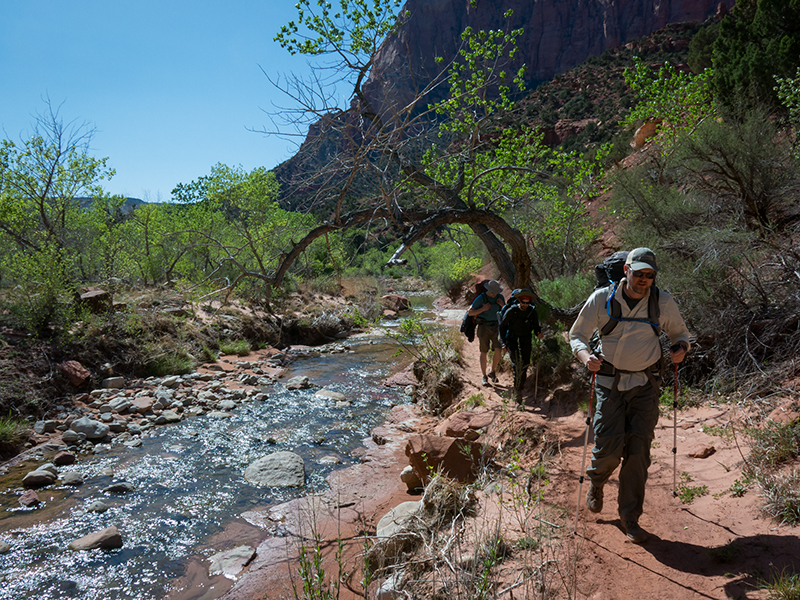 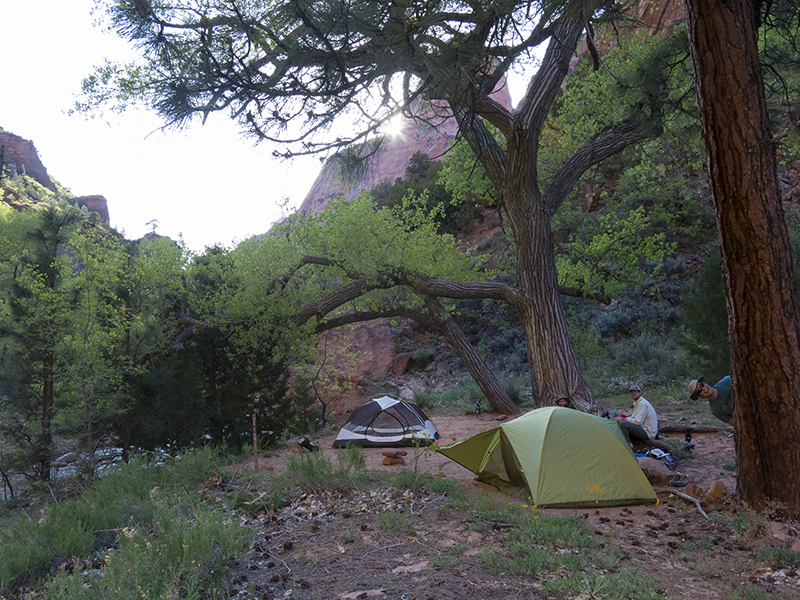 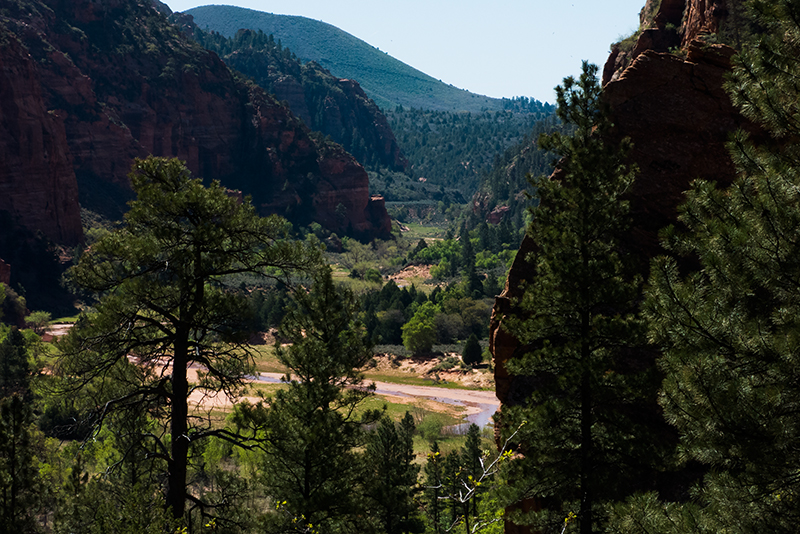 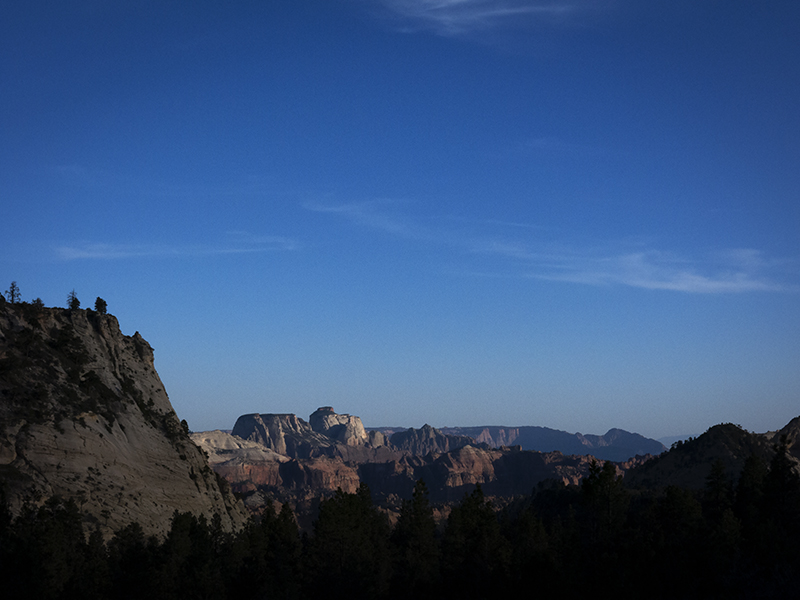 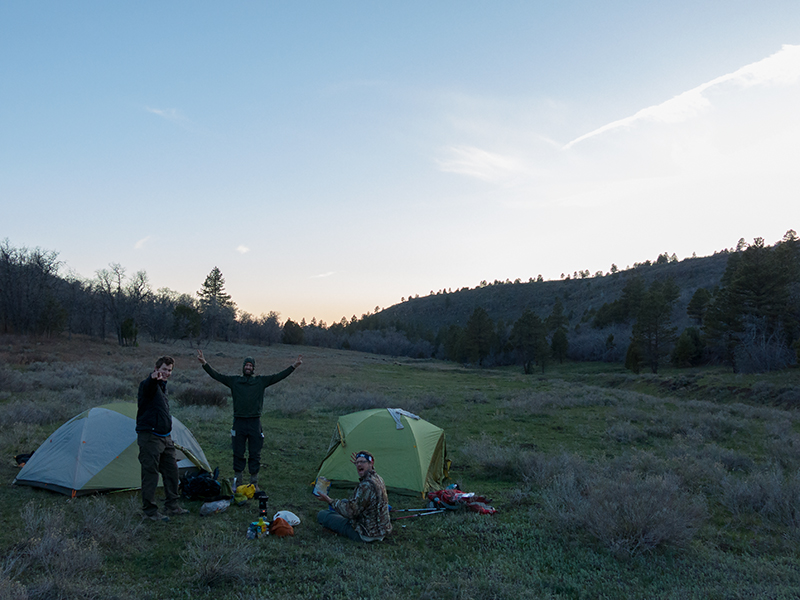 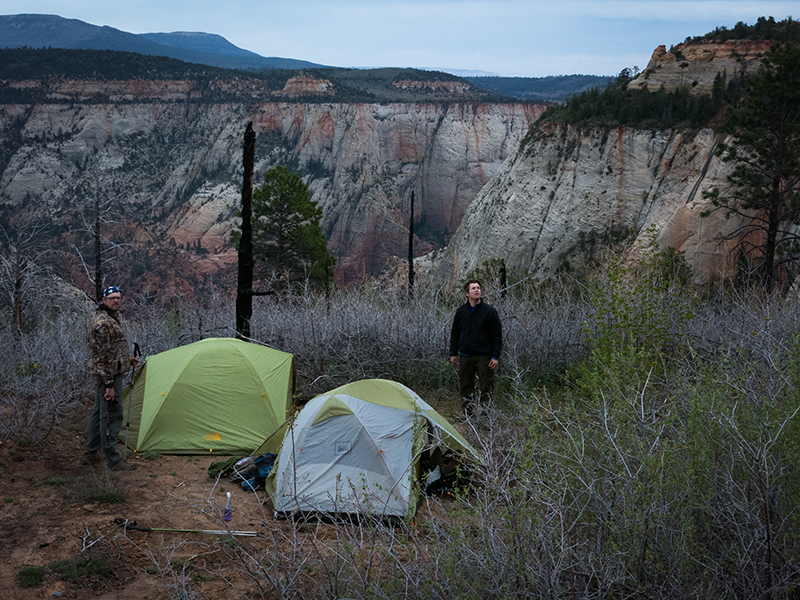 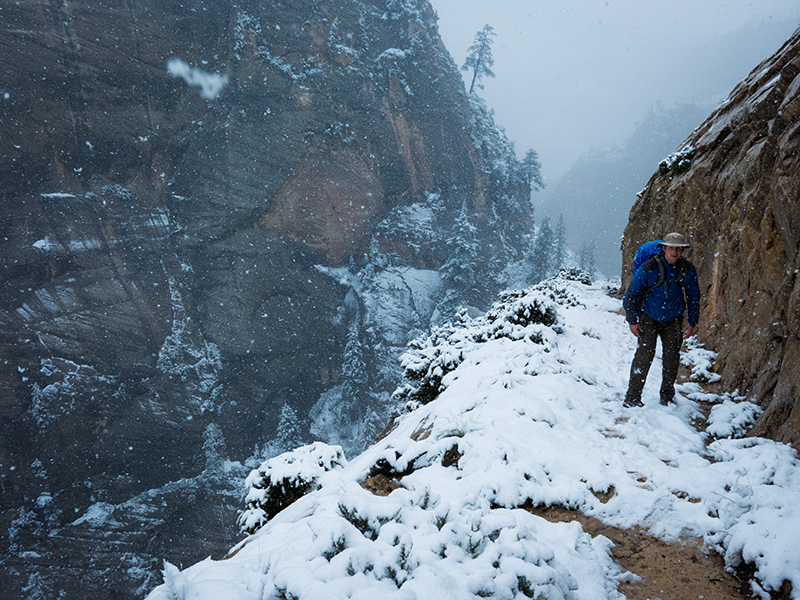 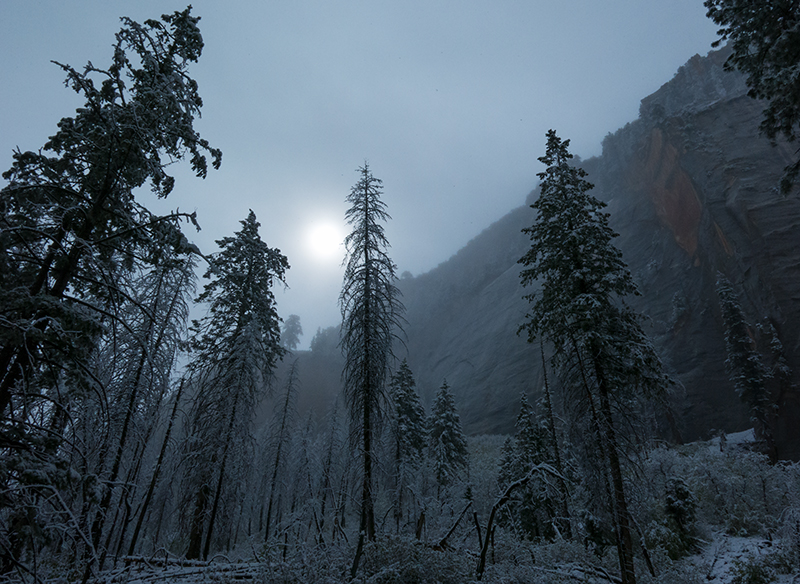 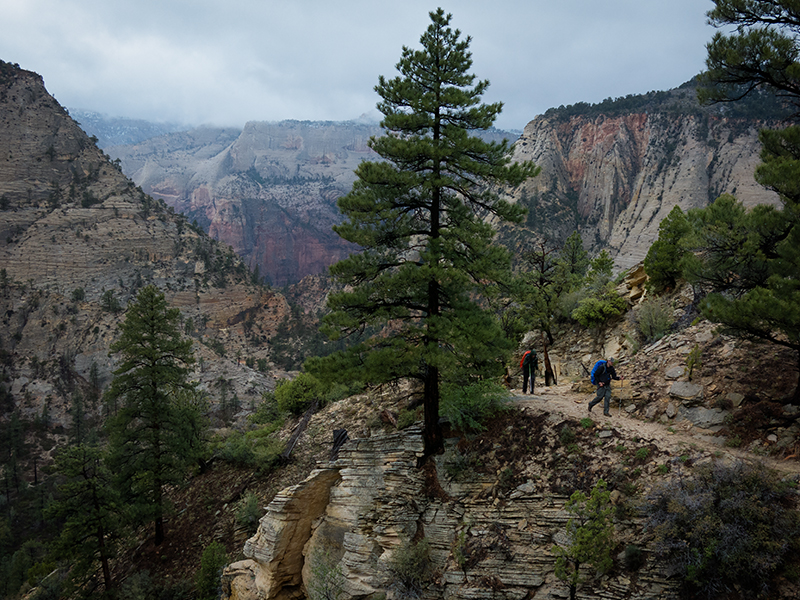 After having our plans cancelled last year because of the government lockdown, my brother and I with a couple of friends managed to book permits for the Zion traverse for late April and this time it was a go! Starting Wednesday, April 23 in Kolob Canyon we planned to finish at the east entrance of the park on Sunday morning. However things would soon change.

Night one was La Verkin Creek camp 11 just past the intersection for Hop Valley after a quick detour to Kolob Arch. This was my first time into that area and it was love at first sight, (there are now plans brewing for a return trip to camp at #11, one of the best camp spots I've ever had, to just explore further up canyon and back into Hop Valley again).

After pumping water from the creek the next morning, (we expected a long, dry day), we climbed the steeper-than-expected hill over into Hop Valley but were rewarded with that stunning view from the top. What a lovely hidden gem that place is, despite the cow-polluted water.

It was a bit of a sandy slog through the valley but the views made it all worth while. Then up the long and steady climb out at the south end before we took a lunch rest beneath a tree close to the trailhead.

Here we declined an offer for a ride to Wildcat Canyon and continued on the 4-5 miles of connector trail, stopping once we arrived in the Wildcat area to look for a marked spring with no luck, (we'd been told in the ranger station that most were not running due to the dry winter).

We pushed as far into Wildcat as we could before dark, (to shorten a long day on Friday), and made camp in a nice clearing as the sun set. The next morning we were up early and on the trail where, soon after, we found a wonderfully clear spring flowing from a rock where we happily filled up.

At Lava Point were my folks who brought a resupply of food, clothing and a change of footwear for me, (as I was suffering with bad blisters on day one from newer shoes). They also brought a change in the weather report saying that we'd be greeted by high winds on the West Rim and a 80% chance of rain and snow that night.

And the wind did blow, blasting us from the south west as we walked the rim, dark clouds gathering overhead. Upon arriving at our camp, #4, we took a vote and decided to descend lower to the shelter of the area of camps 1 and 2. By 3am it was raining steadily and by 5am it turned to heavy snow.

I was a little nervous about the next couple of miles of trial cut into the cliff below us, but as the weather wasn't showing any sign of letting up, we packed up our soggy tents and pushed on. The rocky trail was covered with snow, slush and running water and my replacement footwear, being my older, worn out hiking shoes, offered little traction on the treacherous trail. I'm not exaggerating when I say my trekking poles saved my life a few times that morning.

As we leveled out several hundred feet below our last camp I gave a sigh of relief and we moved on through constant snow and rain to Scout Lookout. Come noon at the Grotto we were once again met by our support team, my parents, and there decided to push on and finish that night. Better that than spending a damp night in similar, cold weather on the East Rim.

So we unloaded some of our gear with my folks, walked the two miles or so up the paved road to the Weeping Wall trailhead and started up to Echo Canyon. At first we enjoyed a little warmth as the sun broke through the clouds, but above Echo Canyon we were once again hiking in the wind and snow. In the end we made much better time than I expected, despite being slowed by heavy mud that weighed down our feet with each step across the top of the East Rim.

Thankfully we didn't have to find our way out in the dark as we finished at the east entrance by 7:20pm. Then onto Springdale for Mexican food and a warm hotel bed in Hurricane.

It was a wonderful farewell trip to Utah as my wife and I are leaving to travel the world for a year on May 26! Not sure how much backpacking we'll get in abroad, but I'm sure little will compare to this last trip in one of my favorite places, (despite blistered toes). Please follow along with our travels as we share stories and photographs at www.OneWorldOneYear.com, on Instagram, Twitter @OneWorldOneYear and on Facebook. 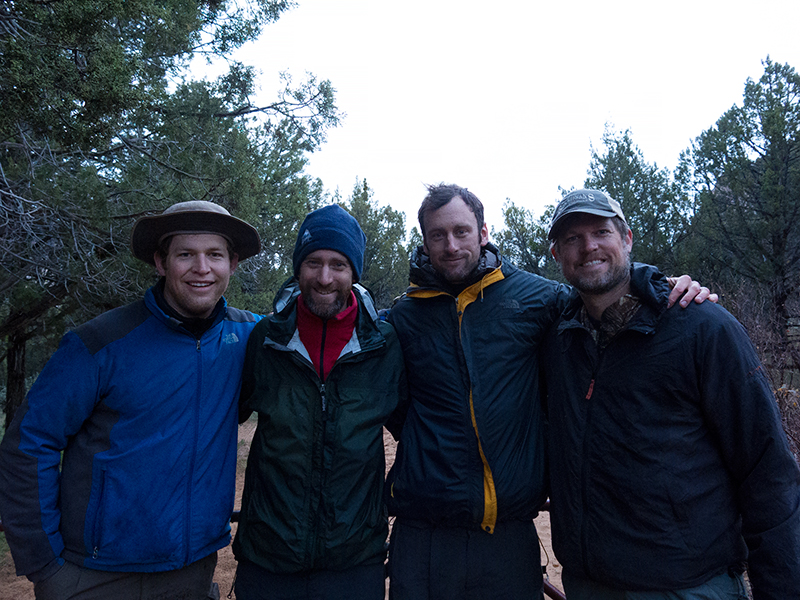 Wow! Epic traverse! That descent was a bit scary on a warm, sunny day. Mind blowing that you guys did it in those kind of conditions. Well done. And go support team!

I'm jealous of you and Britney and your year of travel. Best of luck out there, may the light be with you. Looking forward to following along through your posts.
IG: @backcountrypost

Wow. When I saw the lead shot I thought I was in National Geographic. And here I am bitching and moaning because I had to climb steep sandy hills in the sun- I feel like such a lightweight! That was one epic adventure and like Nick I wish you the best of luck on your upcoming trip and I can't wait to follow along.

Awesome TR. We were in Hop Valley last weekend, and it only made me want to complete this traverse even sooner. Have a blast with your travels in the next year, that sounds like so much fun.

I just saw your website, and your wife (I assume) has done an incredible job building that site. I'll definitely be following along as you guys go on your adventures. If we don't have kids in the next few years, we plan on doing something similar.

Thanks all, and thanks Nick for helping us meet new friends and get out there more with BC post. We'll be sure to log back in when we return!

Great report! By now I've completed most of the Zion Traverse in sections, but it really would be an incredible journey to do the whole thing in one trip. Kudos to you guys and your support team for making it happen despite the adverse conditions!
http://www.lisakellyphotos.com/

i did almost the exact same trip a month earlier, right down to camping at #11 at la verkin creek, and then wildcat canyon. only difference was we went all the way to the east rim our third night, and then got snowed on the next day in stead. it didn't last for us though, and we eventually hiked back down to zion canyon where we got picked up.
i love this site

That is epic. Thanks for sharing.
You must log in or register to reply here.
Similar threads