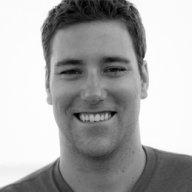 Stuck In the Suburban Wasteland

I had posted over in the trip ideas forum because our annual 'guys trip' was coming up, and we knew we wanted to get into southern Utah, maybe hit some slot canyons, maybe do something else, we didnt really know. We knew of Zion, but the most interesting trip for us there was the overnight doing the Narrows, but we were hoping for something longer. In the end, we figured we would just go for it, and with a basic outline of a plan, we headed out. 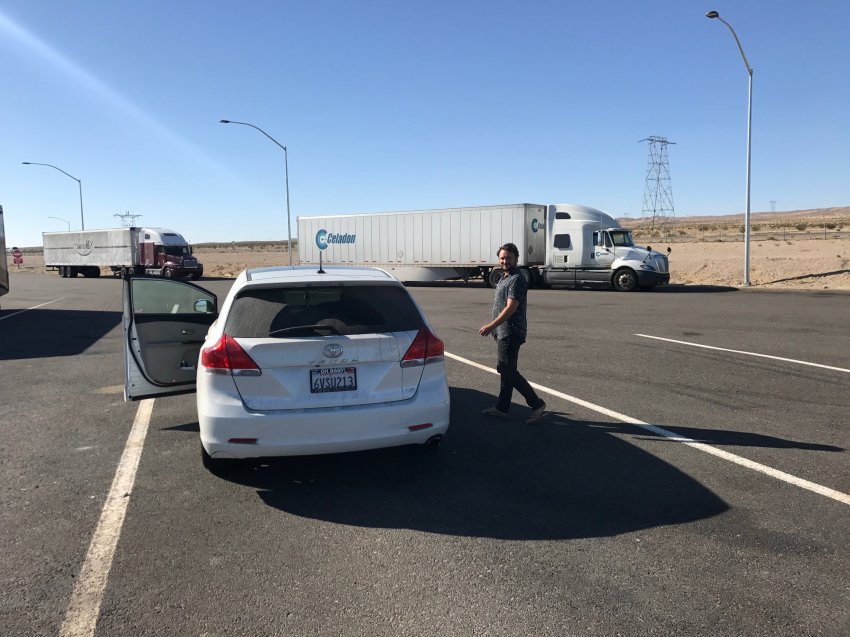 We piled into my buddies car at noon on Wednesday, and drove from Orange County out to Vegas, where our 4th buddy was flying in. After grabbing him from the airport, we hit the tables, and tucked into our hotel room at about 1am. I was up about $100 on blackjack (highly unusual) and up about 10 free jack and cokes, so the 2:30 am wakeup from our designated 2nd leg driver was...fun. We already had the car packed up, so we ventured off into the night towards Zion, arriving at about 6:15 to ensure we could hop in line to get a walk-up narrows camping permit. Turns out the visitor center had just switched from their 7am opening to 8 am opening, so I was first in line for a while, with 3 groups alone until about 7:30. At 8, the visitors center opened, and we had our pick of the even# camp spots. We chose site #10 because we liked the idea of having less miles on day 2. 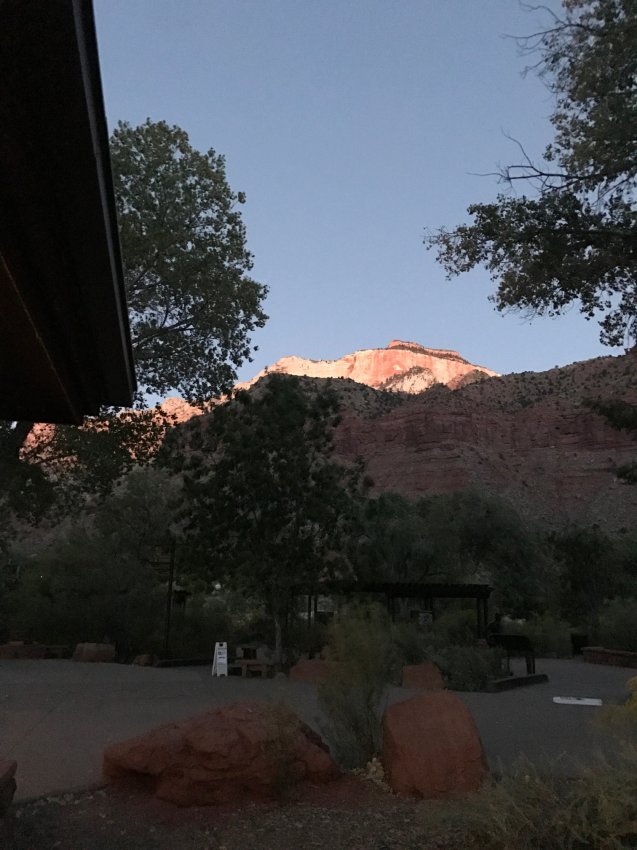 After grabbing permits, I met up with our car which was still waiting in line for a first come spot at the South Campground inside Zion. According to the new driver, we had been about car #20 at 6:20, but there were now 40 cars + behind us. We got our spot at about 8:45, and quickly set up our car-camping stuff so we could get out and do a day hike in the park. We had heard Zion called the disneyland of national parks, but that didn't sink in until we hit the shuttle line. The line snaked all the way through the covered pavilion, and at least a quarter mile down the path, wrapping around the visitor center. The good news was the line went quick, and we were off the Angels Landing. 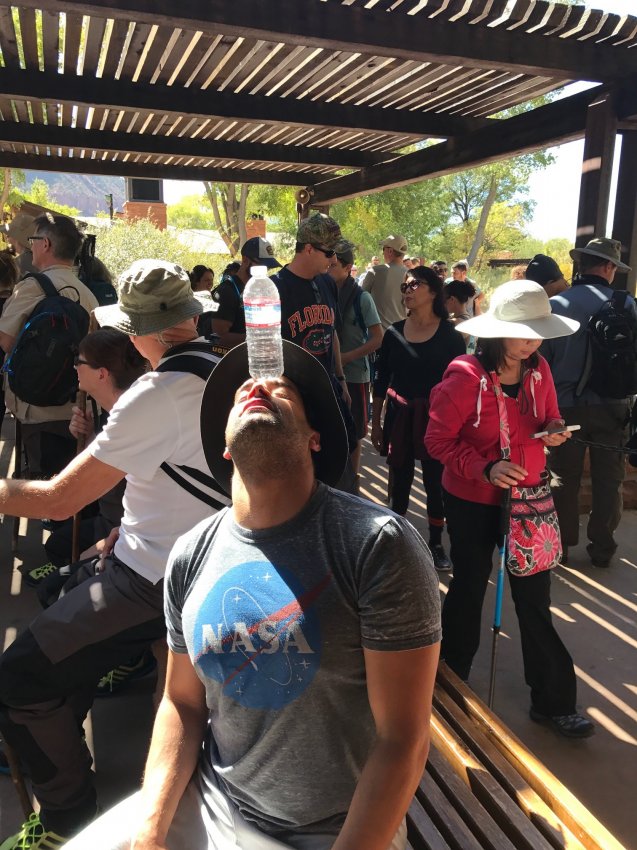 The hike was relatively packed, and it was crazy seeing every mix of young/old/baby/kid etc on the trail, along with all kinds of languages being spoken. Great to see the kind of draw this place had. We made our way to the very top of Angels Landing, and enjoyed the view, before heading back to our base, making dinner, drinking beer, and hitting the hay early considering we were all running on about 2 hours of sleep. 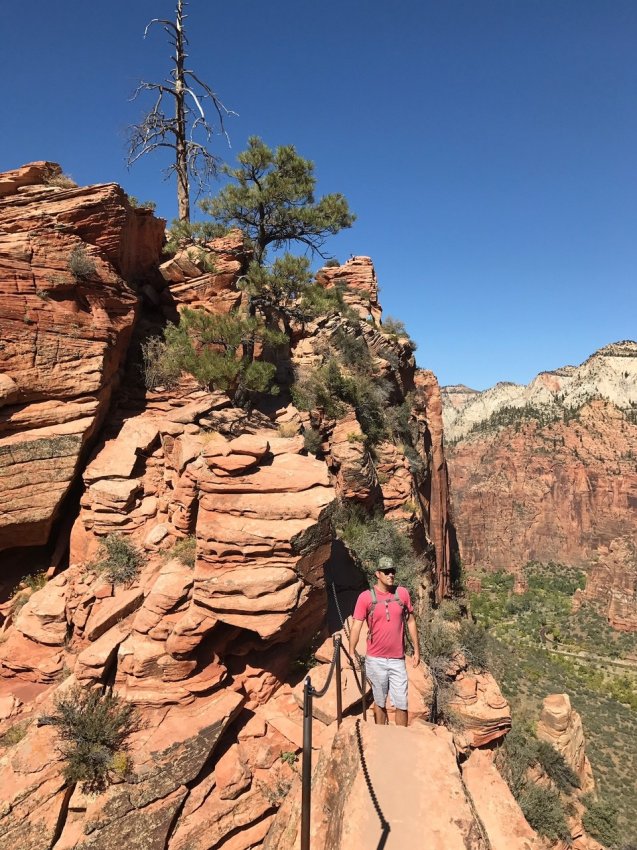 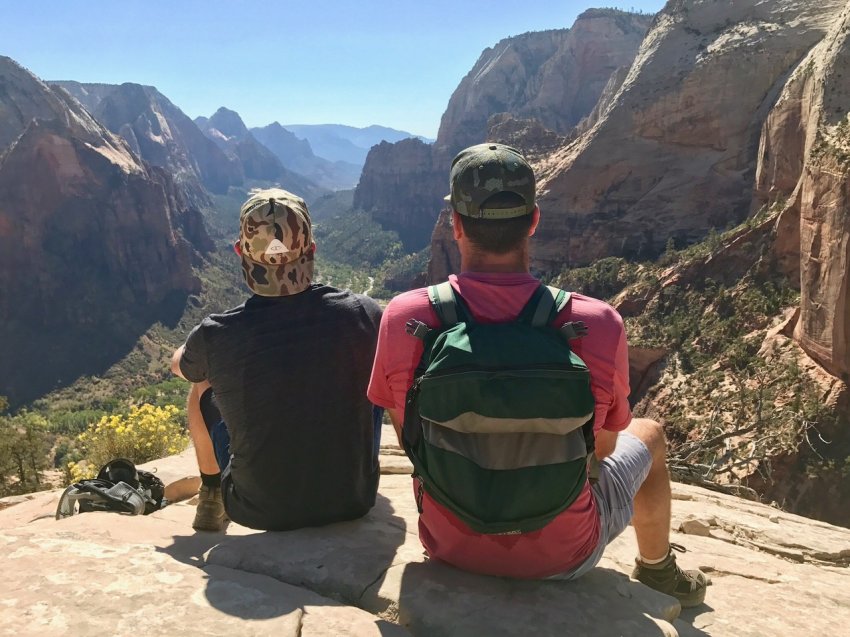 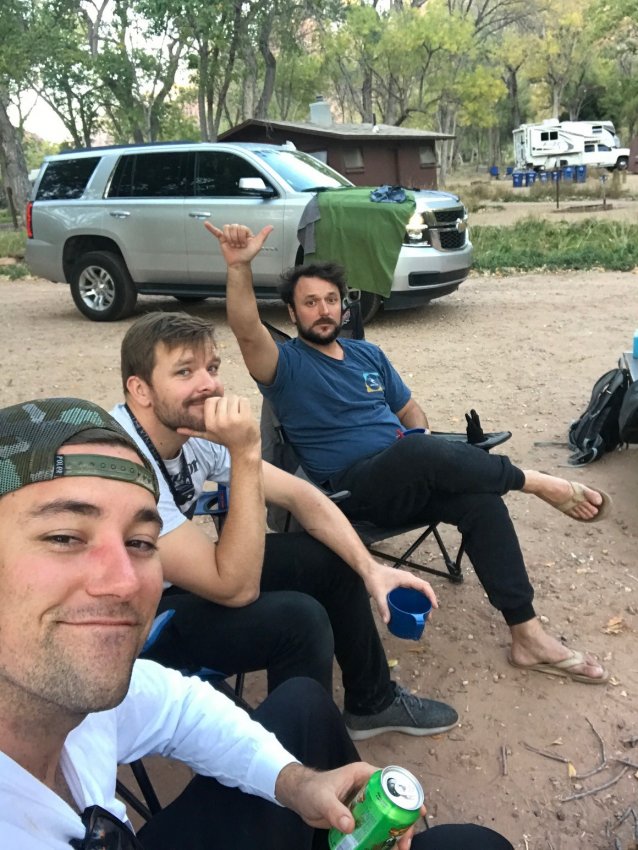 The next morning we made breakfast, packed the car, and met up with our prebooked shuttle at Zion Adventure Co. We had a last minute gut check when one of our shuttle companions strongly recommended renting the boots, booties and walking stick package considering we were being advised of 30+ temps in the canyon with 40 degree water, so a couple of us broke down and got the shoes and stick package, myself included. for $37.50 I had piece of mind, so I just went for it and left my trusty boots behind. after a rowdy 1.5 hour trip (we had a fun van, with one other group joining us to Chamberlains Ranch and another 2 groups all willing to join into fun story telling, songs and music, and a drive who was JUST willing to put up with all our shit and high energy) 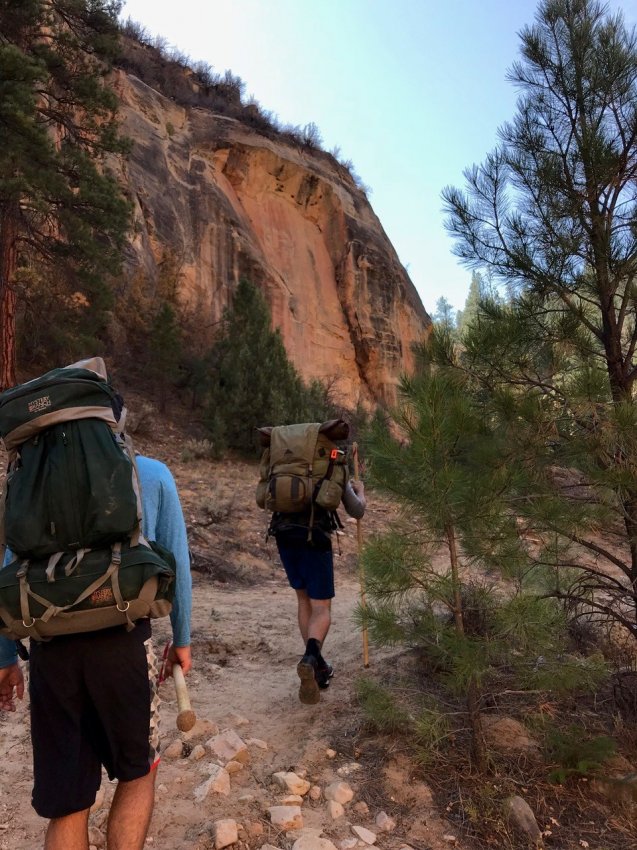 We hit the trailhead a couple minutes late at around 11:15 and hit the trail, knowing we had about 10 miles to go. The trail headed down the packed dirt road, and we got to the old cabin before we knew it, but we knew we couldnt wait to get to the canyon so we continued on. Every bend in the path brought us closer to the water, and we could sense that we were beginning to dip into the zion canyon. Every turn seemed to have better and better views and vistas, and the turning fall folliage was amazing. Temps were holding stead at likely mid 70s, and we were making great time. River crossings were shallow, sandy and frequent, and we were able to follow the menagerie of trails as we made our way down. 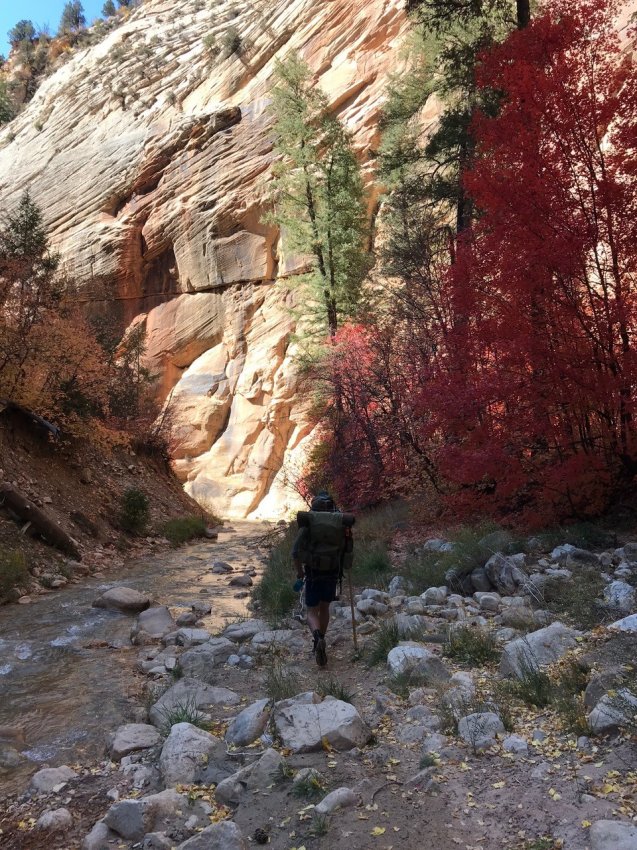 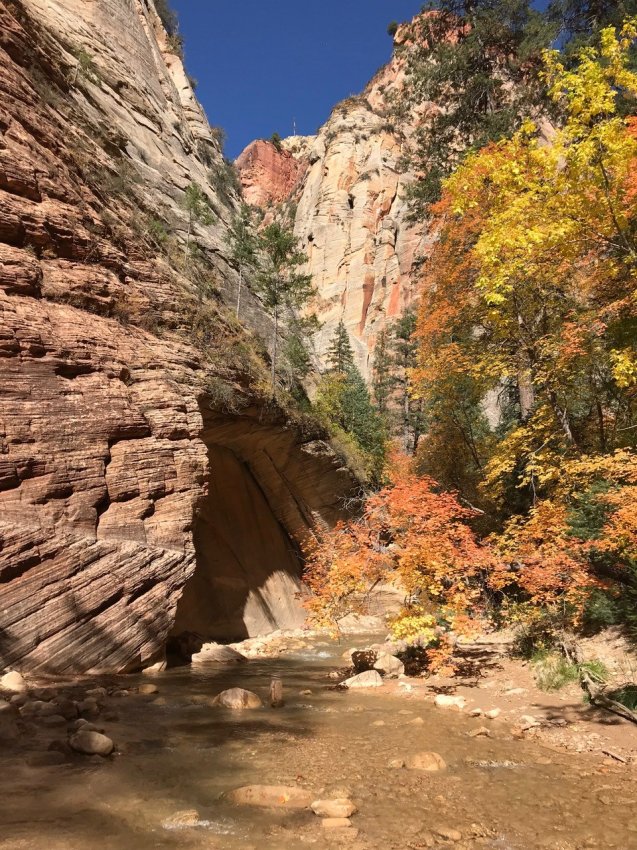 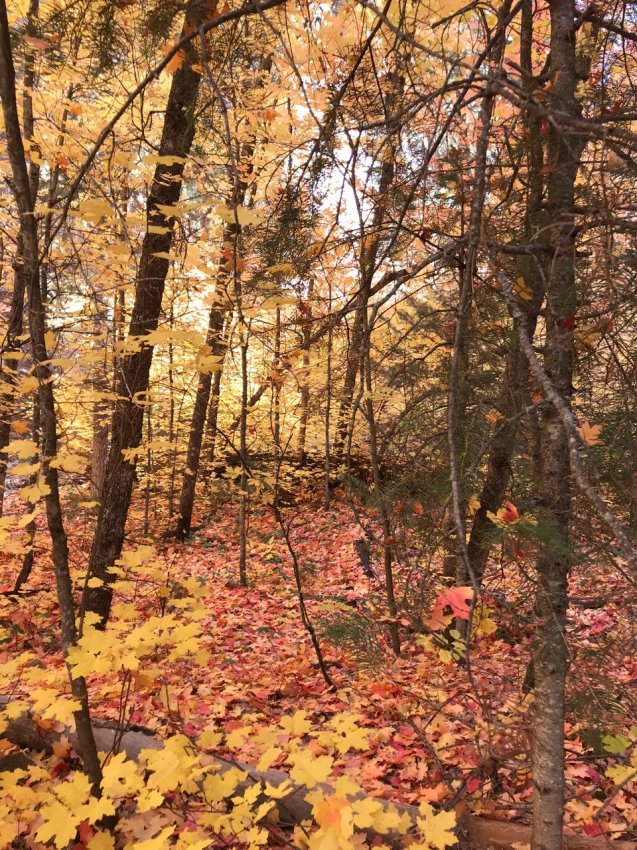 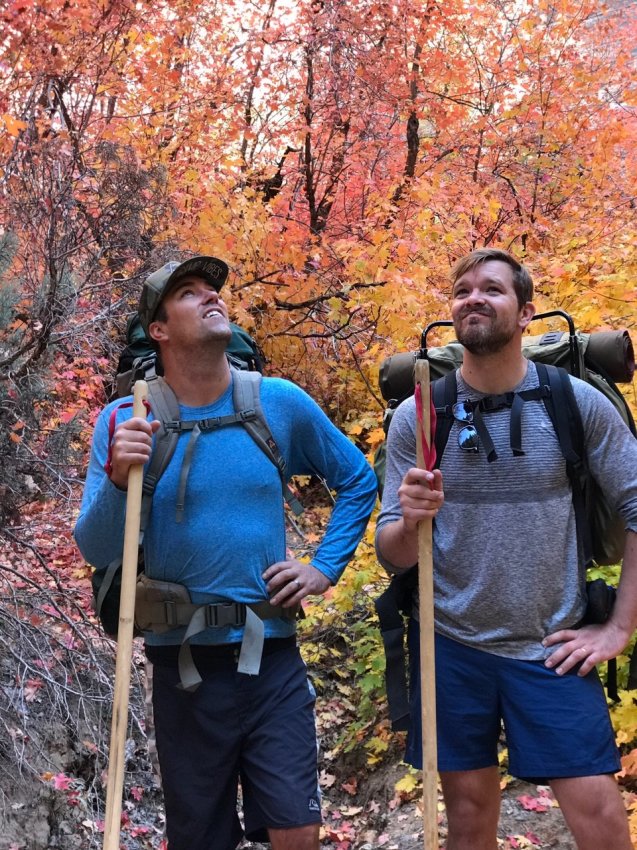 Its really hard to describe the amazing beauty of everything that we saw. We were constantly keeping an eye on our footing and next crossing and path, while keeping the other eye on the amazing rock walls around and above us, making sure to turn around full 360s so we didnt miss the views coming at going. We stoppd for a lunch break when we felt like it, consulted a map, and realized we were somewhere in between mile 6 and 7 and were not winded. 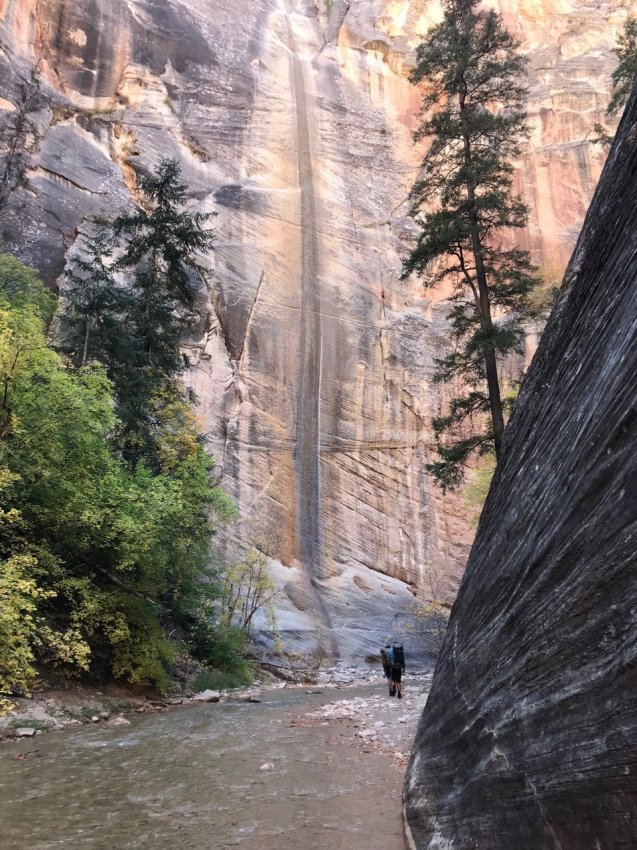 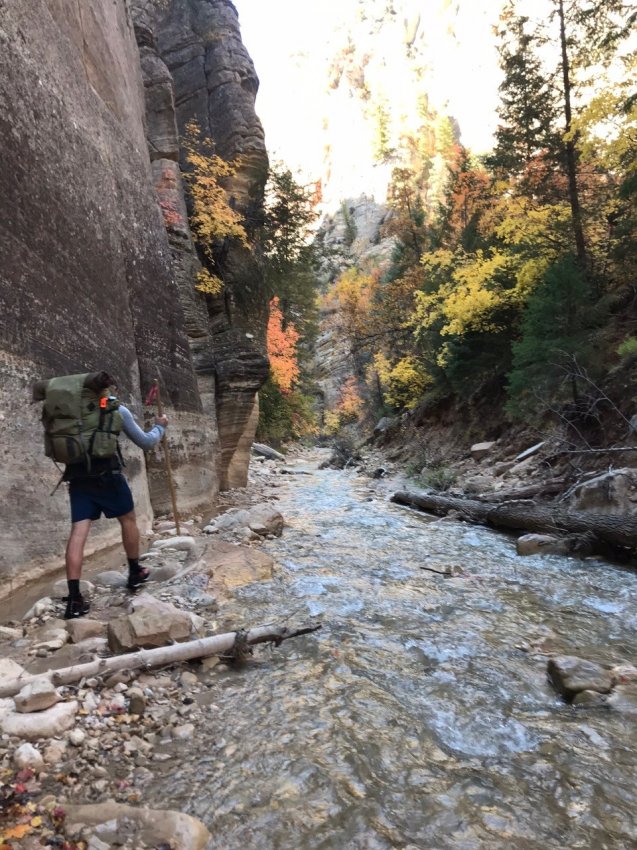 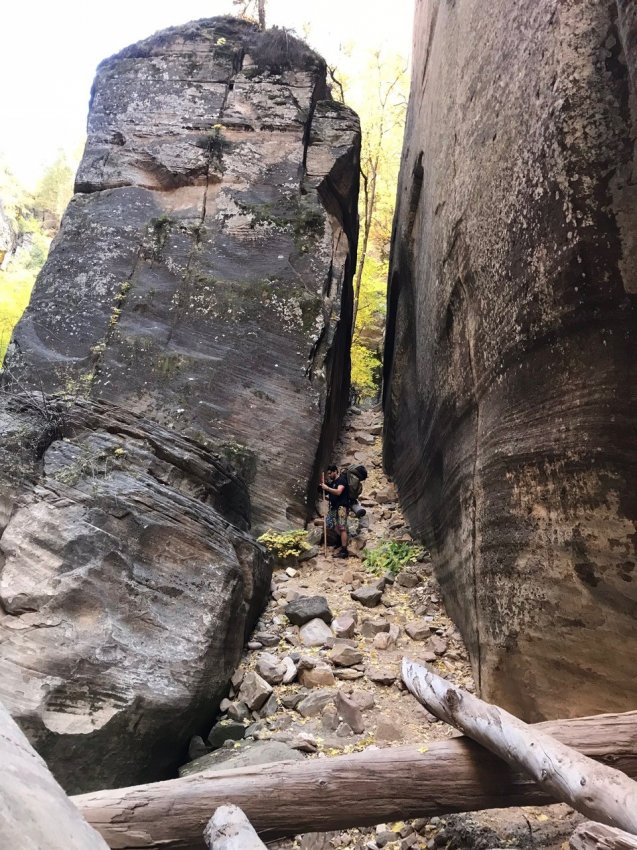 The next set of miles carried us deeper into the canyon, as the walls grew taller, the shadows grew longer, and the river louder. What an experience. Without seeing another soul, we hit campsite #1 and knew we were in the home stretch. We didnt see an occupied site until site #7, which was the first person we had seen in over 9.5 miles. compared to the day before, it was perfection. Site #10 was great, with an elevated look at the river and a great section of dry path on either side. We had been advised to hang our dry bags, but nobody really stressed the fact that the mice situation was GNARLY. as soon as dusk hit, they were out, in our bags, up in the trees trying to grab our hangins stuff, and coming as close as they dared. While tucking iin, i had to physically throw one out of our tent, only to awaken at 6am and find out that he had chewed a hole THROUGH OUR TENT to get back into a buddies back iwth a granola bar he had forgotten. 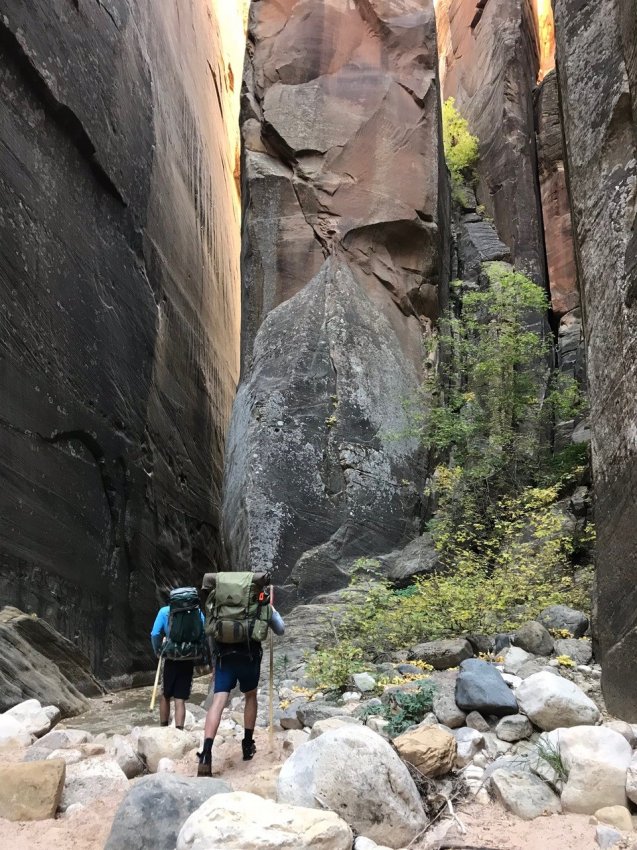 Other than that, great spot, not too cold at night, and the river around us made sleep easy. We took our sweet time in the morning and counted 4 groups passing us before setting off ourselves, each a mixture of either a couple, or a group of friends. Sadly, they were having a bit of a rougher time than us, and we passed them within the first mile. 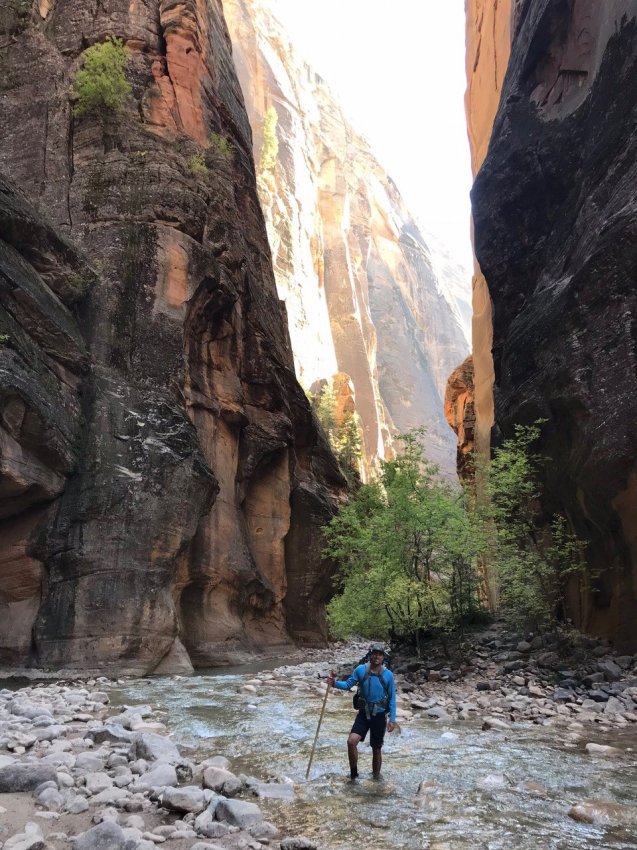 The striking thing we noticed on day 2 was that the river rock composition had changed. From nice soft sand, gravel and chipped rock to massively slick black rock and rushing water. I really felt like I was getting my full dollar use of the shoes, booties and stick this day, although my biddy who had bough his own booties and used an old pair of running shoes said he had no issue. 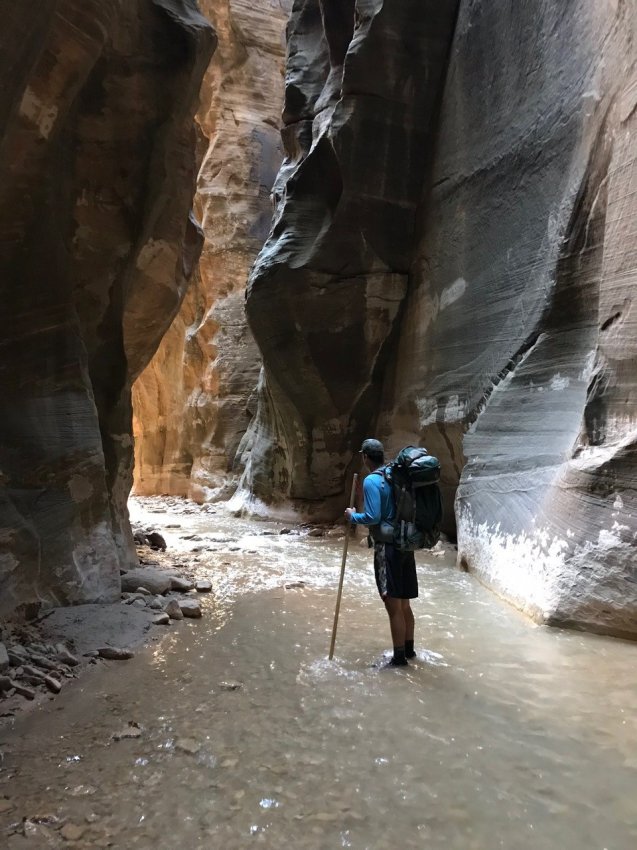 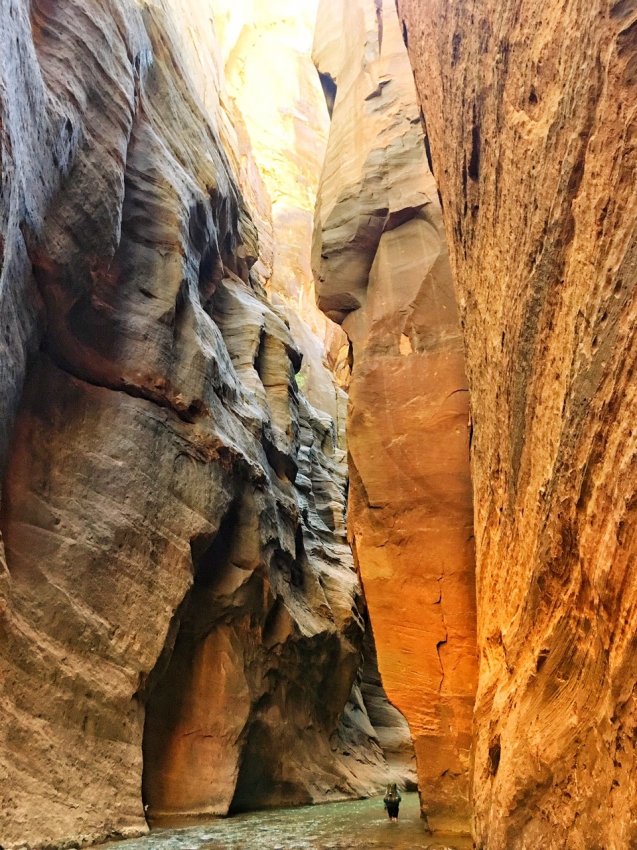 Running a little behind schedule, we put our nose to the trail, stopping for the requisite pictures, and tring to navigate over larger and larger boulders and trees, and through deeper and deeper water. The deepest crossing we had was about waist deep, although this only occured once. Nearing the midpoint of day 2, we finally caught our first day-hikers, and knew we were about to be in the thick of it. 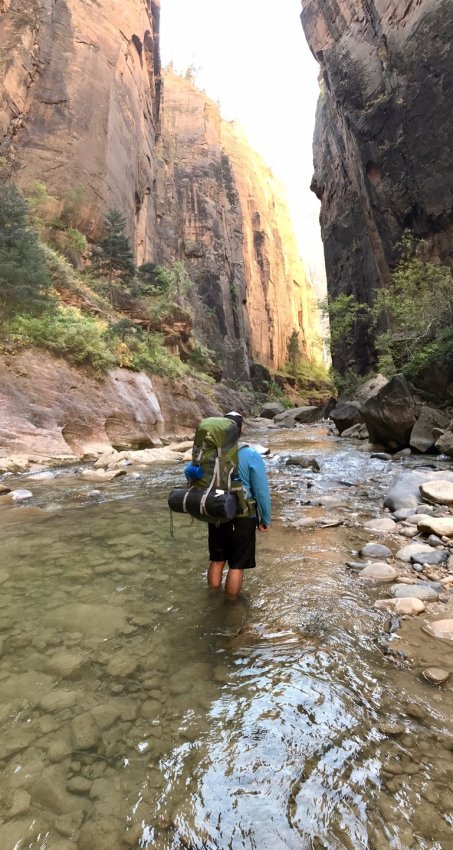 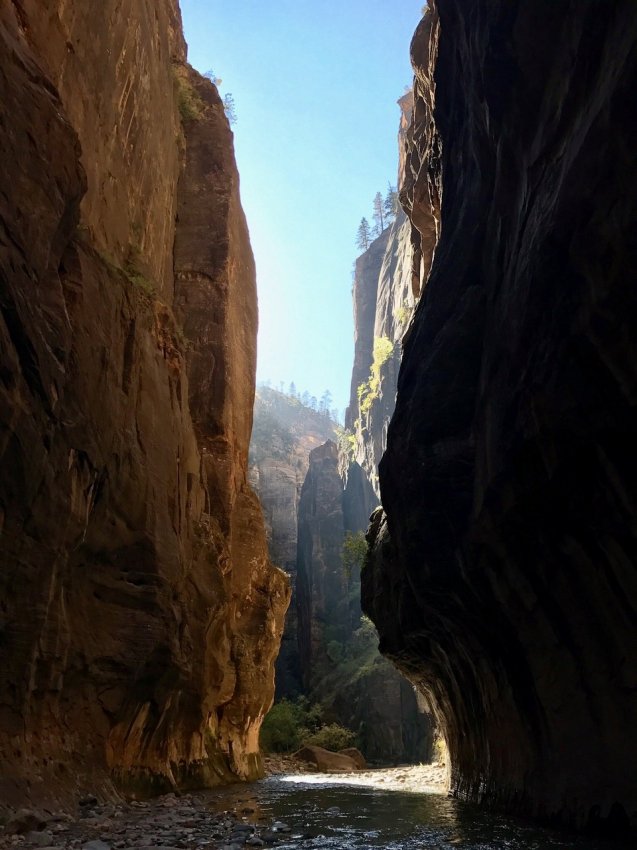 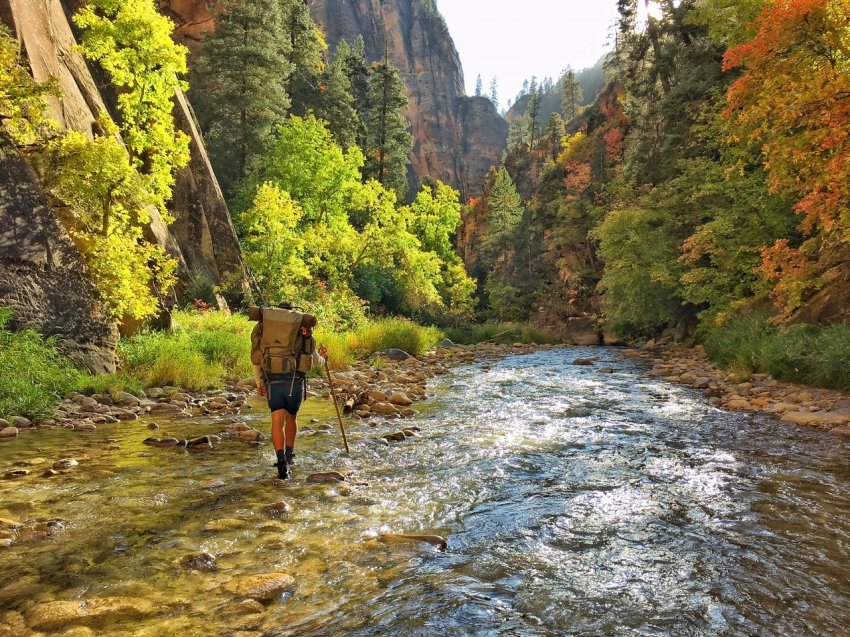 While not insanely crowded, it was definitely different than the solace we had on day 1, but the views were just as incredible and at times we were still sharing the river with only our group. until we turned a bend and saw the next group of hikers. We made our way to our last river crossing, answered some questions from some very interested day-hikers about our trip (yes, you will be walking in the river, yes, almost the entire time) and made our way to the shuttle, our car, and then back on the road to vegas to catch a flight home. Short trip, but i think it hit all our little pieces of nature that we needed. Thanks for the recommendations, what an amazing time 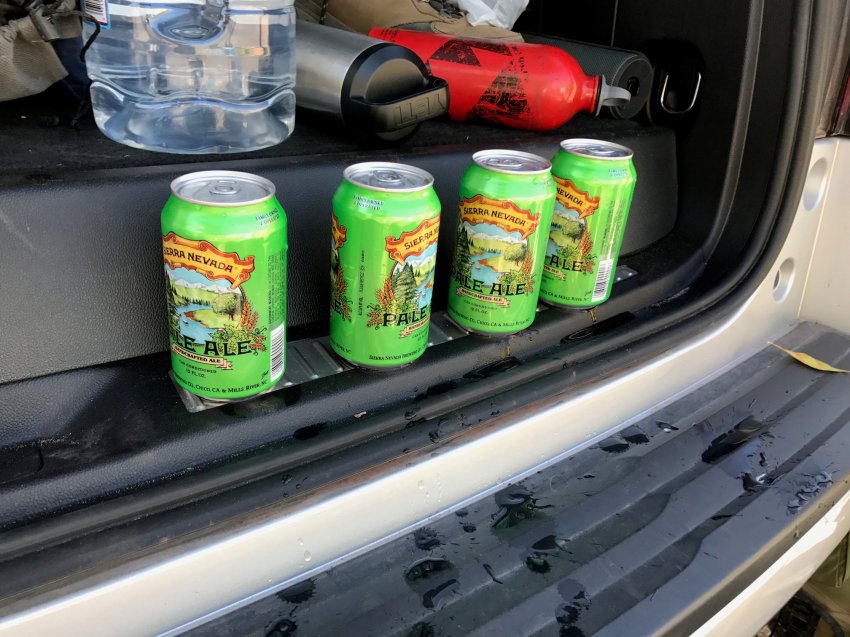 Nice pictures, thanks for sharing.
i love this site

Awesome first trip report. Looks like you nailed the timing with the changing leaves.

I haven't heard of mice being that bad before. That would've made me nuts.

Thanks for sharing this! Glad you got it all to work out well.

Nice TR. Vegas first? don't know if I'd have made it to Zion, lol...
Here we find Nature to be the circumstance which dwarfs every other circumstance, and judges like a god all men that come to her.

Zion in fall is hard to beat, even with some crowds. The narrows is a perfect intro.
Most of those campsites rarely go more than a couple of days without use during the season... unfortunately when it's warmer it's not just rodents, but can also be flies...

Wonderful! I had never heard the Disneyland of National Parks moniker. Love it! It makes it quite the honor to not run into another soul like you did on day 1. The walls are taller. The leaves more vibrant. The river more pristine and crisp. The exertion, a source of pride. You know....that poetic crap! 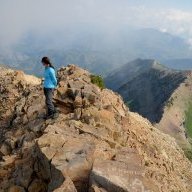 Great report showing that you can pack a lot into a short trip. We had a similar experience overnighting the Narrows at the end of September two years ago but camping at site 7. Thankfully we didn't have a rodent invasion that trip but have experienced this in the Grand Canyon and Coyote Gulch previously so when backpacking in canyon areas I take my food in a metal mesh bag called a Ratsack.
You must log in or register to reply here.
Similar threads