I had reservations for two nights at a site on Ice Lake. The books said the place was beautiful and I was excited. I had thought about taking my Klymet dinghy, but it was supposed to be cold and rainy, so I just packed regular backpacking stuff. This winter I read Mike Clelland's backpacking book, and except for my beautiful apple green Helinox chair, my pack was blissfully light--at least for me. 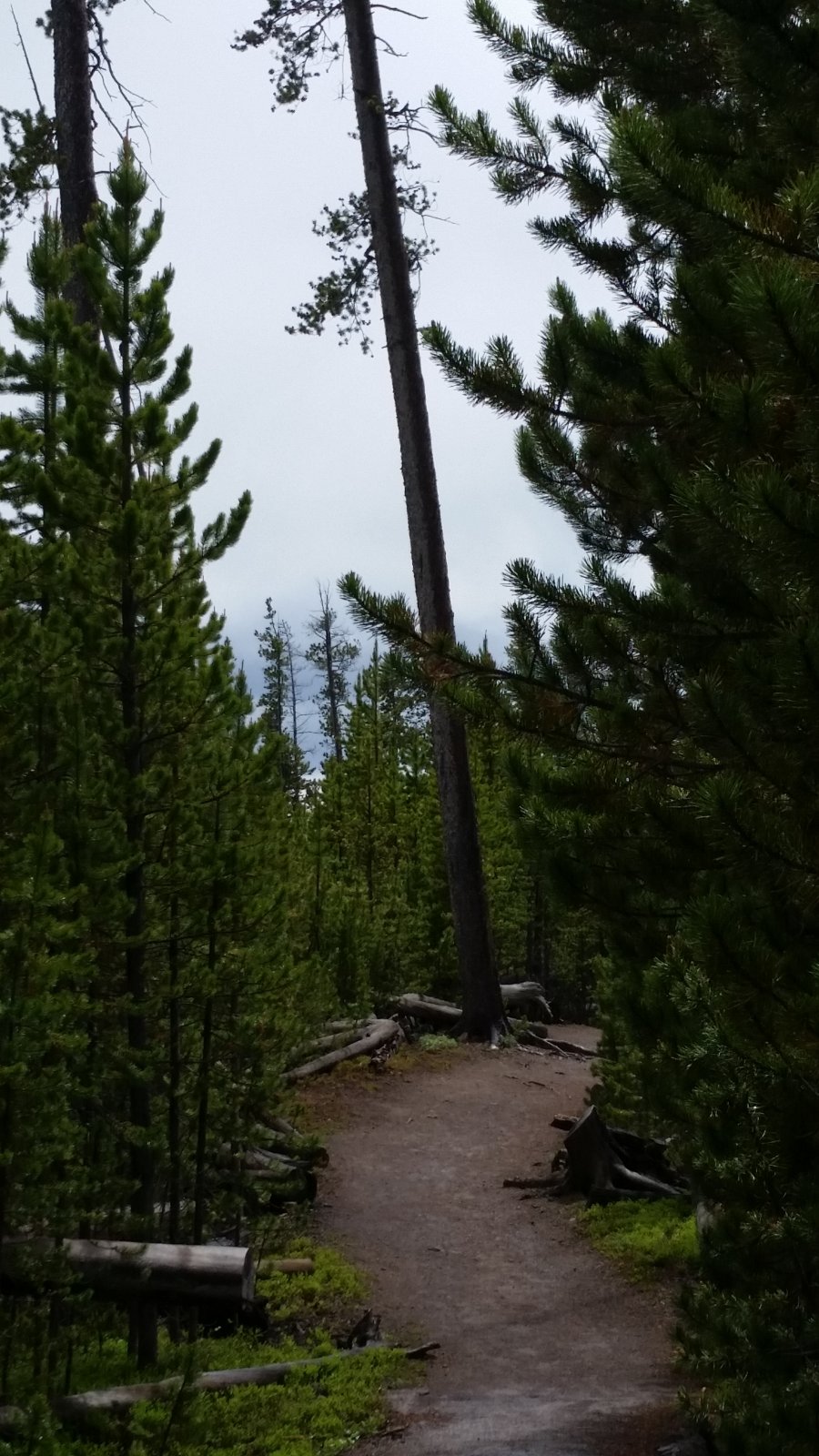 The trail went through young pines and downed logs. I assume it had been burned in a forest fire, maybe in '88. I don't really know. It was like this pretty much the whole way. Having watched lots of bears maneuver easily among downed trees like this, I chatted as I walked, hoping they really didn't want to meet up with a human.

I got to the end of Ice Lake, and turned on the trail that led toward Wolf Lake. I was just going to the end of the lake, but that trail would take you over to Canyon if you didn't mind getting your feet wet. 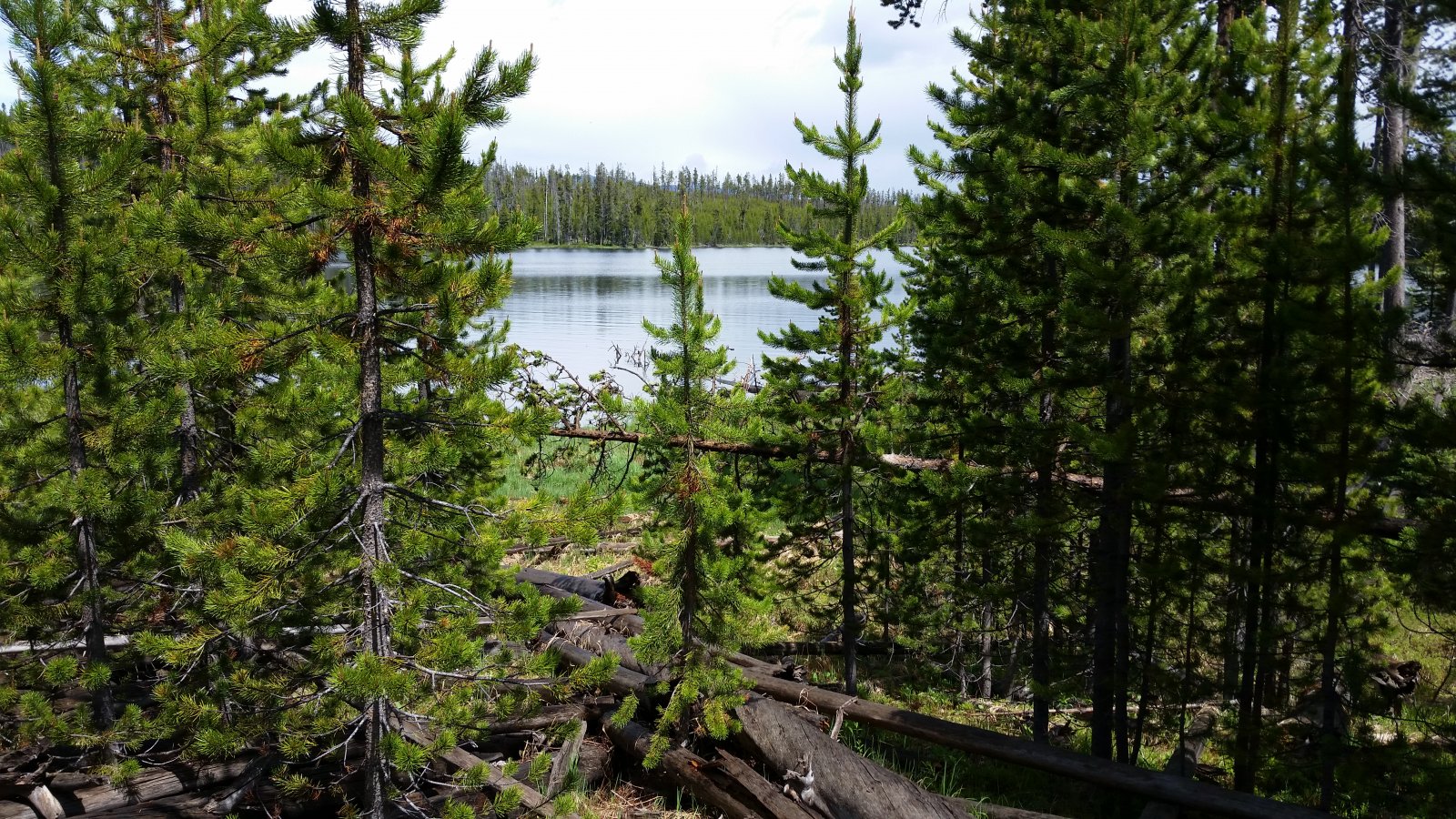 I ran into a couple heading back toward the trailhead, and in a bit, I ran into a group of four. They had hiked to Wolf Lake and seen a grizzly. I hoped the grizzly liked Wolf Lake.

I soon came to the end of the lake, and then the turn off for the campsite. I've not backpacked to a repeat site yet, at Yellowstone, so as I enter every camp, it's with hopeful anticipation. 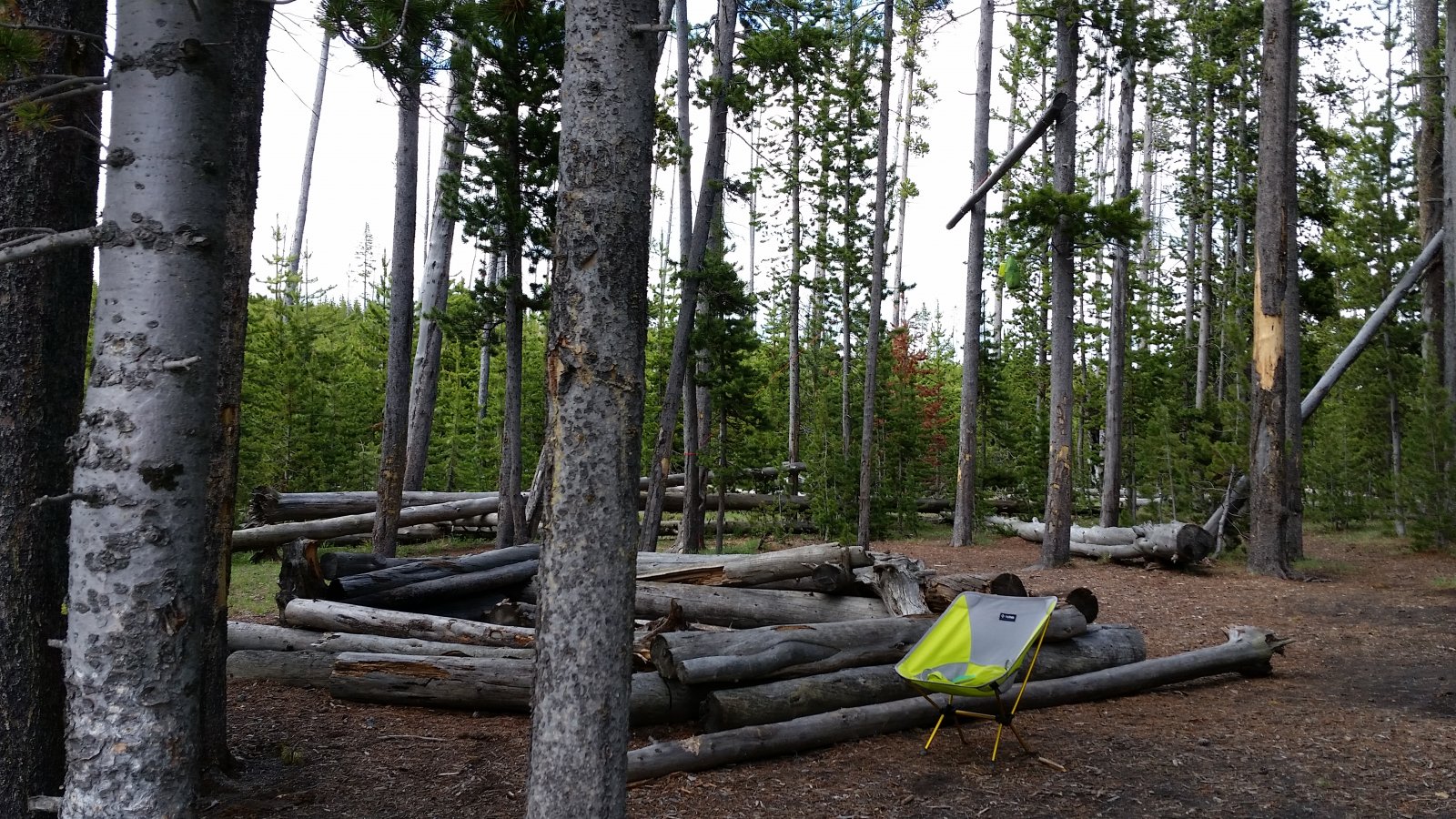 I hung my food, then put up my tent and dropped most of my stuff in the tent, then went back to the kitchen area. Wow. 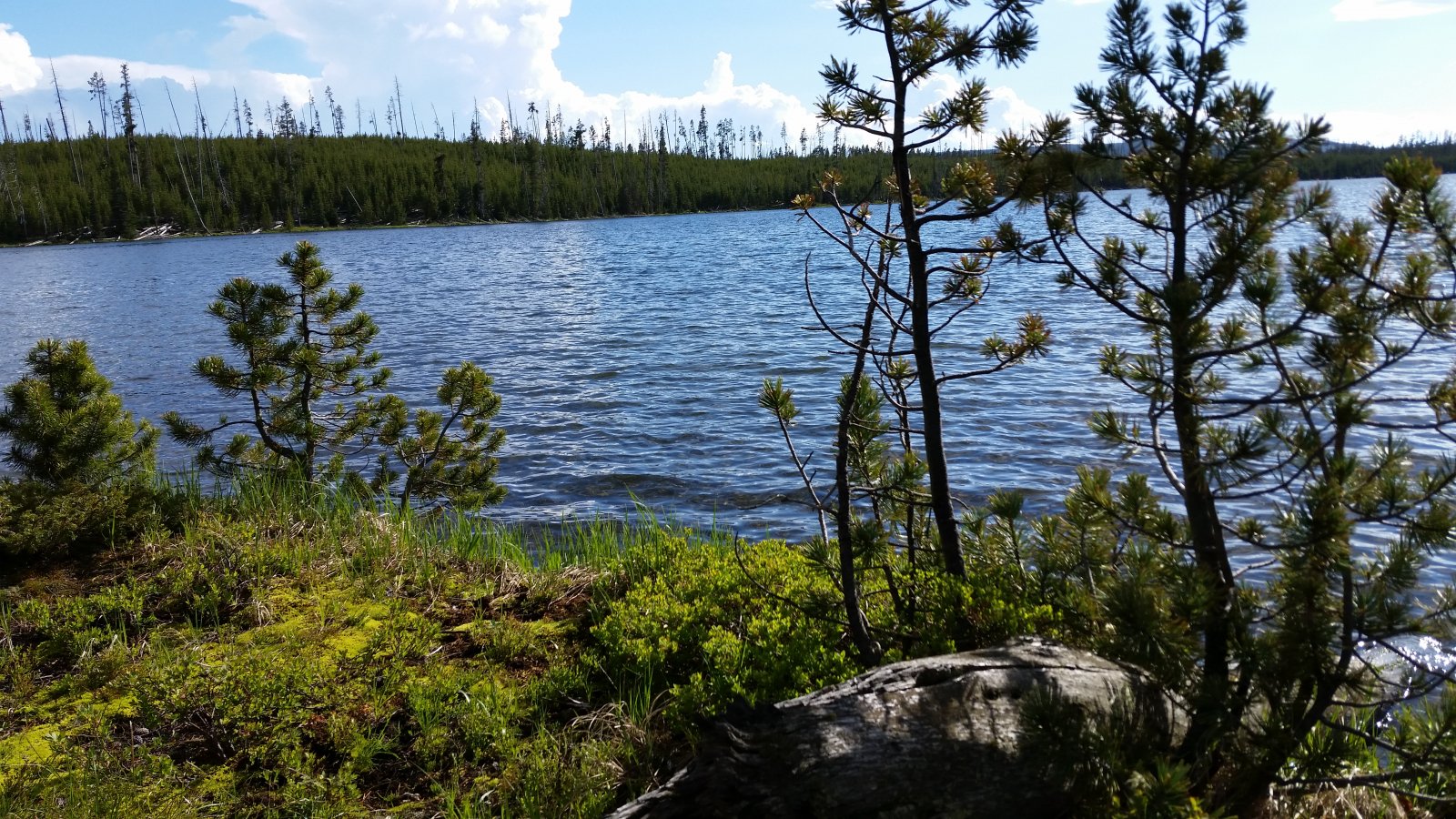 The kitchen area was spatious, with a big fire area, and just off that was the lake. I put together my chair, and sat and stared. A storm came in, so I went to my tent and puttered with my now-reduced amount of stuff, and tried to get organized. The storm ended relatively quickly, so I went back out and had supper (Mountain House Chili Mac, with an expiration date that says it'll last until I'm 86 years old. 86.). I also had coffee, which I drank while sitting and staring at the lake, and continuing my bear chatter. When I finished my meal, I hung my bear bag again, and went back to watching the lake. I used to live near Pictured Rocks National Lakeshore, and this reminded me of Trapper Lake, one of my favorite places there.

I had continued my bear chatter, and a one point, a voice from within my campsite responded with, "Hi, I believe I'm supposed to be camping here tonight." "Um, no." He was quite amicable... but he was pretty sure this was is site. Alas, he had left his permit on the dash of his car (got a little confused). I headed to my tent to confirm I was in the correct site. He commented that I had already hung my food--which surprised him (exactly what ranger issued his permit that he thought that was the last thing you should do?). And my tent was way further than the hundred feet your tent needed to be from the bear pole... . My permit verified I was at the right site. He said he must be back at that other site... . Was I going to have a fire? No.

At 6:30 pm, he headed back toward the trailhead. I assume he had no permit and figured he'd get a nice site without the effort of actually getting a permit (I apologize if I'm wrong.). With him gone, I went back to doing, well, nothing. I'm pretty good at it. 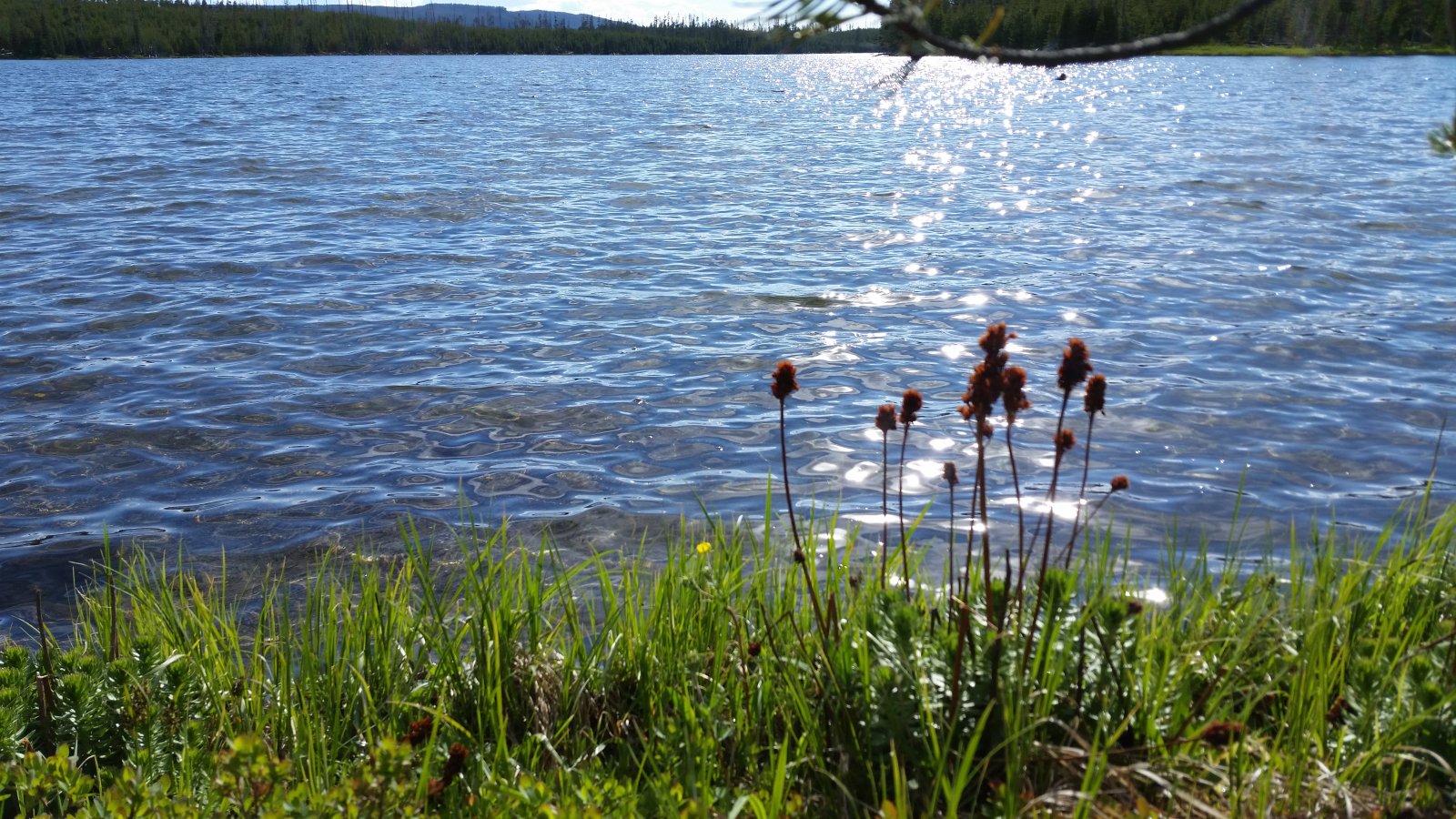 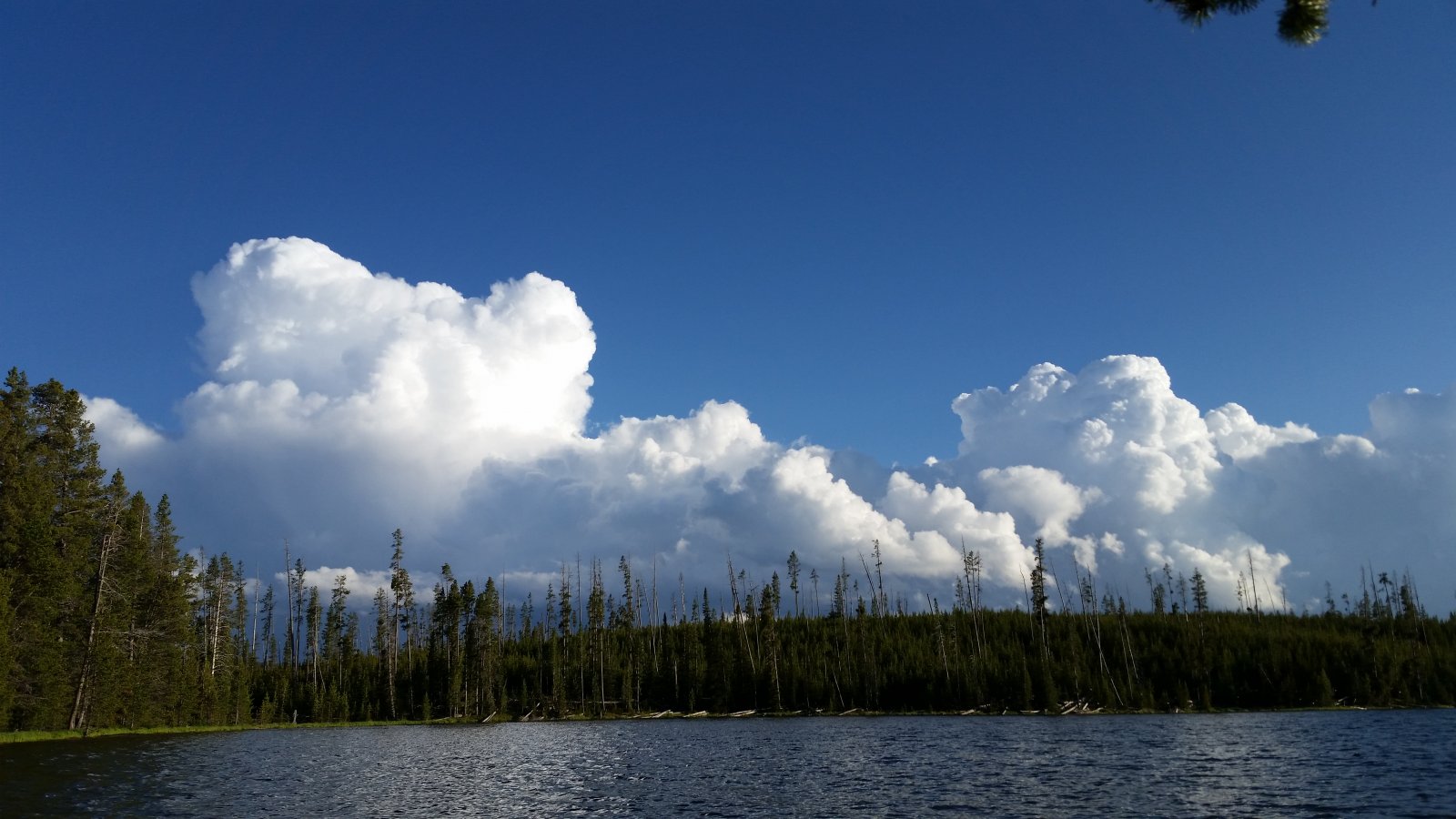 As the sun got low, I decided I'd go to my tent and make sure I had things organized for the night.

This is the sunset from my tent. 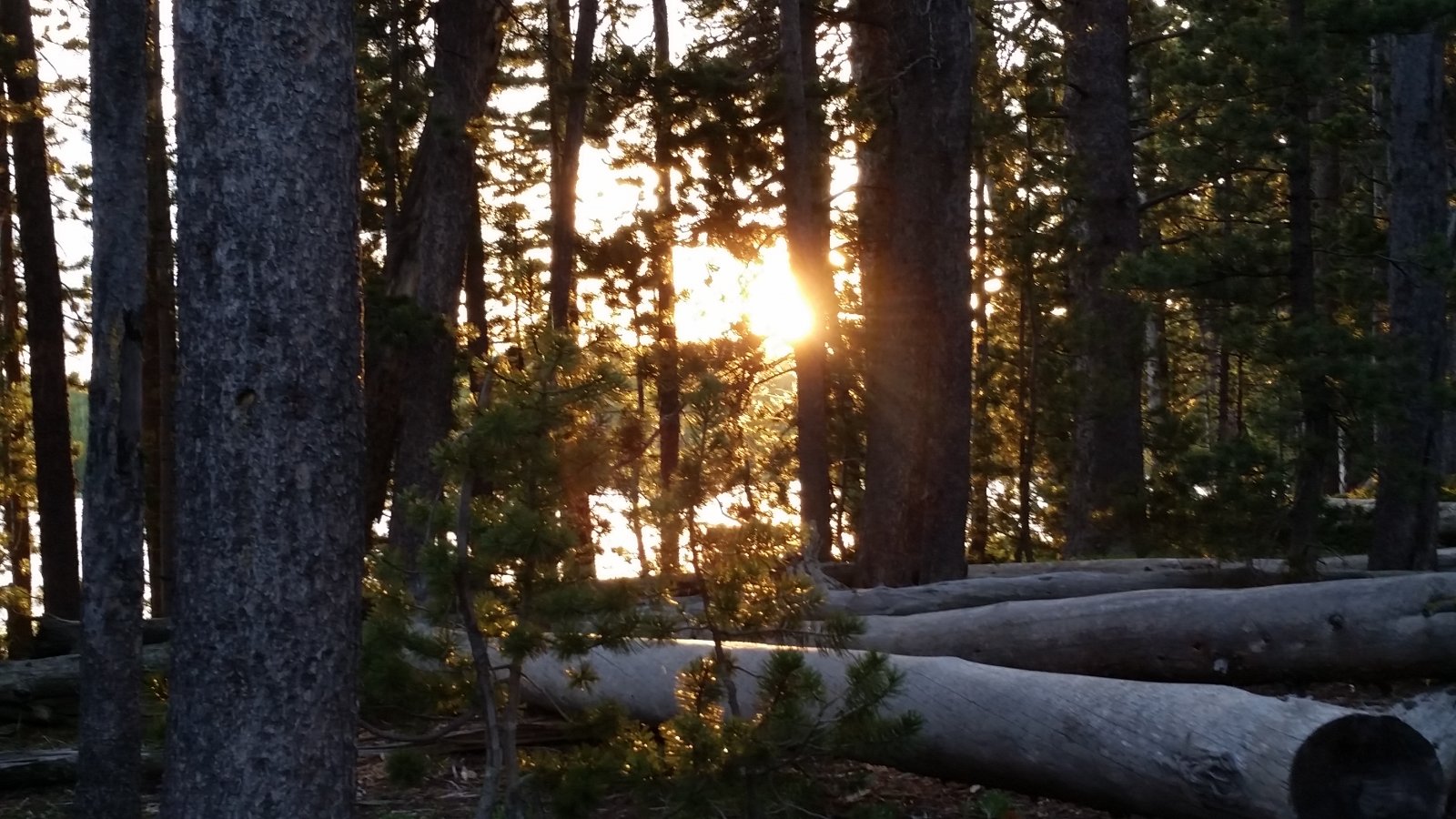 I thought about going out for a sunset photo, but decided this was good enough. Maybe I was wrong. I dunno.

As it got dark, a storm arrived, including lightening. I thought about how the forest seemed to be the way it was because of a forest fire, and how I'd been busy worrying about grizzlies (and thoughtful about a guy trying to scam a free night in the backcountry--again I apologize if I misinterpreted. ). And now my brain was worried about lighting starting a fire. Of course it didn't happen. It rained a good deal during the night, and for a little longer than I would have liked in the morning, but it did stop.

I got up and got my food bag down. I had some oatmeal, but I decided on mixed nuts and a Kind bar instead, with coffee. It was a good choice. Again, I sat in my Helinox chair and looked out at the lake. 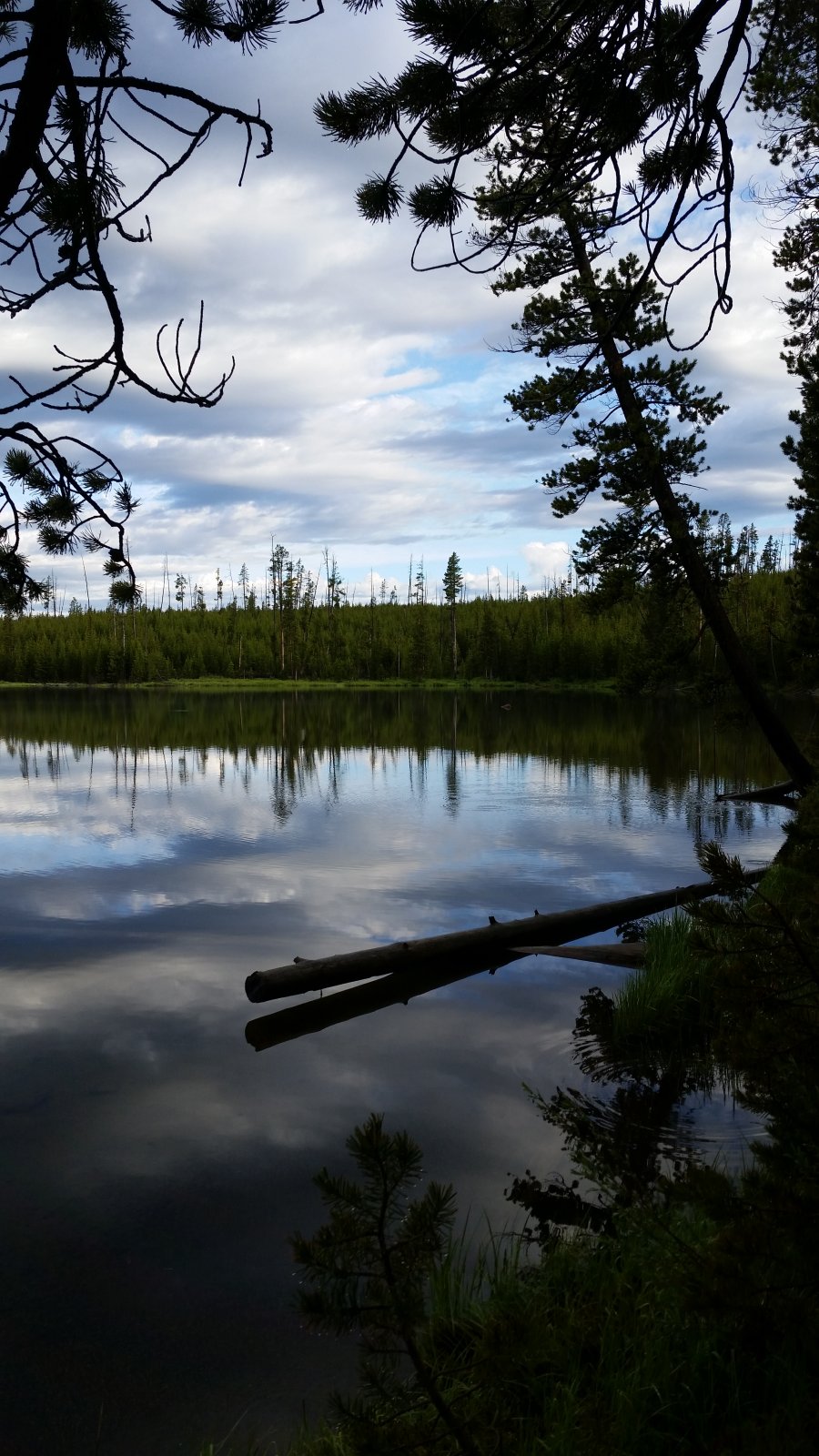 It's kinda hard for me to figure out why people don't backpack. I could be eaten by a bear, or get bit by a tick, maybe. But I also get to eat breakfast right here. 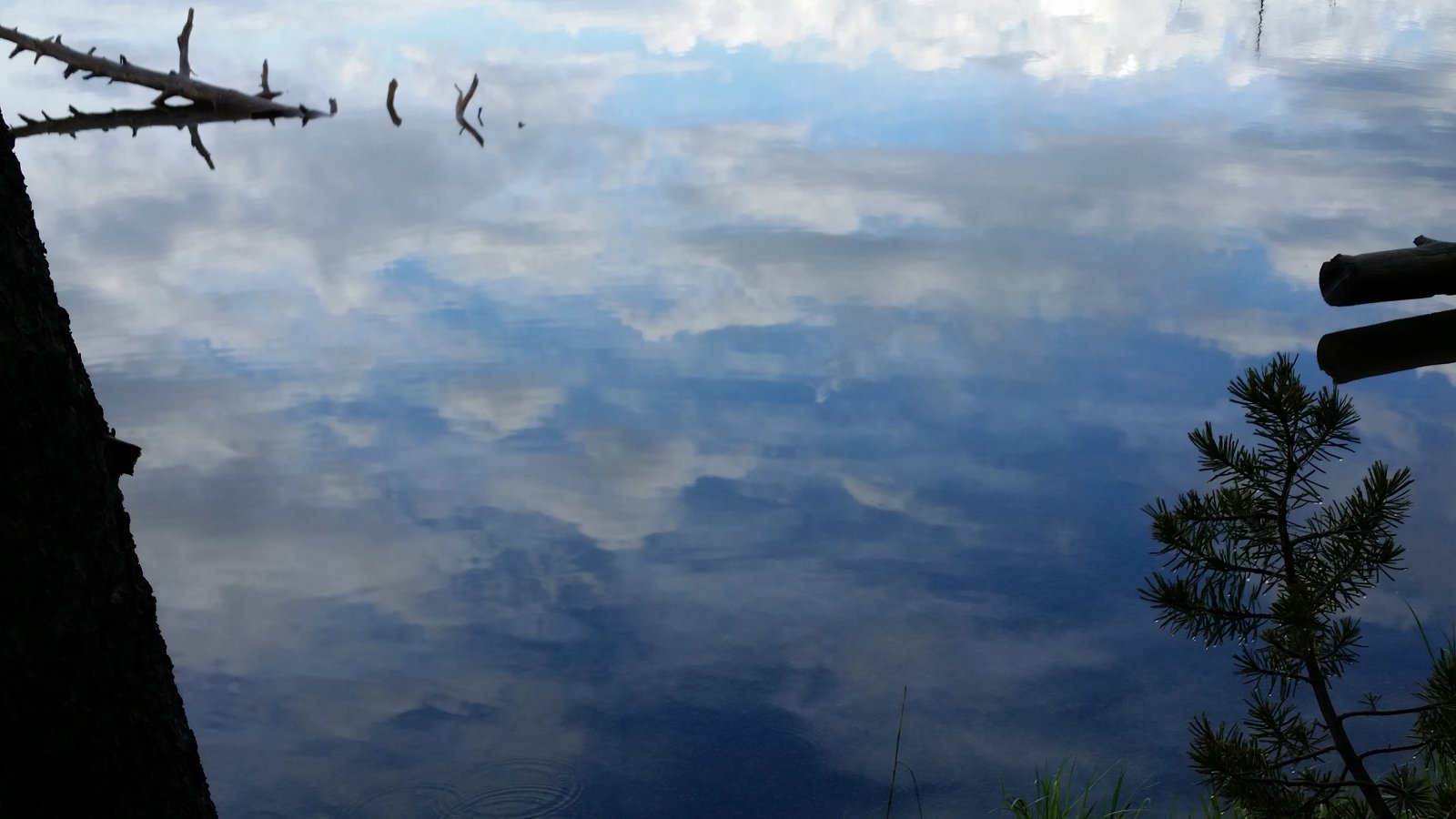 I get to watch the clouds reflect on the water.

I sat. My soul was calm.

I hung my food again.

I headed back to my tent, where I packed the last of my things and took down my tent. 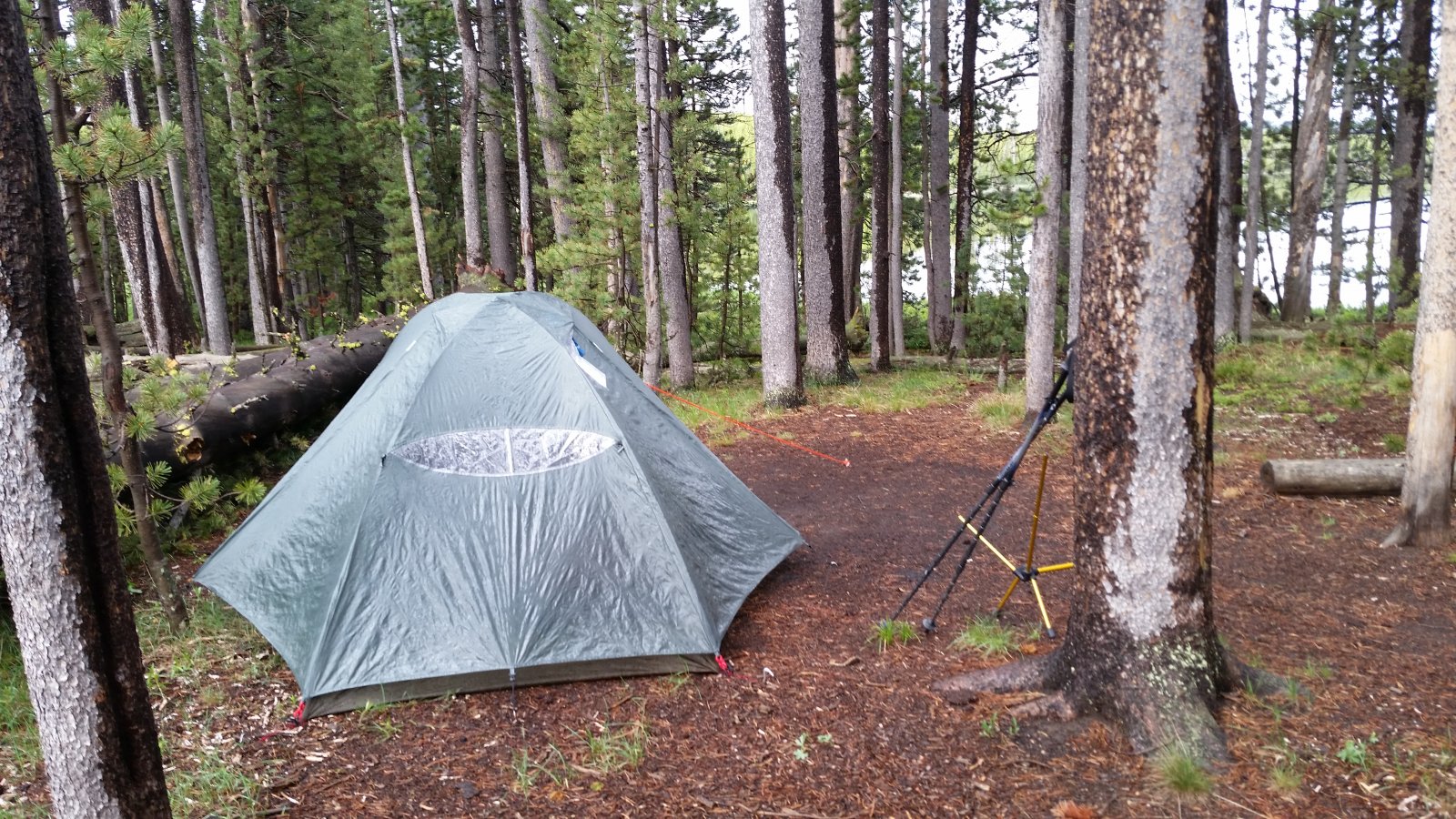 I went back to the food pole and got the bag down and loaded it. I headed back to the trail. I turned toward Wolf Lake. I wasn't really going to go there, I just wanted to see the Gallatin River at this point. That brawny river, when it's downstream, is a rushing gurgle here. It had rained, so it was up, but it was like an adolescent river, or a creek. 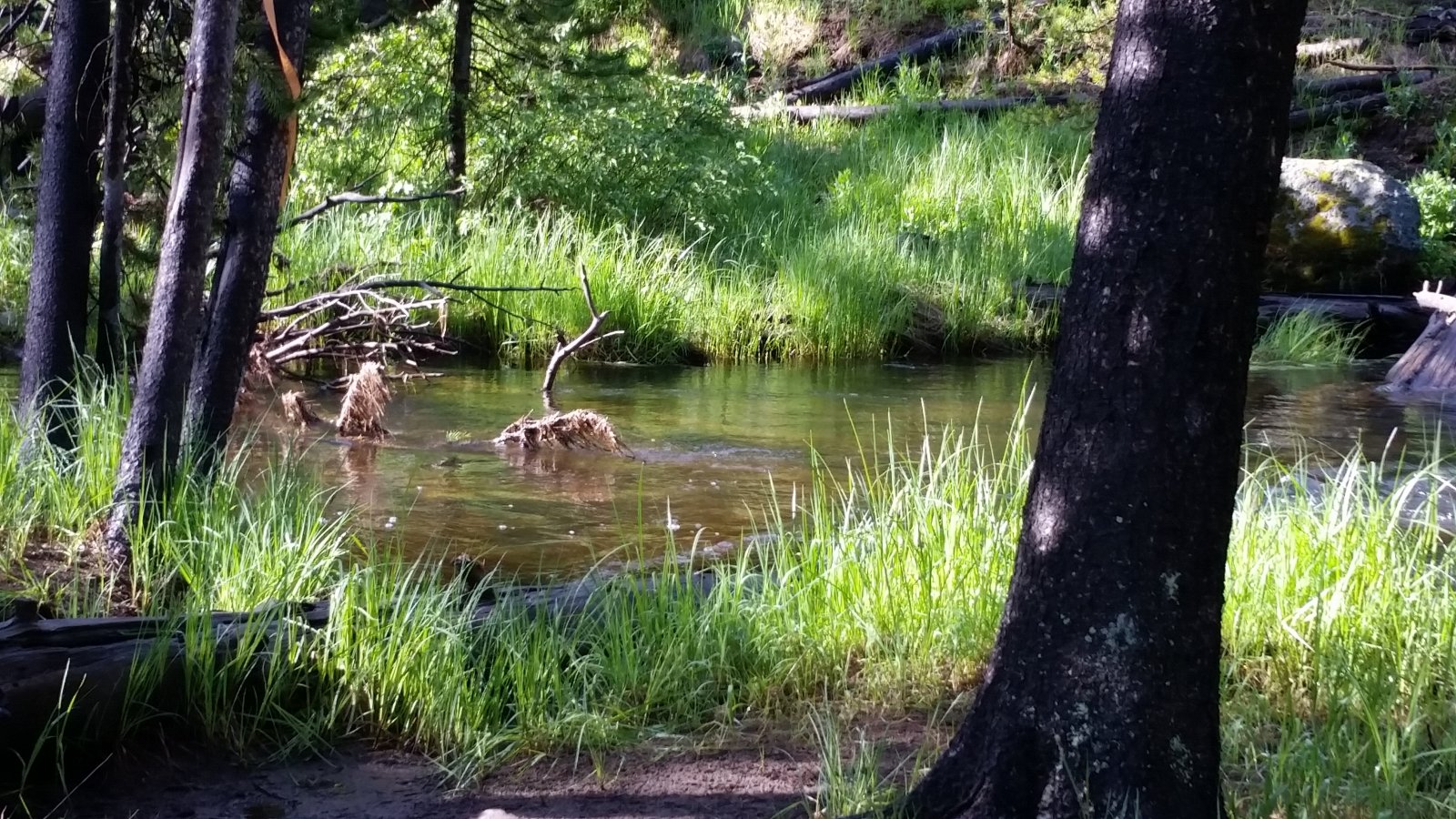 In a few moments I was back at the sign for the campsite. I looked at it thoughtfully, but moved on. I had things to do at home. 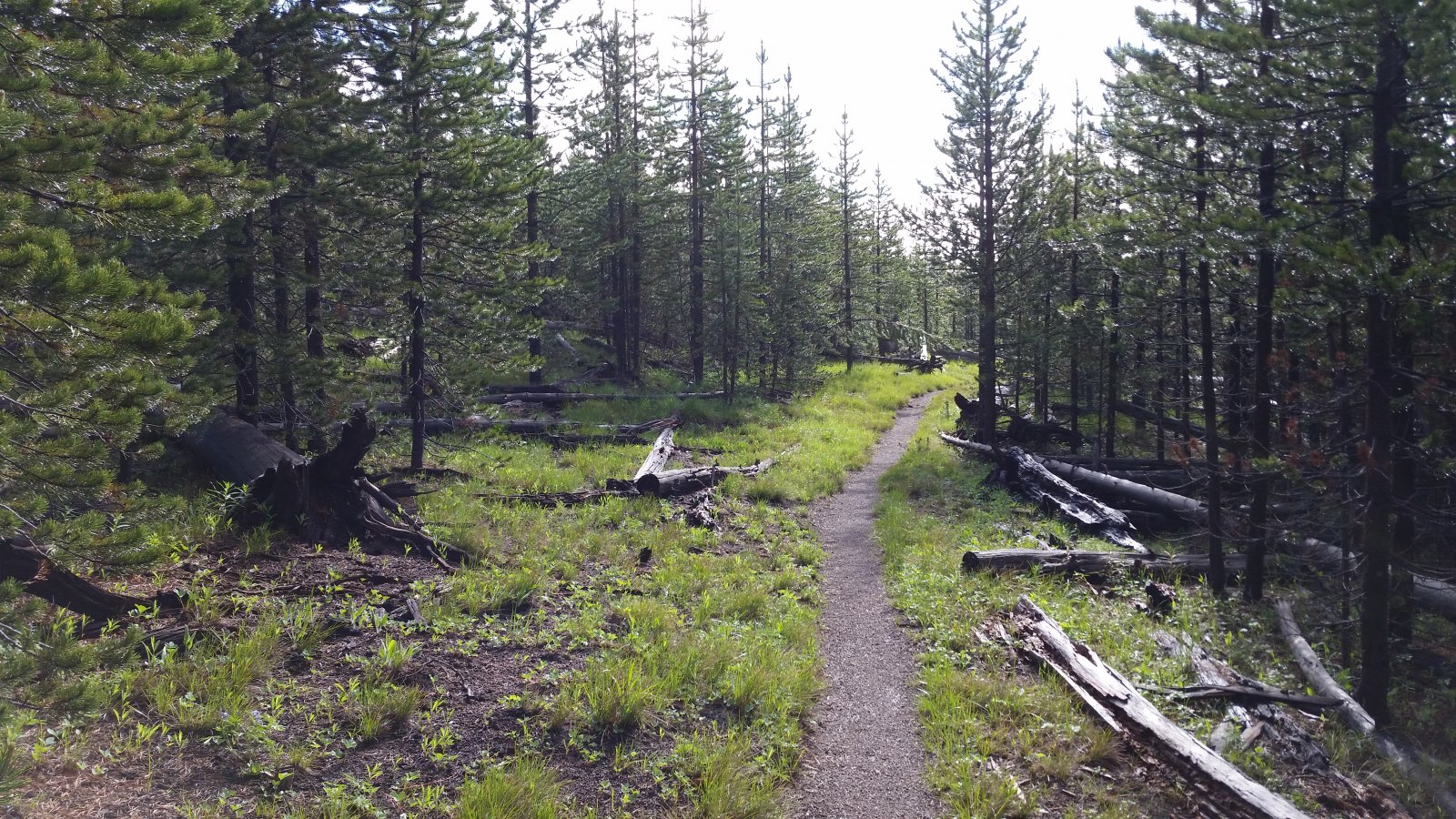 Of course I had to get back to the trailhead.

There were things to distract me. 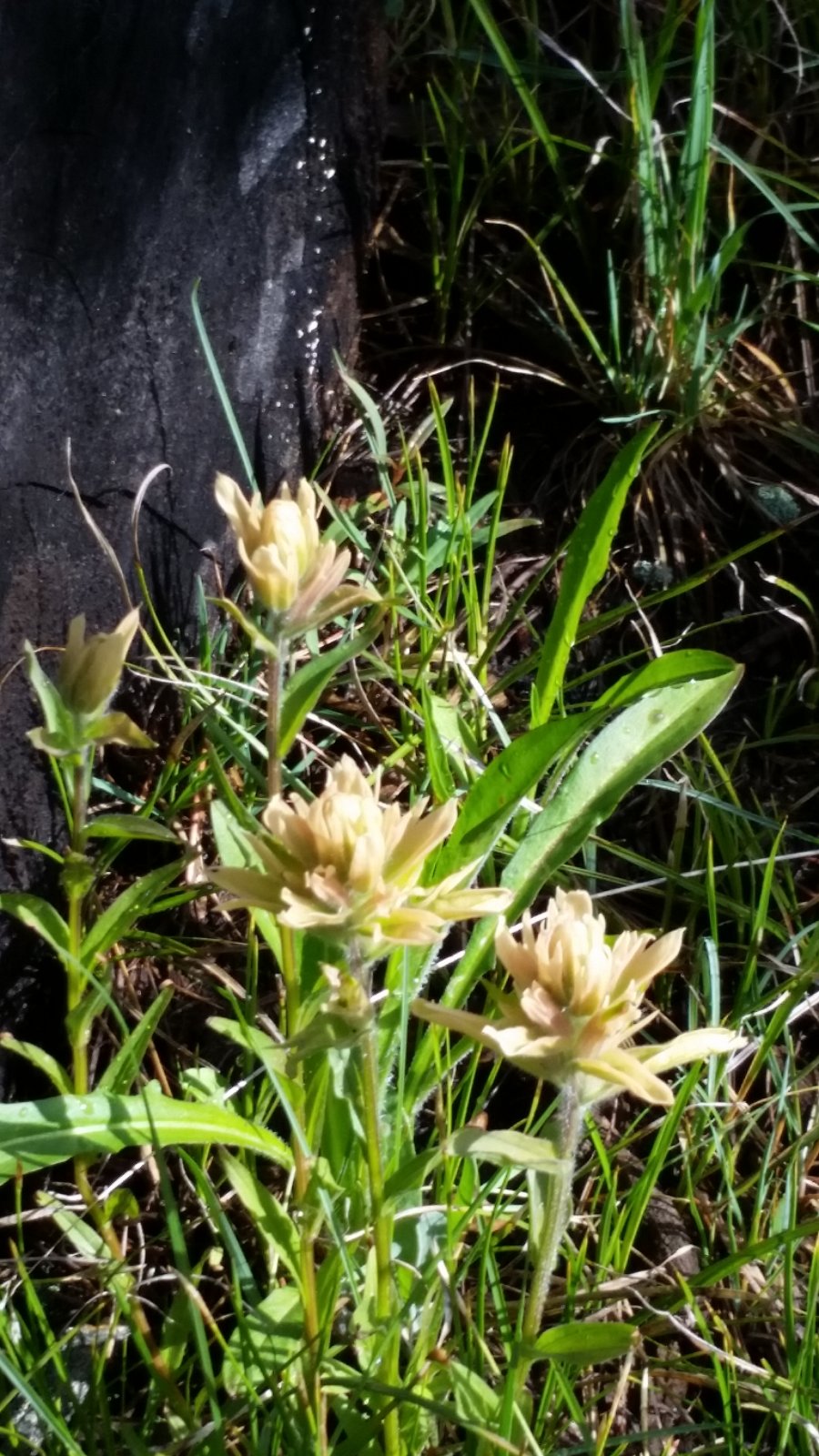 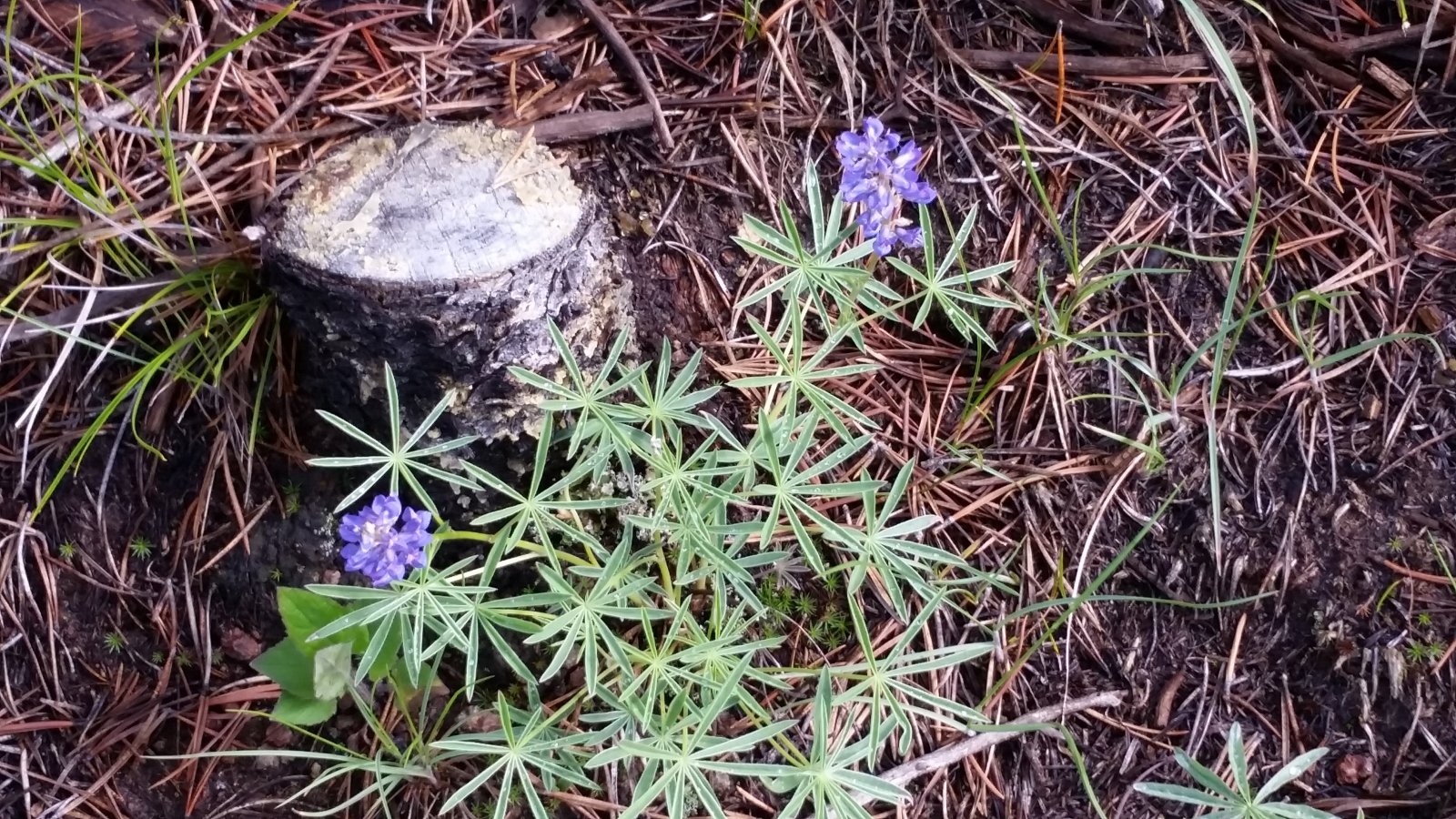 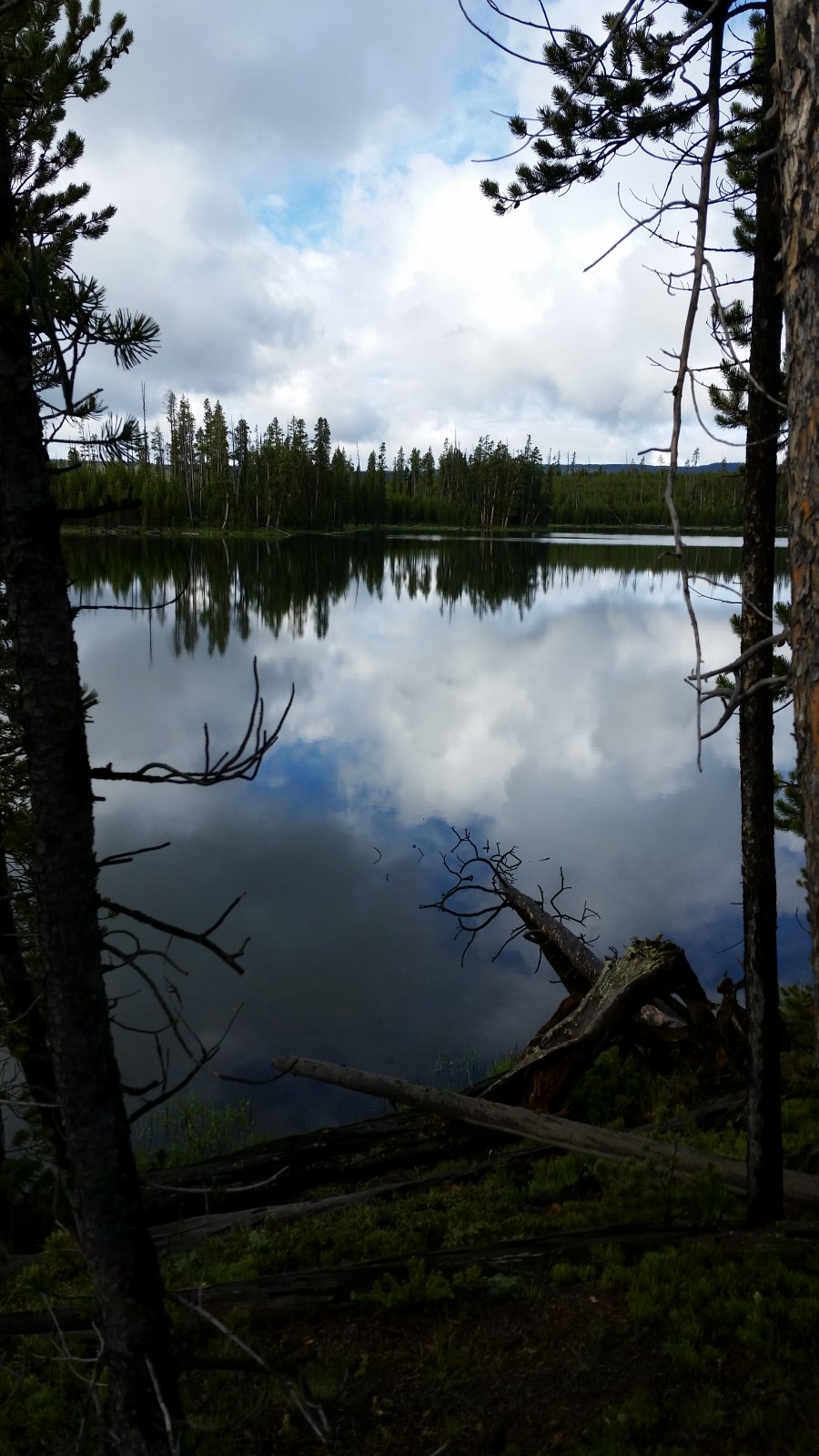 And a final look at the lake.

In short order I was a my car, tinkering with stuff in the trunk. I was no longer a hiker, just a park visitor dressed a little weirdly, and smelling a bit. Those people passing the parking lot in their cars, going zip dang from one point to another, will never guess that I spent the night in a place so beautiful they can't imagine it.
Last edited: Jun 24, 2018

That is some amazing scenery to be surrounded by. Thanks for sharing!

Beautiful and serene. Thanks
P

I'll be staying at the same campsite in mid September. Hopefully the elk will be bugling by then. Enjoyed your report.
P

Oooooh, that'll be GREAT! I'm so jealous... and I was just there. Have a great trip!

Fantastic clouds! Seeing them in the reflection seems extra special!
You must log in or register to reply here.
Similar threads