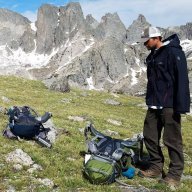 I did this same route last year (minus the day trip to Titcomb) in reverse on the July 4th weekend and had a COMPLETELY different experience then than I had this past weekend.

The trip report for that expedition is here: https://backcountrypost.com/threads/winds-july-1-3-elkhart-hobbs-lester-pass-pole-creek.6951/

I will be referencing last year's trip here mostly because of the stark contrast in my experiences.

thanks @Jackson for the suggestion in your comment from last year to do this in reverse.

My original plan was to hit Titcomb, knapsack col, peak lake, shannon pass, jean lakes, and out but I didn't ever get a good report of the conditions for that route and in truth, I really wanted to see this route again sans snow. Our first day was a late start out of Elkhart and we planned to make it to the Cook Lakes but ended up stopping short due to time constraints. I can not believe the difference in the trail from last year's journey from Eklund Lake to Monument Creek. It was really nice to be able to walk on dirt and not be post holing through massive snow drifts the whole way out. We found a nice little lily pond between the two Pole creek crossings for our first night's camp with a terrific backdop. 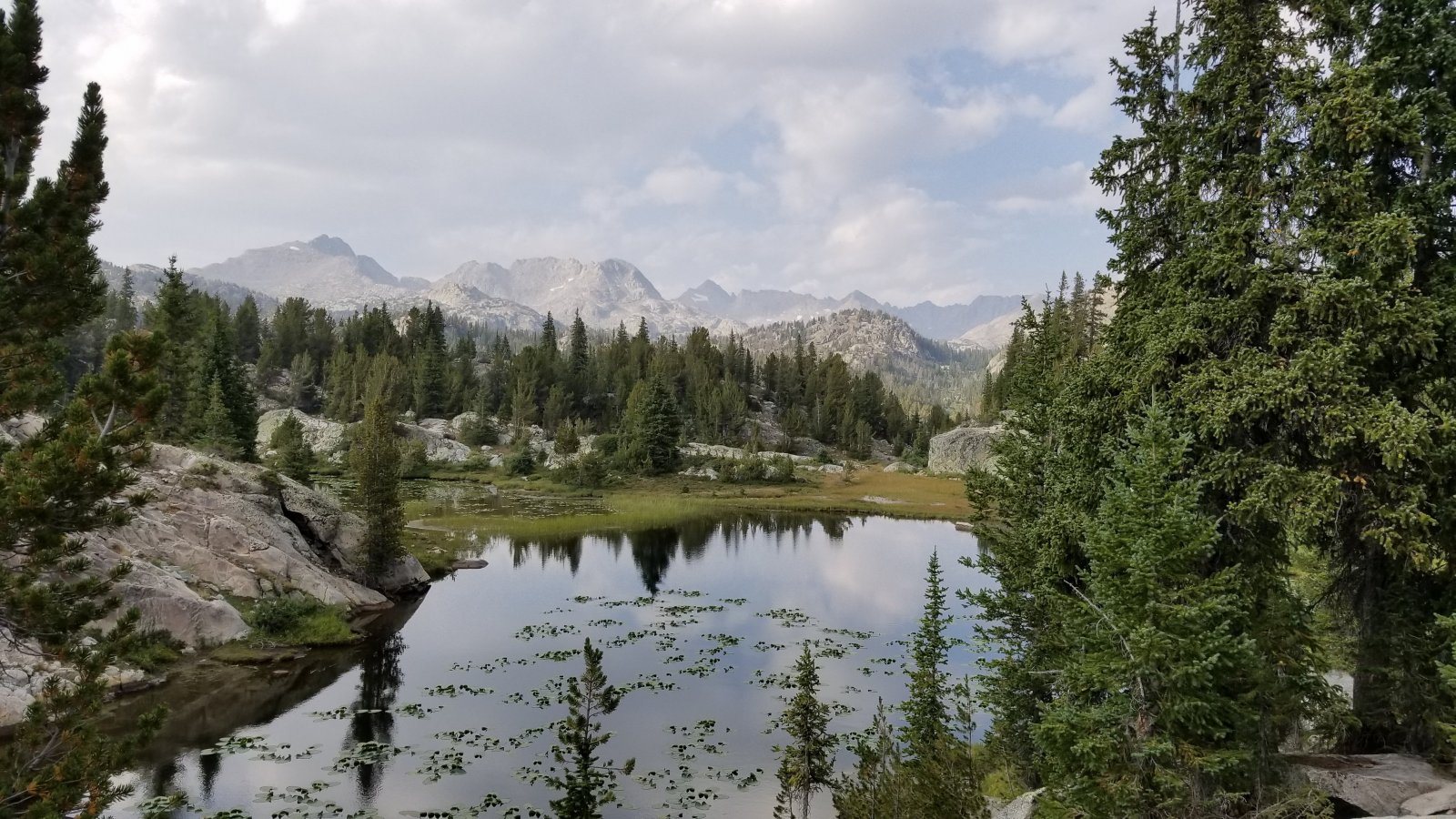 The next morning we climbed Lester Pass and again, my mind was blown by the difference and level of difficulty decrease from last year to this. It was neat seeing all of this terrain blanketed in white, but I'll take these conditions 99 times out of a 100 over trudging through snow and huge fields of snow waves. 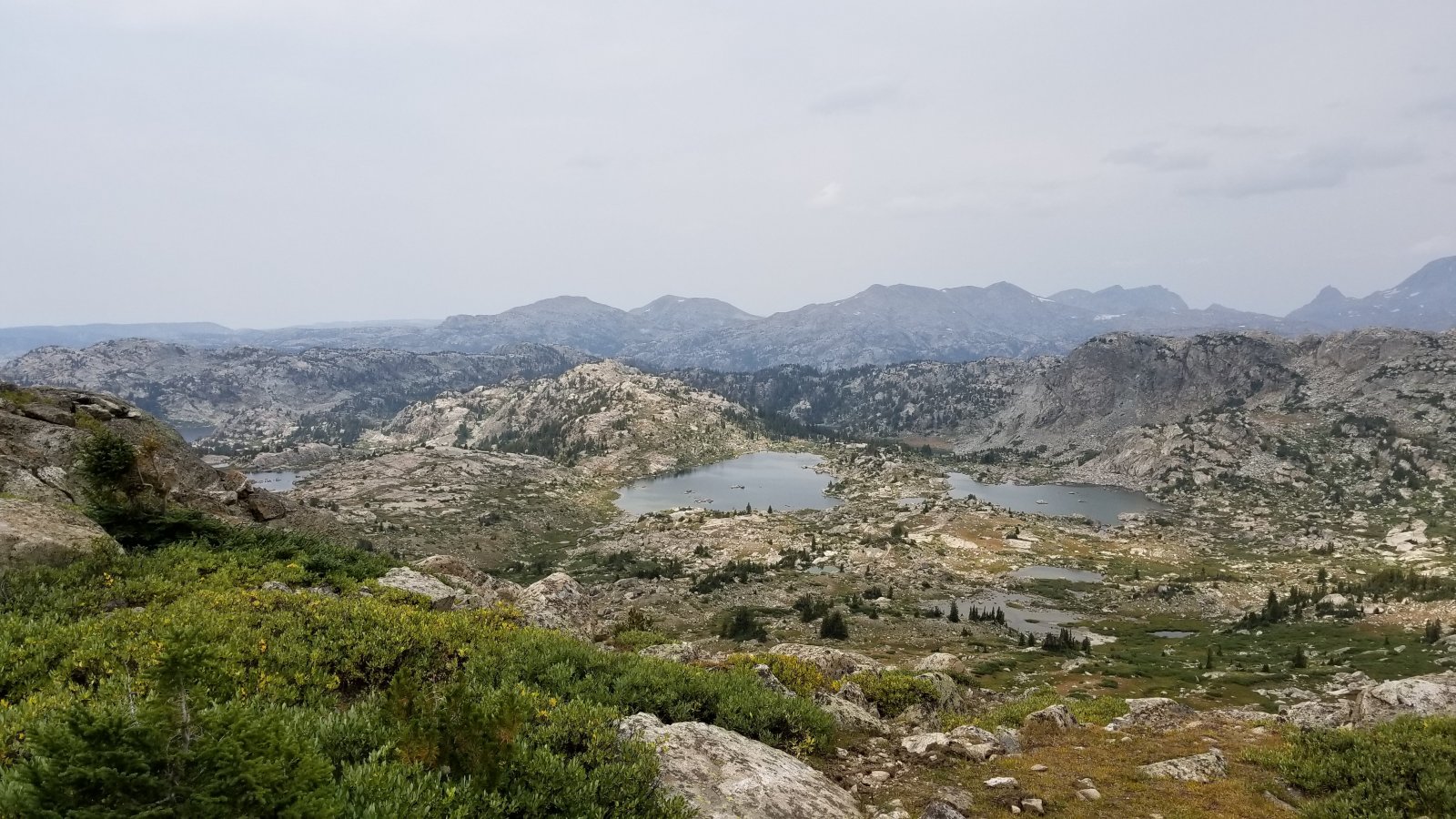 We set up camp at the little lake just above Little Seneca Lake just on the other side of the pass and had our first spit of rain that evening. After the rain stopped, there were some beautiful clouds blanketing the cliff wall to our east. 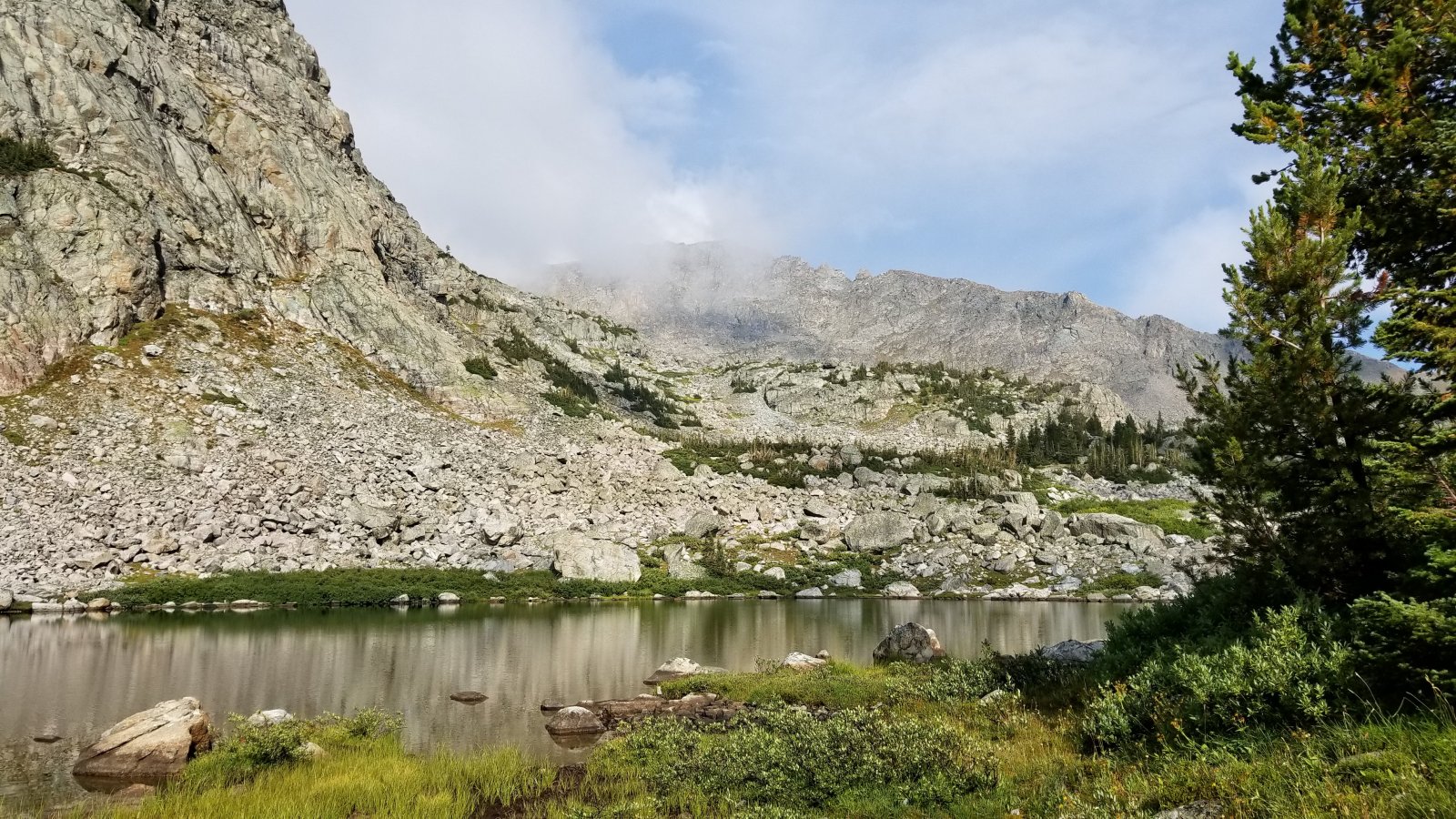 that night I was awakened by a rock slide on the other side of the lake. It sounded a lot bigger than it probably was because of the echos in that small cove area but it certainly got my attention with how loud and impressive it was. The following morning we did a day hike up to Island Lake and Titcomb Basin. This was my 4th trip out of Elkhart and I had never made the journey to Island/Titcomb mostly because I prefer to stay away from the massive hordes of people but I wanted to knock it off my to-do list this trip. I am certainly glad I did. Most of you reading this have probably seen it and probably have these exact same pictures in triplicate, but I was awestruck by the beauty of these areas and can't wait to go back to do my original planned route (titcomb -> knapsack -> peak etc).

Here's Hope taking in the view of Island Lake on the way down: 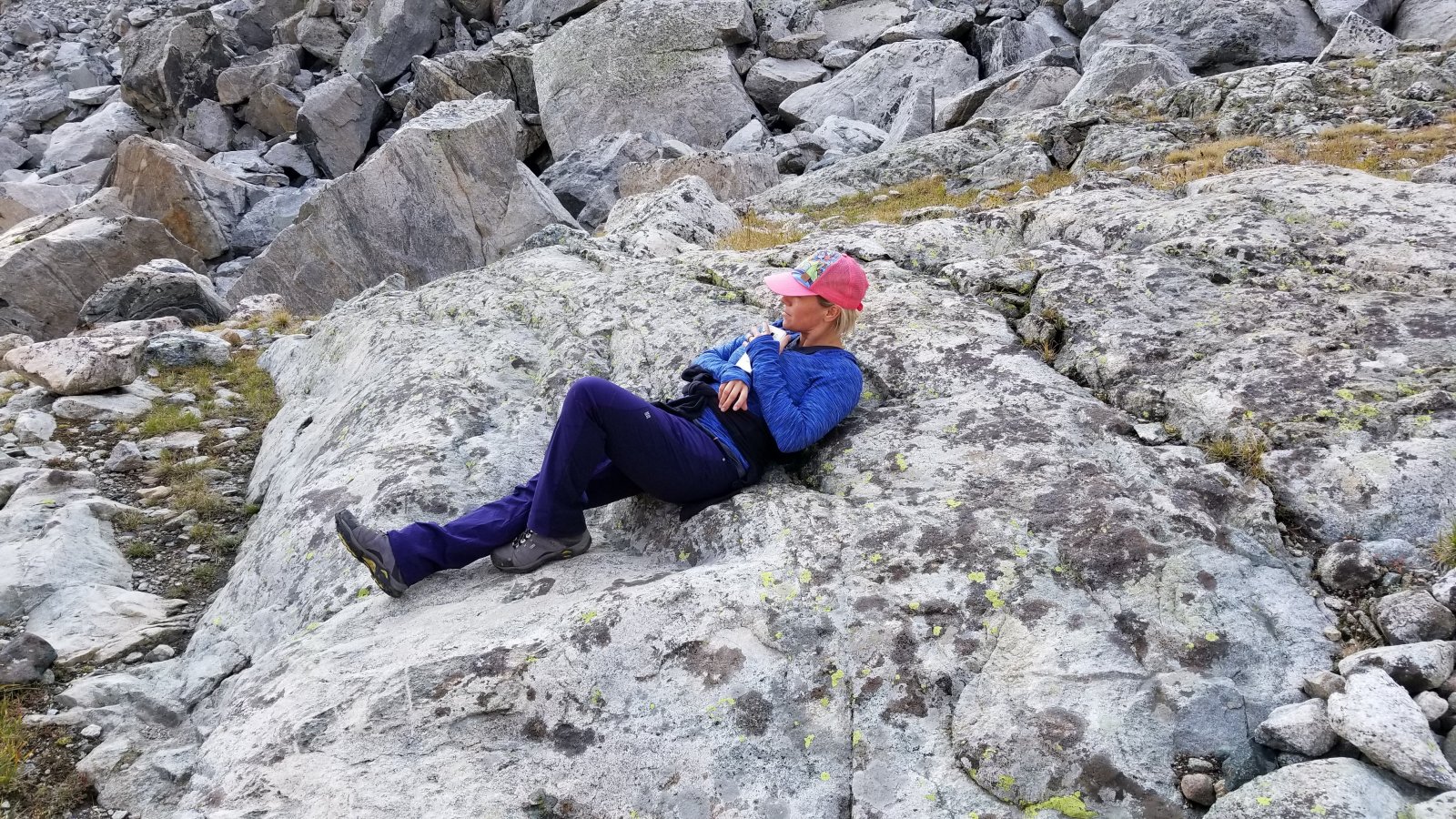 And here's her obligatory pose of her taking a close up of the flora on the way: 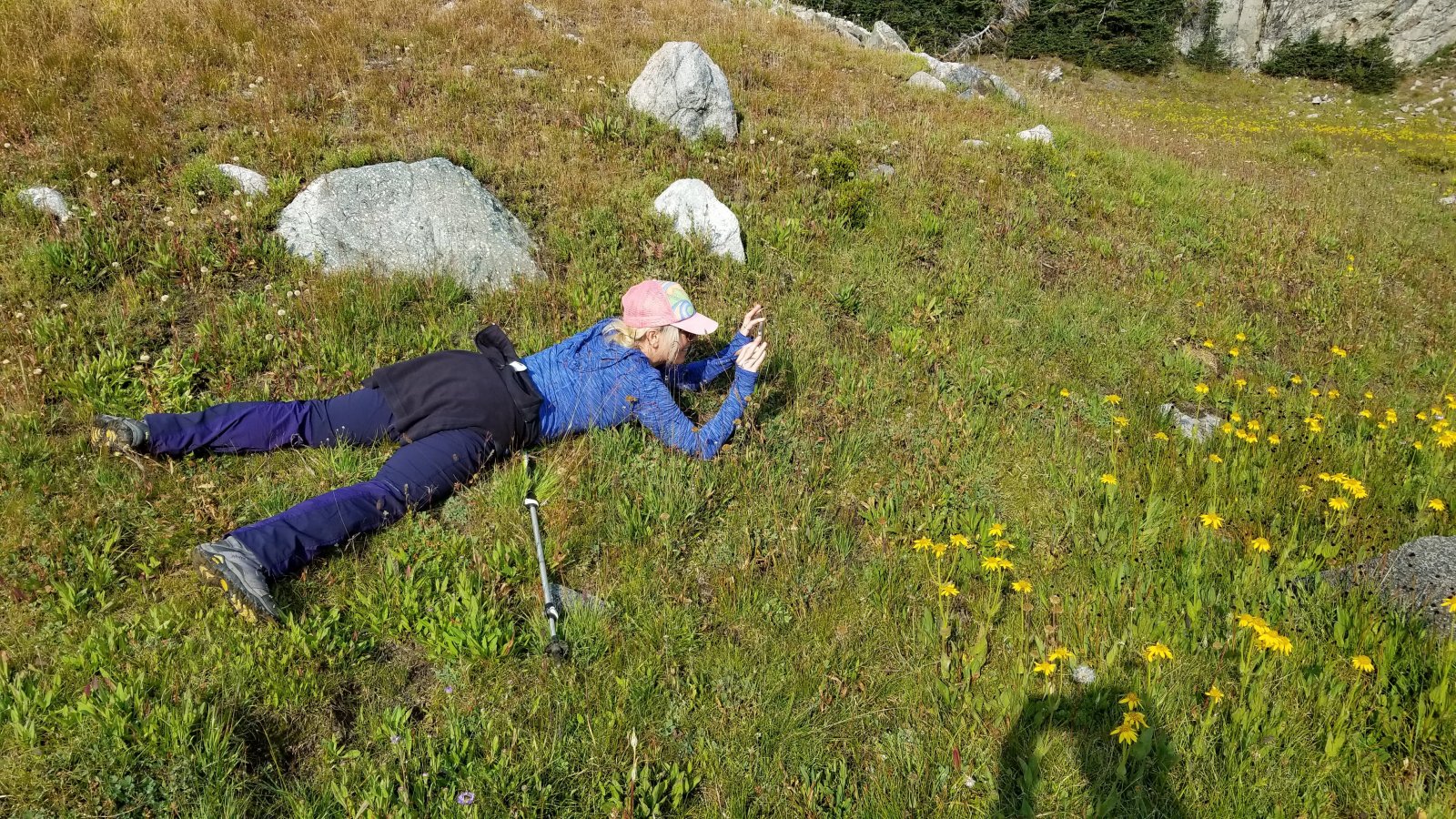 We had a few thunder clouds roll in as we approached Titcomb but they didn't do anything more than threaten. 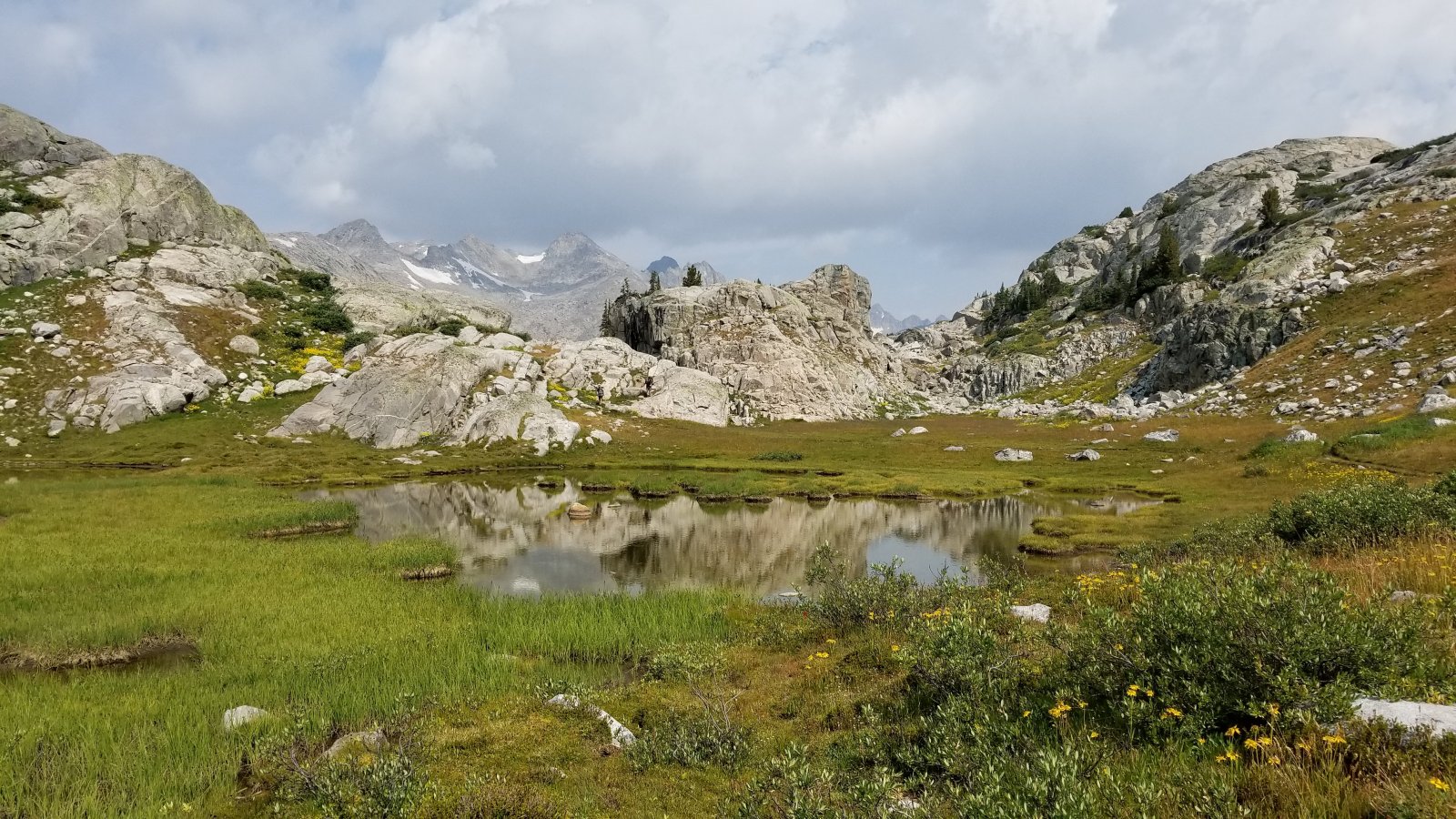 Hope taking the amazing view ahead:

We took some very dear and good friends with us on this trek and it was so great to have them along to share in my first hike to Island/Titcomb. Here's Jeff and Hope at more or less the mouth of the Basin: 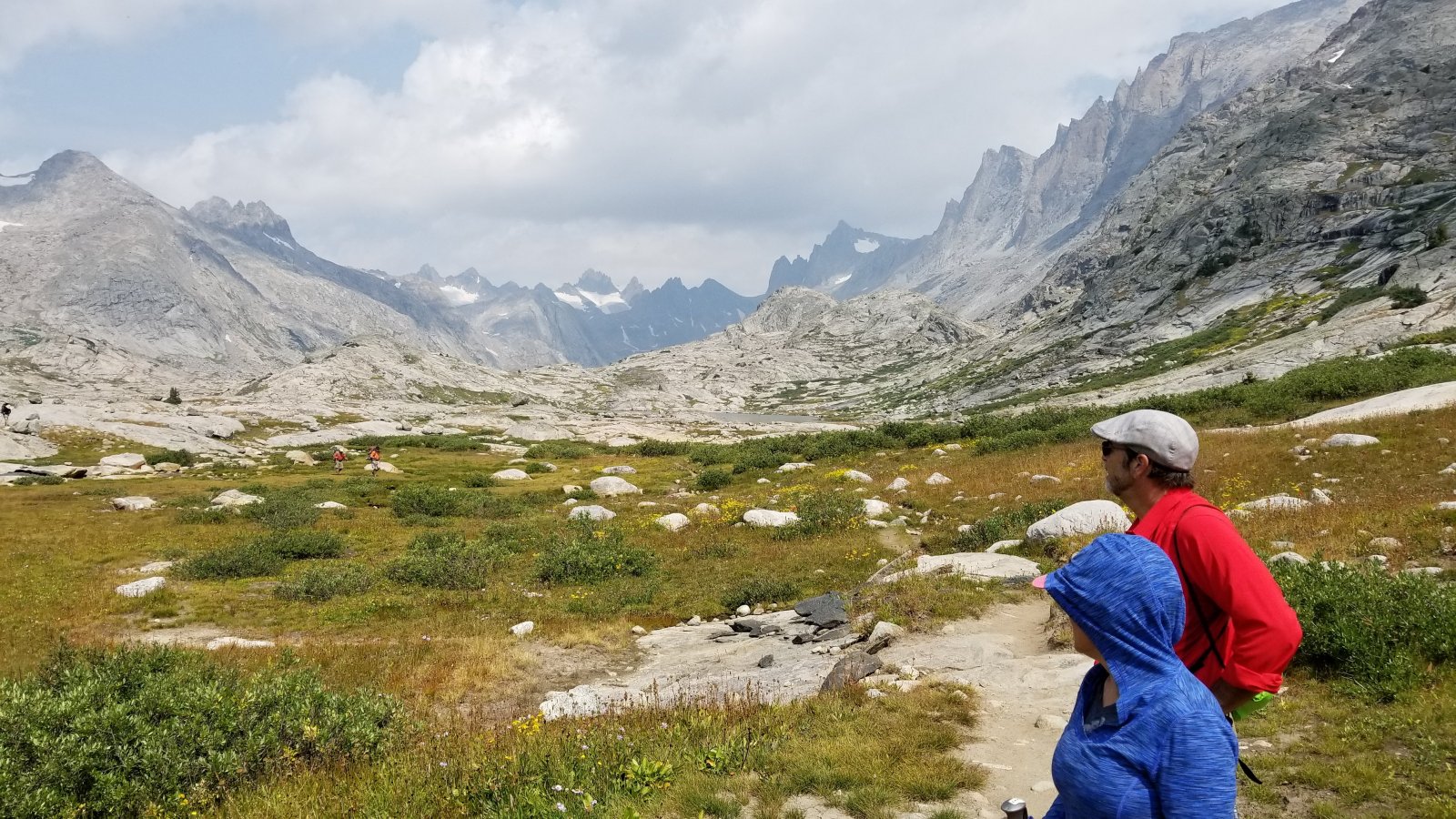 After our day hike up to Titcomb, we returned to the lake above Little Seneca, packed up camp and trekked down to Hobbs for our third night. This picture of Mary and Hope has them holding their hands where we thought the snow line was on the previous year's trek at the same sign. I looked at the picture I took of that sign last year when I got home yesterday and they really weren't far off. I can't not express enough how much different this experience was with the dry conditions compared to last year. 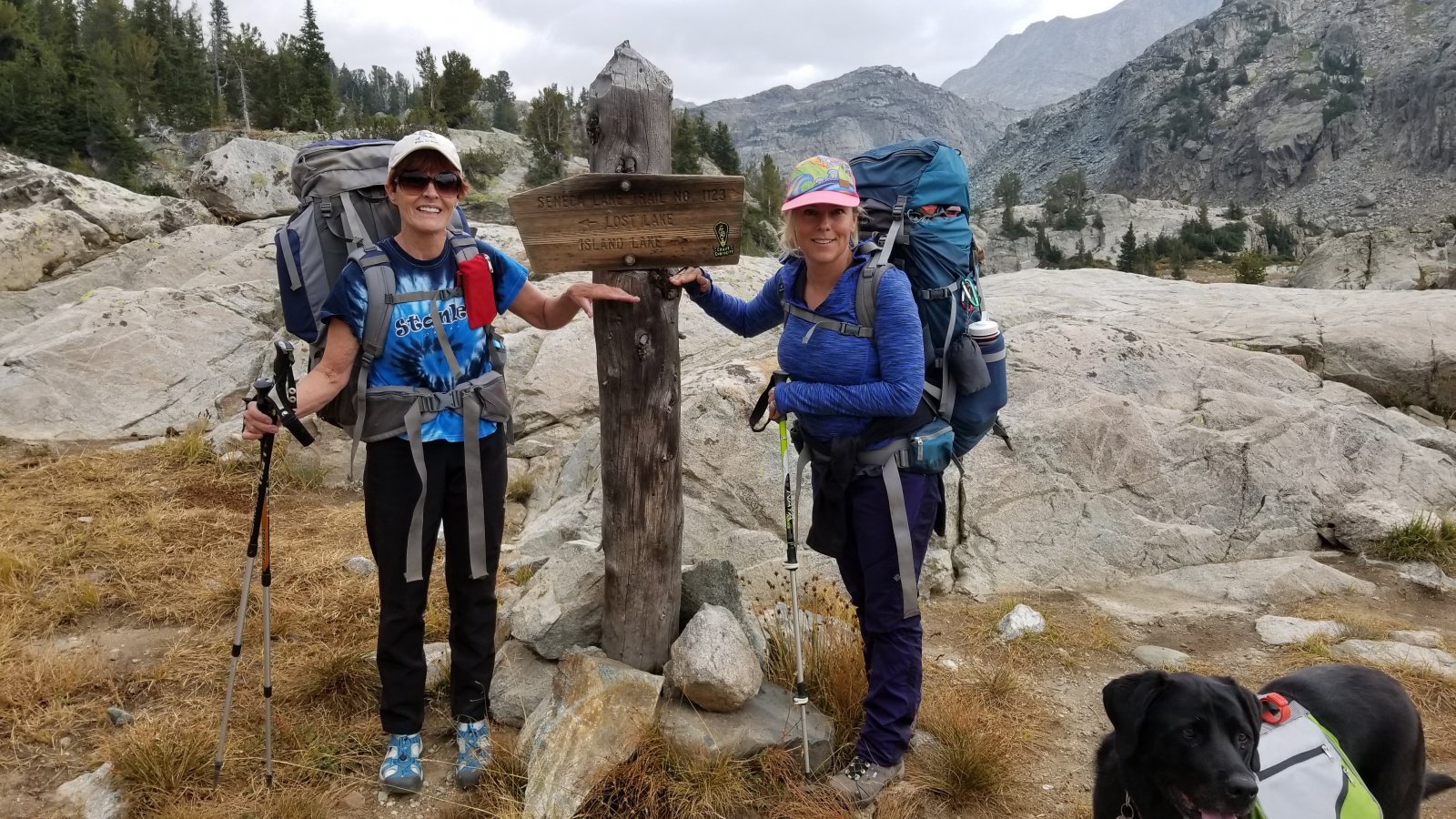 We got a pretty good hail storm the last night at Hobbs and a bit of rain the last two miles on the way out to Elkhart, but beyond that, and the 2nd night's light rain, the weather was spectacular.

Hope was very reluctant to take this trip after the previous two we had taken to the Winds which were both a lot to chew but I"m sure glad she did. Such a great weekend with such great friends up there. Bugs were minimal, trail was pretty busy (as to be expected) on the Seneca side but definitely not overwhelmingly so.

I love the winds and this trip only reinforced that love further.

Here's a link to all of the photos / videos I took of the trip if you're interested: https://photos.app.goo.gl/hiKSFCZrde3DExrP7 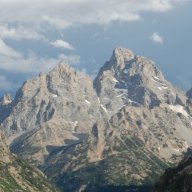 I think my dad and I ran into you guys soon after leaving Hobbs (you got my dad interested in the Jean/Elbow Lake loop) and again at the Brewing Co in Pinedale! Were you able to rock-hop across Pole Creek or did you have to ford?

DanielleL said:
I think my dad and I ran into you guys soon after leaving Hobbs (you got my dad interested in the Jean/Elbow Lake loop) and again at the Brewing Co in Pinedale! Were you able to rock-hop across Pole Creek or did you have to ford?
Click to expand...

Hey there! Yes I remember you. We had to ford it at both crossings but it was a piece of cake this year compared to last year when it was truly impossible. 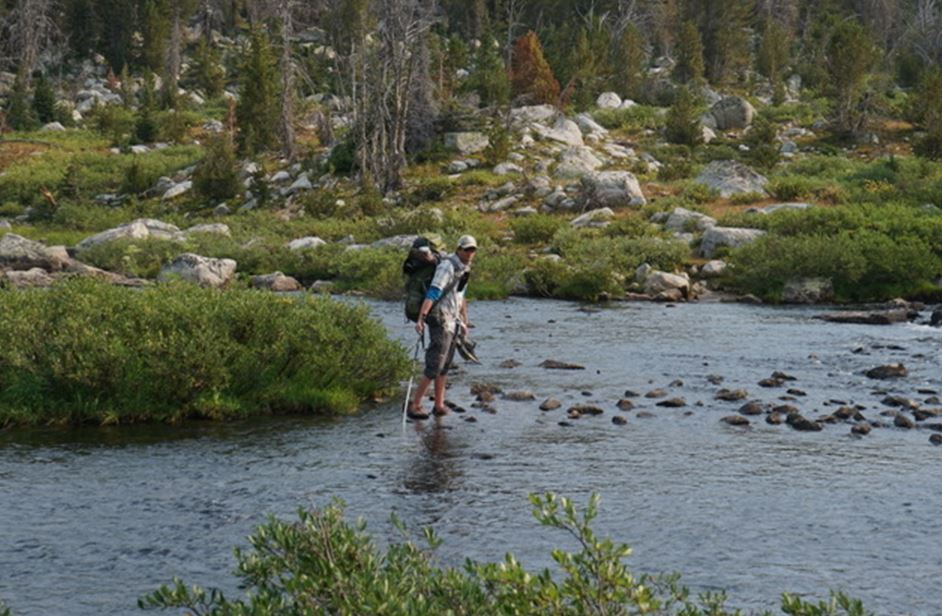 and here's a link to a short video of Jeff and Mary crossing.
https://photos.app.goo.gl/kncffNnQTqEmY4Sv7

Let me know if you want more info on the Jean / Elbow lakes route. It was definitely awesome but that last day (all the way from Summit Lake back to Elkhart) was a bit of a grind. Before we dropped into that last canyon and had a really hard climb out, is one of the most spectacular views/vistas I've ever seen.

Nice! Thanks for posting!
IG: @backcountrypost

Awesome. I'm doing a similar route next week (but clockwise) so this was cool to whet my appetite! I'm like you...I don't like the hoards so I've never been to Titcomb (even though I have many Winds trips under my belt). But, my friends REALLY want to do it so off we go. We also considered doing a route over Knapsack. But we never got a good report on conditions and I didn't want to spend that much time above treeline.

I'm curious to go back and look at your pics from last year to compare the snow.

Thanks for the trip report.

Mike K said:
Awesome. I'm doing a similar route next week (but clockwise) so this was cool to whet my appetite! I'm like you...I don't like the hoards so I've never been to Titcomb (even though I have many Winds trips under my belt). But, my friends REALLY want to do it so off we go. We also considered doing a route over Knapsack. But we never got a good report on conditions and I didn't want to spend that much time above treeline.

I'm curious to go back and look at your pics from last year to compare the snow.

As for going to Island Lake and Titcomb, you won't be sorry. There's a good reason it's so popular. It's not something I need to do every trip certainly, but it really is something to behold... you'll be very glad you did after you go.

FWIW, we ran into a guy who had come from Peak lake over Knapsack and said it was pretty smooth sailing. Not trying to alter your route cause it's a spectacular route, but I saw your post before we left on our trip (and you actually responded in mine when I was trying to get a condition report) so if that's still on your radar, it definitely is doable.

Here's a direct link to the pictures and videos from last year. Pretty amazing to see the difference. Have a wonderful trip wherever you decide to go. Please let me know when you return how things turned out.

Yeah, I'm sure you're right - I won't be sorry. And I appreciate your words of encouragement. It sounds like you and I have the same sentiments about popular areas. I've actually peeked up into the basin from the trail after completing a loop over Indian Pass one year. But, we were too wiped to go and check it out. Hopefully, we'll be fresh and excited this time.

(Now that you mention it, I remember the thread where you asked for some information on Knapsack). Thanks for the info regarding Knapsack. Who knows, we may try that route after all.

I checked out your previous year pics earlier. Huge difference!

Looks like an awesome trip! Has me wanting to get back there, especially after a lackluster backpacking season for me.

Had to be wonderful without all the snow of your trip last year.
You must log in or register to reply here.
Similar threads