Having just spent 4 days backpacking the Unitas and only having 3 days to get ready for this trip I almost bagged it and didn't go. Luckily for me, my buddy was going and I knew he'd back out if I did as he didn't know most of the others that well. So I went and was very glad!

This was my first trip to Big Sandy. It was a short quick trip, but lots of fun. It was also the largest group I'd ever been in with before or since. I think we had about 15 of us! I was really worried about having so many people as I'm apposed to crowds and large groups, but it ended up being quite fun!

8-13
This was going to be my friend Alan's first backpacking trip, other than a quick overnighter into White Pine Lake in the Cache. We decided to take off before the rest of the group so we could take our time hiking in. We left Logan around 9 or so in the morning. This would give us plenty of time as the others where leaving at noon (they ended up not leaving until 1 or 2). We drove over to Big Piney, picked up our fishing licenses and grabbed some grub and heading for the trail head. Having never been into Big Sandy I missed a few turns, but quickly realized it and we made good time. The roads were in really good shape almost the whole way, which was good as I was driving my car.

We parked the car and off we went! We made good time to Big Sandy as the trail was one of the easiest backpacking trails I've hiked. The rest of the group made it in just as it was getting dark. We ended up camping on a bench just above Big Sandy Lake. The area was plenty big to accommodate us all with plenty of room to space out tents to avoid the snorers! 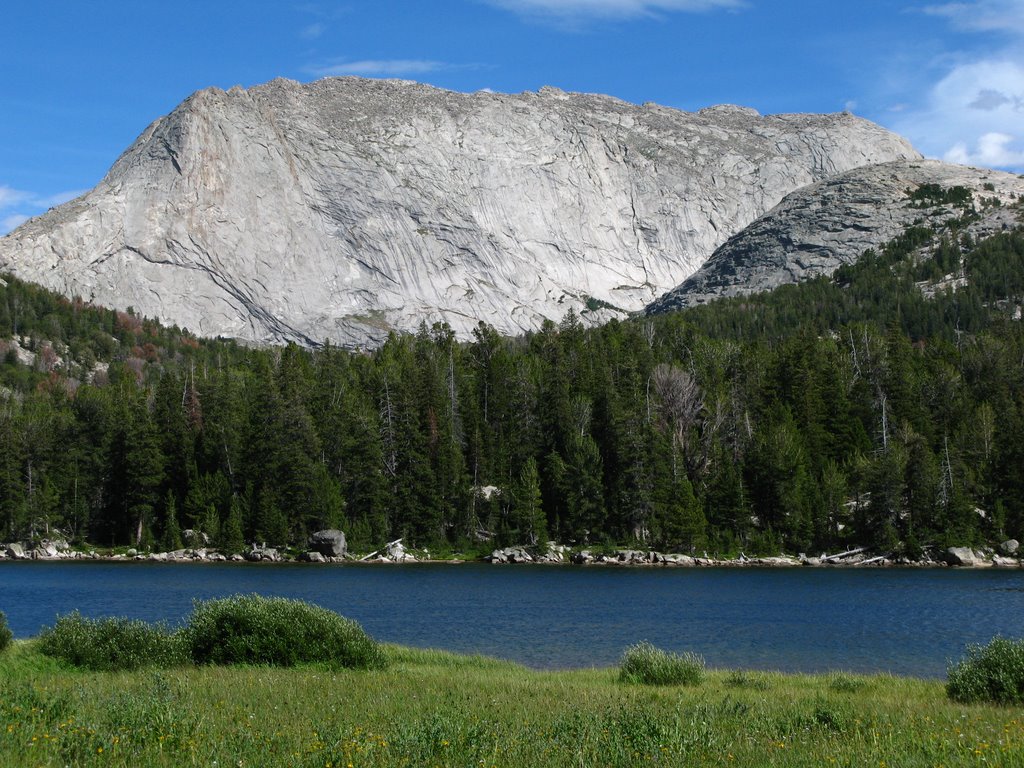 The wild flowers were the best I have ever seen them this year! 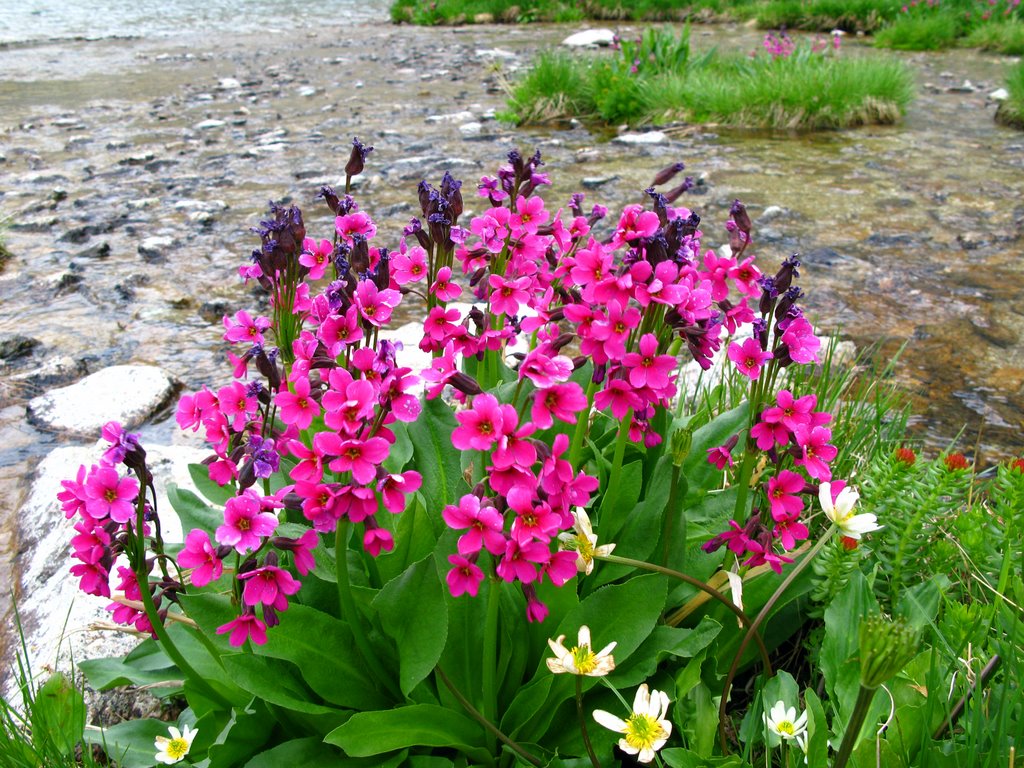 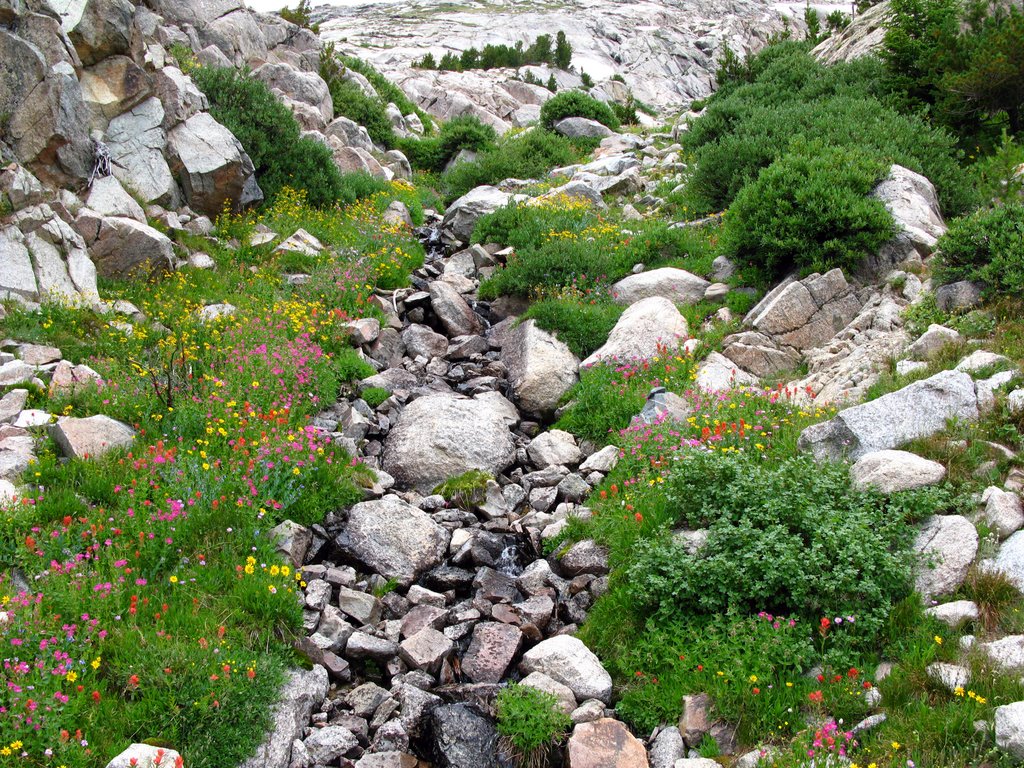 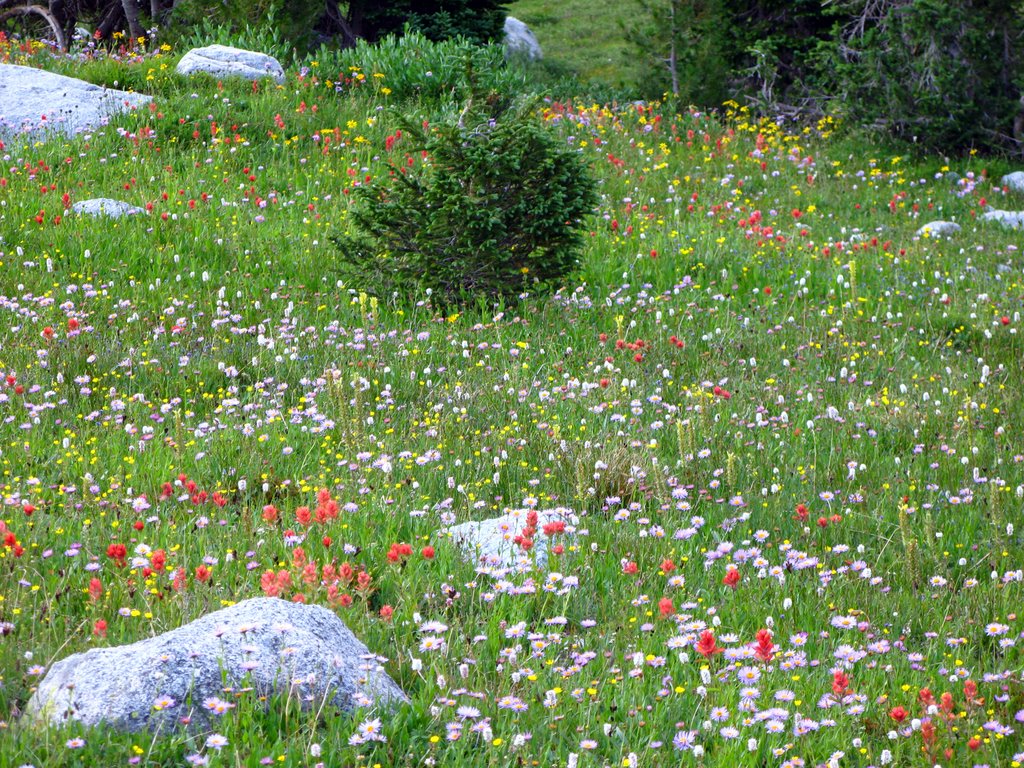 8-14
The next morning we all headed out, in small groups, each to the place they wanted to go. This was the fun part of having so many at our camp. We could each go do our own thing and there was always someone else who wanted to do the same thing as you. This way you didn't worry about someone be out on their own and getting into trouble.

Some of us heading over to one of the lakes in the area and started fishing! The two guys in the photo are quite competitive and always try and out fish the other! It's quite comical! 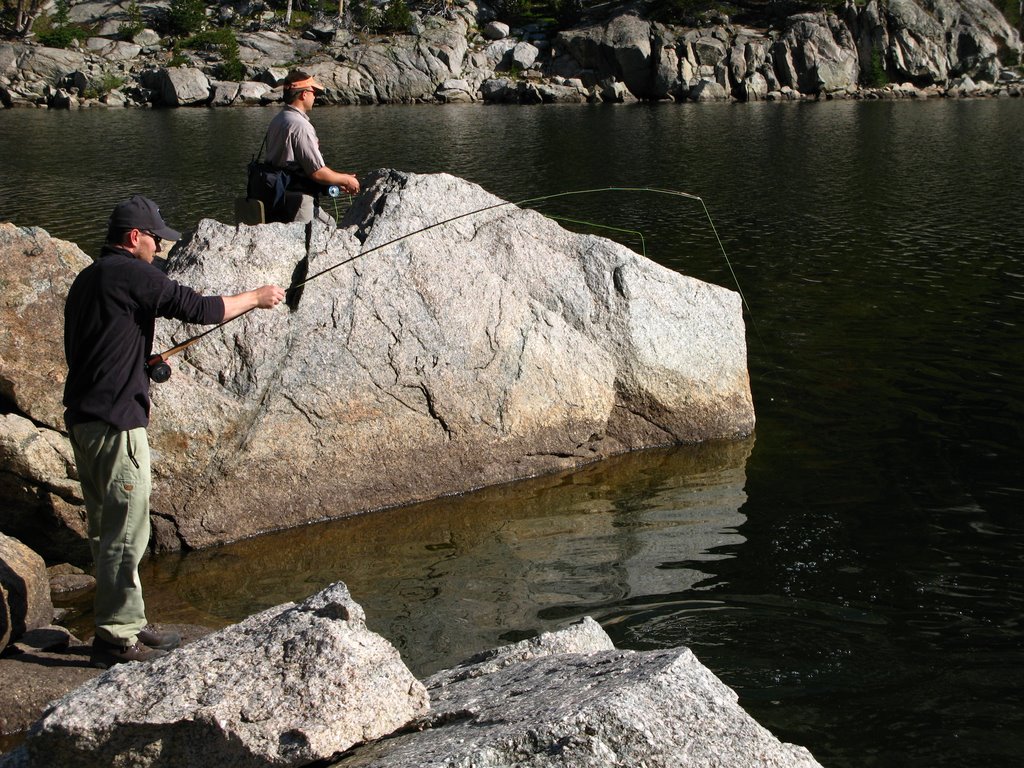 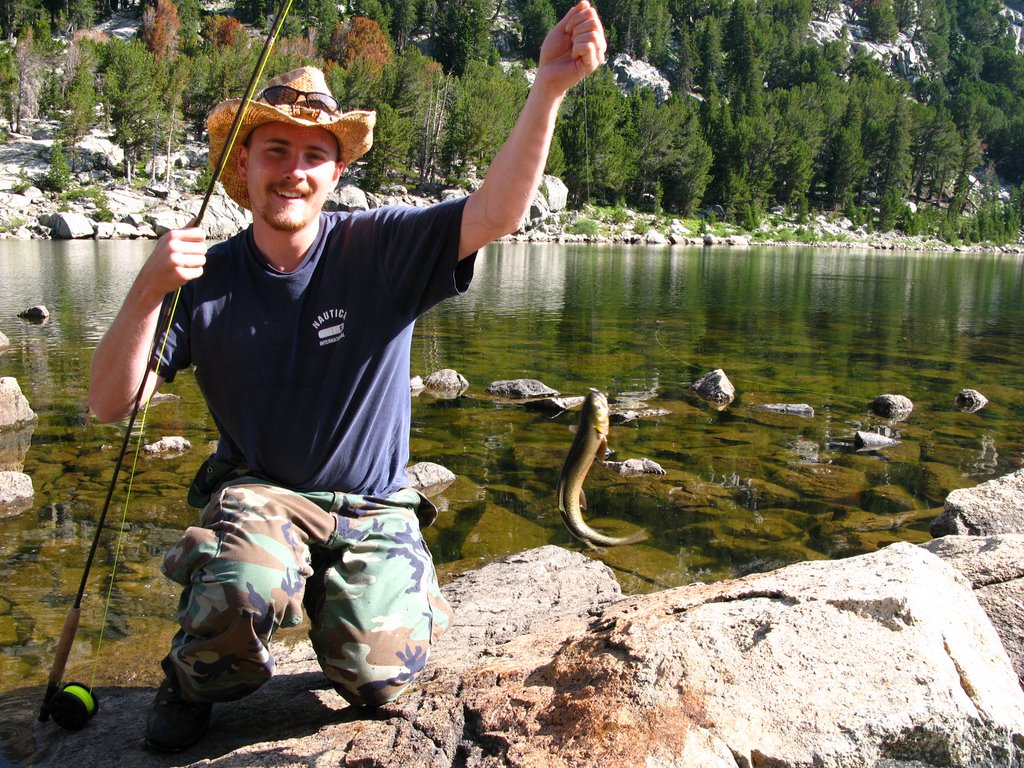 Darrin was going across a big boulder next to the lake when he slipped and fell in! The funny thing is, is that not 5 seconds before he told another to be careful the rock is slick! Luckily it was a nice warm day and he dried out quickly! 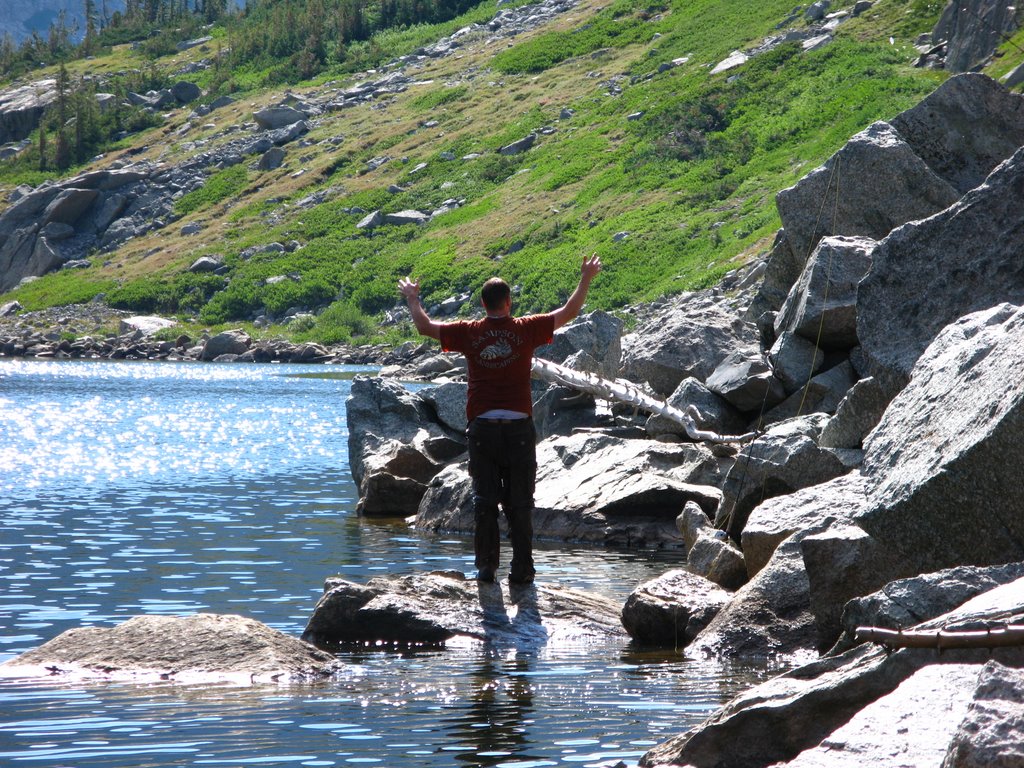 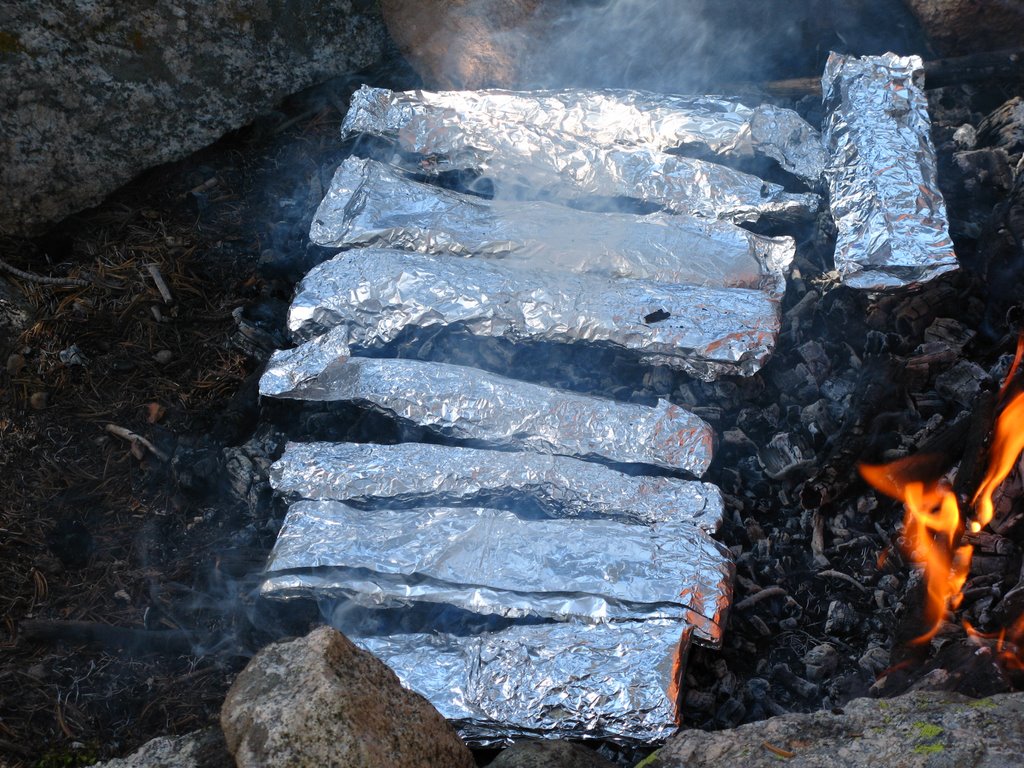 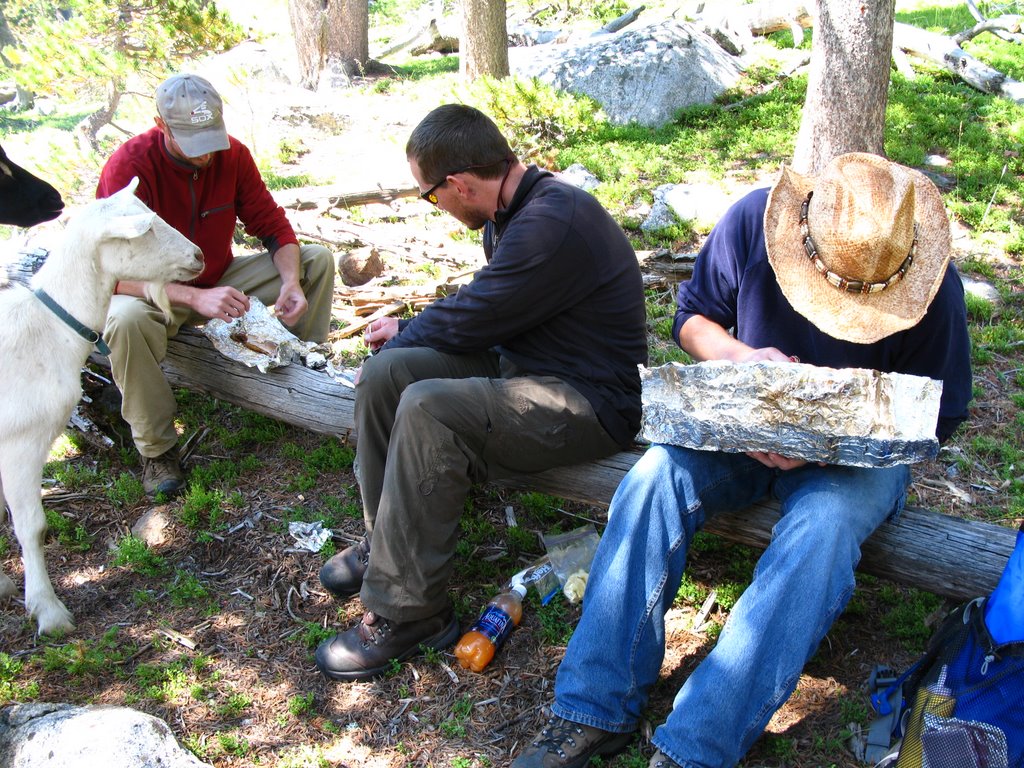 Fishing with goats! The goats where actually a blast to watch! You'd like, how are they going to get through that! Then they'd hop right over/around/through the boulders and trees so much quicker than you! They were very tame and followed the owner around like a dog would. One day, Lee, the owner of the goats, was out fishing on the edge of a lake. Lee was standing on a big rock a few feet into the lake and one of the goats jumped up there next to him and almost knocked Lee in! 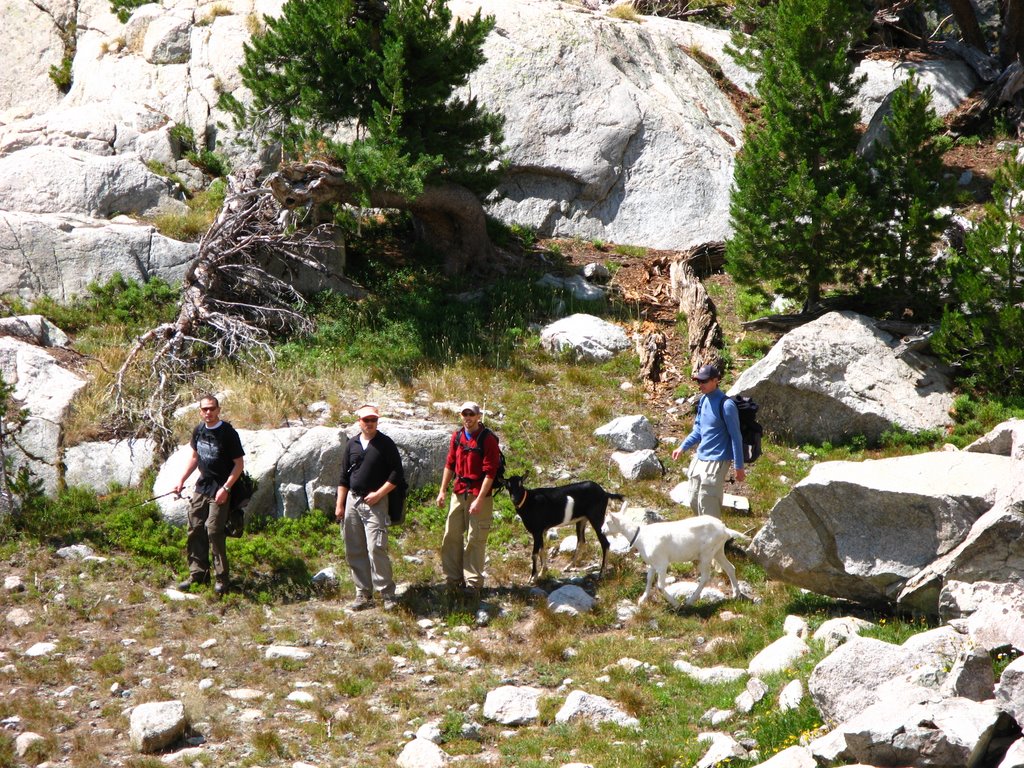 8-15
The next morning we woke up to rain that quickly turned to snow. After eating breakfast the weather cleared up and we all took off in various directions. Alan and I hiked up to Rapid Lake to check it out. All day long the snow kept coming in and then the sun would come out and warm things up and then the snow would come back in. It did this all day until evening. We ended up staying around rapid and building a fire to keep warm most of the day.

Rapid Lake during a sunny break in the weather 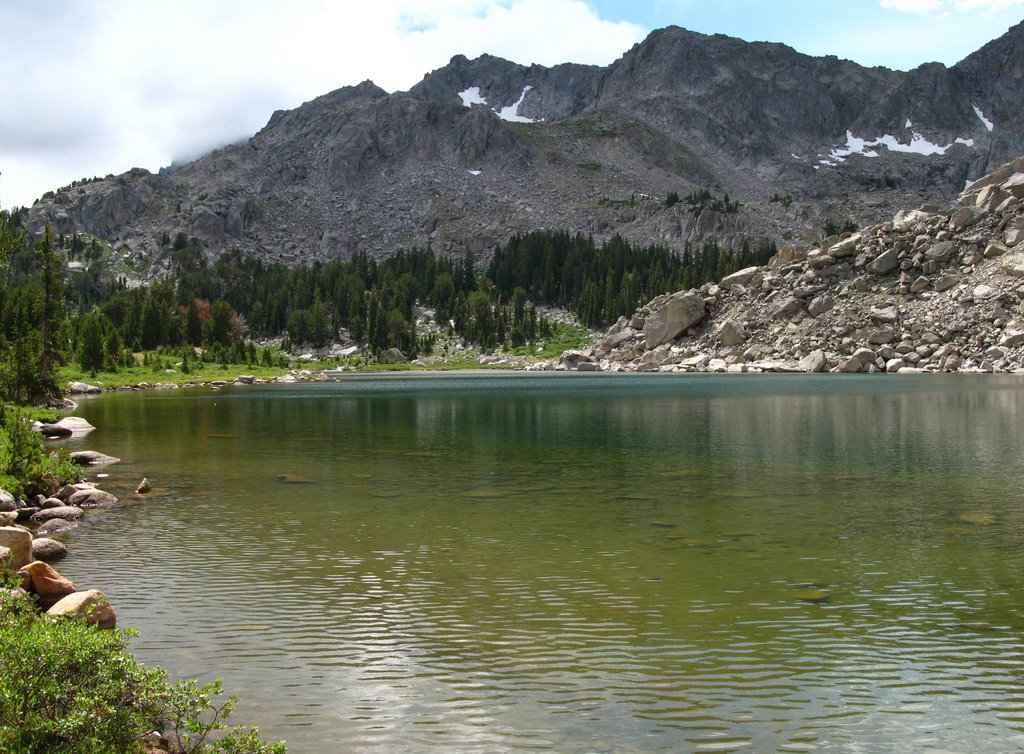 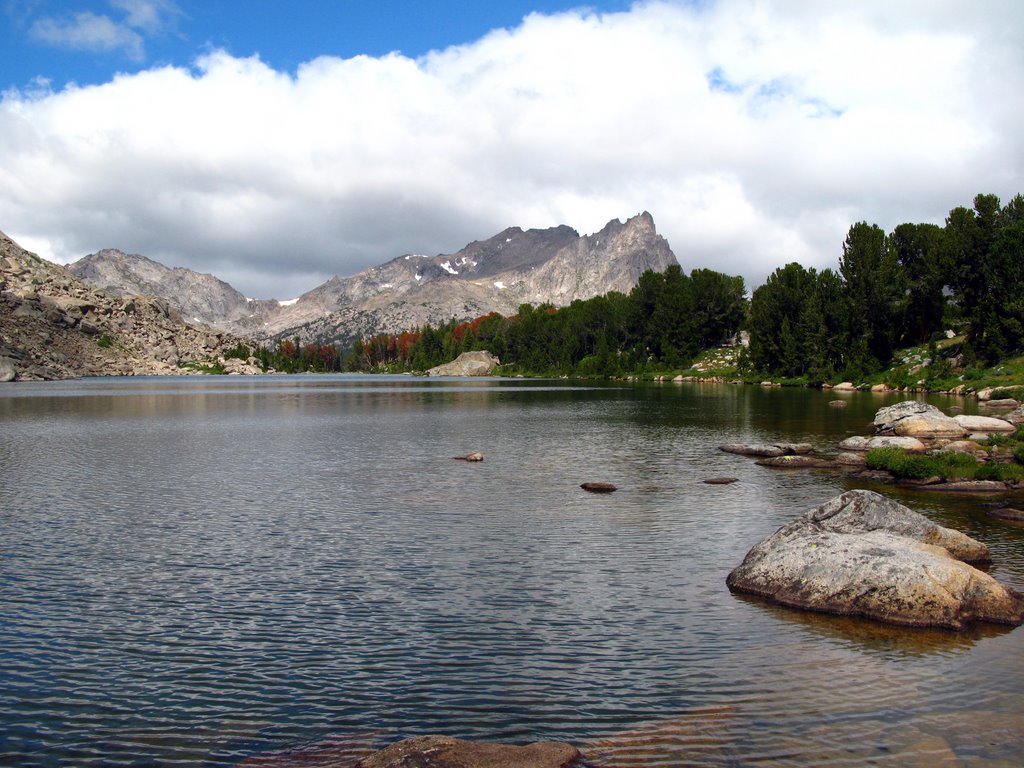 Alan fishing Rapid Lake - It was harder NOT to catch a fish than to catch one! All were very small though. 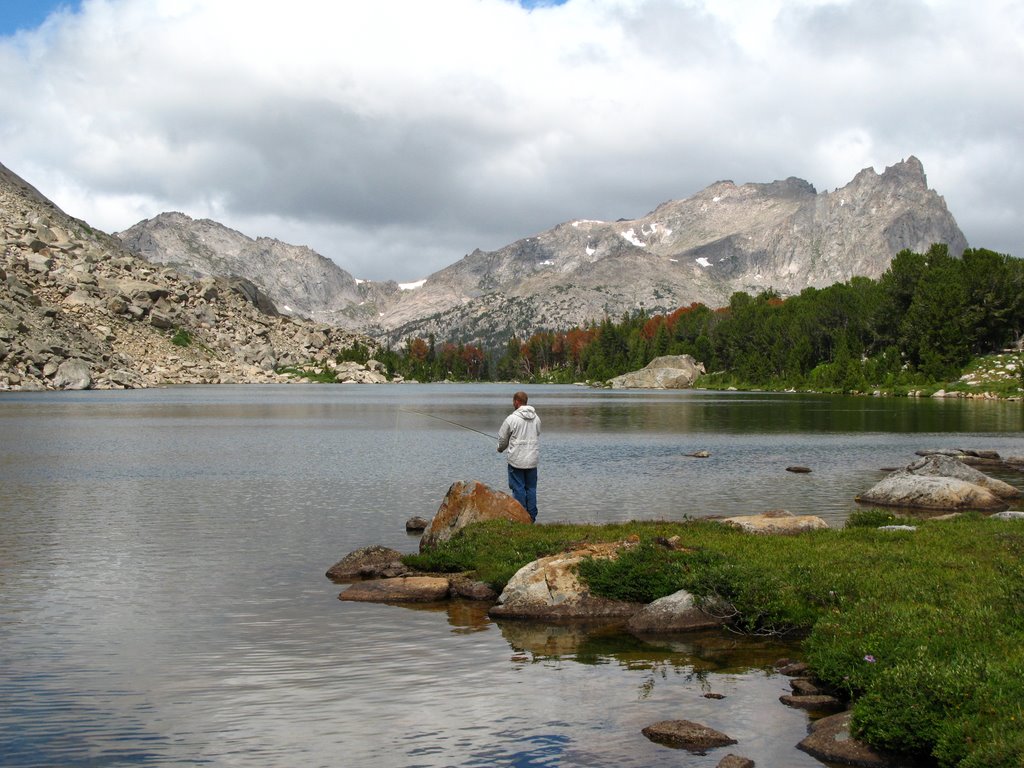 Storm in the Cirque from Rapid Lake 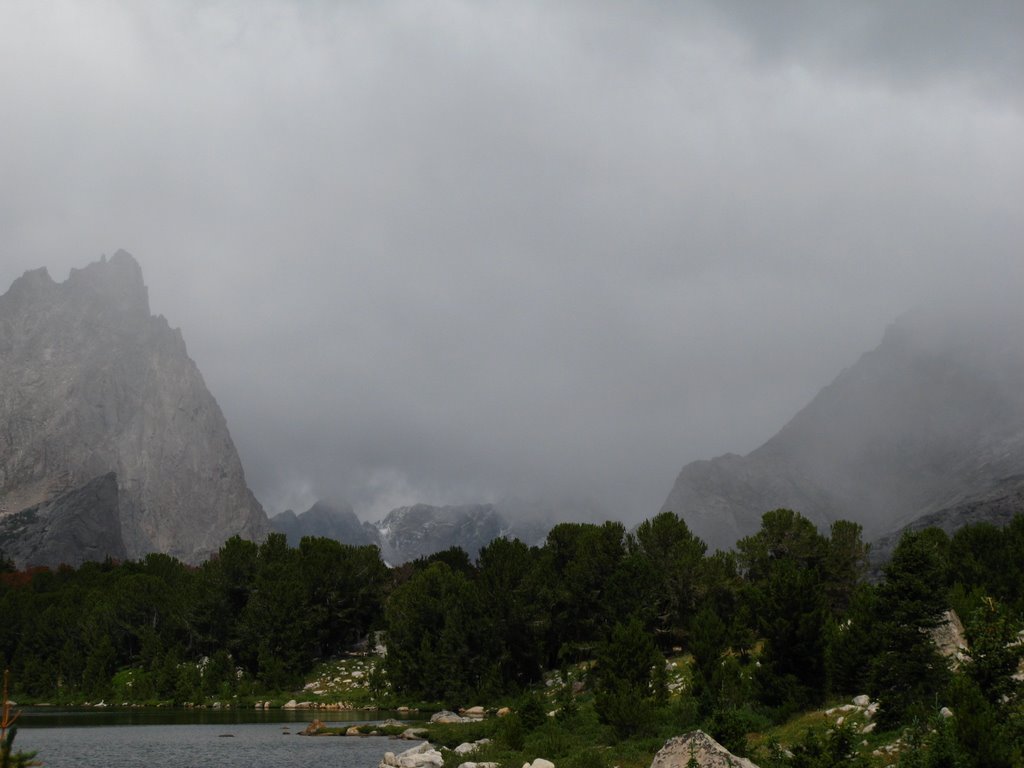 That evening we had a nice sunset 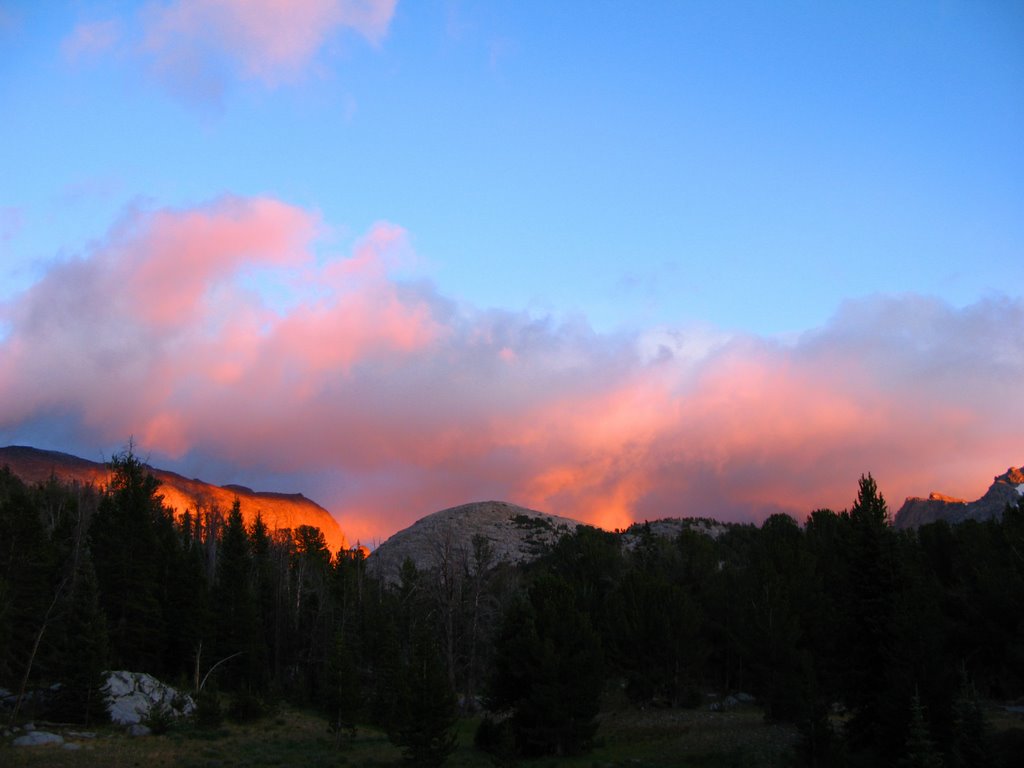 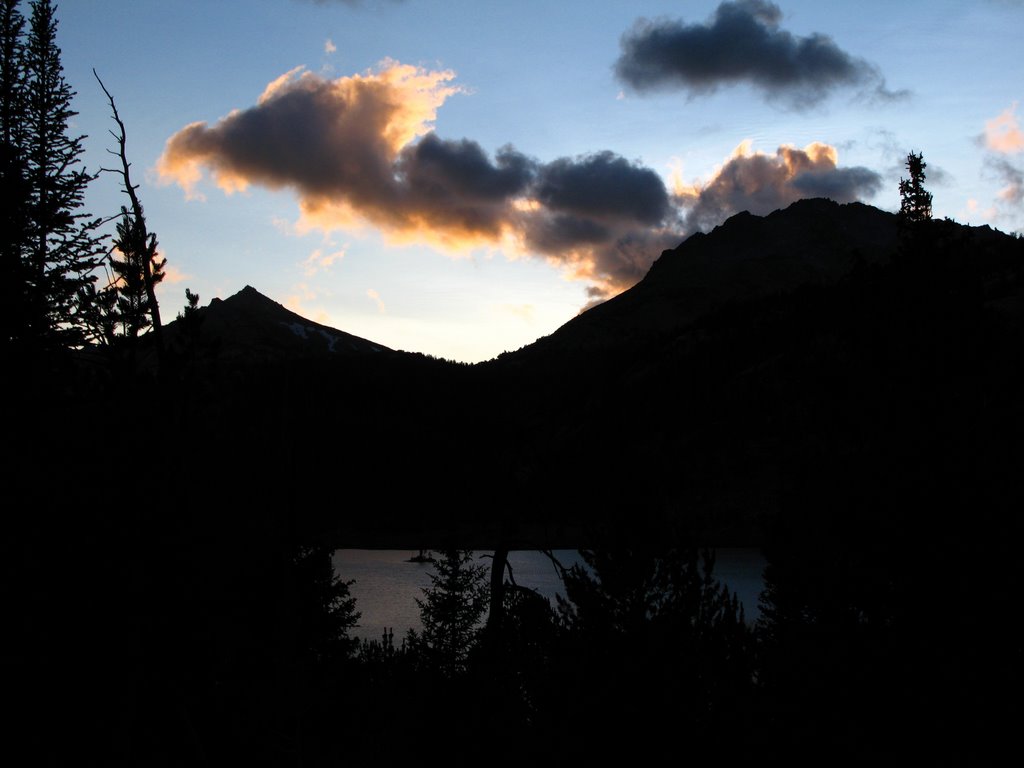 8-16
The next morning we packed up and headed out. We made it to the trail head in good time. We headed to Big Piney for some greasy burgers and then home!!!
“We don't stop hiking because we grow old - we grow old because we stop hiking”
― Finis Mitchell

I need to get me a couple of pack goats! Nice pictures. All of those flowers look amazing.
Hamblin Photography

Awesomeness. A couple of goats would be so nice sometimes...
IG: @backcountrypost

Deadeye008 said:
I need to get me a couple of pack goats! Nice pictures. All of those flowers look amazing.
Click to expand...

A good friend with goats is even better!!! Just like being friends with a boat owner is better than owning a boat! ha ha!

Cool thing is, my buddy who I go backpacking with the most bought these goats and a 3rd goat from the owner last summer!! He's going to charge me $2/lb to put any of my items on them....
“We don't stop hiking because we grow old - we grow old because we stop hiking”
― Finis Mitchell
You must log in or register to reply here.
Similar threads