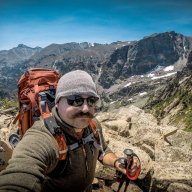 I am looking for a bit of weather report for the Wind River Range for the end of September.

I have a extended trip planned for fly fishing and backing packing across Wyoming that will culminate in the Wind River Range. I have schedule to do a 3 day backpacking trip in the last week of September of this year to cap off a trip of 4 ranges. I am looking for any advice on what the potential snow conditions may be.

I am planning on heading into the range from the Trails End campsite and heading to Island Lake, and then Titcomb Basin. I am not a novice to high altitude backpacking, but will be taking my Father who is.

I am anticipating that night time temps will be in the 20s, and days to get into the 60s. I have all of the necessary gear to deal with these temp swings, but I do not have deep snow gear. Should I look into obtaining snow shoes or other deep snow gear. Any advice from those that know the area at that time of year is much appreciated.

There are others with more experience there than me, and they'll chime in too, but I would think that there's a 95-99% chance you won't need snowshoes. But then there's probably a pretty decent chance that you'll get snowed on at least once. Definitely plan on it happening so you go prepared.

I'd also be prepared for temperatures a bit colder than you expect. My first trip to the Winds was in early August, and one of our nights got down to 20 degrees at Barbara Lake. Not saying that's common, but it really can be quite variable out there, especially later in the season when you'll be there.

All of that said, though, late September will be an awesome time to be there. You'll encounter far less people than if you were going in late July or August.

Snow ice and rain anytime especially Sept...... Just how much you want to fight it.....farther into Sept better the chance of it
' Not All Who Wander Are Lost '

I was in Titcomb late Sept last year with no problems but like Bob says you're rolling the dice at that time. Check weather which should be good for a few days out anyway. Some years mid-to-late Sept have had a foot of snow. Luckily I was out of the backcountry then. Last year got hit with light snow and heavy winds near Deep Ck L. It was 70 and sunny at the trailhead when we exited. I wouldn't take snowshoes on that section, but make certain you can either hunker down for a possible quick melt, or be able to navigate a snow covered trail. Shouldn't be too bad if only a few inches. Seneca L and Pole Ck trails are pretty wide and beaten down. No need for traction except maybe microspikes if weather is threatening before you go in. Have a great time!

Not sure how fishing is there.... Better places that have had less people
' Not All Who Wander Are Lost '

Good point. He's only got 3 days and mentioned Titcomb. It'll take 2 solid days to get in and out. Did not fish it myself though I'd like to try above the waterfall sometime. Guess I was focused more on the weather issue, not location. If Titcomb or the Cirque weren't primary destinations it certainly does open a lot of 3 day fishing options. I got a few inches of snow 2yrs ago mid-Sept by Island L (near Thumb) that obliterated a trail hard enough to follow without the snow. Good fishing in that area but he'd have to be comfortable with poorly marked trails/off trail if it snows.
You must log in or register to reply here.
Similar threads