Woke up bright and early on Sunday morning and drove to the Butler Fork Trailhead in Big Cottonwood Canyon to meet a group of hikers at 5:00 am. The group consisted of six hikers from the Wasatch Mountain Club and was led by a gentleman named Sam Grant. Sam had hiked the route the previous year in June with ninety degree temperatures and so he felt by moving the date up to May, it would not be so hot, though we would have to deal with snow. The other hikers, including myself, had never attempted Wildcat Ridge before.

We left three vehicles at the Butler Fork Trailhead and drove the rest to the Mount Olympus Trailhead, where we began to hike at 5:30 am. 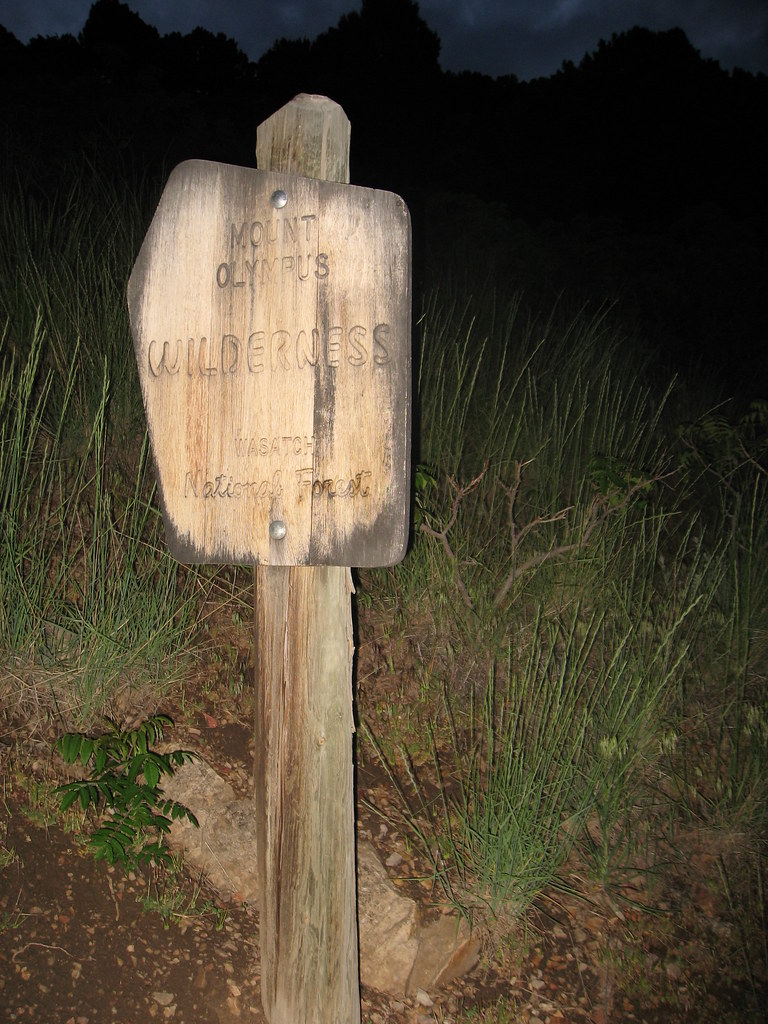 
The Hike up Olympus was uneventful and we took a short break at the top to fuel up for what lay ahead. 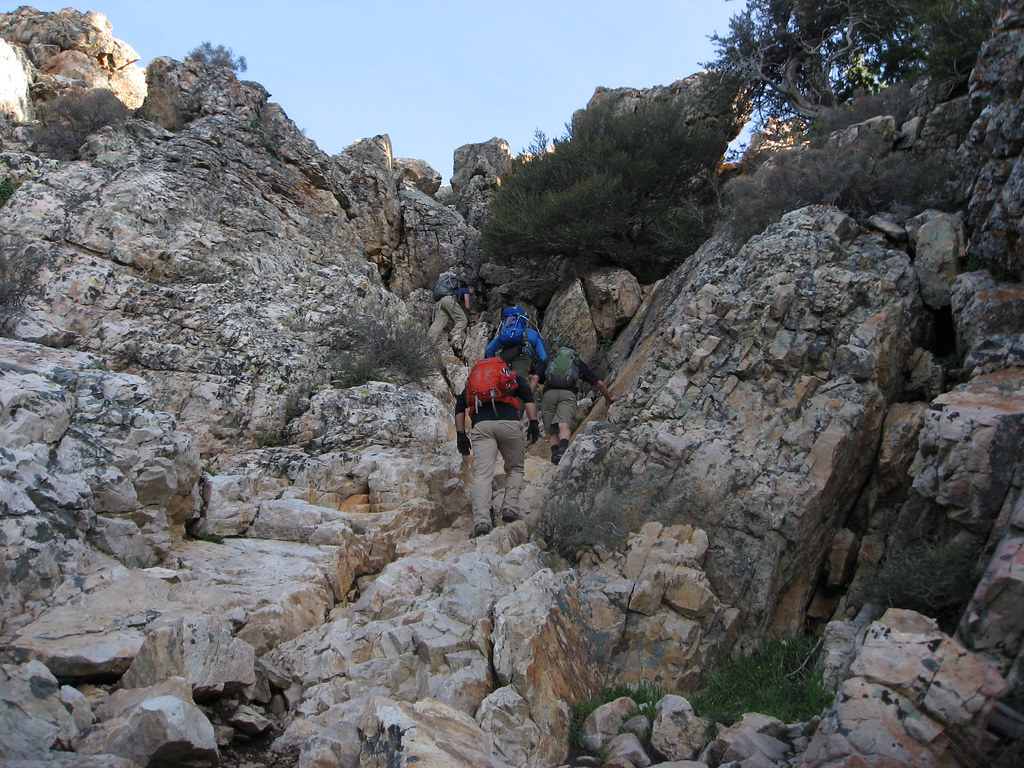 Approaching the top of Olympus 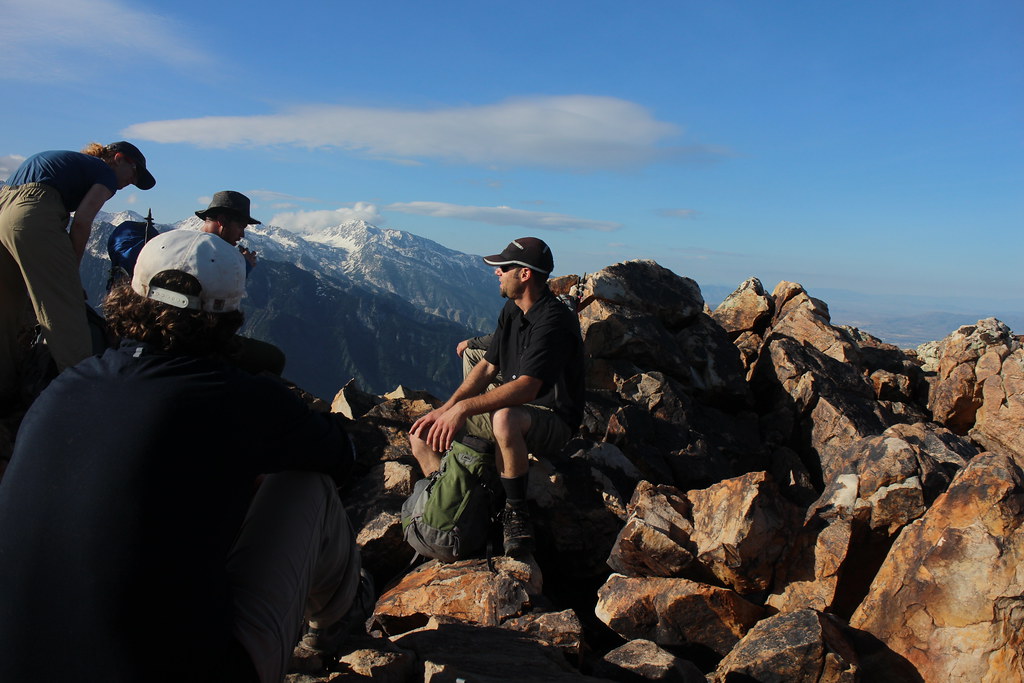 Breaking on top of Olympus

After the short rest, we began to downclimb the east side of Olympus and then make our way onto the ridge that separates Olympus from Triangle Peak. 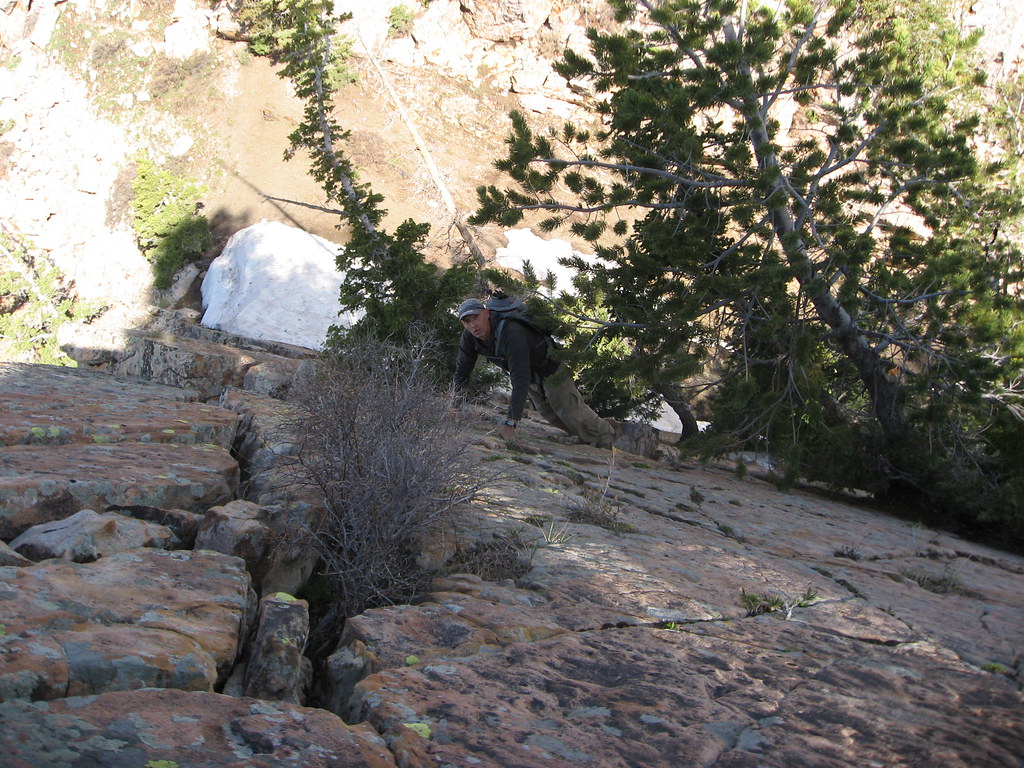 Gaining the ridge between Olympus and Triangle Peak

Once on top of the ridge, we worked our way along the knife's edge at a slow pace; occasionally we would drop slightly off the ridge to the north or south for an easier route. Eventually we made it to a flat area at the base of Triangle Peak. We discussed the easiest way to ascend the peak and determined that any line to the top would be good, so we all chose our own route. 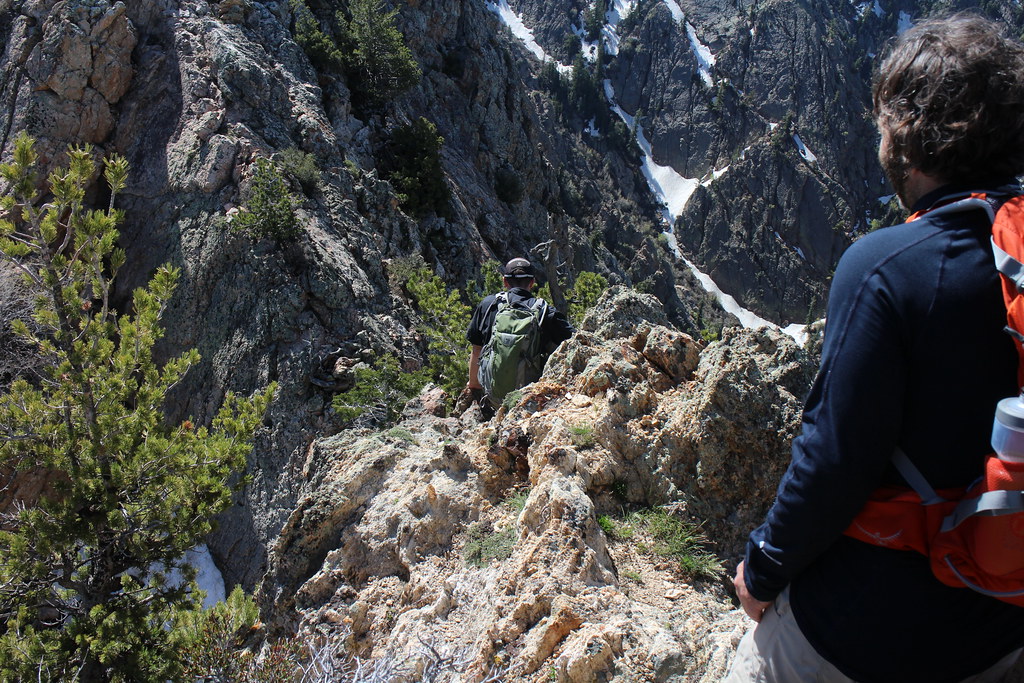 Working our way along the knife's edge 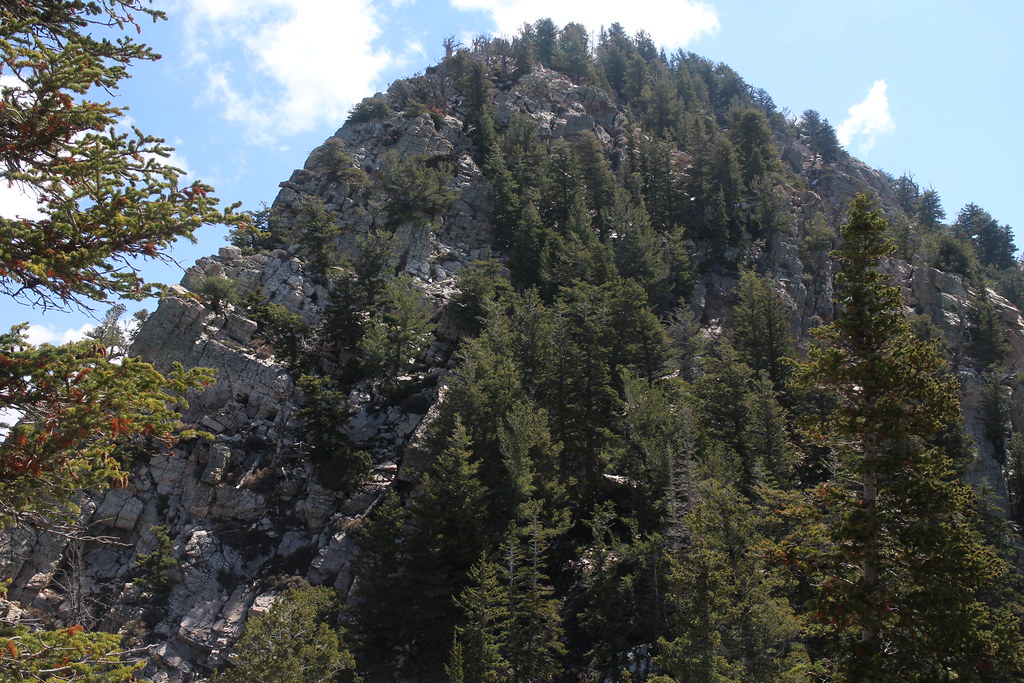 Looking up at Triangle Peak 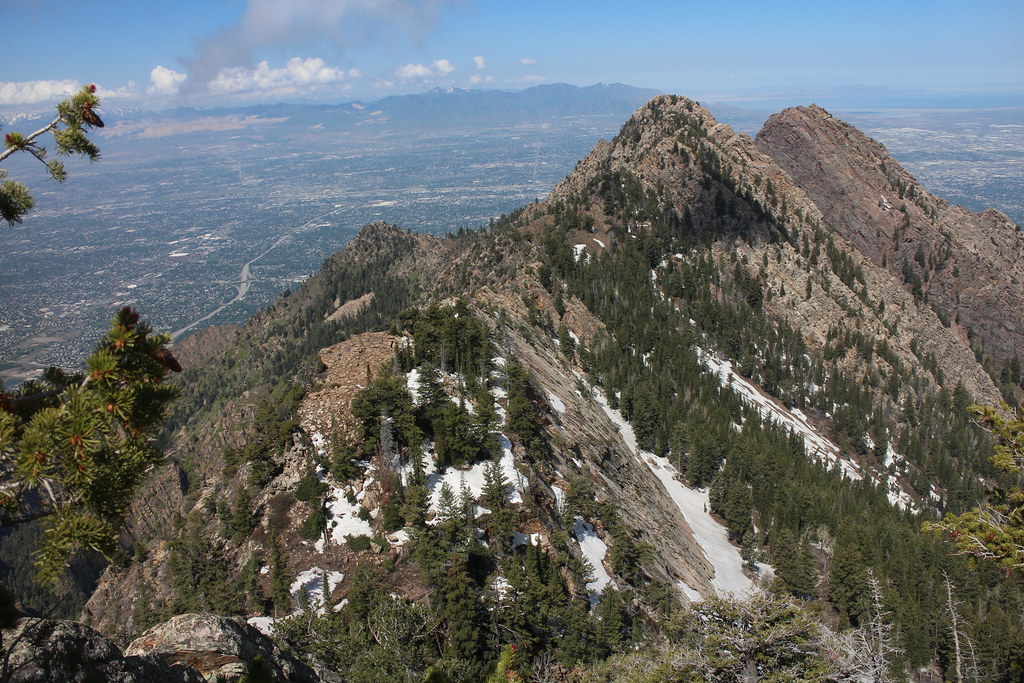 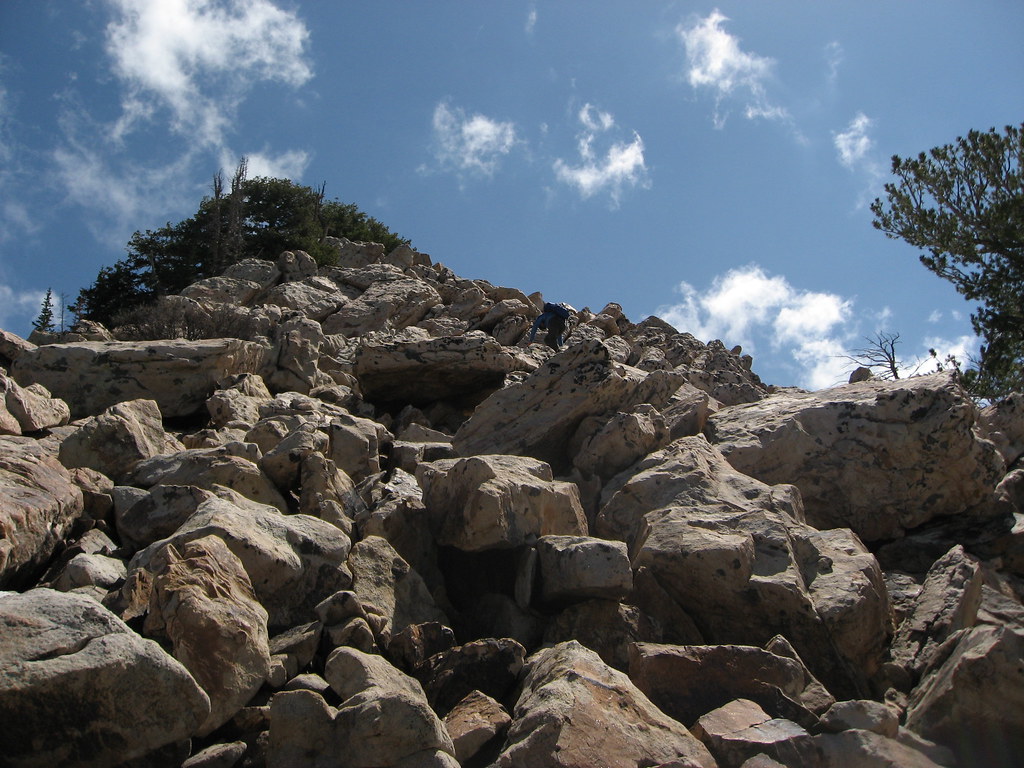 Almost to the top of Triangle

After Triangle Peak, we headed slightly south east to Peak 9,587 where we could see Mount Raymond for the first time, and then on to Peak 9,773. 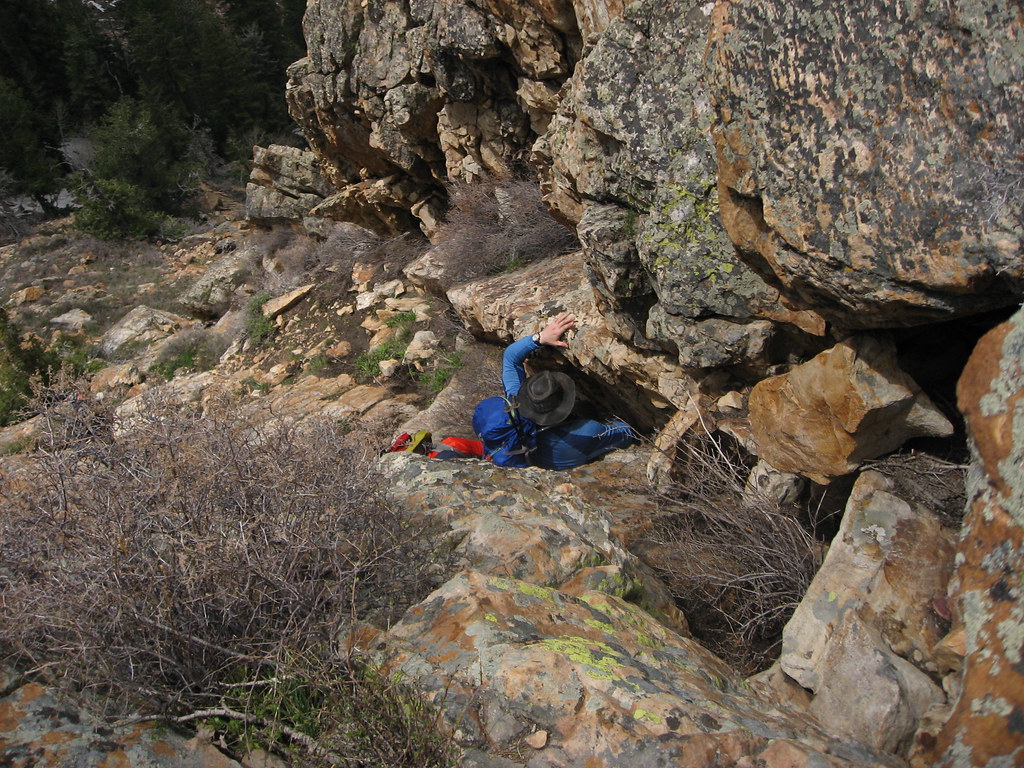 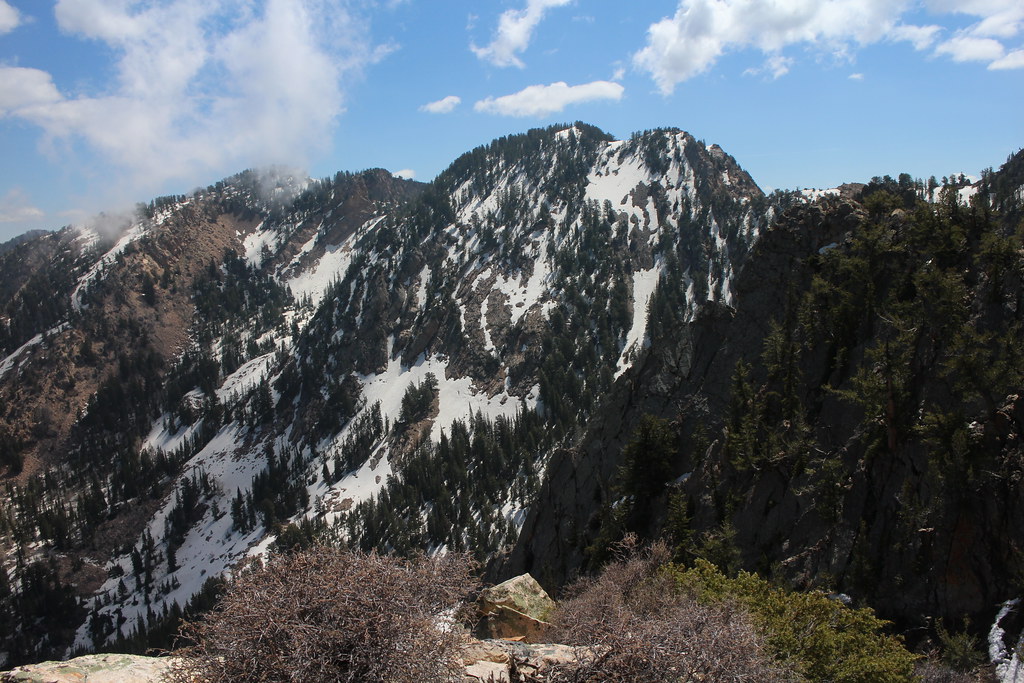 Peak 9,773 as seen from Triangle Peak 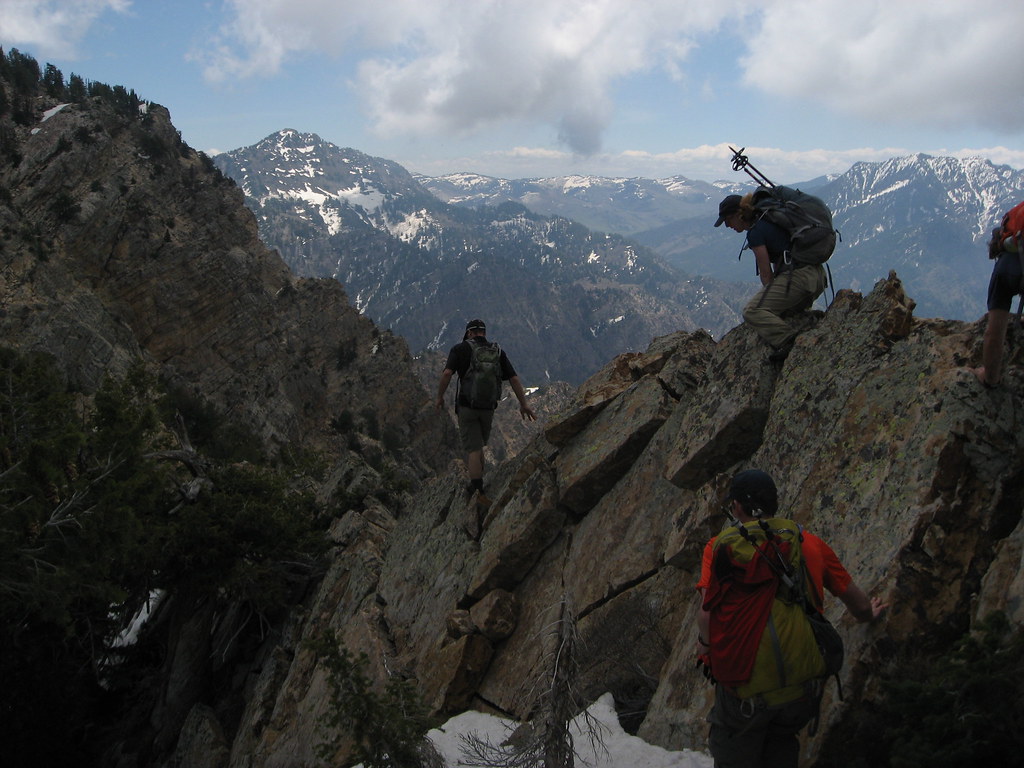 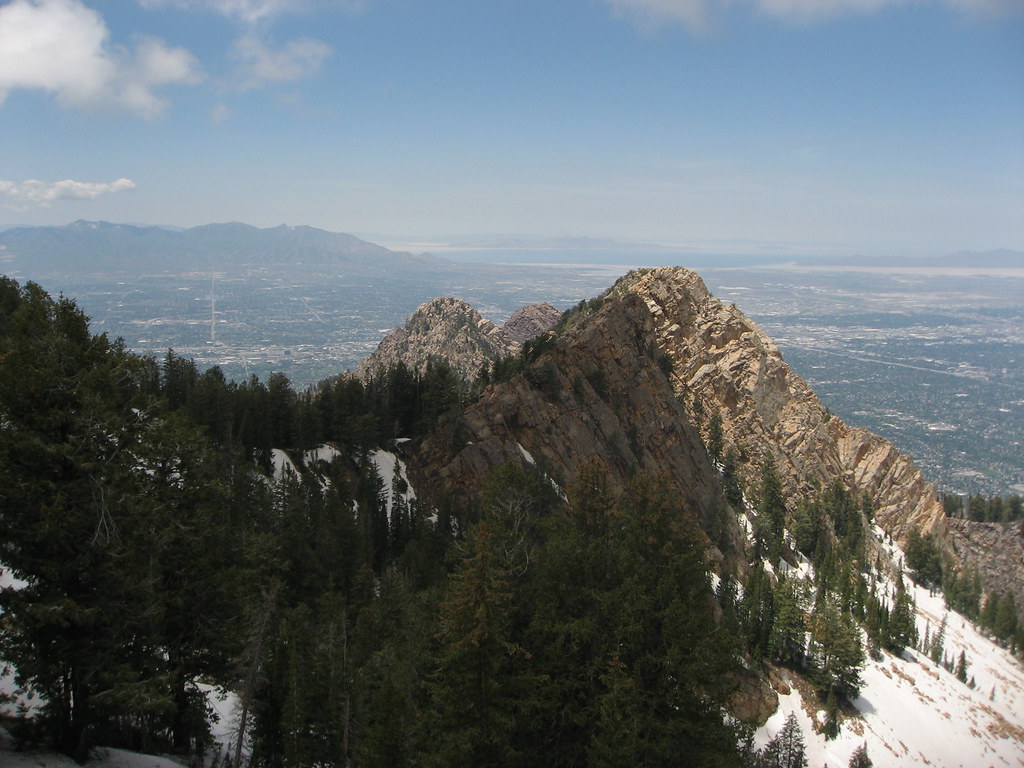 We then continued to follow the ridge line, though again we dropped down off of it when necessary. Since we are hiking this route in May instead of later in June, we had to deal with some snow along the way. 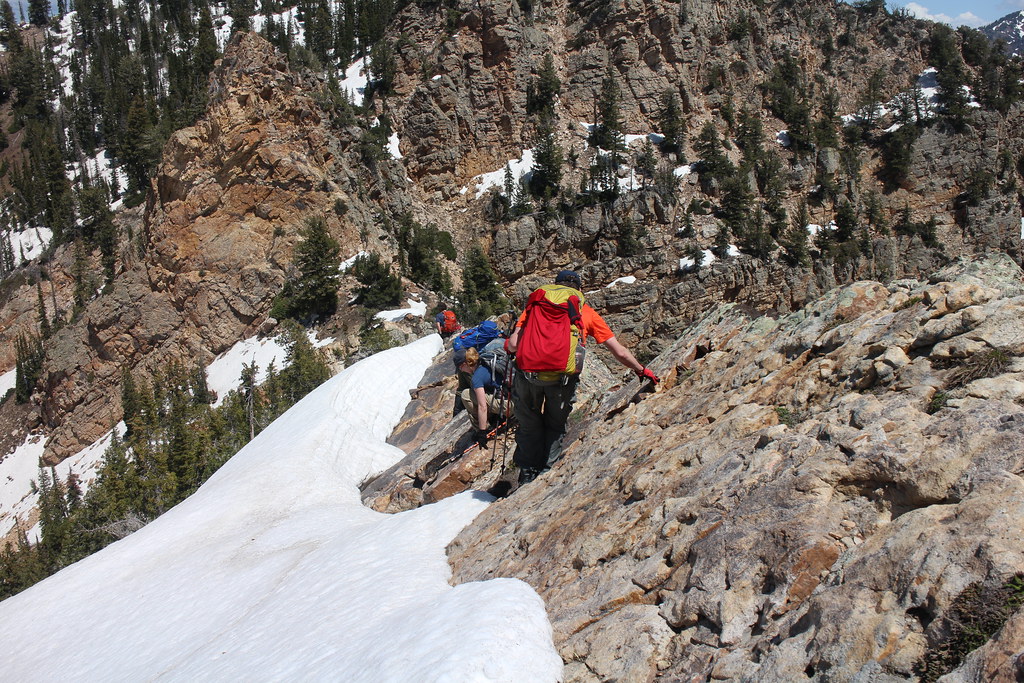 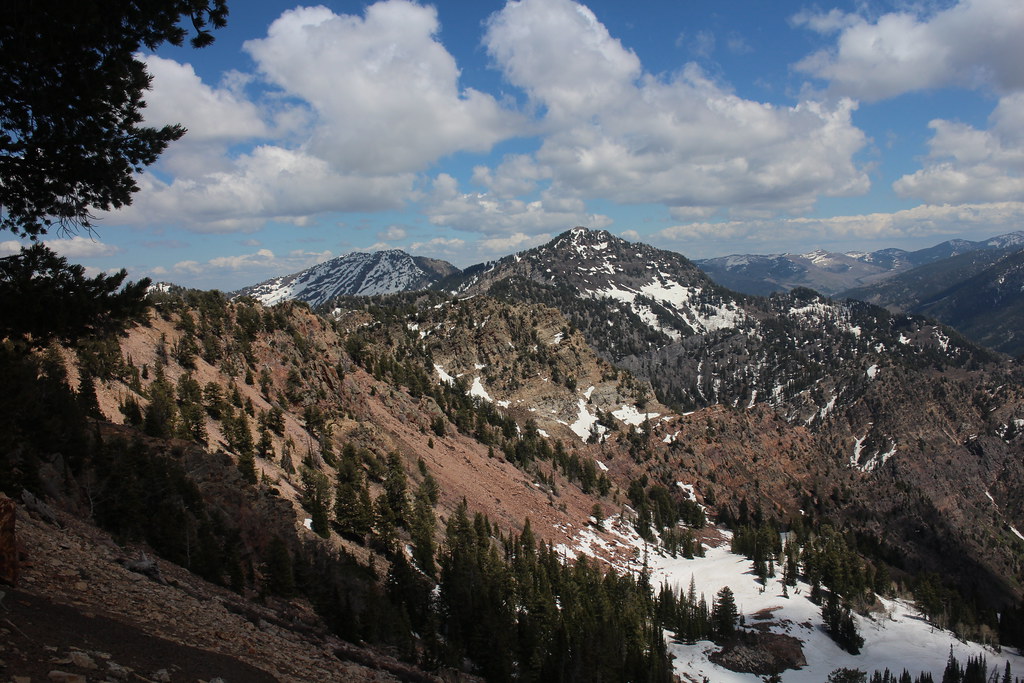 After twelve hours, we finally reached the base of Mount Raymond! Looking up the south slope towards the top of the mountain, I'm not sure that I can get it done. But I figure that I've come this far so I might as well grind it out. 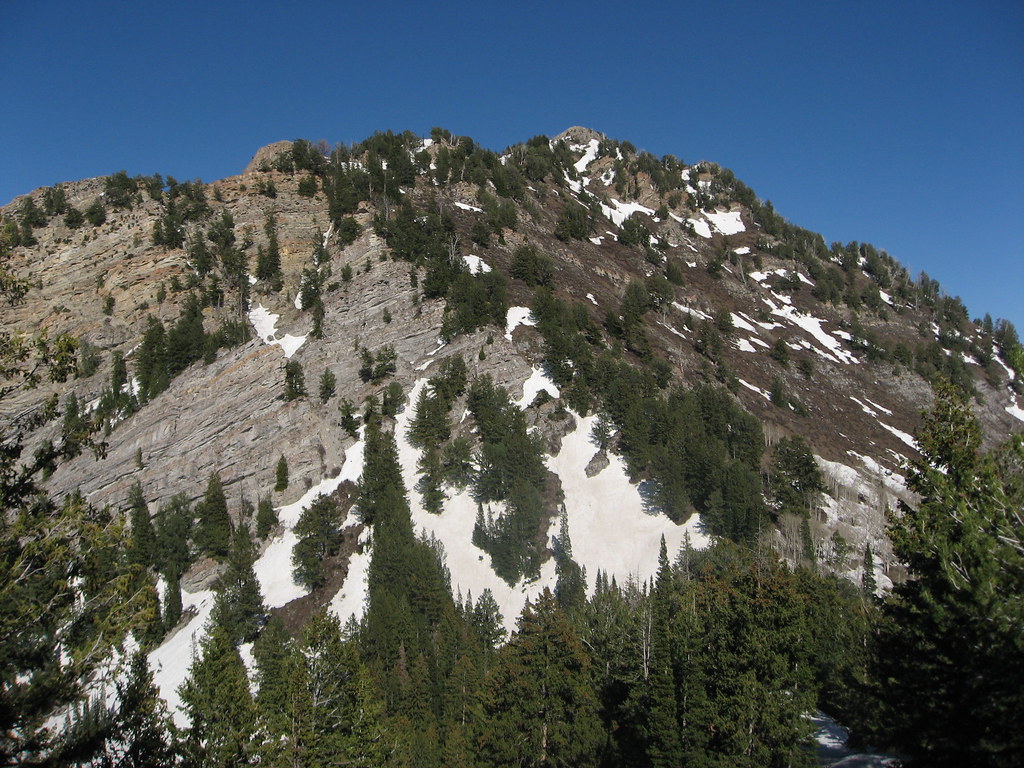 Almost at the base of Mount Raymond 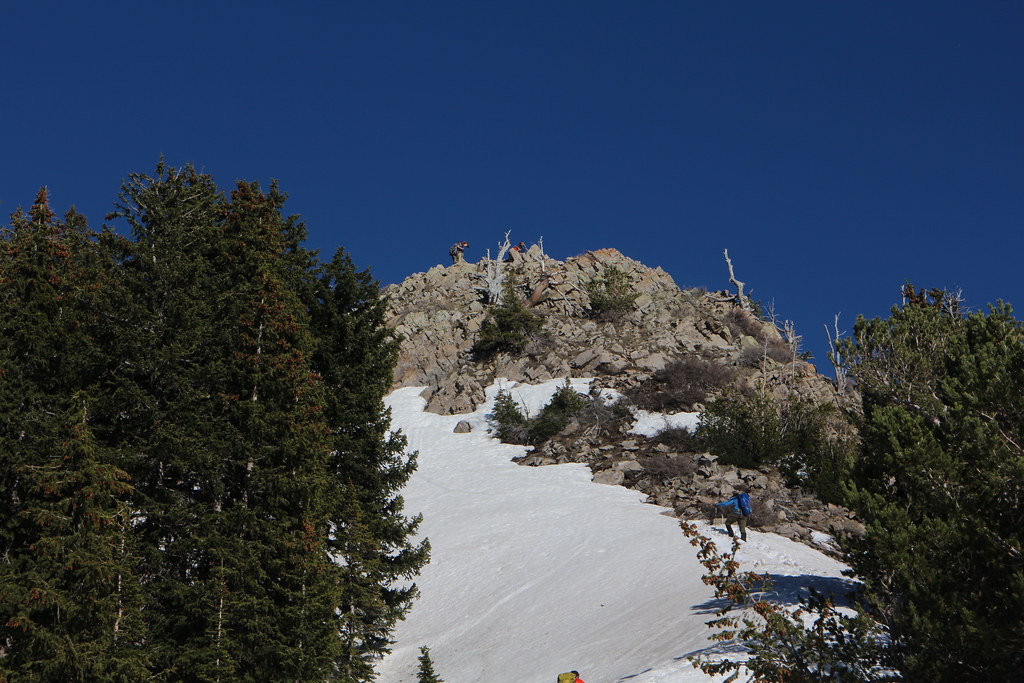 Nearing the top of Raymond 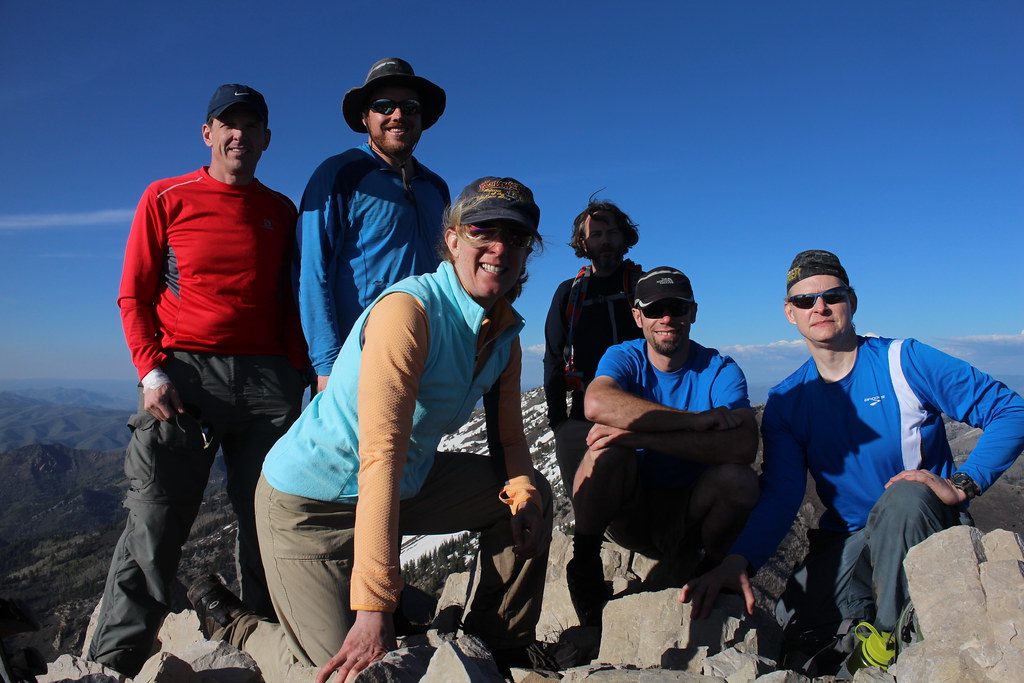 We made it - the group on top of Mount Raymond

After resting and getting a good bite to eat, we descended the last four miles back to the trailhead. It took us 15 hours and 45 minutes to complete the route and I was worn out.

Thoughts - If you enjoy a lot of scrambling and don't mind a fair bit of exposure along with some bushwhacking, or perhaps you would like to test your stamina, then this hike is for you. Seriously though, you get great views to the north and south when on top of the ridge and we had the entire route all to ourselves. If contemplating hiking Wildcat Ridge be sure and bring plenty of water and food and make sure you're in good physical condition to complete it because there are few points where you can bail out. I might add that three days later my legs are still sore.

If anybody would like to see all the photos of the hike here is the link. 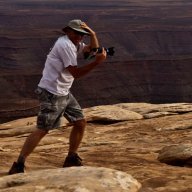 Thanks for sharing. Looks more strenuous and "climby" but reminds me of the Beatout hike. Some of that exposure isn't for me.
Scenic Distraction / Rock Art Fever / flickr

Wow!! This is awesome! I didn't know what Wildcat Ridge actually was when you had mentioned it before. What a route!
IG: @backcountrypost 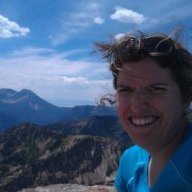 Awesome! I don't think I'd ever be able to bring myself to triangle peak. I've heard from other accounts it takes hours for that small stretch and I just don't think I could manage.
"Be happy for this moment. This moment is your life."
- Omar Khayyam

"I have found that if you love life, life will love you back."
- Arthur Rubinstein


Nick - Sam said that he will be leading the hike again next year. You should sign up for it. You don't have to be a member of the WMC to participate on one of their hikes. I probably could be talked into giving it another go.


nonameiwant - I think you might just surprise yourself. If you can make it to the top of Olympus without any problems you could probably push on. The physical exertion is the climb up Olympus and then the scramble up Triangle. The ridge between is more of a mental thing due to the exposure. You're going slow enough that from a physical standpoint it's not too bad. It kind of reminded me of the last part of the approach (50-75 yards?) to Lone Peak, If you've done that, only much longer. Of course, then you would have to make your way back!

Yes do the Beatout hike, worth doing at least once. I struggle with wanting to do it once more, it's been almost long enough to forget how much that hurt ; ).
Scenic Distraction / Rock Art Fever / flickr

Looks awesome, a little rich for my blood though.
You must log in or register to reply here.
Similar threads