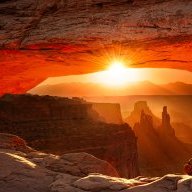 Last year was a disappointing year in the travel department for me. I had planned to go to Canyonlands at the end of March for two weeks, but in February ended up hospitalized for six days (a fricking TORTURE to be confined to a hospital bed that long) followed by a extended period on heavy antibiotics, so I canceled that trip until ally health dilemmas were safely behind me.

A second trip, to Yellowstone and the Tetons to see the eclipse, was set to go when just before I was to leave my car ended up needing major work. This delayed the trip for a few days, but while waiting on the repairs I got word that there was a possibility of layoffs later the year, so I canceled the trip in a panic, in order to save money, then regretted it a day later after all my reservations were canceled. Post-panic, I hastily put together an itinerary for a week in South Dakota at Wind Cave National Park, which was okay, but what I really had needed was to be back at my beloved Yellowstone, backpacking in the Lamar Valley, hiking in the Slough Creek area, etc..

Then in December I was putting together an itinerary for a trip to Canyonlands and Zion, when I abruptly got laid off. (On a side note, losing your job, even one you liked and planned to stay at, is not a disaster, and can turn into a blessing in disguise, as I think will be true of me).

Now my game plan is that when I am offered a new job, I'll say "Thanks, I'll see you in two weeks" and then hit the road for a 3-4 day Jeep tour of the White Rim (I NEED to get back to my beloved Canyonlands). I did this once before, but my trip was too short, only three days and two nights, partly lost to a rain delay that caused sections of the road to be temporarily closed on my departure day. Although I enjoyed it, I wish I had planned for more time for the trip since I ended up being mobile for too much of that time and didn't get to take side trips to Lathrop Canyon or Taylor Canyon.

This time I really want to do it right, and have a great travel experience to make up for what I missed last year, so I am asking for feedback from those in the BCP community who have done the White Rim on what things to see and how to make the best of this trip. I'll go to Lathrop Canyon and Taylor Canyon, of course, but what else is on the White Rim that would enhance my trip - what are the must-see sights or must-do experiences I should plan into my itinerary? With that information I am going to put together a smashing itinerary and then just wait for the opportunity to materialize.

Muchos gracias.
Mike
Wanderer
"..not all who wander are lost..."

Do it in July - I MTB'd it unsupported partway one summer and didn't see anyone. Carrying water can be a bit tricky, though.

Or just move to Utah, since you're not working, find a job there and go do it anytime you want. Why not?

Thanks, but July in Utah would be oppressively hot for me (June itself was as much as I could tolerate). I am a natural Midwesterner and love my cool temps!
Mike
Wanderer
"..not all who wander are lost..."

Well, to be honest, I almost died. Not literally, but it felt like it. That's why I say I only went partway. Not one of my better plans.

But getting back to your original question, it seems like you just go around the White Rim, and what you see is what you see. There are a couple of side excursions you can take - one up to see Moses and Zeus on the drainage that comes out of Upheaval Dome, and the other is a very short side trip to see the White Crack.

You can go down from White Crack to the old miner’s camp.

I did a supported bike two years ago and on day 1 we camped at Airport and then
biked down Lathrop. WOULD NOT DO THAT AGAIN. It sounds like you're Jeepin' it
and that might be fun but on a bike it was miserable.

You'll want to do the Holeman slot canyon and Fort Ruin. After getting
to the ruin, drop down to the river and see the Outlaw Cabin.

There are other sights all along the way that don't require hiking to, ie
Mussleman Arch, Gooseneck Overlook, Washer Woman, Monument Basin, etc.
They can be as much of an adventure as you make them or just place to stop
and soak it in.

If it means anything to you this is how I'd rate my campsites.

Here's my TR - White Rim On A White Bike
Do not pray for easy lives. Pray to be stronger men. - JFK
Orem Chiropractor

I liked Potato Bottom. There's a big mesa nearby that is totally covered with Moki marbles that makes a nice half day hike.

Thanks, Dr. Ned, that's a good list. I thought Airport was okay, but not my favorite, although I liked Potato Bottom. For me the preferred would be either White Crack, or Murphy Hogback, both of which I am sure will be booked. Last minute reservations are likely to be a problem, but I have no real way of planning ahead of time, so I will have to take what I can get . The other suggestions of things to see are great. I'll have to see about the miner's camp. Sounds like a great hike but 16 miles in the Utah son may be prohibitive,
Mike
Wanderer
"..not all who wander are lost..."

MVS said:
Thanks, Dr. Ned, that's a good list. I thought Airport was okay, but not my favorite, although I liked Potato Bottom. For me the preferred would be either White Crack, or Murphy Hogback, both of which I am sure will be booked. Last minute reservations are likely to be a problem, but I have no real way of planning ahead of time, so I will have to take what I can get . The other suggestions of things to see are great. I'll have to see about the miner's camp. Sounds like a great hike but 16 miles in the Utah son may be prohibitive,
Click to expand...

If you cant set your dates, then, yeah, you get what you get.

I liked all the spots too, just some more than others. The only thing I didn't like about Potato Bottom
was the bugs, which I was not prepared for, but I did love the giant Cottonwood tree there.
Do not pray for easy lives. Pray to be stronger men. - JFK
Orem Chiropractor

Rockskipper said:
I liked Potato Bottom. There's a big mesa nearby that is totally covered with Moki marbles that makes a nice half day hike.
Click to expand...

Seriously, I thought I had done exhaustive research prior to doing.
I knew nothing about Moqui Marbles.
Do not pray for easy lives. Pray to be stronger men. - JFK
Orem Chiropractor

Moki Marbles are sandstone concretions. There's still some mystery as to how/why they form. The article you posted says they're black, but I've found more white and red ones than black.

I'll see if I can get a Google map coordinate, but it's been awhile. I just found them one day while hiking, as the rangers had closed down the rim from bad weather and we were stuck there. They weren't that easy to get to, so I don't think it makes much difference if everyone knows about them. Besides, they're all over the place. There's a really nice bunch of them up on the Levi Wells Road on the Island in the Sky. Dr. Marjorie Chan at the U of U is the world expert on them, IIRC.

Ok, here's a screenshot from Google Earth, hopefully you can read the coords at the bottom, but Potato Bottom is at the lower left corner. The marbles may be more up on the white layer (navajo) from my pin, and they were reddish white, not black. 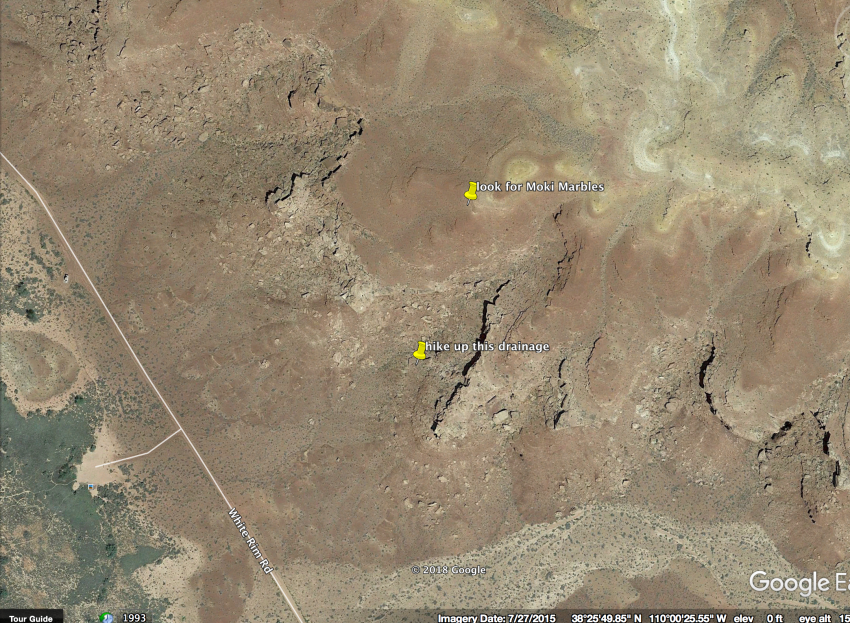 Last edited: Jan 17, 2018
You must log in or register to reply here.
Similar threads