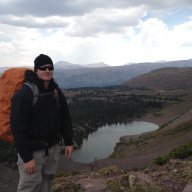 Anyone else contemplating canceling a Uintas trip based on the weather?

This is a bit late, but here's my .02... embrace the monsoon! Part of what makes the Uintas, Winds, etc. lots of fun is the summer monsoon pattern that makes weather up there so crazy. Just be prepared to take shelter when needed and to be entertained if it hold you up for longer than expected. Usually the summer storms kick up in the afternoon and cook off by evening.
IG: @backcountrypost

I significantly changed my Winds trip this past weekend because of the weather. I regretted it as the weather improved later in the weekend, but I was glad that I wasn't out in it a few times. We slept in the back of the truck during one nasty storm, and I was really glad I wasn't in a tent in the backcountry during that storm.

That having been said, I've backpacked in some bad storms, and it's not that terrible, usually. But this weekend the weather was just shaping up to be bad pretty regularly for a couple of days, and that didn't seem like too much fun. When the storms are really short and sporadic it doesn't bother me very much, but when they settle in, it's tougher to deal with. We could see storm clouds building as we were unloading our packs at the trailhead, and that just made us question if we wanted to deal with it.

I've also learned that when it's just my wife and me, it's a lot easier for us to talk ourselves out of dealing with bad weather. But when I go with other friends, I think we get all macho on it and just push on through

We camped above Lava Hot Springs and it rained every afternoon to night for a couple hours, and Friday was the worst with a tornado warning. It was awesome. My 2 month old daughter has officially survived a tornado (warning) ! We just car camped but, hopefully, we'll get her our backpacking in a couple weeks, rain or shine.

Backpacking in the northwest equals rainy weather, almost anytime of year. The monsoon summer of the intermountain west is part of what makes these mountains so much fun!
And besides, when did the last EPIC trip go exactly as planned? Wasn't there nasty weather?

Most of the time I go ahead with my plans, despite the weather forecast. The exception would be if the weather is going to be hazardous to my health (I wouldn't hike a slot canyon with storm clouds in the sky for example). You can't predict exactly what the weather will do, but I've found that most of the time I still have a good time even with less than ideal weather. I took my son to Grand Teton NP Thursday through Sunday, in spite of the forecast predicting a 30-50% chance of storms each day of our trip. In my experience mountain storms usually start strong, but roll out fairly quickly. Except when they don't.

In any event we went for it, and I'm so glad we did. We had nice dramatic clouds most of the trip which made for some nice pictures, and the only day the storms stuck around for long was Saturday. Even then it was kind of nice because it forced us to take some much needed down time. It helps if you adopt the attitude that you're just going to roll with the punches. Try to find the positives in the situation (or the rainbow at the end of the tunnel). But as @Nick pointed out, be prepared with something to keep you entertained in case you end up tent bound for long periods of time.
http://www.lisakellyphotos.com/

I kept going, even with some bad weather in the forecast.
For yesterday they had a 40% chance of rain in the Uintas and at the end I got stuck into a rain storm for 18 straight hours. It started raining late that one evening and never stopped until late afternoon the next day. Had to change a few plans but it was still an epic first time trip and I am more than happy that I've done it.
And I actually had time to read what I usually never have
http://yvonnebaurphoto.smugmug.com/

@Miss Buffalo - I saw your vehicle at the Christmas Meadows TH on Friday morning. Must've been quite the wet adventure up there.

I've been thinking about this thread and I guess I don't practice what I preach - at least not this weekend. I set out for a 3-day backpack into the Uintas this weekend. On Friday morning, I left SLC with the rain falling for pretty much the entire drive out to the Uintas. I just kept thinking this has to burn off and give a break to get a bit of hiking in. We got to the Christmas Meadows Trailhead around 10am to meet up with @slc_dan and @NateGeesaman. We waited around there for about 2 hours, watching the rain get stronger and stronger before they hiked in, totally soaked. We lingered around the trailhead for a bit but it just kept pouring. So we turned around and drove all the way back to SLC where the weather was then beautiful. After seeing some of the photos others took this weekend, I'm definitely feeling a bit of remorse for calling it, but waiting out a storm in a tent is one thing - hiking in it is another. Thinking I might have to come up with a redemption trip this weekend...
IG: @backcountrypost

It sucks when you scrap a trip, but sometimes weather just takes away the fun. And I like to enjoy my trips. Some of my best trips have had nasty weather spring up in the middle of the trip, but I still don't like starting a trip in bad weather.

Nick said:
@Miss Buffalo - I saw your vehicle at the Christmas Meadows TH on Friday morning. Must've been quite the wet adventure up there.
Click to expand...


@Nick, it was wet and the worst, I had no idea when it would stop.
The rain started Thursday late afternoon when I set up camp and it never stopped until the next afternoon. Sometime it rained so hard that I couldn't get out of my tent.
Let's say it that way - my book was a nice read but I would have preferred to explore more of the area.


Nick said:
I After seeing some of the photos others took this weekend, I'm definitely feeling a bit of remorse for calling it
Click to expand...


The sunset definitely was a great reward for the spoiled day in the rain. Too bad I only had my little point and shoot camera.

It seems half of the members of BackcountryPost were hiking somewhere around me
http://yvonnebaurphoto.smugmug.com/

maybe it was my fault with the bad weather - I'm known to be a bad weather magnet.
But usually it just means t storms, and not such long lasting rain storms.
http://yvonnebaurphoto.smugmug.com/
You must log in or register to reply here.
Similar threads