After being slightly ahead of peak the previous weekend in the Adirondacks, this past weekend I decided to head to northern Vermont after checking the foliage forecast maps. My wife had too much homework and couldn’t join me, so I decided to bring my dog Joey along for the trip. This worked out perfectly as the hiking was neither long nor strenuous.

Even though I can get to the Vermont border in about 3 hours, this area of Vermont is closer to a 6 hour drive. I hardly minded the long drive though since unlike the Adirondacks and Whites which are almost all highway driving, the drive into the Green Mountains of Vermont is extremely scenic and rural for much of the drive. The small county roads along the route pass through farms on rolling green hills and small towns that make you feel like you are in one of those New England calendars they sell at gift shops and mall kiosks. Besides, I had Joey to keep me company along with some good music for the drive.

The rolling green hills and the blue sky sandwiched the foliage colors, a very different scene than the Adirondacks and Whites which are both less than 2 hours away. 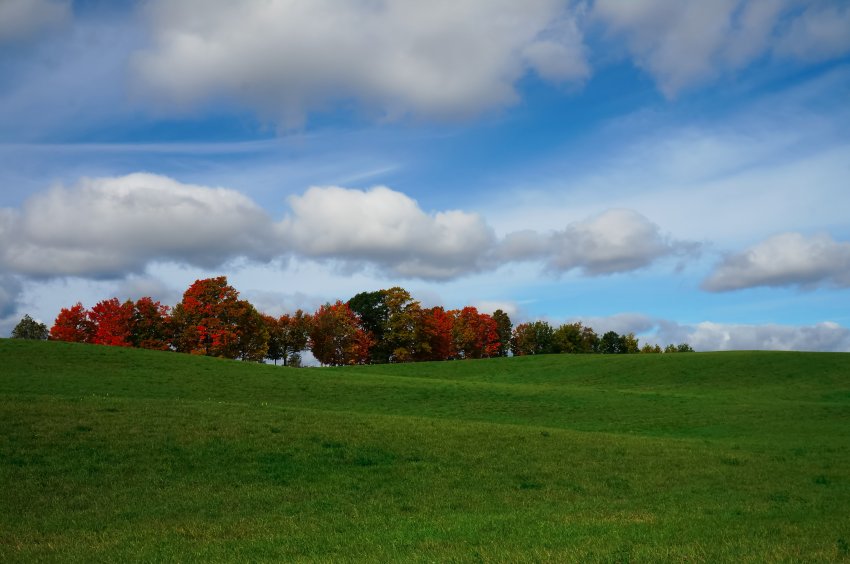 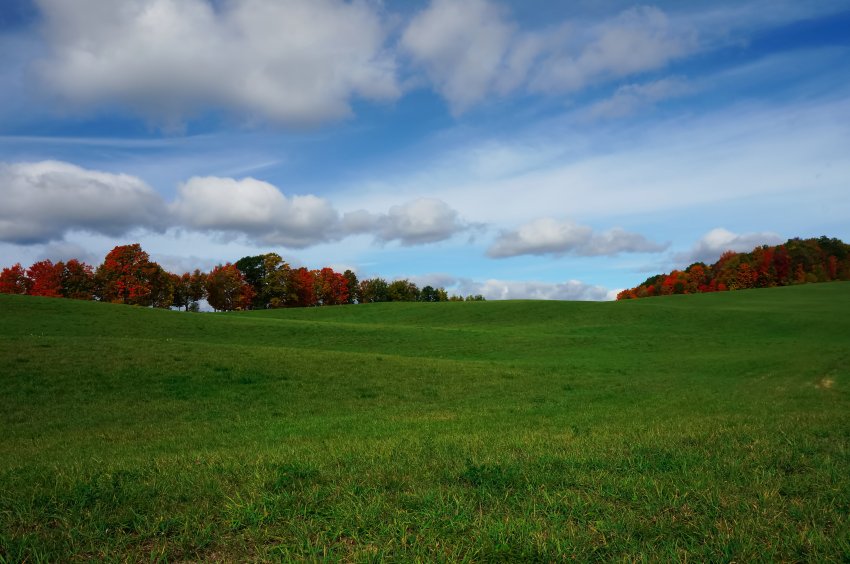 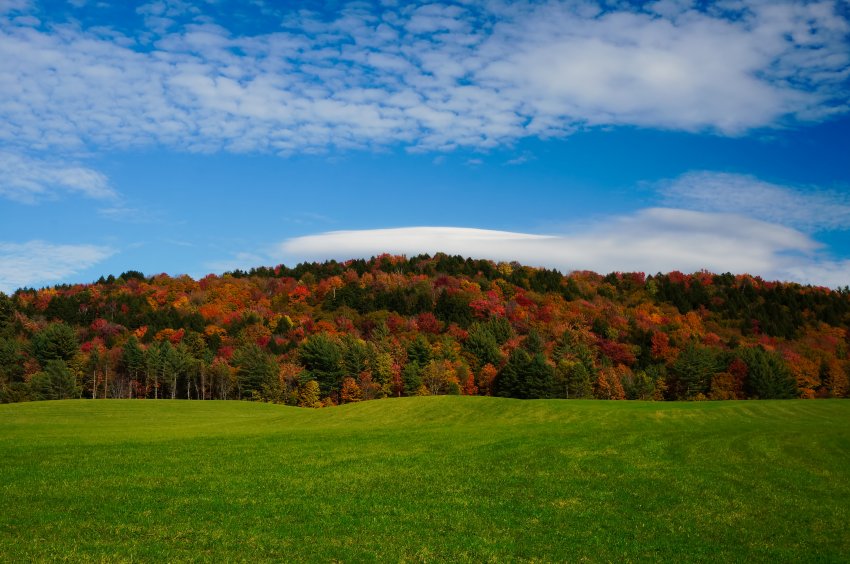 Some scenes of the picturesque towns I passed through along the way. 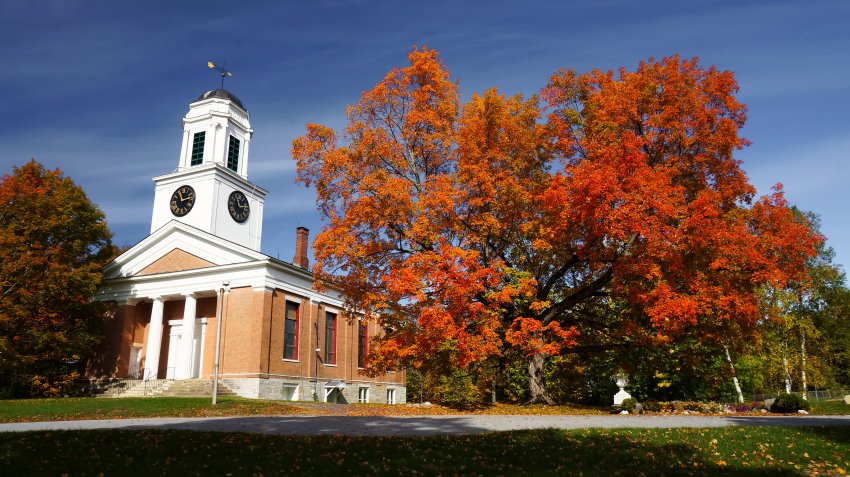 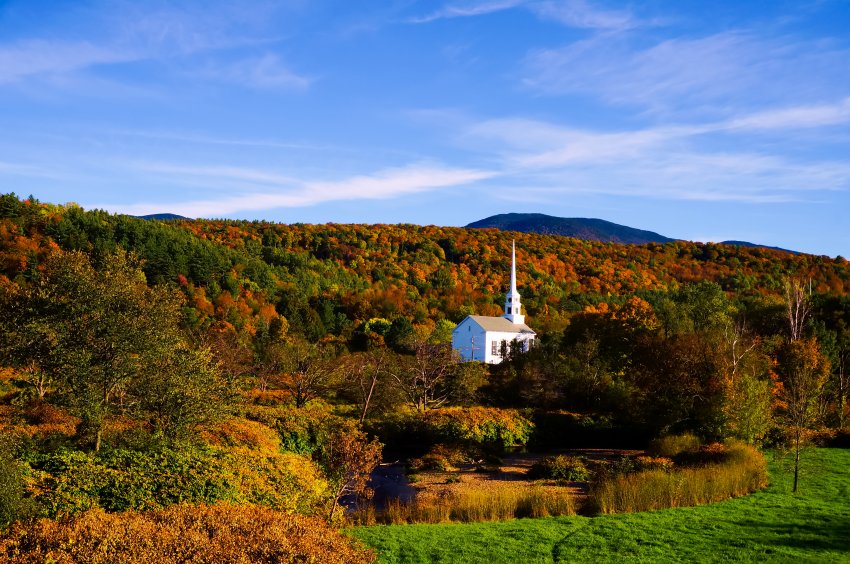 The plan for day 1 was to hike the Preston Pond Loop with and take a spur out to a spot called Libby’s Look. The trailhead was at pretty low elevation in the valley so I had to work my way up to find the color. 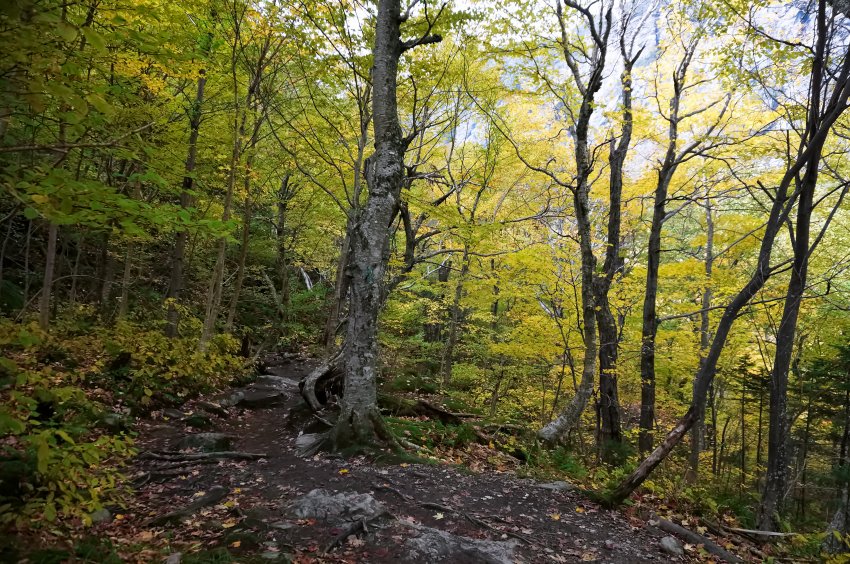 I have no idea what this sign along the trail means. If anyone knows, I’d be interested to hear. 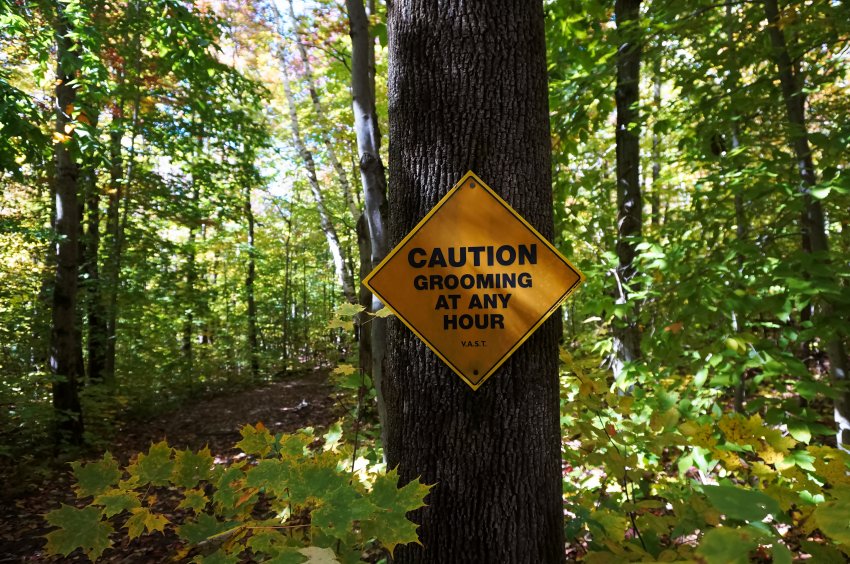 Preston Pond seemed to be more of a swampy area, but was surrounded by color which made it look nicer than it probably normally looks. 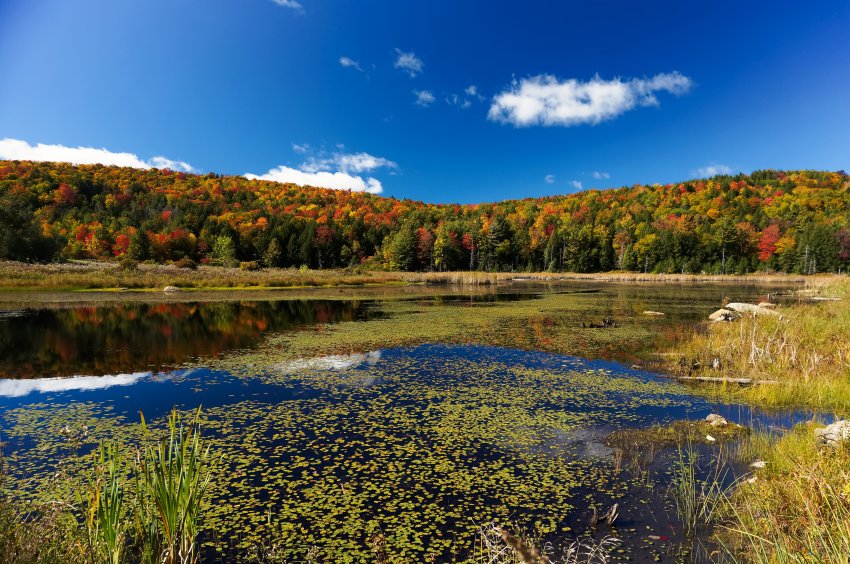 Libby’s Look had a great 180 degree view. I had it all to myself and took a break here to have lunch with Joey. 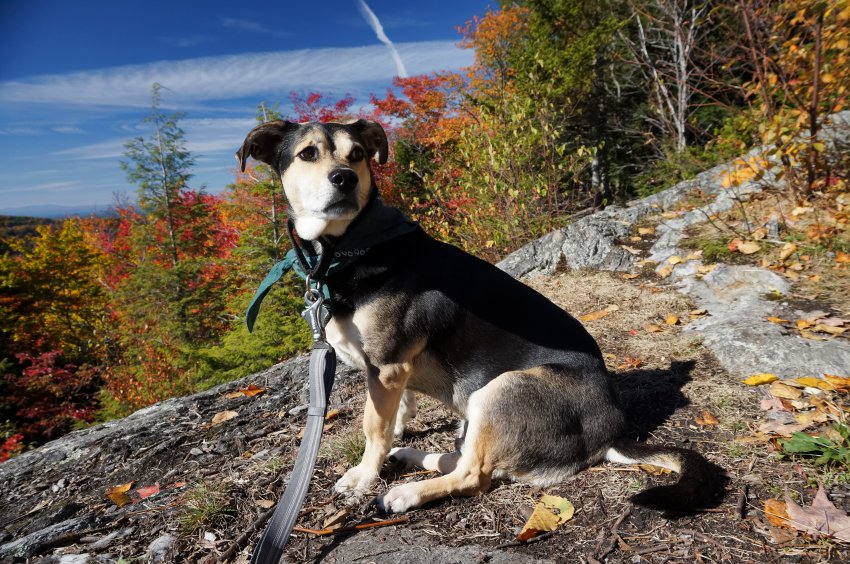 I had a few ideas in mind as far as a campsite for the night but no set plans. I had initially planned to stay at one of the campsites along the Long Trail where we’d be hiking the next day. There were primitive campsites and a lean-to only about 1.2 miles in from the trailhead . However, since it was supposed to get down into the 30’s that night and I had Joey, I really wanted to have a campfire. So we drove to Elmore State Park where we could get a tent site with a fire ring. Joey and I relaxed by the fire, ate dinner, and hit the tent early. Joey really loves the tent for some reason. Whenever I would unzip the door to put something in or take something out, he’d press his way in, wag his tail and lay down.

The next day we were hiked a loop out of the Sterling Pond Trail and the Long Trail. Sterling Pond is a mountain top lake which I had heard was beautiful. It was definitely a beautiful place, but I failed to realize beforehand that it was completely up in the alpine zone, so the Fall colors were nowhere to be found for much of this hike. It was a beautiful area so I didn't mind the break from all the colors.

The famed Long Trail – The Long Trail is the country’s oldest long-distance hiking trail running 272 miles north/south along the entire length of Vermont. BCP member @12trysomething thru-hiked the Long Trail last year and posted a few videos on BCP of his thru-hike. 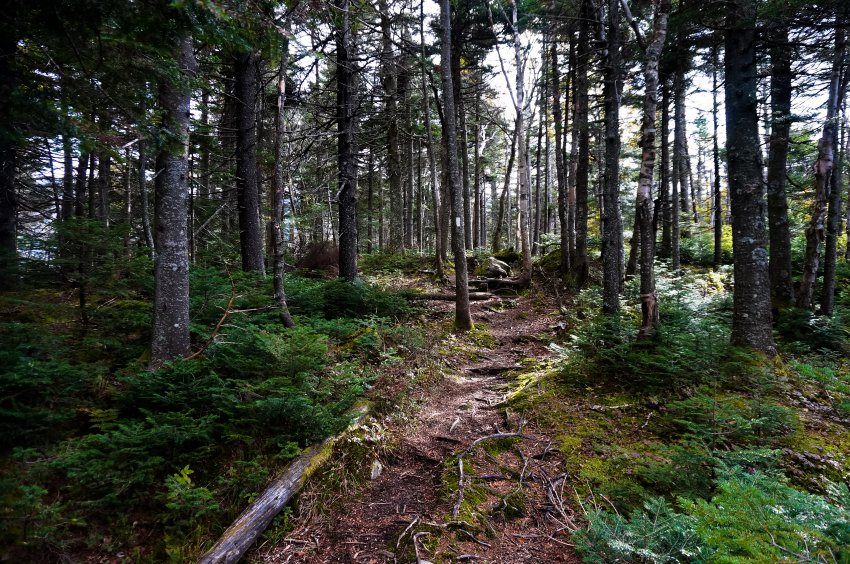 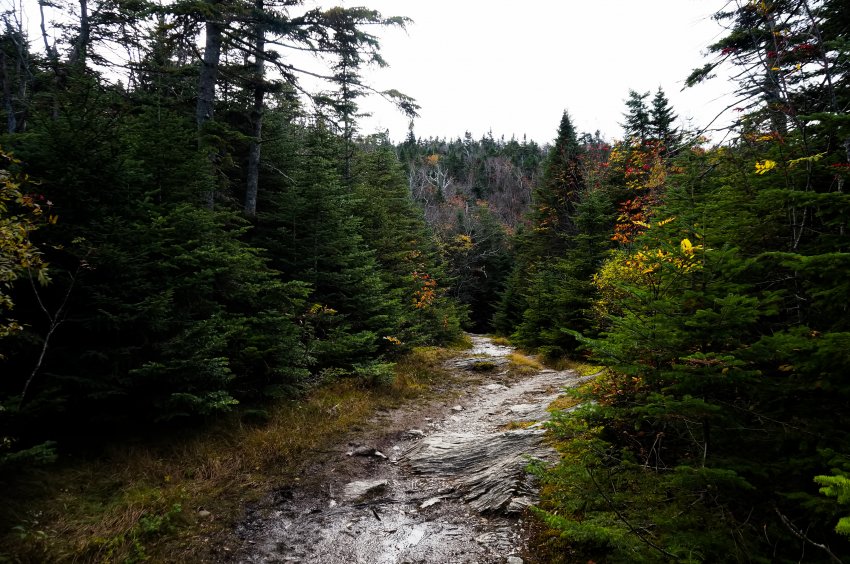 A view of Sterling Pond from the Long Trail 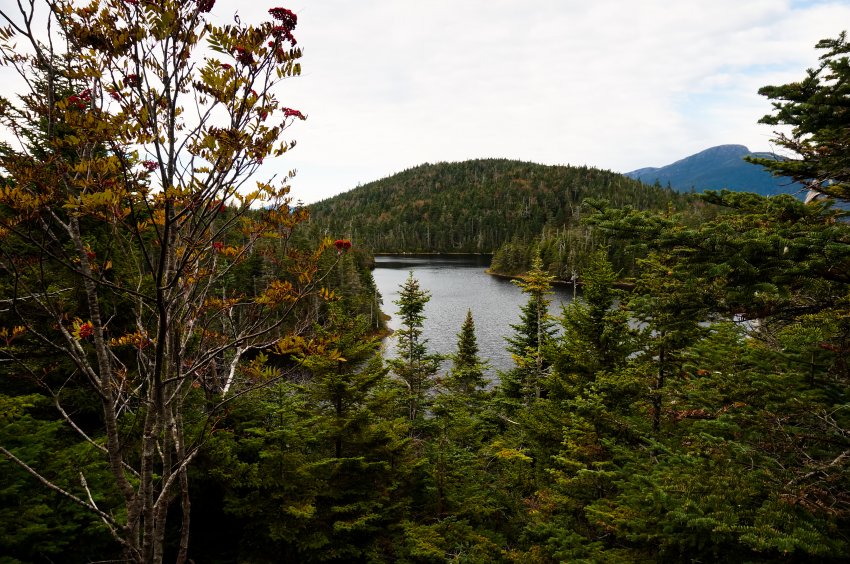 Some views of Sterling Pond from its shoreline; an incredibly beautiful place. 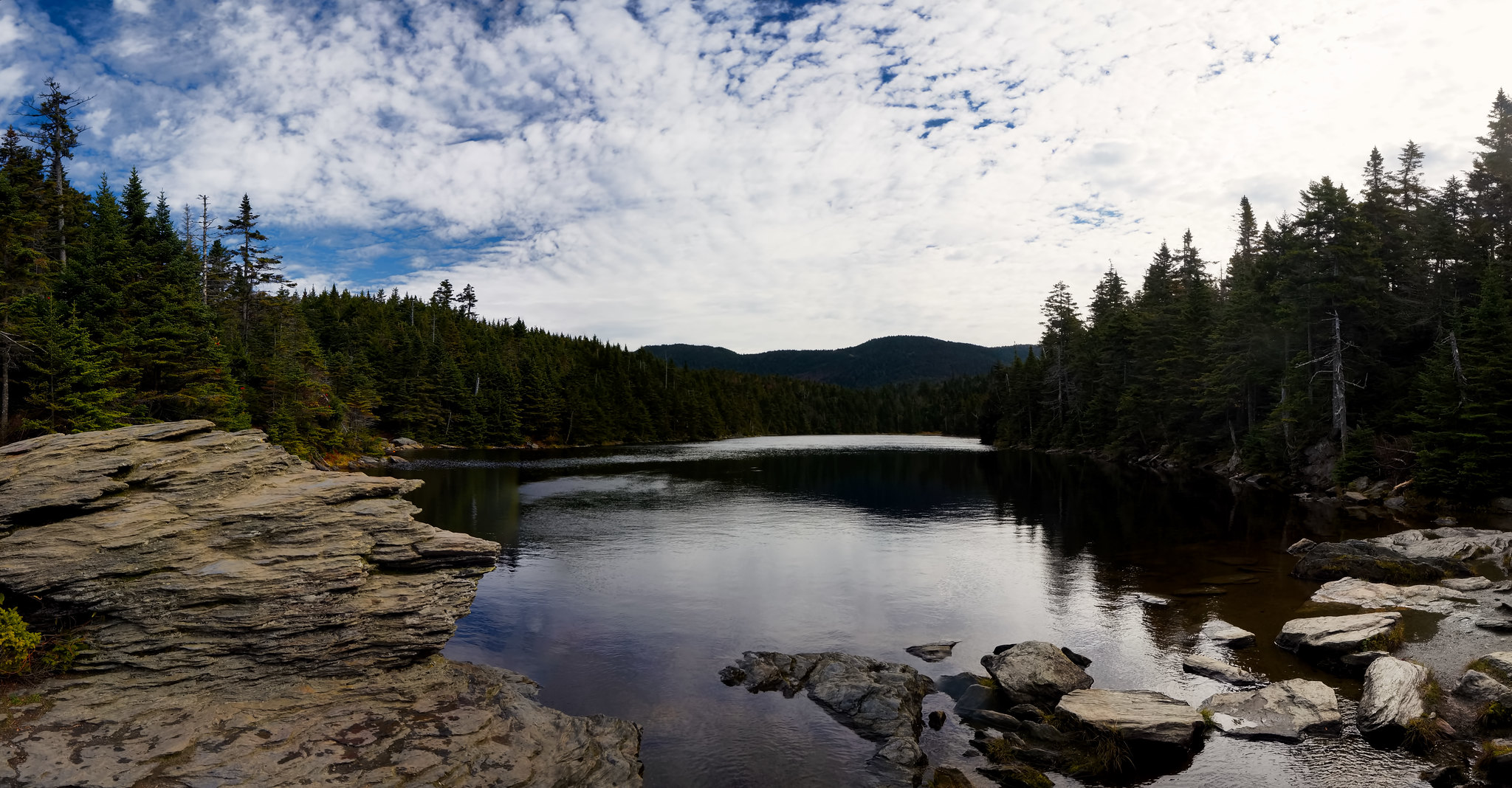 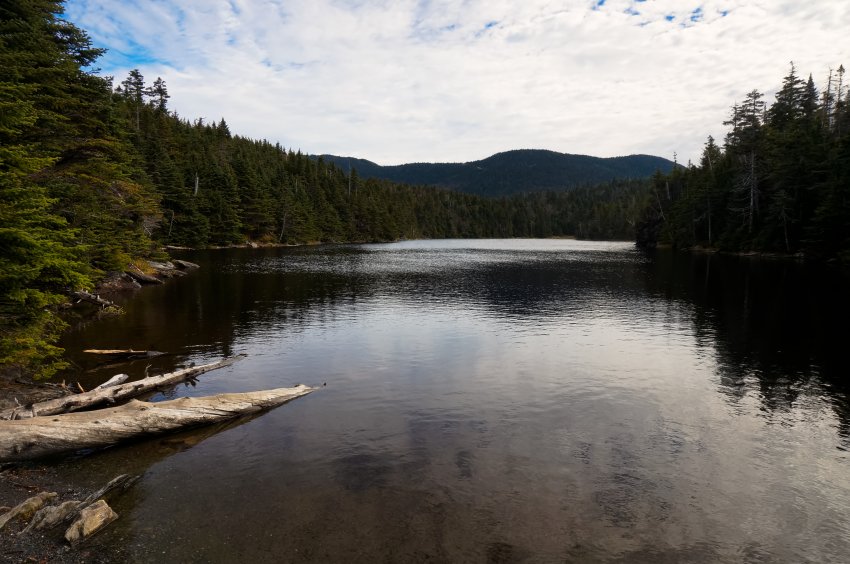 We then returned to the trailhead which was located in Smuggler’s Notch. From the notch you can see tiny little dots (climbers) scaling the walls of the notch. 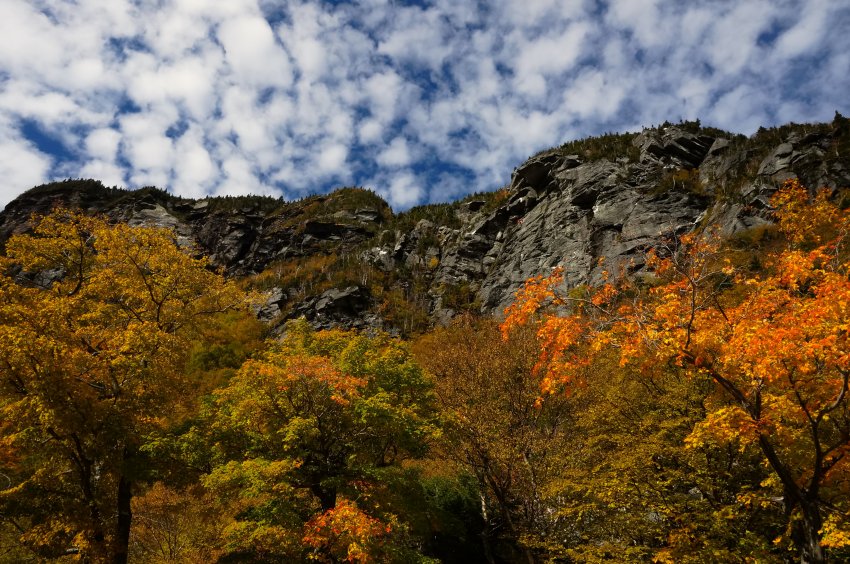 From there, we headed to the Visitor’s Center on Mount Mansfield and hiked from there to the true summit of Mount Mansfield (called the chin). Mount Mansfield is Vermont’s tallest mountain so while we were up high walking the ridge, we were too far up to really appreciate the foliage. It was also terribly windy up there so we sort of hurried through the hike as we were both hungry and we still needed to drive home.

A few shots heading towards the summit of Mount Mansfield 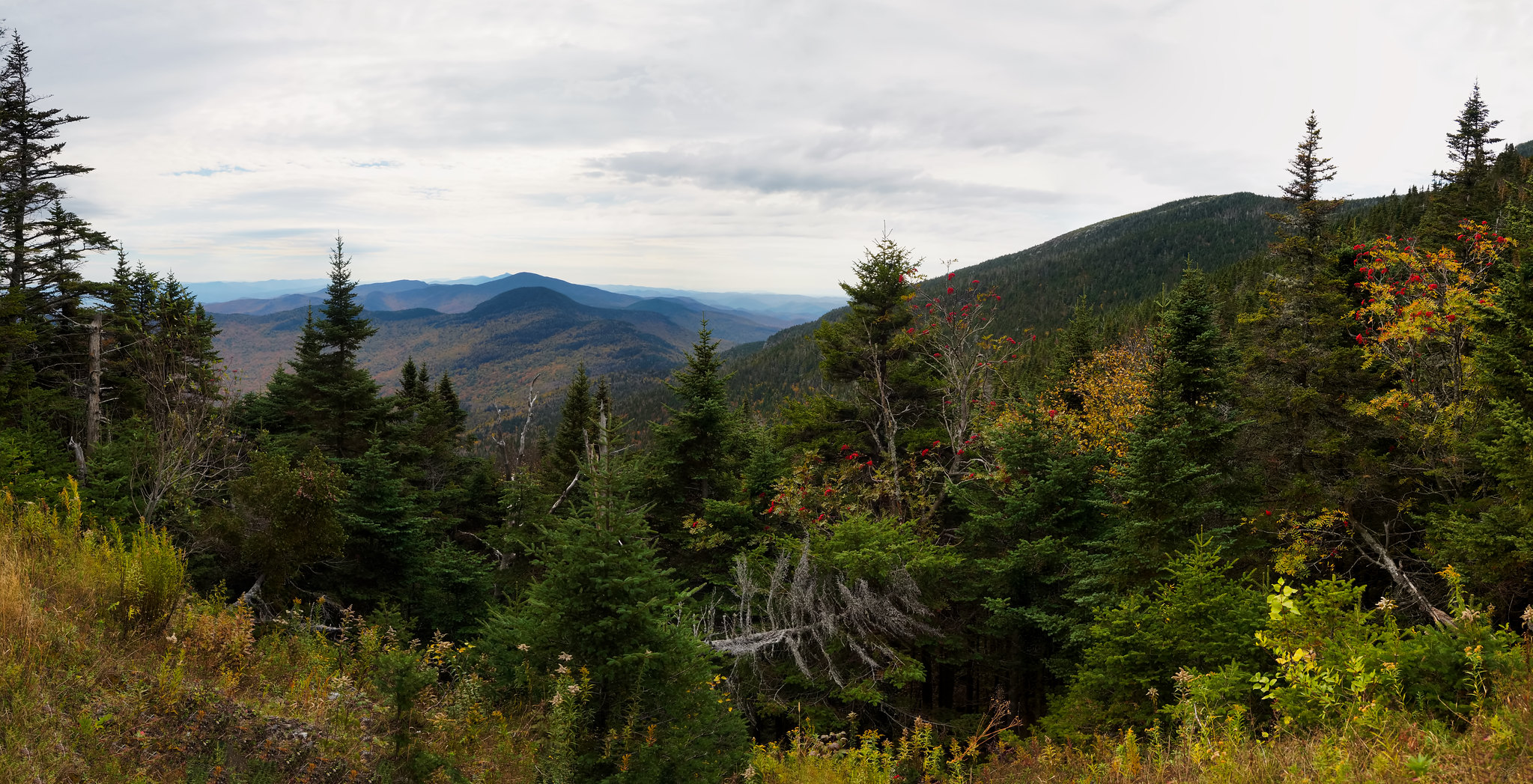 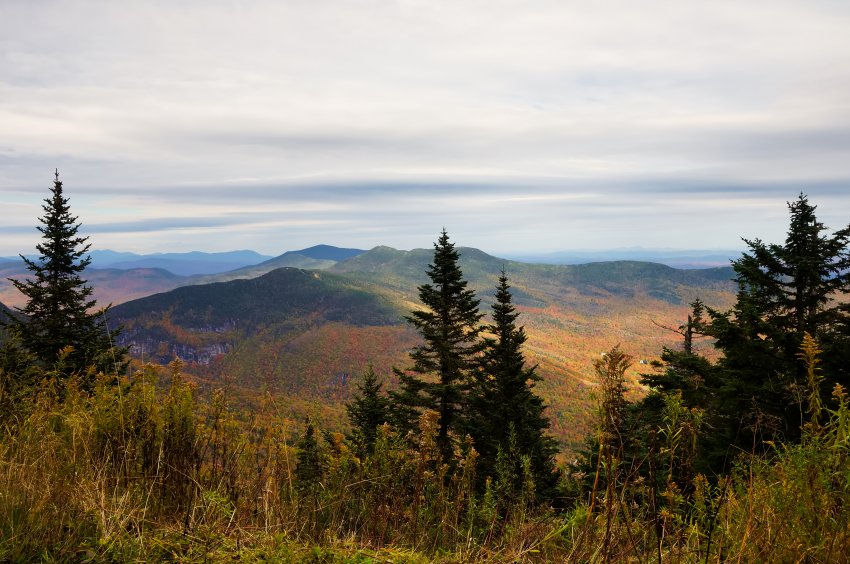 A few interesting spots on the way home. I kind of liked this round barn with two VW’s parked outside. I also stopped at Waterbury State Park, VT and took Joey for a short walk along the lake so he could conduct business. 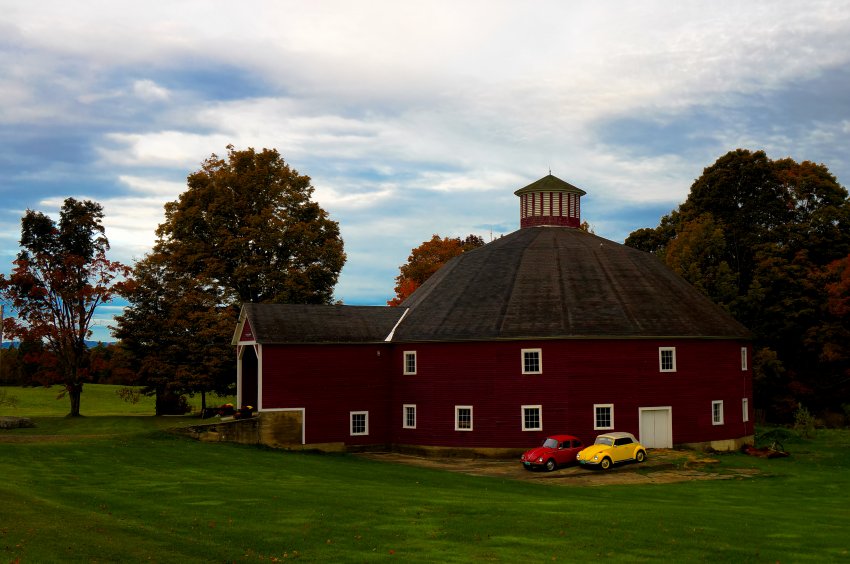 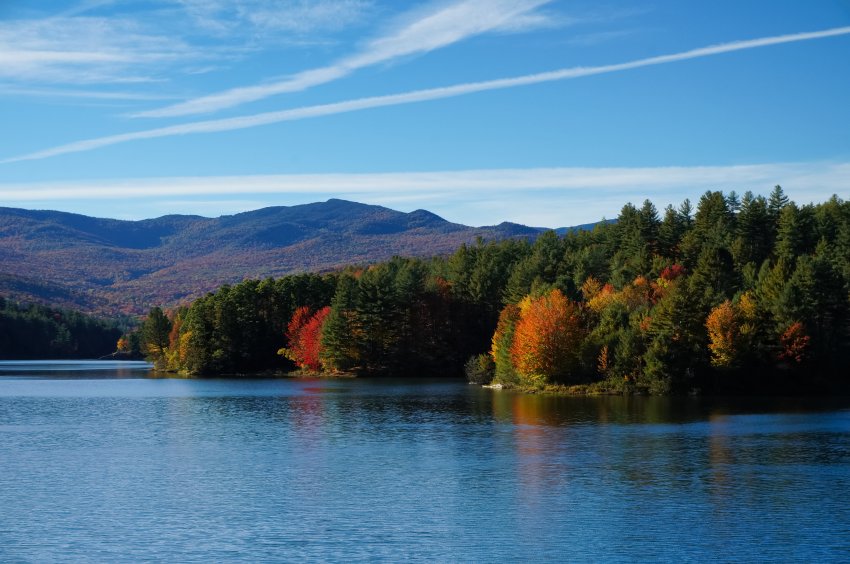 Next week, the foliage should be close to peak right where I live, so I’ll probably do an overnighter in the Catskills, Shawangunks, or my local park (Harriman State Park). I’m hoping that the weekend after, I’ll still be able to head south to Virginia to catch one final weekend of Fall color.

For the sign... in Quebec the signs were in french, but the signs were on skidoo (snowmobile) trails that were just about as busy as main roads in winter.
If it is not for snowmobiles, then maybe grooming the trail for cross country skiing or snowshoeing?

Those colors are beyond my imagining as a westerner! Love it!

Scott Chandler said:
Those colors are beyond my imagining as a westerner! Love it!
Click to expand...

It is the one scenic consolation prize we get east of the Mississippi. Sadly, it only lasts a few weeks. And the yellow aspens in the Rockies are nearly as cool anyway.

Beautiful, great shots! Can't wait for the colors to peak here in north Georgia.
There is no path to happiness: happiness is the path

Dang, now that's color. The range is so impressive. Around here things tend to change in batches of pretty similar colors. Gorgeous photos. Thanks.

Beautiful pictures. Love the round barn.

Beautiful ! Thanks for sharing- awesome photos. You see that everywhere in Vermont and upstate NY between early to mid October (coming soon), but it is a lot more difficult to capture so well in photos. Love the rolling hills, colored Maple trees and the green grass. Well done.
Waiting for the Maple tree colors to unfold their glamor in our backyard in 2 weeks from now. My favorite time of the year and Vermont is especially nice with so many Maple trees.
Last edited: Sep 23, 2018
You must log in or register to reply here.
Similar threads