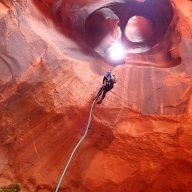 <iframe width="100%" height="500px" src=" Click here to view on CalTopo"></iframe>
Note: the route of the trail on this map is approximate. For better info consult the Trails Illustrated "Mazatzal and Pine Mountain Wildernesses" map.

This is a trip I’ve been eyeing for awhile. The Verde River cuts a swath from northern Arizona down to Scottsdale, AZ. The heart of the river is 55 miles from the White Bridge near Camp Verde, AZ, to Sheep Bridge in a remote part of Yavapai County. The wild and scenic part of this section, between Beasley Flat and Childs, contains the best whitewater and is bounded by three separate wildernesses: Pine Mountain, Cedar Bench, and Fossil Creek, the third of which contains a navigable waterway of its own. Below Childs, the Verde flows for 30 extremely remote miles through the 250K acre Mazatzal Wilderness.

The combination of a free-flowing, undammed waterway, whitewater that is fun and challenging but (with one exception) in the easy Class III range, and a huge trail network adjacent to and along the river should be like catnip for packrafters, but there’s a surprising paucity of information. The local packrafting group hits the Verde regularly, but the focus has almost entirely been on standard car-enabled runs, using packrafts as glorified inflatable kayaks. There’s been little focus on developing the kind of hiking/rafting combination routes that are unique to packrafting. So a few weeks back, some friends and I went to scout one route option with the best potential.

The hike departed from Sheep Bridge. Sheep Bridge is a reconstruction of a "pedestrian" bridge (people and sheep) that was built by the Flagstaff Sheep Company to allow safe crossing of the Verde River. The area had been used by the company for sheep ranching since 1926, and the 691-foot long bridge is on the national register of historical places. It’s in an extremely remote area about 40 miles of dirt road driving from north Scottsdale. The road is in pretty decent shape and is easy travel-able by a HCV, though be careful of deep sand if you drive down near the river itself.

From the Sheep Bridge trailhead, the first day consists of 8.5 miles travel north along the Verde River Trail. This trail climbed through foothills along the river, usually within .5-1 mile of the river itself. The trail was more scenic that I expected, and easy, with no more than 300-400 feet of elevation gain at a time. Perfect for a heavy pack laden with packrafting gear.

After 8.5 miles, the trail swung down again by the fall-color lined waterway.

The trail fords the river. At 180 CFS, this flow was crossable on foot, but swift and waist deep. There’s a small riffle downstream of the crossing, so I wouldn’t want to ford it unaided at much higher flows than that.

There’s a great campsite on the north side of the river, at the mouth of Red Creek. This would be a decent camp for an overnight trip, floating the river out the next day. But after a night’s camp, we chose to press onwards along the Verde River trail.

From Red Creek to the next ford of the Verde is 5.5 miles. Again the trail is easy with limited elevation gain.

Unlike the first section of the trail, the trail tread here deteriorates and becomes harder to follow. There’s a lot of cairns, though, so its not too difficult to get back on track.

As we headed down to the river, we saw a herd of javelina.

Finally, after a day and half hauling heavy packs, it was time to put in. We transitioned from hiking mode to paddling mode and headed on down the river.

Thanks to the circuitous route of the river around Mule Shoe Bend, it would take us 8 miles to paddle back the 5.5 miles we had hiked from Red Creek. The paddling was relaxing after a couple days on the trail.

There are no named rapids above Red Creek on this section of river. But there were a number of small riffles and even what I would call easy Class II rapids. I suspect a lot of these would get washed out at higher flows, but at 180 CFS, they were fun to run through.

While the rapids weren’t stressful, the one kind of spooky aspect of this river is narrow passages through giant reeds. You would often have to commit to a reed tunnel without any sense if the passage would go or not. I’ve heard the Verde called a Class III river with Class V strainers. While this is an exaggeration, you definitely do need to stay on your toes. With some good choices, we were able to make it back to Red Creek for a second night’s camp, with only one portage required.

The final day on the river was more of the same. From Red Creek, its 9 miles of river back to Sheep’s Bridge. This section of river contains 4 named rapids, two of them in the Class III range. The first of these, Red Creek Rapid, lies just below camp. While these rapids had steeper gradient than anything we’d seen the day before, at this flow level, none were stressful. There was lots of technical maneuvering required between rocks to get through each rapid, but the potential consequences of a mistake were limited.

One of the cool aspects of the Verde is it’s a prime location for over-wintering bald eagles. Multiple stretches of river are designated as no-stopping zones to protect eagle habitat. I’ve seen bald eagles on numerous Verde trips, and this trip was no exception.

Just before reaching Sheep Bridge, the river entered an extended reed tunnel. Prior to this, you might have to commit to a reed tunnel, but it would be over in 20 seconds. This final hurrah had us paddling through reeds for a good five minutes, with no clear idea if we would run into a nasty strainer at any point in time. In retrospect and having made it through safely, this section was a lot of fun, but kind of spooky to do at the time, and would be really crazy at higher flows.


The river delivers you to a beach at Sheep Bridge, and it’s a short walk uphill back to your vehicle. Really awesome trip overall, and one of the best packrafting trips I’ve done in AZ. Salt River and Grand Canyon are both highly regulated. Verde gives you the opportunity to run more than the Grand Canyon’s five-mile limit, with tons of hiking options nearby, and no permits required. I look forward to stitching together more routes through the area.

Thanks Bigtime for this Trip Report. For sometime going here to the Verde and the Mazatzal in the winter to hike and wander for abit has been big on my list. Sometime I will get down to this country. Enjoyed tour trip report and video! Wishing You the Best!
Last edited: Dec 18, 2017
' At The End Of The Road Where The Trails and Life Begins ' - Message on a sign near Cody, Wy.

Thanks for the video, I was having a hard time wrapping my head around reeds and strainers, but seeing what you were dealing with makes it very clear. Looks like an awesome trip.
My trip reports: backpackandbeer.blogspot.com

Very nice. We do some river canoeing and sea kayaking, now I have to add desert paddling to the to-do list. Obviously this river is not suitable for our 16 footer, though! You mention "a few weeks back", and "fall colors". For someone not at all familiar with this region- when specifically?
https://steveriggs.smugmug.com

We did this on the first weekend in December. The river primarily has boatable flows in the spring, and during summer monsoons. A huge boat probably won't go, but some people do take smaller paddle rafts down the whitewater section when it's above 800 CFS or so. With a packraft or IK, people boat this river down to 120 CFS, which opens up the season to fall through spring.

Sent from my SAMSUNG-SM-J320AZ using Tapatalk

Nice, worked on the Forest there many many years ago.....visited and hiked around the sheep Bridge, Horseshoe Lk area alot ... Interesting to see the bridge is still there ... bout burned in fires a few times... Contemplated a thru hike along the Verde years ago, but never did. Some rugged country thru there.
' Not All Who Wander Are Lost '

Awesome. Thanks for posting. Those reed tunnels on the Verde are freaky! One of my favorite musicians has a great song about the Verde River (he lives in Jerome). The lyrics seem more real after seeing that video of you bombing through the reeds.

Onward through the fog.
You must log in or register to reply here.
Similar threads