Valentine's Day lava - a rainy day at the flow

Rainy Day at the flow

Valentines Day lava - my plan was to hike way up to the Pali and check out the flow up the there again. But mother nature always has different plans. While I was hiking out it started to pour and was getting worse and worse. For sure, this was no day to hike up to the pali. It would be way too dangerous getting caught in a whiteout up there with massive lava flows all around me plus the extremely steep cliff where one wrong step could be fatal. So I decided to go to the regular lava flow instead. I was already wet, so I didn't mind. I managed to check the radar on my phone and a huge rain cell was hanging over the area. I still had hopes that it would move out within the next hour as it often did. Okay, forget about wishes and face reality.

I was already three quarters done when I saw the big white steam cloud ahead of me. Great, this will be another whiteout day in the field. I walked around the eastern edge of the whiteout and continued to go. Every rock, tumulus mount, and each corner was more than familiar to me. If I would end up getting stuck in the whiteout at least I knew where to go. For a few minutes, I was completely surrounded by hot humid steam but I was so close to the pali that the wind shifted suddenly and my view was clear.

The lava was just a few hundred feet ahead of me, and it looked amazing. So much activity coming down the Pali, wow. As I walked along the edge of the Pali I kept walking out of the steam and soon reached the surface flows in the pouring rain. What a sight!!! Rivers coming down in several places. It rained so hard that it made a crazy noise on the hot lava. Not just the nice sizzling sound when rainwater hits it. It sounded like a hurricane. It rained so hard that I could not even set up my camera and take a few shots.

Here I was, way too early out in the field at 5:20 am and hoped the rain would eventually stop. It was just me and the weather. The spot where I was standing at was completely spared by the whiteout and the hot and humid steam. Everything else was covered in white, there was no sight at all. This was for sure no place you want to be in in the dark if you have no clue how to deal with it. I felt extremely comfortable where I was. It was loud and peaceful at the same time. It thought of my friend and colleague Sean who passed away earlier this month in a whiteout out here in the field. He must have experienced something similar while he was caught in it. He might have felt a peaceful moment as well, who knows. I was only a few hundred feet away from the spot where he was found that day. I miss you brother, you're probably smiling back from where you are right now.

I stood there for more than an hour, took advantage of short breaks in the rain and captured the beauty of Pele. She even smiled while letting her fiery hair down. It was mesmerizing. 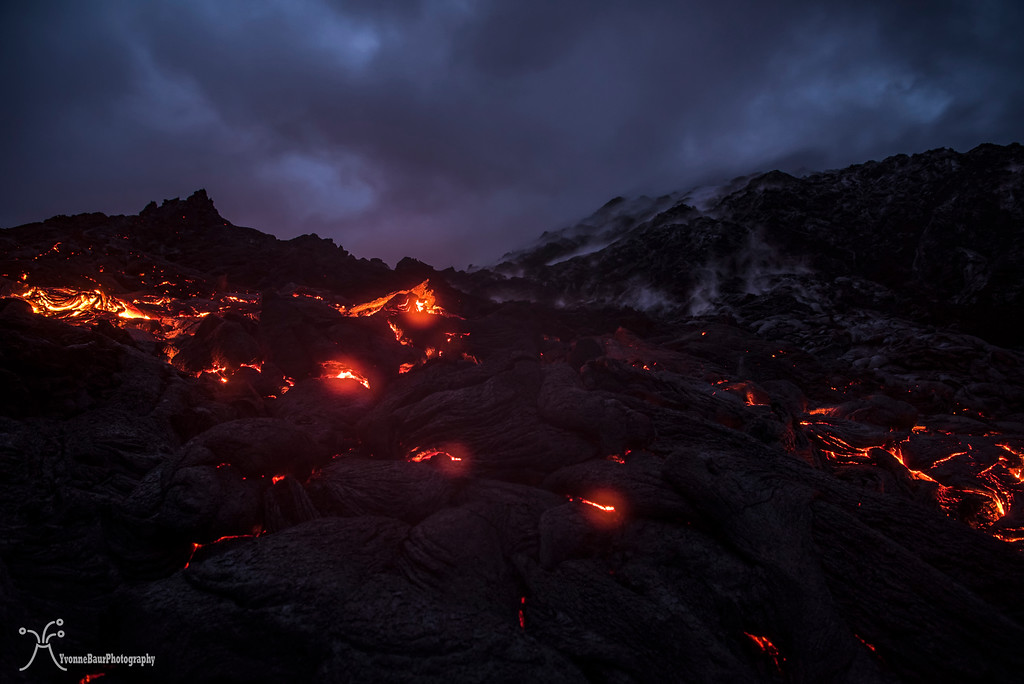 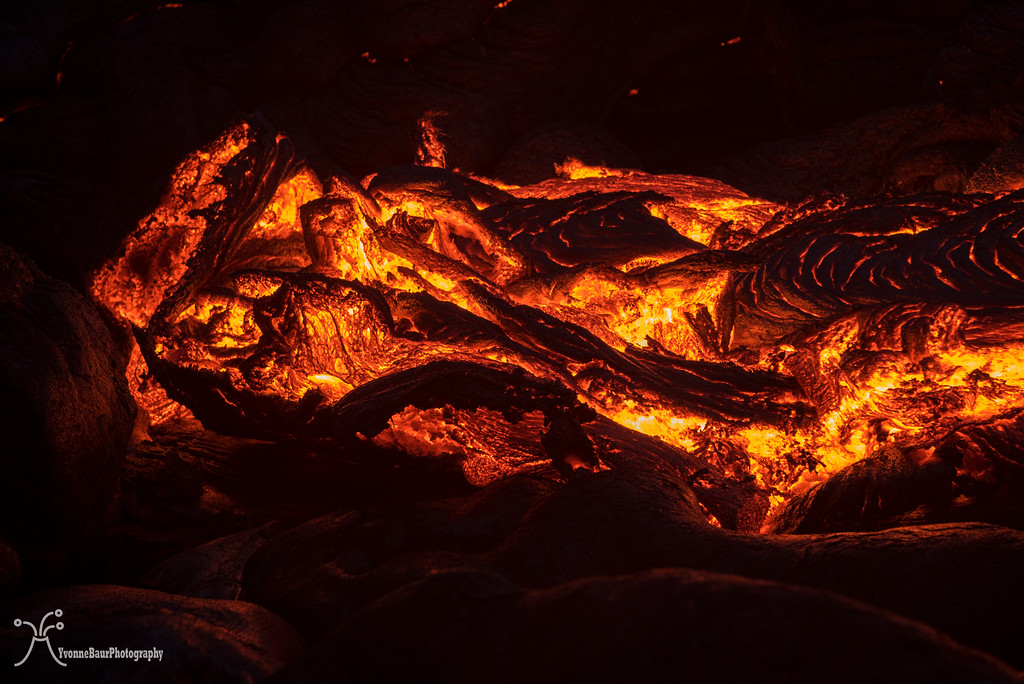 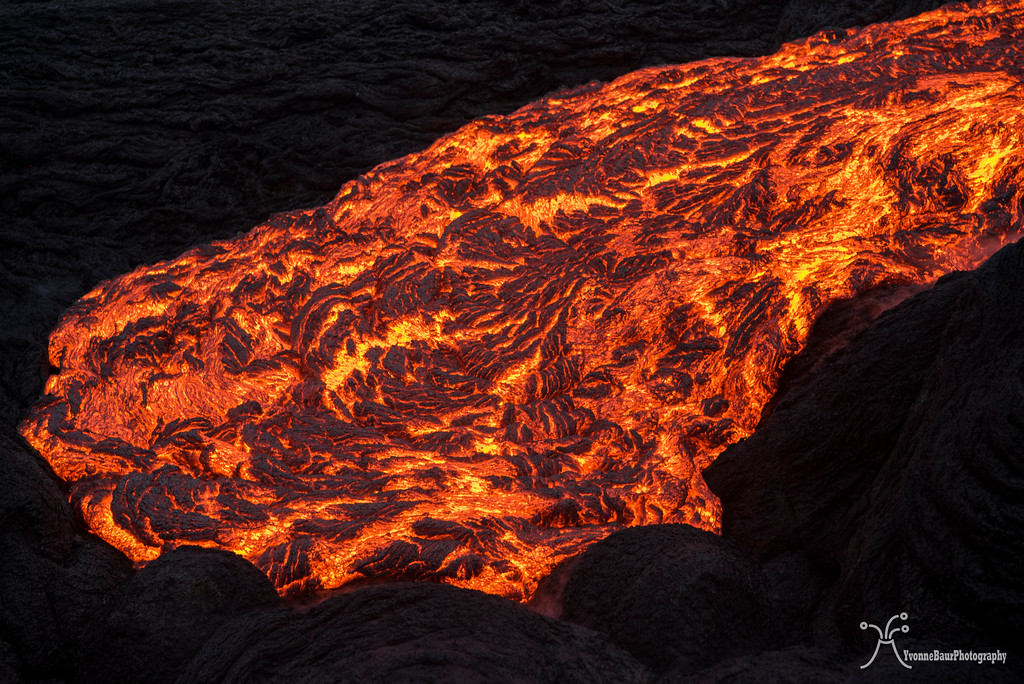 Eventually, dawn arrived and a short break in the rain offered me a view of the coastal plains lava field ahead of me. Fog and steam were creeping along ridges, crevices and across the old lava. It looked absolutely beautiful. I took a few shots, it was magical. Even weather like this has its own moments. Rainy days aren't necessarily bad days to be out, but they are for sure days to be aware of all your surroundings. Things can deteriorate within seconds.
It was all over soon after when the first crazy tourists arrived who had ventured out this morning and somehow managed to get out of the steam. Our own Epic Lava tour with a great group showed up a bit later and my boss looked a bit astonished to see me out here in the rain on my day off. But I had a special morning out here in the rain today. The whole experience was worth it to get wet and to stay here in the pouring rain for a long time. 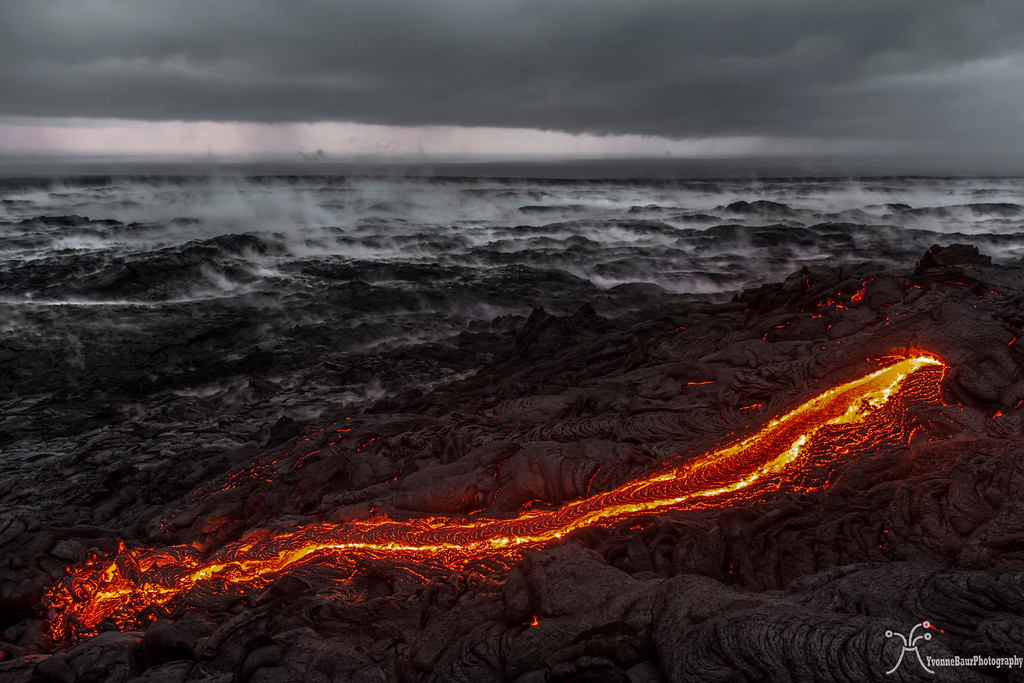 steam rising from the hot surface during a clear moment 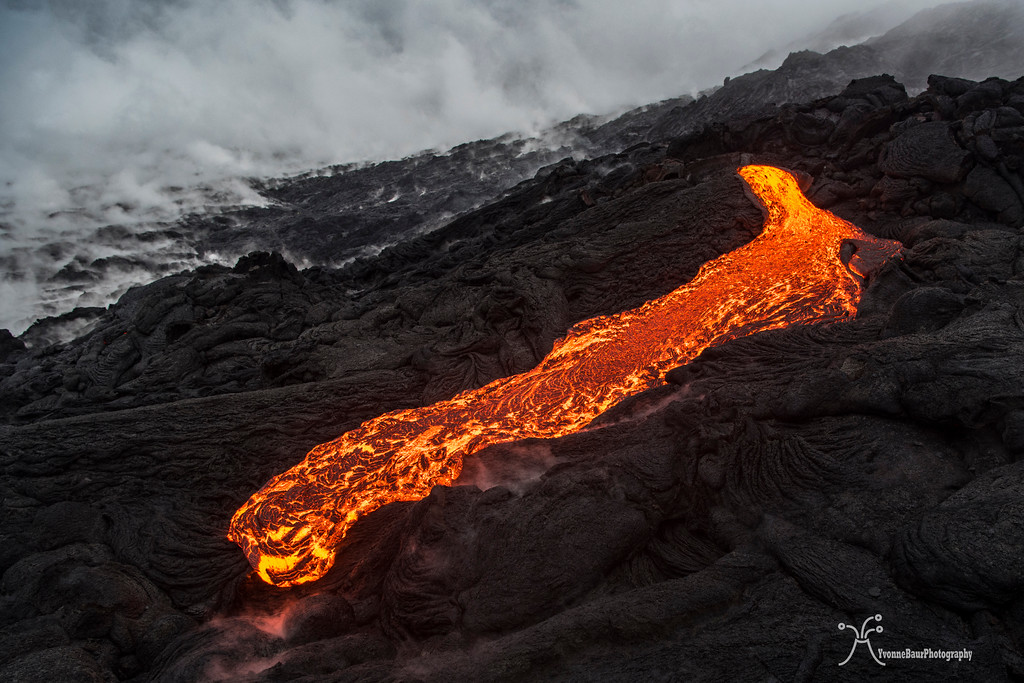 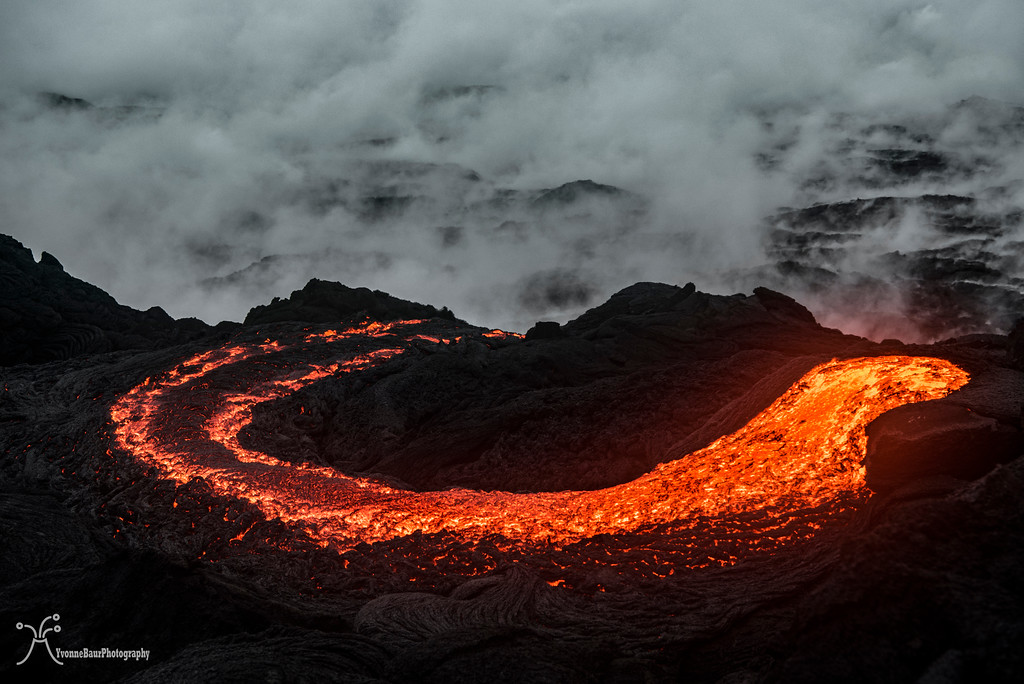 Do not hike out in conditions like I experienced today unless you know what you are doing, what to expect and how to deal with a serious whiteout. These conditions will let you lose all sense of place and it can get so bad that you cannot see your own shoes anymore. You will likely be caught in hot steam and you are completely blind. 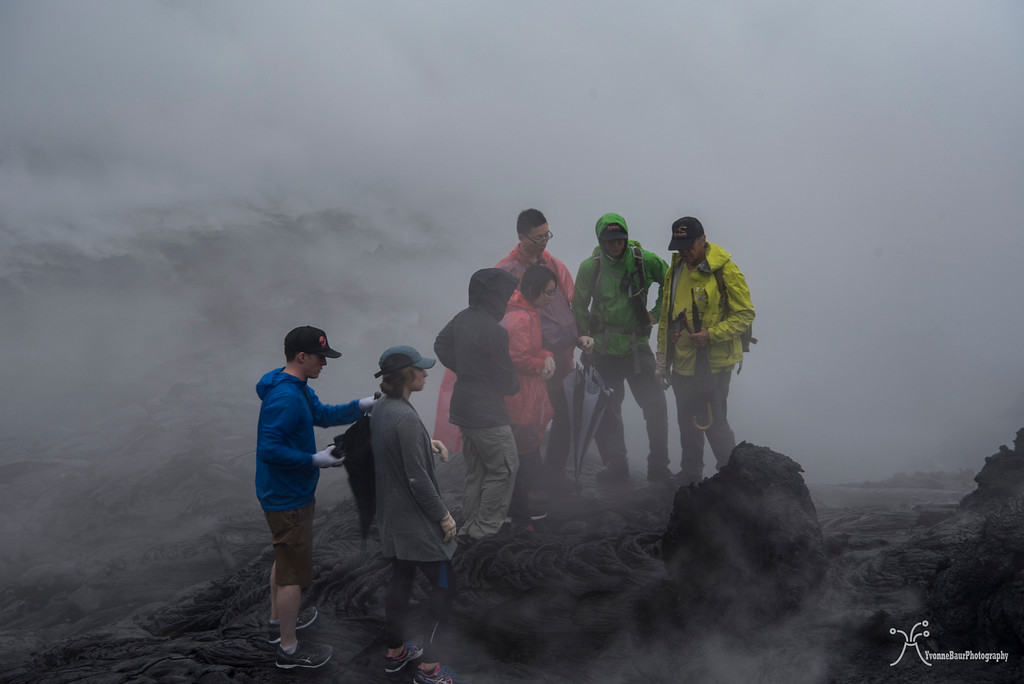 Where do I need to go? Whiteout creeping up and surrounding some visitors 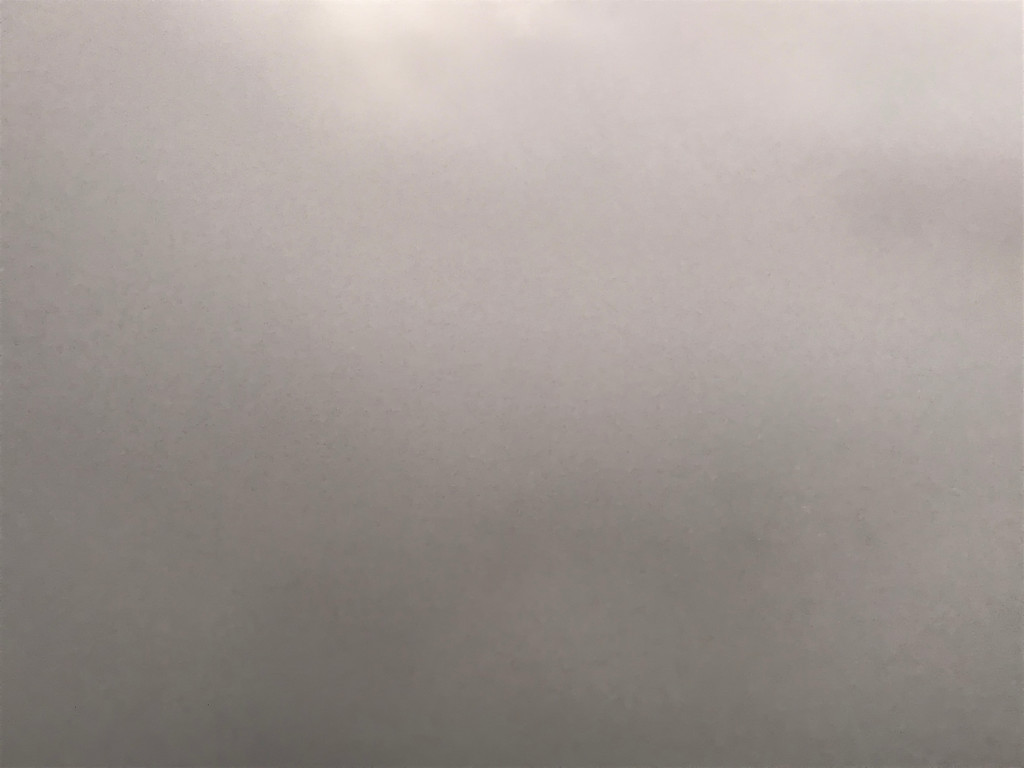 the view inside the complete whiteout, I couldn't see my own shoes 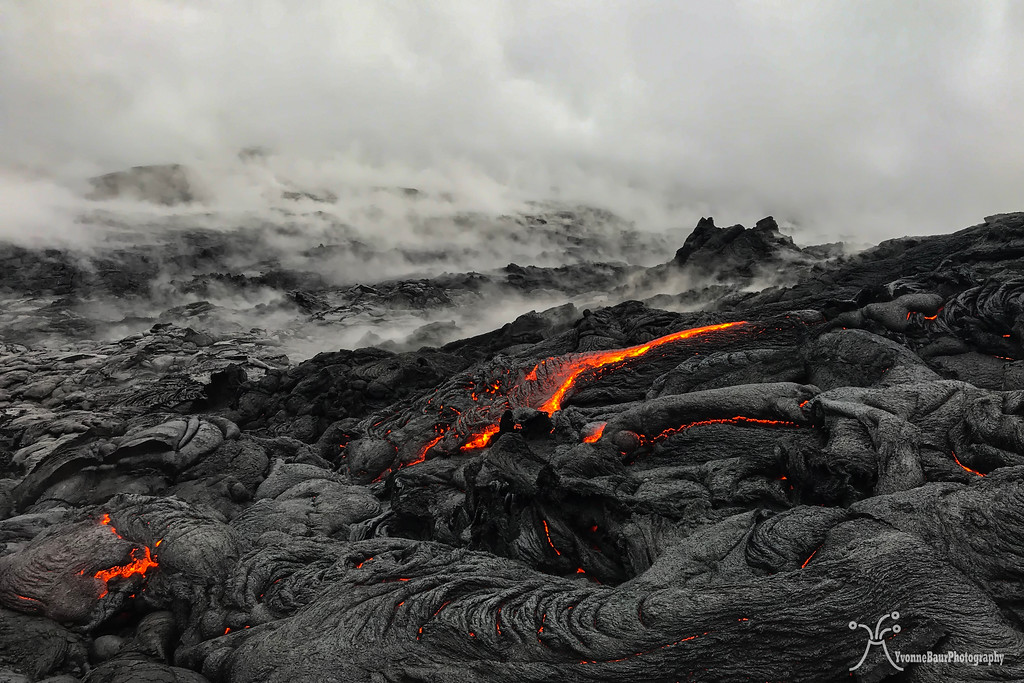 it clears out a bit

Unless you know how to get out of it and deal with this situation, don't ever hike out in heavy rain. You can't see the surface or anything else around you. Temperatures might rise to more than a 100F inside the hot steam cloud with a 100% humidity. The steam is thick, it's like being caught in a massive steam bath. 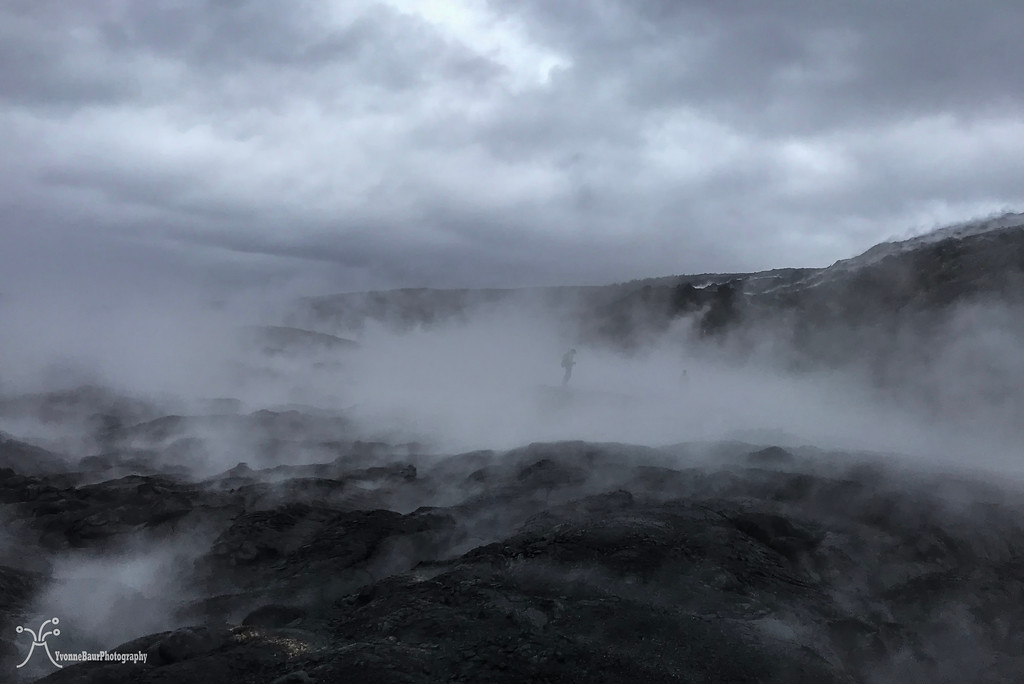 two of our guides covered in a developing whiteout 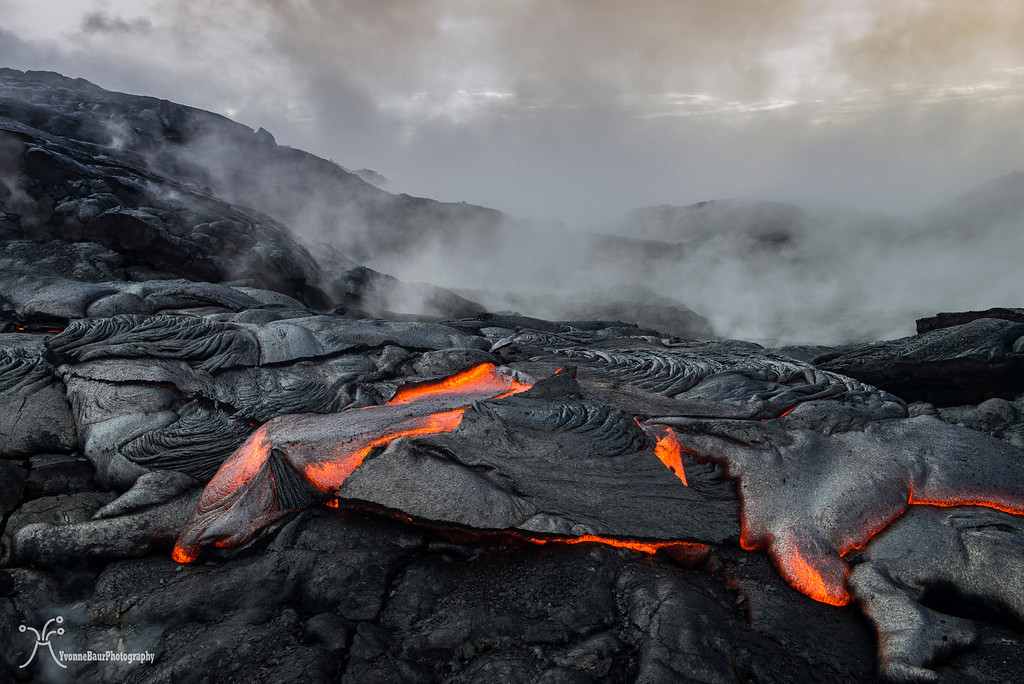 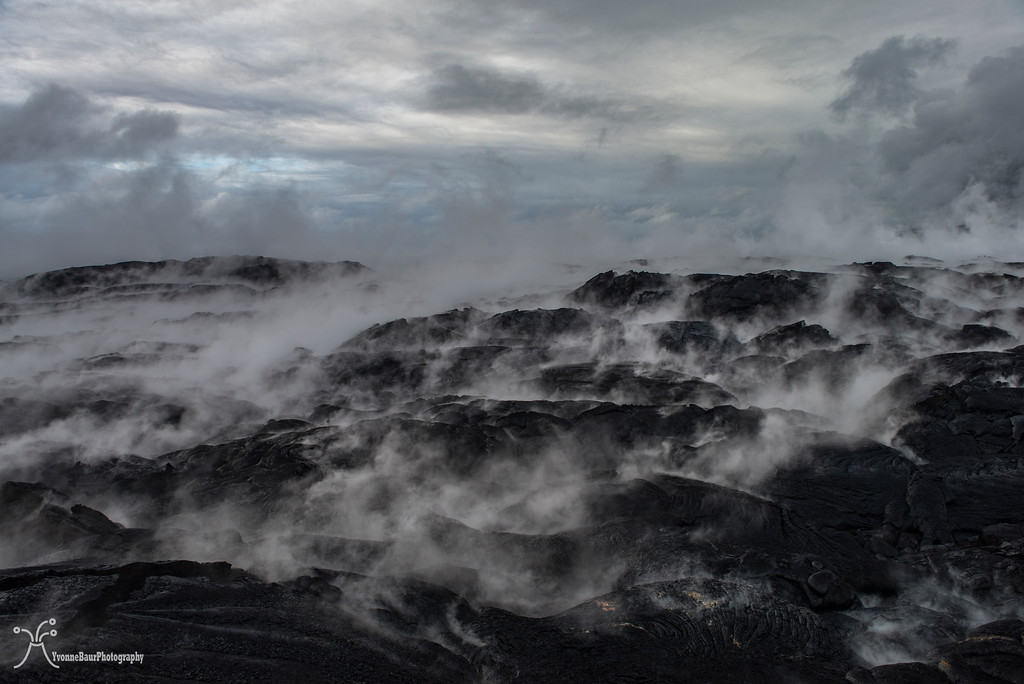 a short break before more severe weather moved in

You need to hundred percent know what to do and how to get out of it if it worsens. Leave days like today to the experienced tour guides and lava hikers who know what to expect and how to deal with it. Wait a day or two and hike out to the flow when it's safe to do so.
http://yvonnebaurphoto.smugmug.com/

Beautiful photos and narrative. The meeting of water and fire. Some day I will get to Hawaii.
Instagram
@gregwattsphotography

gnwatts said:
Beautiful photos and narrative. The meeting of water and fire. Some day I will get to Hawaii.
Click to expand...

let me know and I hike with you to the lava.

and for sure, it was fire vs. water, not sure who won that day. Lava doesn't care if it rains. It still flows and moves forward. That's the cool thing about it.
http://yvonnebaurphoto.smugmug.com/

Checked out your page and was stunned. There is a globular mass of cooling lava and the surface looks like carnival glass. I love it.
Onward through the fog.

Checked out your page and was stunned. There is a globular mass of cooling lava and the surface looks like carnival glass. I love it.
Click to expand...

thanks
It also reminds me to update the page with more recent stuff. I guess I have way too many lava trips and images that needed to be uploaded
http://yvonnebaurphoto.smugmug.com/

Unbelievable! You explained how the whiteout can be dangerous.. this might be a stupid question but how dangerous is it being near the lava? How close to it can you actually get? Thanks for a great report.

Vegan.Hiker said:
Unbelievable! You explained how the whiteout can be dangerous.. this might be a stupid question but how dangerous is it being near the lava? How close to it can you actually get? Thanks for a great report.
Click to expand...

the lava itself is rarely dangerous, if at all. It only becomes dangerous way up the Pali where I do my scouting trips because the tube system runs below you at certain spots. The ground can be really fragile and old lava on top can break and expose the flowing river below you. We guides do know where we need to go and where it is not recommended, so for that part no worries.

When you see the surface flows you can get as close as you want to as long as you can tolerate the radiating heat. If it is too hot, you naturally step back a few steps. I often go so close that I'm only inches away and often burn the hair on my arms. The heat has also destroyed some of my expensive glass filters because I made the mistake to touch them after I exposed my camera and lens to the heat. The glass simply cracked.

Between 1999 and 2009 there have been 45 deaths out in the field. But no one died because of the lava. They usually died because of stupidity or dehydration. One of our guides worked for 35 years as a criminal investigator in the park. He was the one to pick up the pieces of those who expired out in the field. He has some really interesting stories to tell, that's for sure.

I'm always more worries about whiteouts. They can be really dangerous, especially when you have a stationary storm system and they do not move out and stick to an area for hours. Usually, whiteouts move in and out fast and barely stick longer than about 30 minutes to an area. The whiteout that killed my friend was there for hours and he died because he was in it and the extreme heat and humidity completely dehydrated him and he passed out and hit his head too hard on the ground. That's some serious stuff, I've been in many whiteouts before but always managed to get out of it before it was getting too extreme. The one time I was in for almost 40 minutes and the extreme humidity and the 100-degree hot steam was almost unbearable. I was so soaking wet because I was sweating so much it was unreal. So fewer lava dangers but more other dangers out there in the field.


Just to show how close you can go: here I do sit conveniently less than a foot away 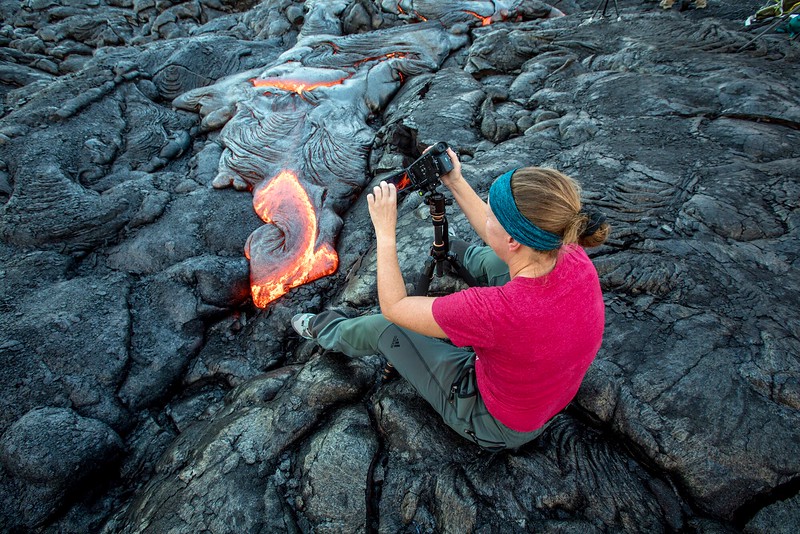 That's weird. I work with molten glass, 2200F, and you likely wouldn't be that close with bare arms.
Onward through the fog.

Glasterpiece said:
That's weird. I work with molten glass, 2200F, and you likely wouldn't be that close with bare arms.
Click to expand...

the lava toes are usually about 1600F, you get used to the heat. But sometimes I do wear kevlar sleeves for protection.
The big rivers have temperatures of 2200F as well and then you simply can't get so close anymore.
But as I told earlier: you can get as close as you want as long as you can tolerate the heat.
And some shots need some sacrifice
http://yvonnebaurphoto.smugmug.com/

here is an example where I stayed way back because the heat was too intense. And I'm wearing my kevlar sleeves.
This was a 30mph fast flowing lava river, 2200F hot. This was a fresh tube rupture and it poured out right of the lava tube system that usually runs below the surface. 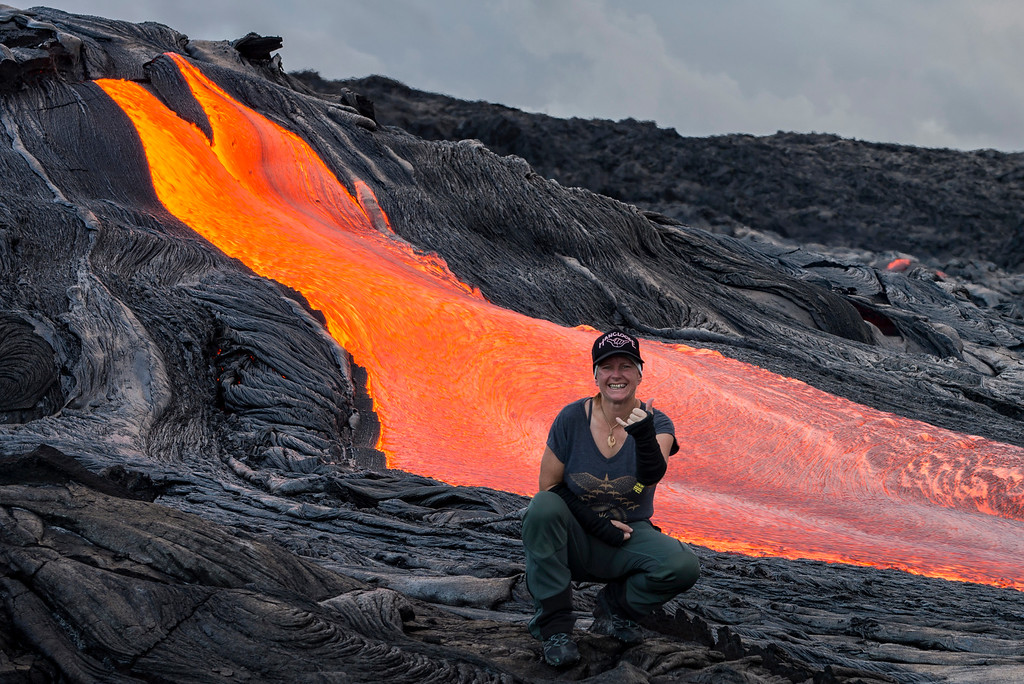 Amazing. Thanks for the pictures and info! Keep 'em coming!

So breathtaking! AND you got to hike in the rain (my fave), although doesn't sound as nice with the lava and the whiteouts.
I don't plan on being near lava anytime soon, but I liked that you explained the dangers. I could see myself just wandering off to get photos and getting stuck in a whiteout. I would have never thought of that happening!
Thanks for your beautiful photos!

That is fantastic!! Seeing Lava flow is on my bucket list.