Posting this as right now seems the prime season to knock off such a canyon classic; and folks often wonder about conditions and technical rating.

Over the solstice we (two guys and a dog) did the Upper DH from Hells Backbone to the Boulder Mail Trail exit in 12 hours of walking. Then we took the BMT to the airstrip at the start of the Hells Backbone road in 3-4 hours. A three hour bike ride closed the loop to the car at the top. This latter segment was by far the hardest as the only beater bike we had available to leave in the desert was a single speed townie. During our time in Death Hollow we spent one night camping 10 minutes up Moonshadow Canyon (unnamed, 37.85537, -111.54041), a fantastic spot with views.

Technical rock difficulty: No special gear needed if using short and logical walkarounds. We had some webbing but never used it. Handed packs and the dog down on 4-5 occasions. You can always touch hands on all the drops. The apparent crux is immediately before Right Fork: a difficult entry followed by a very long swim. We bypassed this by crossing into Right Fork via a 5 min cairned detour. To me it would be contrived to attempt the sections of narrows that are so easily walked around. Ideally the commitment factor and difficulty of the technical sections would be a notch higher.

Water difficulty: Many sections above the BMT required swimming, some 100' long. We had sealed and double sealed everything in our packs and usually just kept walking uninterrupted into the holes wearing everything. With the hip belt closed there's a tremendous amount of flotation on your back. Make sure you can bend your neck all the way without hitting the pack, or else it might be awkward/dangerous. Ours were small, maybe 40 liters, and assisted us rather than hindering. None of the swimming exits posed any issues, in other words no 'keeper' holes. Swimming holding trekking poles in the hand(s) was not possible for me, and I also felt better balanced on the miles of slippery submerged river rocks without them, strangely enough. Next time I'll def leave them behind. We both wore Fiveten approach shoes in and out of the water. This trip had more miles of dry hiking, but more time in the water.

Water temperature: While the dog got cold in the upper shady swims none of the humans were even close to being affected. We wore wet clothes for the entire stretch from first water to the BMT and were never cold. I'm skinny and normally temperature sensitive. It was in the 90's in Escalante that day. Some flows felt too warm, and algae seemed rampant. We had spare clothes and puffy jackets along plus warm sleeping bags - however I never wore anything but the swimming clothes, even at camp, and barely got in the bag all night. In a perfect world one would do DH with air temps in the 60's and the water like we found it. Alas. Right now is probably ideal, but the dry desert is a scorcher in the summer; bleak and bright and scary. Those sections need to be planned out meticulously and traversed speedily. Or maybe I'm too much of a mountain person to see the beauty of a shimmering white oven dotted with crispy dry vegetation.

Water for drinking: the 'brown streak spring' consists of two dirt lined potholes the size of a dinner table and no seeps or flows. It's off to the left side and while pretty obvious could be missed. The upper hole is good, the lower one nasty. Looks like they are evaporating fast. This is 4 hot hours from the car. A couple more hours should deliver shady pools in the canyon proper, while water is everywhere below Right Fork. The BMT is of course dry, although it conveniently crosses the perennial stream of Sand Creek precisely halfway. 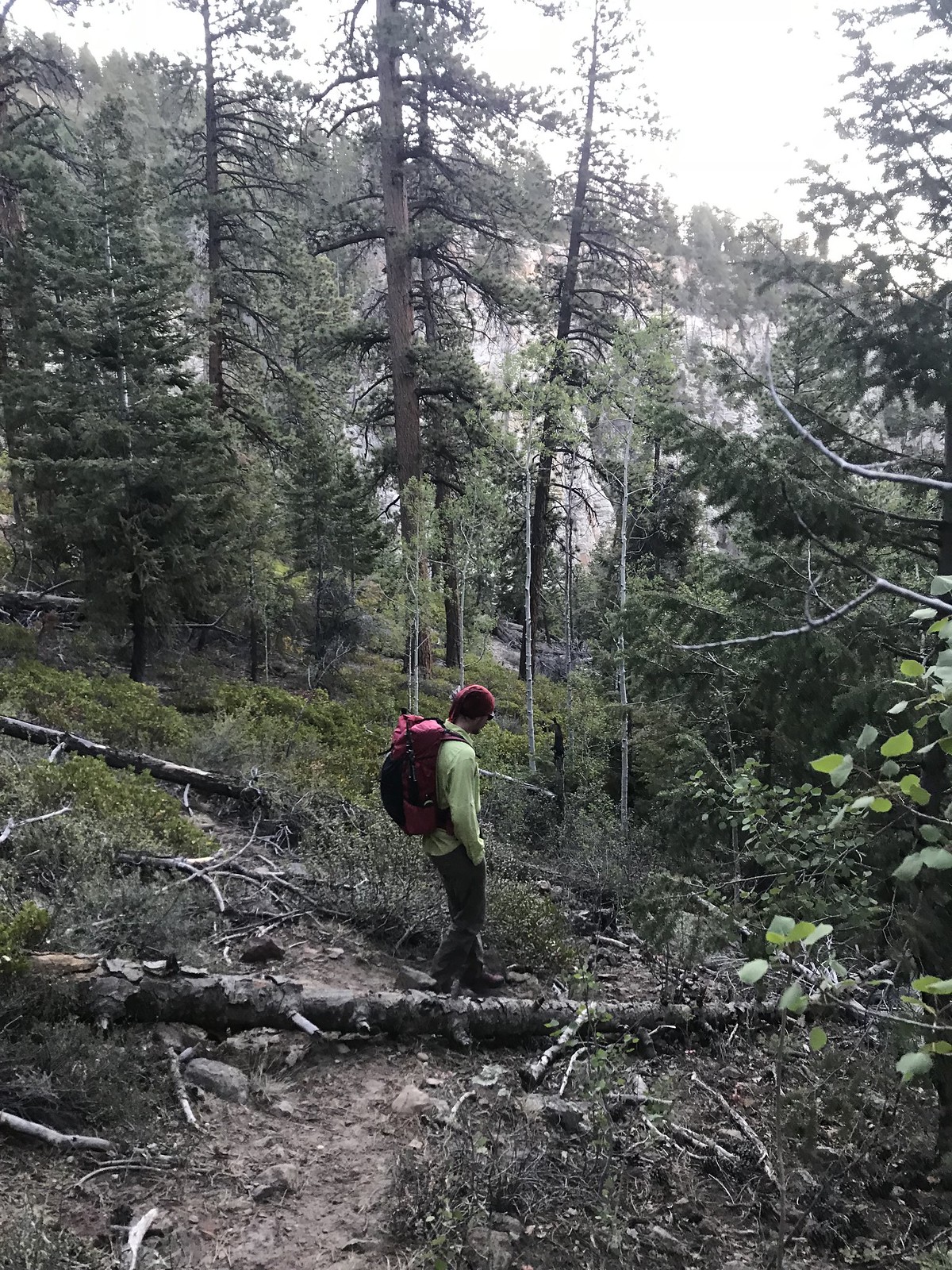 The beginning is an indistinct steep trail leading down a thickly forested slope for 500'. 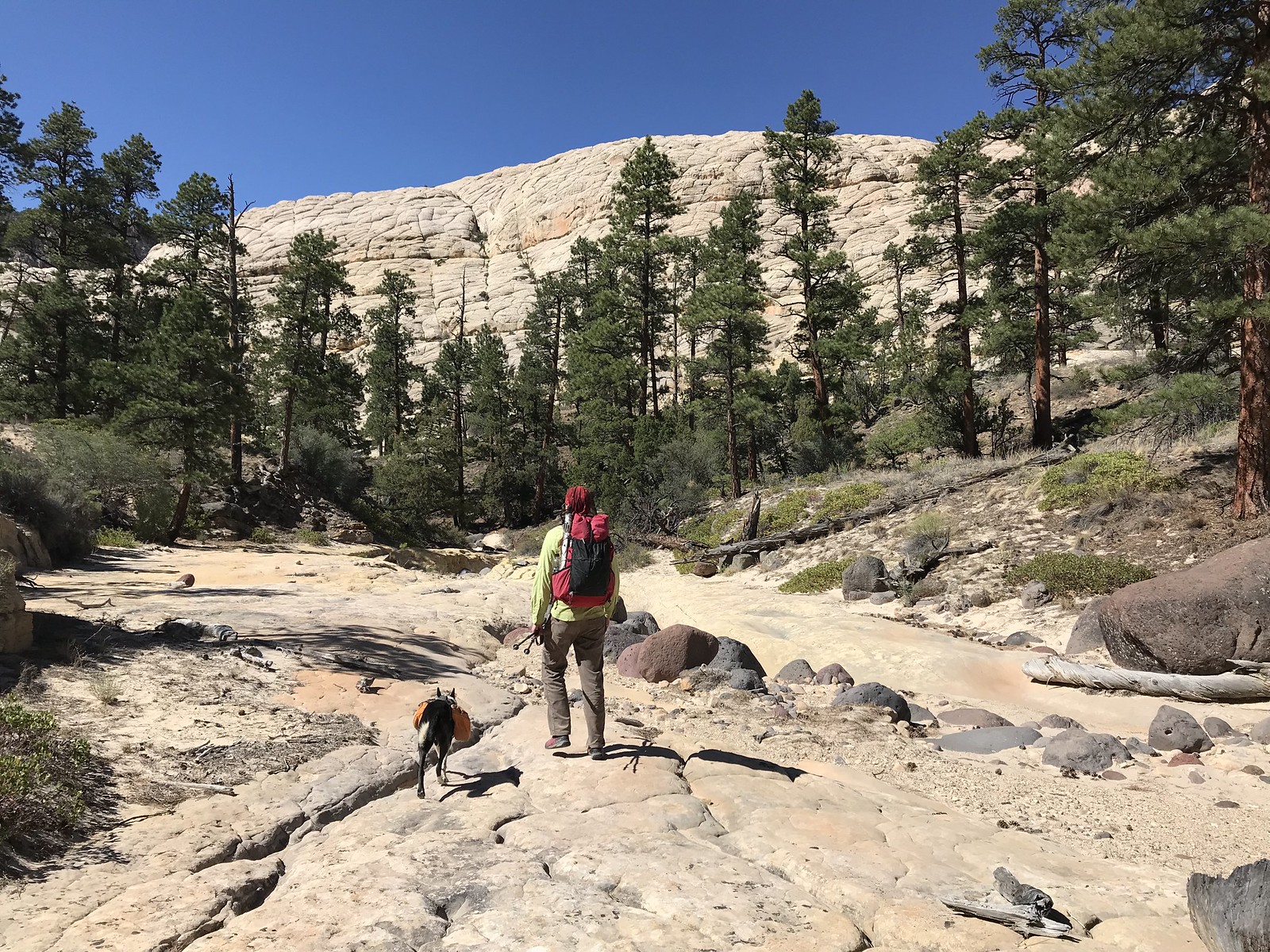 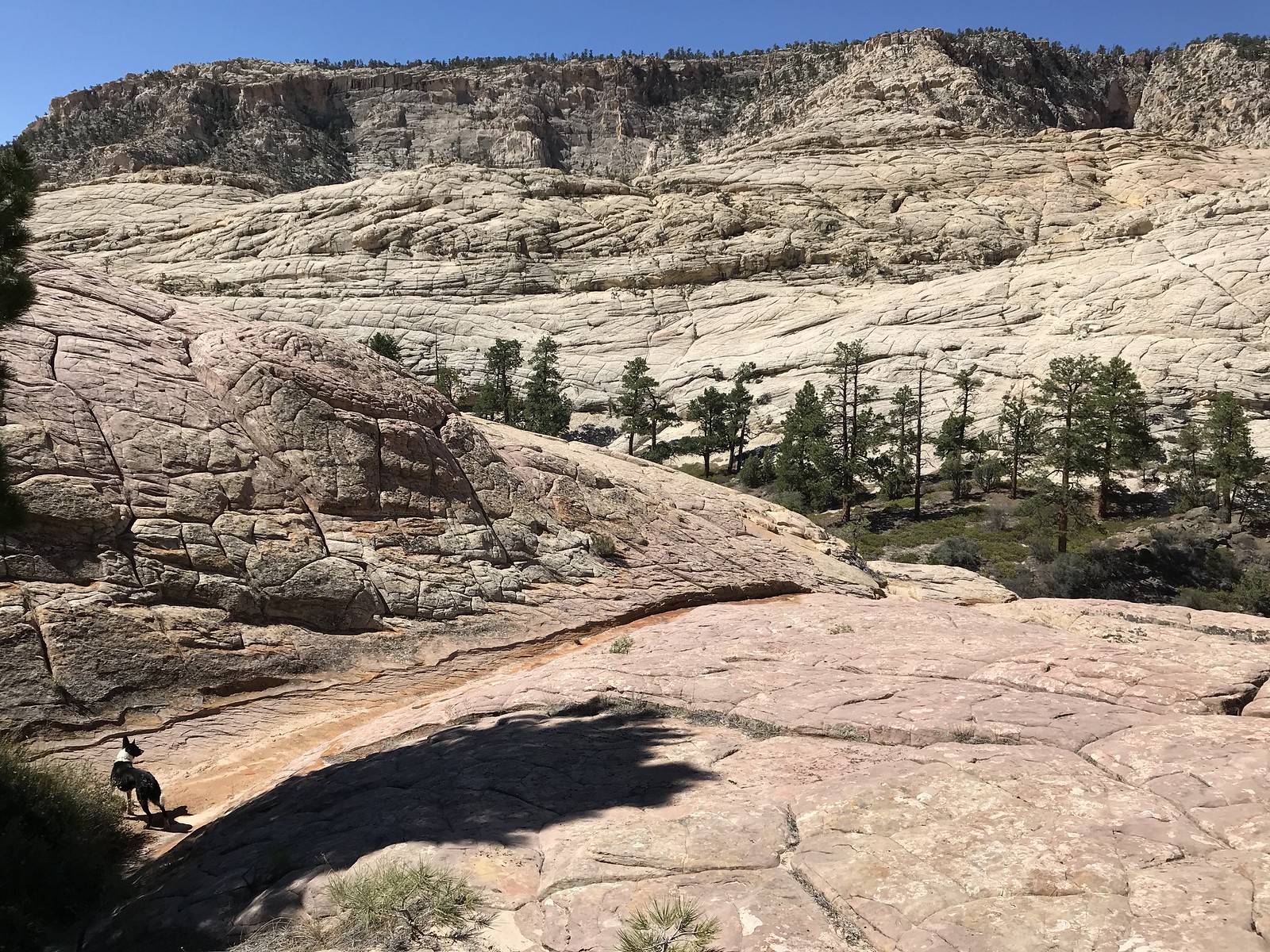 The beautiful location of the 'brown streak spring'. Would make a serene camp spot for parties with a late start. 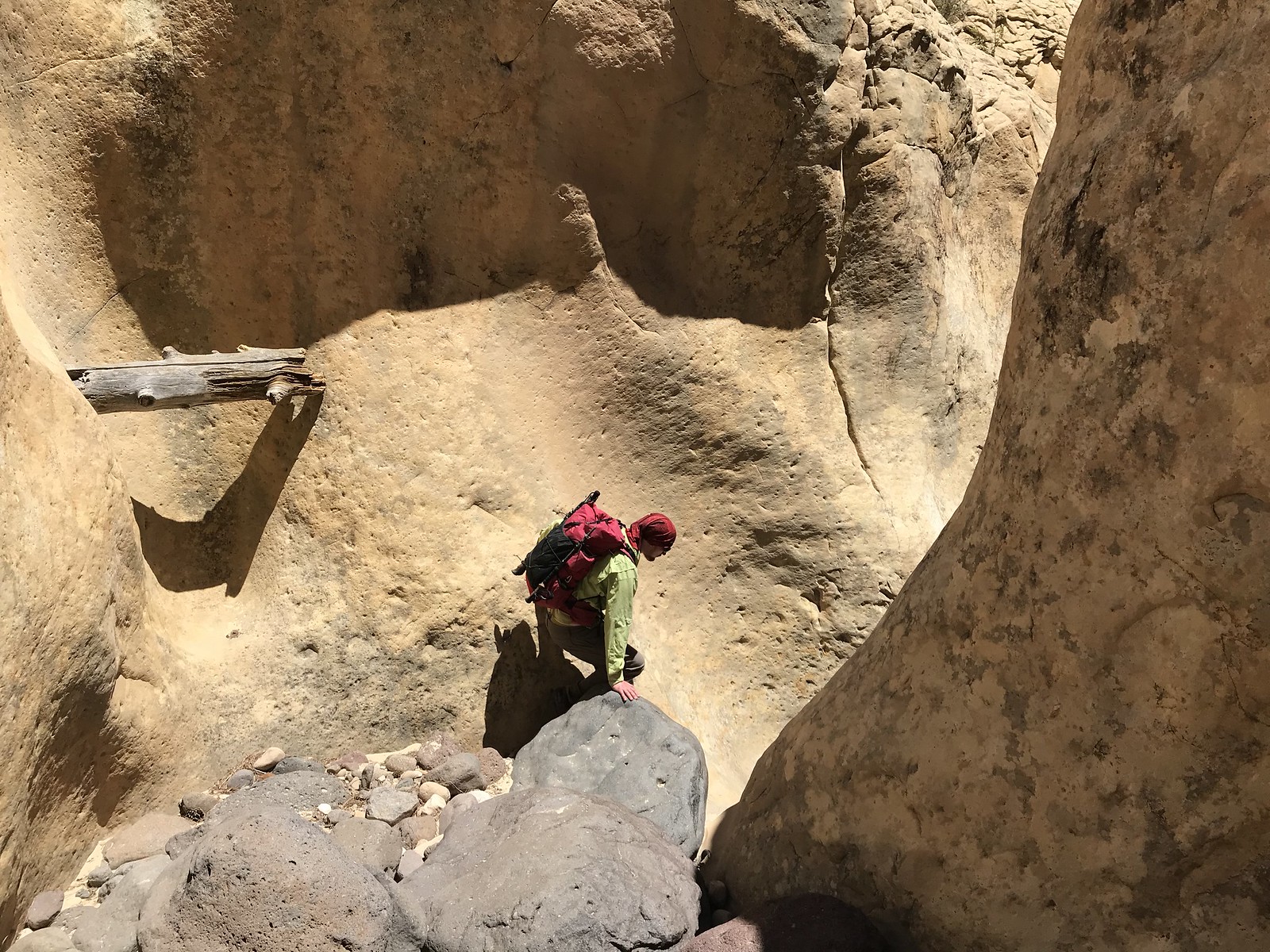 Fun challenges begin after the spring... 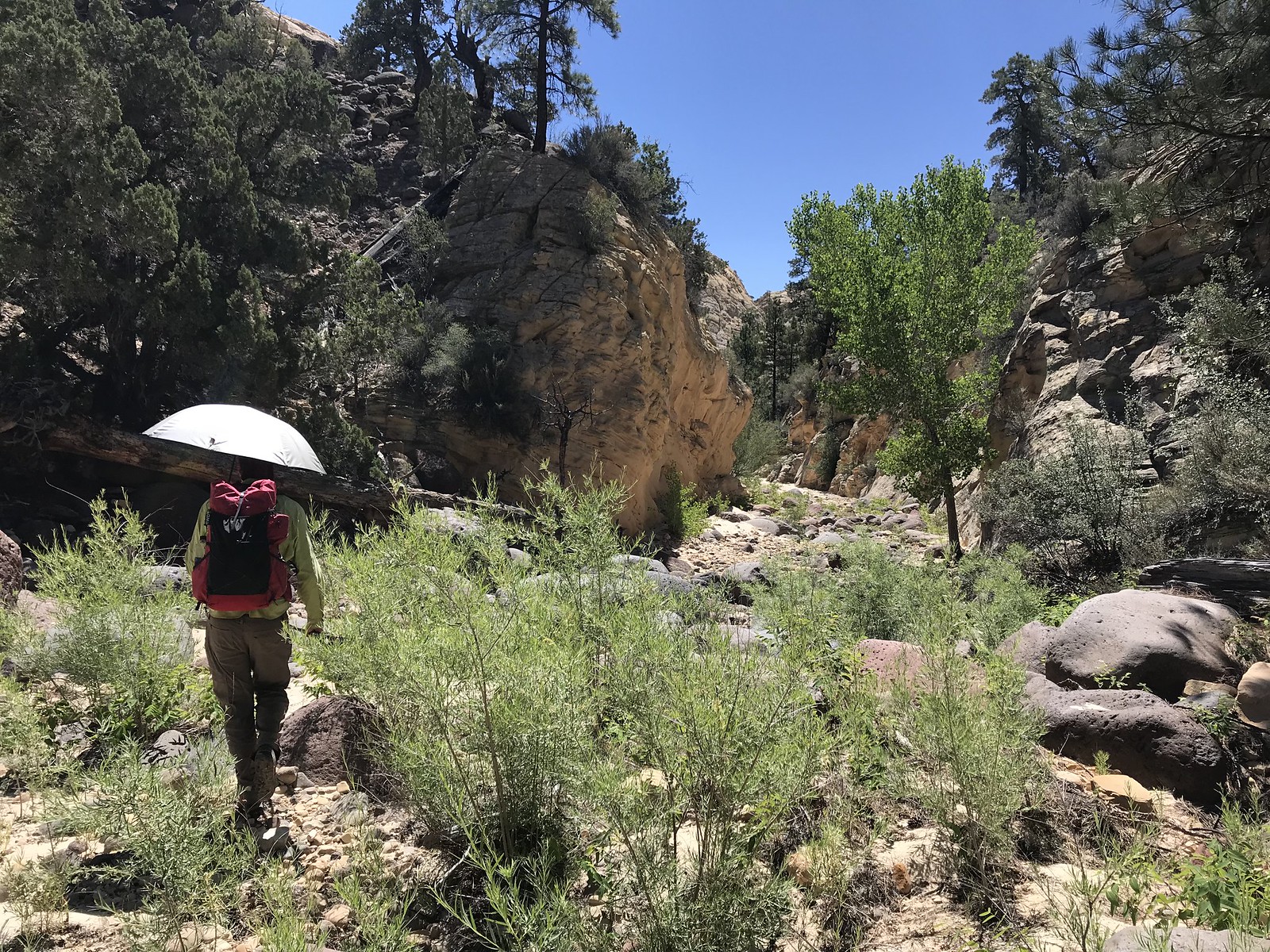 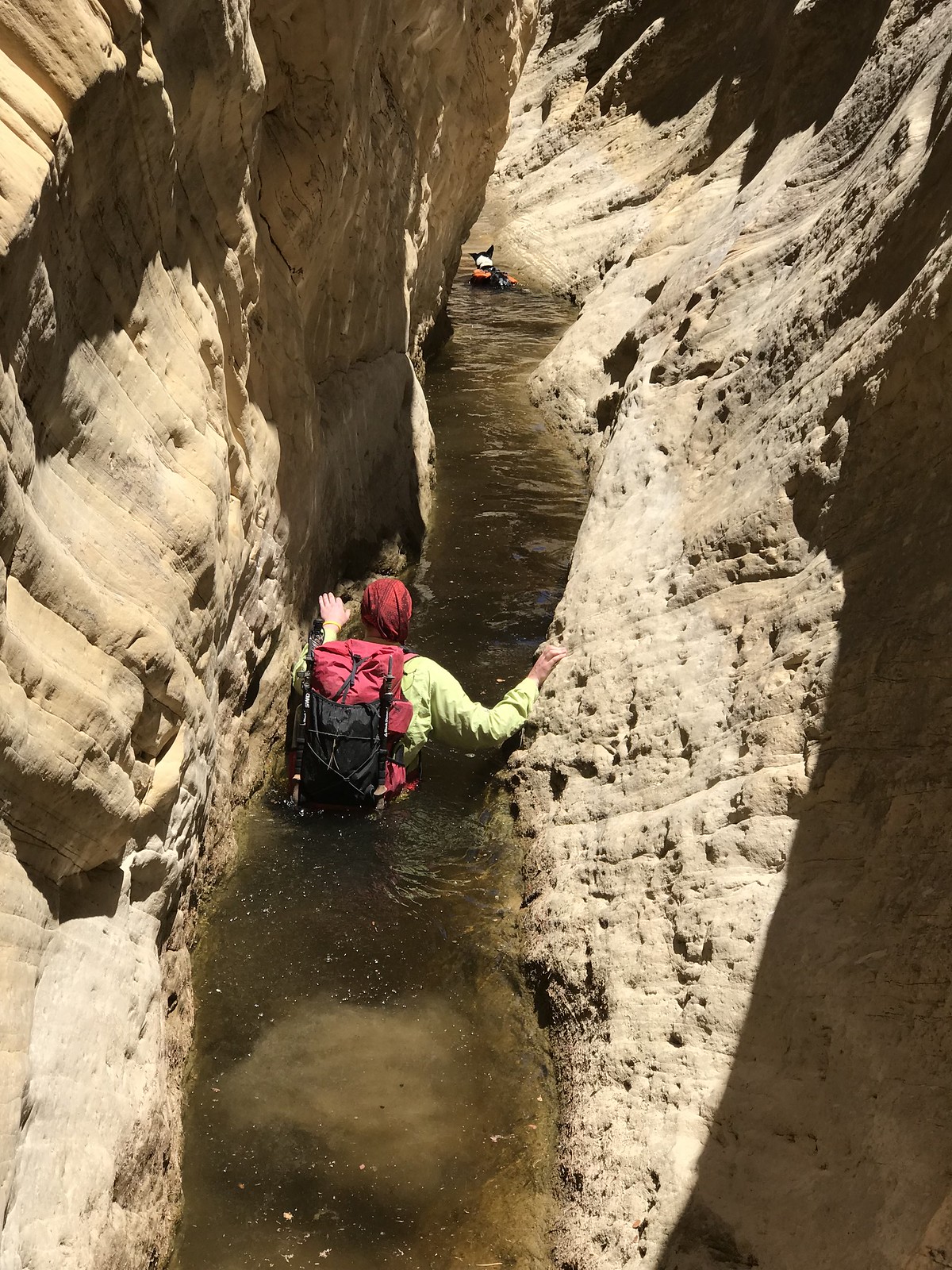 The best canyoneering is above the perennial water, while the scenery is the most striking further down. 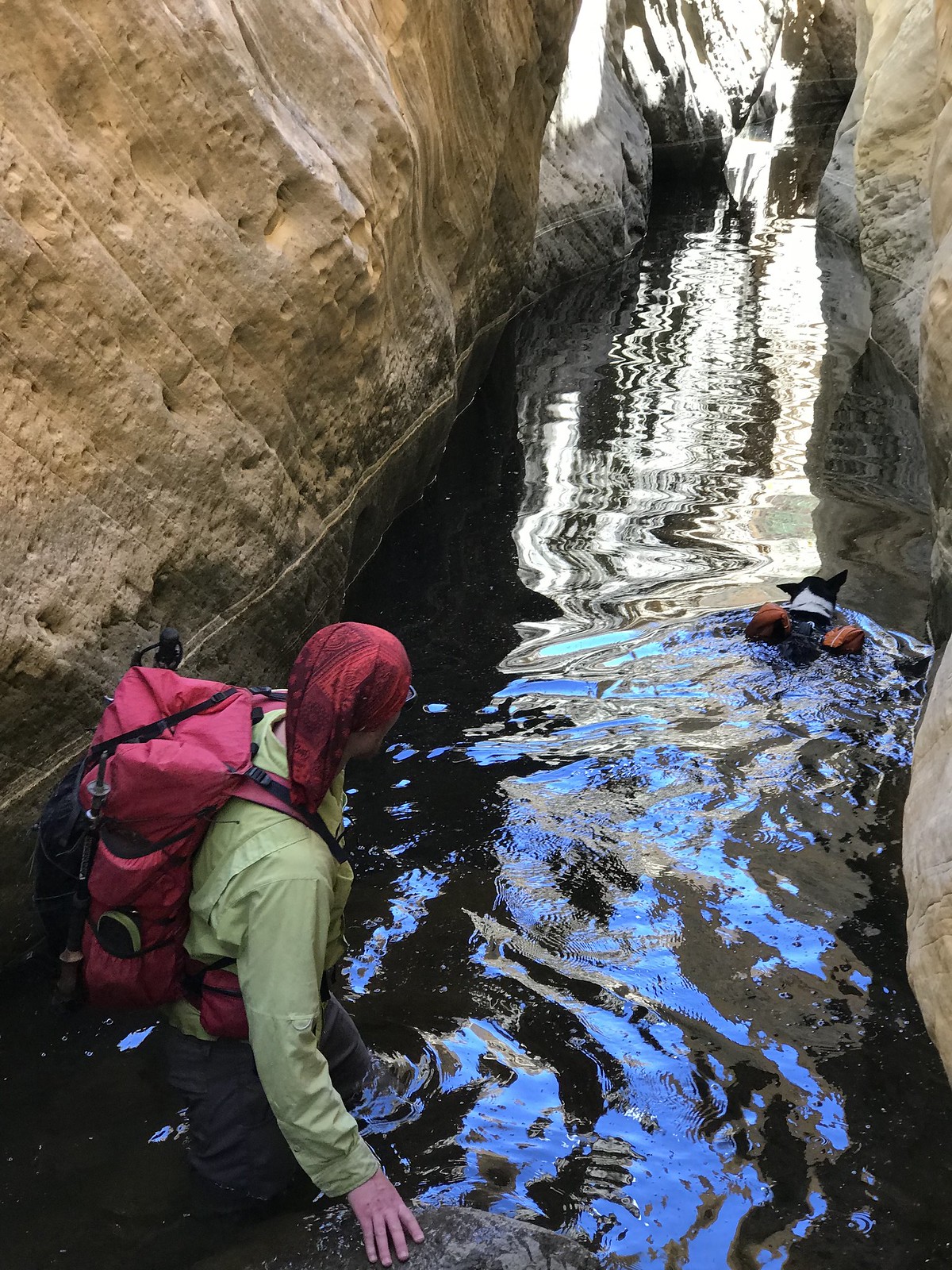 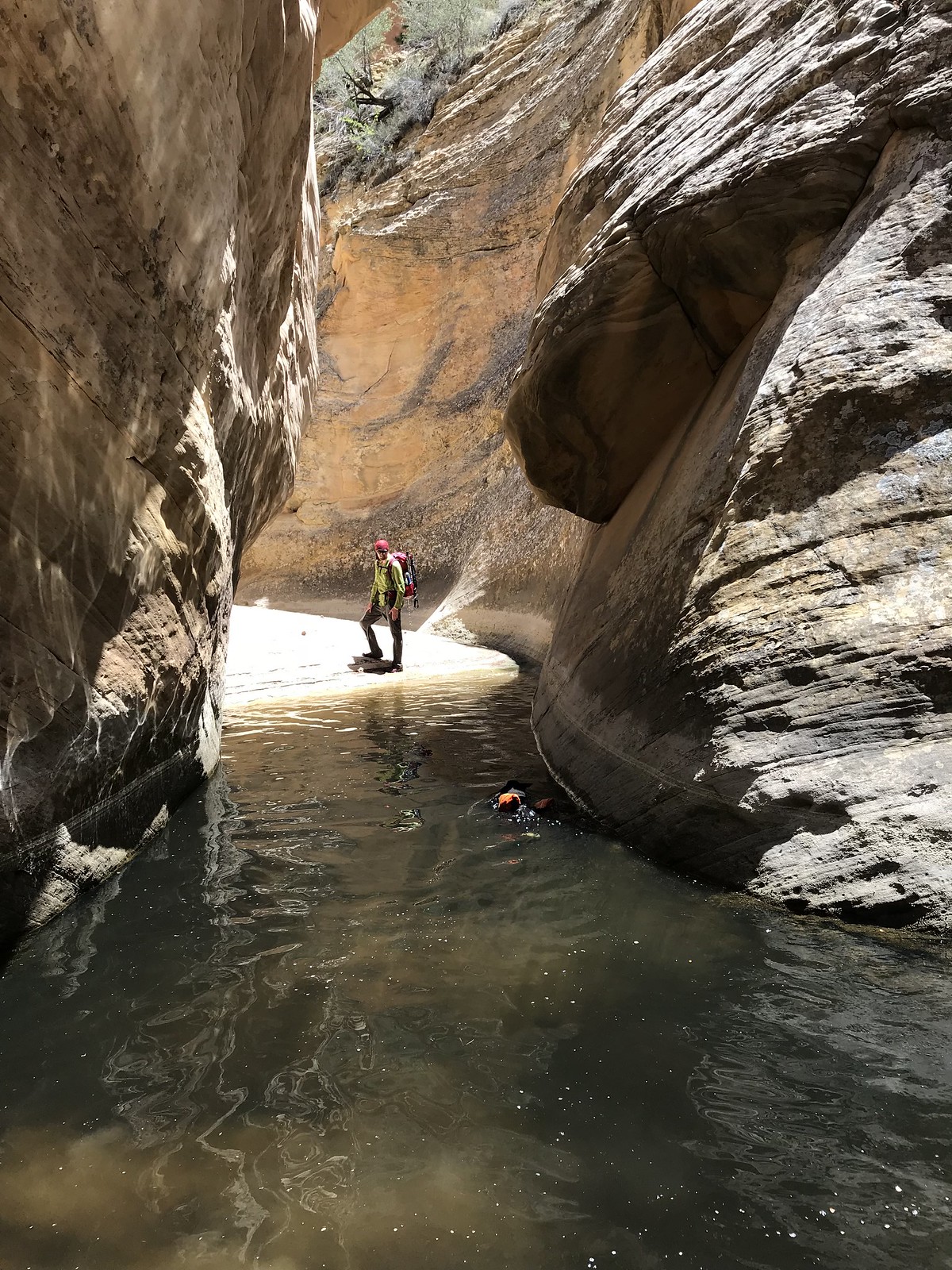 Still above the perennial flow. 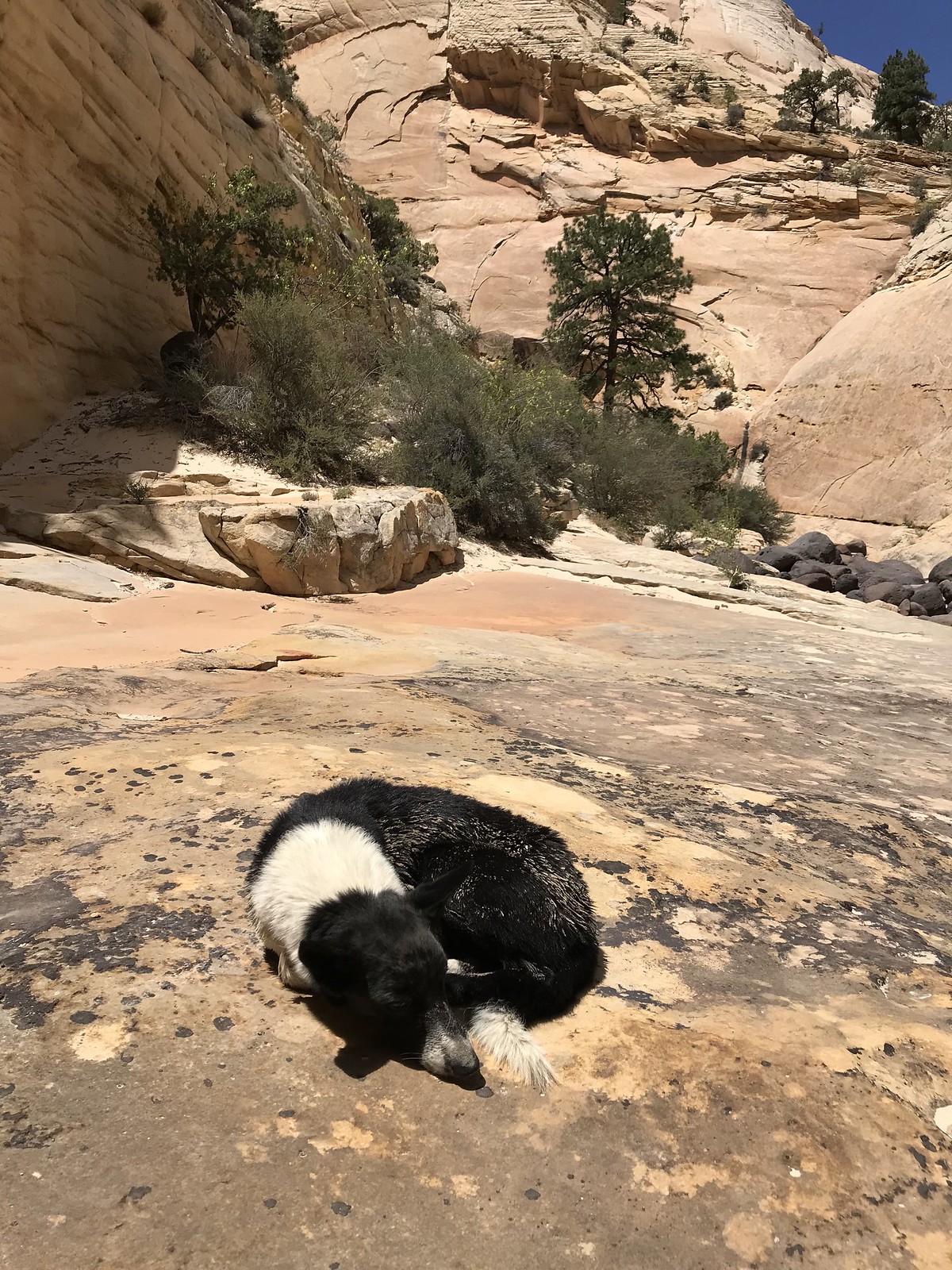 Warming up on a 100°F slab of slickrock. 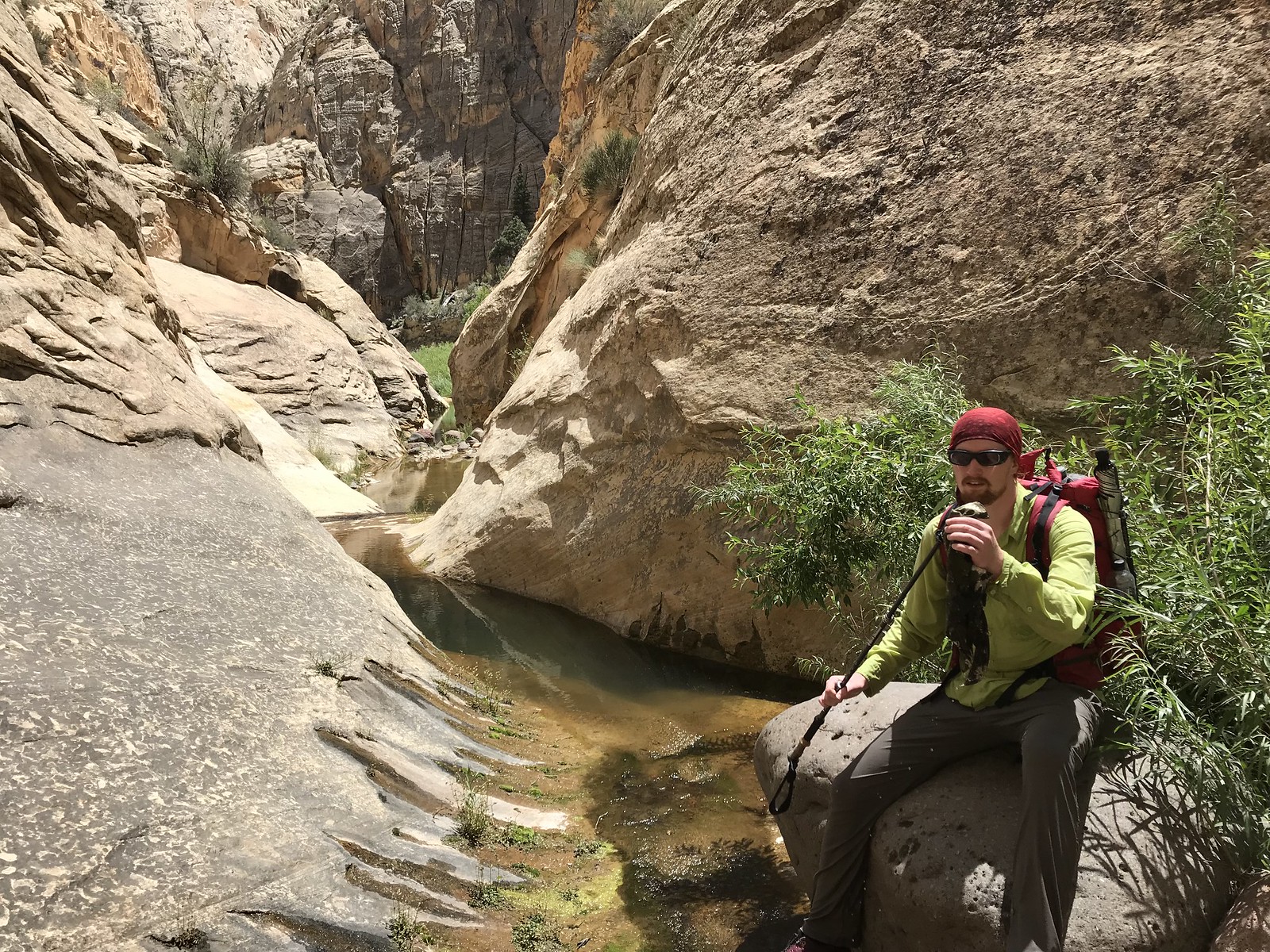 Once in the constant flow of water the swimming became so frequent that the cameras had to be put away!
Last edited: Jun 23, 2018

Nice account. You guys were a lot warmer than we did it and got hypothermic.
Art

That is a quick descent! One speed townie up the Hell's Backbone road?!? That does indeed sound painful. I've driven that road quite a bit, good thing a new chunk of it is paved for you.

Exciting!
Ugh my dog probably would have went straight to the "brown streak spring" and peed in it! Lol what a good doggie swimming with the pack!

We just hiked the lower section of Death Hollow from the Boulder Mail Trail. I'm really allergic to poison ivy but managed to get through with a lot of diligence and walking in the water. Now, of course I'm curious about the upper. How's the poison ivy in there besides the junction with the Mail Trail? Thanks!

cmgz said:
We just hiked the lower section of Death Hollow from the Boulder Mail Trail. I'm really allergic to poison ivy but managed to get through with a lot of diligence and walking in the water. Now, of course I'm curious about the upper. How's the poison ivy in there besides the junction with the Mail Trail? Thanks!
Click to expand...

Easily avoided once committed to swimming and wading. Dog did lots of onshore bushwhacking but didn't transmit any oils to us.

Group of 4 of us were going to do the entire stretch from Hell’s Backbone to Escalante Town in late April...without wetsuits.

Shortly before the trip, a couple of folks on BCP wisely talked us out of it (@Joey posted a video of cold swims from the prior May), and we switched plans at the last minute and did the lower from the airstrip to town. Got hit with an impressive late spring snow storm the day we were to descend into the hollow. One other group that we passed bailed, but we went ahead in the snow. It quickly turned warm, and we spent the next 2 days chilling in the Hollow/Escalante canyon and had the time of our lives.

After the trek, we drove up Hell’s Backbone to that same TH area just to check out what we missed. Hope to do the whole thing someday in better conditions. 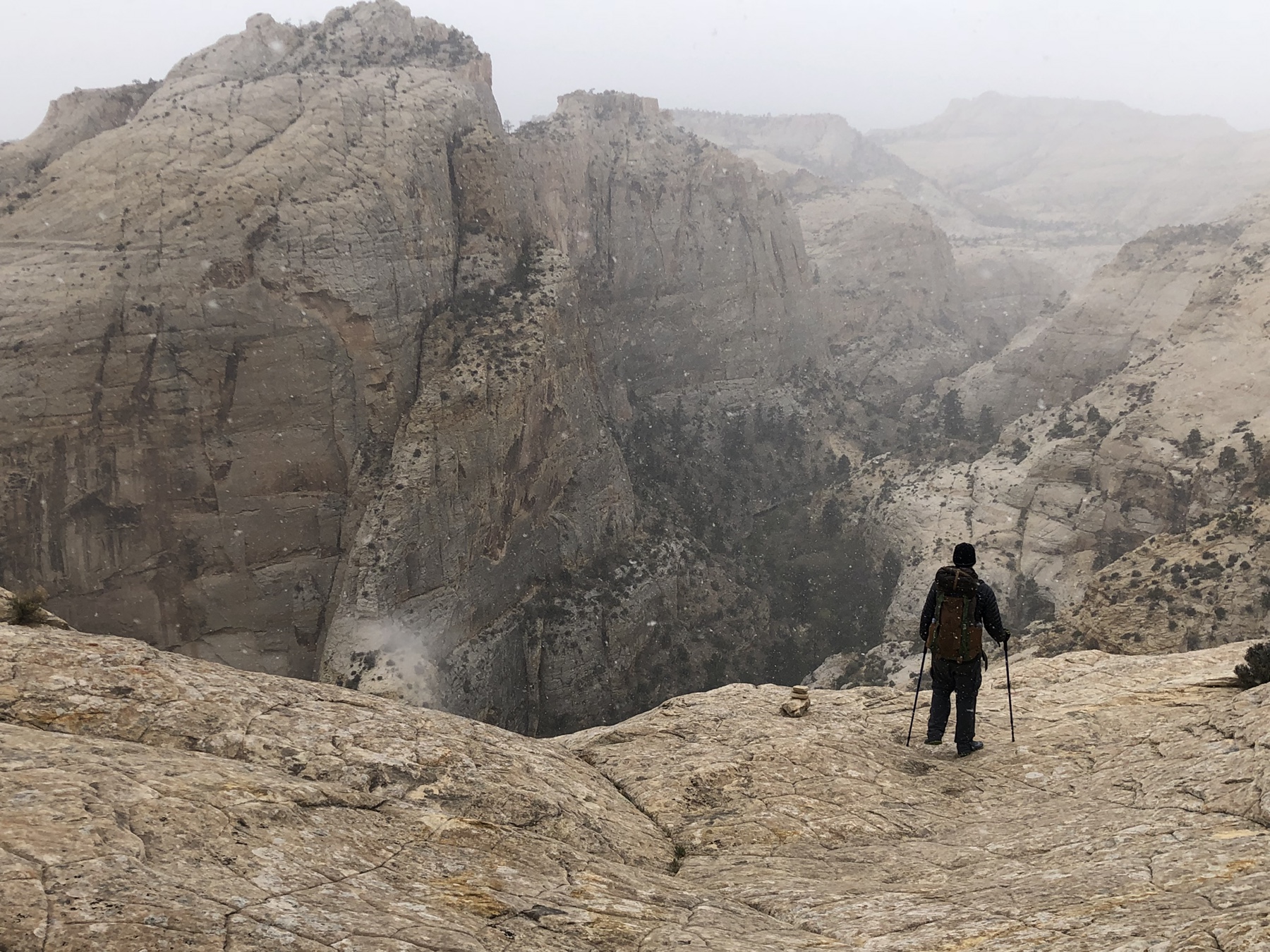 Descent into the Hollow in the snow
You must log in or register to reply here.
Similar threads