Last summer me and some friends went on a road trip that started in Utah and went up to Crater Lake National Park. From Crater Lake we worked our way down through Northern California to Lake Tahoe. The last stop was supposed to be Great Basin National Park, but by the time we got there all the campsites were full. So these next two trip reports will be in the reverse order of the trip.
We did spend two days in Lake Tahoe, but it wasn't very exciting. I know there is more around that area to do than just sit on the beach. Unfortunately while we were there, the people in my group just wanted to was sit on the beach so that's all we did there.
Before that we spent two days in Lassen Volcanic National Park. I didn't even know that it was a National Park until I found it on Google Maps. After we were done at Crater Lake we drove down into California to visit the Park. We camped at the Manzanita Lake Campground. The campground was packed with people. (The picture below was of our campsite). 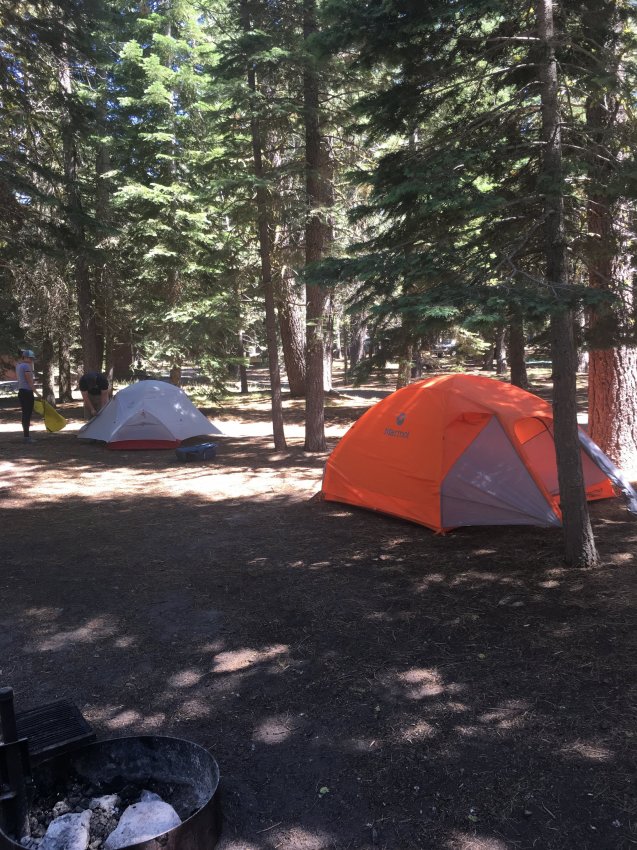 I thought for sure that with that many people all the trails would be full. That wasn't the case. We found that most of the trails were very empty. It seemed that most people that were there, were there for the little lake by the campground. Our first night there we walked around Manzanita Lake. 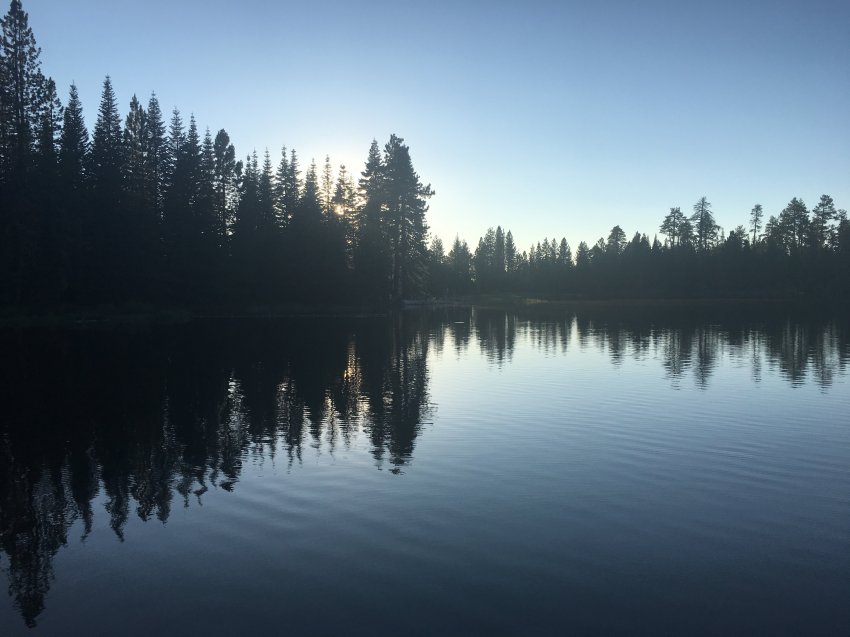 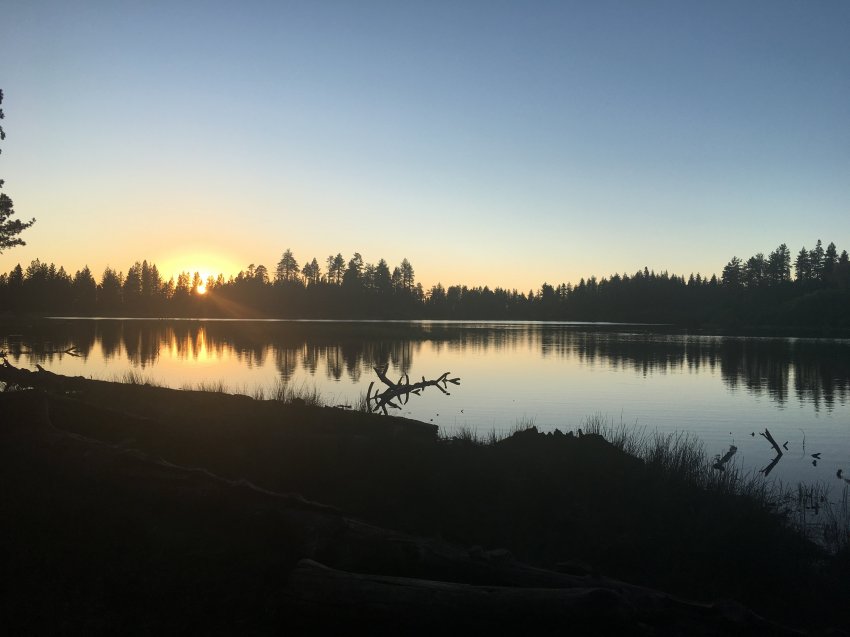 The next day was when we did most of hiking. The first hike we did the next day was to a little lake called Crags Lake. It was more like a pond, but it was still worth the hike. 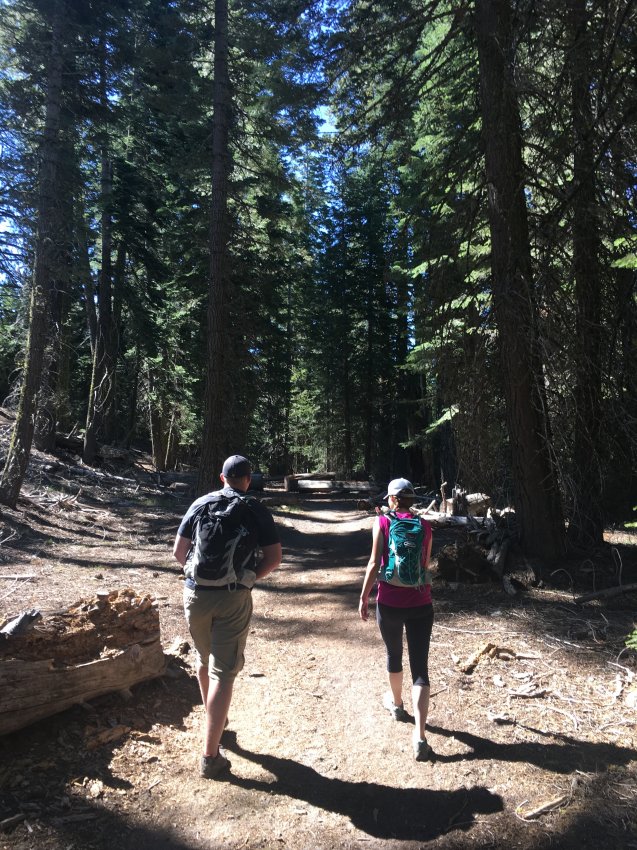 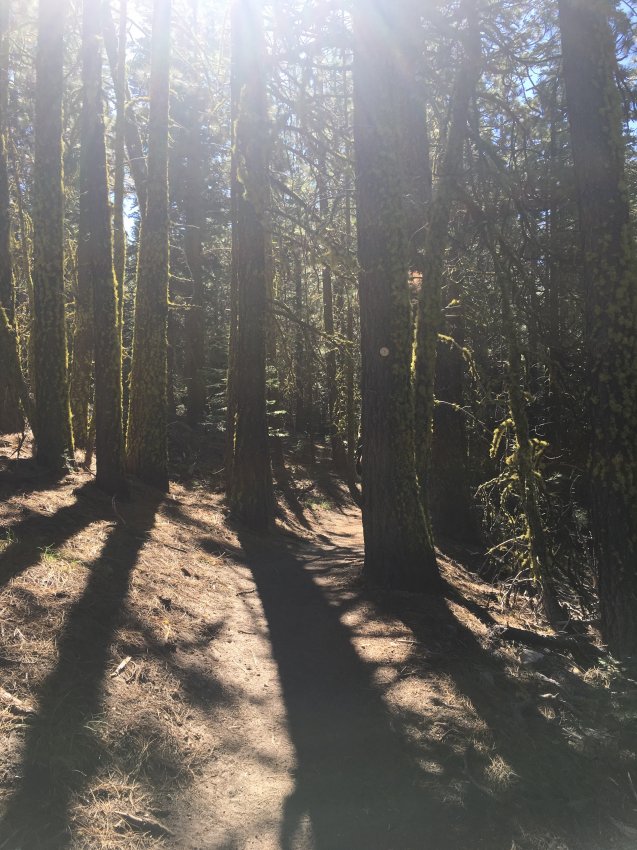 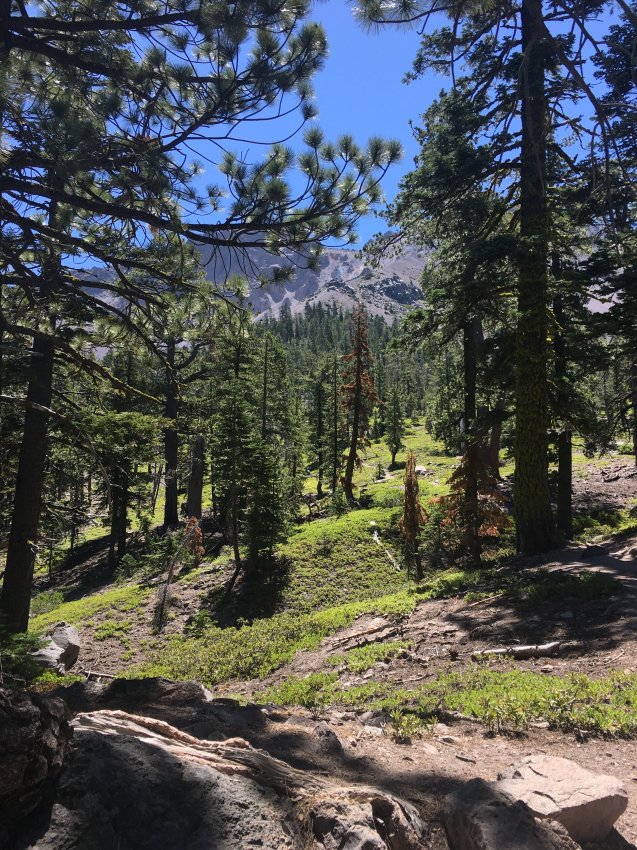 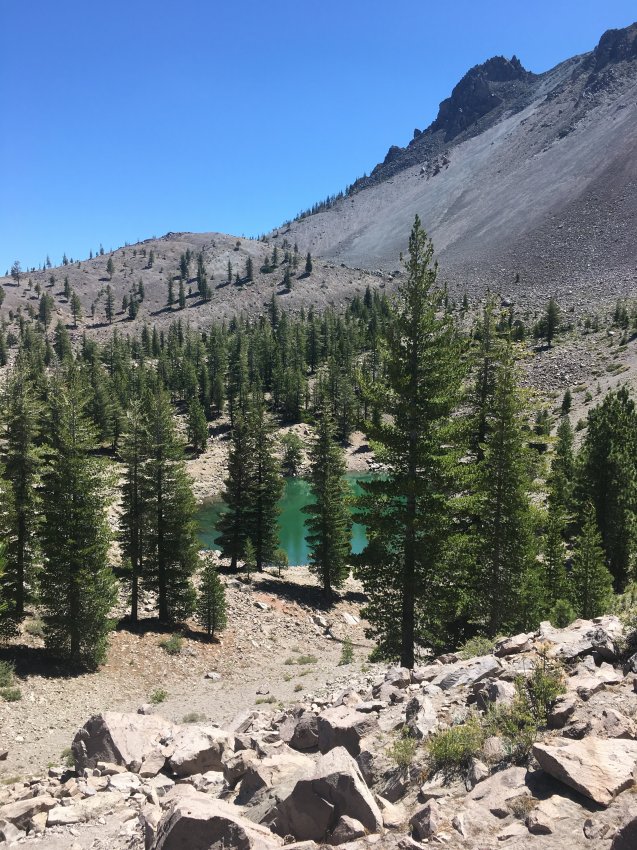 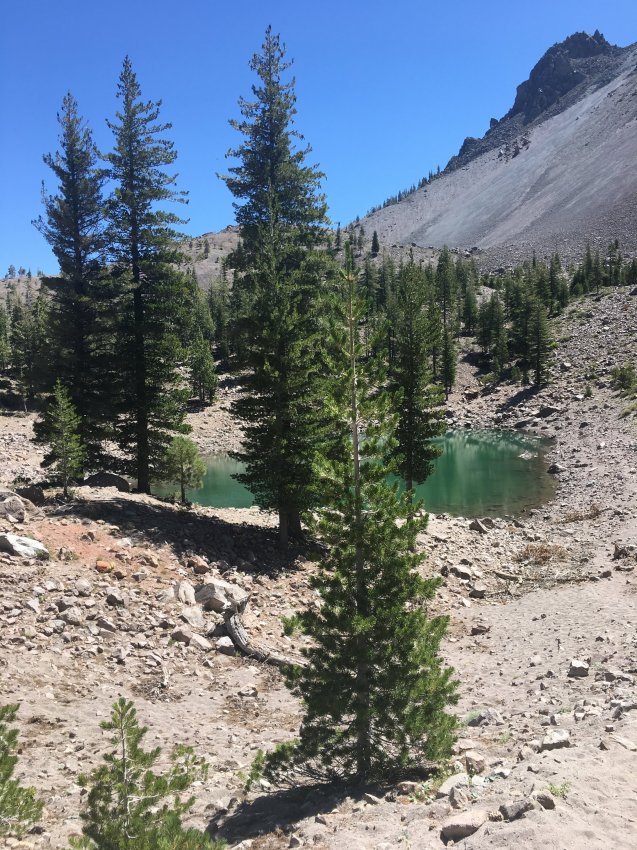 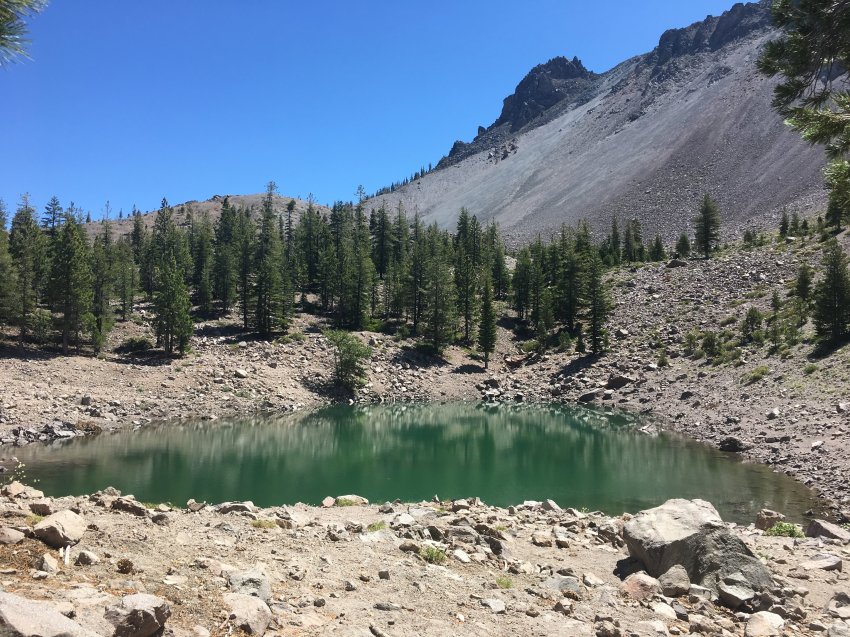 We didn't see any other hikers until we started hiking back. It was a nice place to relax and take some pictures. After Crags Lake we headed back to eat some lunch. Next we went for a quick hike around Summit Lake. 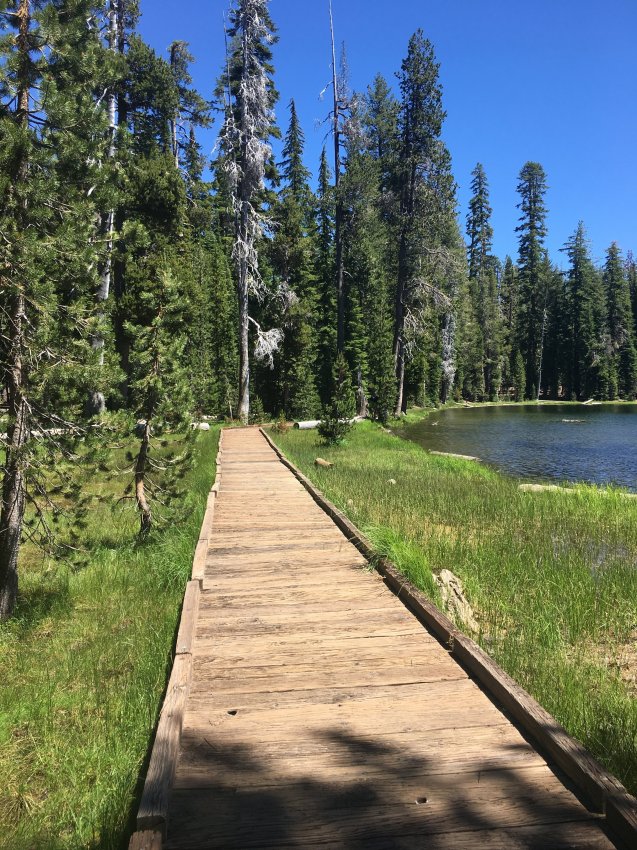 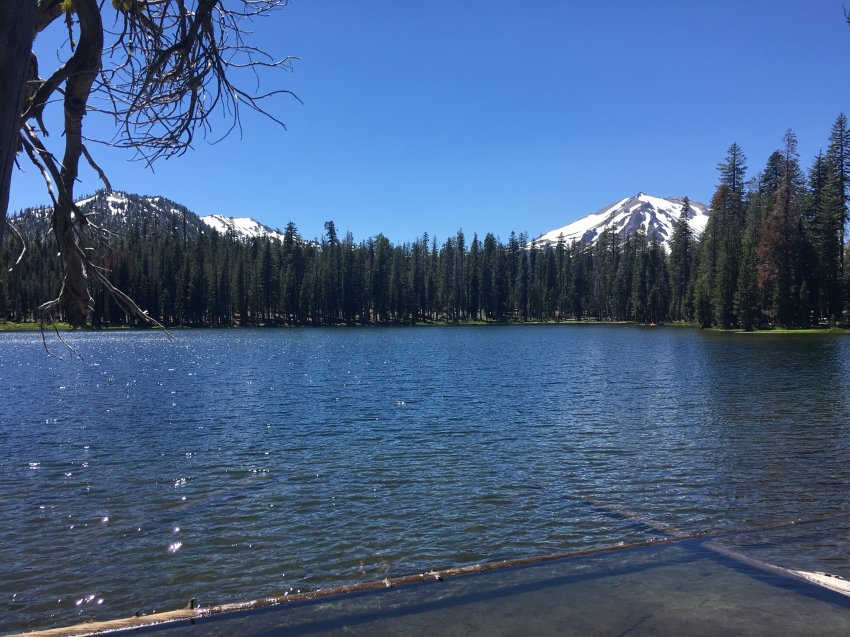 After Summit Lake we headed back to camp for the rest of the evening. While we were there most of the park was still closed because of snow. We went with the intention of hiking Lassen Peak, but it was still closed because of snow levels. They had the road gated off, so we weren't able to access the southern half of the park. Because of that we weren't able to get as much hiking in as we had planned. It was nice place to stop and check out though. Maybe one day I will be able to get back when more of the park is accessible.

I spent half a day at Lassen on the towards Tahoe. Only did a short hike to see the boiling mud pots at Bumpass Hell. Very cool, plan on checking it out on your next visit.

Thanks for showing me a little bit more of the park, it is a beautiful area that I would like to visit again
My trip reports: backpackandbeer.blogspot.com

Nice TR! Thanks for sharing.

Good stuff!
Do not pray for easy lives. Pray to be stronger men. - JFK
Orem Chiropractor

Beautiful! Thanks for sharing.

Why were Great Basin campgrounds full? There are like 4 of 5 of them and unless there is an astronomy program that weekend, it seems there shouldn't be very many people there. That's why it is so sweet to visit there.

Reef&Ruins said:
Why were Great Basin campgrounds full? There are like 4 of 5 of them and unless there is an astronomy program that weekend, it seems there shouldn't be very many people there. That's why it is so sweet to visit there.
Click to expand...

I guess they have gotten quite popular. I had read before hand that they normally fill up every night during the summer. They don't do reservations for most of the campgrounds. I hope they go to more reservation campsites soon. It's a long drive out there to not have a spot when you get there.

Thanks for the share!
I keep meaning to head to Lassen, since it is so close to me.
That sure is a beautiful "pond".

I think it was Summit Lake where I spent a couple of nights in August of 74 (looks familiar). Huge herd of deer ran through camp. Memory Lane! Keep'em coming!

Outdoors24 said:
I guess they have gotten quite popular. I had read before hand that they normally fill up every night during the summer. They don't do reservations for most of the campgrounds. I hope they go to more reservation campsites soon. It's a long drive out there to not have a spot when you get there.
Click to expand...

Same deal with Capitol Reef over recent years where their campground has now been full much more often than not, and they have now gone to reservations from March-November as of this year. Then again, they only have the one big campground in Fruita, not counting the more primitive campgrounds consisting of just a few sites up in the northern end above Cathedral Valley and along the east side. Hordes of other people will pull into other spots along highway 24 just outside the boundary, particularly the west side, and fill out all those areas too.
You must log in or register to reply here.
Similar threads