Trail work in the Sierra

I 'm back from a three day trip to Summit City Canyon with a trail work party. Spectacular weather and a group of really nice guys made this a real pleasure.

I began by leaving Napa at a little before 5 a.m. to get to the trailhead in time to meet the group, At about 9:30 the first team hit the trail, while others stayed behind to load up the mules with the heavy lifting: tools for the trail. My little group of three split up at the Horse Creek Trail junction, when Greg headed back over the ridge to take care of his ailing wife. Dave and I continued down for another mile or so and set up camp. By the time we had the tents up, the pack team arrived, and everyone else got there soon after to join us for lunch. 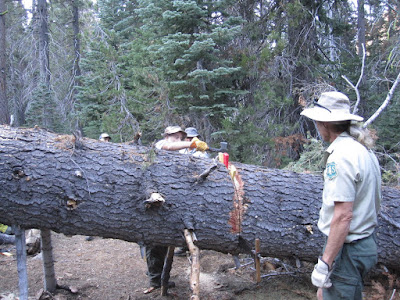 By 1:30 we were at the first major obstacle of the trail: a massive tree that blocked things from the far side of the river to the granite cliffs on the other side of the trail. And since the only way to get past it was to get on your hands and knees and crawl under it, this one had to go. Ranger Chip had been there some weeks before, but had been unable to cut through the monster. In fact, he'd had to leave two wedges stuck in place in the saw cut. The damn tree was still alive, with some of its roots drawing water from the creek, and the wood expanded around every cut and wedge.

So we set to work. The buck saw would bind up completely after a few strokes, despite the wedges we were pounding into the cut. We cut from below, then we started another cut on the other end to reduce the tension, and final hacked out the wedges and Chip and I began a second cut parallel to the first one, whacking out the material between the two cuts with a small saw and a hatchet. Bear in mind that all of this was done with hand tools, as any engine is prohibited in the Wilderness Area! After a couple of hours, we began to make progress, and finally cut through the first cut. 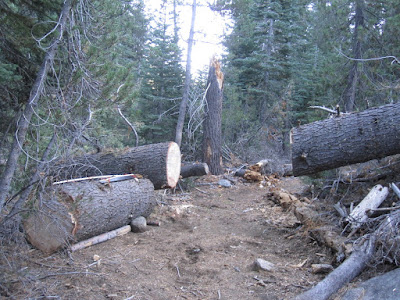 Now we started on the second cut, with Tom and Dave pulling much of the work. But now we were able to use the wedges with some effect, and about 4 p.m. we finally cut through on the second side. The middle section was now held up by the branches we had propped under it, and with a few whacks we dropped it to the ground.

With much heaving and hollering, we slowly inched it up onto a smaller branch, rotated it, and rolled it off to the side of the trail. After that, it was back to camp for a well-deserved rest and dinner. 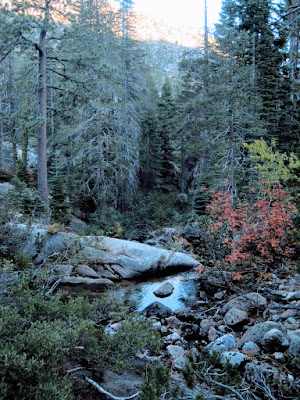 It was a beautiful evening, with fall colors all around, but after dark the temperature dropped quicker than that big log, and we were in bed soon after.

The next day we left our camp and headed down the trail for more fun. This time it was a large aspen that had fallen almost directly on the trail. And while the tree was smaller, it was lower to the ground and still green. Tom, Dave and I sawed away on it for more than an hour before we finally cut it through on both ends, and then maneuvered it off the trail. Chip had gone farther down the trail to scout out our next project: a maze of trail braids through the jungle of ferns above the first crossing. He arrived just in time to see us polish off the aspen. 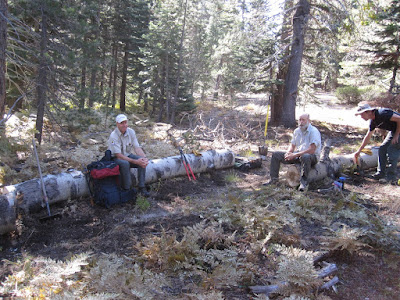 From there is was a short walk down to the ferns, where the trail had become quite confused due to a large tree blocking the route. We used a Macleod, a shovel, some loppers and lots of hard work to mark the best trail through, and then lined it with larger branches to make sure it was easy to see. By the time we had done this in two different sections of the trail, it was lunch time.

Meanwhile, Mark and Greg got off to a late start, but hiked past us to head down to the second crossing to get to work down closer to the Mokelumne River.

After lunch our team hiked down to within a mile of the second crossing, hitting the trail with the Macleod from time to time, lopping off a few branches, kicking bigger logs out of the trail, and occasionally restacking a cairn for better visibility.
We stopped at a glorious granite plateau by the creek, refilled out water bottles, and started to hike uphill back to camp. On the way back Tom, who had never been down the canyon before, led the way so that we could get a fresh pair of eyes on the trail. We found a few places where it wasn't clear, and did what we could to mark it better. 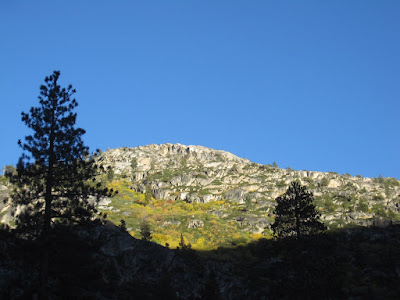 Chip raced down to chat with Mark and Greg below, and then joined us in camp for the second night's dinner. It was another stunning evening in the wilderness.

On day three Tom and Chip were going to hike down and join Mark and Greg, while Dave and I hiked out. But we weren't done with our work detail. We took the post hole digger along for the ride, so that we could dig new holes for two of the posts that Chip was having brought in by mule that day. 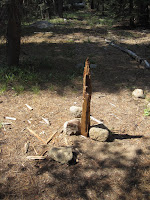 The first one, at the junction of the Horse Creek Trail, was a cakewalk. Dave wiggled it a bit and pulled the old pole neatly out of the perfectly preserved post hole. It took all of thirty seconds, and we were a bit gleeful about that. 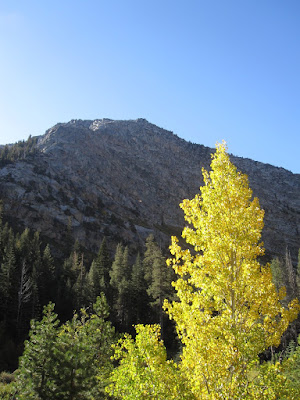 But the second post hole, at the junction with the Fourth of July Lake Trail, was not so much fun. It had broken off right at the ground, and as we dug a new hole we discovered that the old hole had been packed with rocks to hold the post tight. They worked, and so did we, digging it out one rock at a time. But after twenty minutes of combined sweat, David and I declared the second post hole dug, and left the tool beside the trail for the mules to collect. Our work was done.

We hiked out and made the trailhead by noon, and I managed to get back to Napa through the stunning aspen trees around Carson Pass by 4 p.m. As I drove into town I noticed a fire burning in the grasslands by the airport south of town. Later that night, Napa would be surrounded by fires on three sides, with blustery winds blowing them quickly across the landscape. Our own home only suffered a light coating of falling ash, but our more rural neighbors found themselves in dire straights. We can only hope the easing of the winds will make controlling the fires possible today.
Č
Check our our website: http://www.backpackthesierra.com/
Or just read a good mystery novel set in the Sierra; https://www.amazon.com/Danger-Falling-Rocks-Paul-Wagner/dp/0984884963
You must log in or register to reply here.
Similar threads