Greetings again, as the adventure stalls out in the snow. 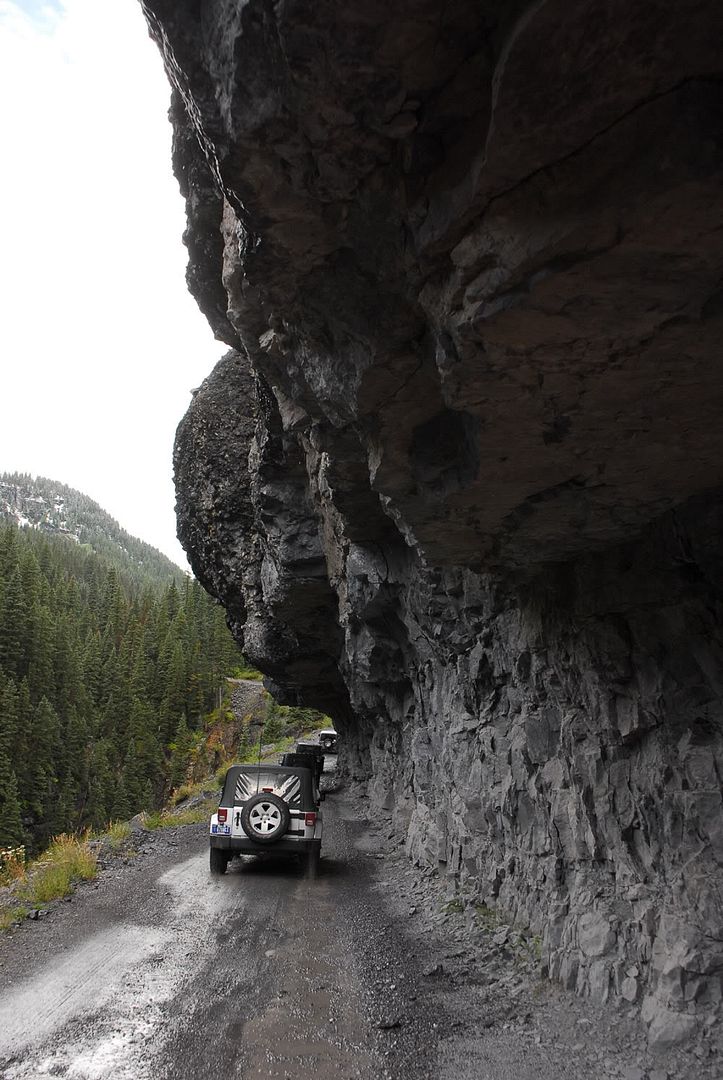 The plan for our second day at the Ouray Jeep Jamboree was to head up into Yankee Boy Basin and Governor Basin. This rocky overhang is on the easy section of the road leading out of Ouray. 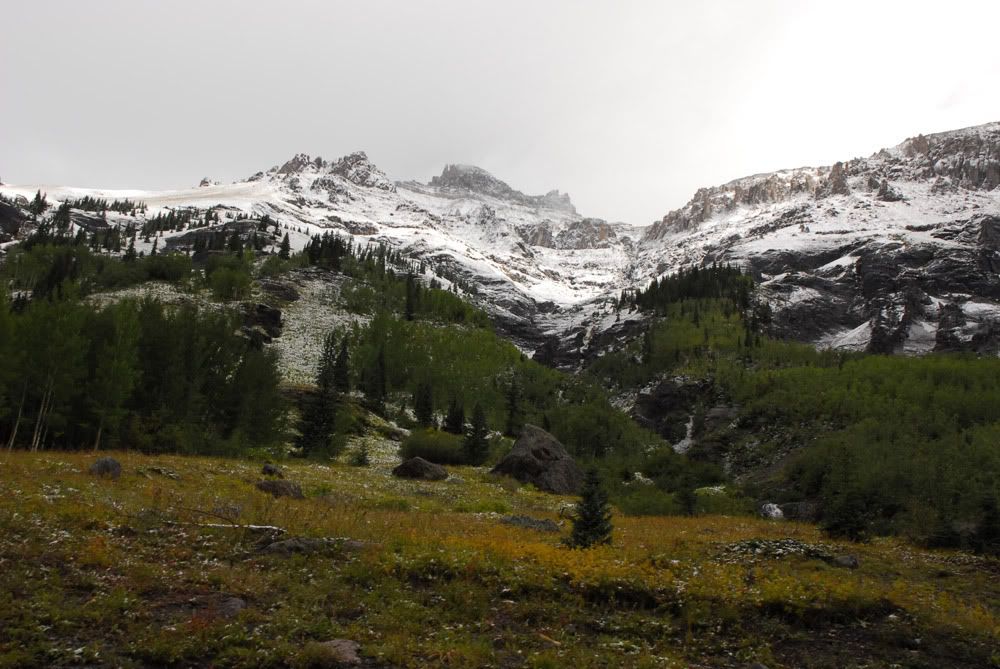 Quite a storm had blown through Ouray the night before, knocking the power out for about four hours (when the power came back on, it toasted the DishTV box in our condo unit...we awoke to the smell of burned-out electronics.) The storm also dumped snow in the higher elevations. This would prove to be a problem. 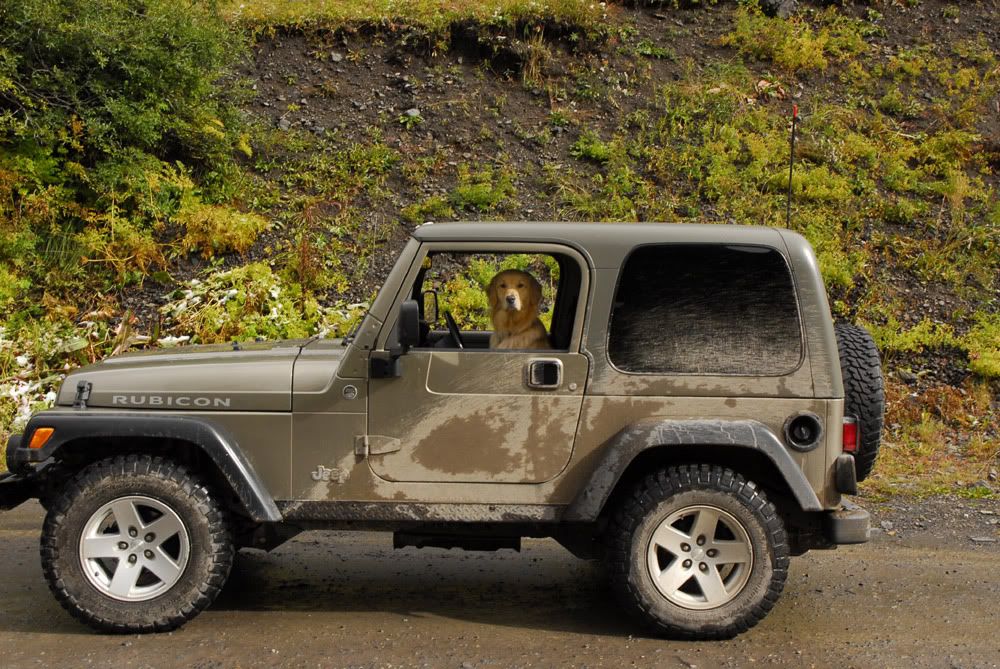 "Hey doggie, what kind of trail conditions can we expect up there?"..."Ruff!" 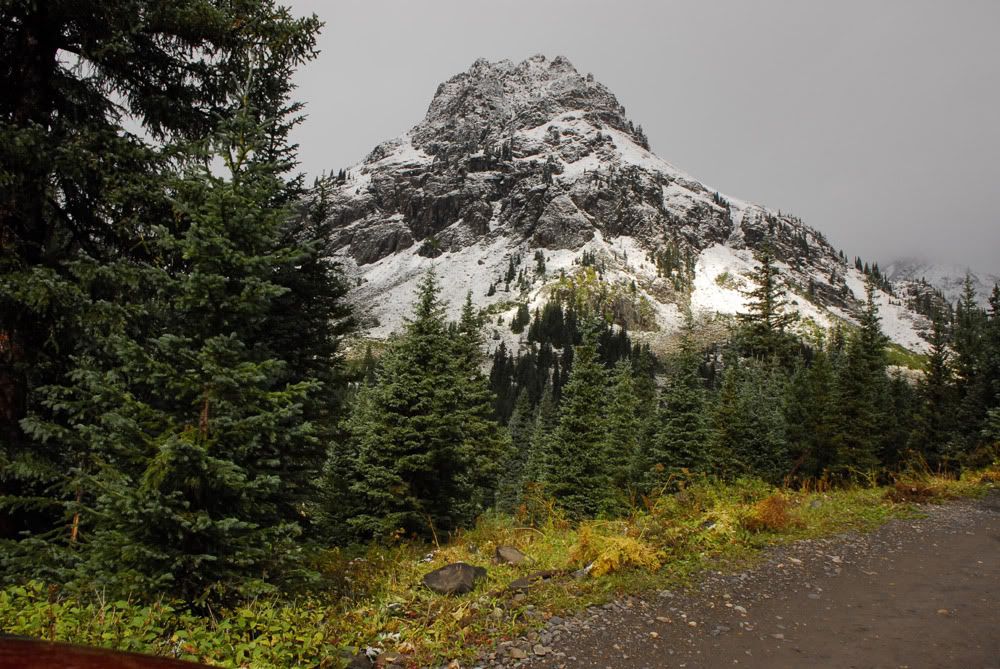 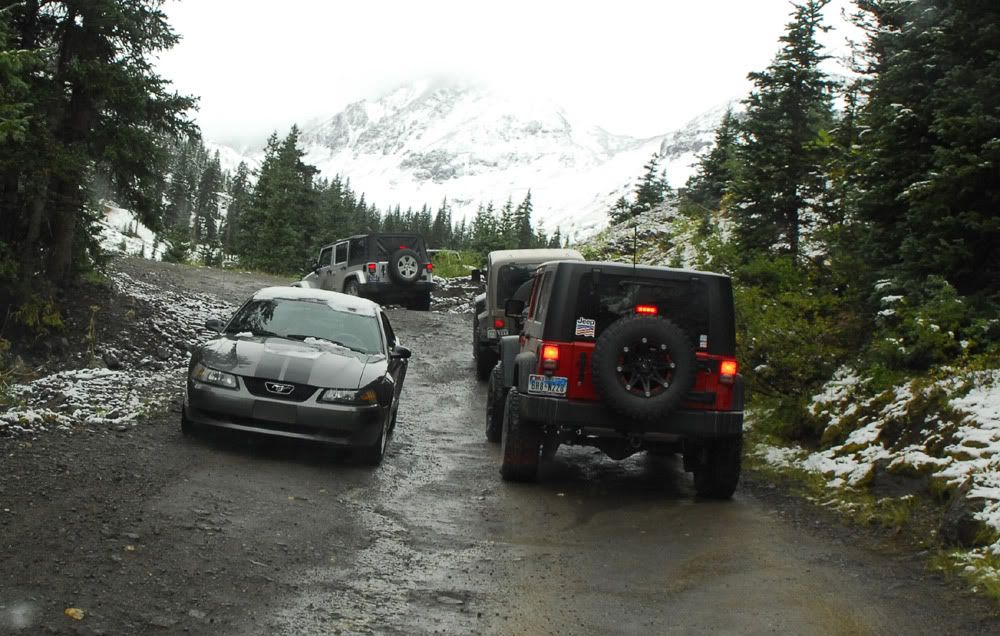 As we headed for the actual trailhead, we passed this guy in his Mustang. Granted, the road wasnt that bad, but I don't know if I'd take a Mustang up there. 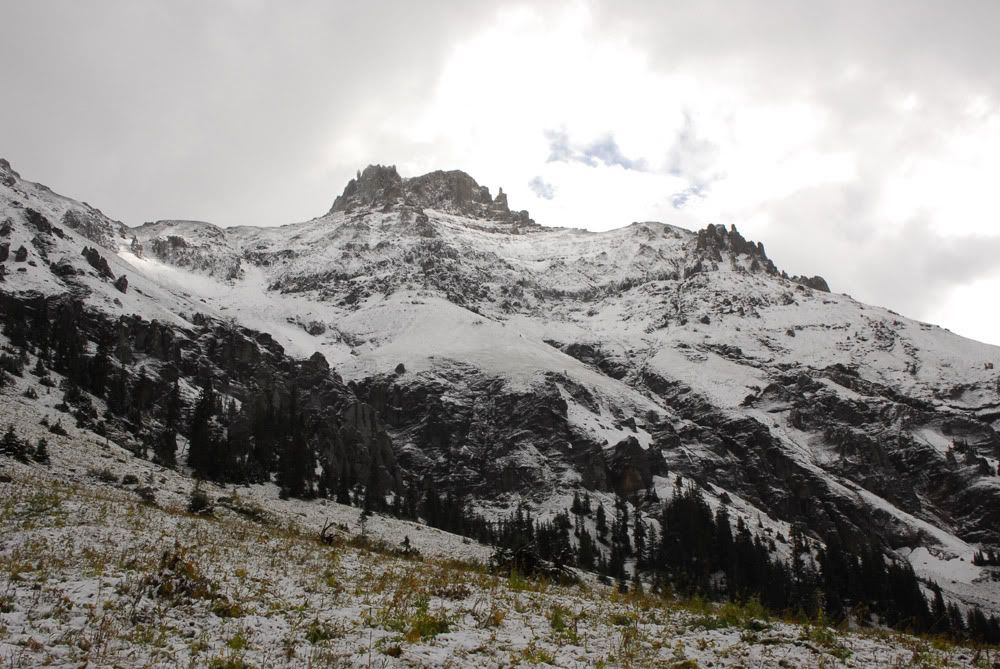 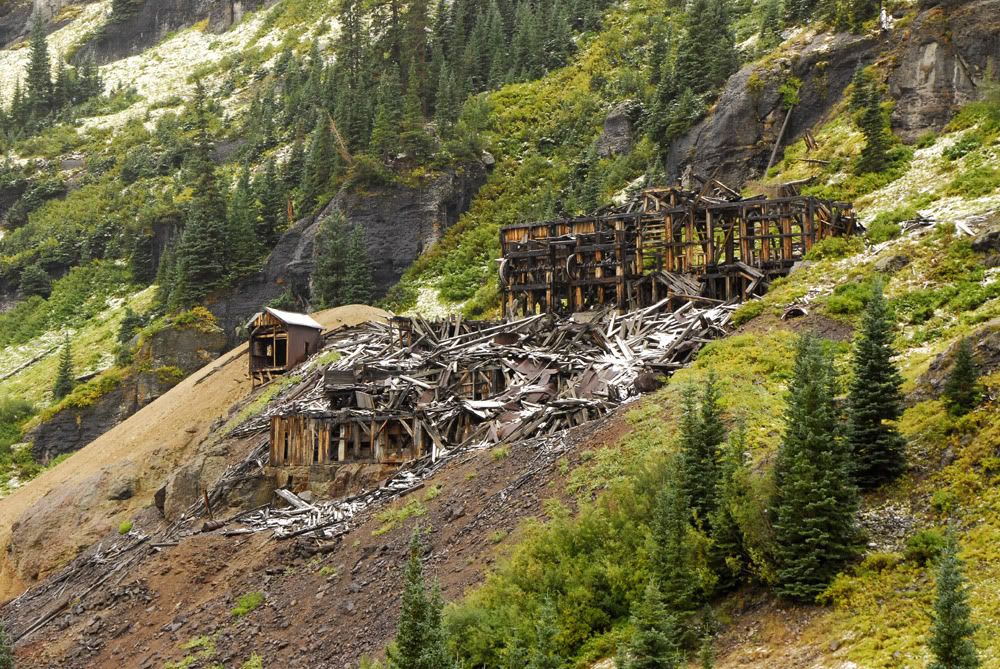 Remains of a mill near the Virginus Mine. 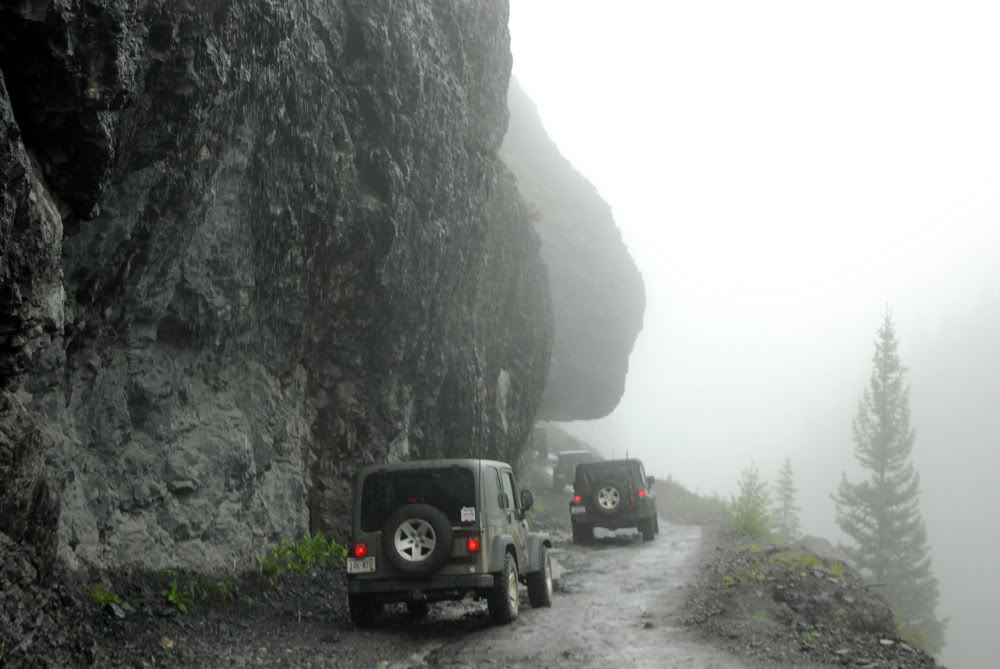 We made it to the trailhead, which had about 3" of snow covering the ground. The TL determined that it wouldnt be a good idea to press on. We had already heard on the radio that two Ouray County sheriffs deputies were assisting somebody who had trouble on the road up to Governor Basin (pickup slid off the snowy trail, driver injured enough that they sent an ambulance up to take him out...no idea how far the ambulance made it.) We turned around and headed off towards Silverton. 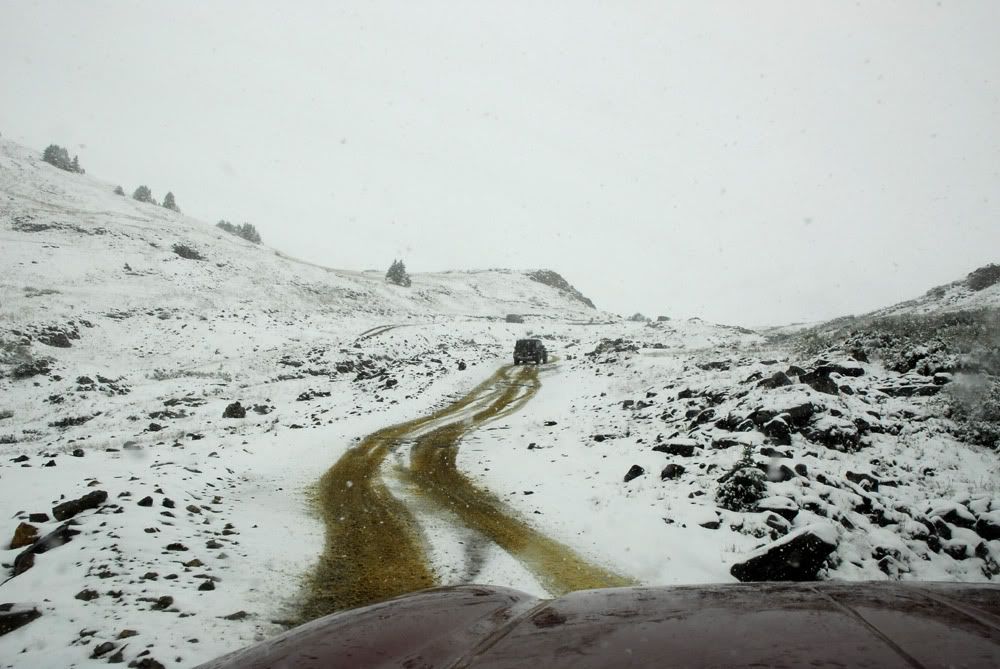 We were headed for our secondary target, the ex-Lake Emma. Conditions were not much better.
Lake Emma is interesting in that it was inadvertently drained in the '70s by a mine shaft bored beneath the lake. 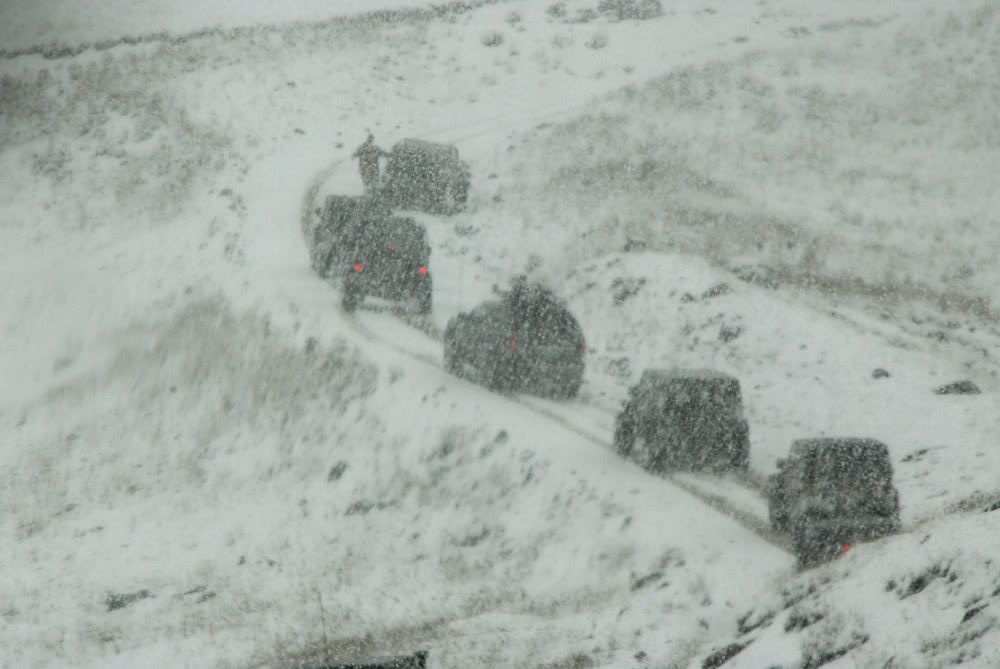 When the vehicle behind the TL slipped off the road, it was decided to abandon any thought of reaching the end of the trail. Where the road was wide enough, we all turned around and headed back towards Silverton. 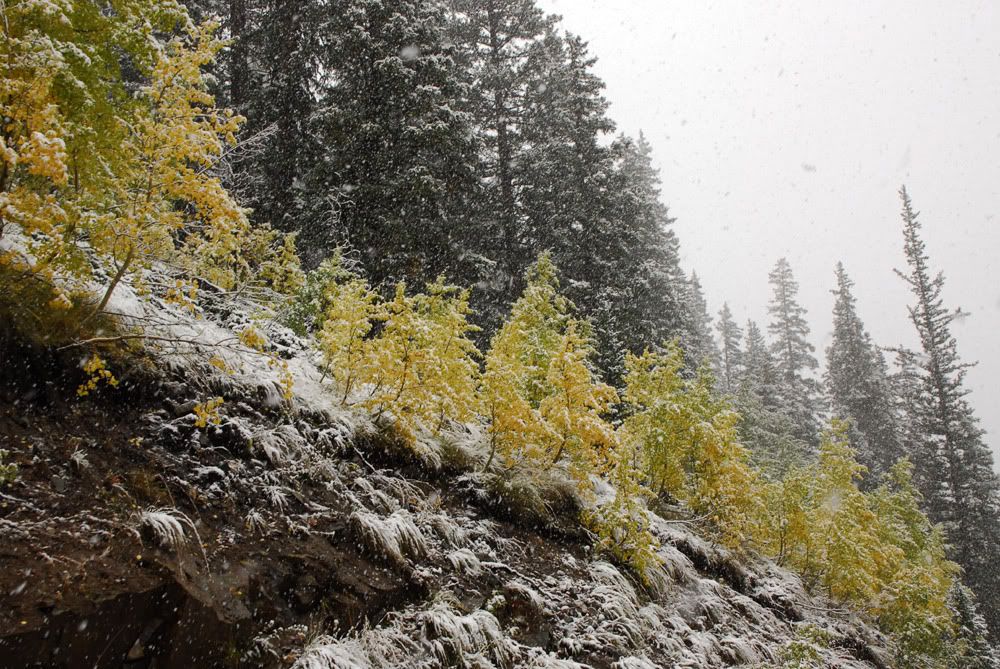 These were about the only aspen trees that we saw that had changed color. The change occurred late this year. Two years ago the trees were screaming yellow during the Jamboree. 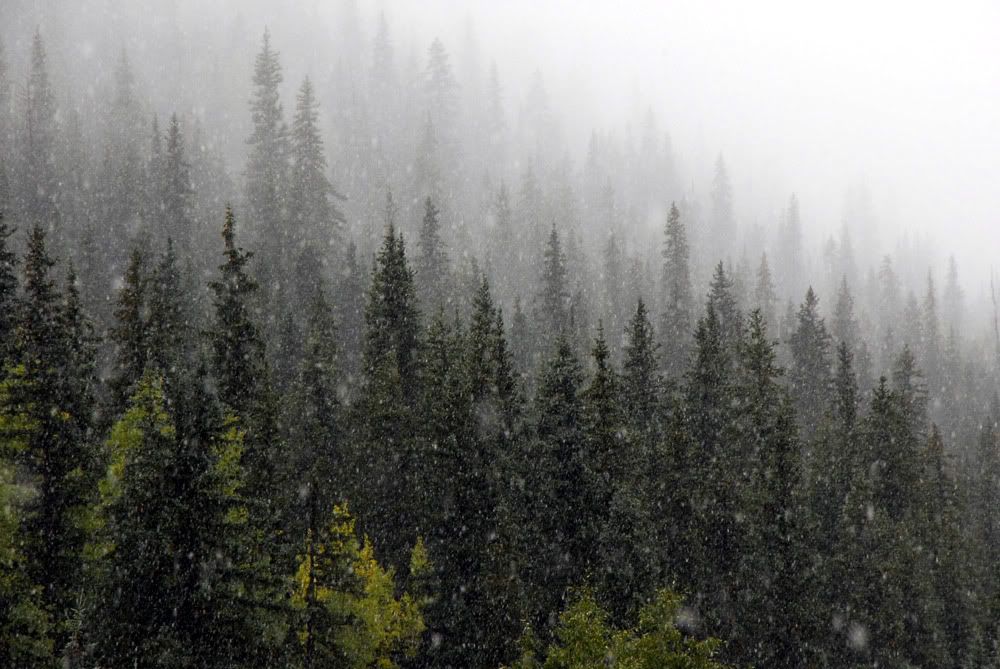 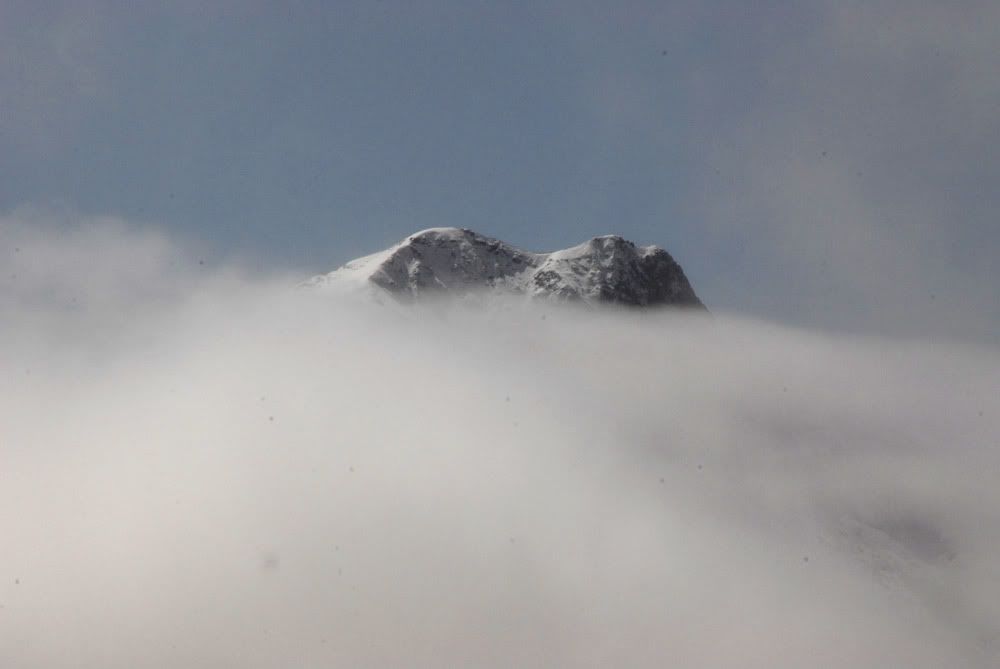 As we headed for Silverton, the top of this mountain peeked out from above the clouds. 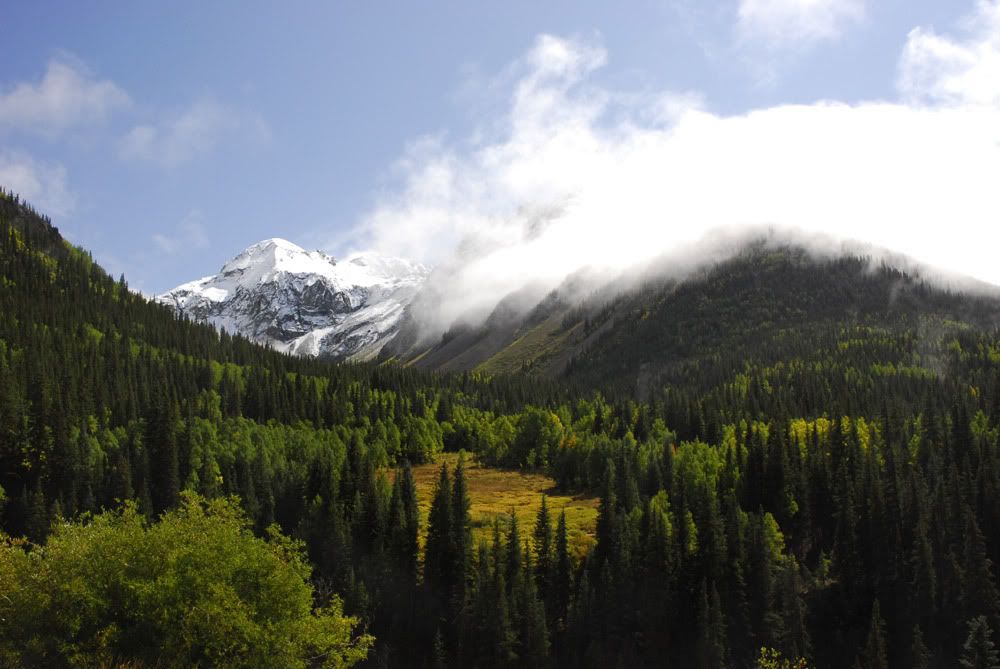 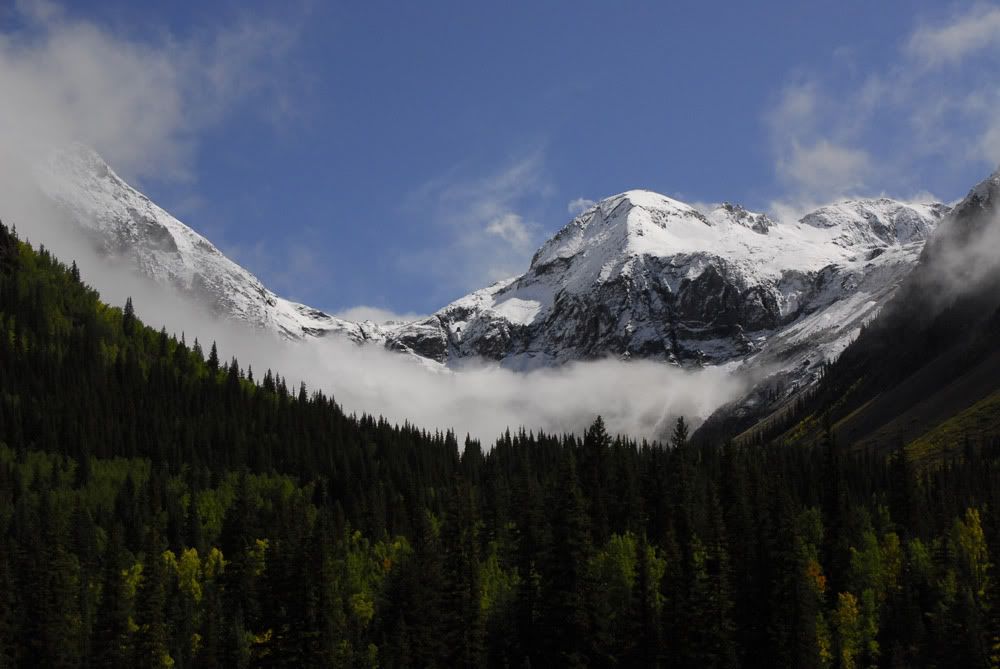 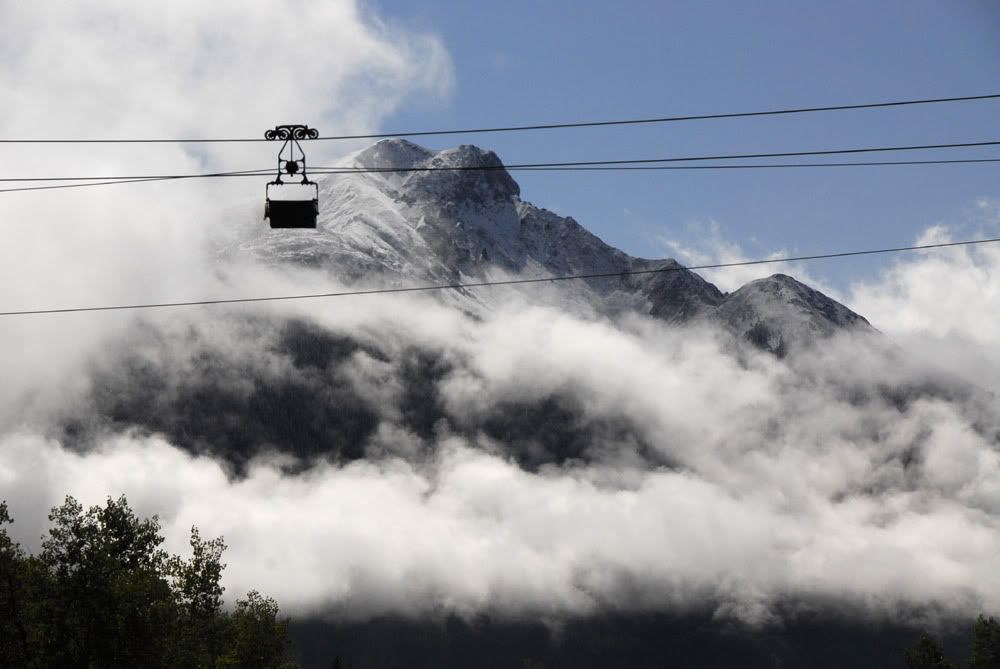 An abandoned ore tram over the road. 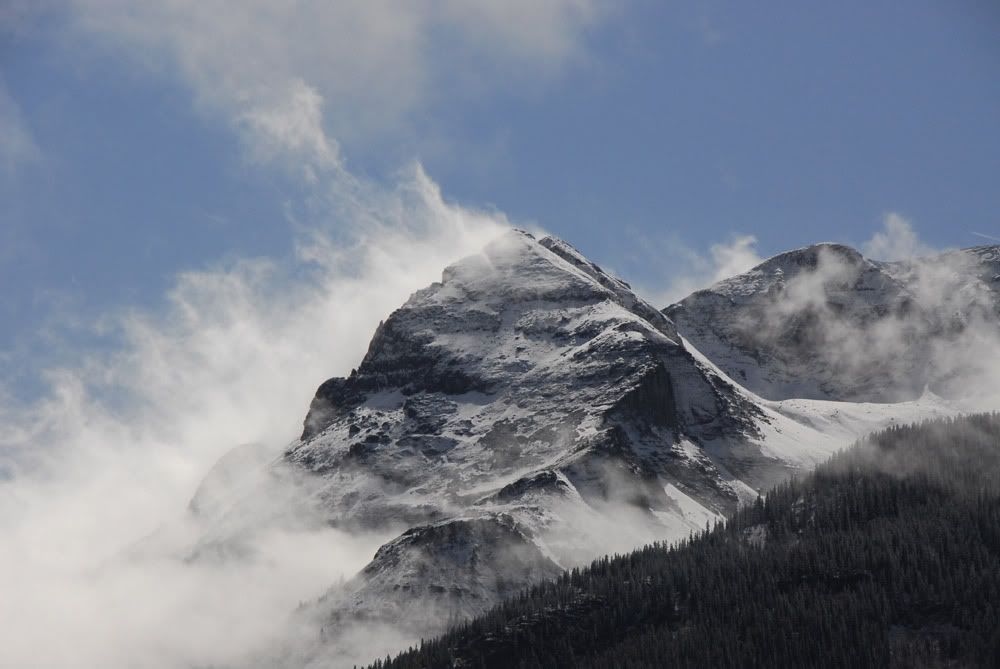 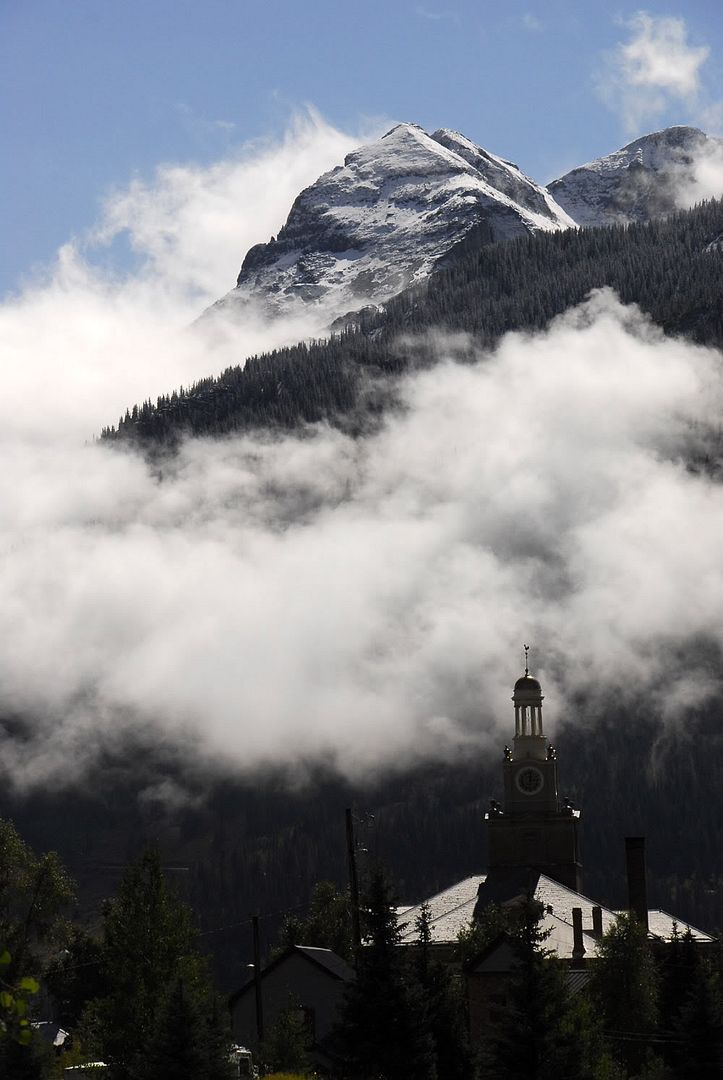 A final view of Silverton, with the county courthouse in the foreground. We did some last minute shopping in town, then headed back to Ouray for dinner. We werent the only group to be thwarted...Imogene Pass was closed, and the group that headed up Poughkeepsie had to turn around at the wall. One of the TLs gave his group an option of looking for some other road not snowed in, or head back to Ouray, where he'd buy the first round at the brewery.

We had a long way to get home, and only two days to do it. The Jamboree ended with a prize drawing (a JJ pass for two, a set of Goodyear tires, gift certificates, etc...we won nothing) and final goodbyes. We gave Sally a hug and received praise from Chris for our Liberteering skills. Then we loaded the Libby back to its proverbial gills and headed north towards Rifle, Colorado, on I-70. We made it to the east side of Des Moines on Sunday, and pulled into our own driveway at 6pm Monday.

We kept track of gas purchases along the way with an Android app called aCar. It came up with the following stats:
Total spent on gas...$1196.79
Average MPG.....15.8
Best MPG.....19.5 (between Des Moines and Cleveland, probably with a tailwind.)
Worst MPG...7.8 (into the Maze District of Canyonlands)
Average gas price...$3.69/gal
Miles...4863
Furry animals killed...1 bunny (smacked him along SR24 near Hanksville...little bugger took out a foglamp and nearly catapulted onto the hood.)

Much like the final Lord of the Rings movie, this post just never seems to end. I may post an epilogue...I may not. I'll just leave you in suspense.

Thus endeth the Great Western Expedition of 2011. (I'm already looking for obscure roads in the boondocks for our next adventure, whenever that is...Poison Springs Road sounds like fun.)

Love the pics of the peaks! They're great! That's one heck of a trip! Some gas bill too!
“We don't stop hiking because we grow old - we grow old because we stop hiking”
― Finis Mitchell
You must log in or register to reply here.
Similar threads