The Great Western Expedition of 2011 capped off with Day One of the 24th Annual Ouray Jeep Jamboree.

There were several trail options available to us: Imogene/Ophir, Imogene/Last Dollar Road, Yankee Boy Basin, Mineral Point/Corkscrew Pass, and Poughkeepsie Gulch. We signed up for Poughkeepsie Gulch and Yankee Boy Basin because we had never been to those areas before. Poughkeepsie would be the most difficult, as the trail is rated an 8 or 9 out of ten, with some tough rocky sections and one obstacle in particular called The Wall...any obstacle named the Wall can't be a good thing. We fully expected to be strapped up it. We had to have the Libby inspected by one of the TLs to make sure it was up to the task...aggressive tires, adequate ground clearance and recovery points mandatory. We passed. 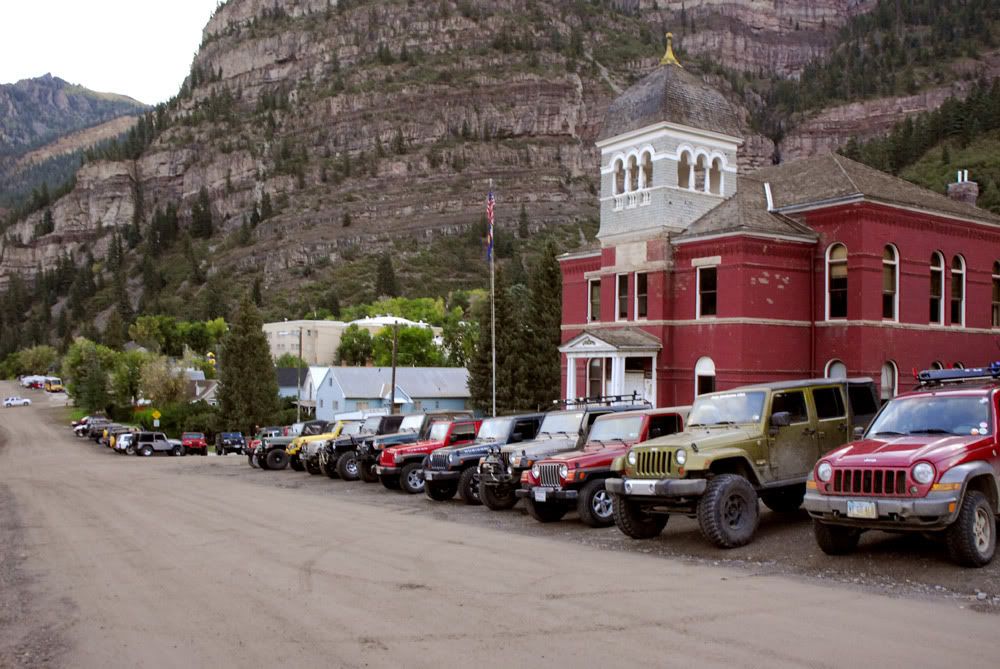 We assembled for breakfast and briefing in town for the first day on the trails. Jeep Jamboree hires in a family from a Monticello, Utah restaurant (the Lamplighter) to provide food for the JJ participants and TLs. Breakfast, packed lunches and dinner, very good food all around. This jamboree had a total of 91 Jeeps participate, with one driver coming all the way from Australia (he rented.) 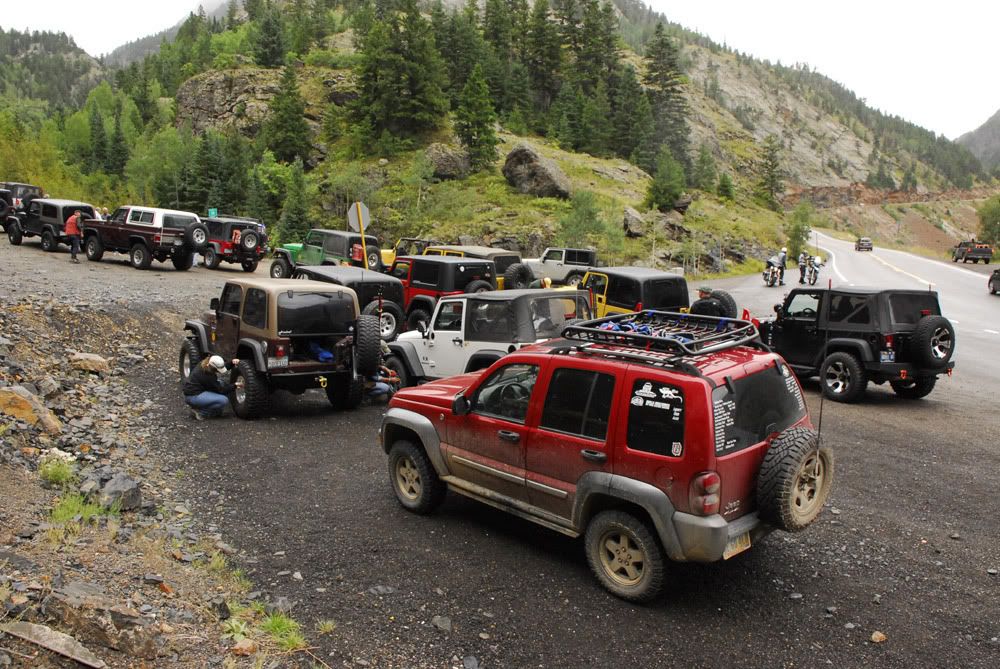 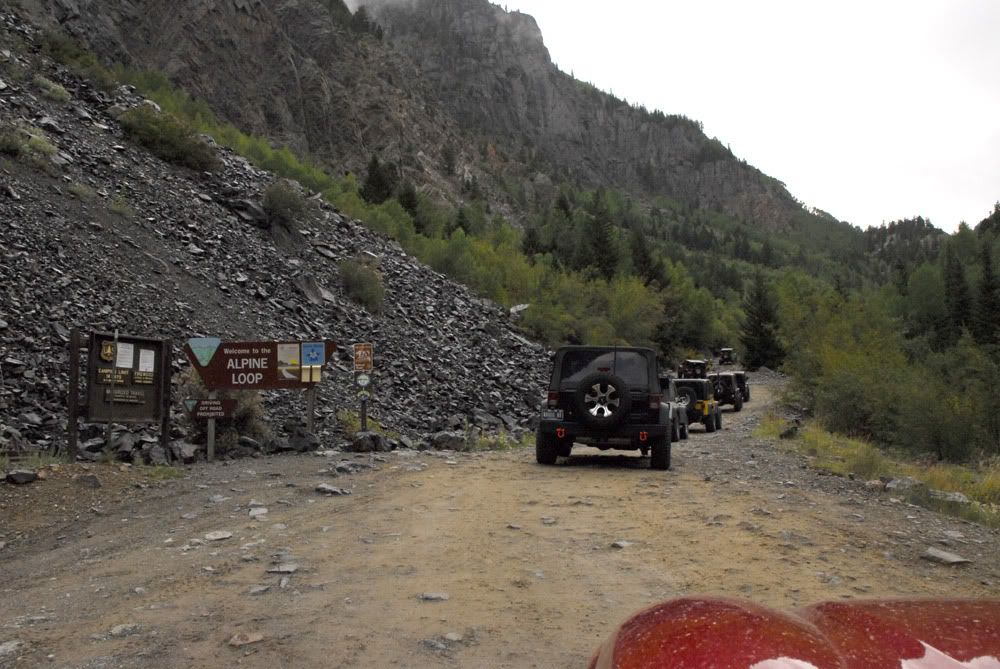 Fed and informed, the Poughkeepsie Gulch gang assembled just south of town, then again at the trailhead. The Mineral Point/Corkscrew group were headed the same way, as were a group of four-wheelers from Durango. We let them all pass. 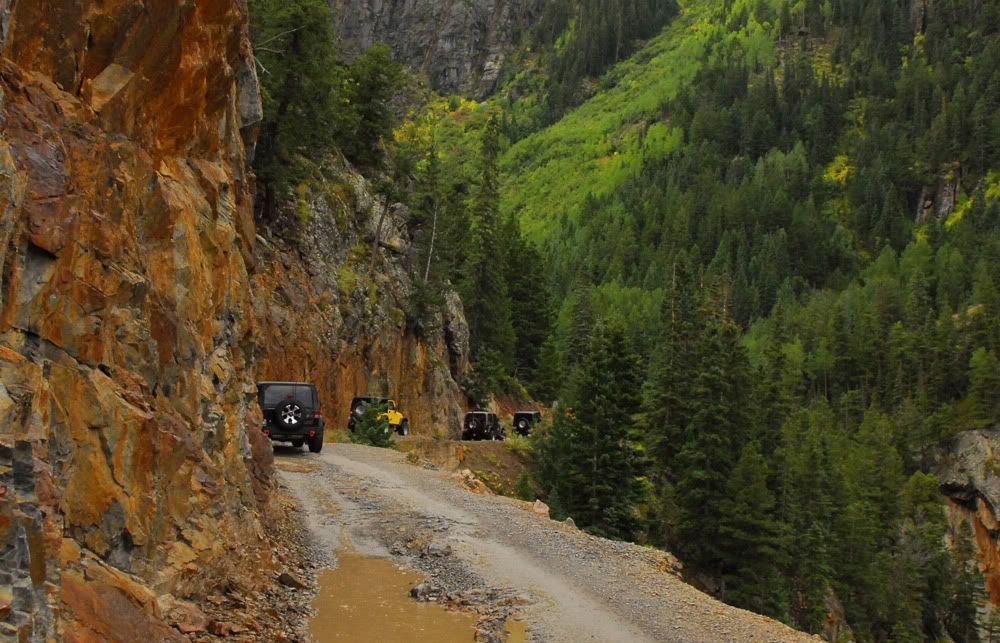 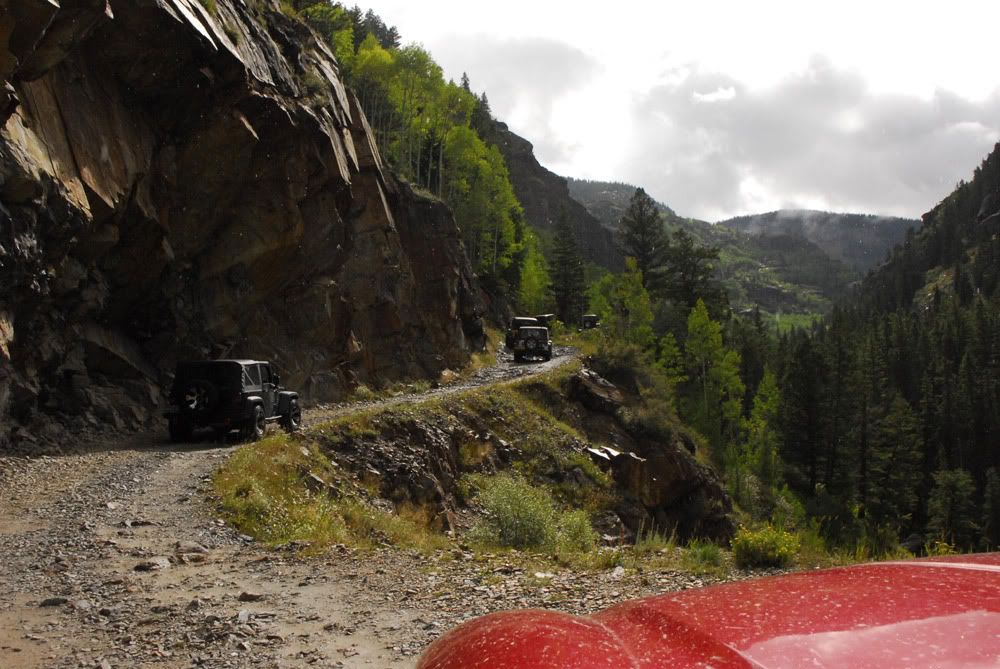 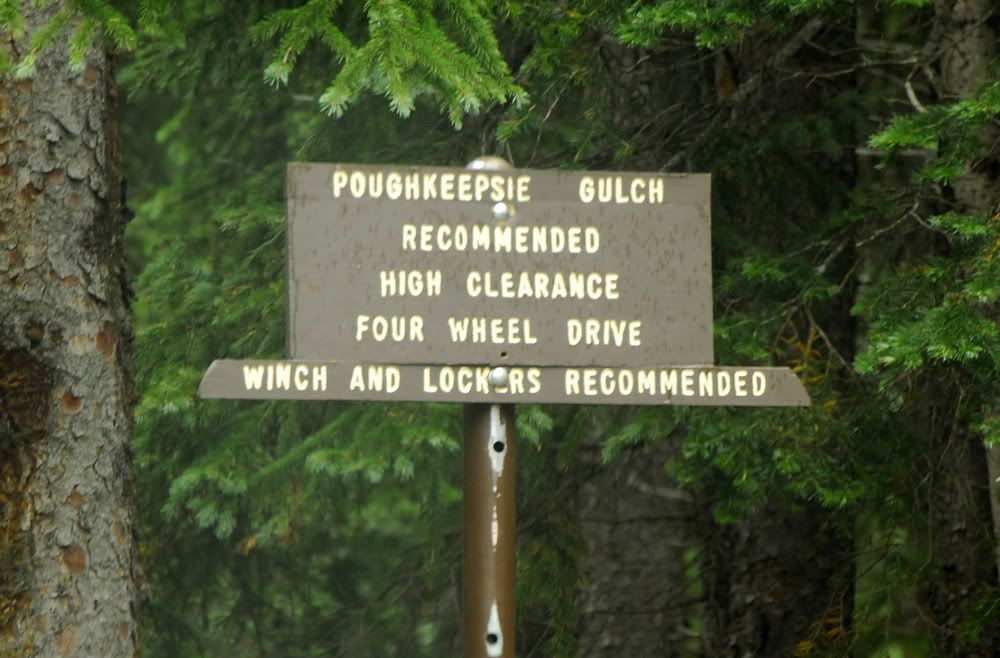 Well, we had two out of four, anyway. 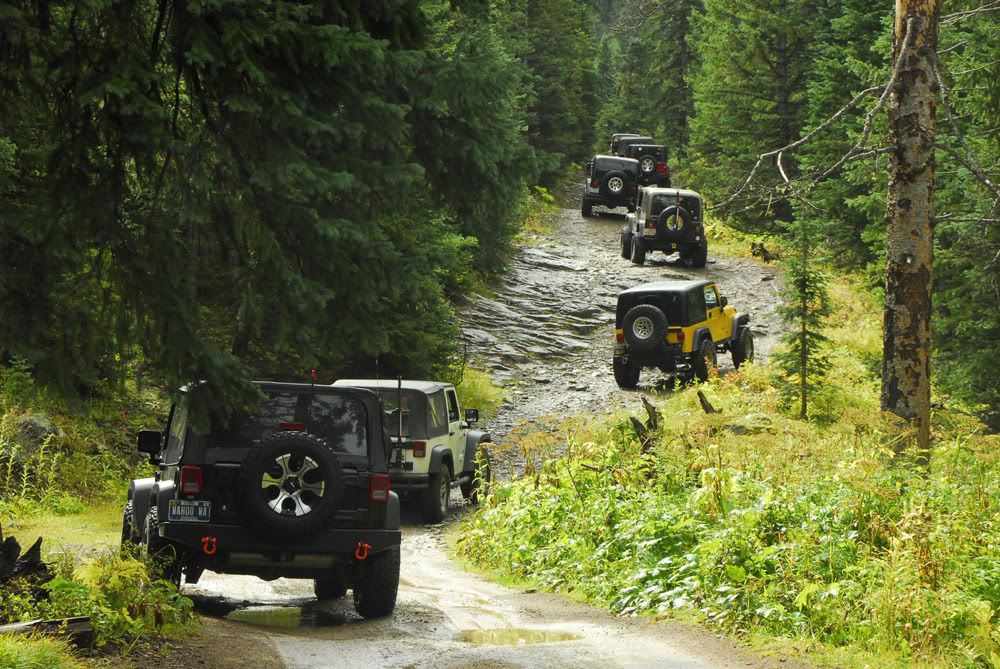 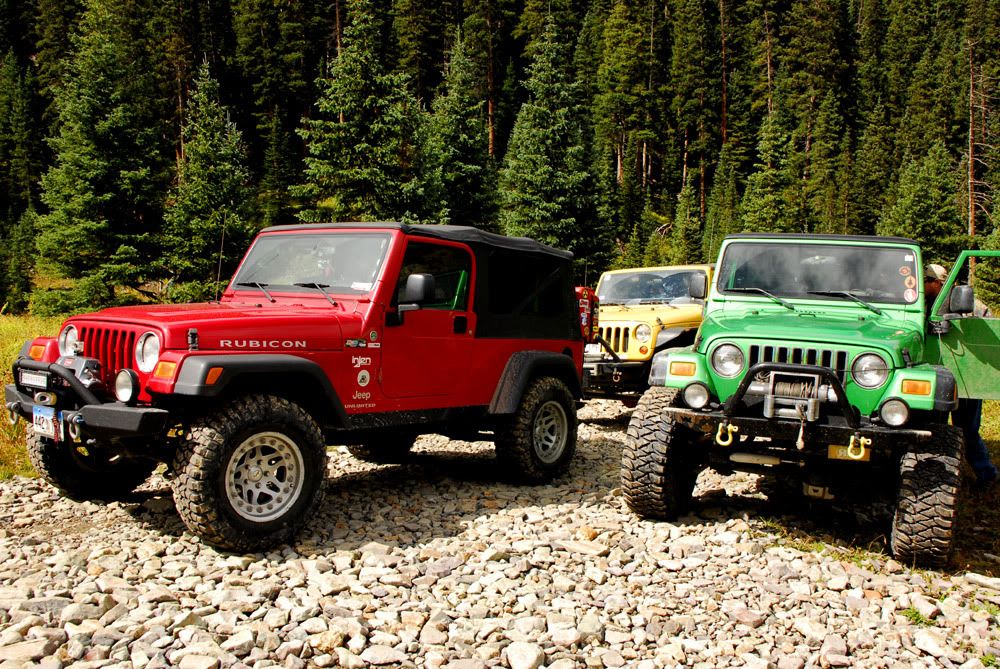 These reminded me of M&Ms. 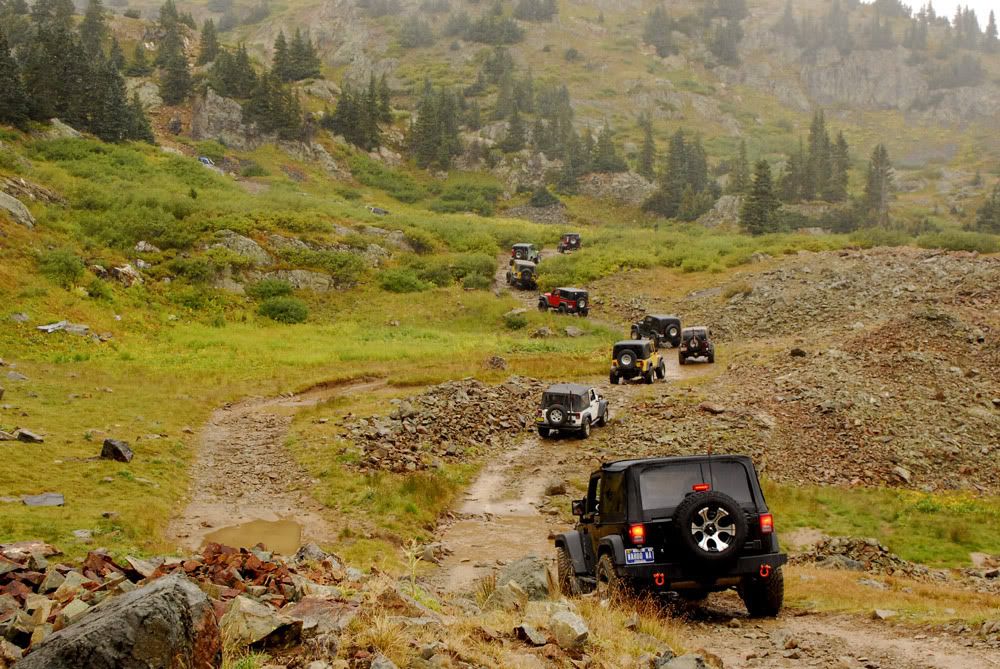 The weather varied, from clouds to sunshine to light rain and eventually snow. 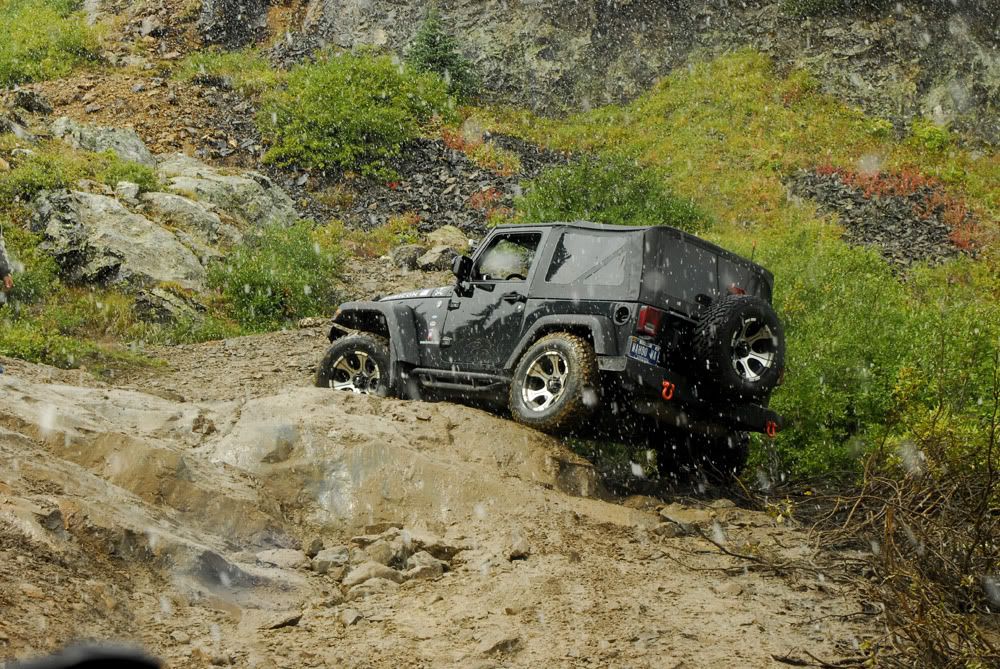 This rock posed our first real challenge. All I can say is, "Armor is your Friend". We didnt bounce anywhere near as much as the guy in front of us did. 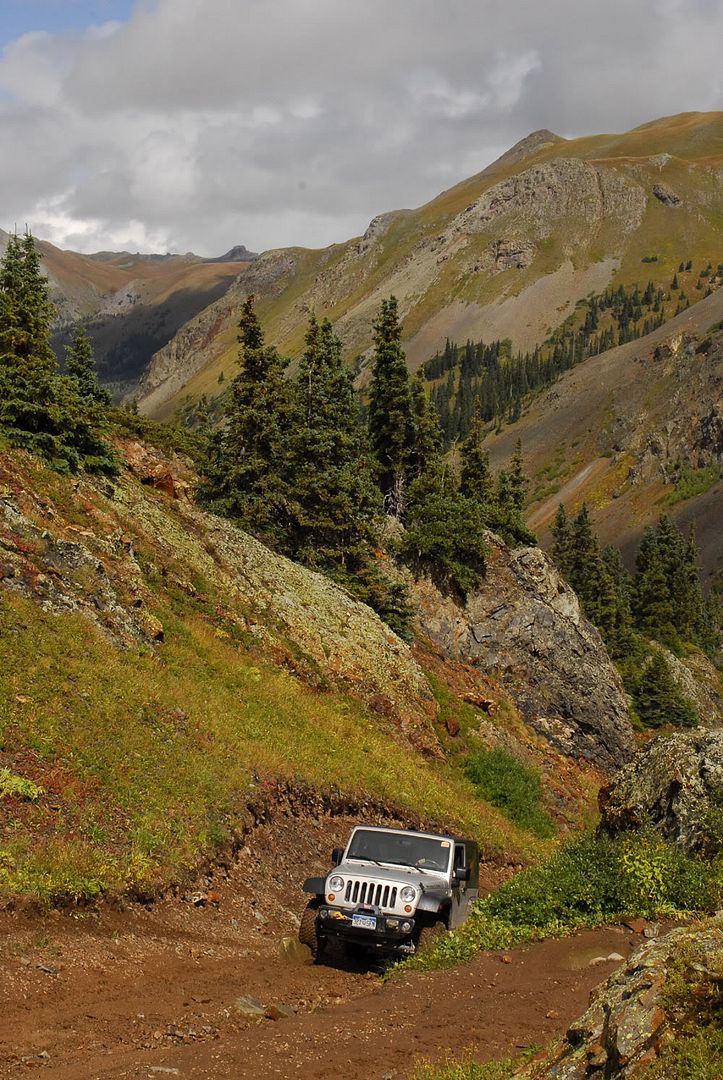 Our tailgunner Chris, who led us over Black Bear Pass. 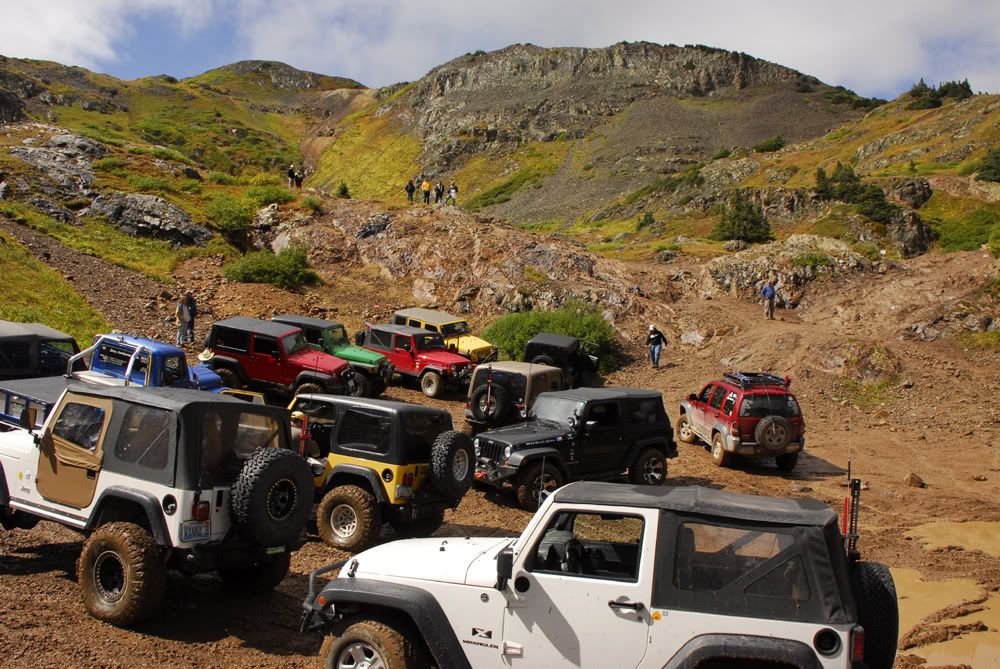 We stopped at the base of the Wall and had our lunch...turkey or roast beef sammiches, chips, Coke and a Snickers bar. We also tried to figure out how in heck we were gonna get over this thing. The Wall was wet and smeared with mud. We may have had a chance if it were dry, but slathered in mud? 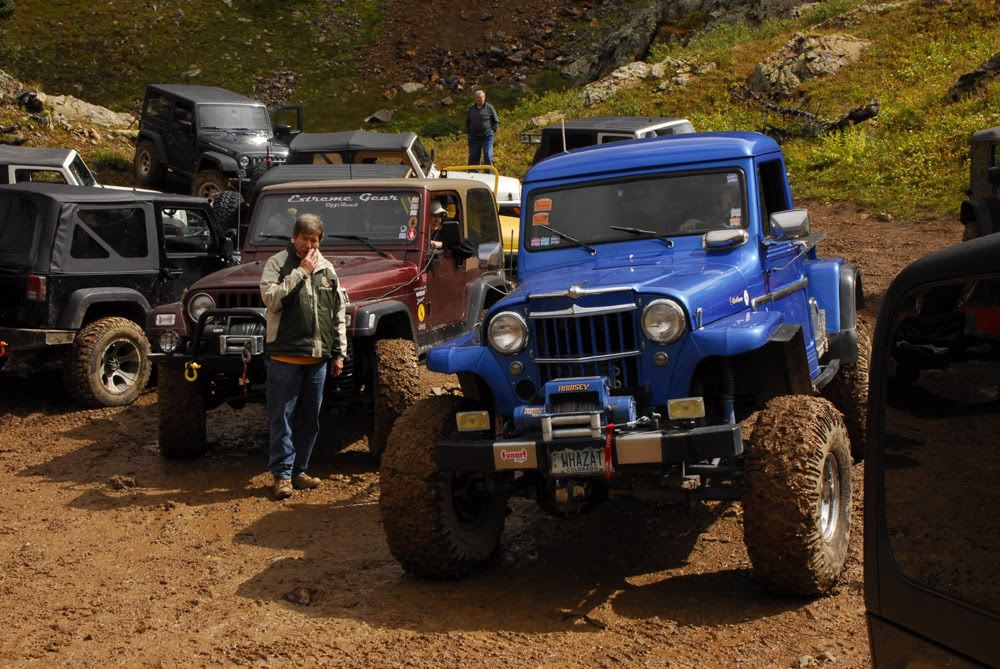 This amazing '63 Willys belongs to TL Bob Arnett...that he takes it out and actually wheels in it is even more amazing. 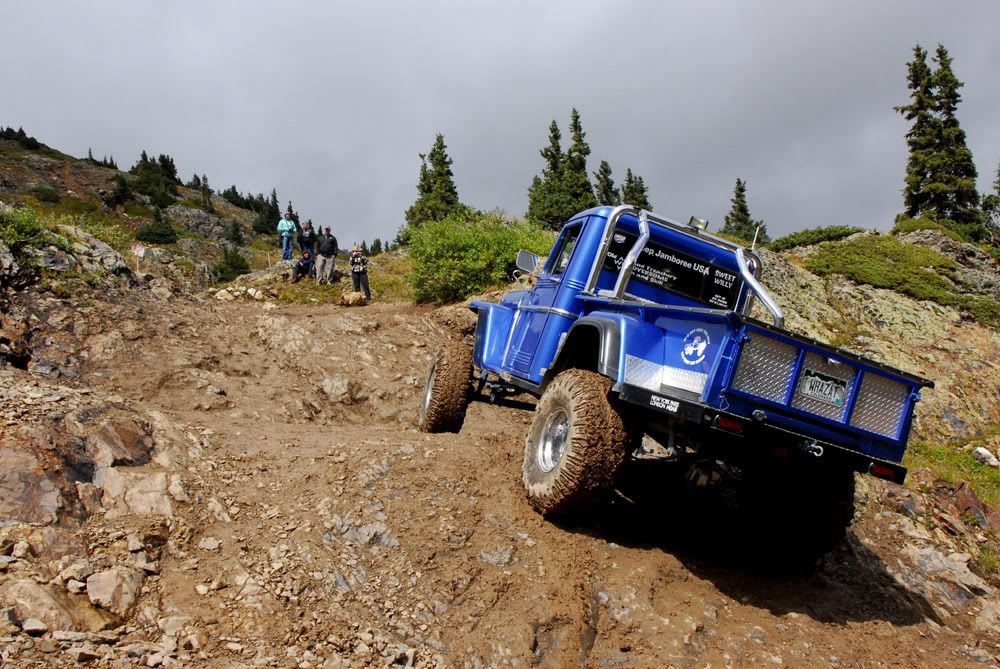 Chris had said that if anybody could get up the Wall under these conditions, it would be Bob. They both later said that the conditions here were the worst they had ever seen. 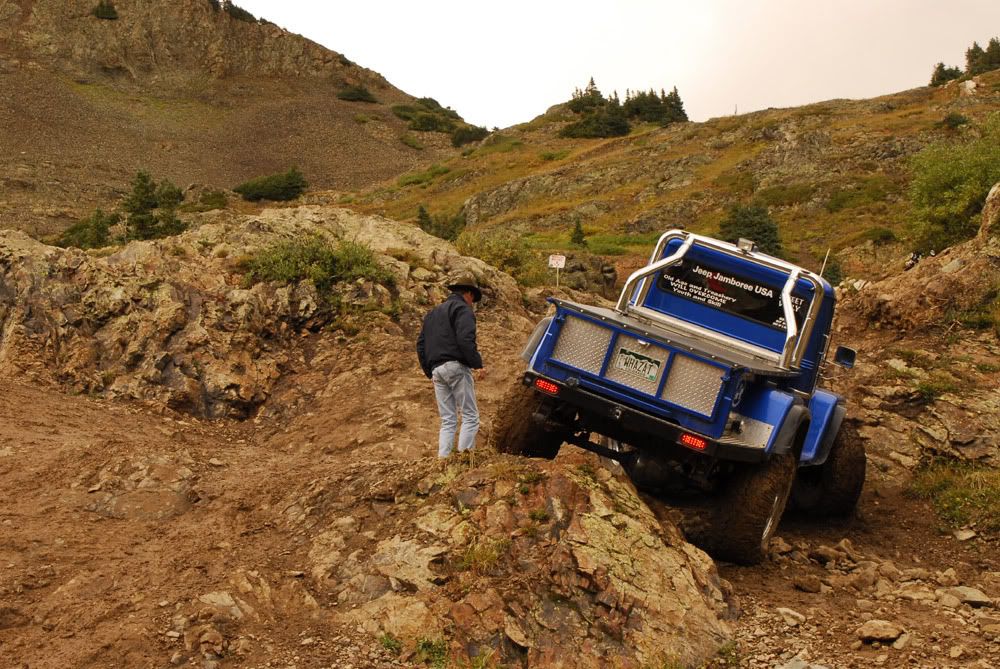 Well, maybe not. Bob couldnt gain much traction going up and ended up sliding sideways a bit. He had to be stabilized, then winched over the Wall by a guy with a Jeep who was on his way down the gulch. 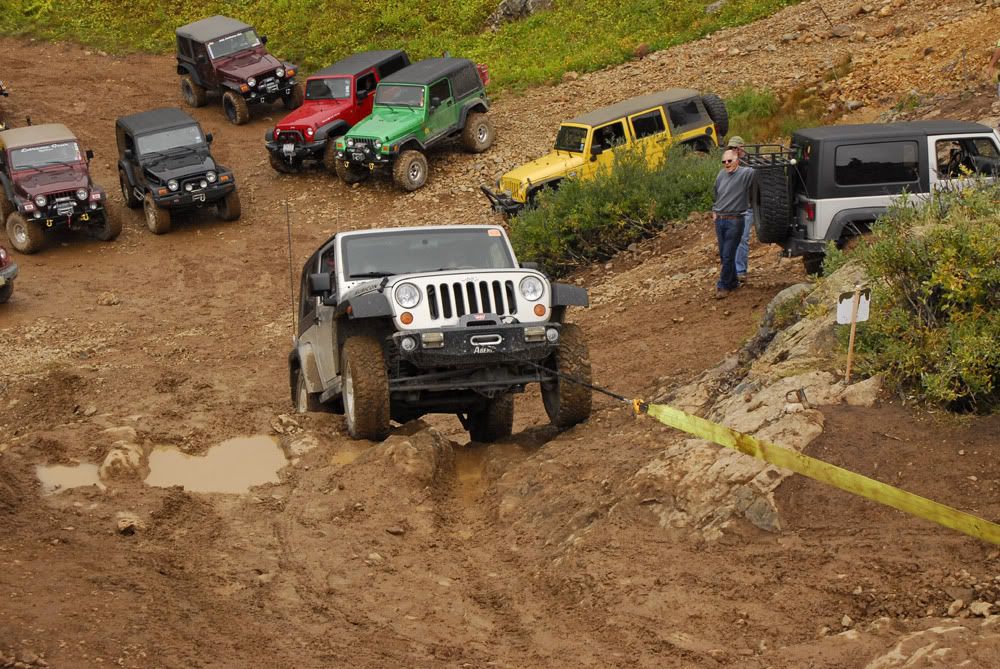 Once he got on top, Bob began strapping people up. Everybody was given at least two tries to make it up on their own...only one Jeep out of our group of about 15 got up the Wall under their own power (the one guy who made it did so with brute force and luck.) 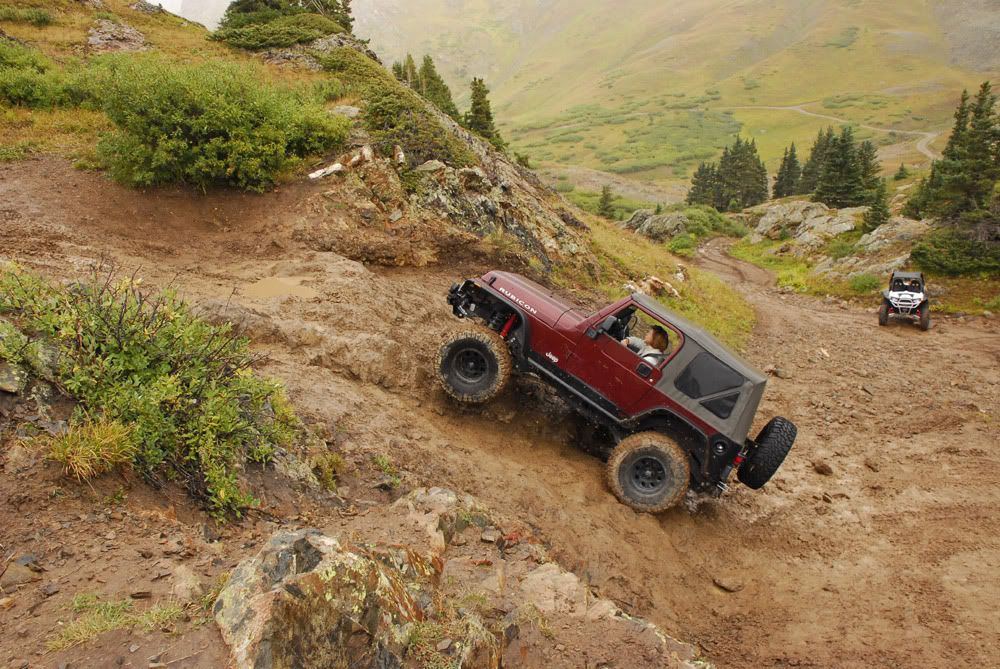 I didnt get a shot of the guy who made it...I didnt expect him to, so I didnt have the camera ready. 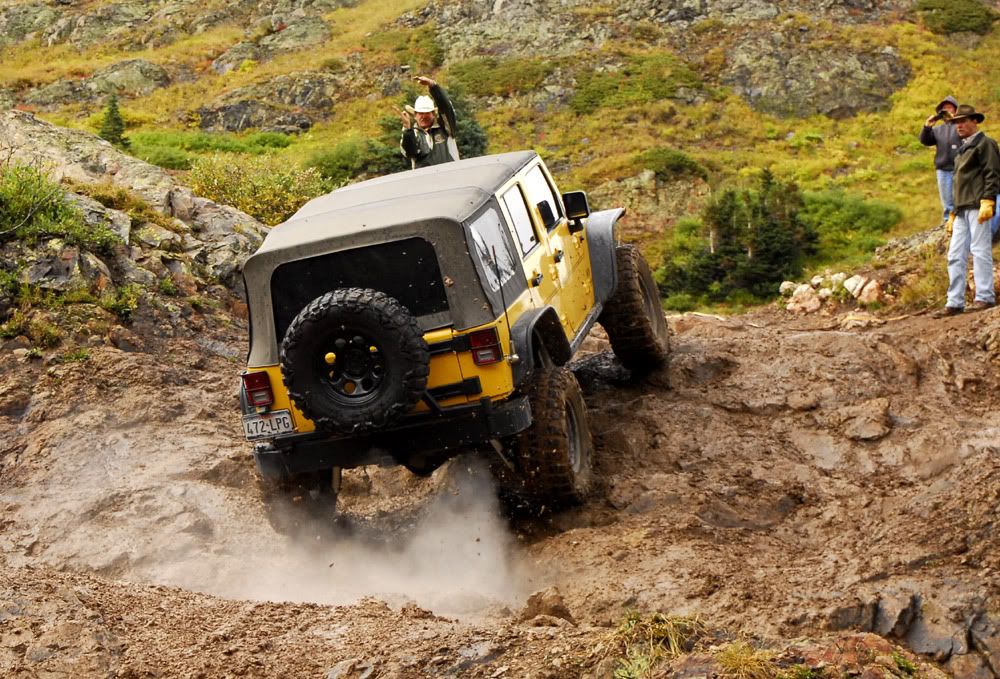 Since Linda drove Black Bear, I drove Poughkeepsie...and was a little too busy to get any shots of our attempt. 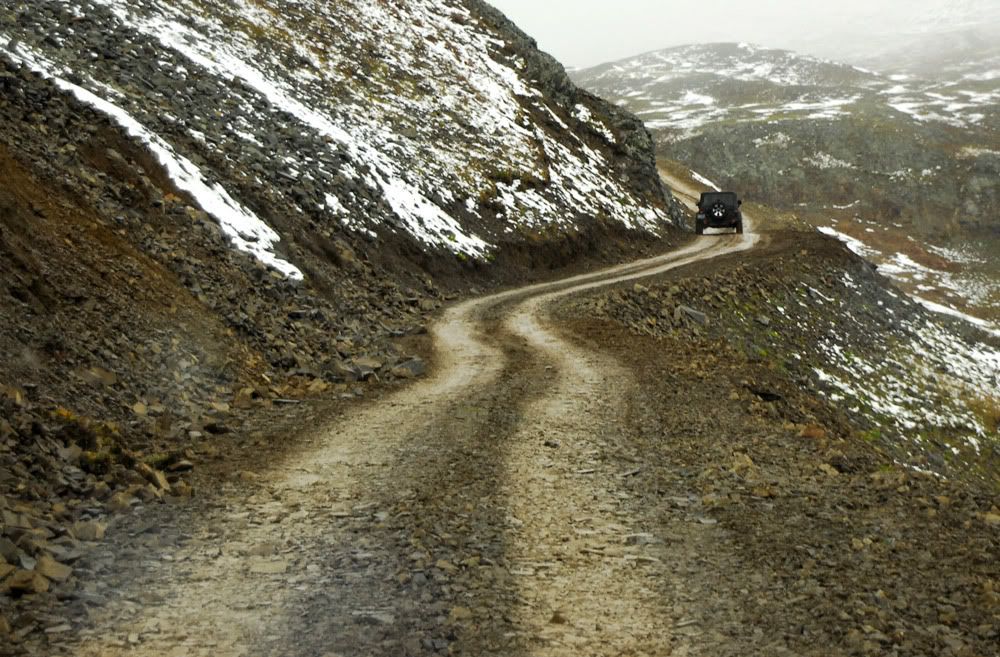 It took almost two hours to get everybody over the Wall. There were some rocky sections beyond that, but nothing that posed any problem. It was snowing, though. 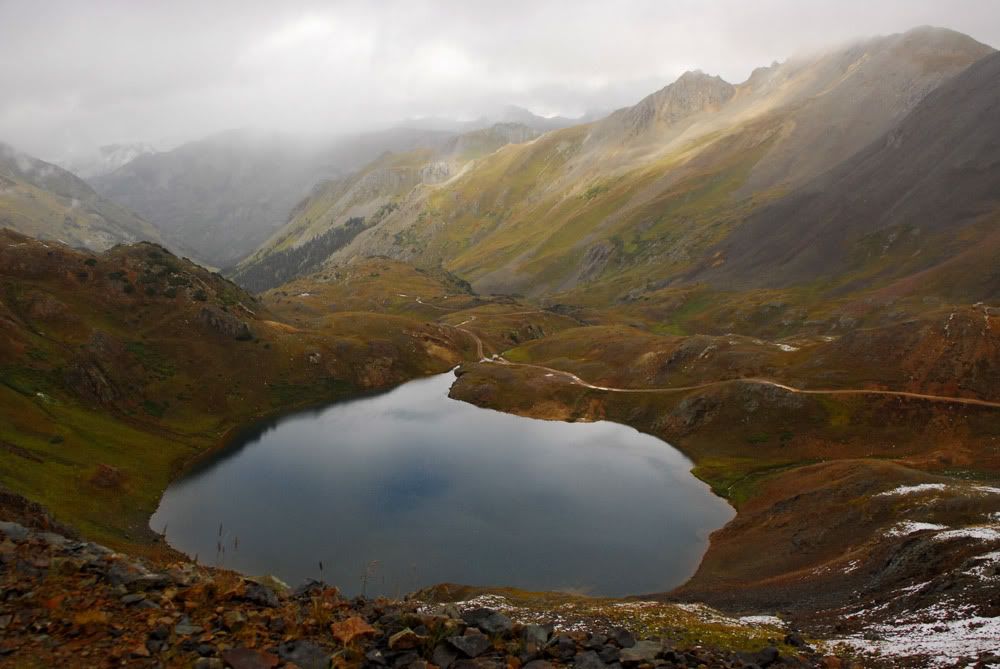 The trail ends near Lake Como and joins up with the trail from California Gulch. 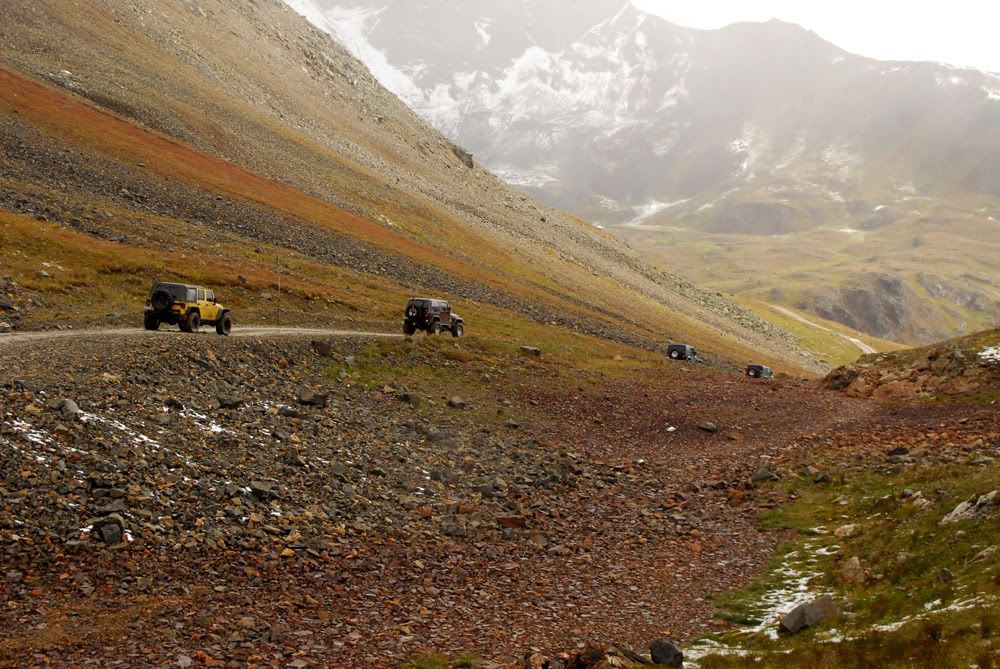 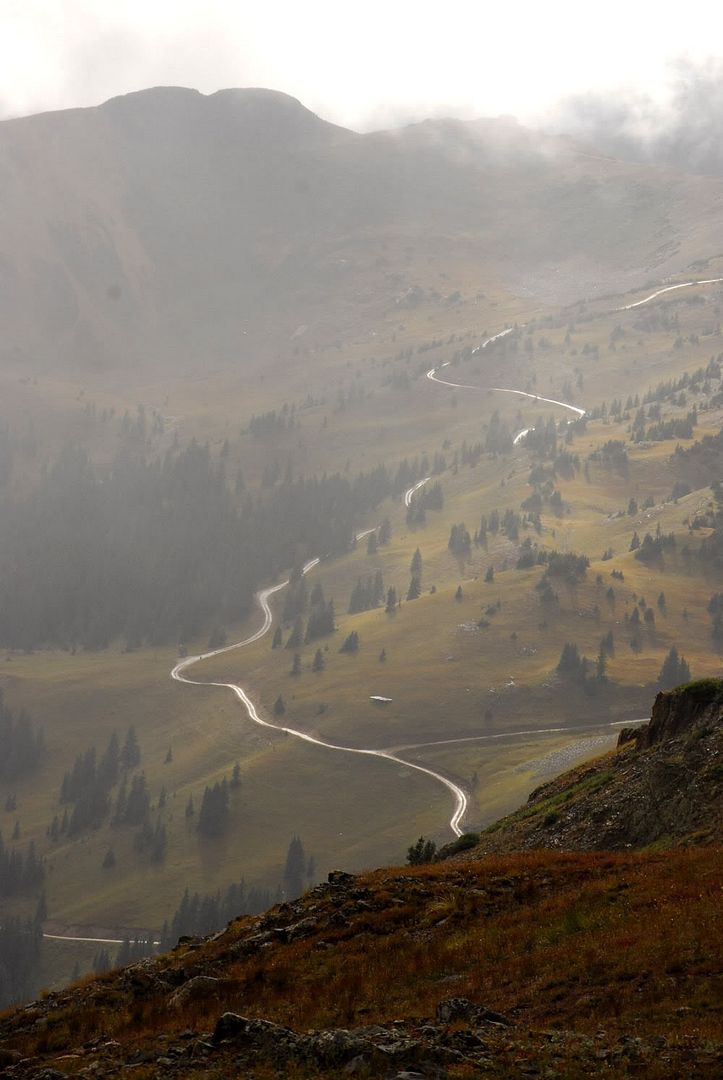 The trails were wet but not difficult...and they gleamed in the sun. 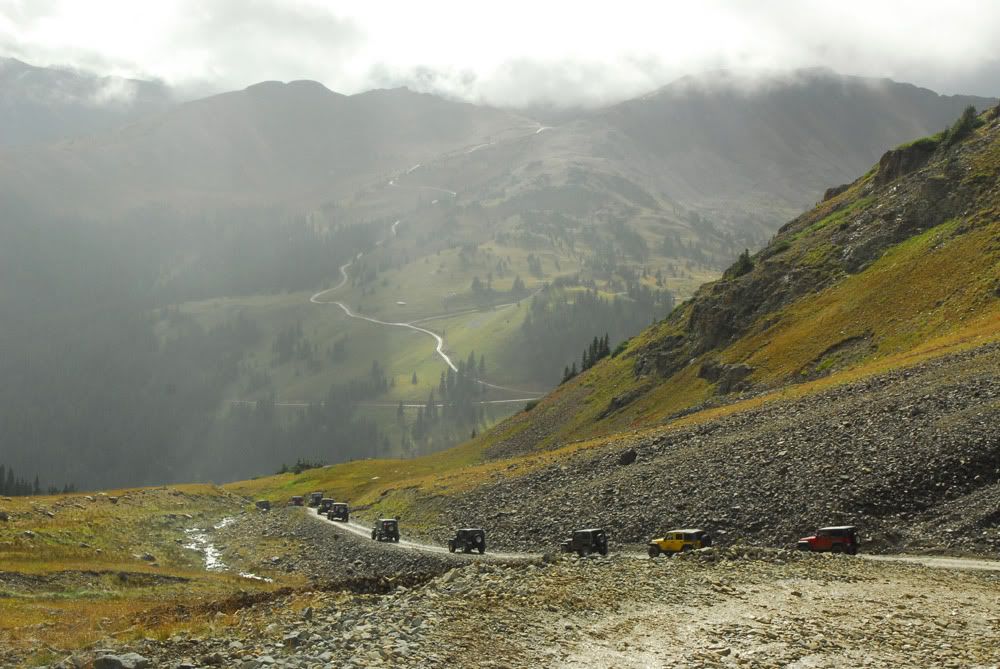 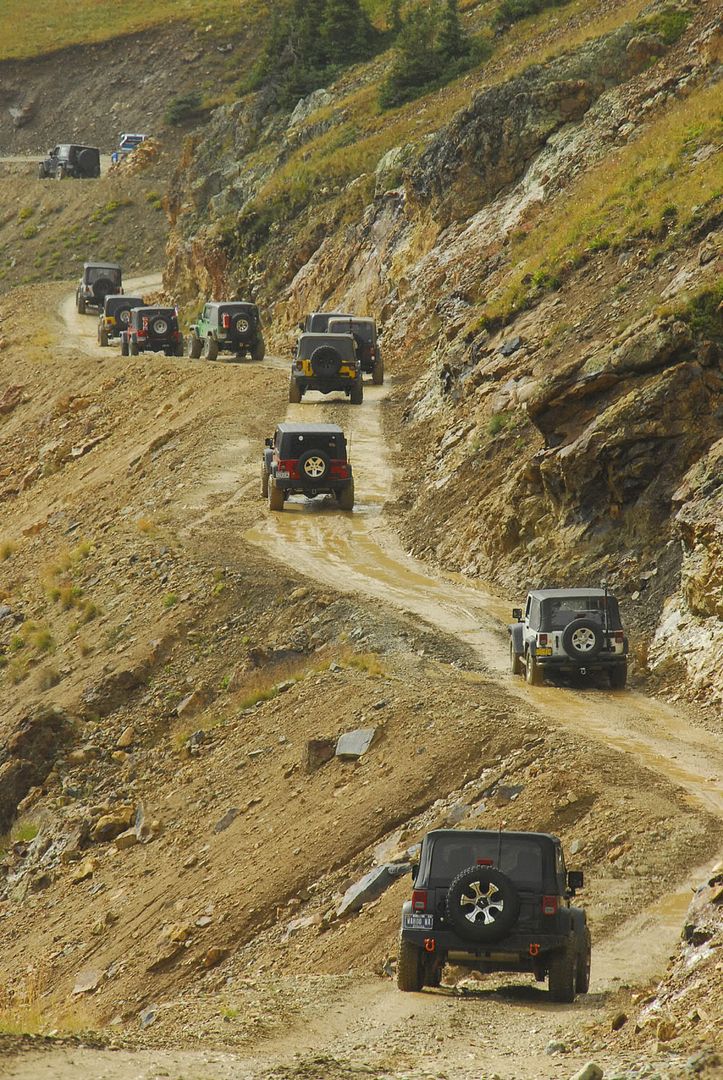 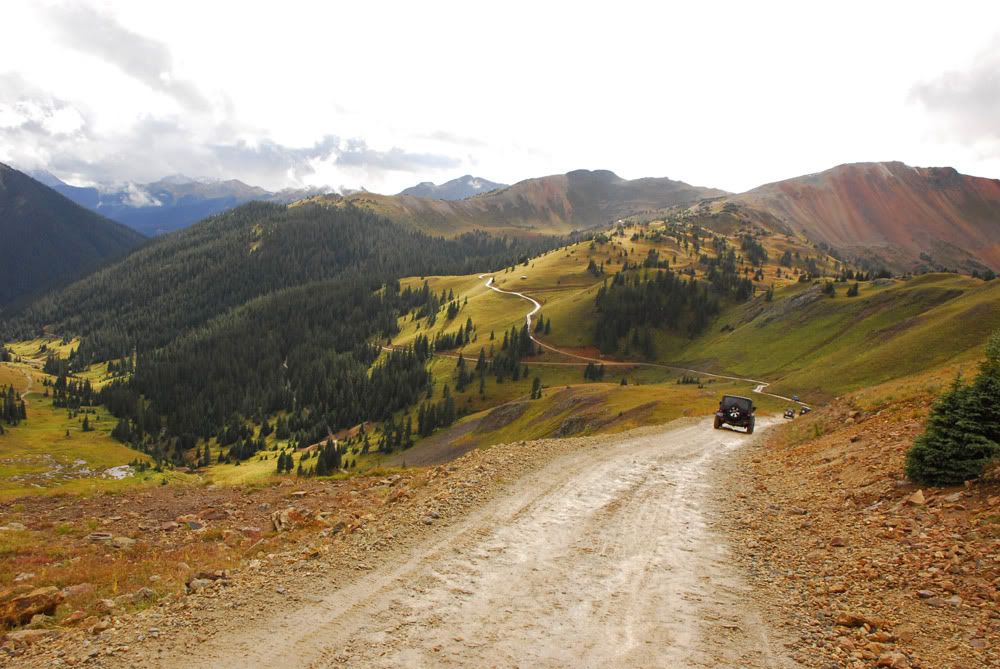 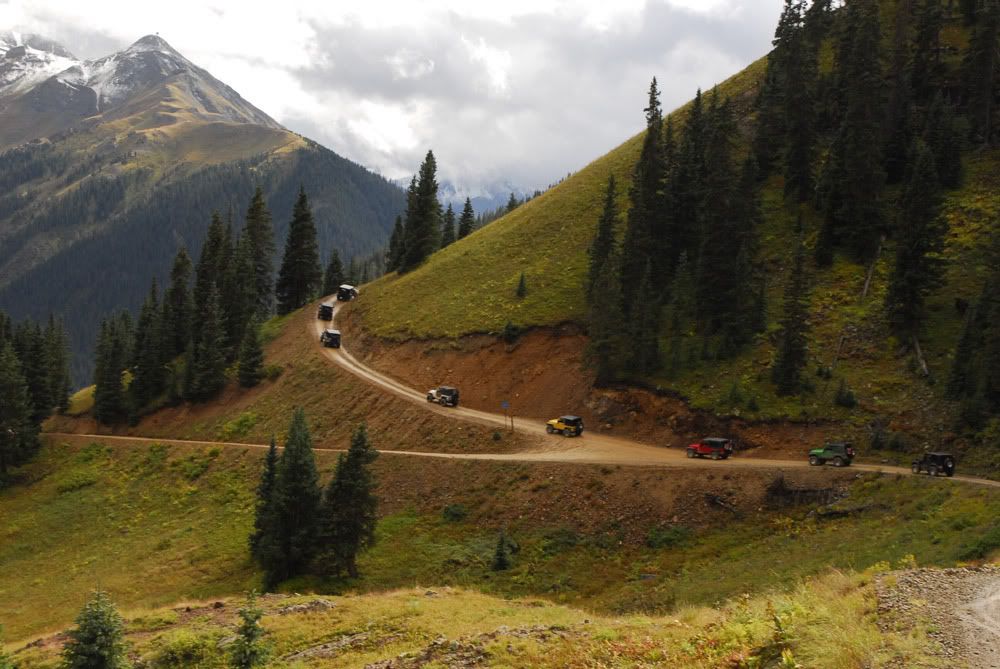 The trail breaks off towards Corkscrew Pass. 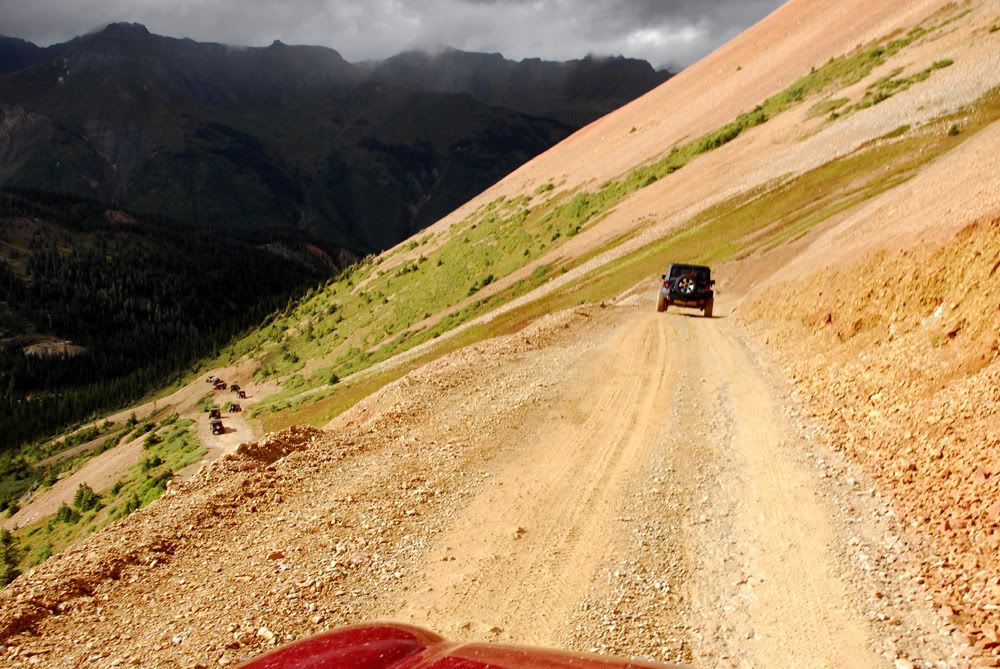 Heading down from Corkscrew Pass towards US 550. We were on this section two years ago in a driving hailstorm, with lightning...it was nice to see it in the sunshine instead. 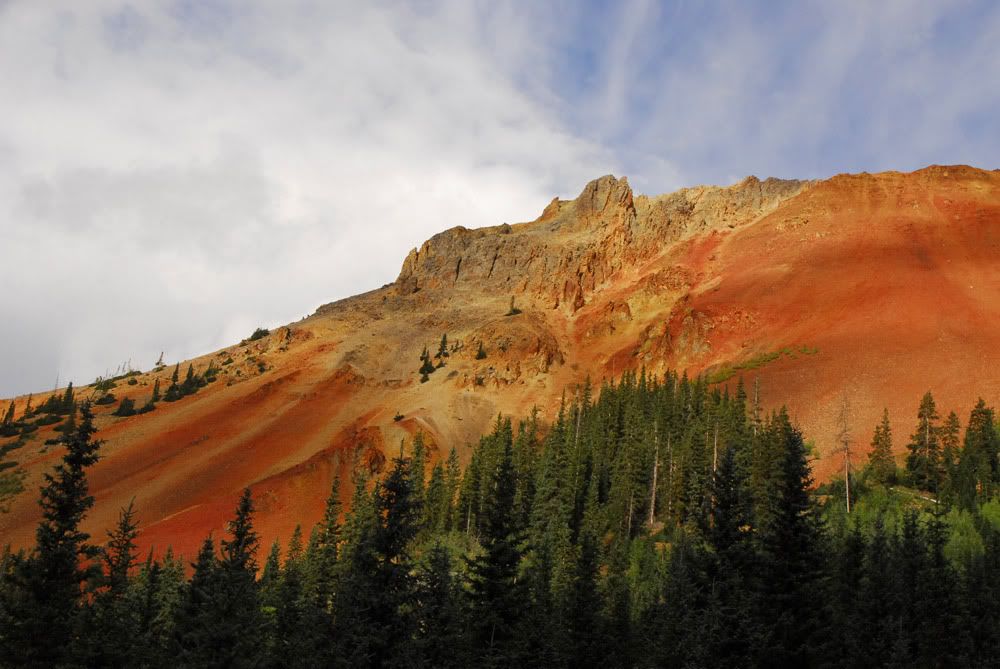 Next up, a snowy end to the Great Western Expedition.

It's crazy some of the places people can get a vehicle to
You must log in or register to reply here.
Similar threads