The Chandler Family Get Together in Glacier 2018: Day 5

After four days of adventuring (Day 1, Day 2, Days 3 & 4) we still had one trip on the list of "places Scott has missed these four years" that we planned on visiting to get to. Feeling the miles and knowing what he would be getting himself into, Jeff elected to not join us and have a lazy day. Shame. So dad and I drove out to Many Glacier again, this time for an off trail route up to Snow Moon Basin. If I remember right, this was the adventure that really opened my eyes into what my dad and brother were starting to get themselves into in Glacier National Park. Memories of all walls in Glacier being shear cliffs bamboozled as they got to these remote places, so I had to see what they were getting themselves into. Yeah just a few days before, Jeff, myself, and my two ranger friends of Glacier had had quite the epic journey, but still, I had to see what had started dad and Jeff on all this.

This morning dawned probably our smokiest of the trip. Driving around to Many Glacier we could look straight at the sun to minimal blatant pain. A part of me wishes we had stopped to catch a picture of it, but we were racing to beat the crowds. After the previous day... we have a new respect for the crowds of Many Glacier... Dad said he has never seen the parking lot of the hotel as full as we saw it, so early. People... so many people. Luckily, we weren't going where others were going.

From the hotel we quickly hopped off the trail and gained elevation through the forest. Very quickly, and the scale of everything else lends that to feeling more extreme I think. 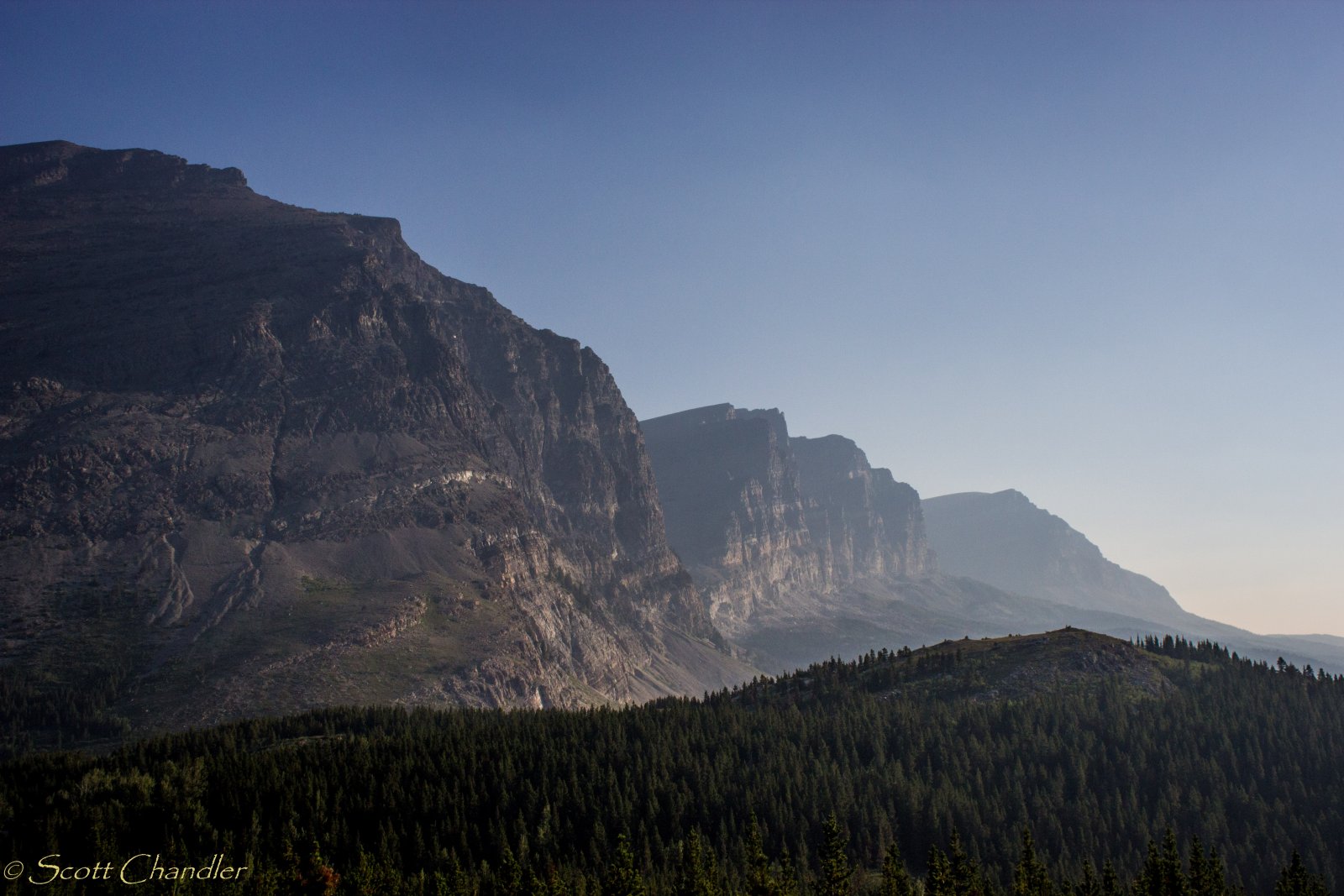 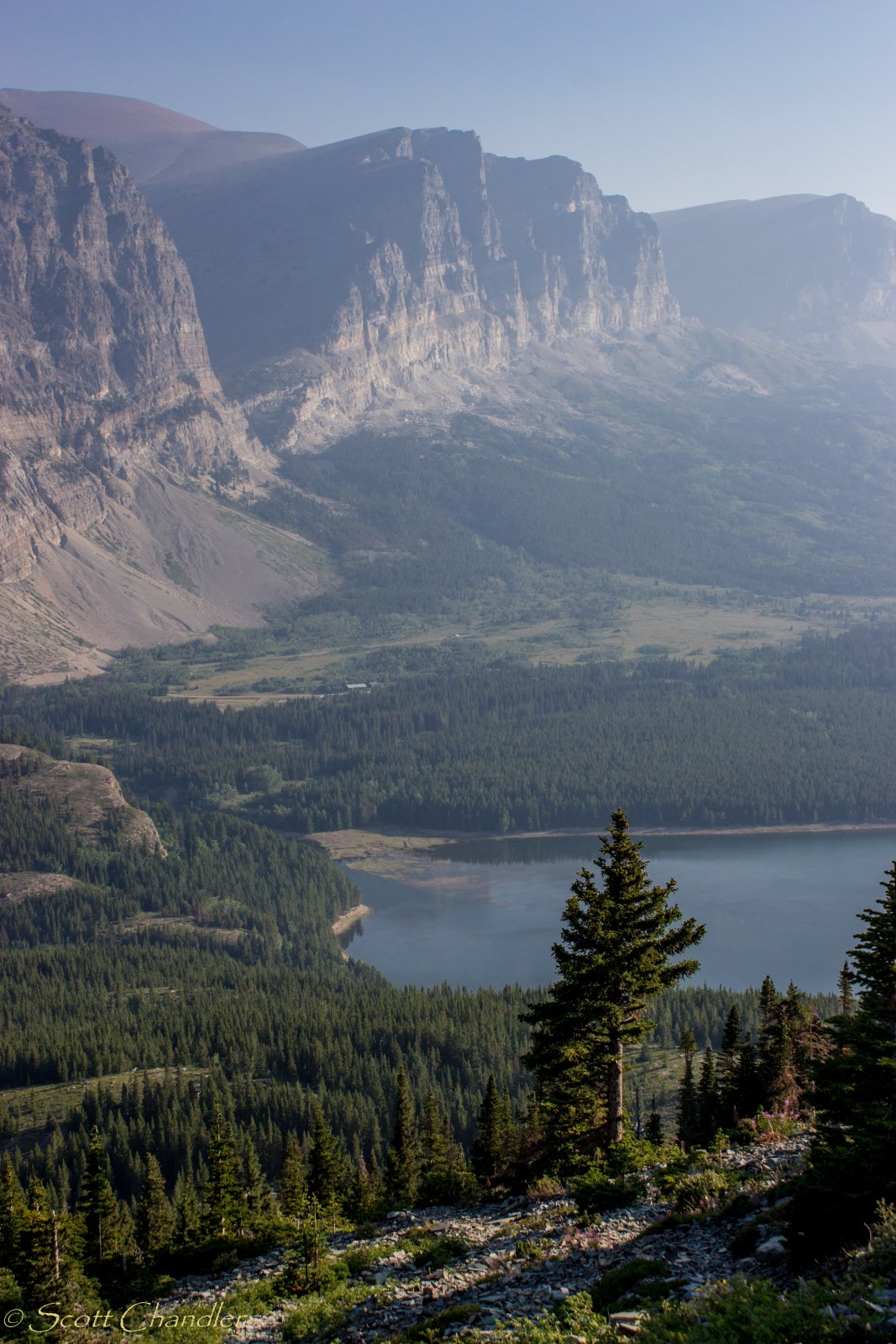 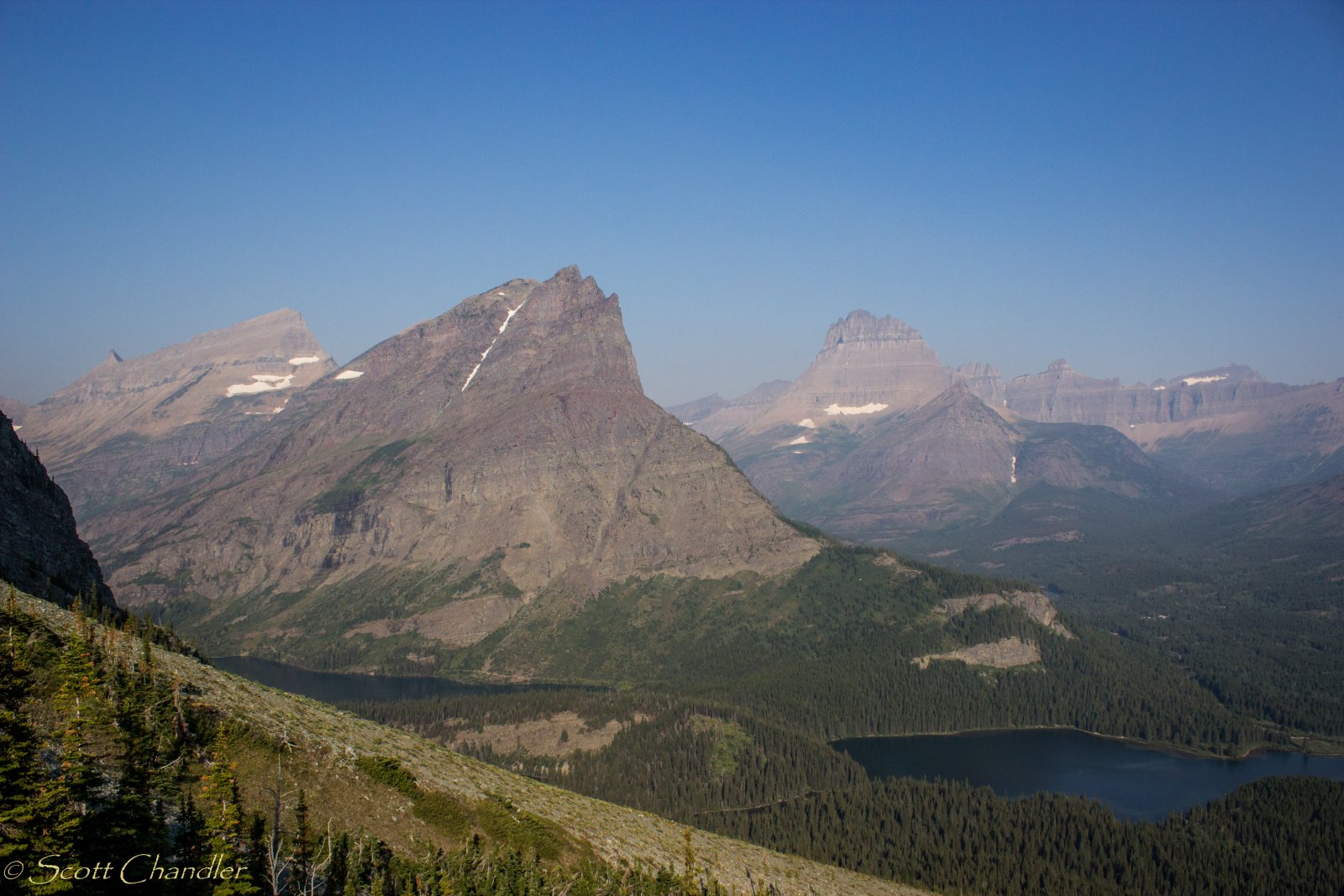 Eventually we hit quite the scree slope. Dad and Jeff had filled my mind with its strenuousness. Two steps up, one step back type of stuff. I think that had gotten into dad's head because he lead us up a less direct route that had me thinking "how will we get over there from there?" We made it, no prob, but there was plenty of heavy breathing involved haha. 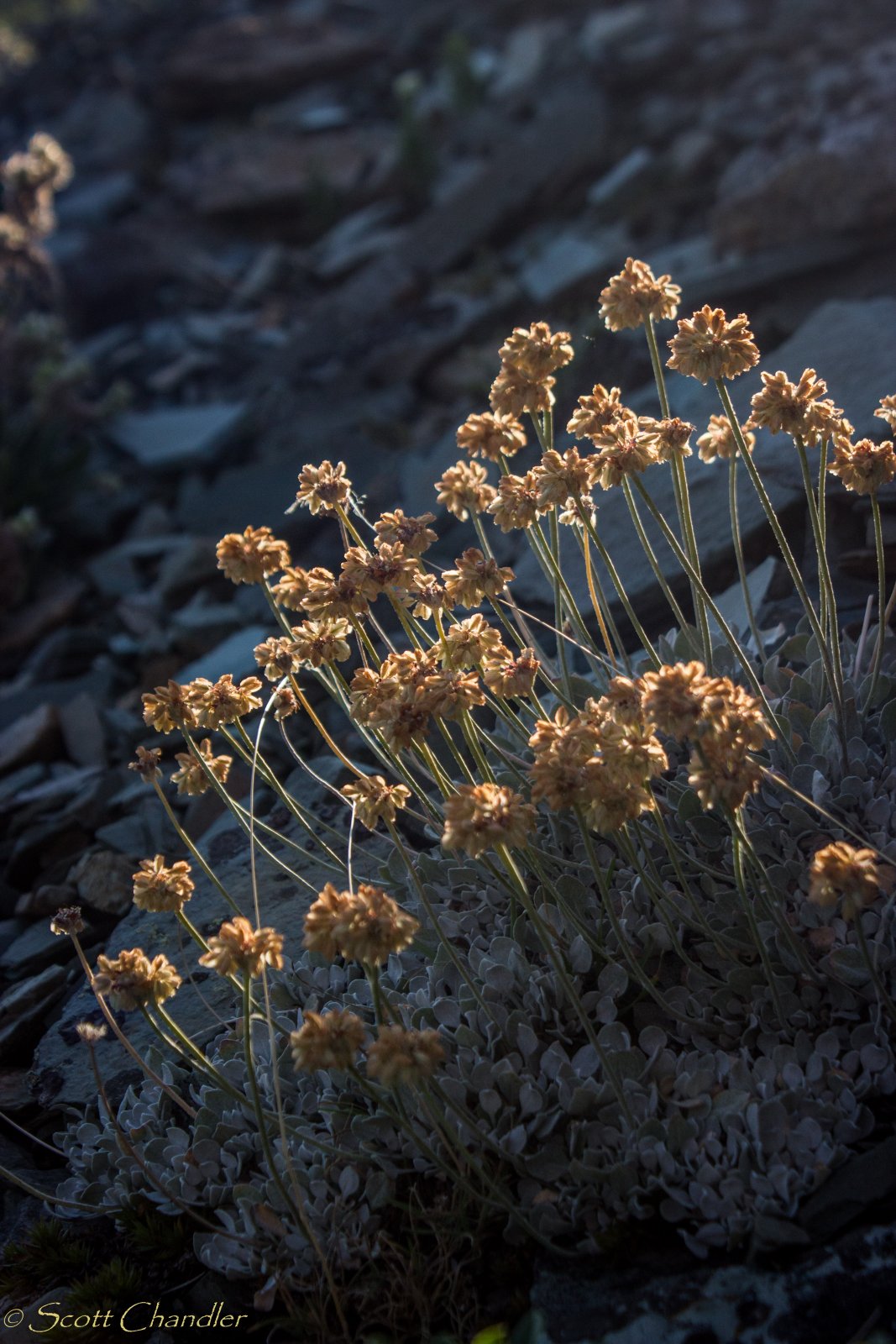 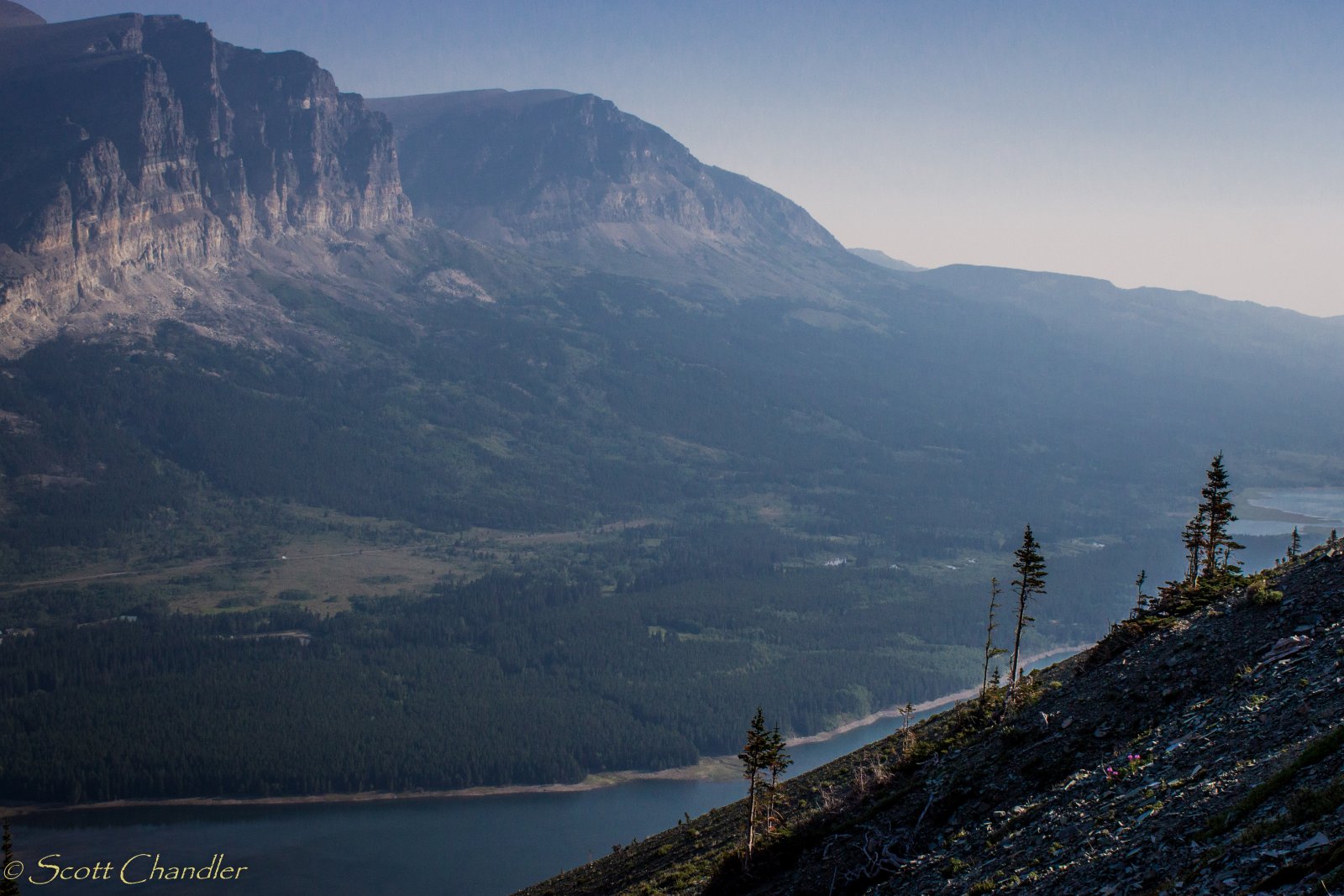 The next part was what I was most curious about. As I said earlier, Glacier is a land of shear cliffs and walls. We now had to somehow cut across one of those.... I wasn't sure how this would go. As adventurous as I am, exposure still gets the blood flowing. The next bit was honestly not awful, most spots and fall would result in a tumble that would hang one up in a bush or tree, but there were a couple couloirs that could go worse. These were why Jeff didn't join us today, wobbly legs made them a bit more nerve wracking. I didn't take many pictures on the way across. I blame the hard morning lighting.... and that I didn't want to stop hehehe.

Can you see the trail in the below picture???? It is in there somewhere. 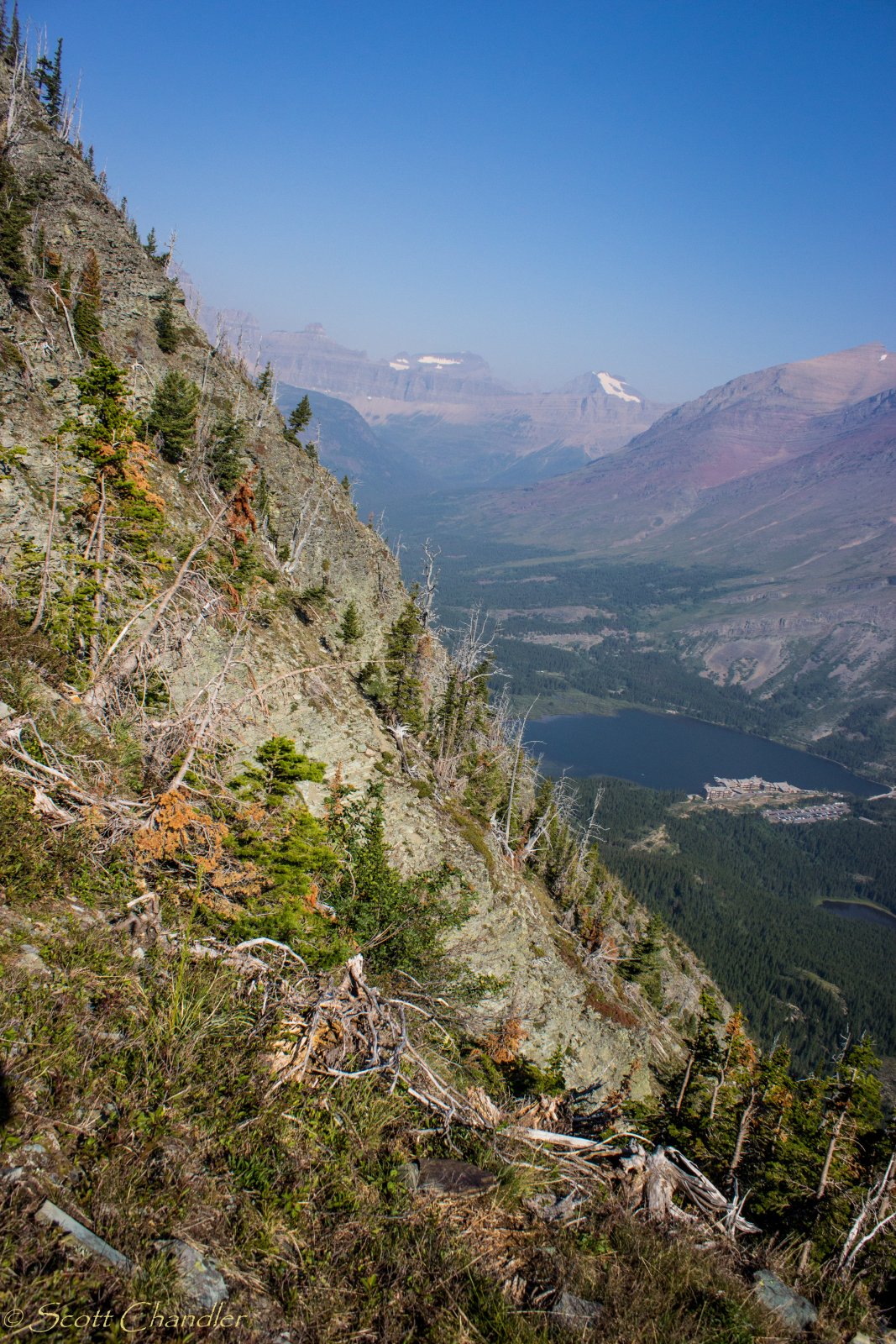 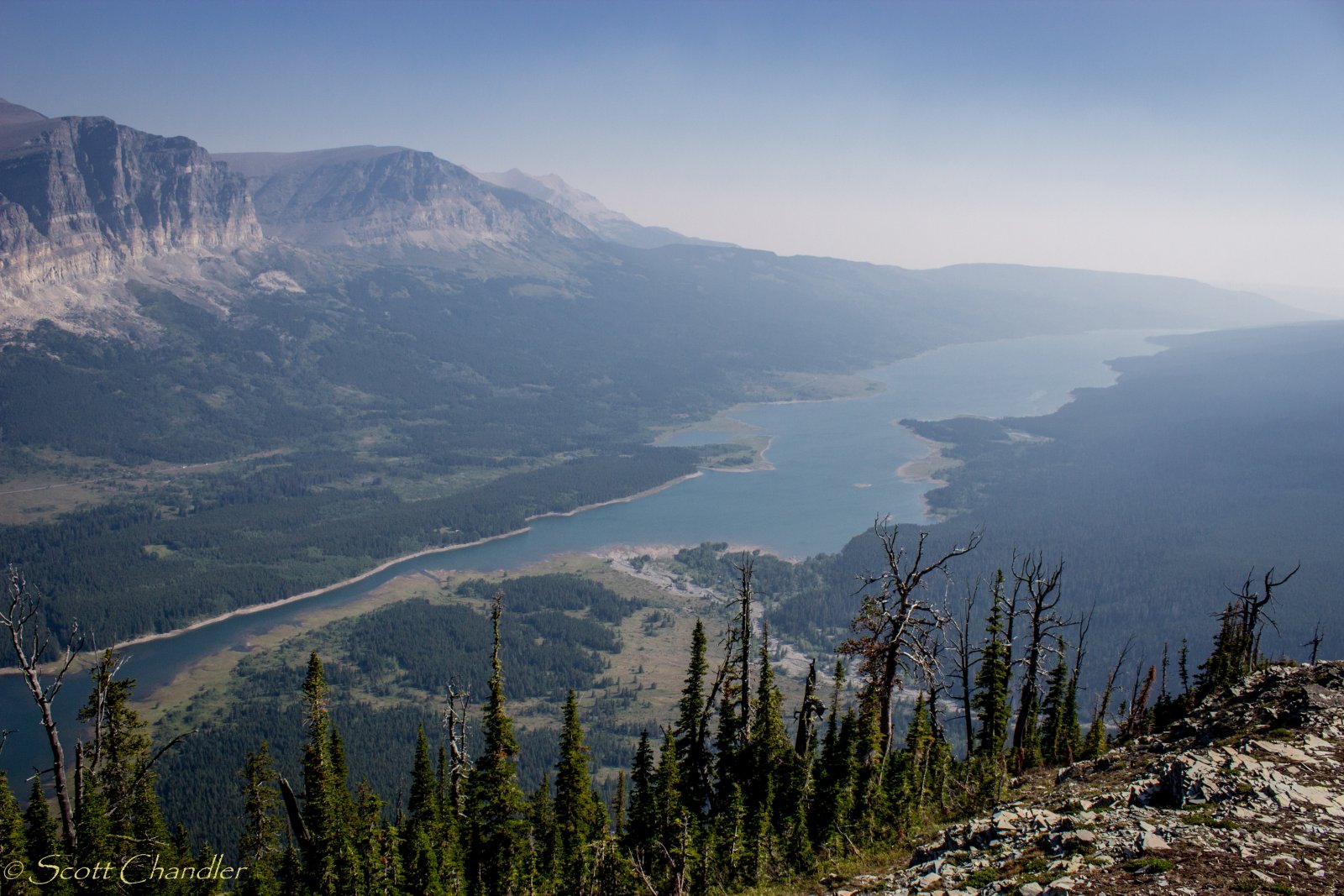 Rounding the cliff was quite the relief. Lake Sherbourne extended below with Cracker Flats nearly cutting it off. I had some fun geo-nerding, thinking about the time spans the alluvial fan has existed vs the recession of the glaciers in the area. It is a massive alluvial fan. Our destination also sat before us, Snow Moon Basin hanging up below Mt Allen. Now to cut across another scree slope to get there. 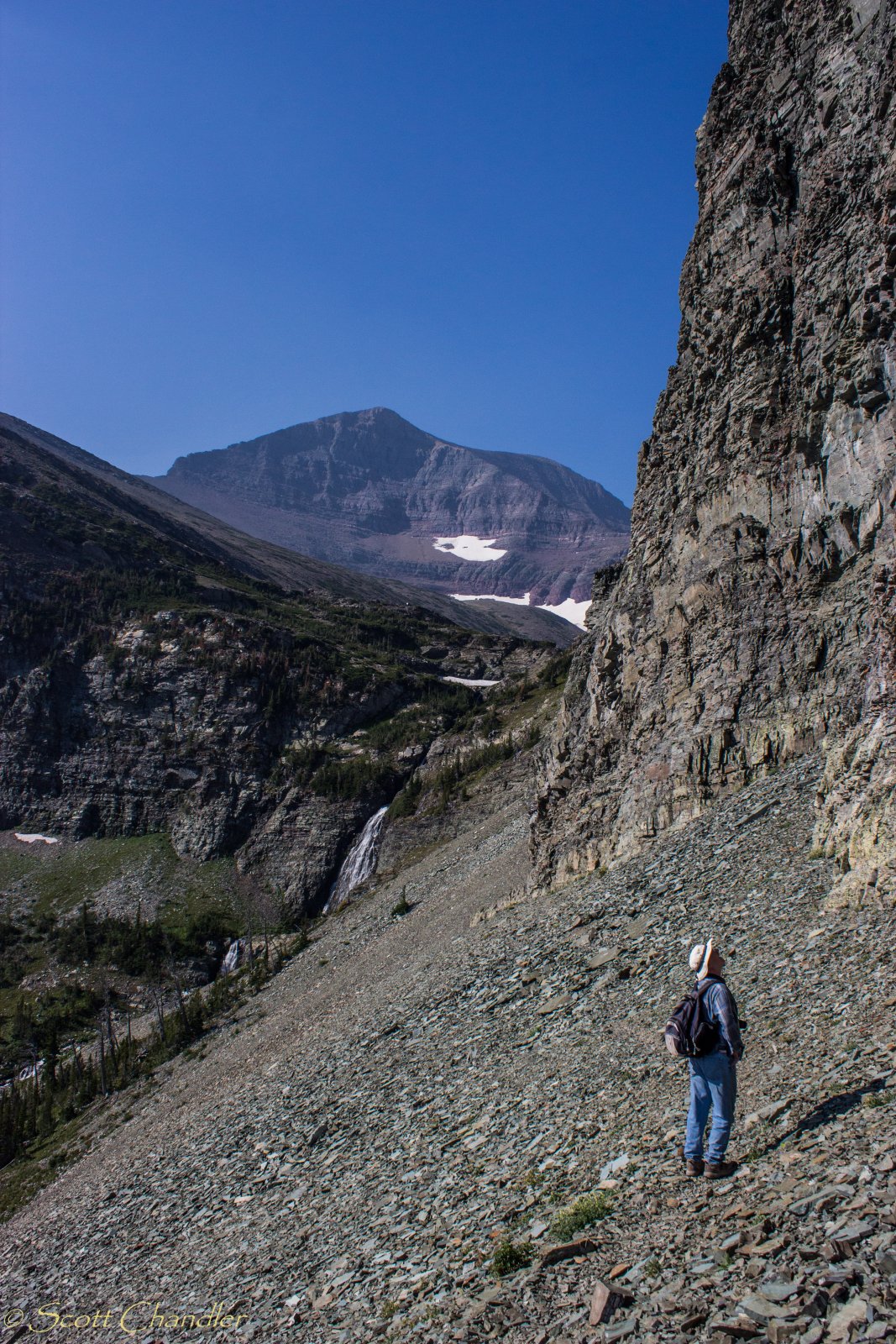 Before too long, Falling Leaf Lake sat before us. 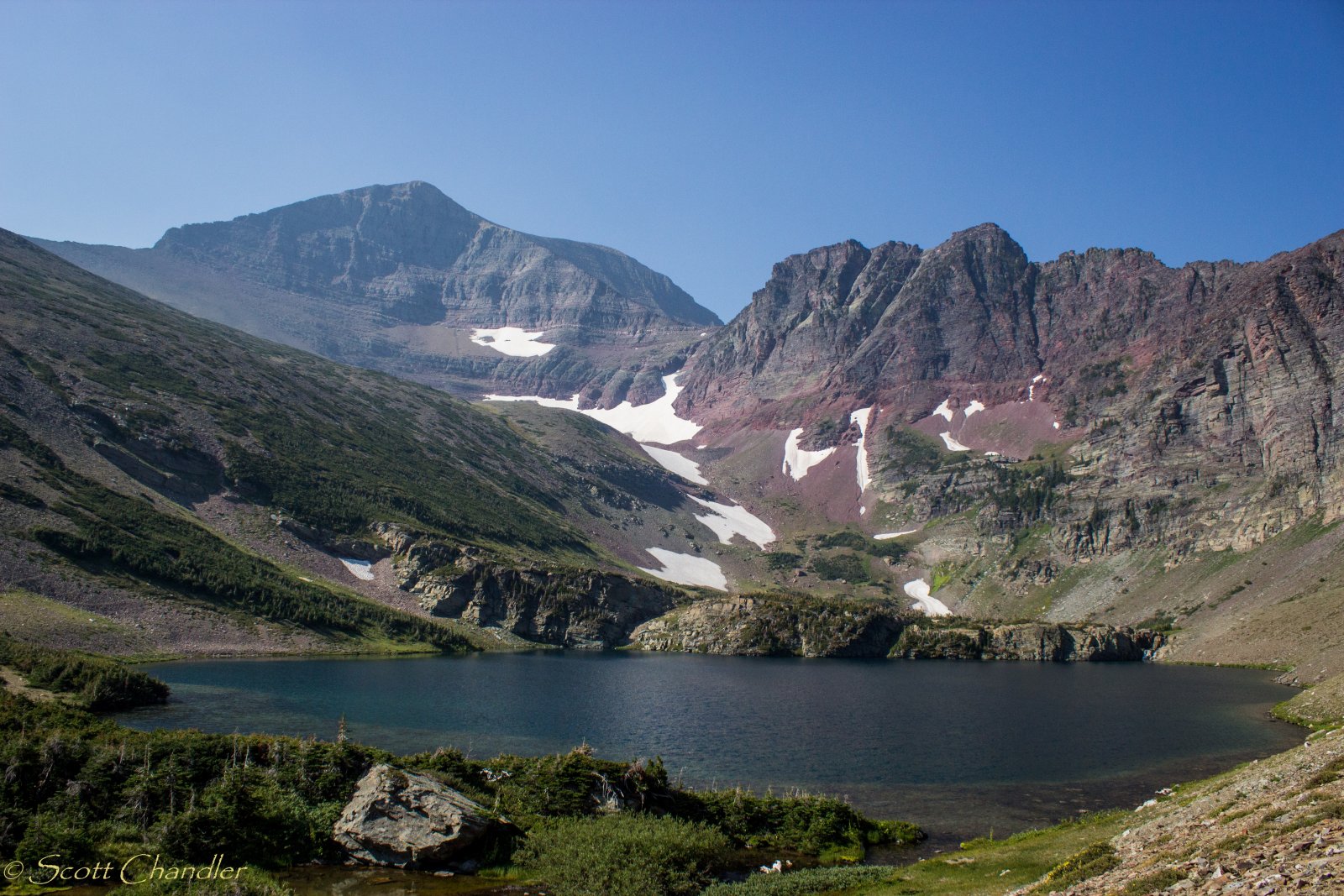 What really struck me about this lake basin back when my dad and brother originally went there was how different it was from what seems typical in Glacier. At least as far as trailed lakes go, many in Glacier are surrounded by large trees or in barren glacier basins, while this one is surrounded by tiny krummholtz. It reminded me more of the Bighorn Mountains landscape I was working in at the time. It is a serene and beautiful spot. I'm sure Glacier has plenty of lakes in basins like this, but this is the first like it I've been to, making it special. Walking along the lake we spotted some color by the lake, resulting in a photographic escapade that made us pause the journey to Snow Moon Lake. 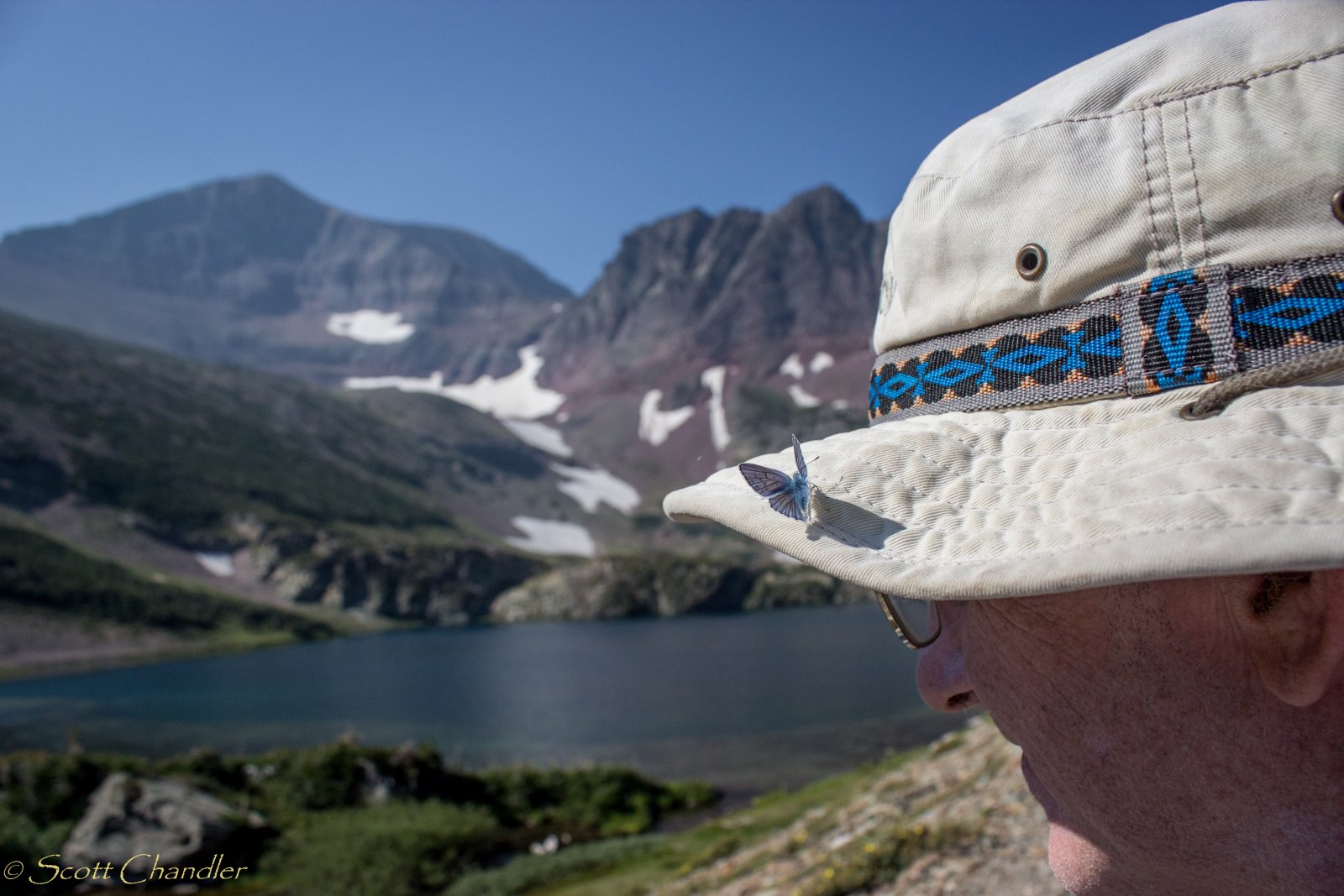 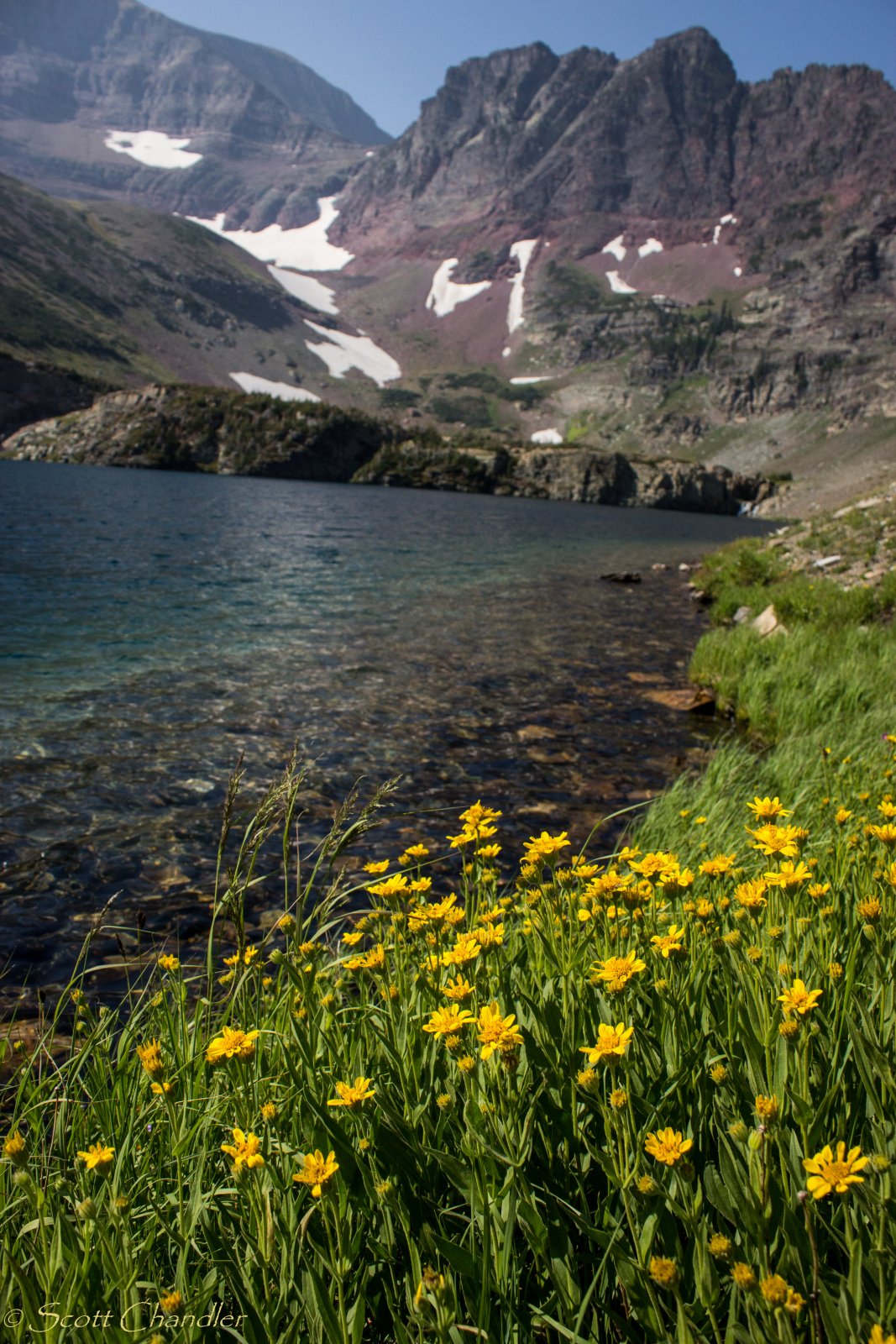 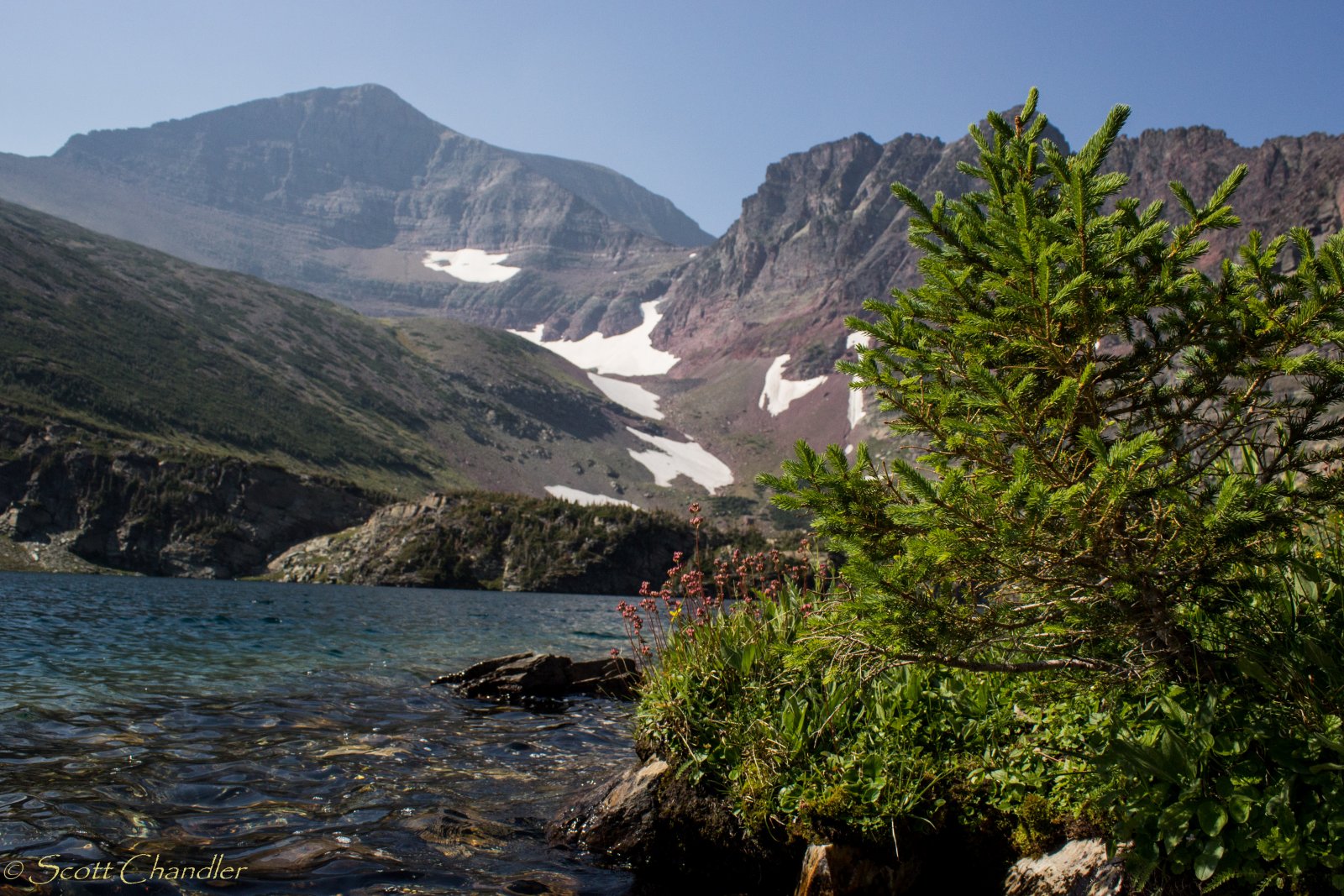 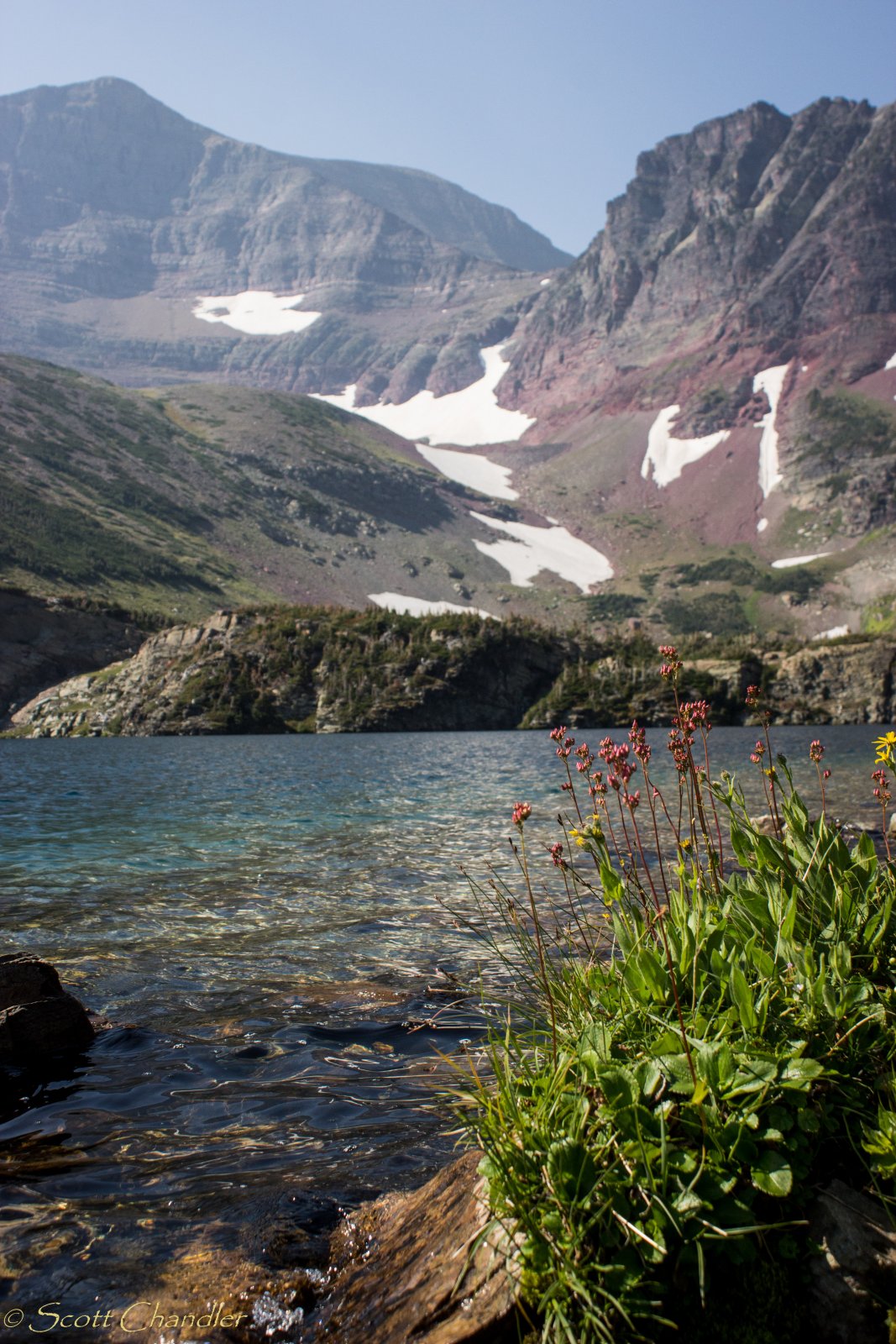 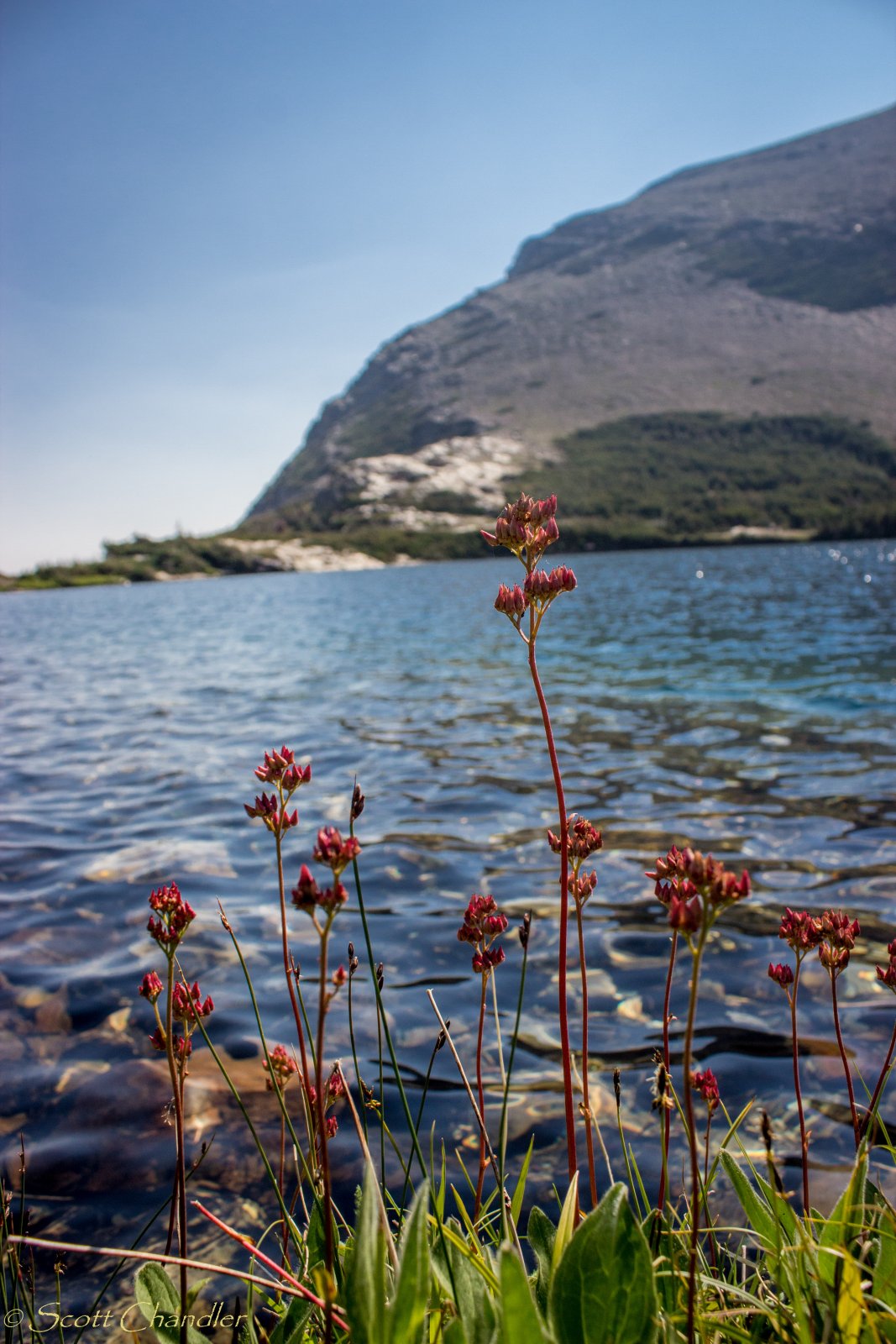 The end of the basin has a nice cascade of waterfalls that are a bit out of the way. With the scree, it is a challenge to work up the resolve go for the waterfall. This is not the case between Falling Leaf and Snow Moon Lakes though! We had fun checking it out. 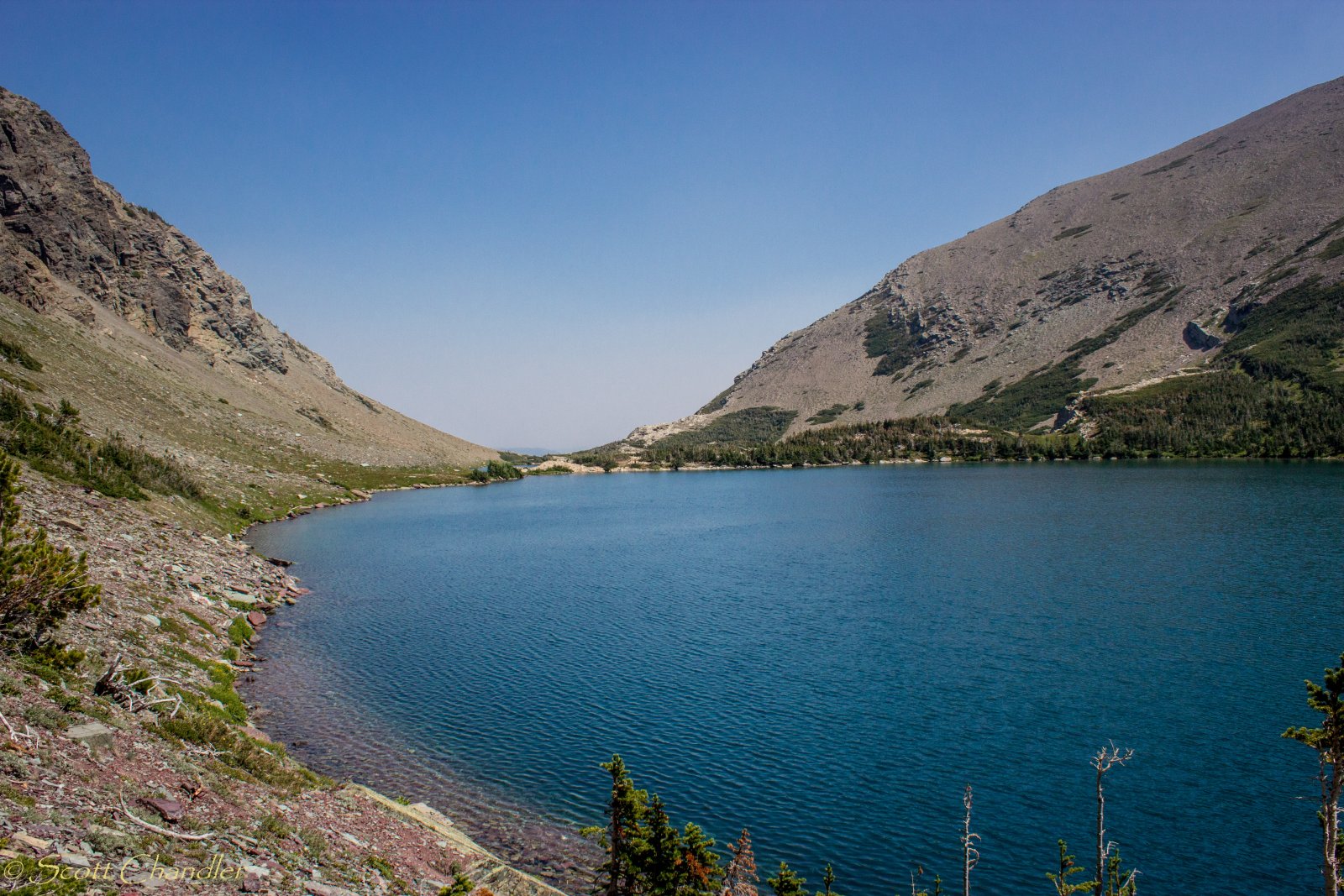 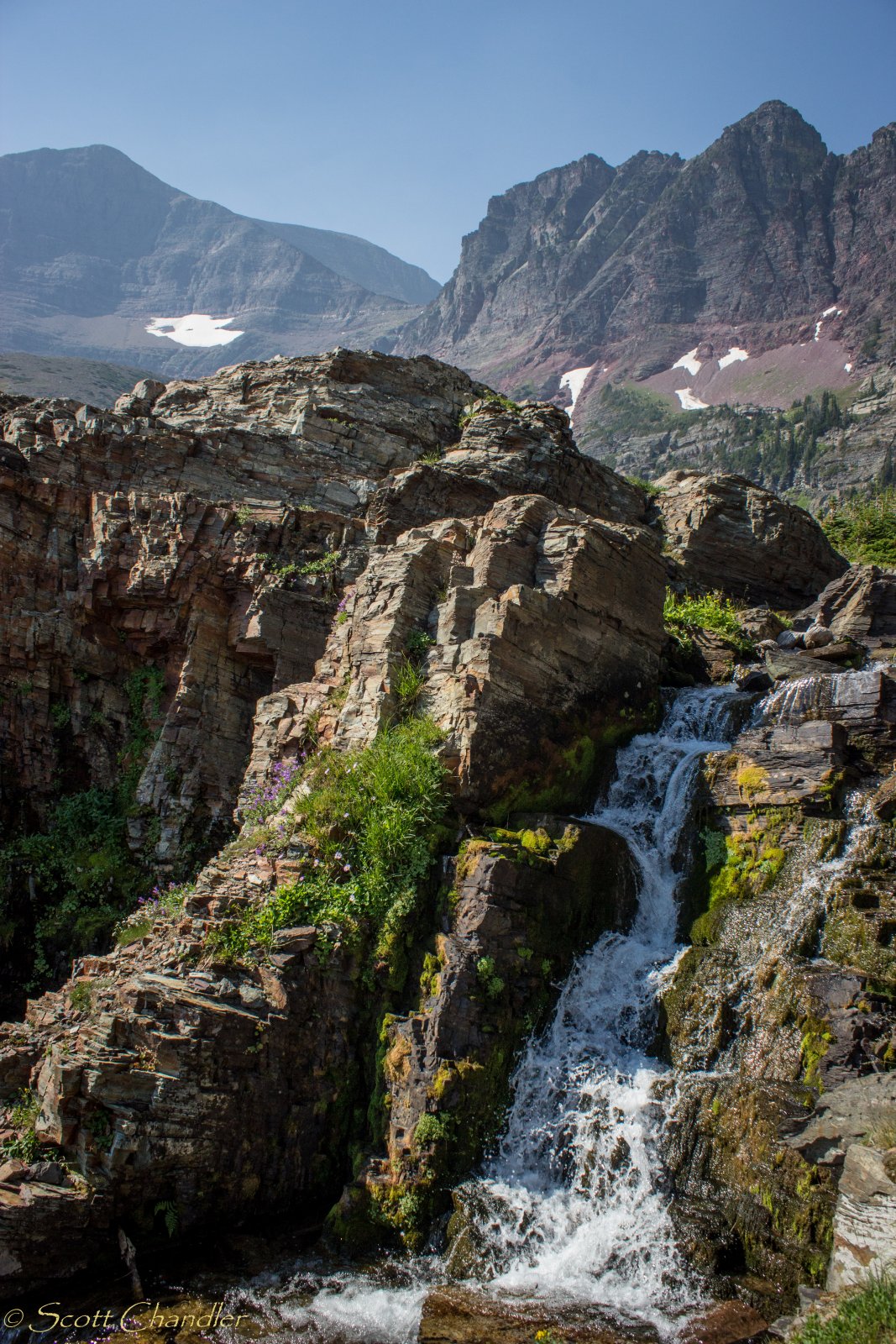 After lunching at Snow Moon, we decided to go around the lake. When dad and Jeff came back here a few years ago, they had gone up the eastern slope to look down on Cracker Lake a few thousand feet below. On the way back dad had wanted to go around the lake, but the trip up the slope was a bit strenuous so they didn't get around to that. We did today though! It was nice, some great flowers, ripply rocks, krummholtz, water seeping out of the ground to fill the lake. 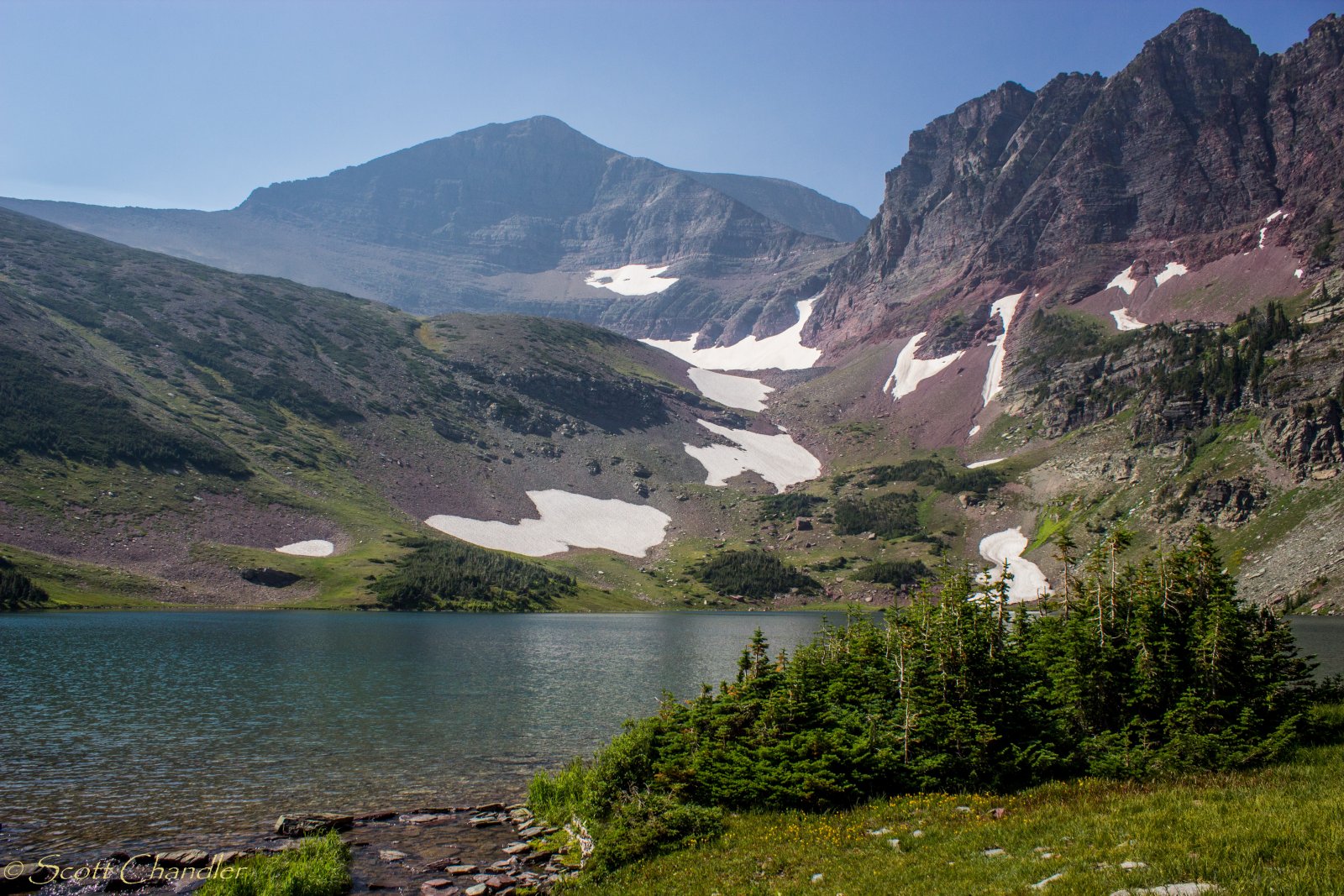 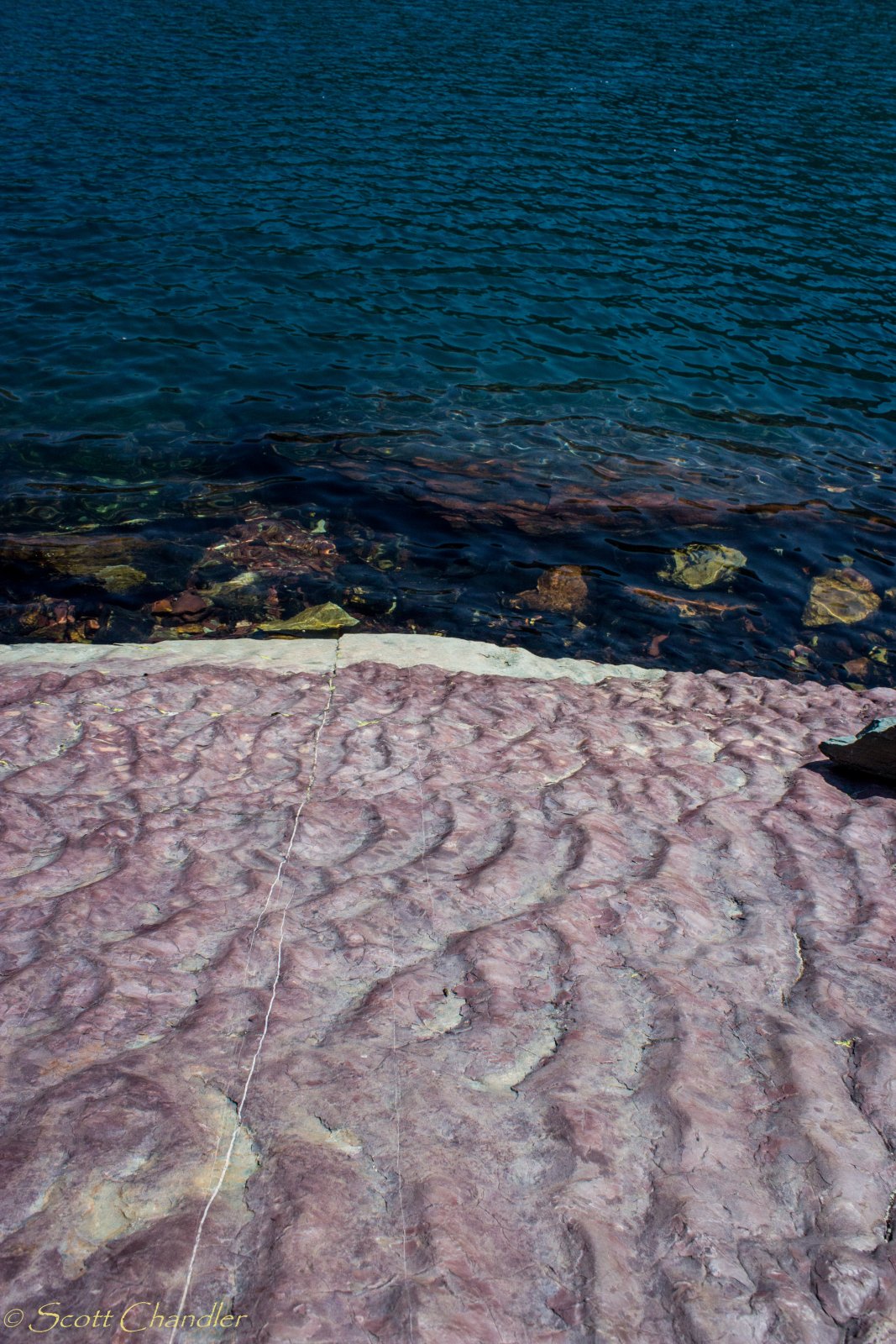 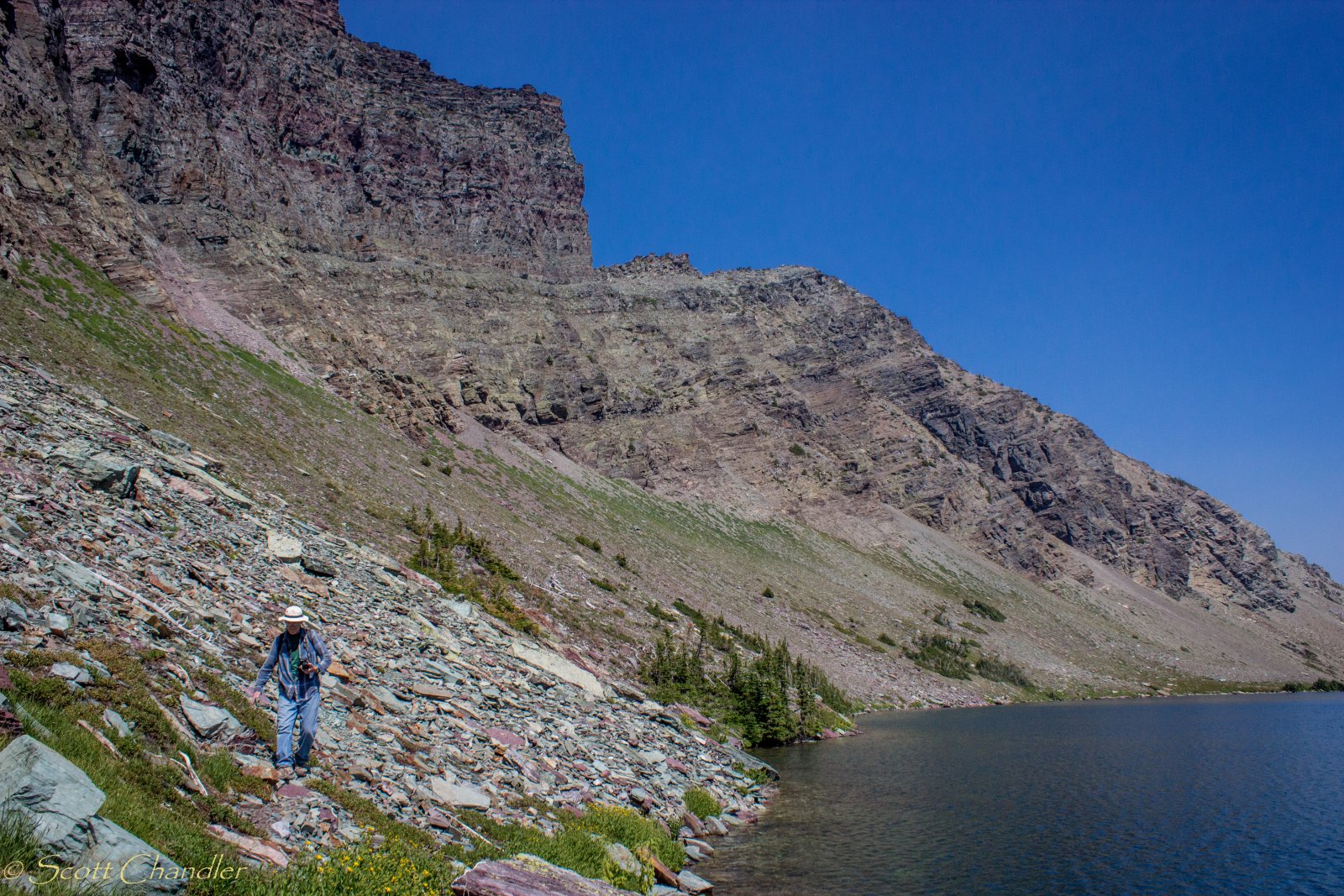 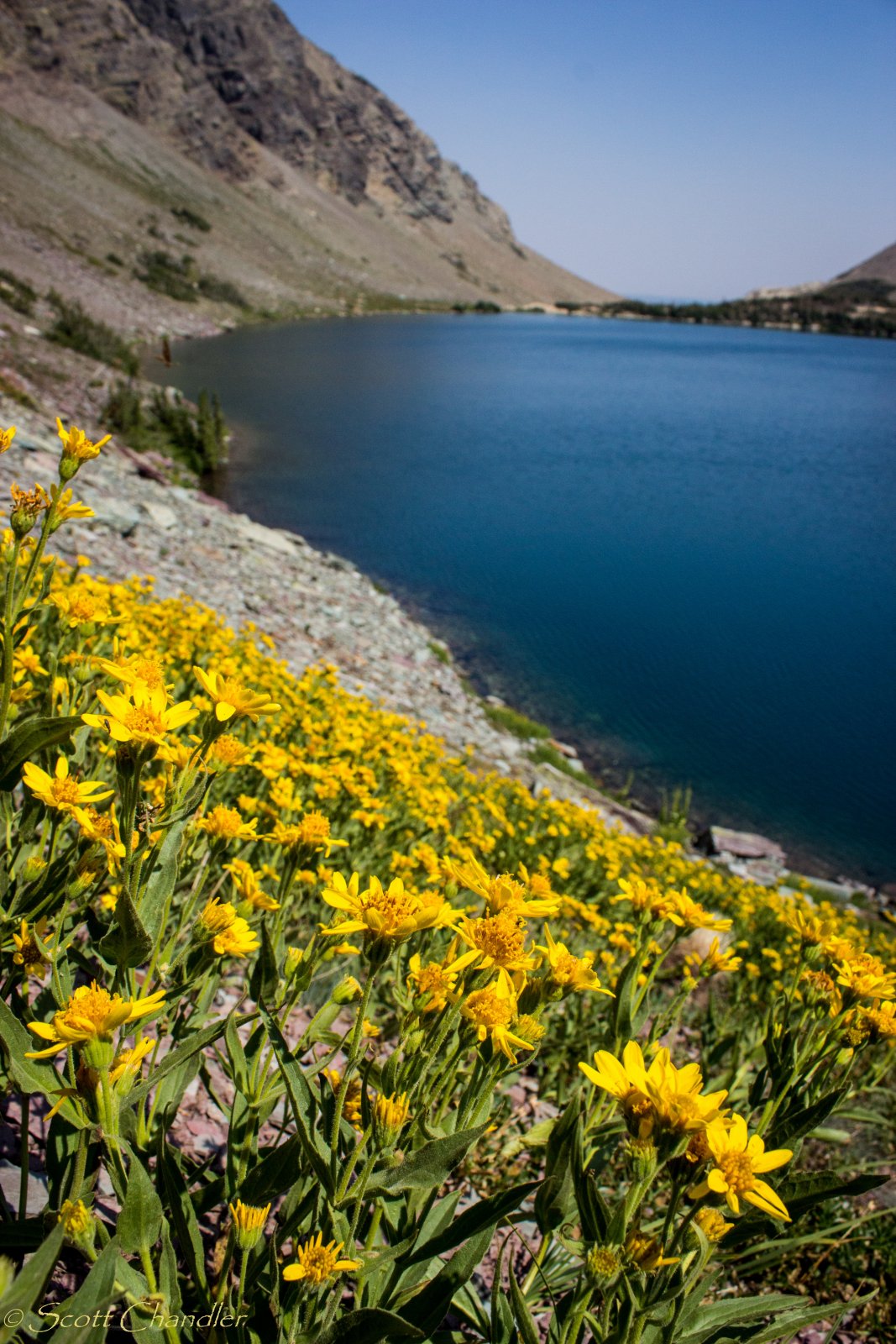 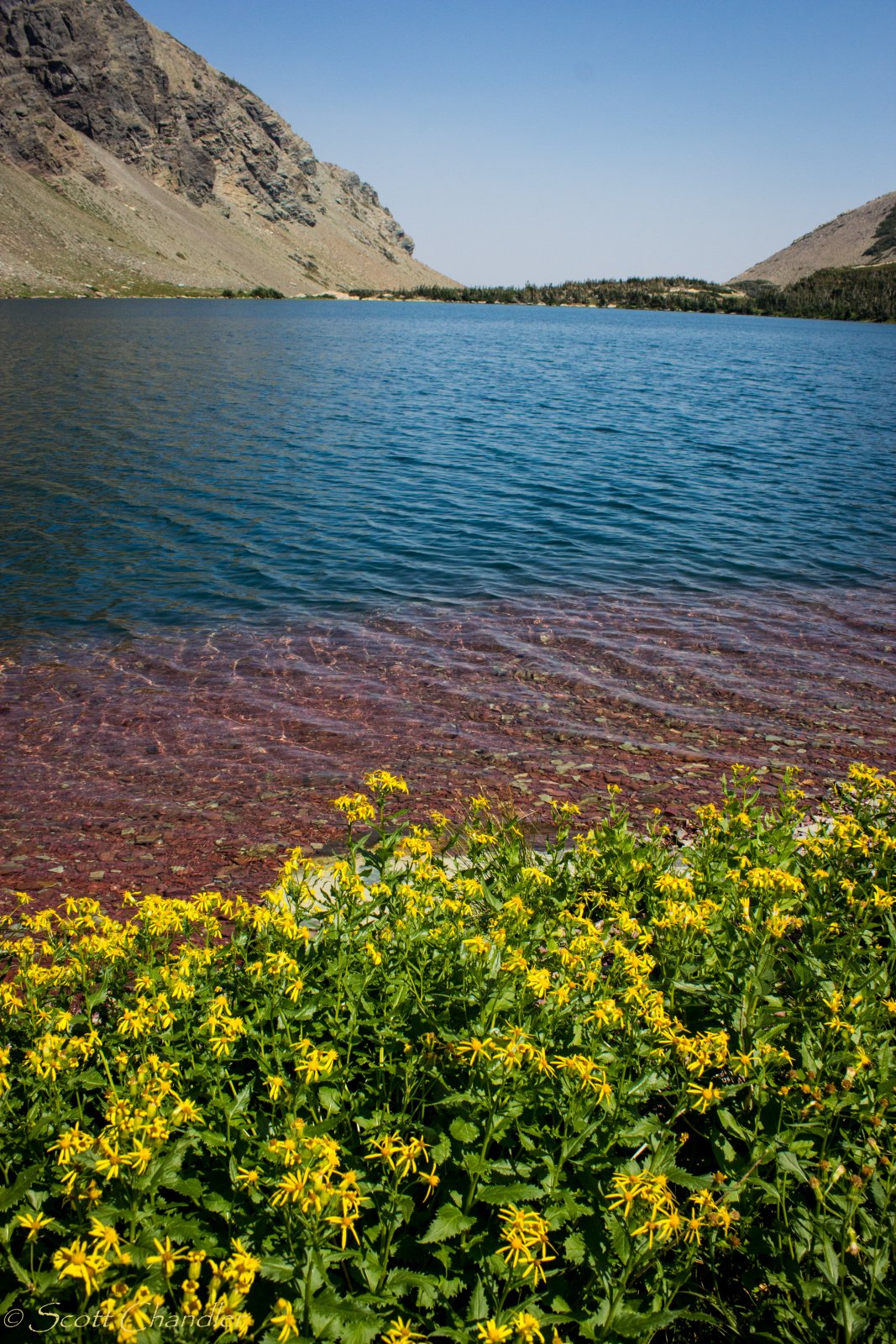 After a good bit of easy time having a wilderness experience in Glacier National Park, we started the trip back. This practically turned into a collage of "epic @chandlerwest" shots to catch the scale and perspective of the journey. I had fun with it, twas a nice distraction from the freakiness factor. 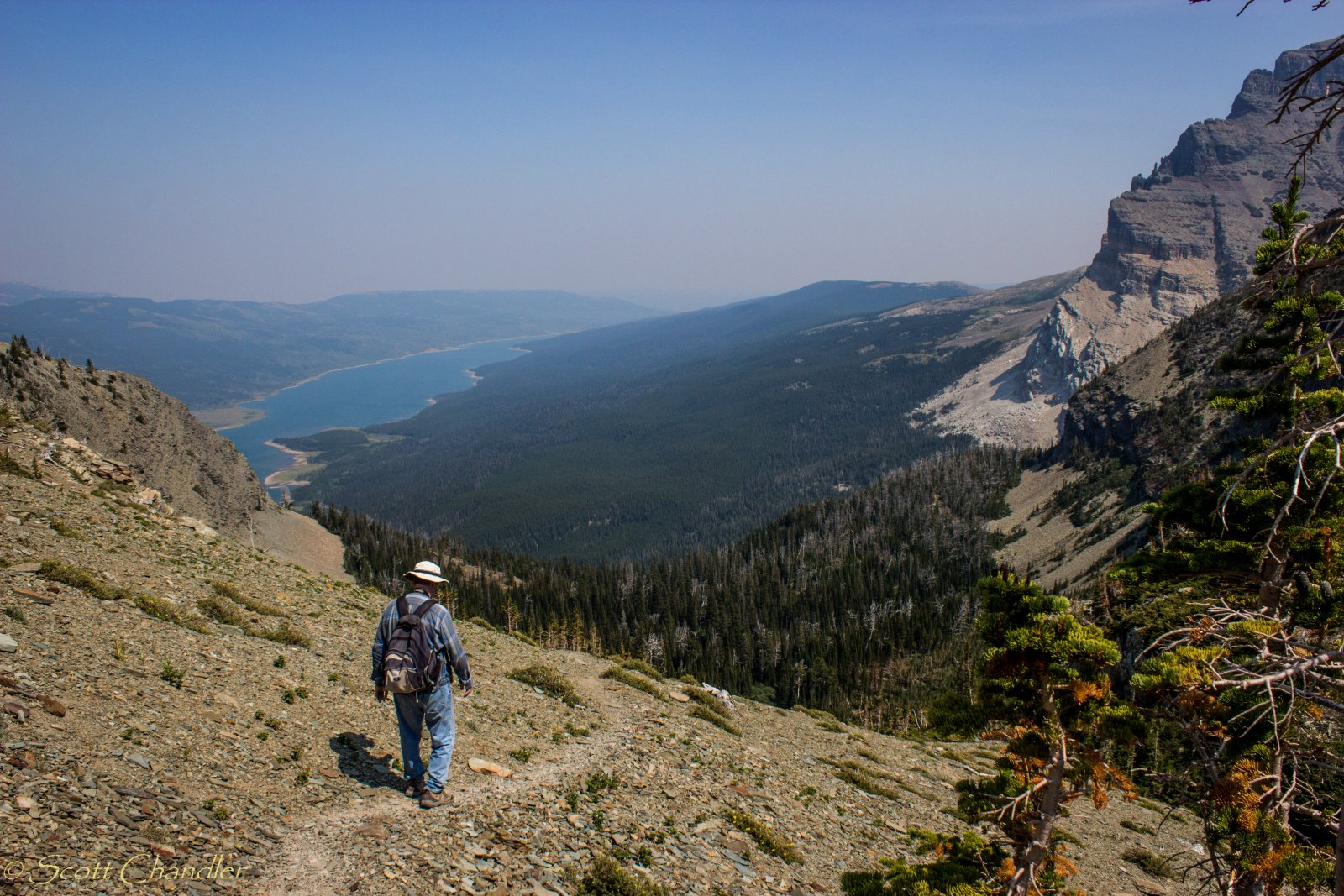 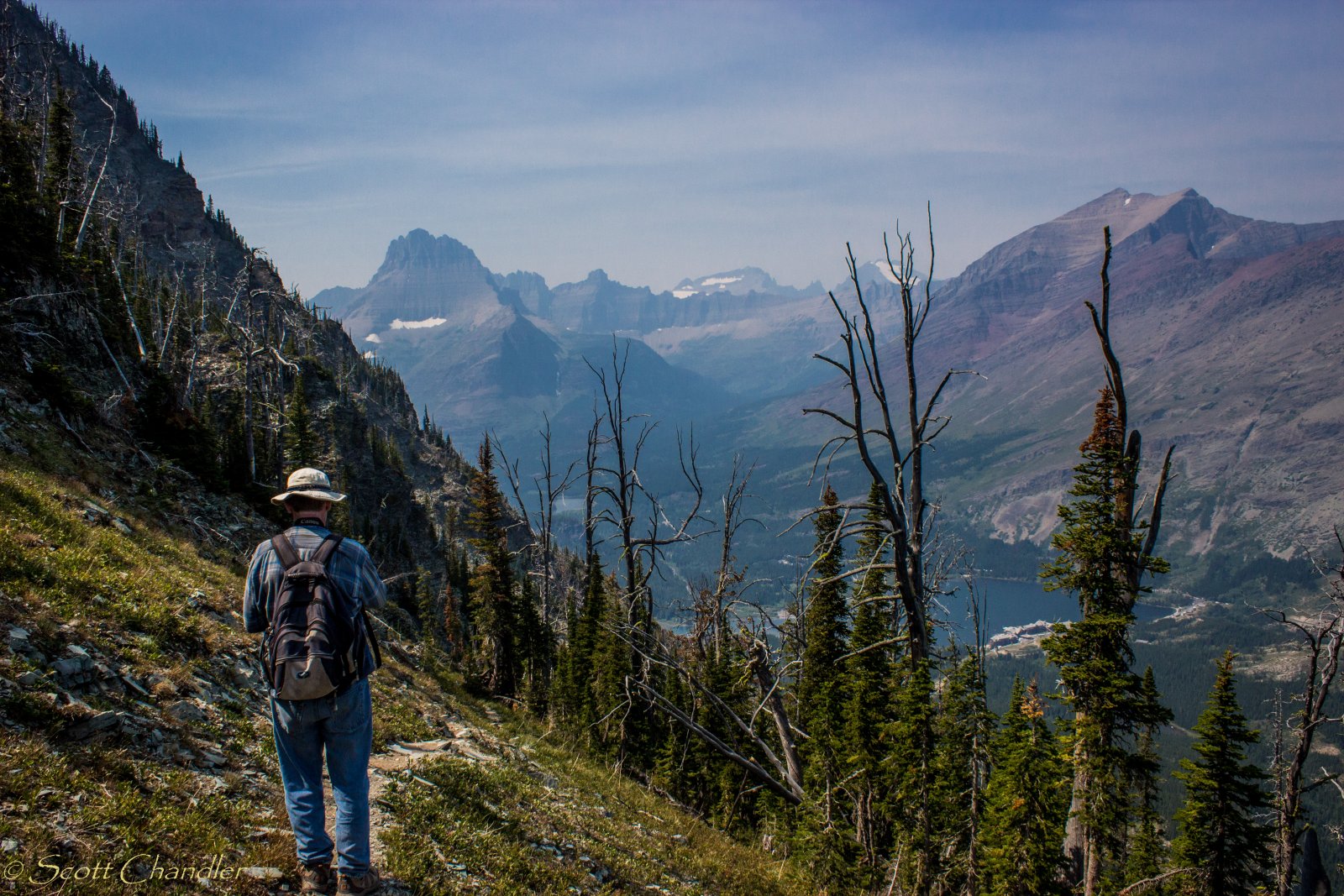 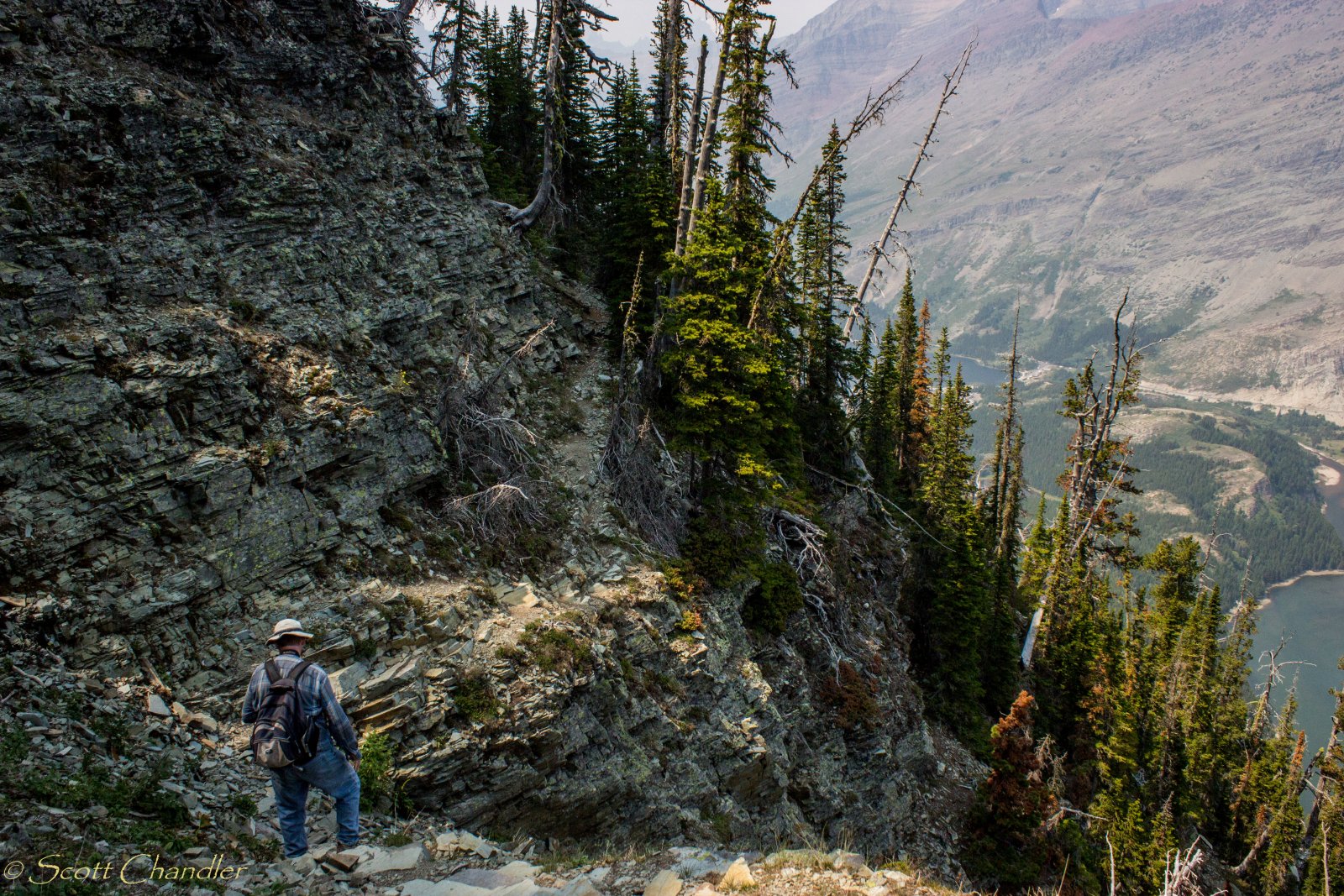 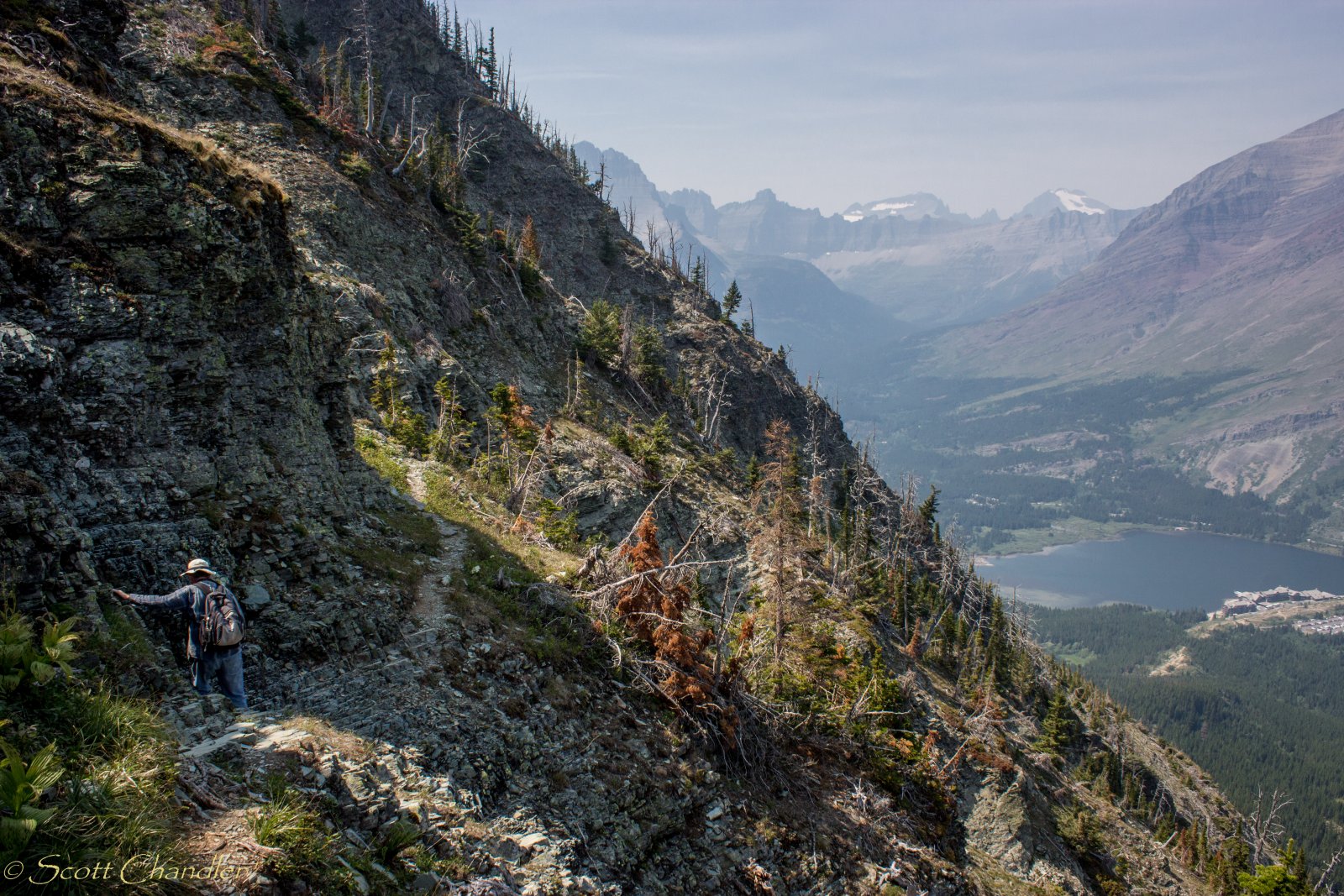 Dad has gotten his two sons in this spot, so we got him there too. Makes for an epic picture. I'm fairly sure it never crossed his mind while working at that hotel during the 80's that he would ever be up above this valley. 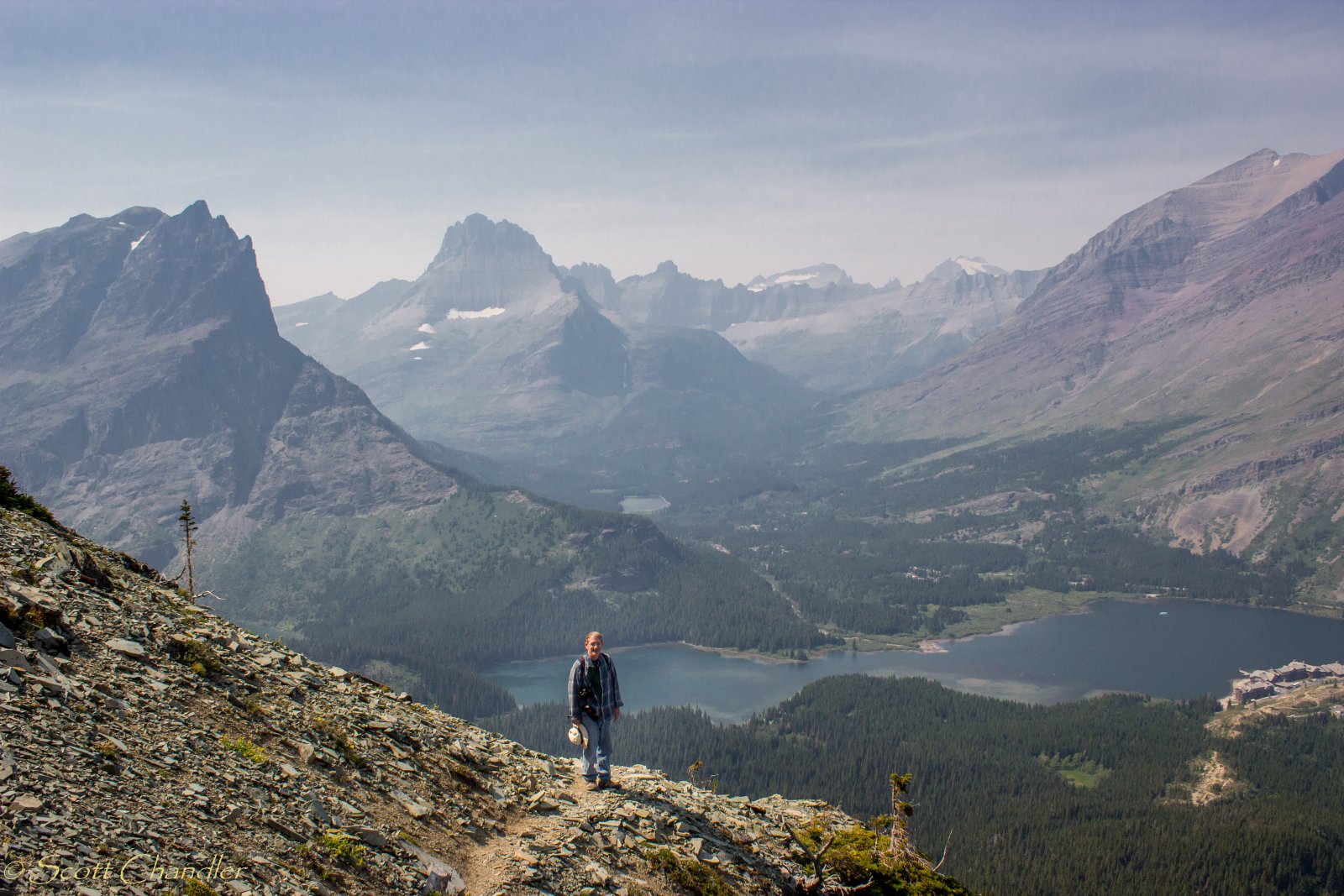 Before long we were back at the top of the scree slope. It was far more fun to go down than up. Two steps down and it slides an extra step. The slopes below were similarly nice. It wasn't long before we were at the bottom, back in the car and heading back to the time share. 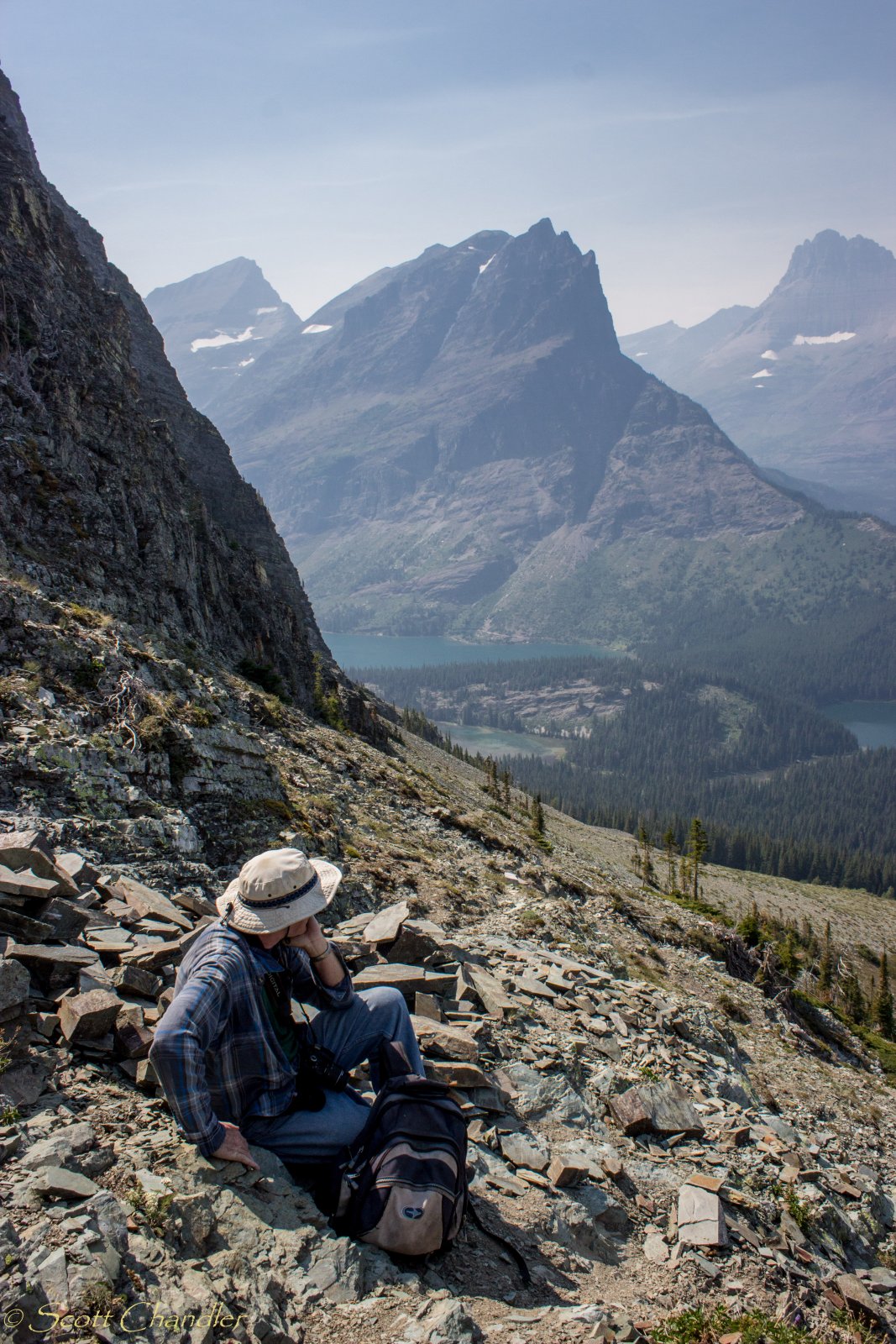 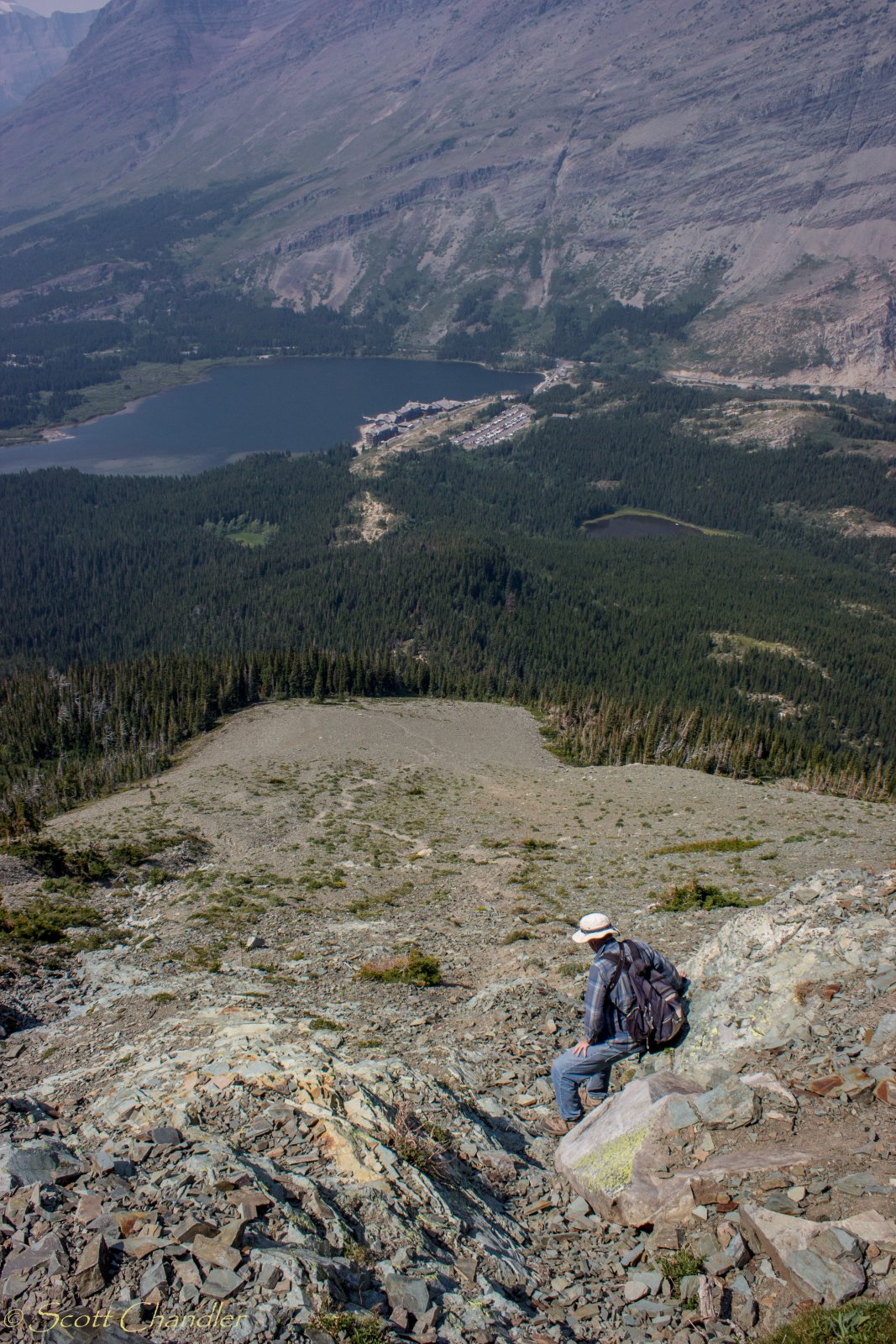 And thus marks the end of my adventures. The legs being done, Jeff and I elected to see a special presentation about amphibian research happening in the park while dad explored up Lunch Creek on our final day up at the Crown of the Continent. It was a total blast to come back and see this amazing landscape. Simply magical.

love it!!!
Glacier is still on my bucket list and hopefully one day I will have enough time to explore all these beautiful spots you've shown here so far
http://yvonnebaurphoto.smugmug.com/
You must log in or register to reply here.
Similar threads