What can I say, woke up to another beautiful day and it was going to be a big one. We had waited for this day for months. You hear about it, you read about it. Today we were going over Hurricane Pass but it was going to be a five+ mile hike before we started that climb. But it was a nice one. We got an early start from the canyon shelf and as we made our way up toward Mount Meek pass we seen a grizzly cub cross our trail not far ahead. Whoa! We put on the brakes and retreated back down the trail making lots of noise. We stood there awhile scanning the area for Momma. We noticed other hikers coming up the trail behind us. We waited for them and explained the situation and we then continued as a group of four. Fortunately we didn't have a close encounter. But unfortunately we didn’t see anything as we made our way through. With our faster pace we quickly moved ahead of the other couple towards the pass. It was a short steep climb over the top till we were finally overlooking the amazing area of Alaska basin. 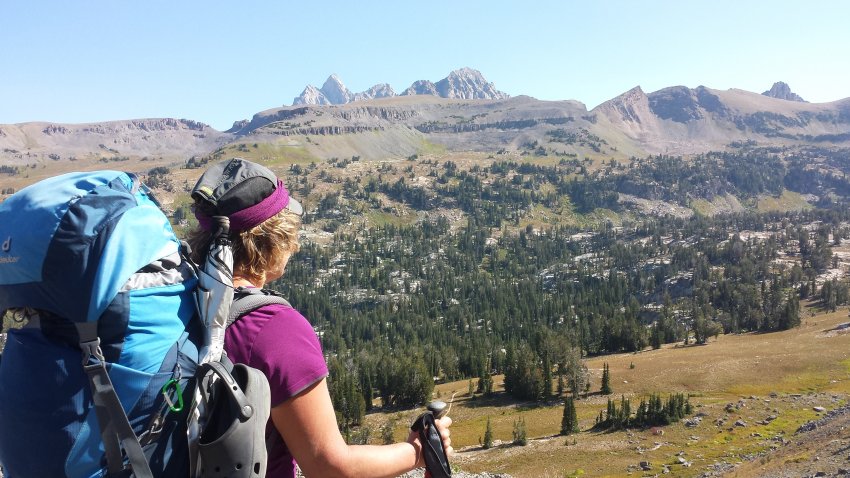 From up high we could see a smattering of small lakes below and could see far down the basin to the ranches and farms many miles away. To the right was Buck Mountain and Veiled Peak and straight across was giant Battleship Mountain that really looks like a battleship 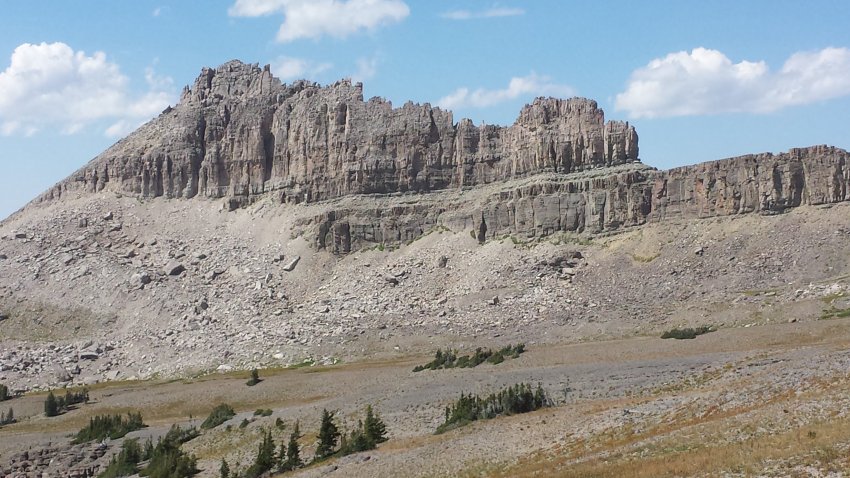 and somewhere up there was Hurricane Pass. But first we had a long decent followed by a even longer hike across the basin past the Basin lakes and finally up to the beautiful Sunset lake 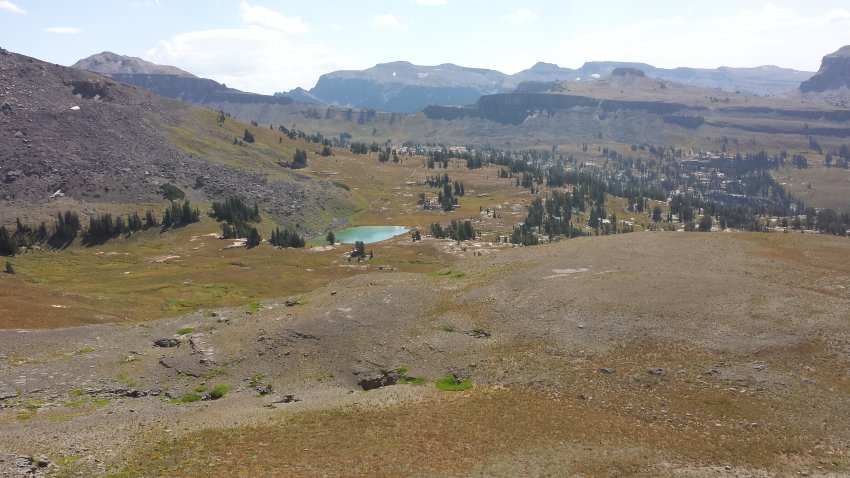 were we took a short break before we started up again. Hurricane Pass didn't disappoint. As you make your way over the top the the big mountains of the Teton's which a couple of days ago seemed far off are now "in your face " HUGE ! 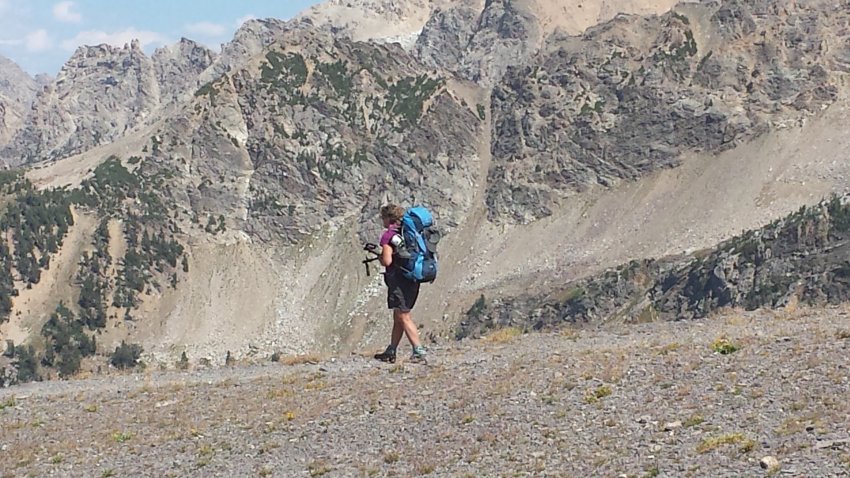 As the South Fork Cascade Canyon lays far below us at their base. What an incredible sight and feeling to be in this spot on earth. We are so lucky, we keep telling each other. It's a place you never want to leave because you don't know if you will ever make it back. 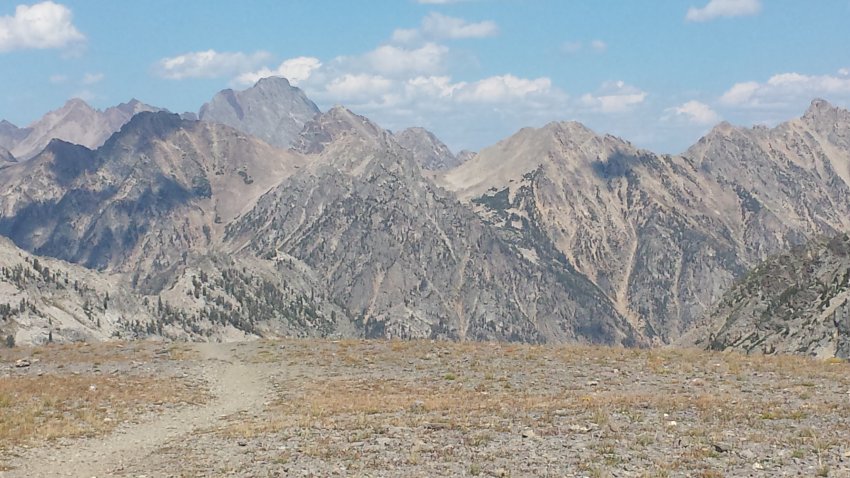 It was plenty windy on Hurricane Pass, hence the name, so we made our way down a bit to get out of the wind and enjoyed lunch in this beautiful spot. 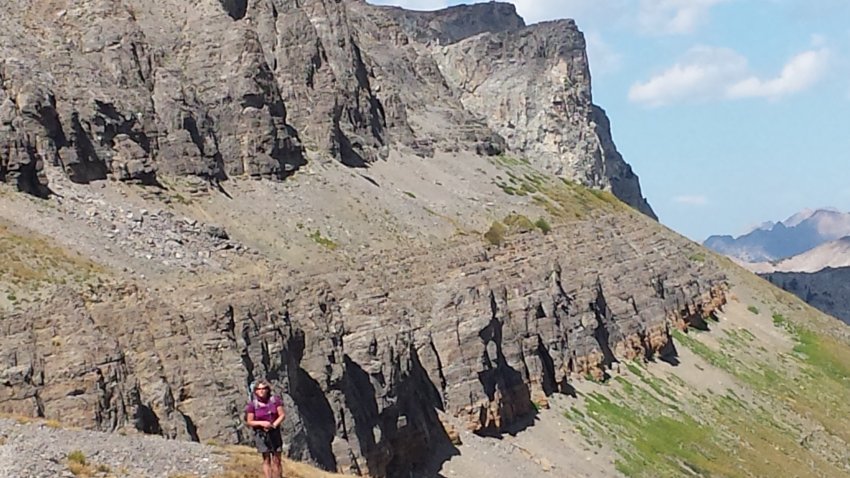 We eventually made our way down past Schoolroom Glacier 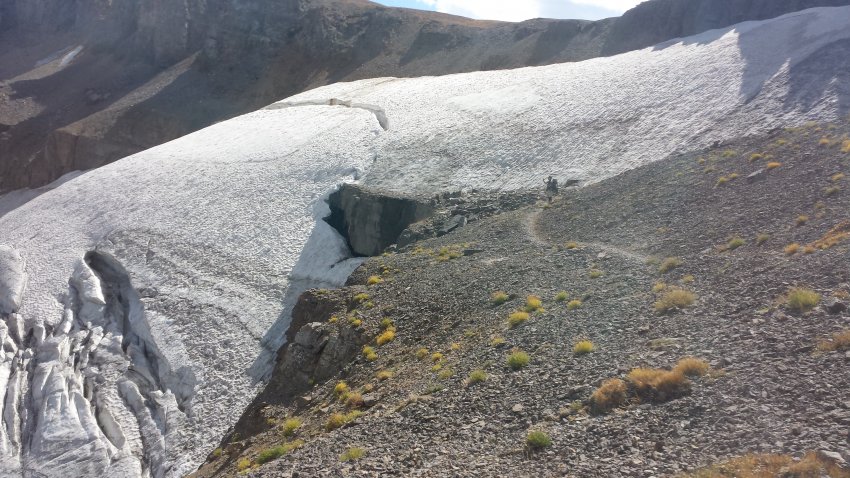 and set up camp by the gurgling stream that flows from it, high on a rock ledge. We were beat, We probably hiked 8+ miles today over two mountain passes but we weren't done yet. We fueled up with water and snacks and decided to try for the Avalanche Divide 1.6 miles away, straight up of course, but it was worth it with magnificent views in all directions, 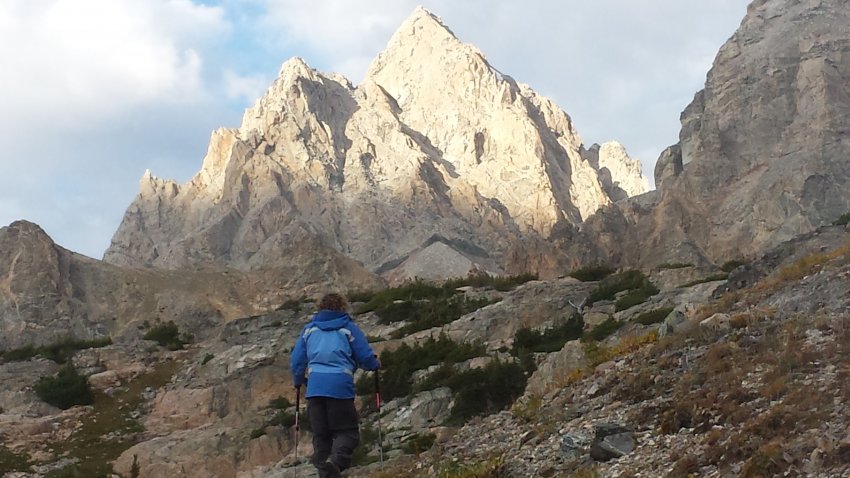 I can't name all the peaks that were visible as we stood way up high again for the third time today. 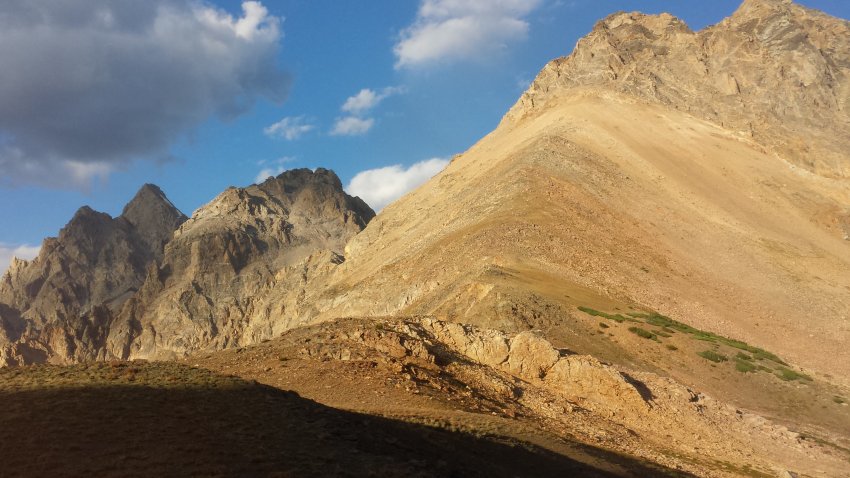 It was getting late in the evening as we started back down to camp and with the sun disappearing behind the mountains, it was getting kinda dark as we staggered into camp. What an awesome day! Sleep came easy tonight. 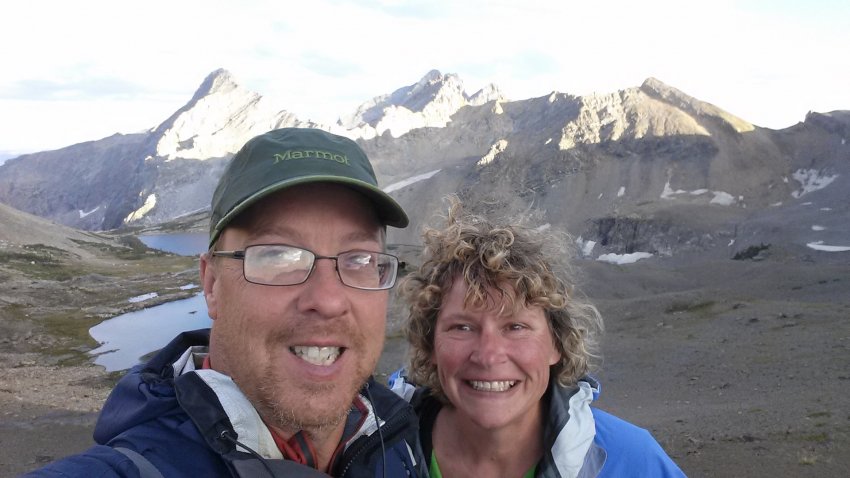 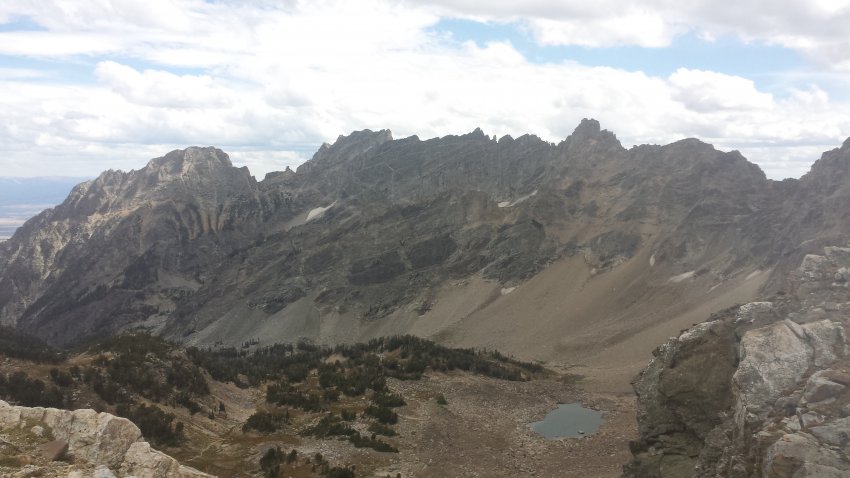 albeit a little breezy. We had to get down off our ledge and behind some boulders to fire up the stove for coffee. No big hurry today. We were headed up to North Fork Cascade Canyon. 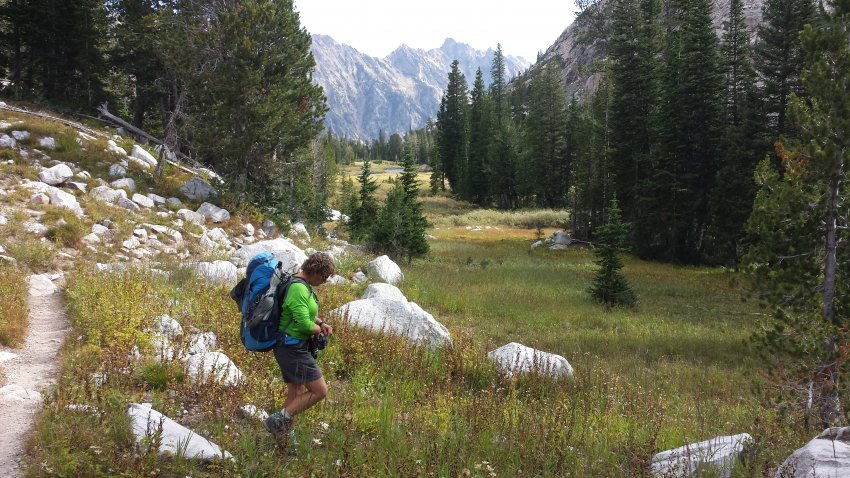 But it was all down for the first half of the day followed by a constant up for the last half. But all of it was incredible as we were now walking in the shadows of the tallest peaks on this day. 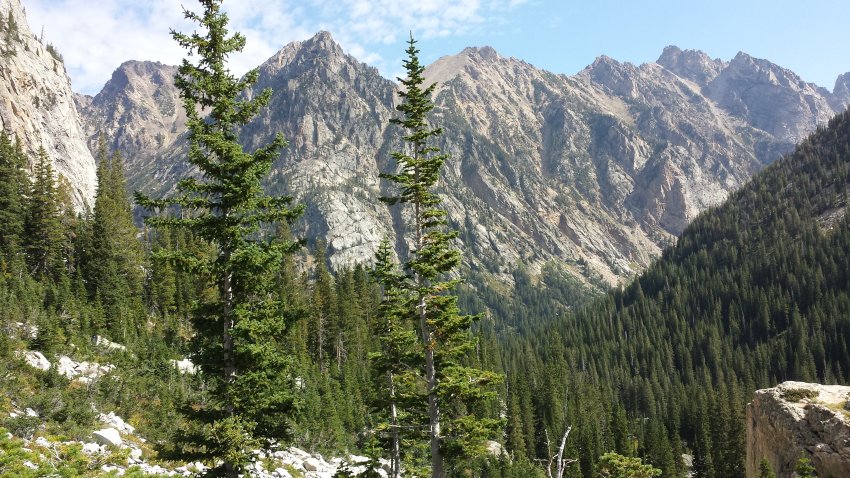 As we made our way down , we walked along a once small stream that continued to grow larger and louder as it crashed downhill. With plenty of beautiful little waterfall vistas sprinkled along the way. 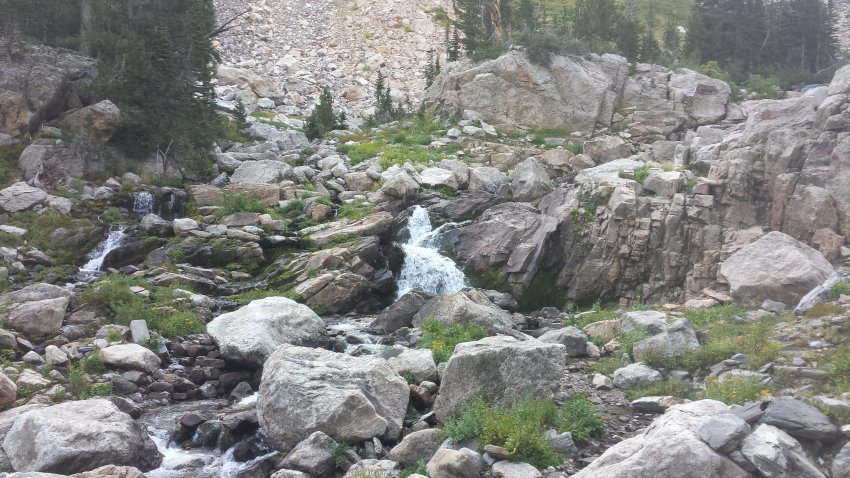 We did start to see more people today as we got closer to where the trail split. But once we started back up, we left the day hikers in our dust. We found a great campsite with rocky waterfall and a bear box, but we knew there were more ahead so after a late lunch break we continued up and up and we did find some other great spots but none as nice as the first so we backtracked to it. 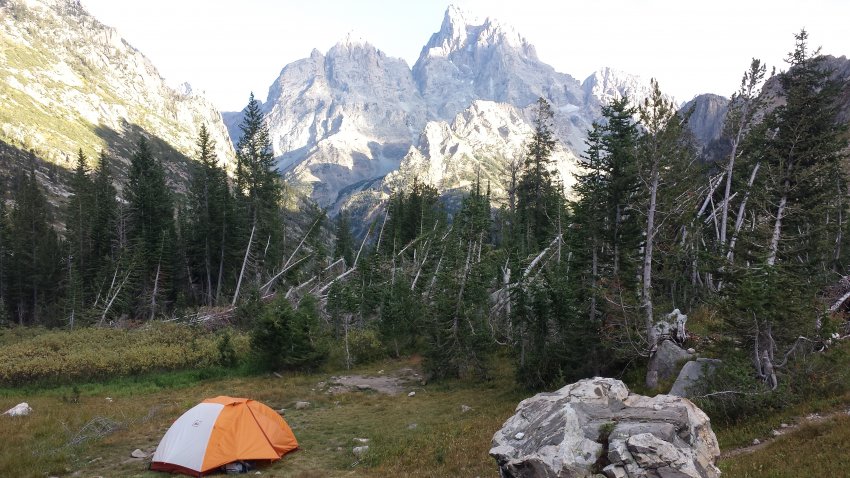 With great views in every direction, great water source and a level grassy tent pad it was 5 star all the way. Our slow start and our backtracking cost us some daylight hours but after dinner we still had time to hike up to Lake Solitude. We had read that "don't expect solitude at Lake Solitude " but being it was so late in the day, we had the lake to ourselves. 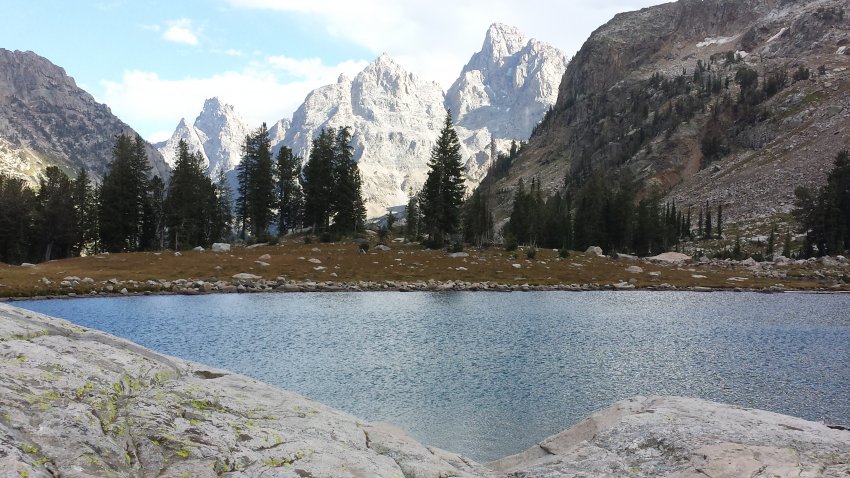 Awesome! I hadn't had much luck fishing in the Teton's yet so I left my fishing equipment in camp. .Big mistake. There were fish surfacing everywhere. We would be back this way the next day so I could try it then. It was so quiet and beautiful, we hung around the lake till almost dark then made our way back to camp. 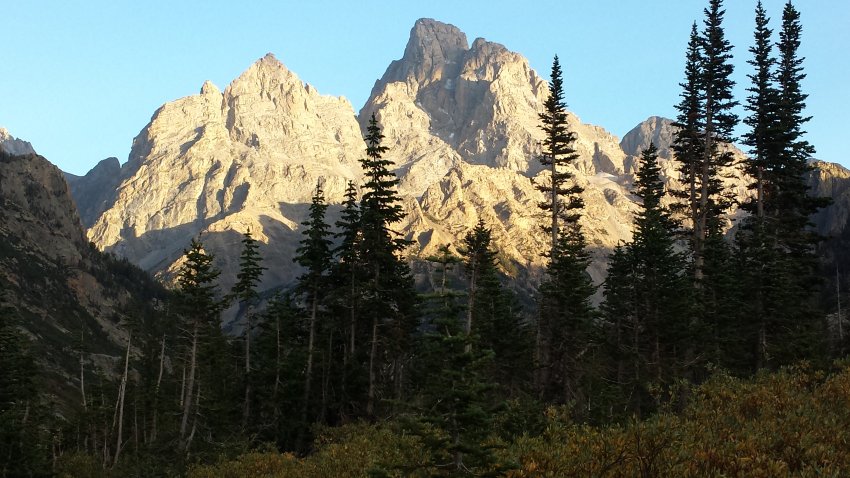 8It had been another great day and we had a rushing waterfall to lull us to sleep tonight.

Looks like a nice trip with good weather......kinda rare this year in spots.
' Not All Who Wander Are Lost '

Loving these reports and can't wait to see the rest. One thing you wrote resonated with me.. that you didn't want to leave because you didn't know if you'd ever be back. That's an emotion I feel at times on almost every trip and it was comforting to hear someone else say it, so I know I'm normal. Excellent stuff IRG!

Vegan.Hiker said:
Loving these reports and can't wait to see the rest. One thing you wrote resonated with me.. that you didn't want to leave because you didn't know if you'd ever be back. That's an emotion I feel at times on almost every trip and it was comforting to hear someone else say it, so I know I'm normal. Excellent stuff IRG!
Click to expand...

Right On!
Vegan Hiker your totally normal.
Thanks for response
Cheers
IRG

Bob said:
Looks like a nice trip with good weather......kinda rare this year in spots.
Click to expand...

Thanks Bob
Ya...we lucked out on weather for our two weeks in Wyoming.
Very thankful.
Cheers
IRG
You must log in or register to reply here.
Similar threads