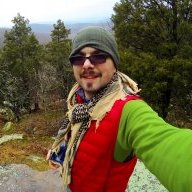 Decided I needed to get a bit of trail time in before the end of this year. We hired a new guy at work a few months back. It's been my job to train him so I wasn't able to take my normal late fall camping trip. I've decided to make up for it by getting out next week right after Christmas for few days. I picked a trail pretty close to my house. I've done the very beginning of this trail last year and thought it would be nice to tackle a bit more of it.
It's called the Tecumseh, it's the second longest trail here in Indiana. (That's not really saying much, it's overall length is about 45 miles.) Figure I'll get about 30 miles of it done in three days. No plan to move too fast.
I even bought a new zero degree bag for the trip, but sadly if the weather doesn't cooperate I'll be taking one of my warmer bags along. I really hope some snow stays on the ground. The snow makes pictures look so much better, otherwise it's just cold and dead.
Last year when I tackled this trip I ran into two priests and a Catholic dog.
Will report back more when I get back.

Dang snow storm! This trip got cancelled due to bad weather. This would have required my wife and I to drive separate cars. After car shuffle, my wife would have been driving back home with our boys. I didn't want to take the risk that she'd get stuck somewhere. This trip is still on my list though.
You must log in or register to reply here.
Similar threads