Well, today was the day I was going to start the 63+ mile hike from Summit Park to Provo I had been planning
all spring. I had gotten time off work in hopes that this would be a pleasant week for the trip. Not too hot, not too cold. Then that which shall not be named hit the area yesterday.

With all the unexpected snow, I opted to scout out the beginning of the route this morning. The snow is only a couple inches deep at the moment and the trip could still be doable, but some of the steeper sections of trail would be wet and slushy enough to make conditions just right for increased risk of slipping and twisting a knee the wrong way, especially with a 25lb pack, even with poles. It would probably only get worse up to Brighton before conditions got better.

If I knew that most of the snow would be melted out by the end of the day, I'd still give it a go. That would probably be the case if we had a full day of sun today, but with all the lingering clouds and lower temps hanging around, that likely won't happen.

I've got a couple weeks off in July, so it looks like I'll now be pushing this trip off until then and my wife will probably be able to join me for it. I need to ensure a trip to the Uintas during this time as well.

In the mean time, I'm now looking at driving up to Brighton early tomorrow morning to have a look, and will either have my wife drop me off there, or just have her drop me off at Grove Creek in Pleasant Grove a little later in the day so I can still get a couple bag nights in doing the latter sections of the route.

Here are a few pics I took while scouting the conditions of the route out of Summit Park this morning.

Toll Canyon with Murdock Peak in the distance...

Trail back up and over into Summit Park...

I feel like this could all fit on a "Wasatch Conditions" thread.

So, unfortunately, I didn't get any other nights in on the trail. Instead, I did what any good husband/dad would do and opted to just hang out with the wife and family.

On Thursday, I did take my wife, Jessica, back up Toll Canyon so we could see the snow damage. She was fully raised in Summit Park and had never hiked very far up Toll Canyon, so it was a first for her.

Here's a shot of the view into Snyderville from atop the ridge at the top of Toll and Lamb's Canyons. You can see the Uintas in the distance. 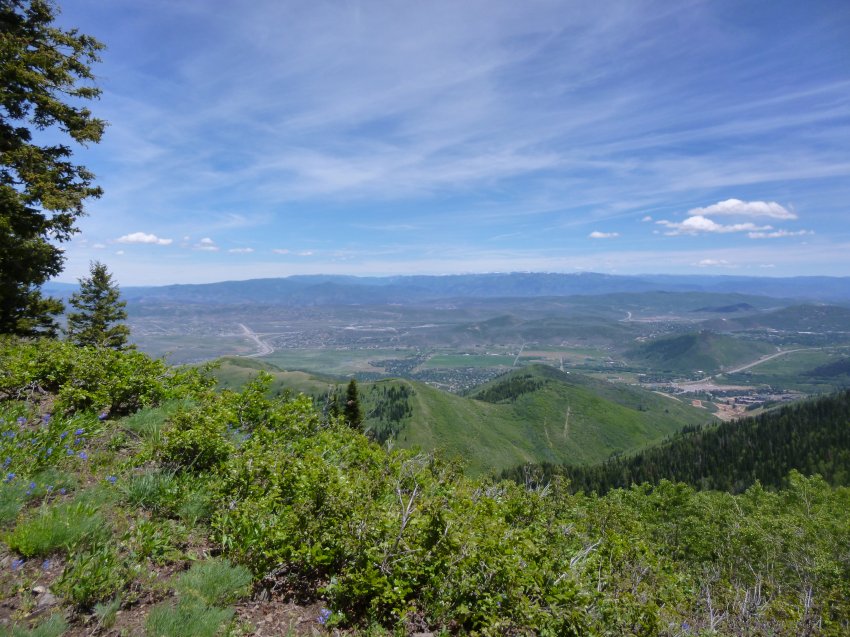 Heading back down into Lamb's below Murdock Peak. 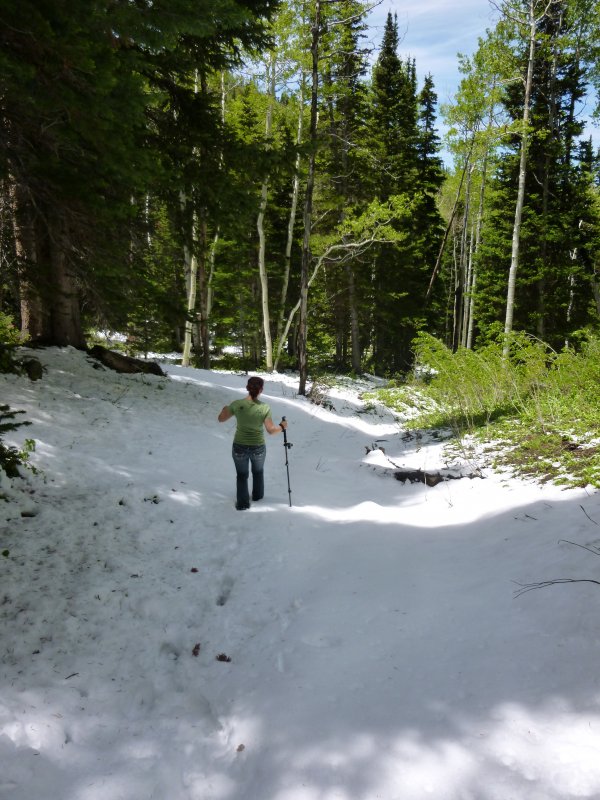 Here's some shots of some of the damage the late snow caused. Dozens of aspens snapped in half at the trunk, completely uprooted, or otherwise damaged, some even taking down some pines with them. It was quite sad to see actually. 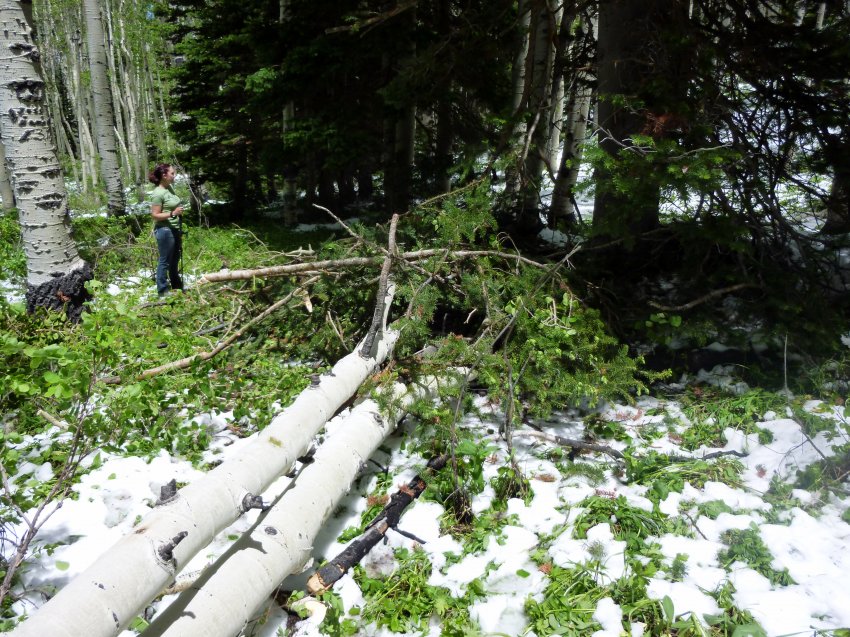 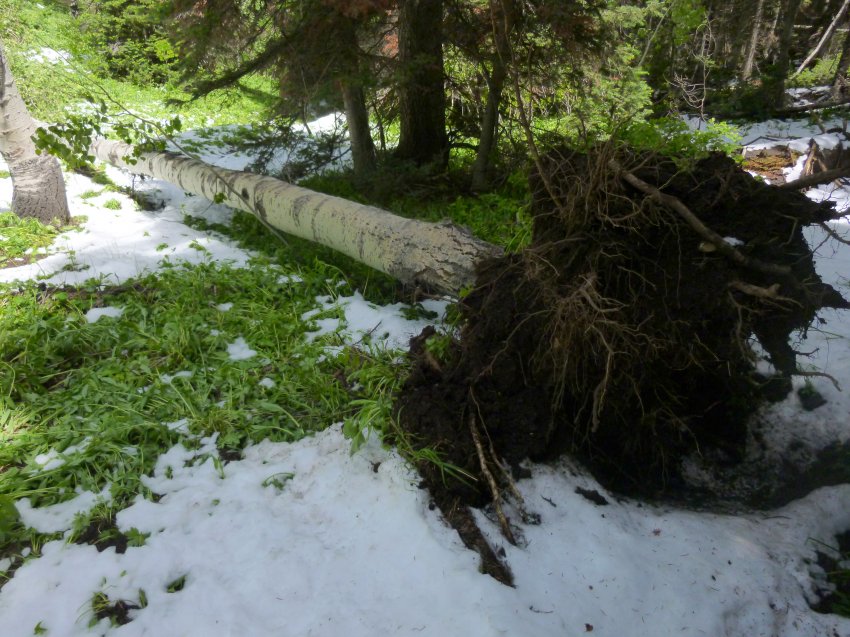 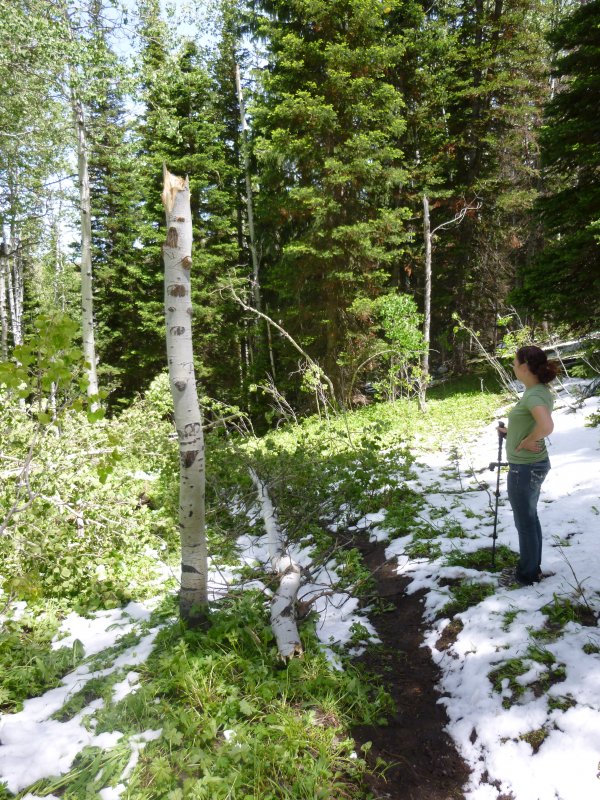 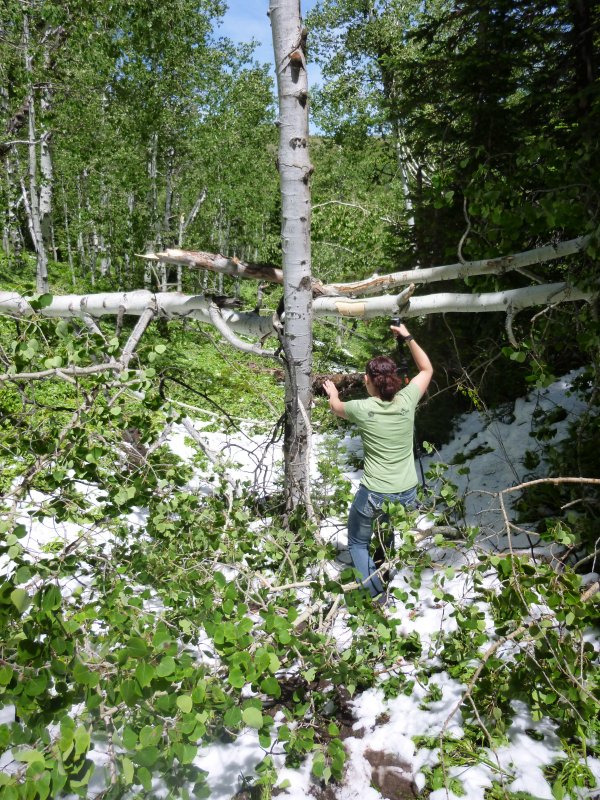 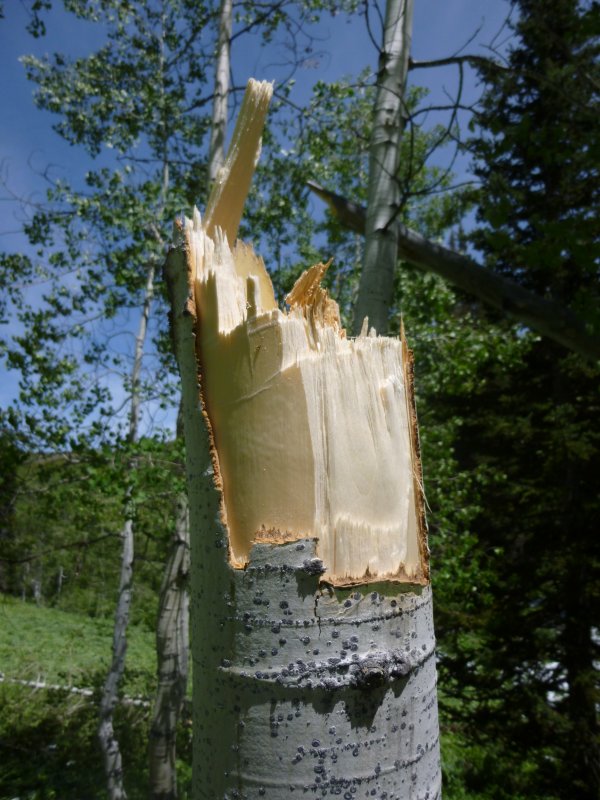 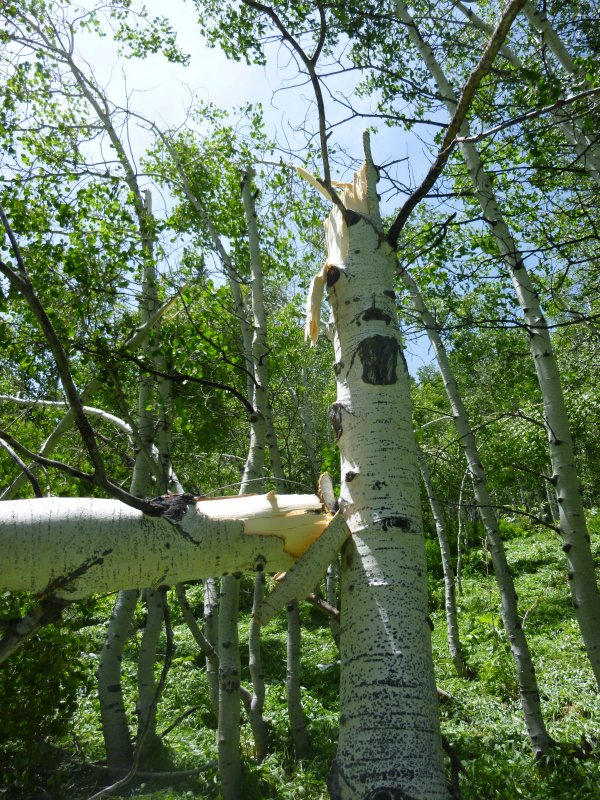 We cleared off as much of the debris from the trail as we could. Mostly just the smaller stuff. It may take some combination of an ax, hatchet, and saw to clear some of the bigger stuff off the trail.

Yesterday, we took the kids up to Lake Mary up BCC.

Of course, Dog Lake needed a visit on the way. 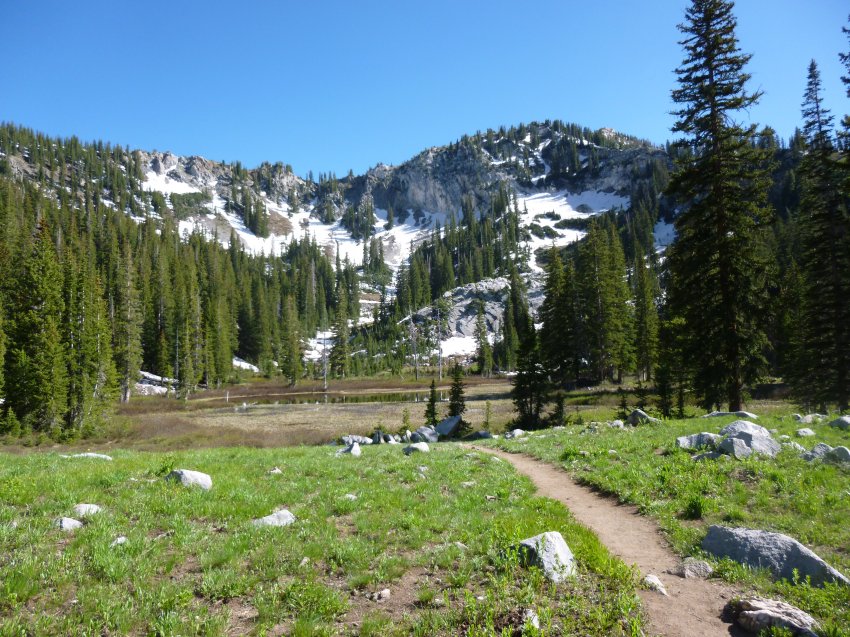 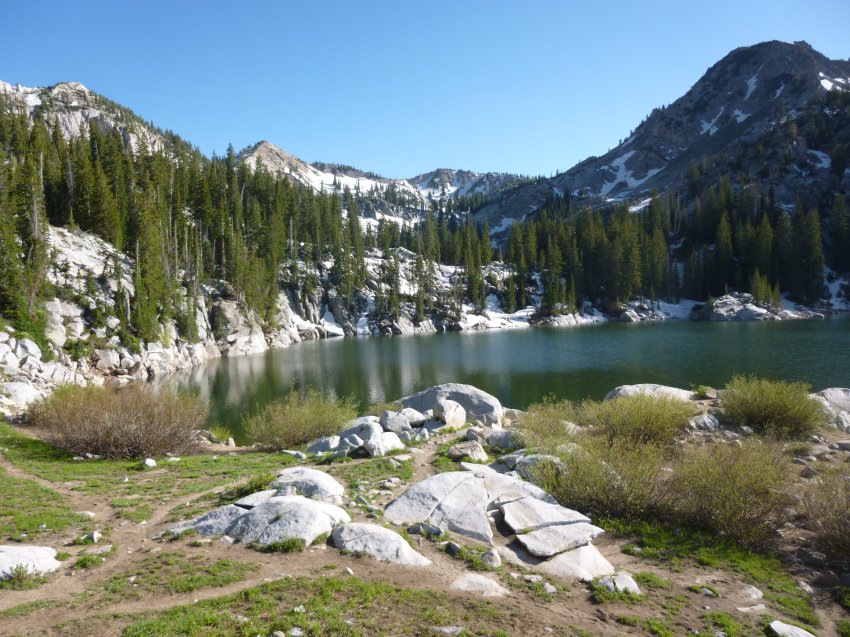 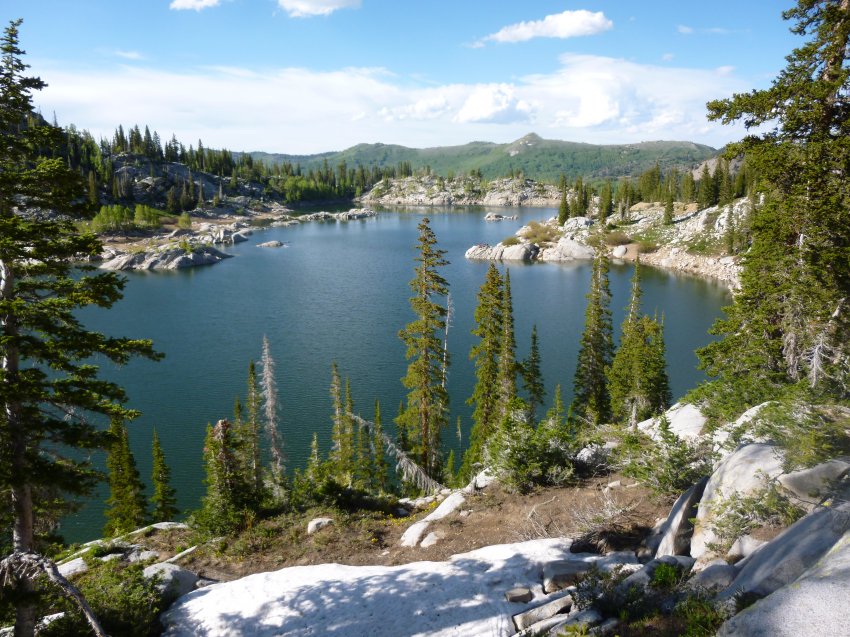 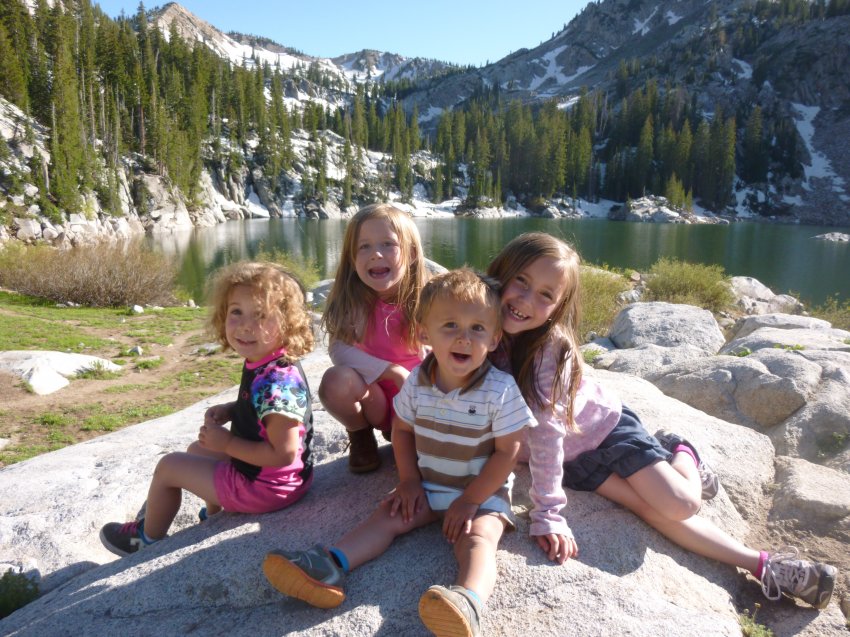 And the bravest chipmunk I've ever seen. It was clearly conditioned to being fed by other people and tried to make friends with us. 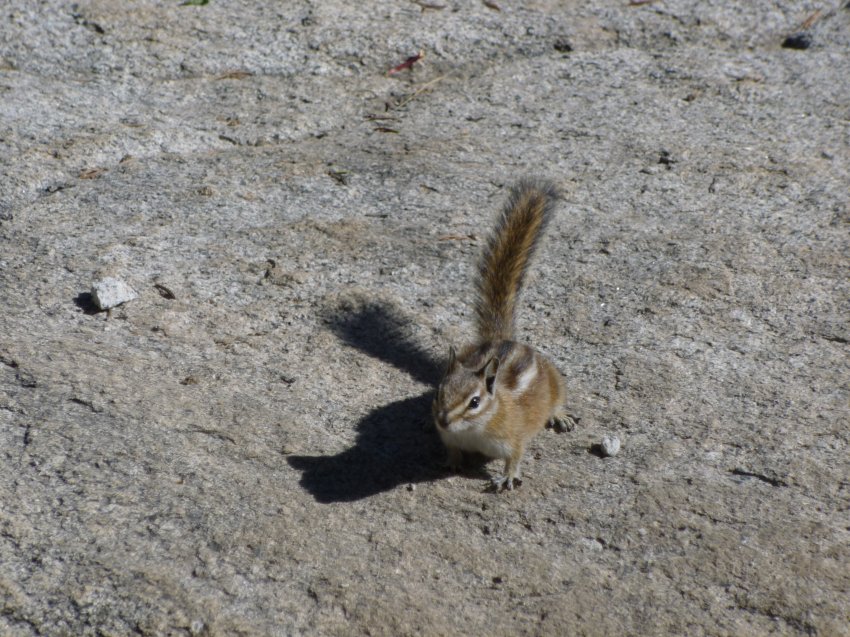 While Jess and the kids rested at Mary, I had wanted to make a run up to Catherine Lake and the pass, but shortly after passing Lake Martha, the trail became more snow than dirt and it became clear that there was still quite a bit of snow tucked back up in there, even prior to the Tuesday storm. I'm skeptical that I would have even made it up safely to the pass even if it hadn't snowed on Tuesday and I had gone ahead with my planned trip from Summit Park to Provo. On the other hand, if I owned a pair of micro-spikes...

Anyway, it will definitely be good to go come July when Jess should be able to accompany me, and if we are successful, it may prove to be a more meaningful experience for her.

Wow! That's still a lot of snow! I hiked Willow Heights and Donut Falls on Thursday and there was quite a bit hiding in the shadows. And lots of tree damage too. A trail crew arrived right as I hit the Willow Heights Trail and it was all clear by the time I returned. Thanks for posting. Looking forward to the redux.
\
Follow me on IG: @backcountrypost
/
You must log in or register to reply here.
Similar threads