I'm looking to try my hand at some snow camping this winter. Does anyone have suggestions of an easily accessible area? Wouldn't mind snow shoeing in either - just not to difficult or far - as this will be my first attempt.

Thanks in advance!
Do not pray for easy lives. Pray to be stronger men. - JFK
Orem Chiropractor

Are you planning on using a tent or snow caving or...?
IG: @backcountrypost

I've winter camped twice...the best part about both experiences was what happened on the hikes out in the middle of the night after I gave up on the camping!

That having been said, the experiences on the hikes out in the middle of the night were some of the coolest experiences I've ever had in the backcountry...so while the camping itself was pretty miserable, it's hard to completely bad-mouth winter backpacking.

For something close to Salt Lake, really anything works. My experience was that it was hard to snowshoe very far, so you don't need to pick anywhere big. A good place might be the north end of the Mirror Lake Highway...maybe just head out on the North Slope Road and find a place to head out into the woods. Or maybe Nobletts Creek or Log Hollow on Highway 35 outside of Kamas. You wouldn't have snowmobile traffic on those trails, but they wouldn't be packed as much (or at all), either.

Night snowshoeing is awesome. But being cold at night, not so much. If we have a decent snow year, you might be able to snowshoe into Smith Morehouse and camp there.

I get the feeling that when you guys say "snow camping", it is not the same as when I say "camping in the snow", which I do pretty routinely throughout each winter.

It's just car camping for me, use almost the same gear as I do the rest of the year, just wear long underwear to bed and use a tent heater being the only real difference. Oh, and I like to put some nice soft coyote hides on the floor of the tent to my feet don't suffer when I get up to take a leak in the middle of the night . I very rarely get cold at night when I camp in the snow though. And it's been decades and many nights since I was anything approaching miserable.

Couple "camping in the snow" (which I don't think is actually the subject of this thread?) pics from last winter. 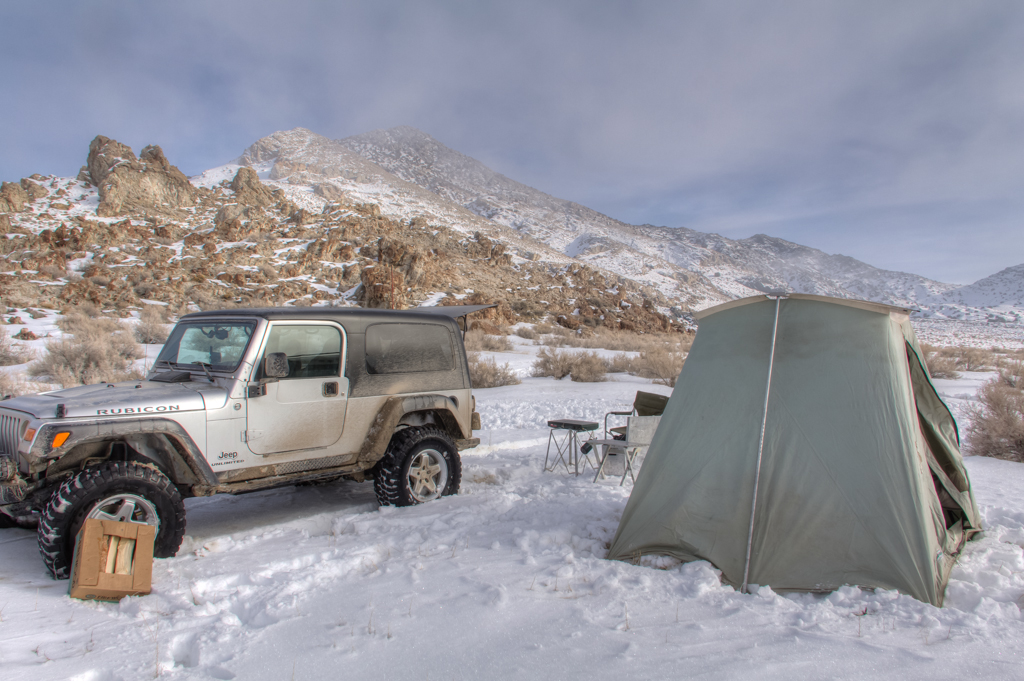 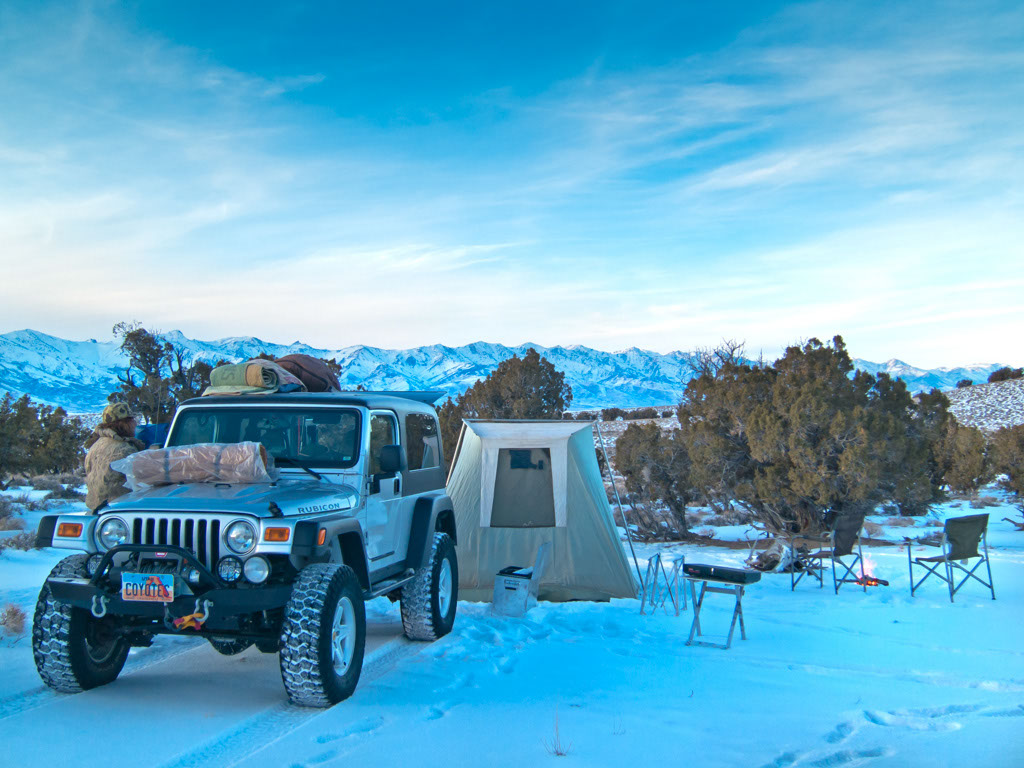 I just go wherever I feel like going, as long as the snow isn't too deep to drive and walk around in. The first of the above is in the Newfoundland Mtns and the second is the Maverick Springs range in Nevada (saw -19F that night, but suffered not at all).

Okay... Sorry for the sidetrack.

I'm not too big on winter camping but have often camped on spring snow in the Wasatch mountains. The main differences from summer are that it's always easy to find water (though you need to take some extra fuel to melt snow), it's always easy to find or make a flat place to sleep, and you want to make sure the r-value of your mattress pad is sufficient to keep too much warmth from leaking down into the snow.

If going backpacking, you might just head out on a day hike with your snowshoes (or skinny skis) to explore and scout out an area. Then come back in a week (or few days). You'll know where you're going, plus the snow will be setup from your previous tracks and make traveling SO MUCH easier!!! Or just go on a trail that others have used and packed down!
“We don't stop hiking because we grow old - we grow old because we stop hiking”
― Finis Mitchell

Thank you all for your comments!

@Nick I hadn't considered it but building a snow shelter would be a lot of fun. Do you have any experience with building them?

@DAA what kind of tent heater do you use?

Does anyone know if the Mirror Lake highway stay plowed through the winter? If not how high can you typically get from Kamas?
Do not pray for easy lives. Pray to be stronger men. - JFK
Orem Chiropractor

DrNed said:
Does anyone know if the Mirror Lake highway stay plowed through the winter? If not how high can you typically get from Kamas?
Click to expand...

I once tried to build a snow cave. I was pretty worn out after about 30 minutes, and I just gave up. As long as you can pace yourself and not get overheated, though, I think you should be fine. You can heat a snow cave with just a candle, from what I understand.

Don't mess with a snow cave if you don't have experience. They can collapse and that's a potentially fatal situation.

DrNed said:
@Nick I hadn't considered it but building a snow shelter would be a lot of fun. Do you have any experience with building them?

@DAA what kind of tent heater do you use?
Click to expand...


Just a simple Mr. Heater propane unit. I'm on my second one, the first one only lasted 25 years. I only run it just before bed and when I wake up, before climbing out of my sleeping bag. It get's that little Springbar in the picks above uncomfortably warm in mintues.

DrNed said:
@Nick I hadn't considered it but building a snow shelter would be a lot of fun. Do you have any experience with building them?
Click to expand...

I did it once in boy scouts. Here's what I remember...

We went up the day before and found a nice bit of snow that was bordering on a cornice but not overhanging. Lots of drift though. We dug straight in a little tunnel and then dug out a room big enough for 3 of us to sleep in. We went home and dried out and the next day we came back with camping gear to sleep in the cave. We slept in it all night with no problems. We peed in the walls when we needed to go. Yes, we actually just dug out a little hole and peed in it. I also remembered it smelling horrendous from all the flatulence. Oh, and that year's Sports Illustrated swimsuit issue was OUTSTANDING. I was about 12 years old at the time I think. Probably not much help, but it was pretty fun.
IG: @backcountrypost

That sums up scouting so well, Nick.

I wonder a bit about gear for winter camping? Do you all use your three season tents or do you have specific winter gear?
My winter camping trip is coming up end of December and I will stay for a few days in the Moab area.
http://yvonnebaurphoto.smugmug.com/

Miss Buffalo said:
I wonder a bit about gear for winter camping? Do you all use your three season tents or do you have specific winter gear?
My winter camping trip is coming up end of December and I will stay for a few days in the Moab area.
Click to expand...

A 3-season tent is fine so long as you aren't dealing with snow load/storms.

When it's really, really cold out I'll bring along my thermarest foam pad and put it underneath my 4-season inflatable. That extra warmth underneath can be huge and since weight isn't an issue, load up on the pads.

Covering water jugs/bottles with a blanket or unused sleeping bag or something is often enough to keep them from freezing. If they're going to be out, storing them upside down or sideways can be good that way the ice usually develops on the side that you don't drink out of.

Boiled water in a water bottle inside your bag can be really nice for some added warmth.

thanks Nick, this is really helpful.
I am primarily concerned about the potential snow load during a storm. Unlike winter tents the three season tents aren't constructed to hold a lot of weight. I guess if I get caught in a really bad and heavy storm I will stay at a hotel, otherwise camping is fine.

As you mentioned weight is no matter so I can bring all my heavy weighting gear for insulation.

Good point with the fire wood. I will definitely bring a lot.
I also invested into a lot of really warm gear and sleeping bag this year as I tend to get cold very easy.
My first test will be next week during a camping tip into the Vermillion Cliffs area.
http://yvonnebaurphoto.smugmug.com/

I use almost exactly all the same gear year round for car camping. No idea what seasons a Springbar is rated for, but I don't think I've ever seen more than about 12" on the roof of it and couldn't comment on heavier snow than that. I usually stand up and punch the roof a couple times to clear it before going to bed and again after I get up. I use the same sleeping bag, pad and cot all year round when car camping. Just put on some clothes to sleep in for winter and unzip the bag for summer.

Only two things I take specific to winter camping are a propane heater, and some coyote skin rugs to put my delicate little footsies on so they don't get cold and wet when I have to get up in the middle of the night.

For keeping water thawed out, I just try to always keep a sauce pan filled (you can just make it out on the stove, steaming in the second pic below). It's always a solid block of ice in the morning, but I put it on the stove to thaw and once it starts boiling I can put other frozen bottles of water in it to quickly thaw so that I leave it full again until the next time.

Couple of recent snowy camps, first one Henry Mtn's two weeks ago and second one yesterday morning on Cedar Mesa. 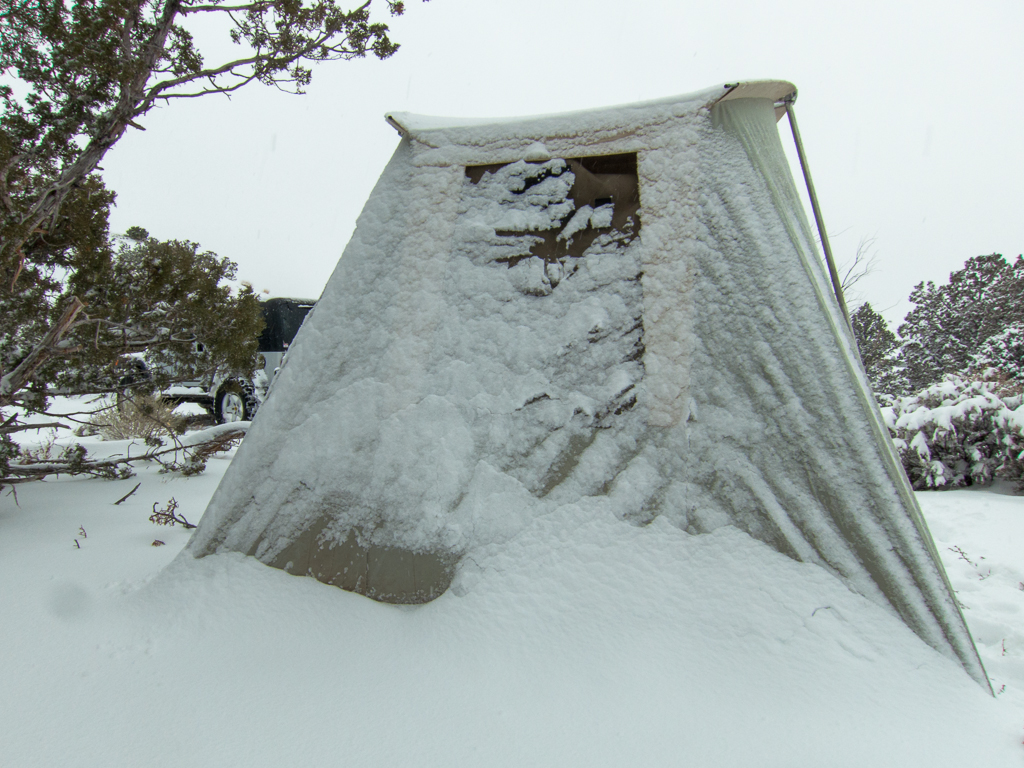 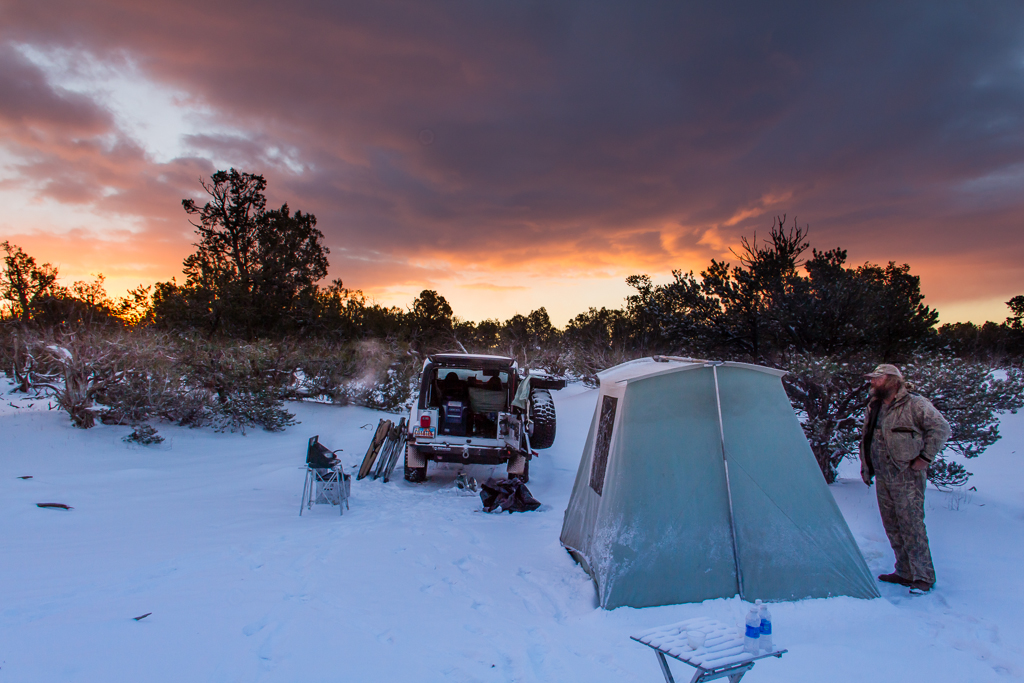 When I know I'll be camping in one spot for a couple days or more with snow, I usually take a broom with me too. Comes in handy for clearing snow from the tent both inside and out. 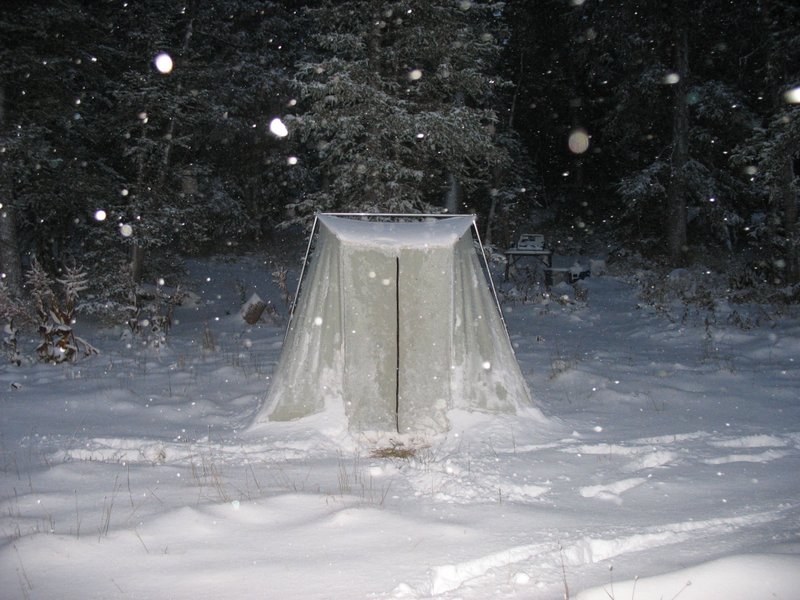 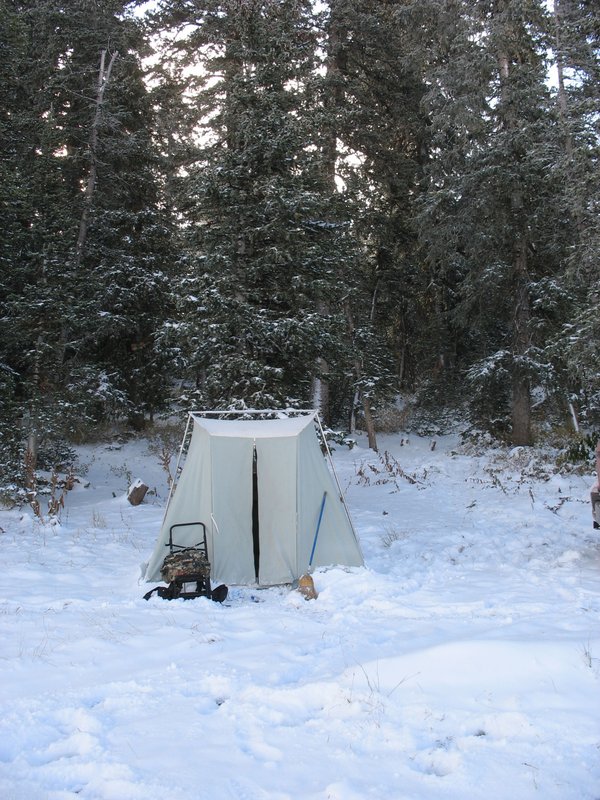 awesome!! Thanks for all the information.
I'm excited for my upcoming winter trips.
As it comes with a broom, I always have one in my car. I guess I can't get rid of the winter weather preparedness that was crucial while living in Buffalo, NY. I still have my sleeping bag, blankets, shovel, food and water in my car and it stays there as long as I have my snow shoes each winter season.

how did your propane stove perform in the extreme cold? Any problems? I will have mine along with me, but haven't used it yet in really cold temperatures.
http://yvonnebaurphoto.smugmug.com/

Never had a problem with the propane stove, as long as I don't forget to keep it closed when it's snowing and let the burners get full of snow. I've done that a few times...

The flame wants to be pretty weak when it is really cold, but if you invert the canister, it goes as good as ever. Have used mine like that down to almost -20*F, no problems. It was about -8*F in the picture from Cedar Mesa this weekend.

- DAA
You must log in or register to reply here.
Similar threads