I combined a few vague clues in a 30 year-old rock art newsletter, a rough site sketch in a 60 year-old book, and a few hours squinting at satellite images on Google Earth to locate what sounded like a fairly significant but mostly unknown petroglyph site in Western Nevada. It was surveyed in the 1970s and was said to be a hunting site with blinds, stone habitation rings, and rock art on more than 800 different boulders. It was added to the National Register of Historic Places (address restricted) a few years later. After that there seems to be no mention of it. 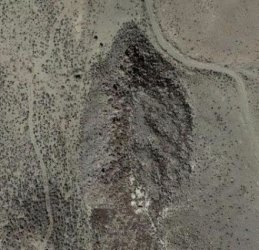 I drove out there on Saturday to investigate, and after navigating about 15 miles of well-maintained gravel road I got to within a quarter mile of the site. A brief surveillance with my binoculars failed to turn anything up, and a quick walk up and down the road didn’t reveal any trails…I began to worry that I might not be in the correct location.

Undeterred, I rock-hopped across a small stream, plunged into the brush and made my way towards the boulder-strewn ridgeline. 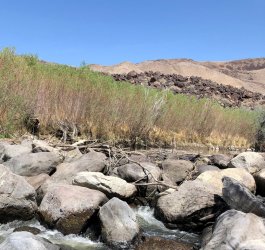 Once there it didn’t take long to confirm that I was in the right spot. The rock walls of this hunting blind was the first thing I spotted. 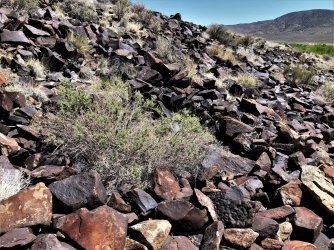 That was quickly followed by petroglyphs…lots and lots of petroglyphs. 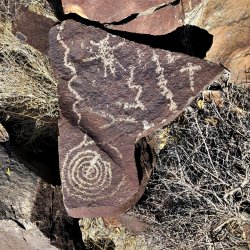 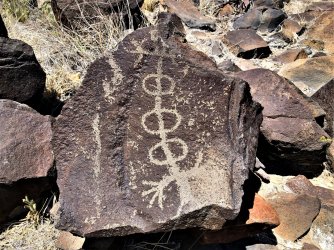 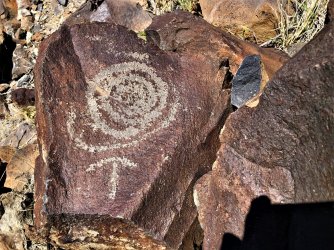 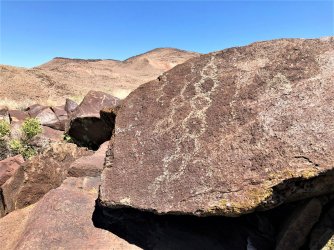 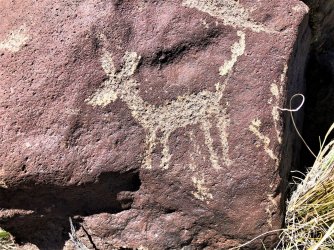 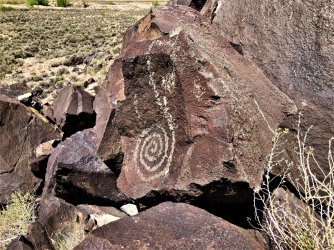 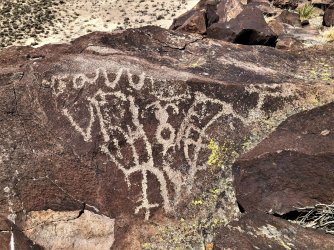 Once up on the ridge I reached the stone circles I was able to see from the satellite images. 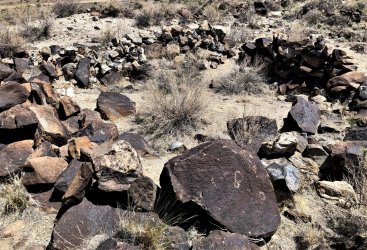 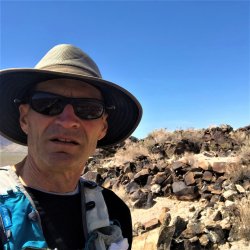 There was more rock art to be found, and I'm sure I missed quite a few. Some of them were quite unusual, like this large (3') leaf/plant glyph: 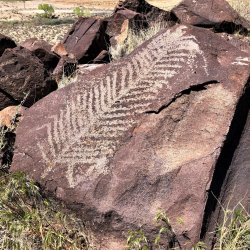 This one looked to me like a deer that was splayed out and about to be butchered: 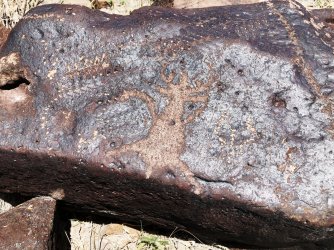 Bighorn sheep are commonly depicted in rock art, but it's unusual to see them depicted in this "head-on" three dimensional manner: 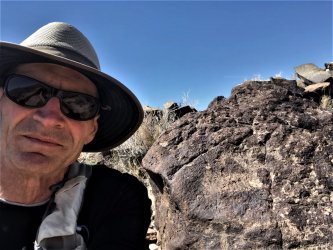 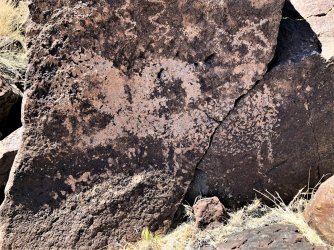 While it wasn’t the most elaborate rock art I’ve ever seen, the “cool factor” was top notch. I wouldn’t see a single footprint other than my own all afternoon, so successfully solving the location riddle brought a certain sense of accomplishment. All I could think about as I admired their work was how incredibly fortunate I was to be having this experience. The ancient hunters had pecked these stones to record and celebrate their successful hunts, and I was feeling a little of that same satisfaction.

Beautiful stuff, Tony. Thanks for posting this. Now that Sonora Pass is open, we're ready to go exploring over the top!
Check our our website: http://www.backpackthesierra.com/
Or just read a good mystery novel set in the Sierra; https://www.amazon.com/Danger-Falling-Rocks-Paul-Wagner/dp/0984884963

balzaccom said:
Now that Sonora Pass is open, we're ready to go exploring over the top!
Click to expand...

Thanks! I came home over Sonora Pass...the Nevada side and the summit are beautiful right now. I hadn't realized so much of the western side had burned...sad to see. Also scary to see those 10-12' high road/snow markers up near the summit and only a foot or so left up there. 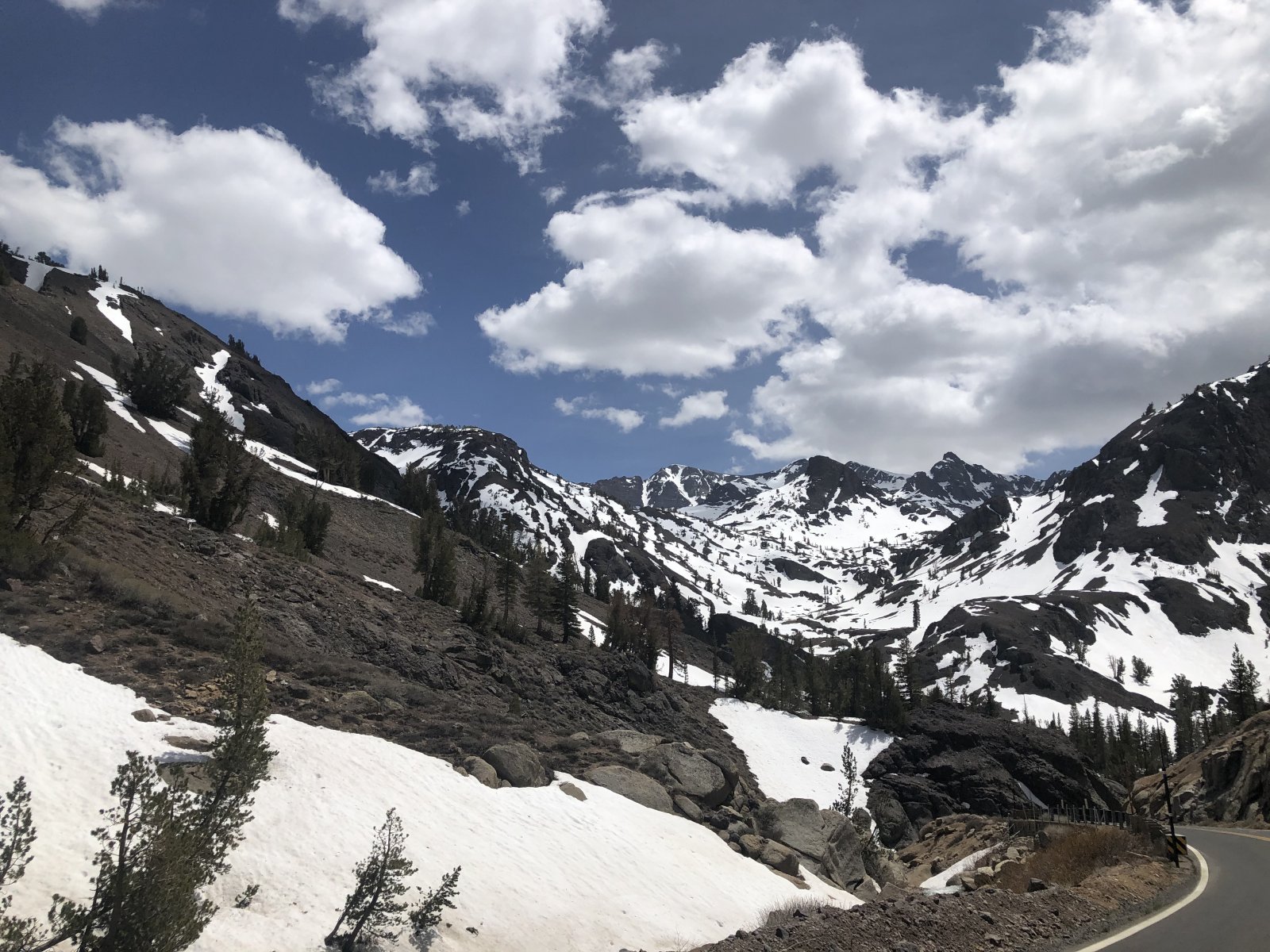 Yes indeed. We have a cabin up above Sonora...and are looking forward to a few trips in the coming weeks. Usually we wait for June, or later.
Check our our website: http://www.backpackthesierra.com/
Or just read a good mystery novel set in the Sierra; https://www.amazon.com/Danger-Falling-Rocks-Paul-Wagner/dp/0984884963 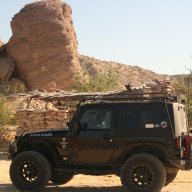 Can you give me an idea where this is? I will be glad to trade you for a couple to repay you for the info. I have 4800 sites in the SW mapped
You must log in or register to reply here.
Similar threads