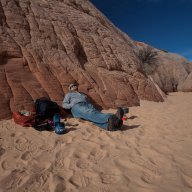 I recently spent a few days shooting wildflowers and mountains in the San Juan Range of Colorado. My original plan was to spend a few nights camped out at Ice Lakes Basin but due to the intense lightning storms that have been plaguing the area (and me being a bit intimidated by them) I decided instead to head up to American Basin and see how the wildflowers were faring. My choice seemed good since although I weathered a few storms the flowers were in full bloom and overall I had a some great weather for photography; the overcast skies gave me the chance to shoot wildflowers under some soft light conditions which is something I've been looking forward to.

The trip started out with a boom, literally, as I was fueling up in Bayfield I saw a flash of purple light above the gas station and simultaneously an impressively loud and deafening clap of thunder exploded all around me. That was probably the closest I've ever personally been to being hit by lightning. So with that eye-opening experience behind me I headed toward American Basin, taking the long way around from Durango and driving through a massive rainstorm that seemed to be leaving about an inch of standing rain on the roadway.

After all of that I ended up driving up toward American Basin with the rain still falling down, making the road up rather wet and muddy, but totally passable. By the time I arrived at American Basin that evening the rain was just starting to slow down and I was able to get out and walk around a bit, noticing that the wildflowers were definitely in full bloom. Unfortunately it wasn't long before another storm came over the ridge and drove me back to the protection of my truck to wait out the violent lightning. Luckily this year I didn't have any run-ins with crazy marmots. Last year while waiting out a storm in my truck parked at the American Basin Trailhead I had a marmot crawl up into my engine, but that's a different story.

The night proved to be stormy and filled with lightning and I feared that the morning was going to be rainy, fortunately for me I was wrong. It was a little bit too gray for good sunrise colors but the overcast stormy skies made for a great opportunity to shoot some close-ups of the beautiful wildflowers filling the lower basin. 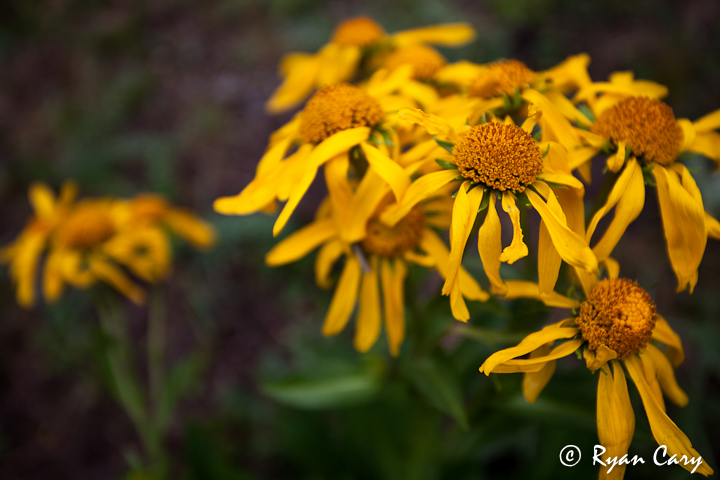 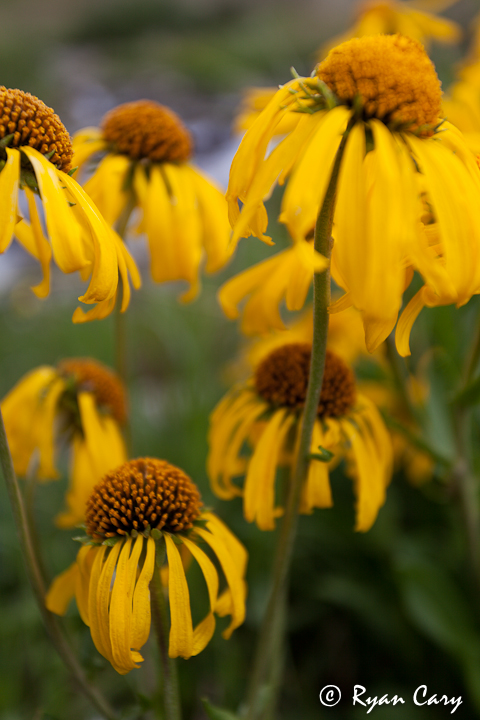 There were great colors to be found in the Mule's Ears and even a few Columbine scattered around here and there. 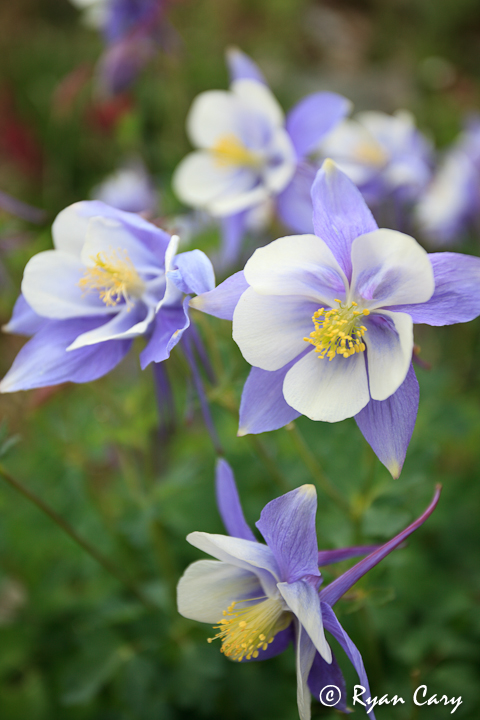 The morning was cloudy but the storm clouds also made a nice backdrop when contrasted with the beautiful colors of American Basin in full bloom. 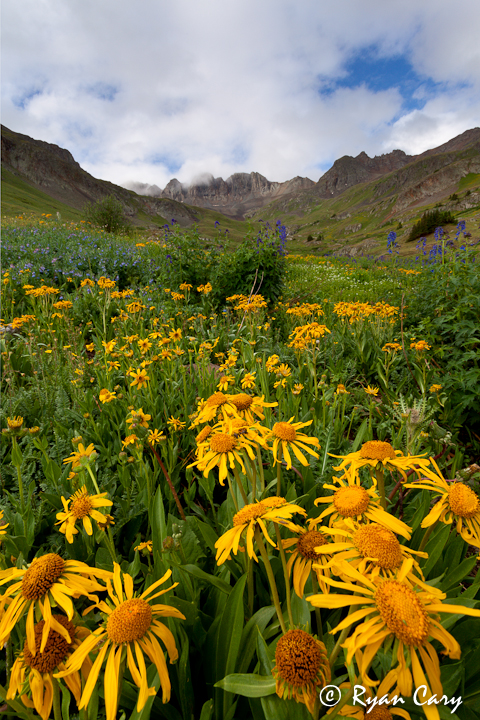 I ended up staying at American Basin and shooting images for about two days before I decided it was time to head back toward home. My plan was to head up toward Silverton and see what the weather was doing before deciding whether or not to do a quick overnight backpacking trip into Ice Lakes Basin or not.
So off I went headed down and out from American Basin and back toward Creede. Outside of Creede there is a a waterfall called North Clear Creek Falls that I've always wanted to check out so I decided to make a pit stop and shoot a few images. The one-hundred foot North Clear Creek Falls really is a magnificent waterfall. It dramatically drops one hundred feet from the rolling grasslands into a rocky gorge far below. 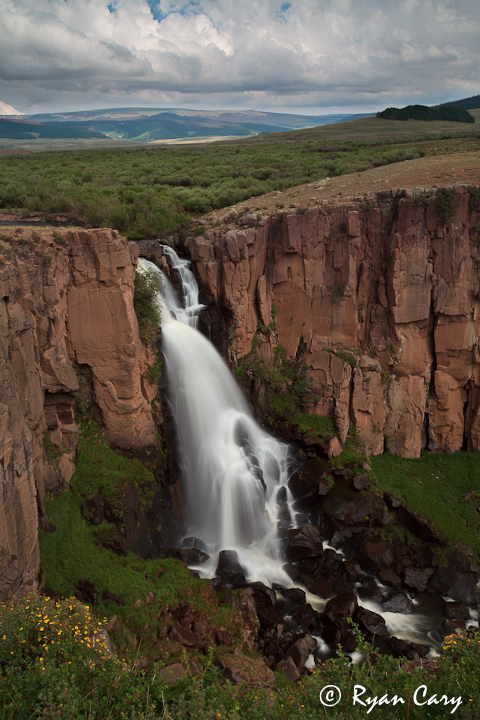 After my pit stop it was pretty much smooth sailing to Silverton, interrupted of course by the occasional torrential downpour. None the less, I arrived in the Silverton area by late afternoon and decided to make some dinner while pondering what to do and evaluating the weather. Should I head home or backpack into Ice Lakes Basin? That is the question...

So there I was, cooking dinner on my little stove, bean soup to be exact, when the answer as to whether I should backpack in to Ice Lakes Basin or head home came to me, I would do neither. I decided instead to sleep in my truck at the trailhead to Ice Lakes Basin to avoid having to camp out in the massive lightning storms that were hovering amid the peaks all around me and get up at around 2am to hike up to the basin, weather permitting of course.

So I spent the evening driving around in the rain and exploring a few places that I hadn't been to before, looking at some old mining buildings in the area and checking out a local waterfall before retiring to the back of my truck for a few hours of sleep before my hike up the steep trail to Ice Lakes in the dark.

Two 'o' clock came around pretty quick and I was up and at it, I had packed my bag the night before so I was off on the trail pretty quick, guided by the light of my headlamp. There didn't seem to be any stars out which made me think that perhaps I would be shut out for sunrise, but I figured there was only one real way to tell, and that was to be up at Ice Lakes ready for sunrise in case it did happen. I had planned for about three hours of hiking time since sunrise was going to be around 5:30am but it seems that I made pretty good time since I hit the Lower Ice Lakes Basin around 4am.

When I walked into the lower basin I noticed a headlamp moving around slowly on the far end, I figured it was either a climber or another photographer that had camped the night in the lower basin, getting an Alpine Start to the morning, not quite as Alpine as mine but early none the less. As I got to the far end of the basin the light had a face and a voice and I was greeted with, "...so are you a photographer or a climber?" Apparently he had the same thought that I had when I first saw his light. We ended up walking up from the lower basin to the upper basin together and sharing the uphill slog made it go by a bit faster. As it turned out, this was none other than Glenn Randall, a fairly renowned and well-known Colorado Landscape Photographer. I was pleased to have met him and to have shared a few stories with him on the hike up to the Upper Basin, as we approached Upper Ice Lakes Basin he said that he was heading to Fuller Lake and I was welcome to join him but I had my heart set on shooting Ice Lake so we parted ways.

Without having done any scouting to know where the wildflowers were along the lake shore it was a bit difficult to set up for the approaching dawn, but I did my best and waited in the darkness to see what the morning would bring. Soon enough the first light of day started to paint the foggy peaks surround Ice Lake and I was pleasantly surprised by the show that unfolded in front of me.
First the sky turned purple saturating the fog banks rolling in and out of the cirque surrounding Ice Lakes Basin, making the whole scene in front of me seem very surreal. It was definitely one of those unforgettable moments that I feel very fortunate to have witnessed. 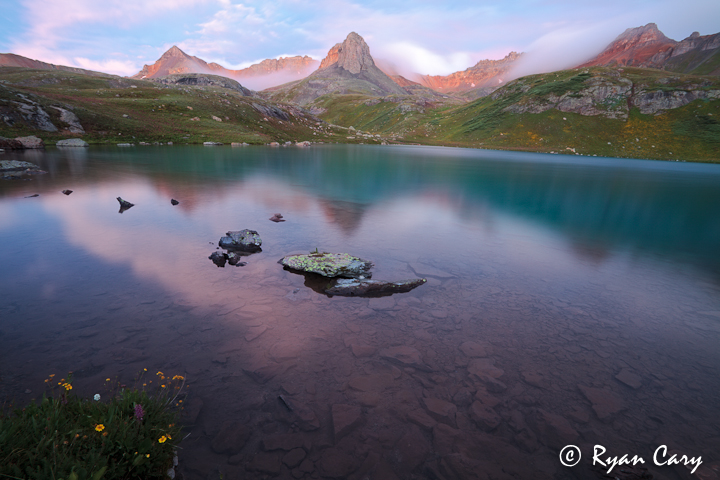 After the purple tint started to disappear the sun started to slowly approach the horizon and the storm clouds took on the pink and red of a magnificent sunrise, embellished by the fog banks still rolling in and out of the distant peaks it was truly a sight to see. In the photo below you can see Vermillion Peak to the left with Golden Horn in the center and Pilot Knob to the right mostly covered in clouds. 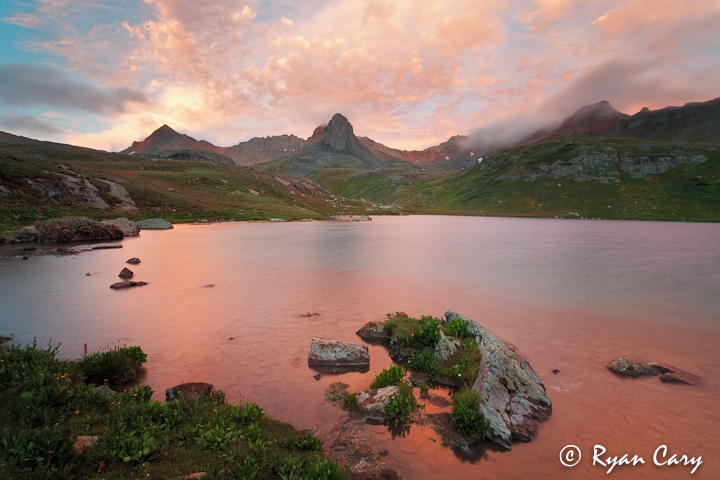 Soon after I took this image the fog started to thicken and started to fill the whole valley. There was much more light now and I noticed that there were a lot of wildflowers near the south shore of the lake so I quickly repositioned myself over by the wildflowers in an effort to get a few wildflower images before the whole valley became engulfed in fog. 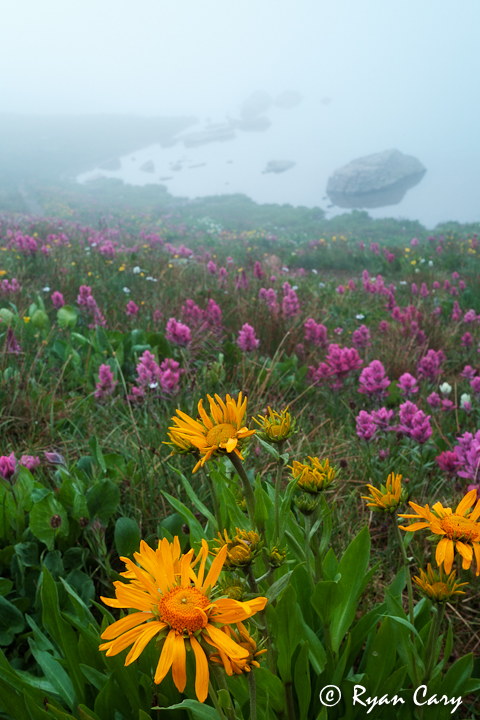 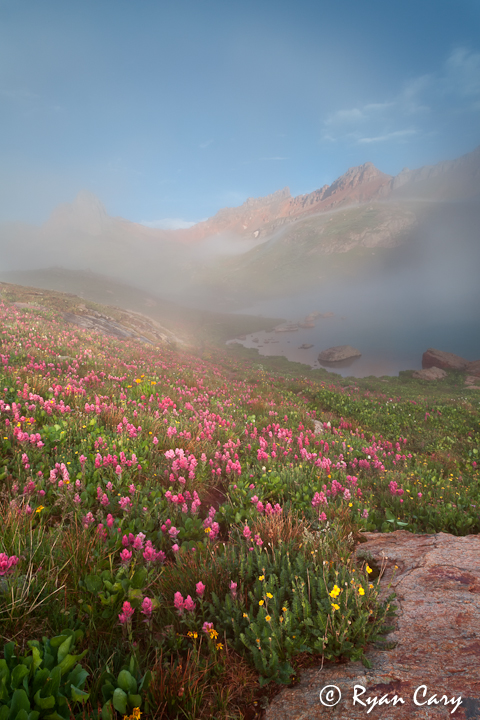 The whole scene was kind of like a dream as the fog drifted in and out of the valley and in and around the distant peaks until all of a sudden, a few seconds after I made the image above a massive cloud drifted up from the lower basin and it truly engulfed the entire basin in white. It was a rather dramatic end to a dramatic sunrise shoot, fitting I suppose.

I spent the next couple of hours hiking around the upper basin exploring here and there before making my way back down the trail to my waiting truck at the trailhead. It was a great morning and I was happy with the decisions I made about hiking in at 2am. It was the perfect end to a great wildflower trip. 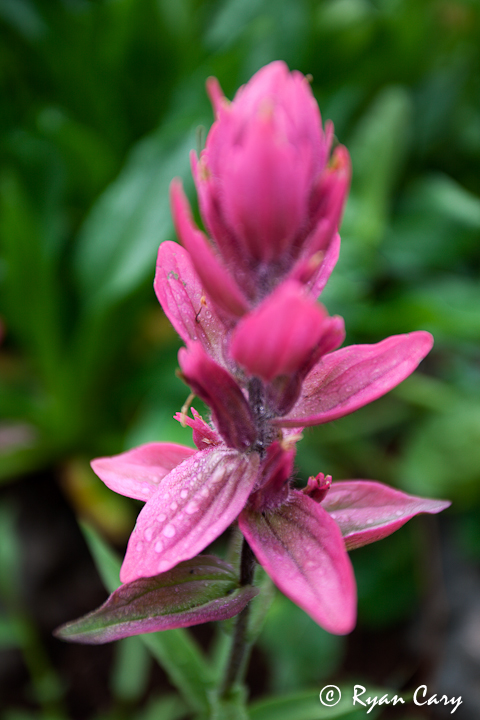 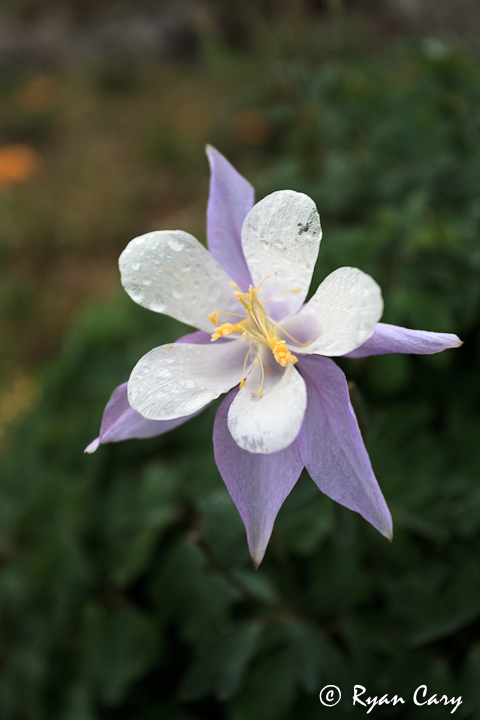 great shots!! I really can't decide which one I like best.
http://yvonnebaurphoto.smugmug.com/

Same here! My favorites are: The Columbines at the top; the waterfall; the featured image; and the pink flowers with the fog (3rd to last photo)! So awesome!!!
“We don't stop hiking because we grow old - we grow old because we stop hiking”
― Finis Mitchell