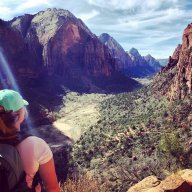 I'm currently trying to plan a trip for spring break 2016, from around March 11-19. We are planning to go to Zion for just some day hikes on either end (been before, last March) and wanted to do a nearby backpacking excursion. We had originally wanted to do the Trans Zion Trek but have heard that March is a pretty terrible time of year to do it. So now we're leaning towards Grand Staircase Escalante but we have no experience there at all! So we would love a little advice to point us towards some awesome backpacking routes there. We have an SUV so most roads won't be an issue for us. At this point, the plan would likely be to arrive in Zion on March 12th and spend all day the 13th there, and leave the afternoon of the 14th or early morning the 15th for Grand Staircase. This would give us all day the 15th, 16th, 17th, and 18th. We have a 16 hour drive back home so possibly some time on the 19th but we would rather not be driving home on the 20th. We're both pretty experienced and prepared to do long days but would be happy doing an easier trip as well.

We would prefer a loop so we don't have to coordinate rides but with an inexpensive shuttle service or something we could definitely be flexible!

How about Grand Gulch? Collins Spring - Bullet Canyon (pick a different combination of trailheads depending on how many miles you're looking to do) and hitch back to your car. Go buy a couple of $20 beater mountain bikes at Goodwill and park them at Collins Spring if you want to save six miles of dirt roadwalking to get back to pavement (from whence you can hitch).

You could also do some interesting things with Upper Muley + Lower Muley Twist at that time of year. Cache water at the trailhead between the two (you could also cache some at the Post rather easily if you wanted to break up a ~25 mile water carry). Logistics would be a breeze and the scenery leaves nothing to be desired. I think the two together would be 40 miles. You could even extend it south if you wanted to do the Halls Creek Narrows/Hamburger Rocks/Brimhall Arch area. You could also hit up Muley Tanks as a water source.

If you're an experienced route-finder and like the taste of a little adventure, you could do a semi-off-trail loop in the Needles of Canyonlands. Start at the Indian Creek rockclimbing area and head down Indian Creek. At a very specific spot (if you're interested in this one contact me for the details), climb out of Indian Creek and head overland across the mesa tops and down into another series of unnamed canyons. Emerge near the Upper Jump and follow some 4wd roads past the visitor's center into the Needles proper. You can then do 25 or 30 spectacular miles in the park and end up back at the road you started at. It'll be the world's easiest/shortest hitch back to your car. Total loop mileage would probably be 40-50 miles with a little less than half off-trail. Again, this is not a route for beginners.

Anyone have input on the Paria in March? Too cold?

In general, the "beater mountain bike" trick is a great strategy for southern Utah where you can't do a full loop, and there's not enough traffic on dirt roads to be able to reliably hitch. The only "inexpensive shuttle service" that you'll find in southern Utah, outside of Bryce/Zion National Parks, is your thumb or your legs.
You must log in or register to reply here.
Similar threads