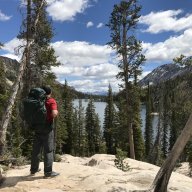 One of my favorite seasons of the year to visit southern Utah is in the winter. Solitude is the biggest draw for me this time of year! So the first week of January 2022 I picked up my brother in law and headed down from northern Utah. They had received rain and snow the week before and it was a cold stretch, so we knew we had to hit the roads at optimal times of the day when they were frozen. We packed enough food and water to self sustain several extra days in case we got the vehicle stuck. We also brought a satellite phone if needed. We did check in at the Ranger station to give them our general location. This trip would prove to be a balance of being wise, safe and slow at times, and being aggressive and pushing through discomfort at others. 4 days and 3 nights of winter backpacking was the goal! Dropping in and out of several canyons not knowing how much snow and ice was waiting for us was a great challenge. I hope you enjoy the limited pics I'd like to share, all just taken on my phone.

I always love driving in at night, with all the stars, darkness, and stillness of the high desert taking over your senses! We hit dirt around midnight and headed in. 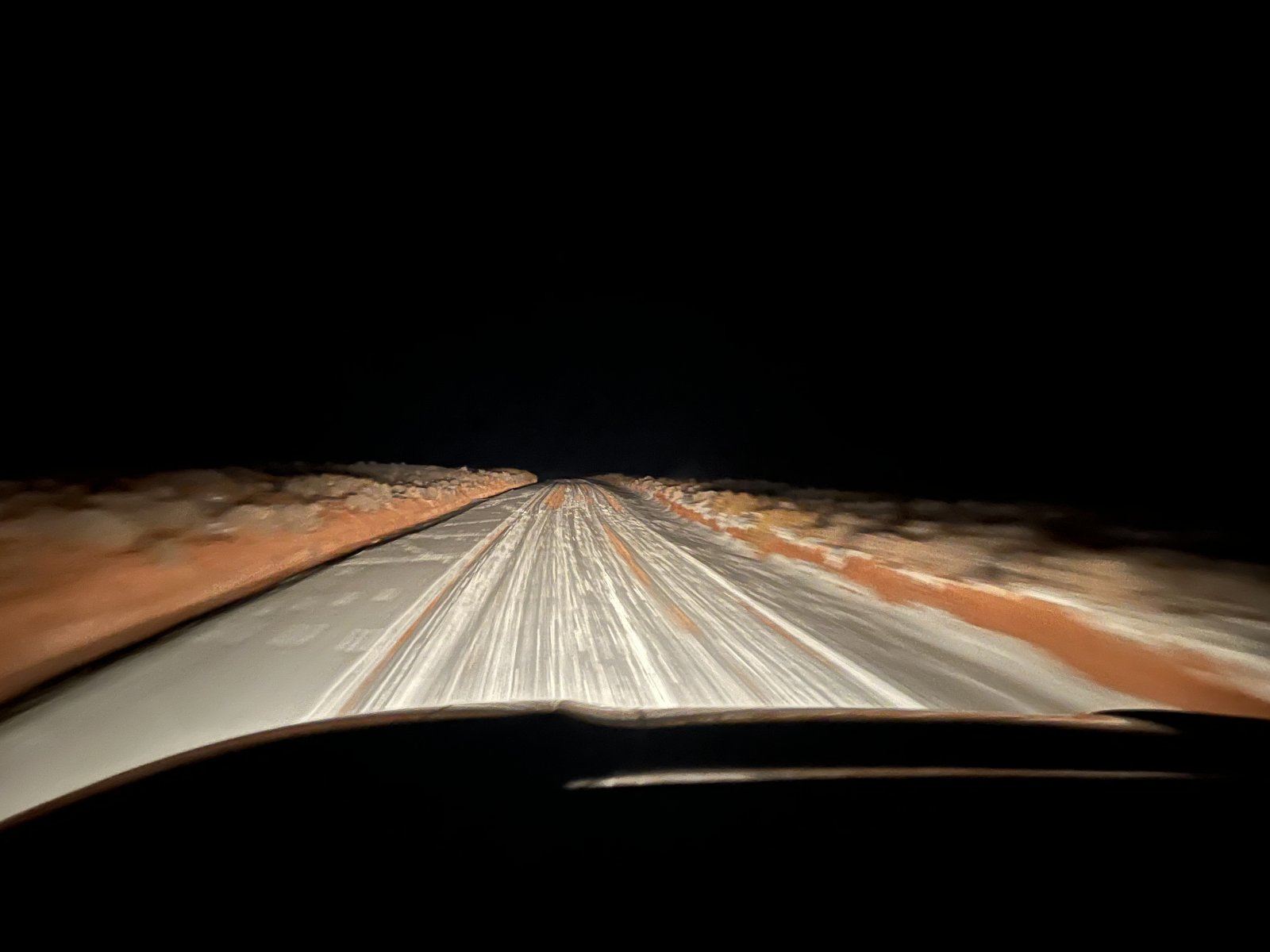 The first night I slept next to the car and my bro in law in the back seat of the car. I use my bigger tent by the car so I can fit my Exped pad in it and sleep great that first night. At 46 years old- more and more I need this first comfort night. Took this with my phone so it sucks- but you get the point, stars were popping! 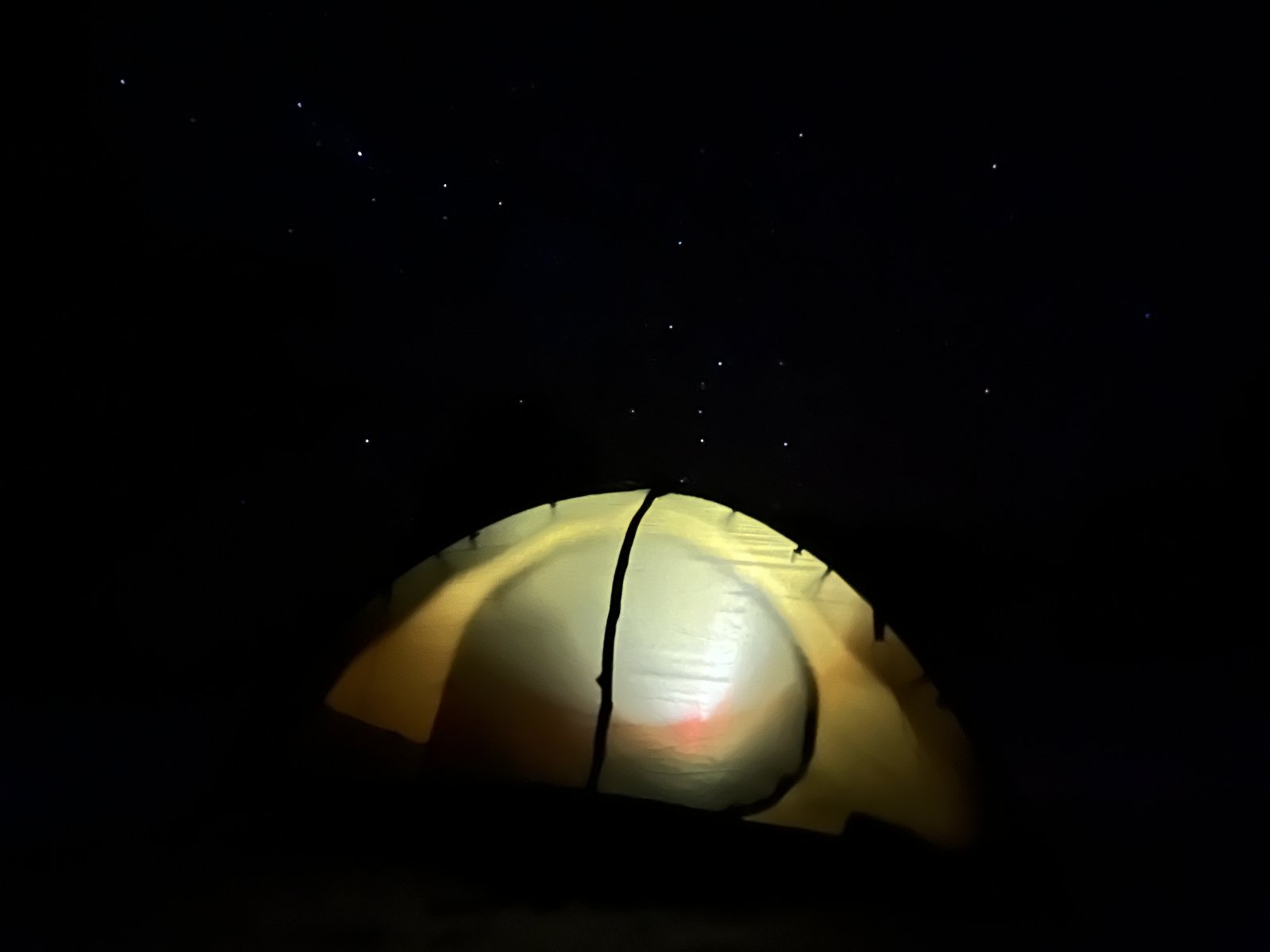 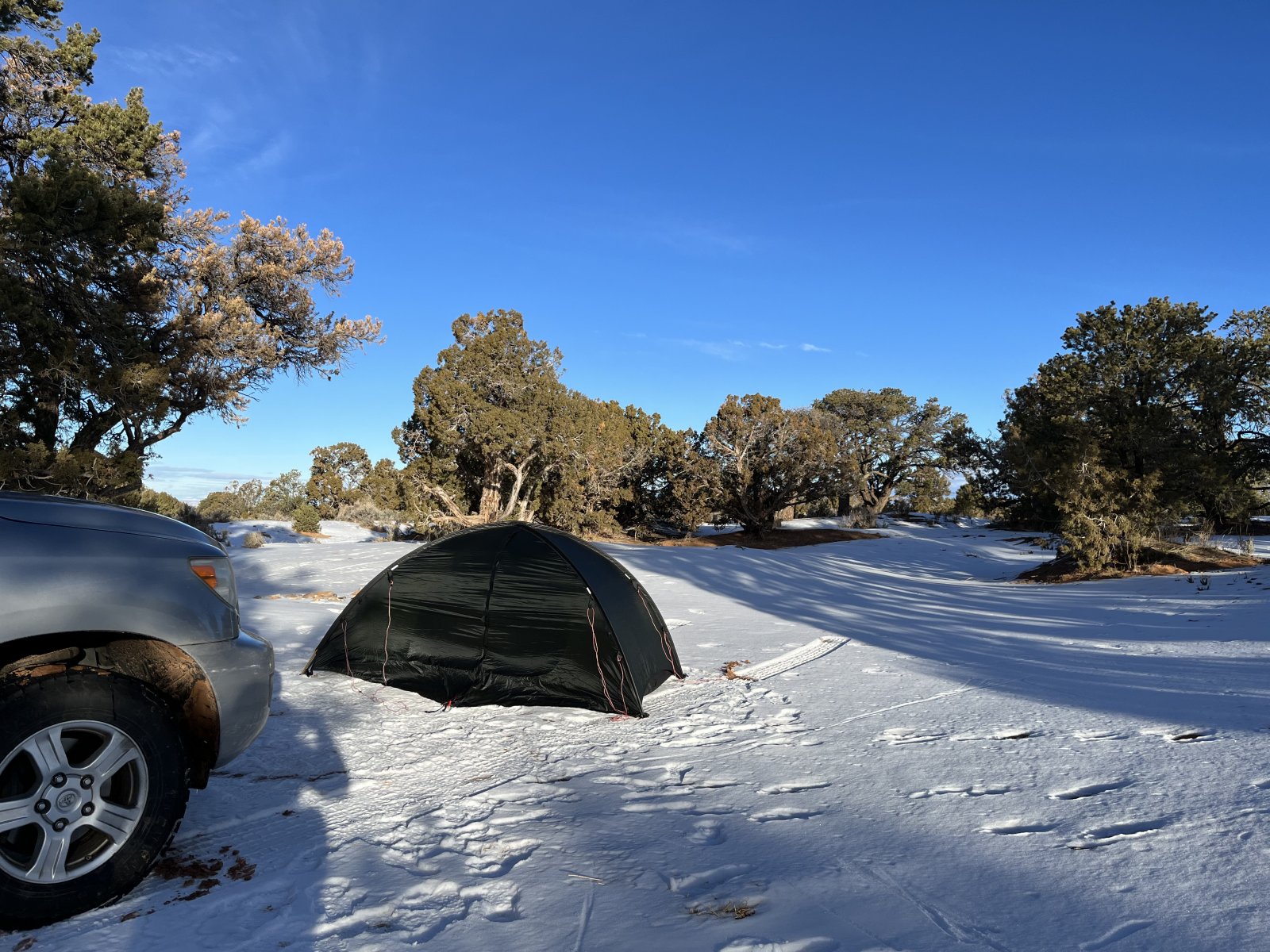 The following morning the roads were still frozen so we drove to our starting point to start exploring.
No tire marks = No people! 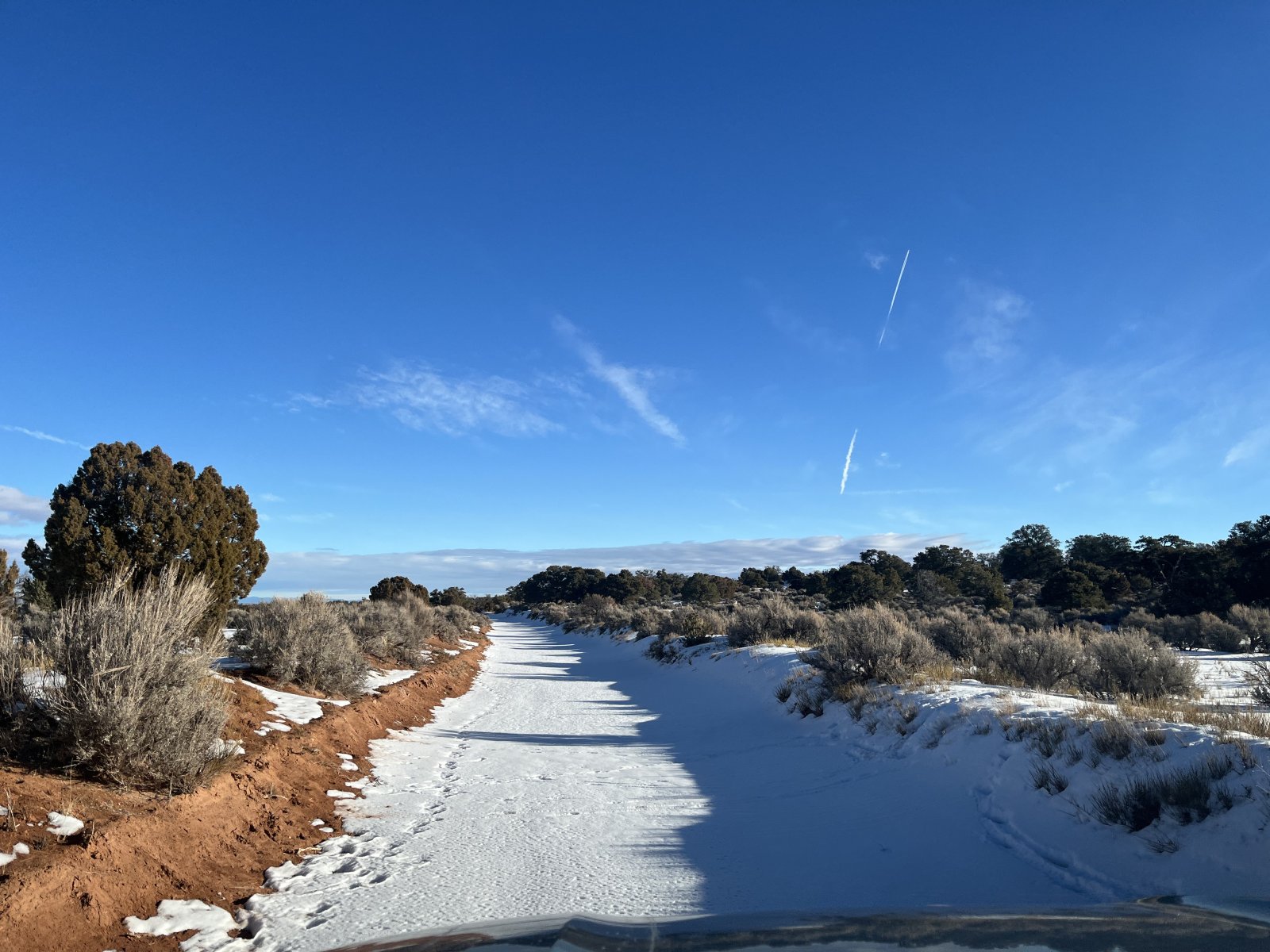 It was amazing the difference in the south facing and North facing slopes, especially in the winter the sun makes life a lot easier dropping in and out of the canyons on the south facing ledges. This was no route, just a lot of wandering... ha ha! Here are a few of my favorite shots. 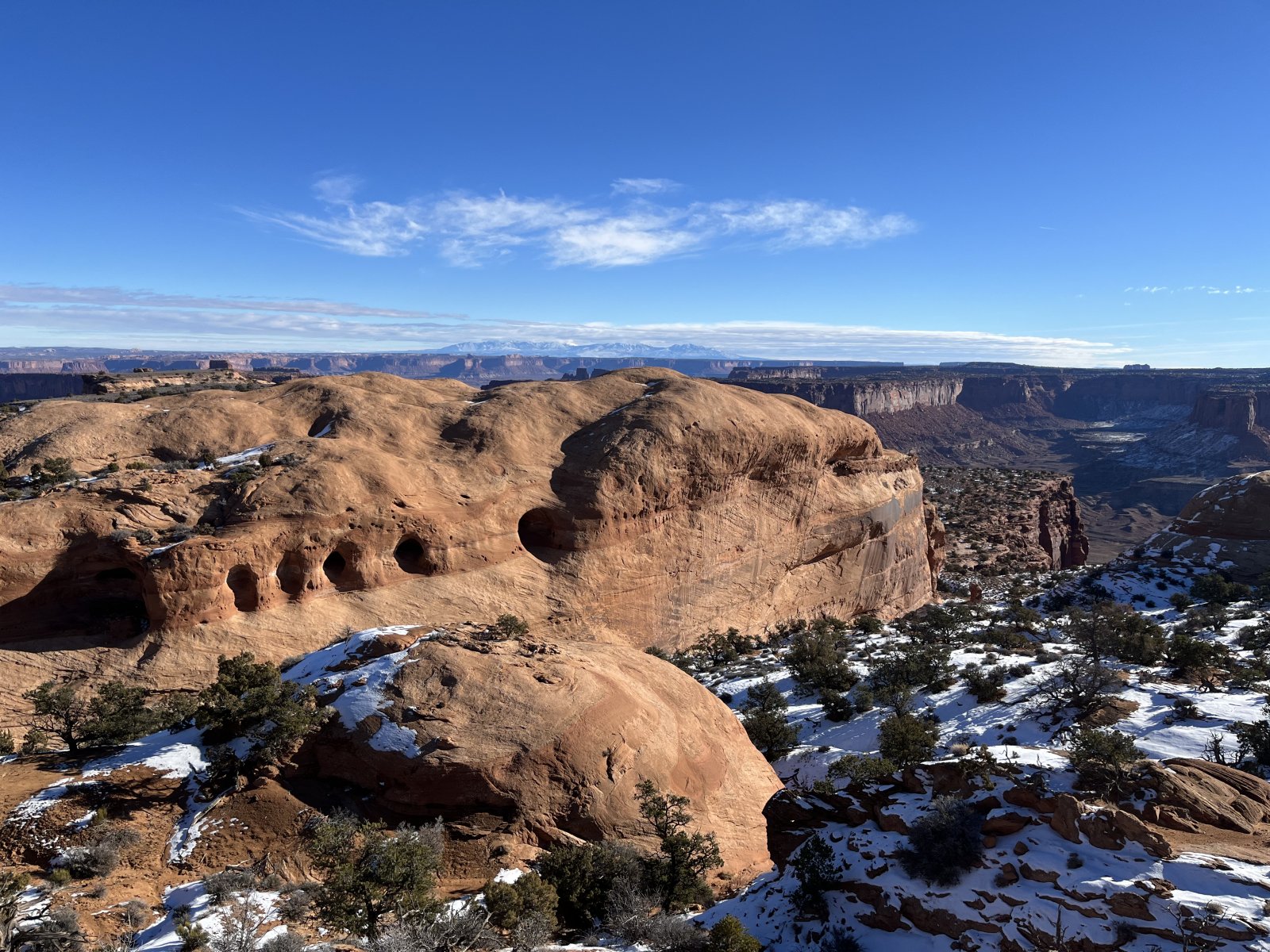 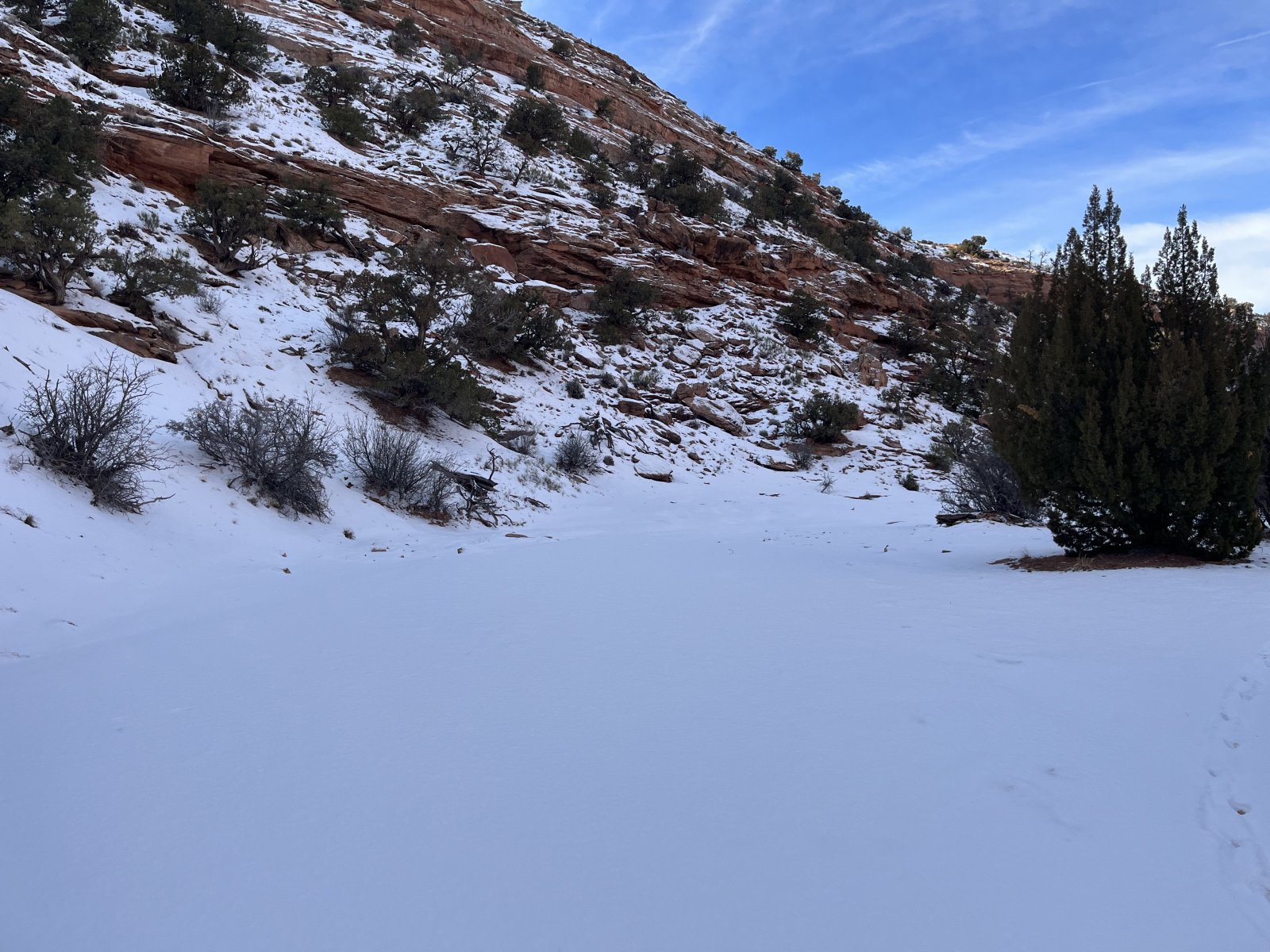 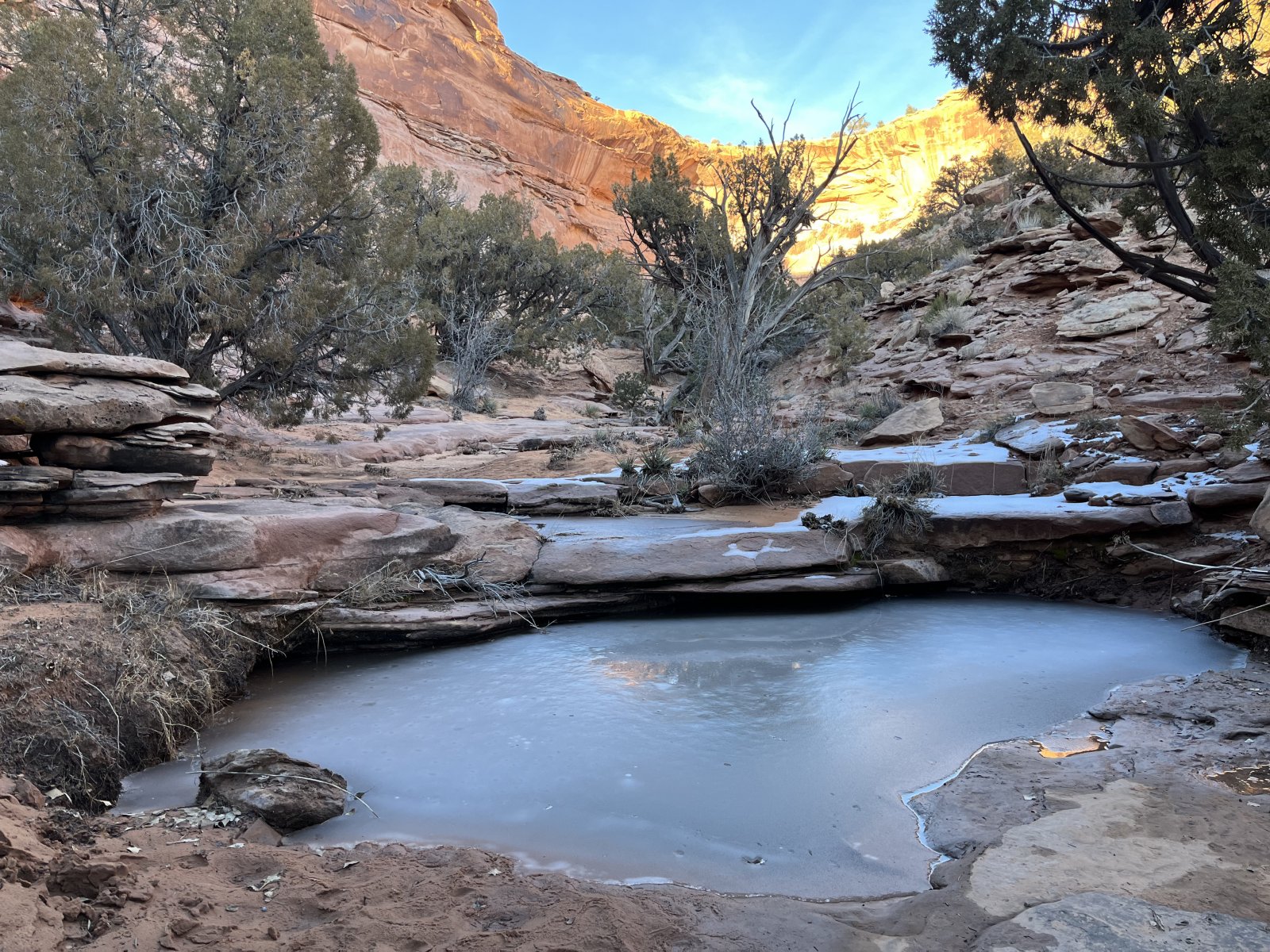 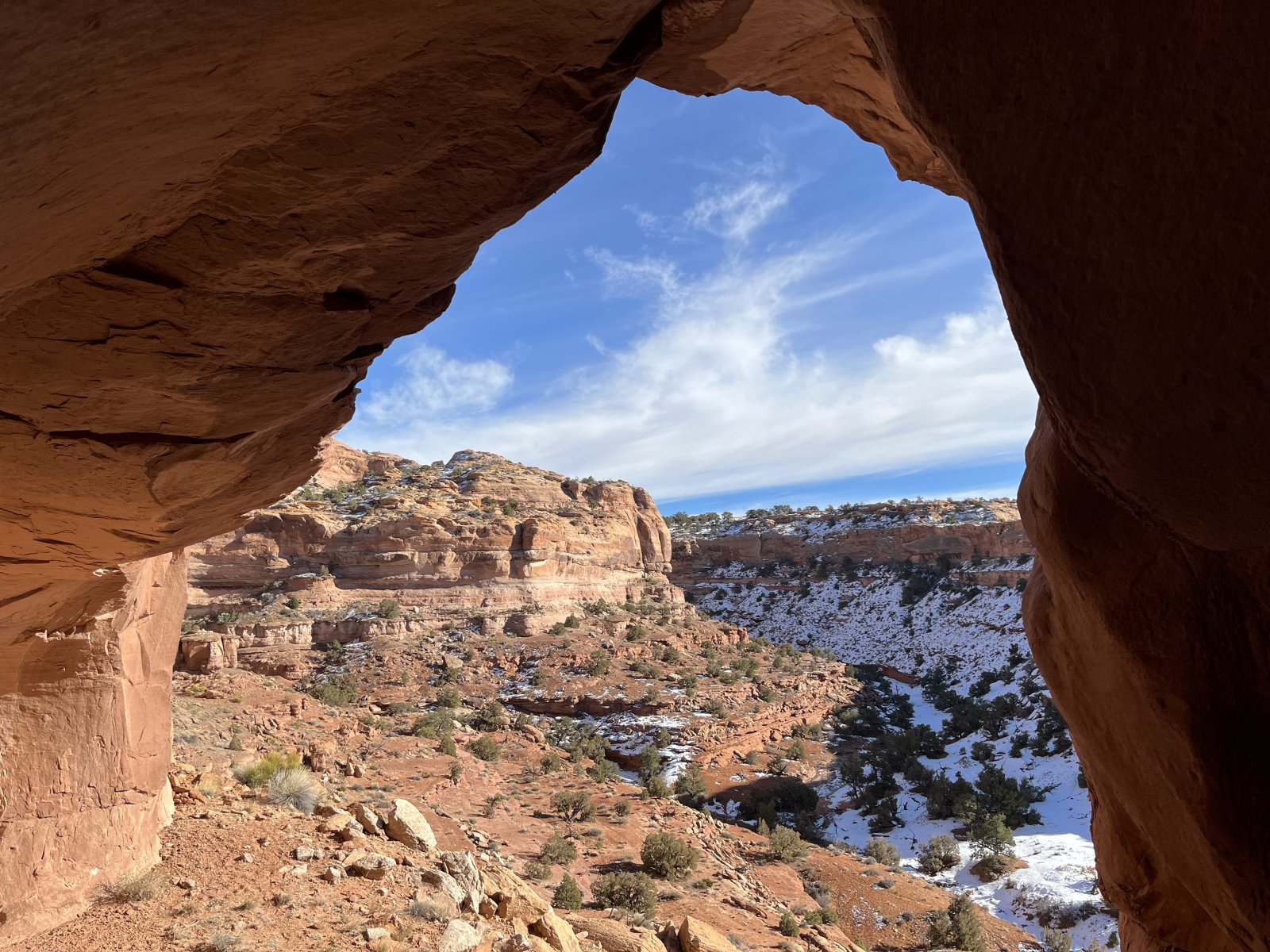 Liked this one where you can see our shadows opposite us. 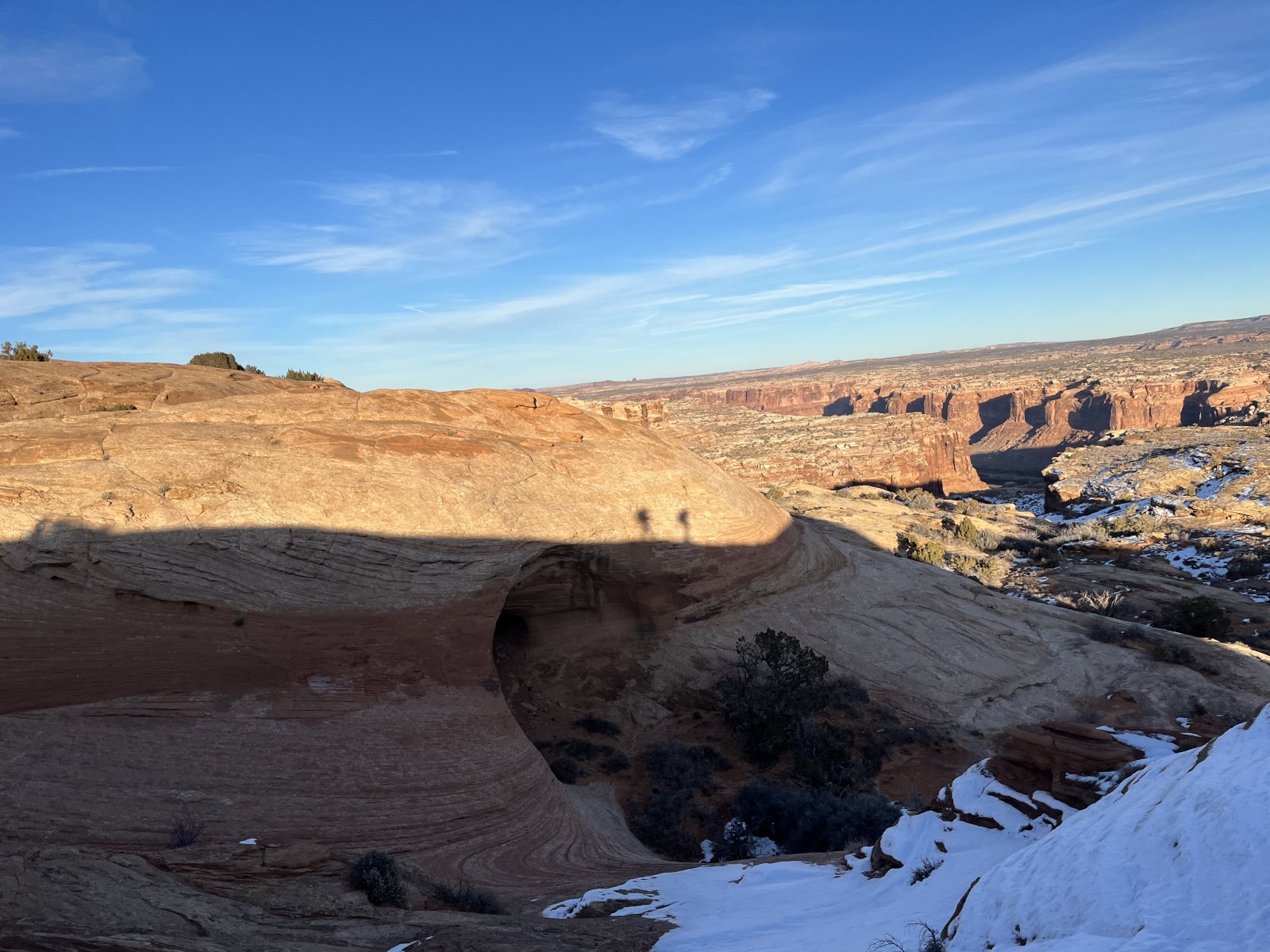 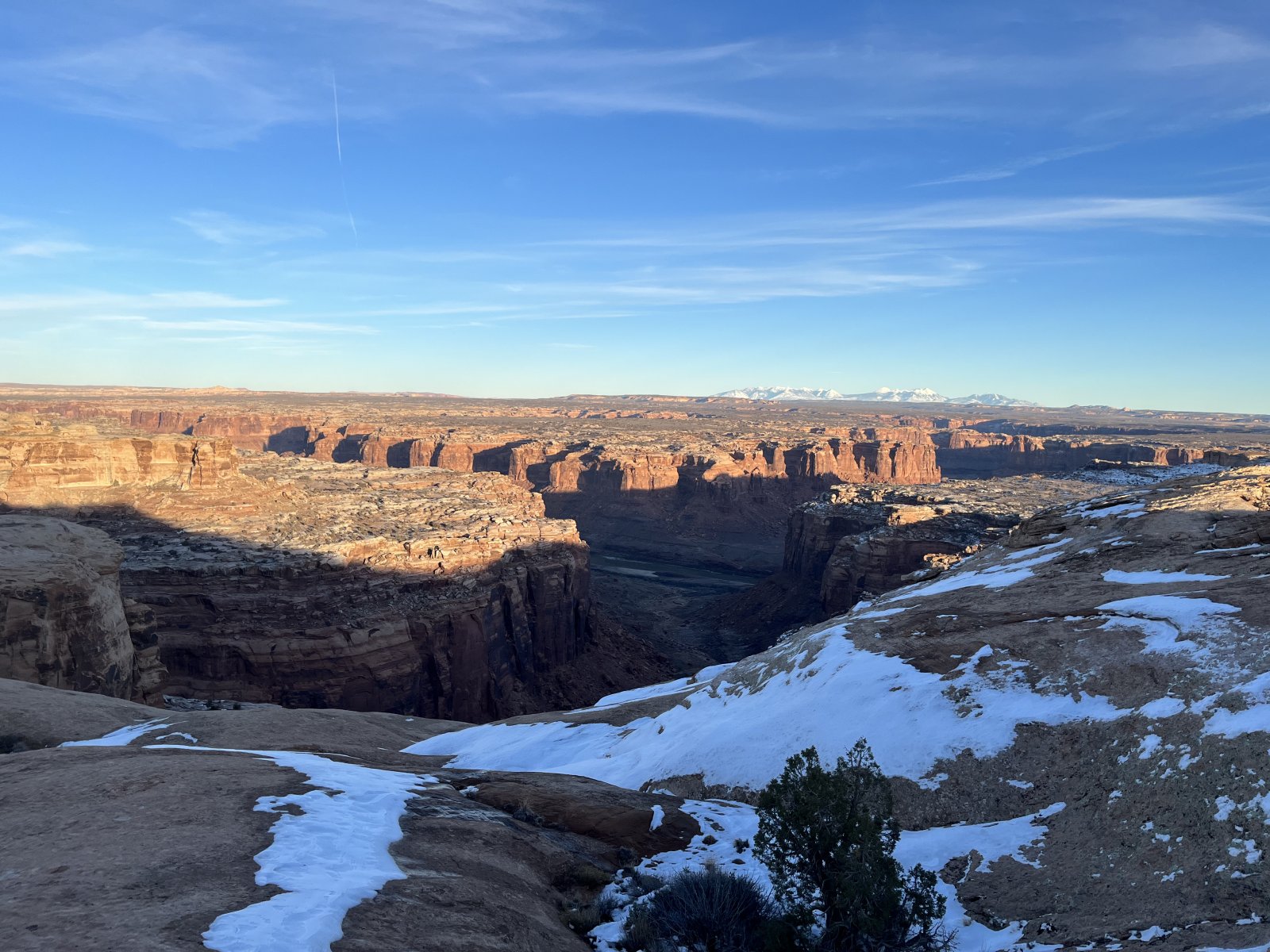 Had to swing by and see a few panels that I haven't seen for years and get this pic in case I never make it back. One was more faded than I remember. 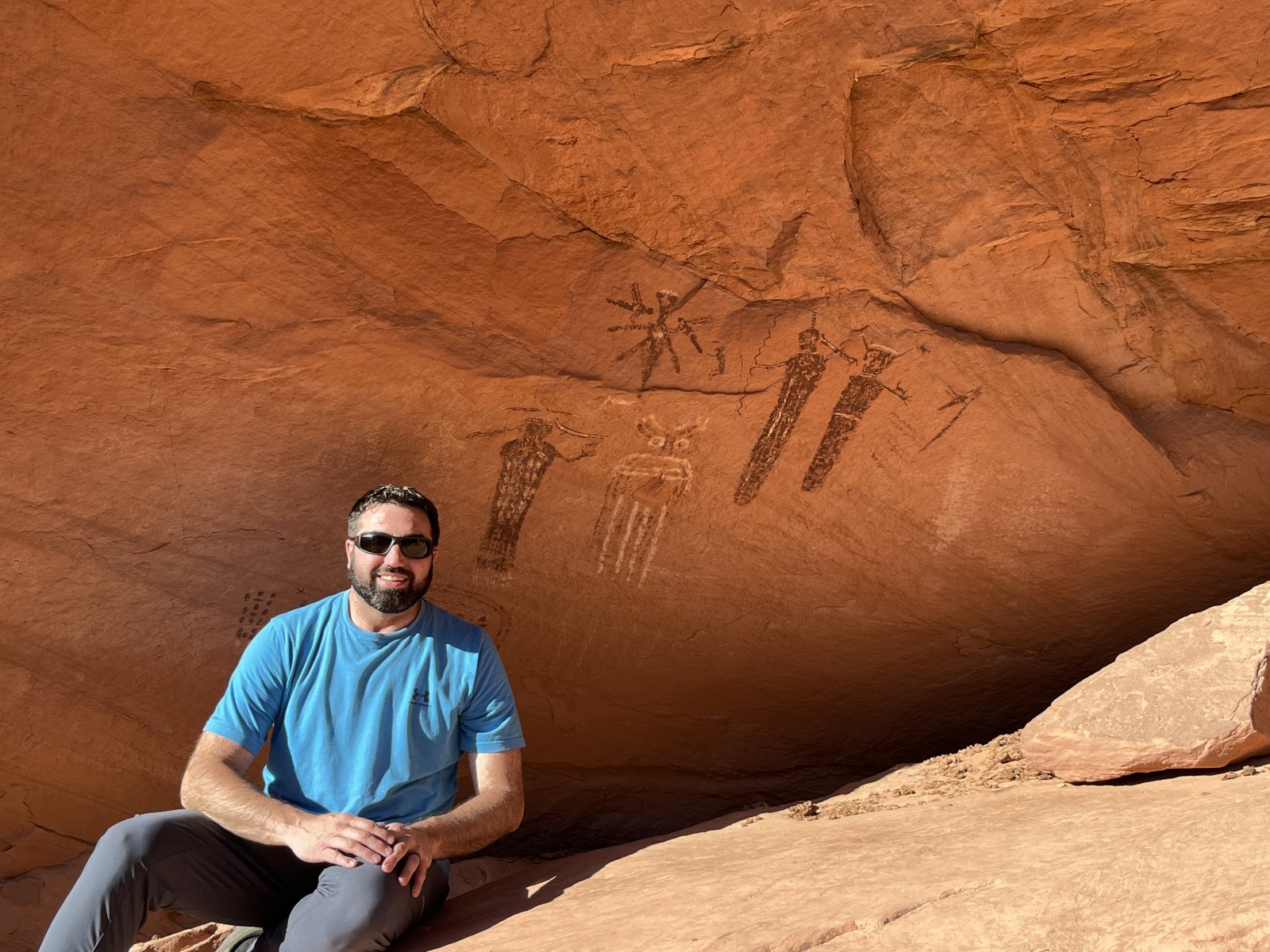 The one major downside this time of year are the long nights. The sun was down by 5:30 and wouldn't be up until around 8:00 am. We both have one man tents, so it was laying there alone for approx 14+ hours. It was some reading, listening to podcasts/music, and a lot of downloaded shows for me. Nothing like getting out into mother nature to have to stare at my phone for 3 hours every night! Made a few snowballs and had a good slushy, and plenty of snacks to enjoy during my movies! That is the one thing I love about non- bear country, eating candy in my tent at bedtime! One thing all the candy helped with was having calories to burn to stay warm through the night. 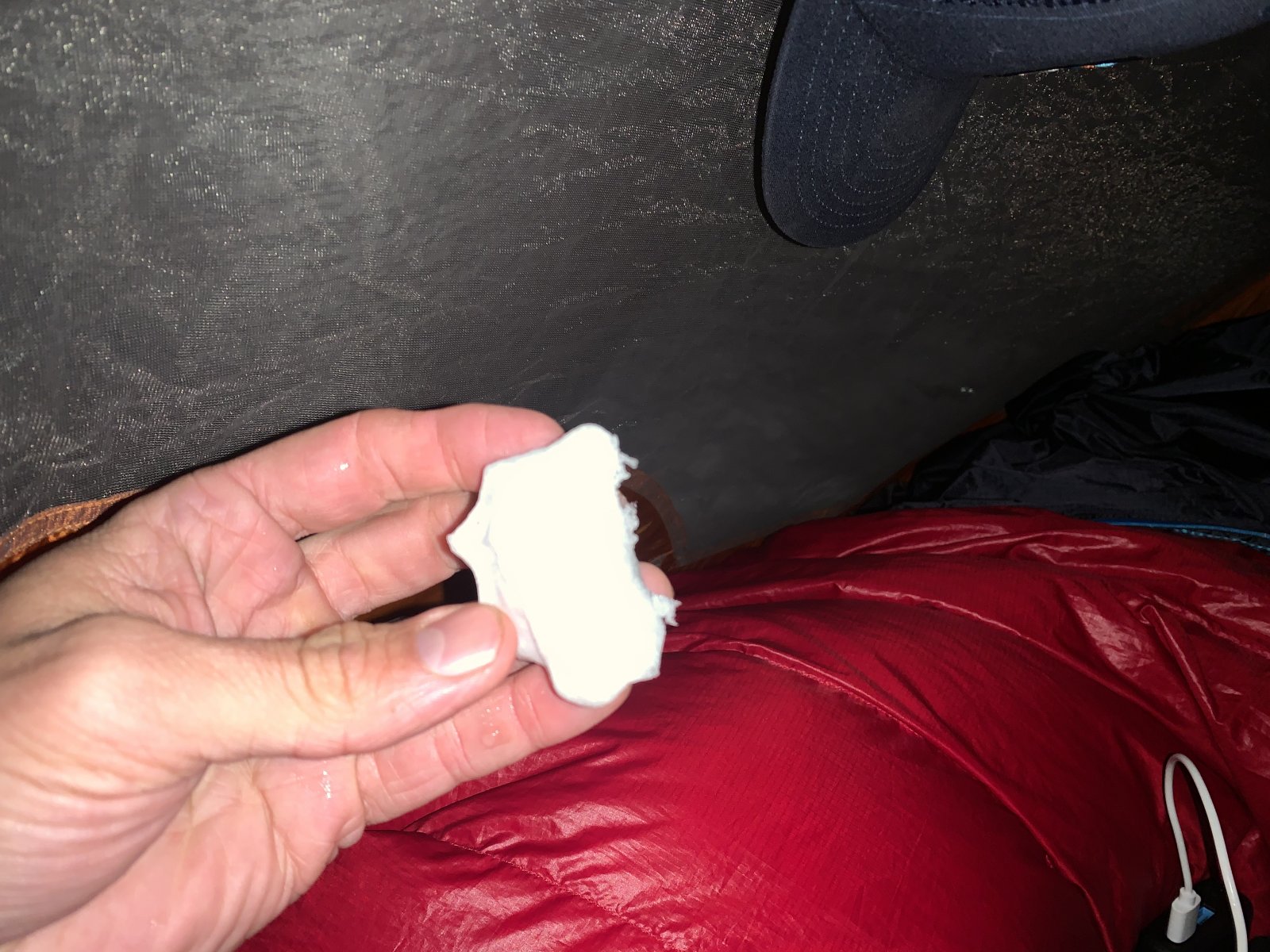 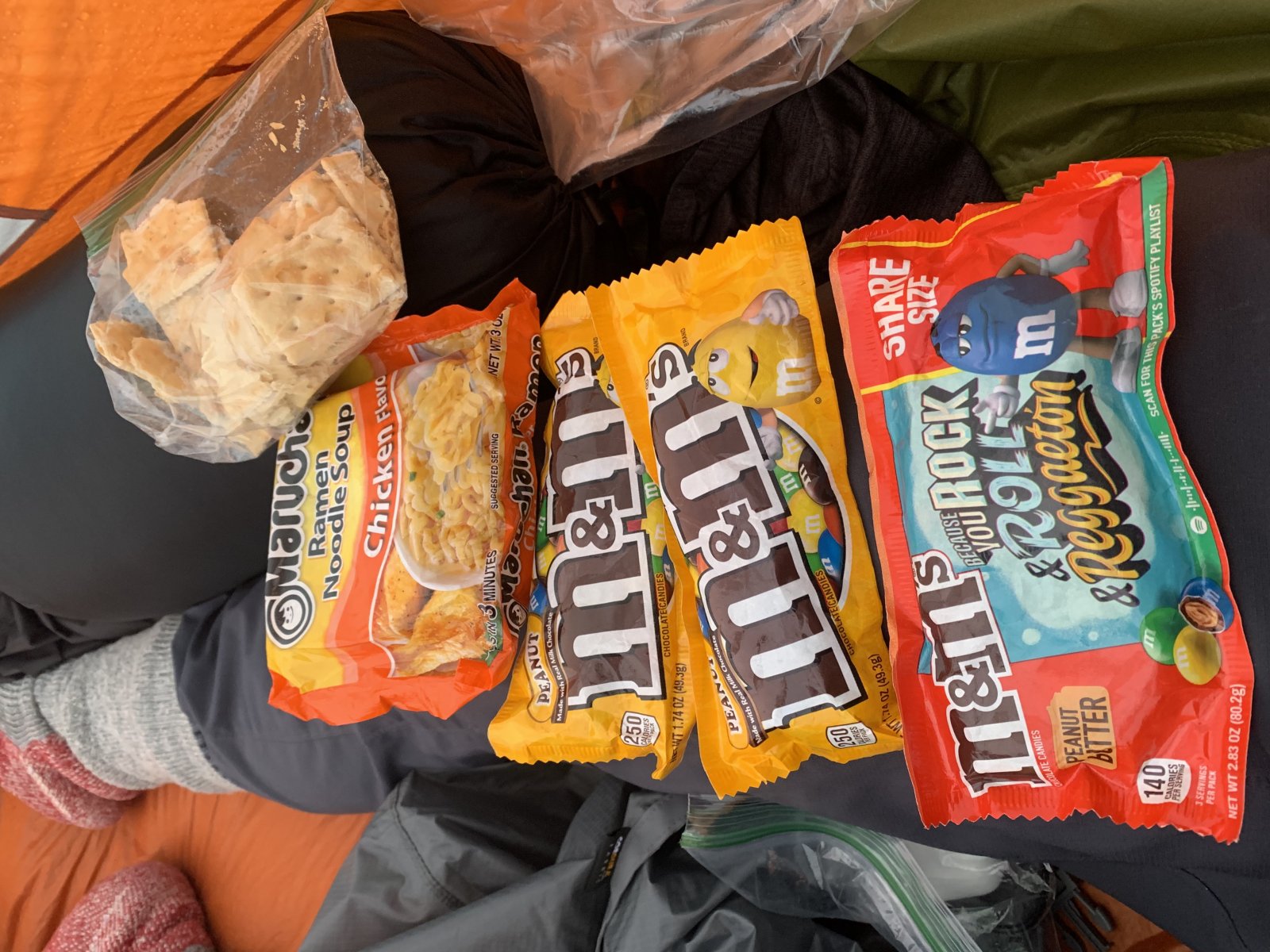 I think these are Mountain Lion tracks in a sandy canyon bottom. They were everywhere along this stretch. Guessing it was dragging its tail that made the line. (sorry, not sure why this pic keeps turning sideways). 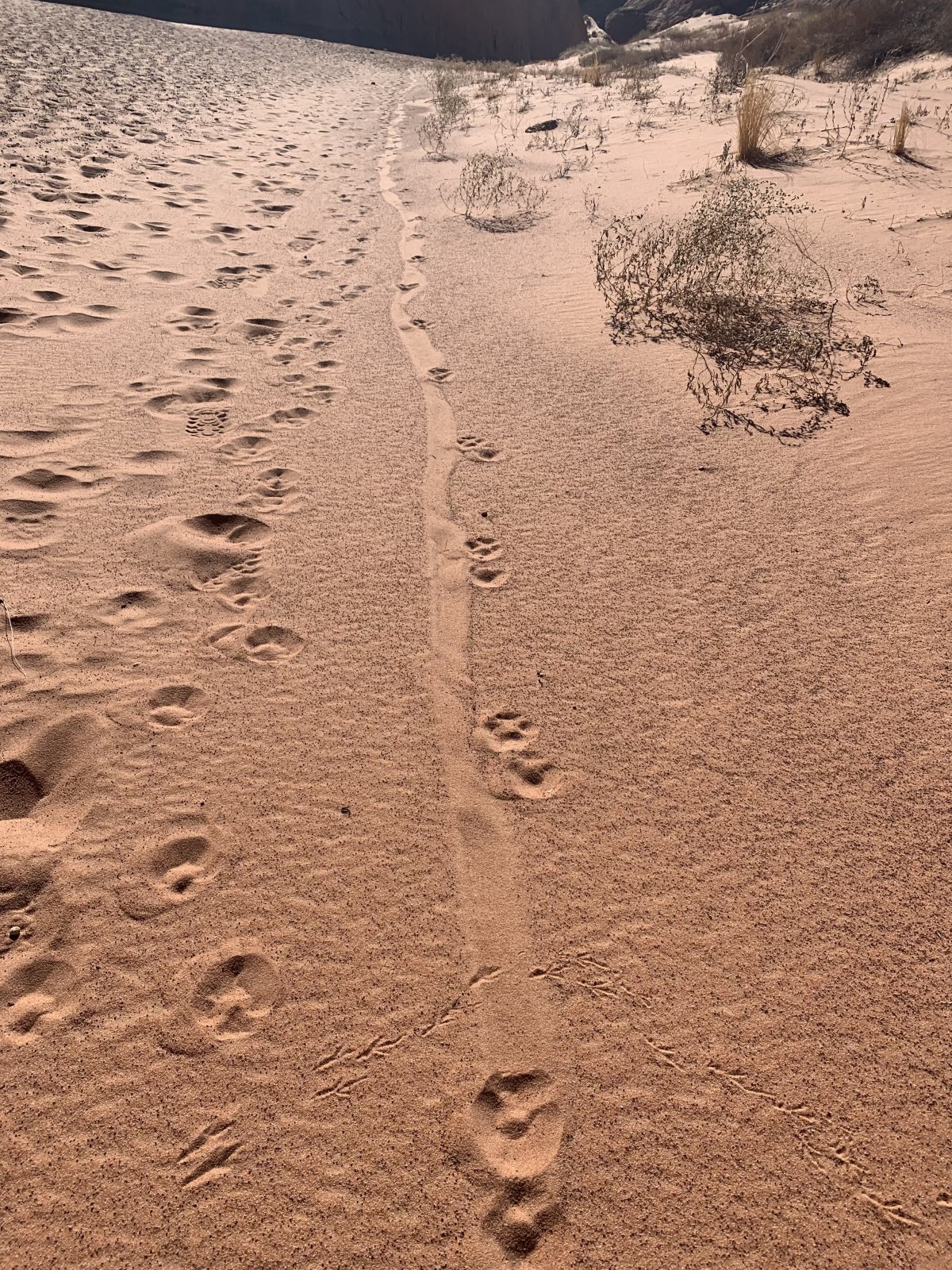 Last few pics on the way out. 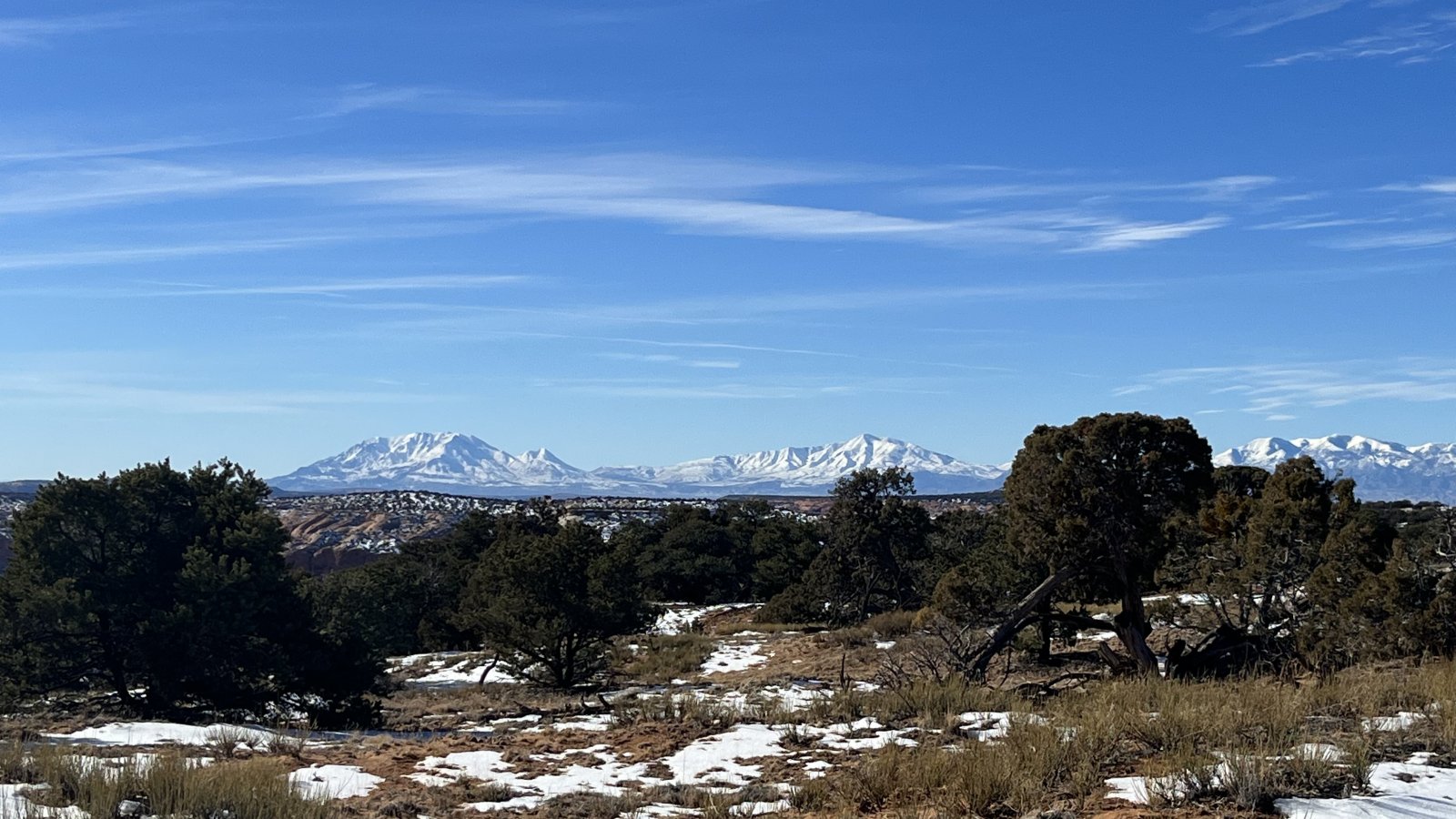 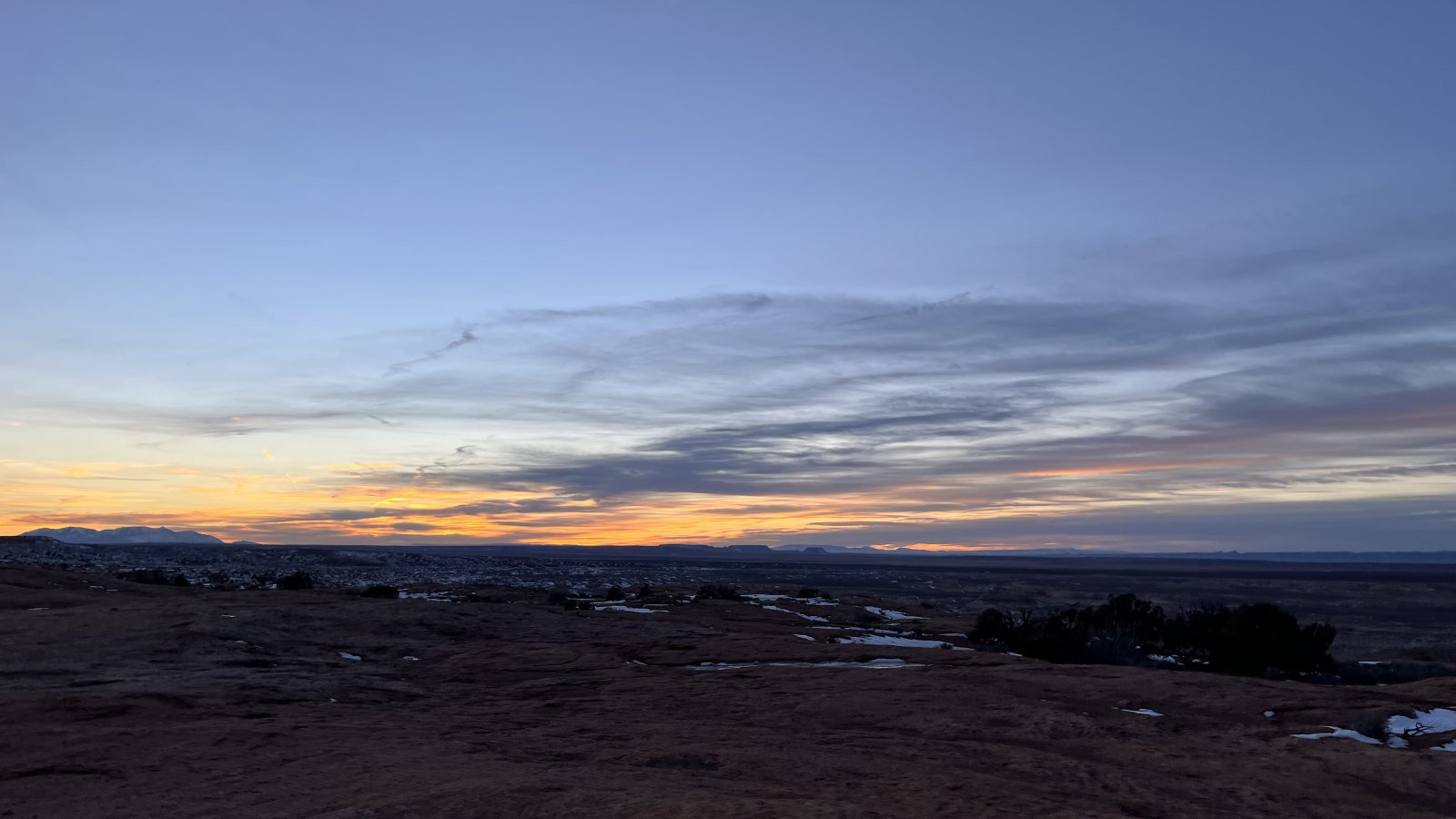 Overall it was a great January trip! Nice to get away for a few days to break up the winter months. We didn't see another person other than the ranger or a vehicle for 4 days. The high temp was 46 and the low at night was 15. One day was miserable as the wind wouldn't stop. Highlight one night was hearing a couple coyotes barking and howling at each other. Not the same as hearing the wolves in slough creek, but pretty cool. The roads were great early in the morning when they were still frozen. But once it warmed up they were awful! We only had one day when we were moving the car a few miles that this was a problem. It doesn't matter how good your tires are when they are caked with mud and clay!

Nice trip and it may even be the first 2022 TR (involving backpacking in 2022). Yah, the nights are super long. The wind is our biggest challenge in the winter and late fall, when it’s cold.

You remind me, we need to get out there one day. Thats pretty remote in the winter, if you get stuck and do need recovery. I wonder, if tow companies even come out there in the winter? (A few years ago a BCP’er was buried good in blue clay in a complete different area very far from there. The recovery companies wouldn’t even come out. He eventually got pulled out by another vehicle traveling by.)

Very cool photo of the tail dragging. Here’s the photo (on your phone, hit edit, click rotate only once so it looks wrong, then save. Then click edit again and rotate till photo is vertical, save again. Upload). 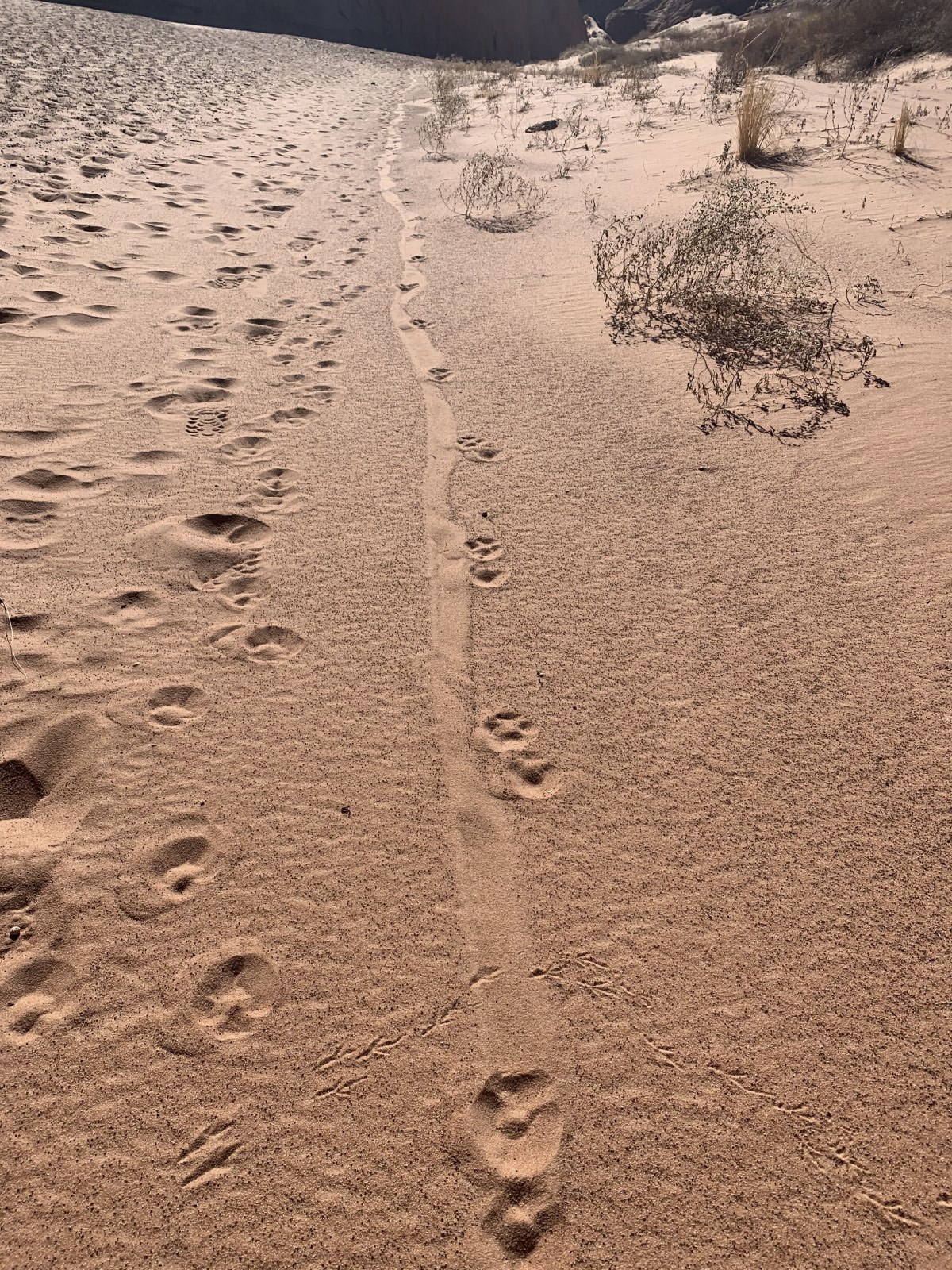 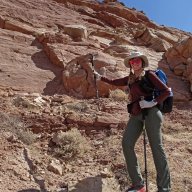 Kerrie at Thru We Go

Really enjoyed your trip report. I wasn’t sure where it was until I saw the rock art panel . Not a very well known area. Really interesting about the mountain lion dragging it’s tail, I don’t think it is very common to see that. Your trip report reminds me to head out in the winter. Thanks.
Thru We Go Wordpress site: https://thru.live/
Thru We Go IG: Instagram.com/thru_we_go
FB: Facebook.com/KerrieNeet

Its great that you can just drive south and get better weather. Very cool tail drag track. I can't think of anything else it could be. Thanks for the winter report.
Tim V.

@Titans . Thanks for the tip on the photo- I fixed it. Yes I don't think a tow truck would have come out. Would have needed another vehicle once it dried out a bit.

@Kerrie at Thru We Go Thanks, and yes, I was vague on purpose. That is one of my top 5 panels due to the detail. A thread earlier this year on BCP gave me the idea to revisit it. It didn't disappoint.

@Tim Valentine Thank you. The interesting thing is how long of a distance that mark is, but its all we could think that it could be as well. Figured someone on here may know. 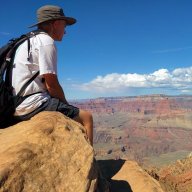 A great trip report ... I really enjoyed the photos of Southern Utah in winter

Of course, a simpler explanation could be that the line was created earlier in the day, by one of the famous uni-cycling coyotes, that often frequent this area, in the off-season

I am changing my opinion. I think Trailscot is on the right track....pun intended. The mountain lion (or bobcat or even coyote? )may have been dragging a thick snake. Probably not warm enough for a snake to have been out and about but it sure fits the profile of the track. Maybe the young inexperienced lion found the snake hibernating in a small cave.
Tim V.

@Outdoor_Fool is always my go-to when I'm not sure about an animal track or scat. Wonder if he has any insights on the tracks and line.

I'm also wondering if it had something in its mouth that was dragging. That would explain the paw prints on top of the line, and also why the line is generally to the side of the prints.

Looks like a really great trip, thanks for posting.

These tracks are hard to determine. At first glance, they seem too roundish for a coyote but a coyote dragging something will likely be spreading its pads a little wider and anything in the soft sand will have its pads spread a bit. Also, in that sand, the claw marks of a coyote would likely not show, at least not for very long.

Hm-m-m, I would have to speculate that it was dragging a prey item that was not very large, just large enough to reach the ground and then some. Having spent a lot of miles tracking them, I can say that mountain lions typically don't drag their tail as they walk although there is always an exception. I never saw where a lion dragged its tail but I won't say it never happens. Having one drag its tail that far would be really unusual, though. And as was mentioned, a dragging tail would have really obscured some of those tracks.

Do you remember how wide the tracks were? 1+ inches or 2.5+ inches? In the soft sand the tracks will appear larger than the the actual foot size so may be hard to be accurate.

If the tracks were in the smaller range, then I would guess a bobcat/coyote dragging a hare or similar, As much as coyotes like to scavenge, it could have been a coyote dragging the partial hide of a deer also. If larger, a lion dragging part of a deer.

Great feedback on the prints from everyone, Thanks! That's why I love this site. As we looked at the prints out there we were pretty sure it was a lion, primarily because of the size as @Outdoor_Fool mentioned. You all convinced me, that it was most likely prey making that mark. That would have been something to behold- seeing a Mountain lion carrying prey running through the canyon! I could cross that off the bucket list- I've never seen a lion while out backpacking. Saw one as a kid hunting with my dad across a ravine with a spotting scope, but thats it. Anyone seen one backpacking or hiking? I imagine its a cool and scary experience!

CodyL said:
Anyone seen one backpacking or hiking?
Click to expand...

I saw one in the Warm Springs meadows area of the White Clouds about 30 years ago. We were awakened by a pair of yapping distressed coyotes a little before dawn, crawled out of the tent and sat down in the middle of the meadow waiting for first light. Ten to 15 minutes later we saw the 2 coyotes just outside the trees lining the meadow, all their attention was focused in the trees as they moved along. A minute or 2 later, a mountain lion appeared out of the trees and then weaved in and out of the trees as it slowly moved along. We were able to watch it for nearly 10 minutes total.

Another time, in the Bridger Range, I was hiking down the ridge headed back to camp for the night when I spooked a female and 2 youngsters. They ran down the ridgeline a couple hundred yards then disappeared into the trees.
You must log in or register to reply here.
Similar threads