Sleeping with Pfieff, Maybird in May, or Summer -Winter Backpacking

I am fighting a cough and fever. So maybe the Nyquil will rear its face in this report.

On Friday, May 31 with soccer finally over and releasing its grip on my time. My friend and I slipped out of work early with eyes on Maybird.
We made good time to the first split in the trail and went across the snowbridge for the last time in the season, at least a little apprehensively. The creek was frothing and gushing noisily below our feet. 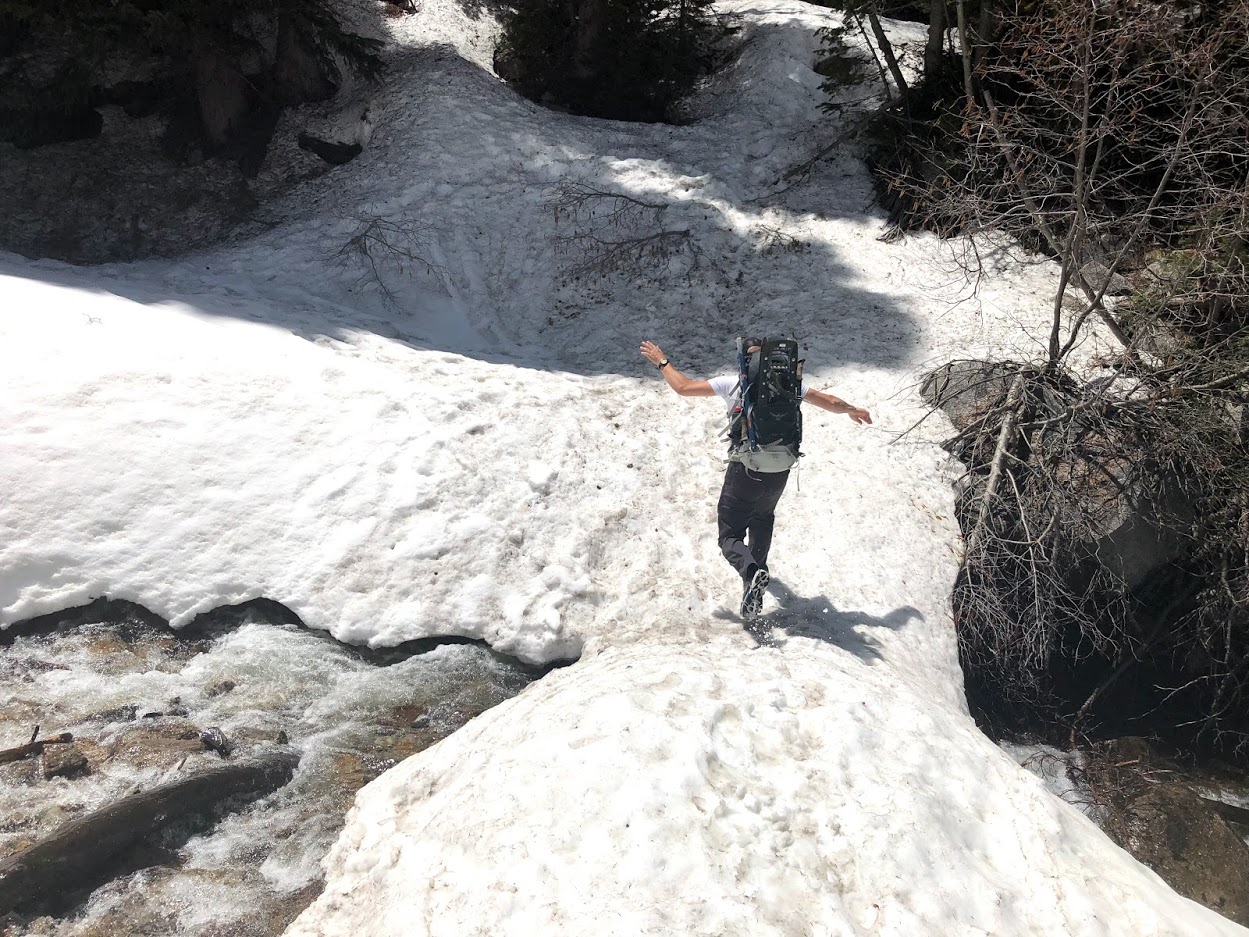 There were some unpleasant patches of steep snow for the next mile or so that slowed us down a little as we had to scramble over the aspens bent down on the trail from the never-ending snow.
Eventually however, we hit a nice spot in the sun and broke out lunch. Kind of a trail Monte Cristo... french toast, ham, monterey jack, maple syrup butter and apricot preserves. It was good. 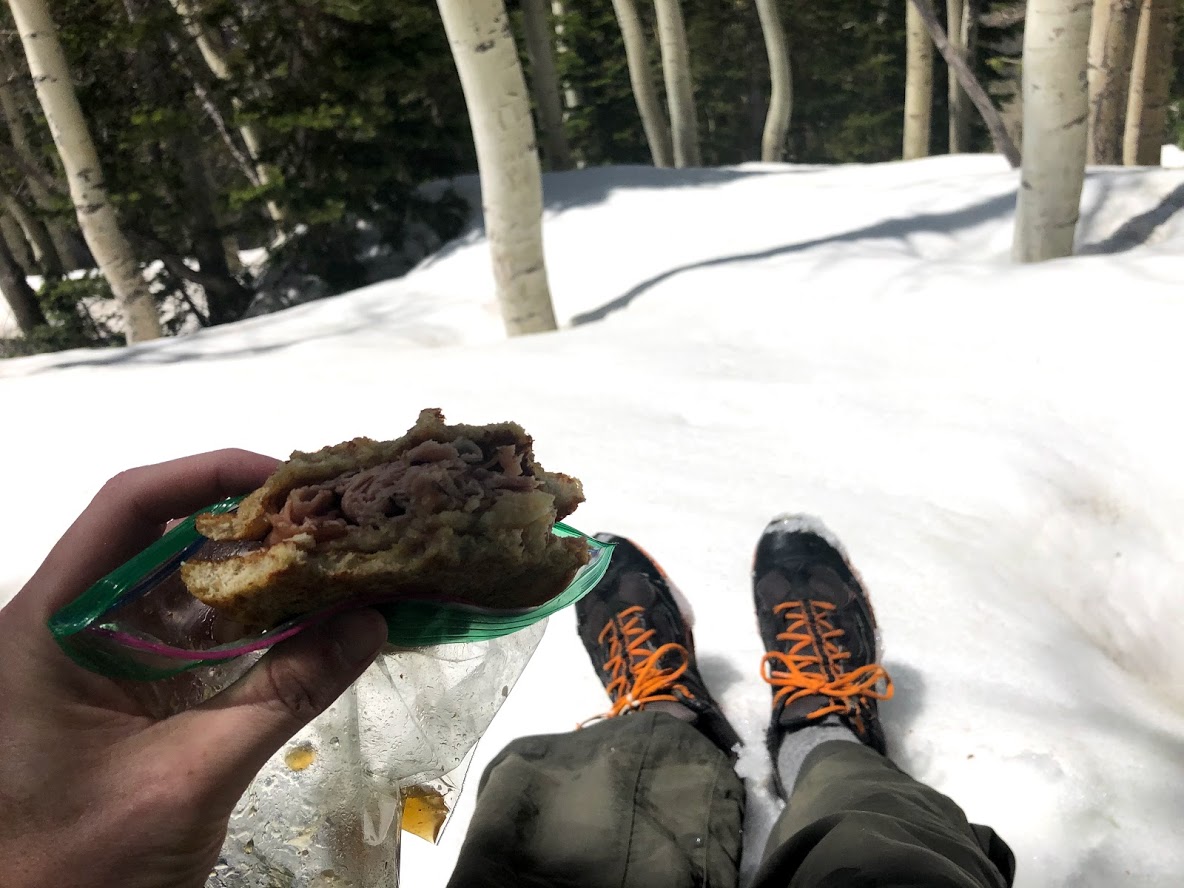 I keep saying I am going to retire my Tecnica's from their winter hiking duties, and this may really have been the last trip for them.

We made the climb and the over and up to Maybird with our snowshoes on. The afternoon snow was like pina colada slurpee slush. We heard sloughing all around us as the fresh snow from that week was slipping down the steep and sunny apertures. 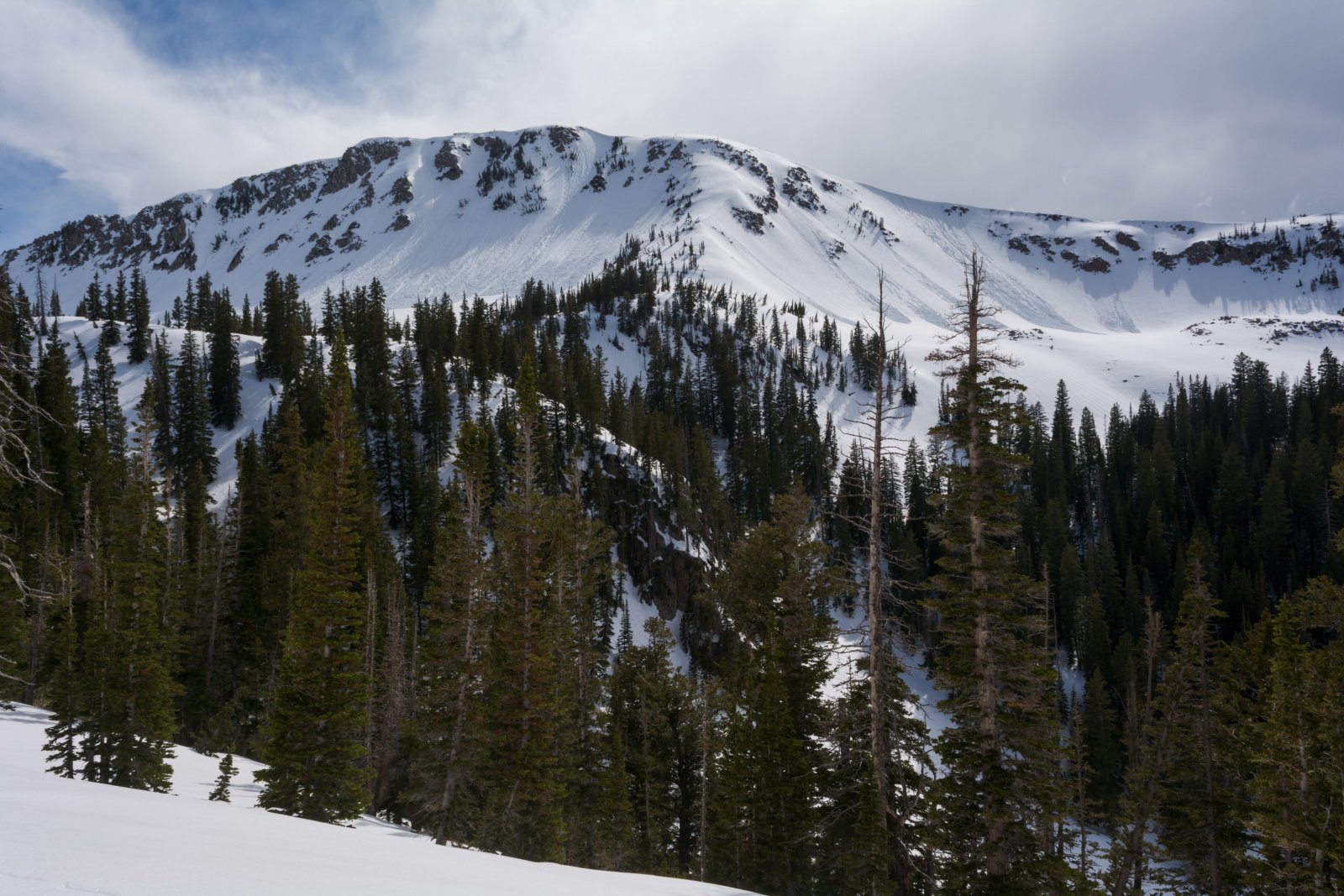 Last time we had made for Pfiefferhorn, she had remained in the clouds. Today she came into view. I love that view.
We were walking virgin, slurpee snow the last day of May. It was blinding and wonderful.
Birds and squirrels called all around us in the pines. 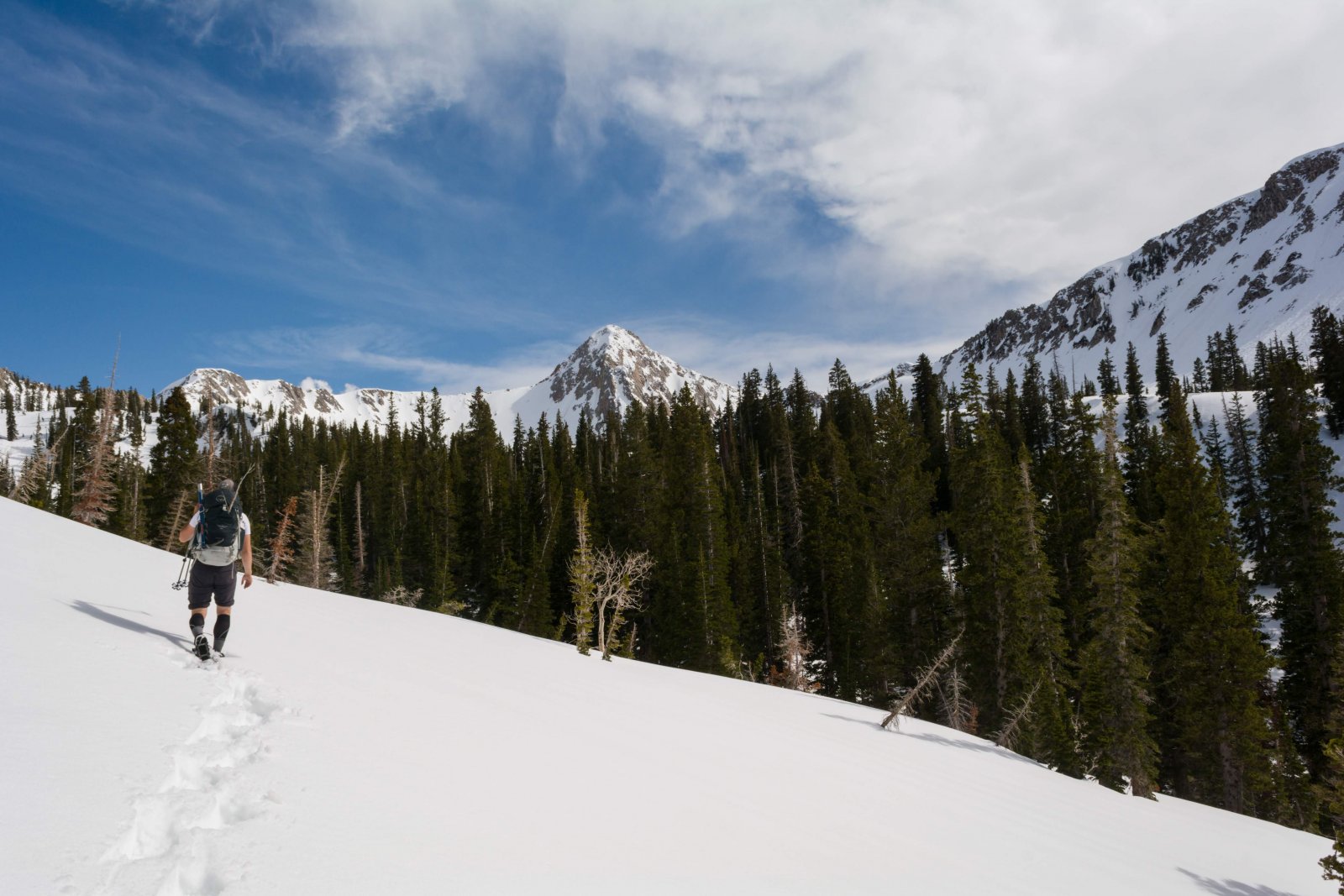 However, clouds were gathering and the forecast was proving correct.
We found a good sheltered spot, just up from the tarns that were buried under feet and feet of snow below and setup camp.
The sun went away and the wind picked up.

We sat down with a view of Pfieff, broke out the little stove and the new grill that I had just purchased and pulled out a steak. I had thought I had grabbed one of the NY Strips from the freezer that I had pre-seasoned with Montreal Steak, but alas, EVEN BETTER, I had grabbed a Ribeye from my birthday dinner!
We skewered it up and cooked it nice and medium rare while taking in the views. 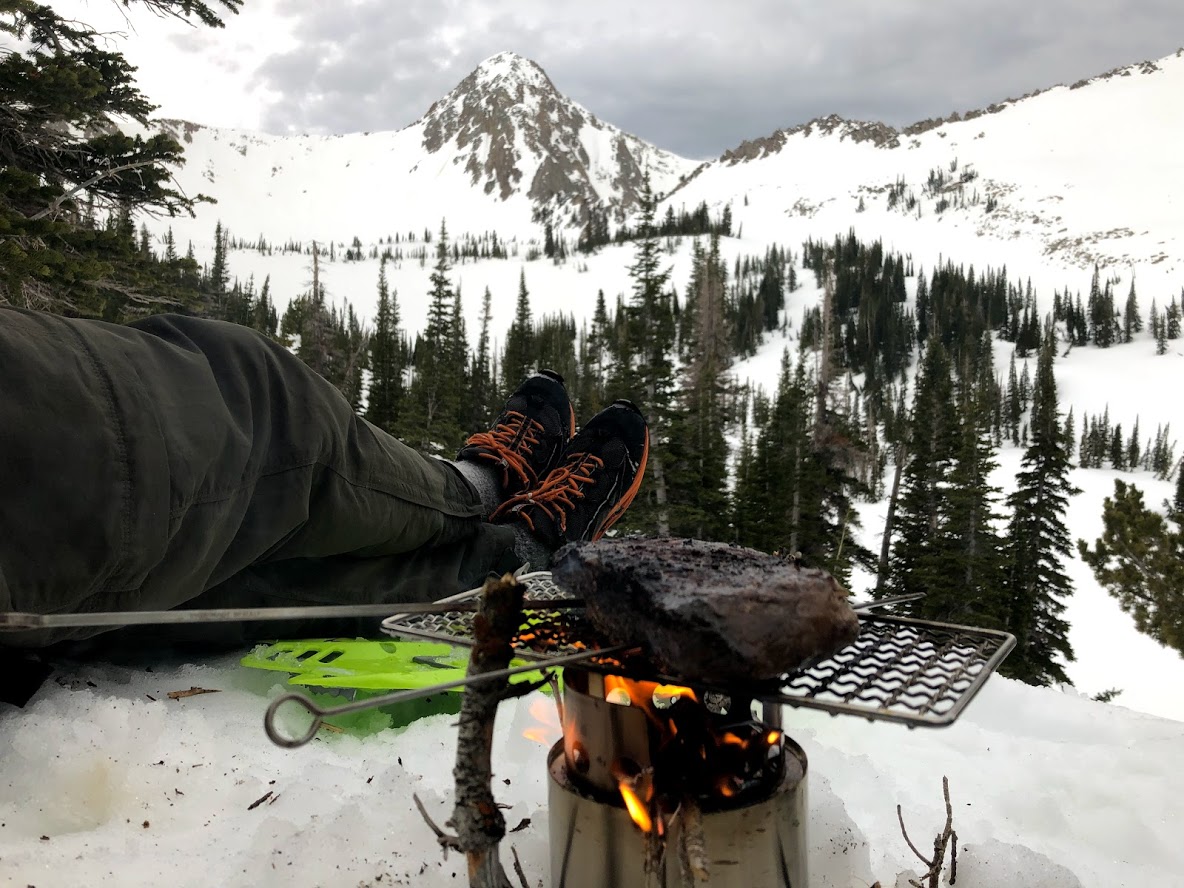 The last of dinner was enjoyed as thunder started to boom around us. My soaked feet were freezing at this point. So I cleaned up quickly and went to the tent where I put on my down booties and listened to the thundersnow as it pounded us. Lightning cracked and lit up the sky overhead. It went on and off for a while. Sometimes grapple, sometimes rain, sometimes snow. On it went into the night.
I slept with my arms out of my sleeping bag and the door partway open. Low thirties are pretty balmy for snow camping.

Dawn came with a little bit of promise.
I wandered down to the tarns and took some photos. We had a couple visitors who had skinned up and arrived right at sunrise and right before the clouds overtook us with heavy snow again and just a few bouts of thunder this time. 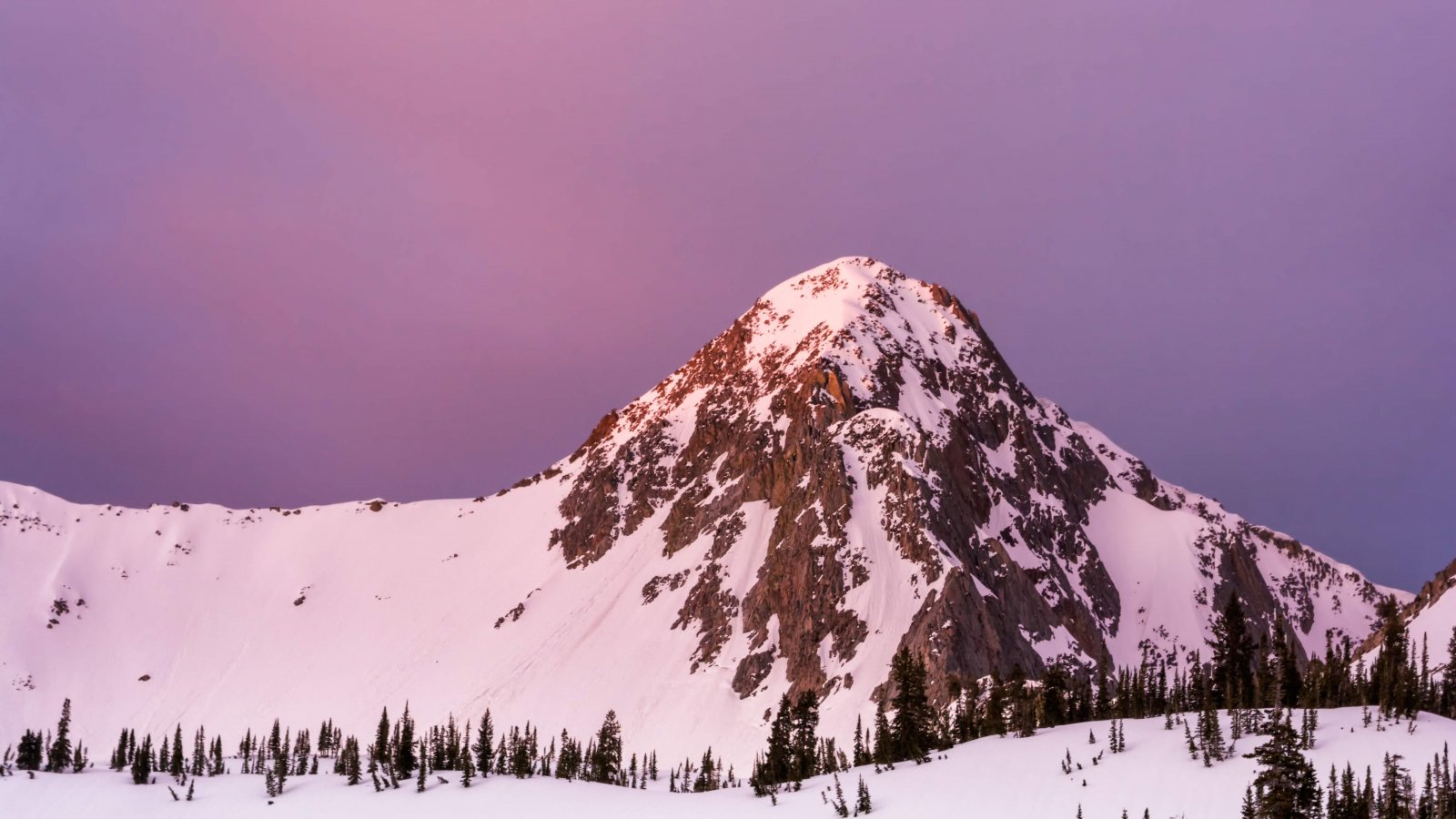 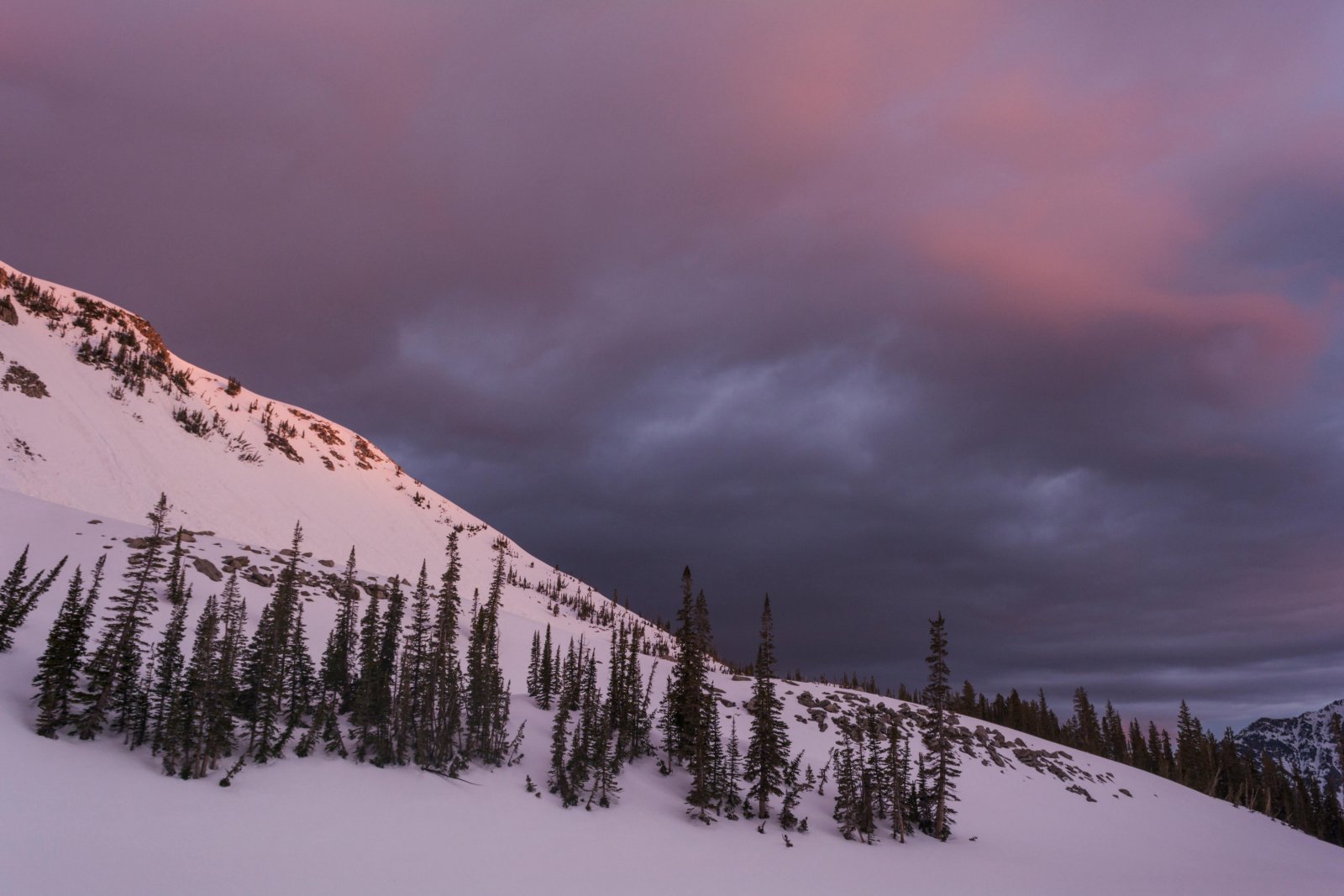 Across the way, Twin Peaks had some good light. 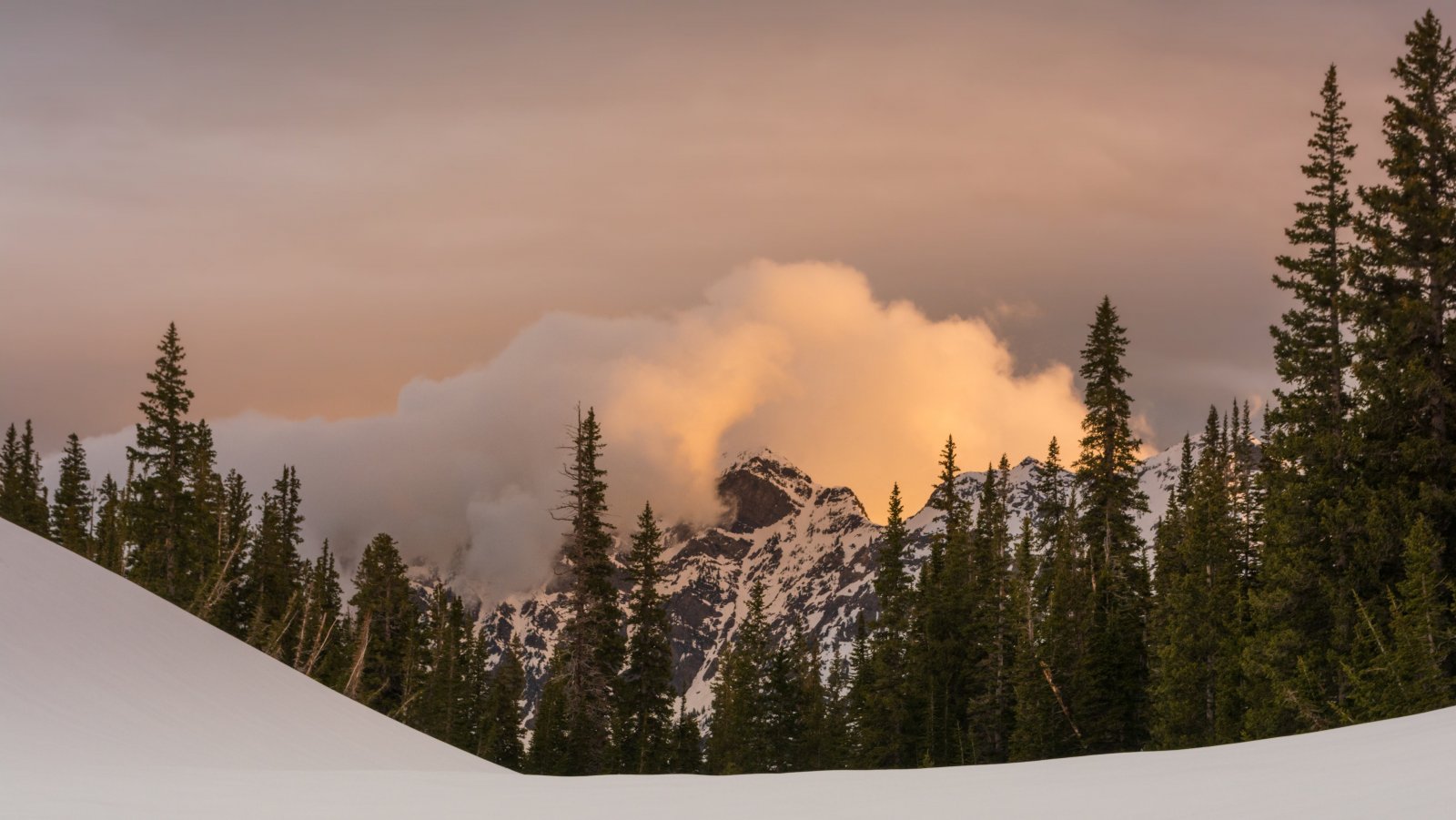 The first little bit of the sunrise hit Pfieff, before clouds swallowed her. 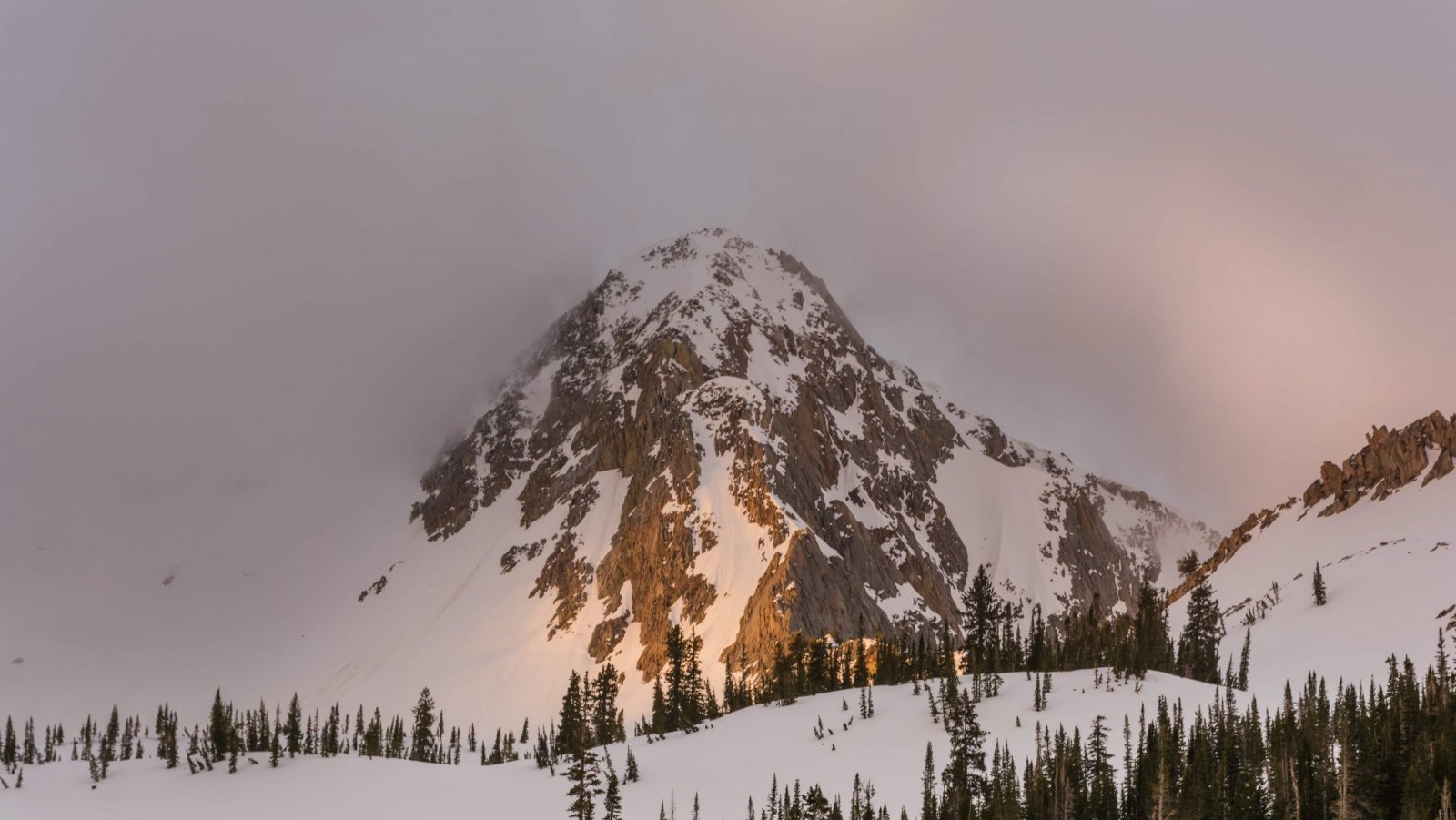 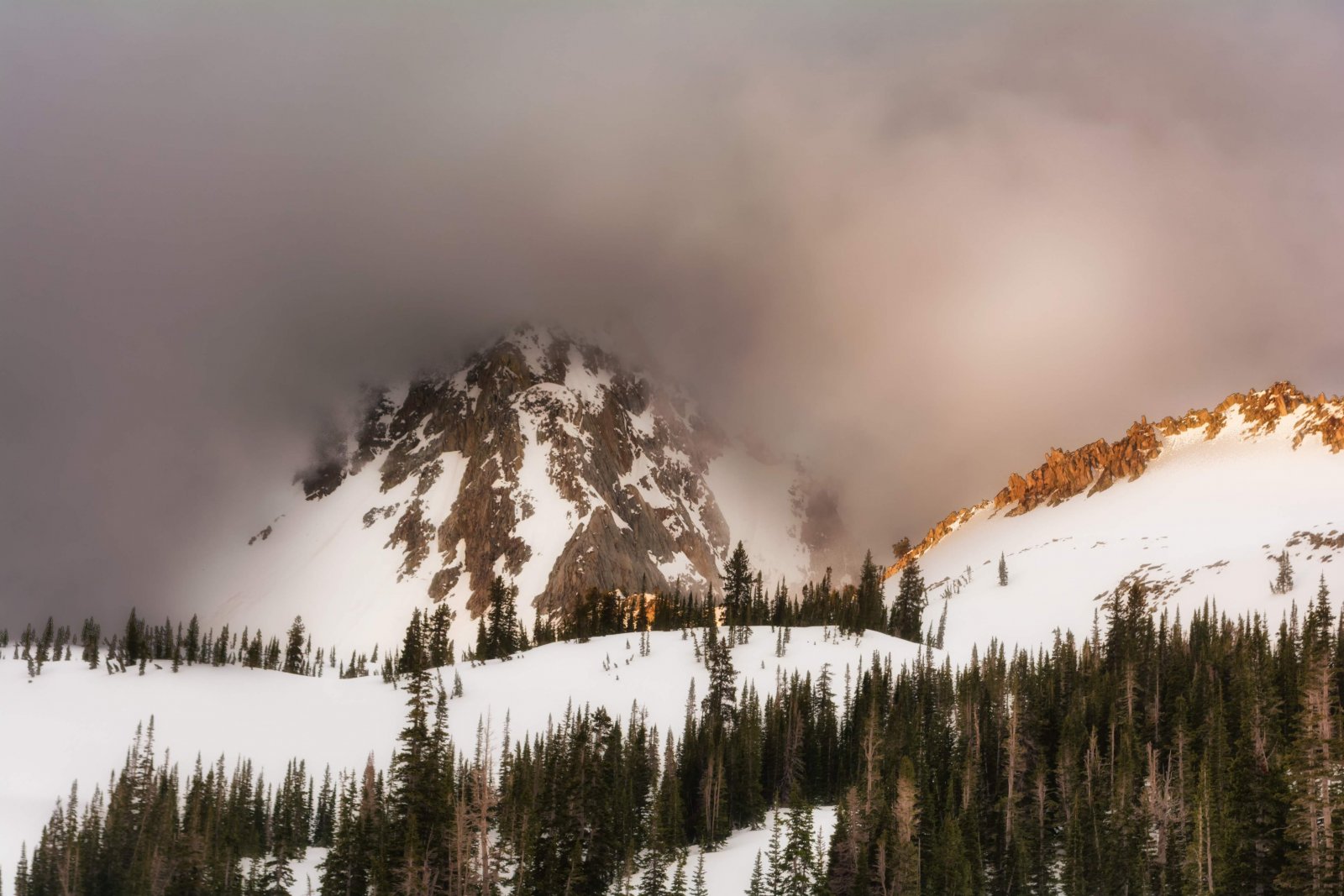 Rain poured down, so we took a short morning nap, waiting for it to break. We had a hard exit time as we were to meet a friend for the Champions League final (my team lost).
So as soon as the weather broke, we were taking down camp and on our way to make it in time. 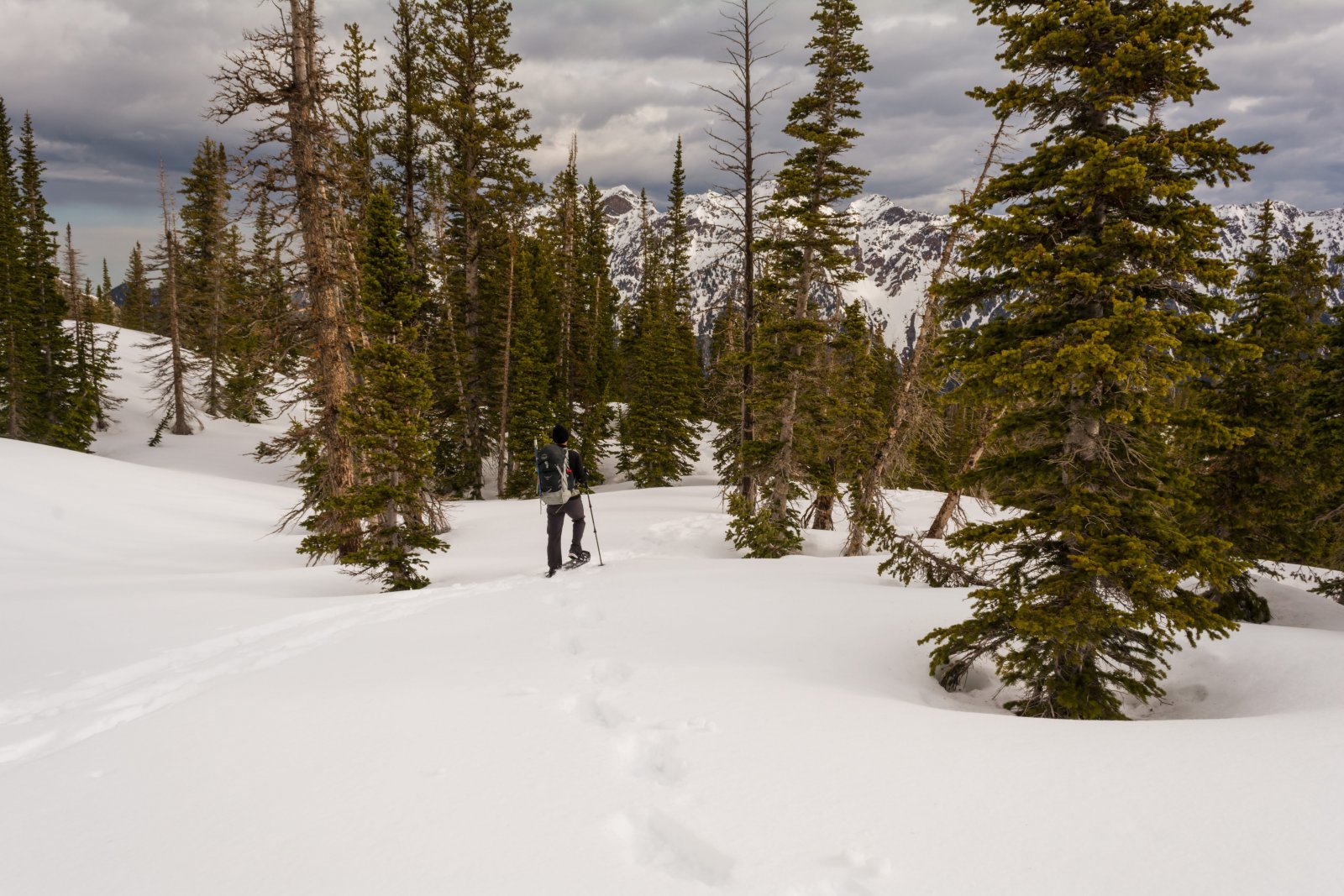 A goodbye view of Pfieff. 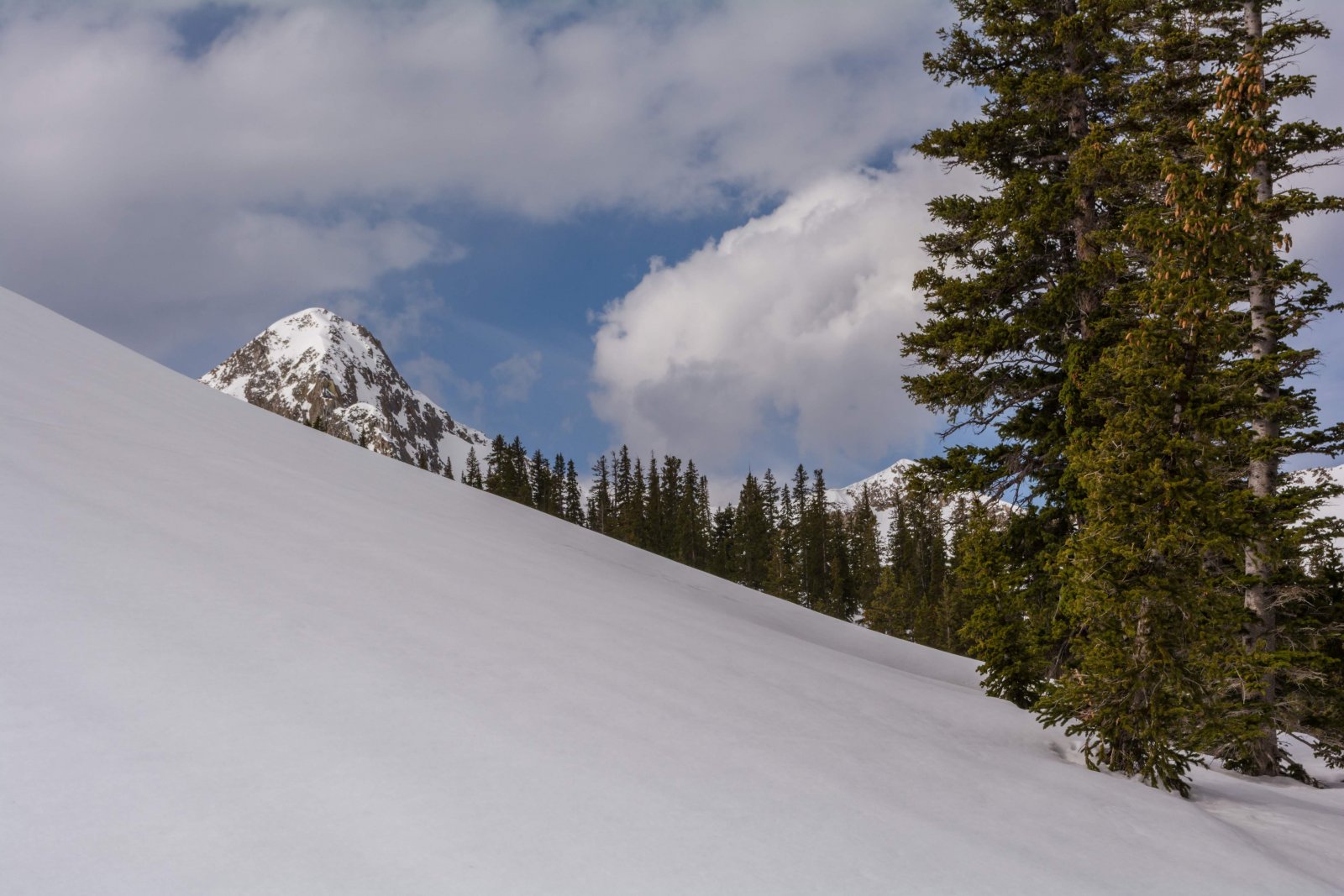 Great scenery and photos capturing it. Thanks for sharing!

Lovely! Thanks for sharing!
Were you using a SoloStove?? Where did you get the little grill top? I love the idea of being able to take a steak with me when I backpack, oh...or lamb!

Miya said:
Lovely! Thanks for sharing!
Were you using a SoloStove?? Where did you get the little grill top? I love the idea of being able to take a steak with me when I backpack, oh...or lamb!
Click to expand...

This is a Solo Stove. It is not ideal to BBQ over, but with a frying pan it may be easier to control the heat. We were low on options, seeing how the ground was five or six feet of snow beneath us.
The grill is Expedition Research Grill. (just learned how to do the hyperlink thing... wow ) It is easier to use where you can control the height or the heat directly- which was hard on the Solo stove. I got the grill for overnighters and for the Uintas. I like fish in tin foil or skewered, but sometimes I want to just have a little fire of coals and meat. The little one will fit a small steak and weighs <3oz and fits with my cooking kit. The larger one is 7oz, and I keep it in the bag and put it against the back of my pack.

Depending on the temp outside and the thickness of the meat, I will start the hike with a partially thawed to fully thawed steak- vacuum sealed, and put it in my cozy and bury it in the middle of my pack, sometimes with a frozen 8oz drink and that has been good for at least overnight, and depending on the weather even longer. Especially on one or two nights, I really have a hard time getting excited about freeze dried. Those are for longer trips and going lighter. Sliced steak, paired with some hoisin and put on top of a steaming bowl of cheap ramen pho is heaven when you're sitting in the snow.

I have the Solo Stove too and, yes, imagine that using a grill on that would have been less than ideal. However, I like almost all my meats RARE, so I think I could manage. Just drop and then flip and then done!
Definitely going to want to invest in that little grill, especially when I make teeny tiny fires haha.
Thanks for the info!

Beautiful!
You must log in or register to reply here.
Similar threads