I just re-read this and decided to put the pictures first so no one had to read my embarrassing story. 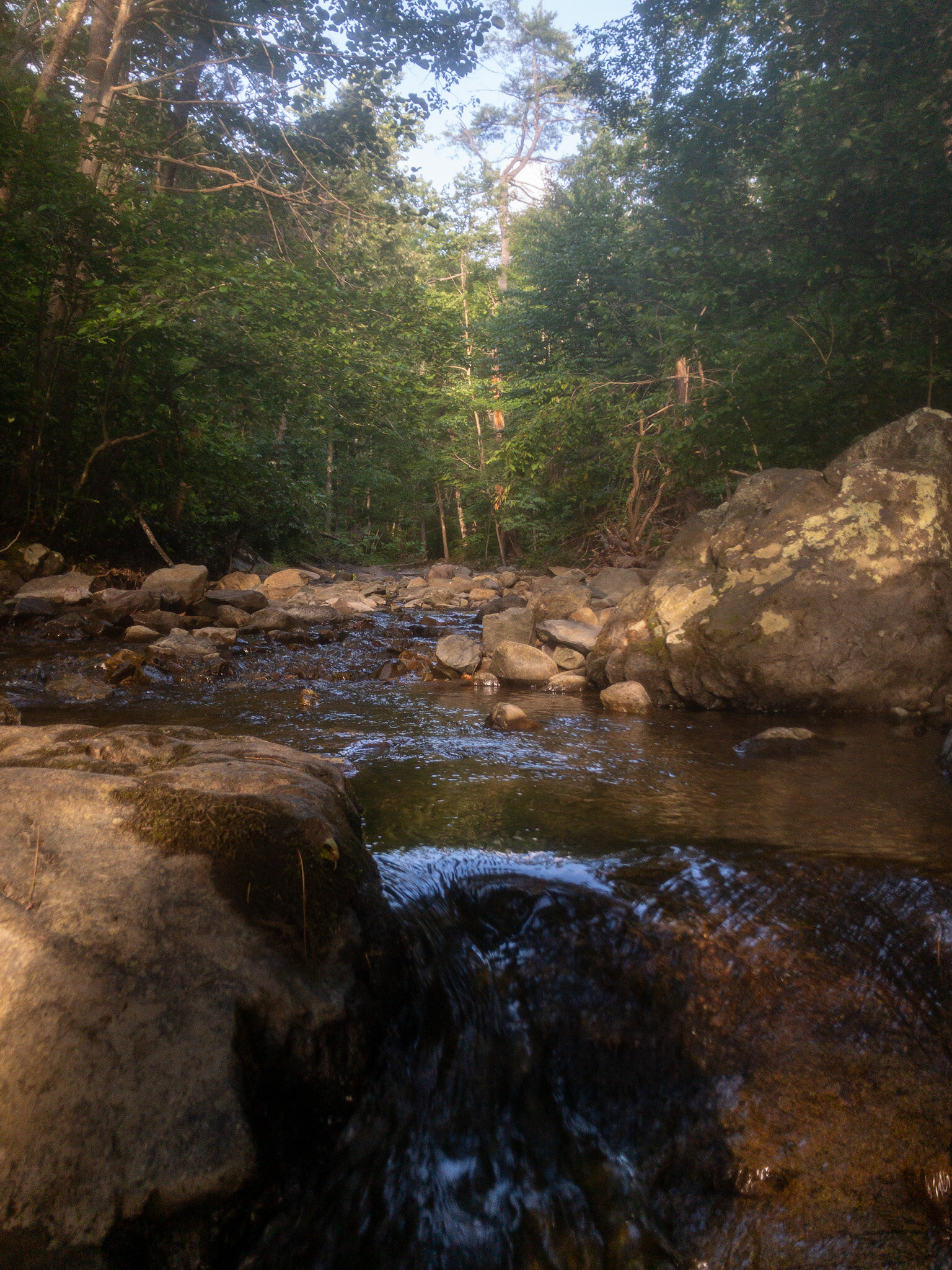 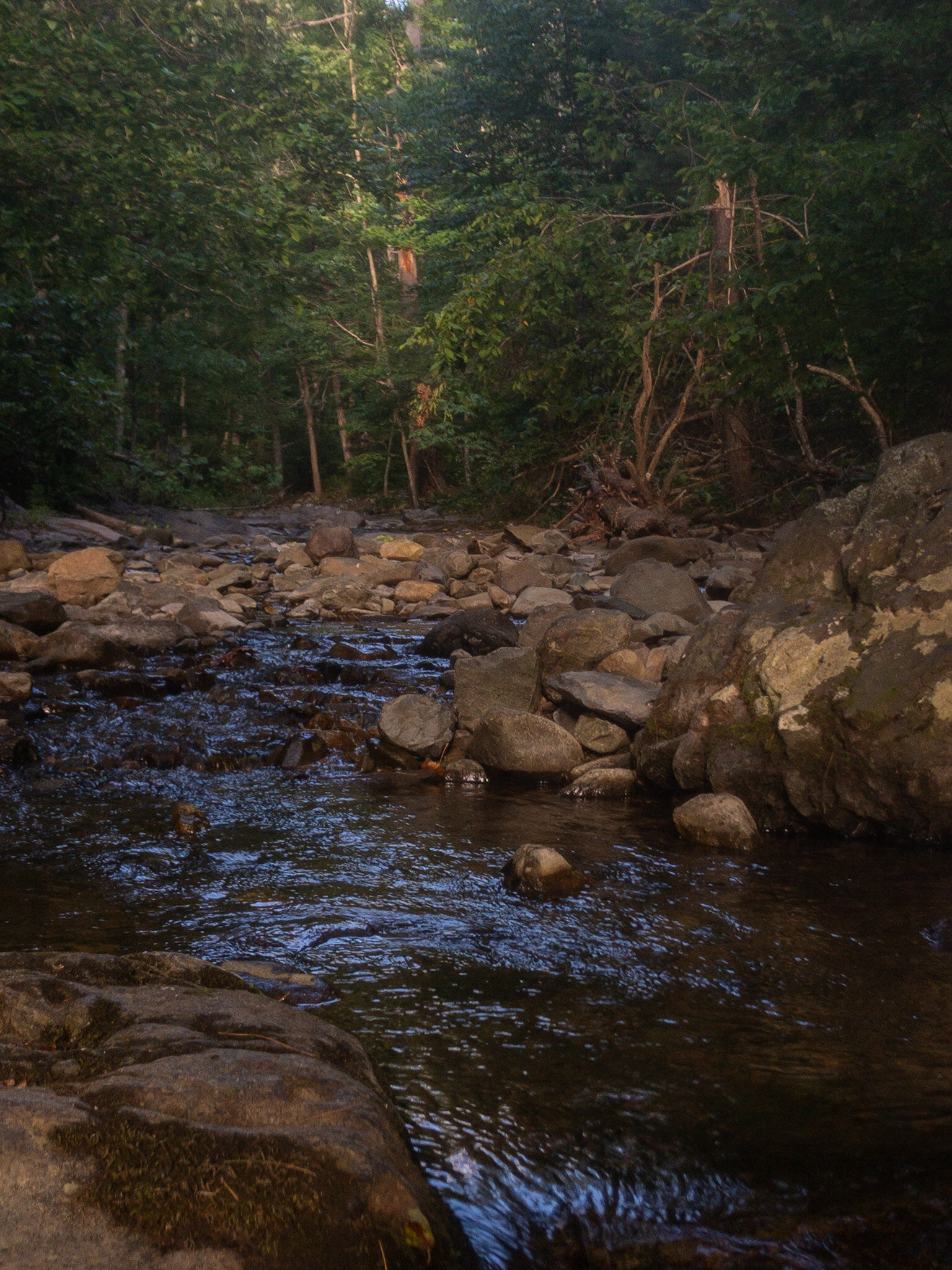 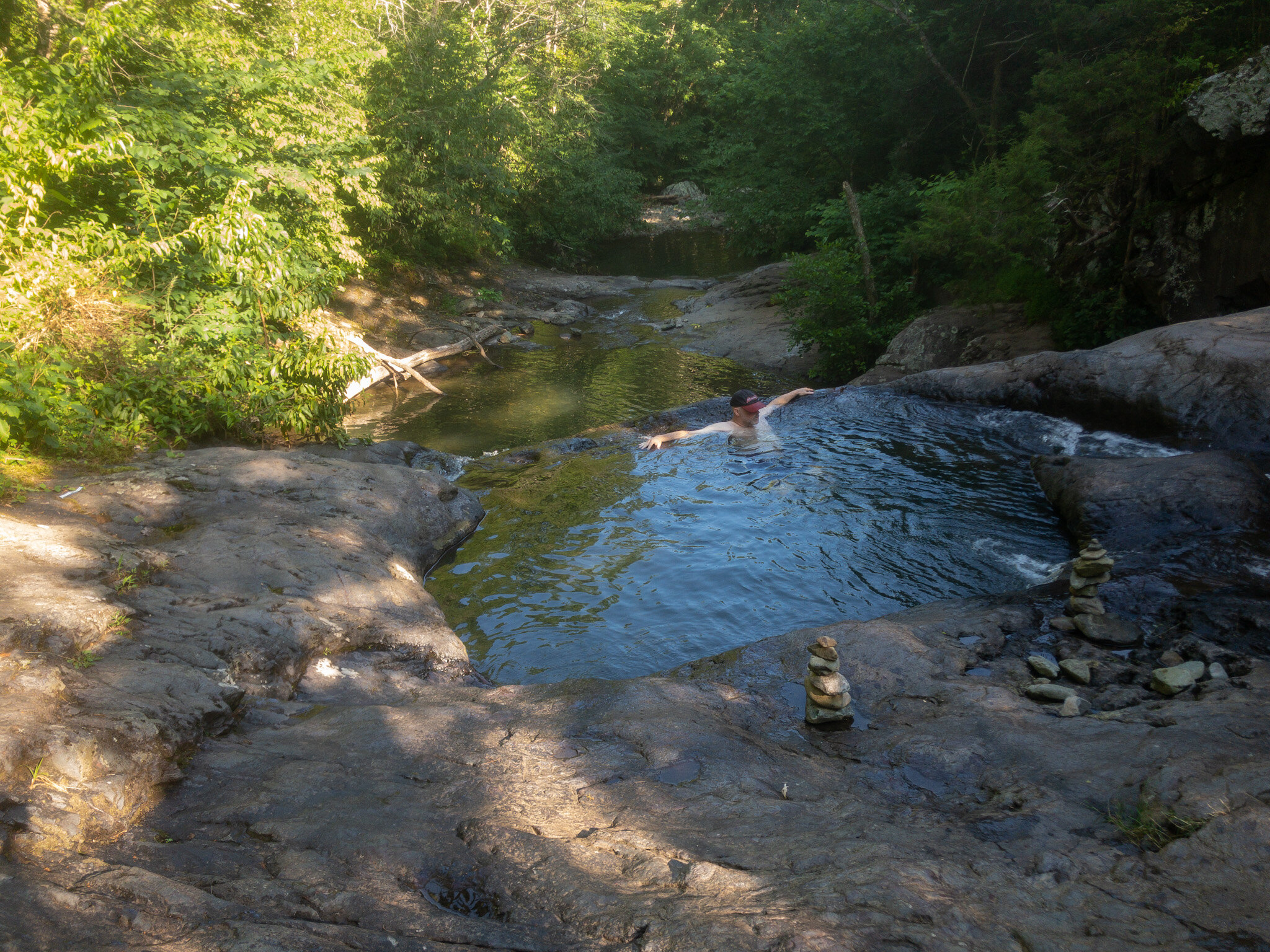 Hard to see, but the water from my hot tub cascades down 20-30 feet into the next pool. 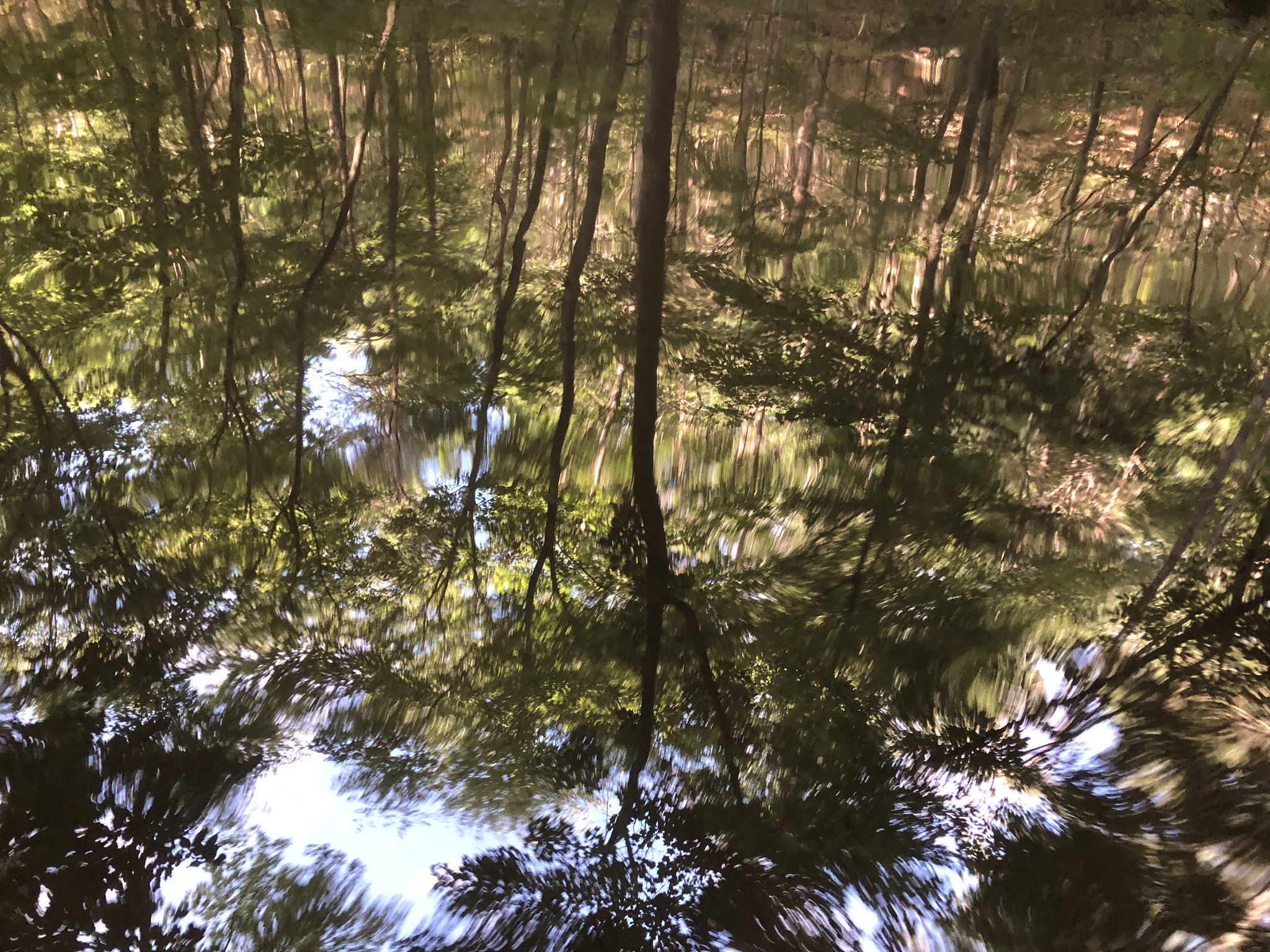 I took lots of reflection pictures while soaking. 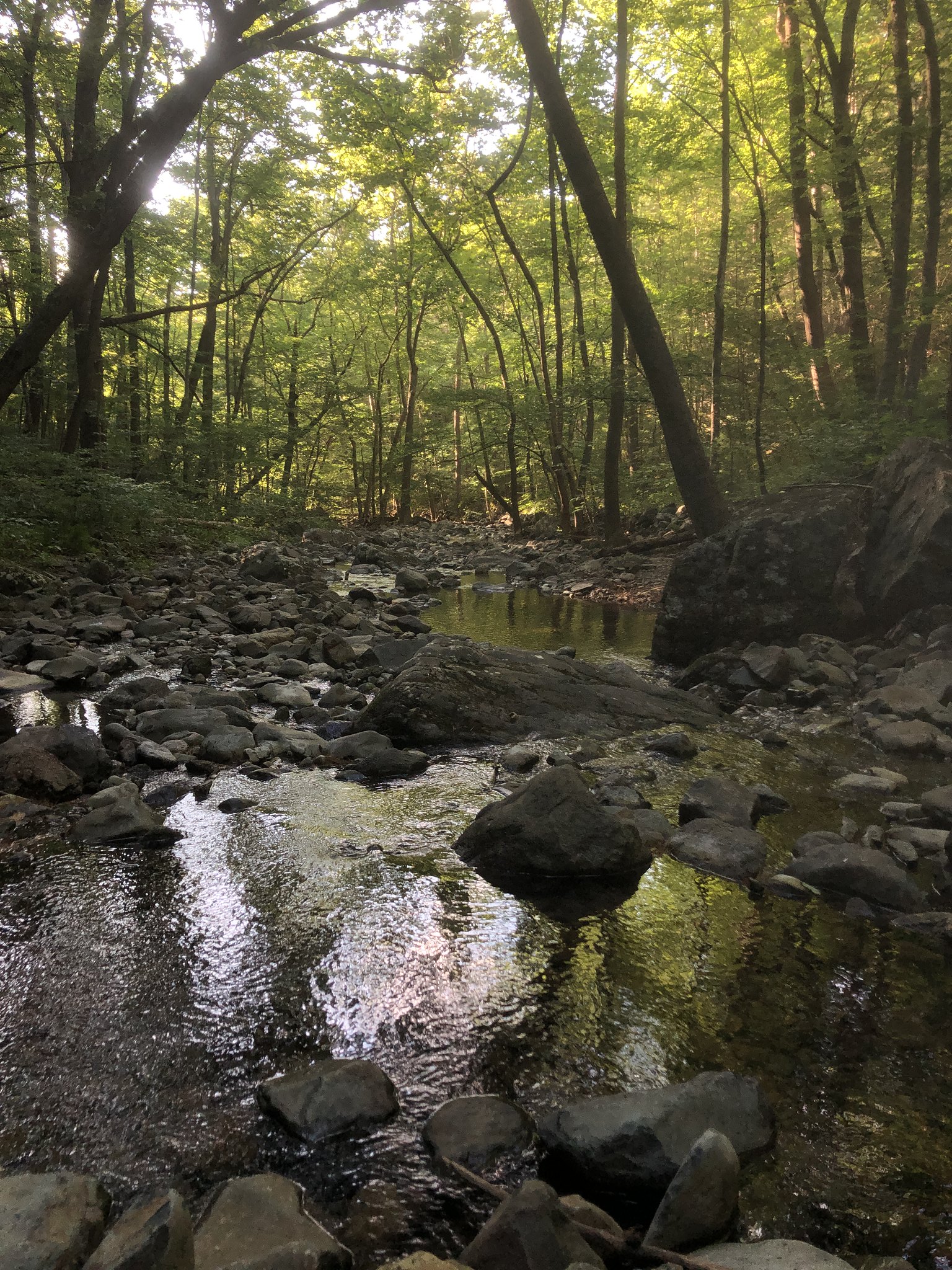 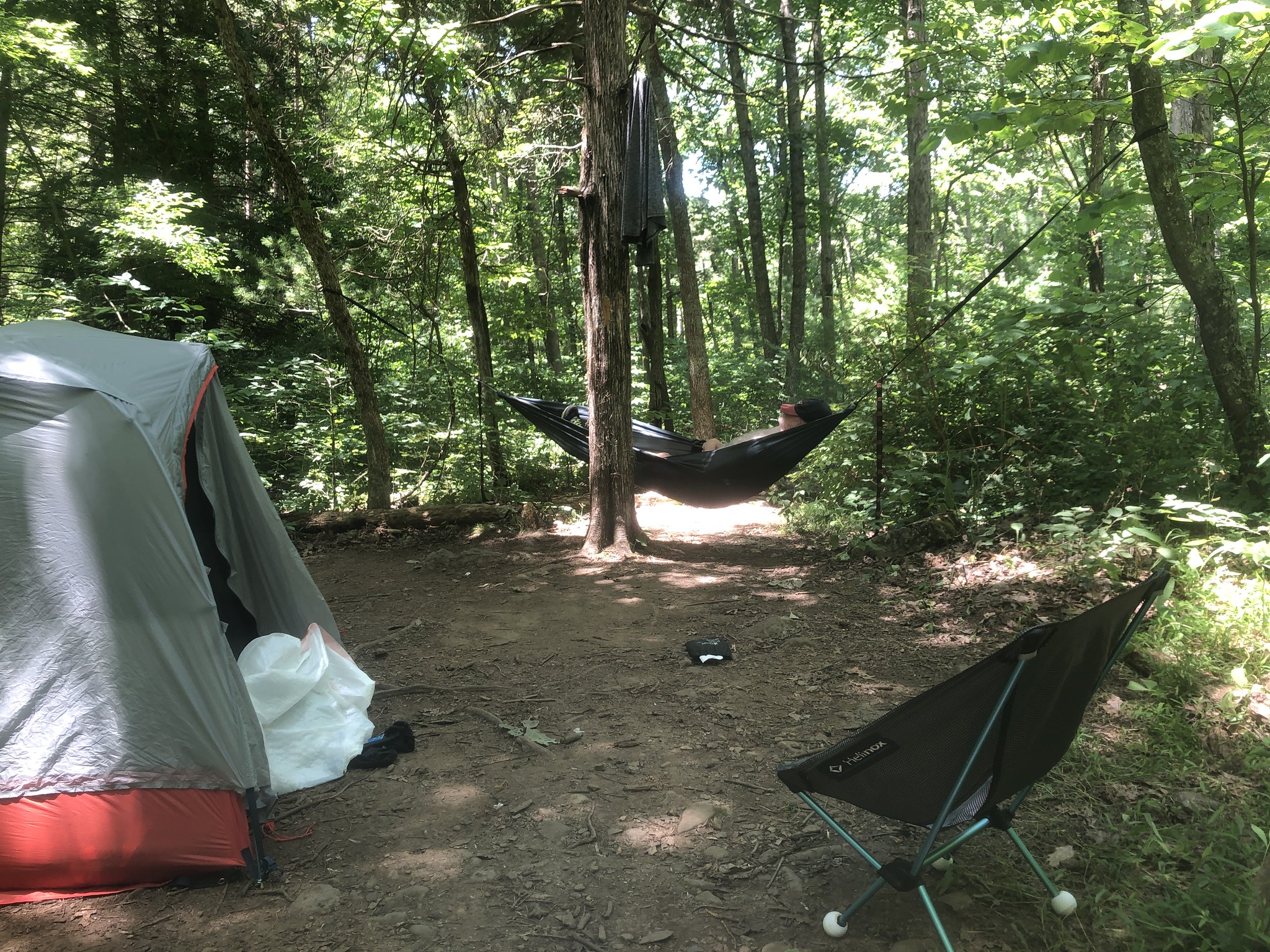 "Action" photo of me taking a nap. Unfortunately didn't get one of me eating a sandwich. 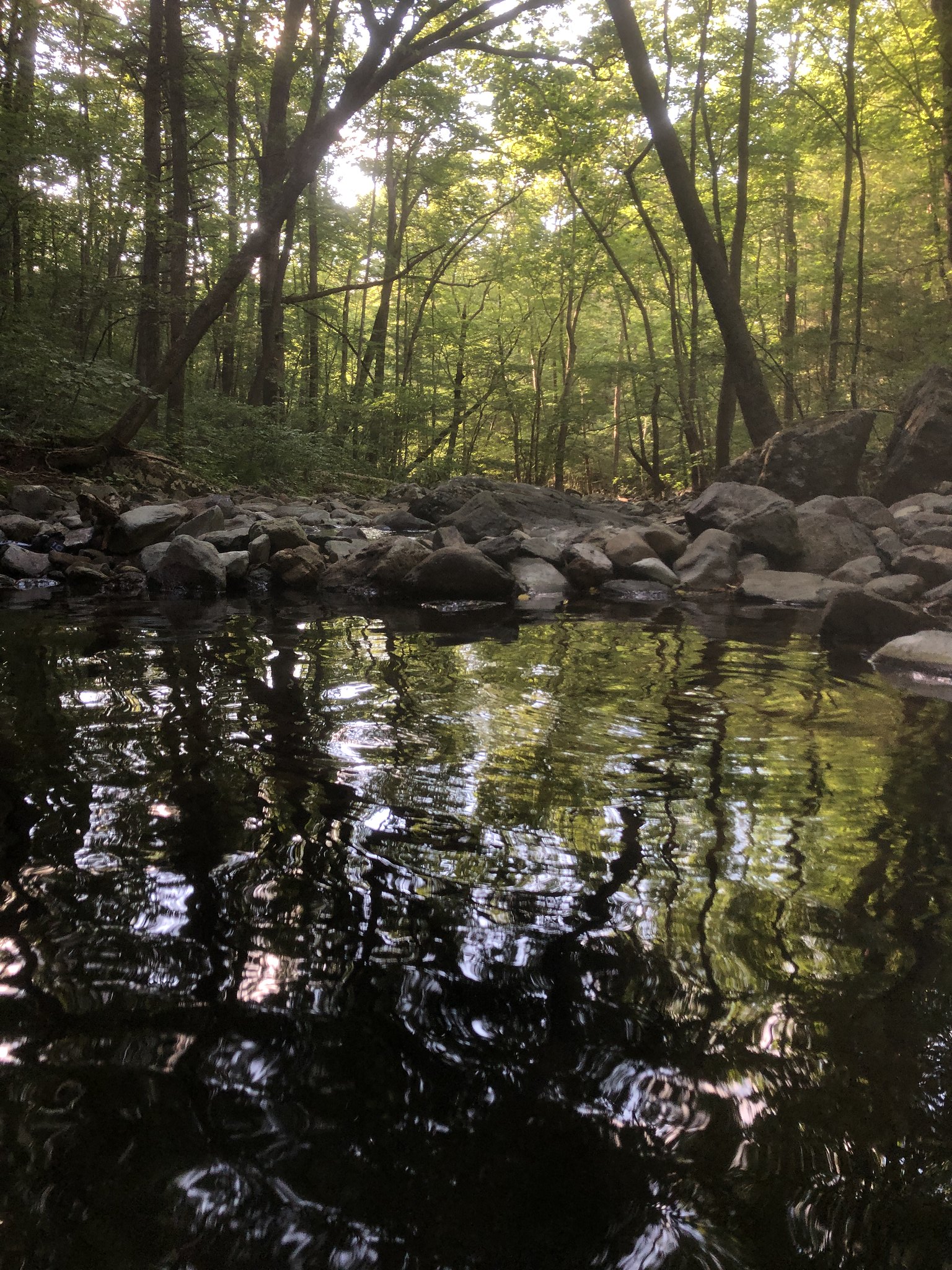 I wasn't really sure where to put this, if anywhere, but I guess technically it was backpacking. I was dying to get out of the house and it was super hot. And I wanted to try out my inReach mini (my last inReach tumbled down the outlet of Shadow Lake on the first day of my first long solo trip). I had an unexpected window open up with work/home/hockey tryouts/etc. So, I headed down to Shenandoah for two nights. My plan was to roll in Wednesday evening and set up camp 1.5 miles in. Next day, I had a day hike loop I was going to do, then return to basecamp. In between, I was going to spend some time in swimming holes (which was the main reason I chose this place).

I got to the Front Royal entrance station around 7:00. It is self registration, they were out of forms. I went back to the station and they didn't have any there either. The ranger recommended I drive an hour and a half round trip to the next campground. I recommended that I take some scrap paper from my car, describe my trip, and drop it in the box. He smiled and told me that he couldn't say the words "its ok if you do that". So, that's what I did.

I took the Thompson Hollow trail down to Overall Run and found an existing campsite along the creek. Got set up as it was getting dark and also realized I didn't have any food. Not like I left it in the car, like I actually neglected to bring any (I really did motor out there on short notice).

Next morning, I hiked back to the car and hit a gas station a couple miles away. Grabbed a couple sandwiches, and was heading towards the counter when something caught my eye. A beer display. And I started imagining a different plan for the day. I grabbed a six pack and hiked it and my sandwiches back to camp. My new plan was to spend the day in a swimming hole and have some refreshing beverages. OK. Then I realized I didn't have my charger and my phone was low. I had brought my big camera, but my son jacked it up when he borrowed it for a school project and I didn't have my brush or wipes. So, I went back to the car to trade the big camera for a charging cable. I already had my bathing suit on, so I could jump in the water on the way back.

Got to the car, made the swap, passed the swimming hole and decided to jump in (at this point, I should say I have been obsessed with jumping off a rock into the water in the backcountry and had, for various reasons, not done it yet). Emptied my pockets, jumped off the rocks, grabbed my stuff. I realized I didn't have my inReach. I figured it fell out of my pocket between there and the car. I retraced my steps to the car, no sign of it. Drove 10 miles to get reception to tell my wife not to expect messages, came back and looked all the way to my campsite. It was gone. I was annoyed, but didn't let it ruin my day.

The main swimming hole had some people there, but I found one a little downstream that was perfect. Spent the day watching the water flow. Took a nap in the hammock, had a sandwich. It was a very good day.

I guess there is a reason I make spreadsheets and pack a certain way. Apparently, that is necessary for me. Oh, and I tracked my inReach once I got home. It looks like it was still in my pocket when I jumped in the water. It made it to the next pool down where someone picked it up and drove it to Fairfax, VA. I messaged it a couple times, offering a "reward" to send it back, but it never pinged after that day.

So, all in all, a pretty enjoyable dumpster fire of a "backpacking trip".

Like my father-in-law told me after a few mishaps on a raft trip. "Not all stories are happy stories, at least you have a story."

You seem to have the same luck with In-Reach that I have with cameras.

My kind of report @McKee80! You know, I have a reoccurring dream where I forget to pack my food for a long backpacking trip. In my dream, it never dawns on me until I am a good ways along the trail heading towards that first campsite.

This is EPIC. Although I do feel bad for you losing your In-Reach.
A few years ago my dad and I packed up the Subaru I owned at that time and drove to Utah to go hiking (we live in eastern Washington). At the Idaho rest stop just before you cross into Utah we realized I had left the tent poles at home. Being of Scottish heritage, purchasing a new tent was out of the question so we found some PVC pipe at the Tropic Ace Hardware that sorta worked for the two weeks we were gone. Some of that PVC pipe is still in my garage ready for whatever other use I will find for it.

Captivating story! You actually look very relaxed in the photos. Sorry about the InReach Mini.

This report made my day.
Thank you.
Instagram
@gregwattsphotography

Awwww haha I feel bad that I find it all so humorous. Seems like you are taking it in good spirits though. Sometimes the backcountry is nothing but frustrating comic relief!!
Thank you for sharing!
You must log in or register to reply here.
Similar threads