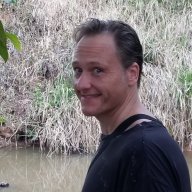 Hello BCP,
I thought my first post would be a trip report from my very first backpacking trip, which took place in August 2019. I am 47 years old, and my wife and I decided to try backpacking for the first time this summer. We've done some car camping in the past, but the thought of venturing further into the woods than my cooler of beer could follow seemed too frightening. After my wife and I day hiked several parks in Utah, we had a great time and wanted to build on our outdoorsiness.

After spending far more than we expected for gear, we thought we had what we needed. We decided to do a two night trip to South Cumberland State Park in Tennessee, in the Savage Gulf section. We thought this was a good option because it was in driving distance from our home in Atlanta, and could give us a 21 mile loop. We hiked the eastern part of this area, but there is quite a bit more to it, just off the screen to your left. 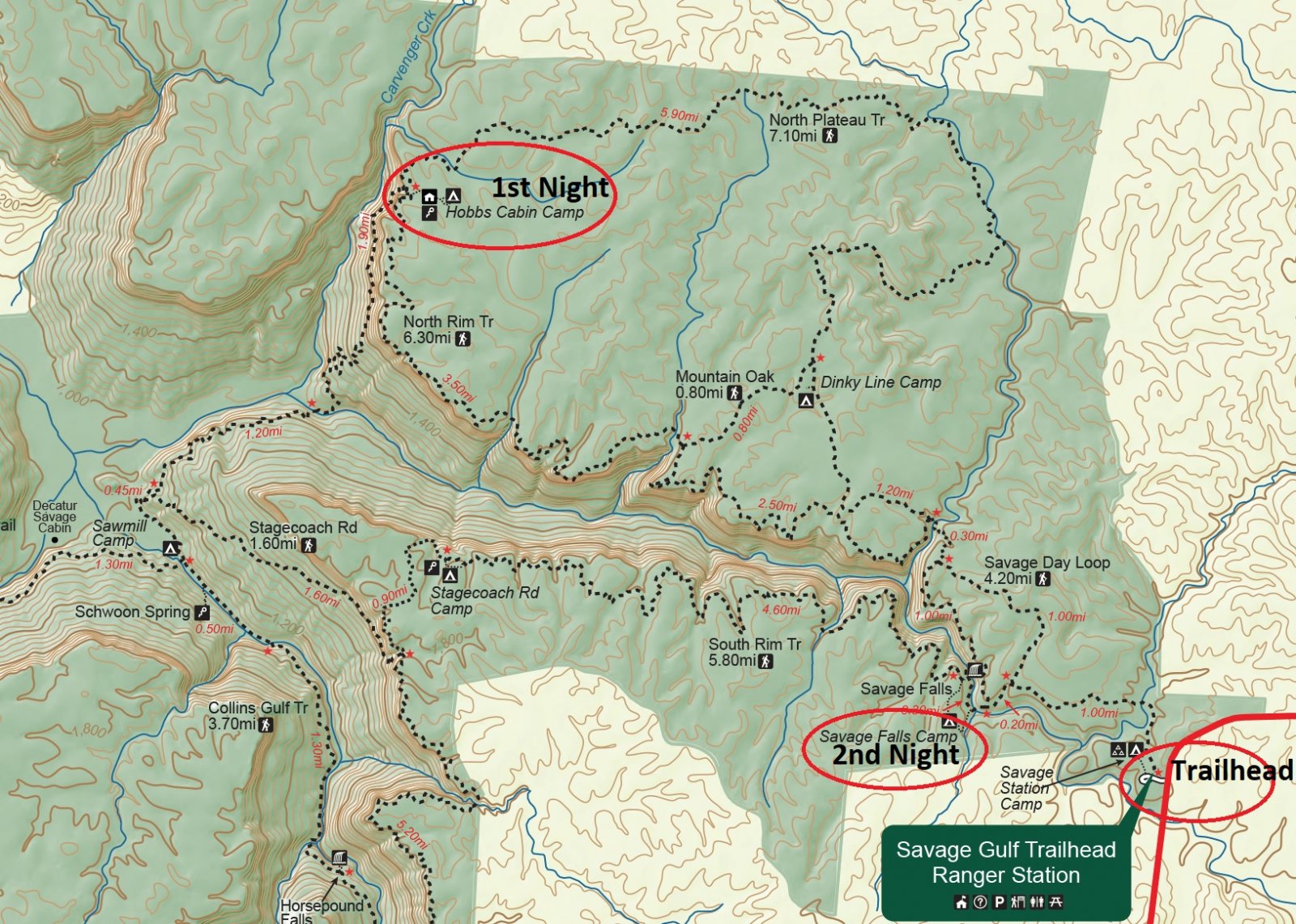 This picture makes it easier to see the route we took.

The first leg of the journey was roughly 8 miles to the Hobbs Cabin Camp. For the most part, we travelled along the north rim of the gorge. It was heavily wooded, but there were several places to look over the gorge, such as this. 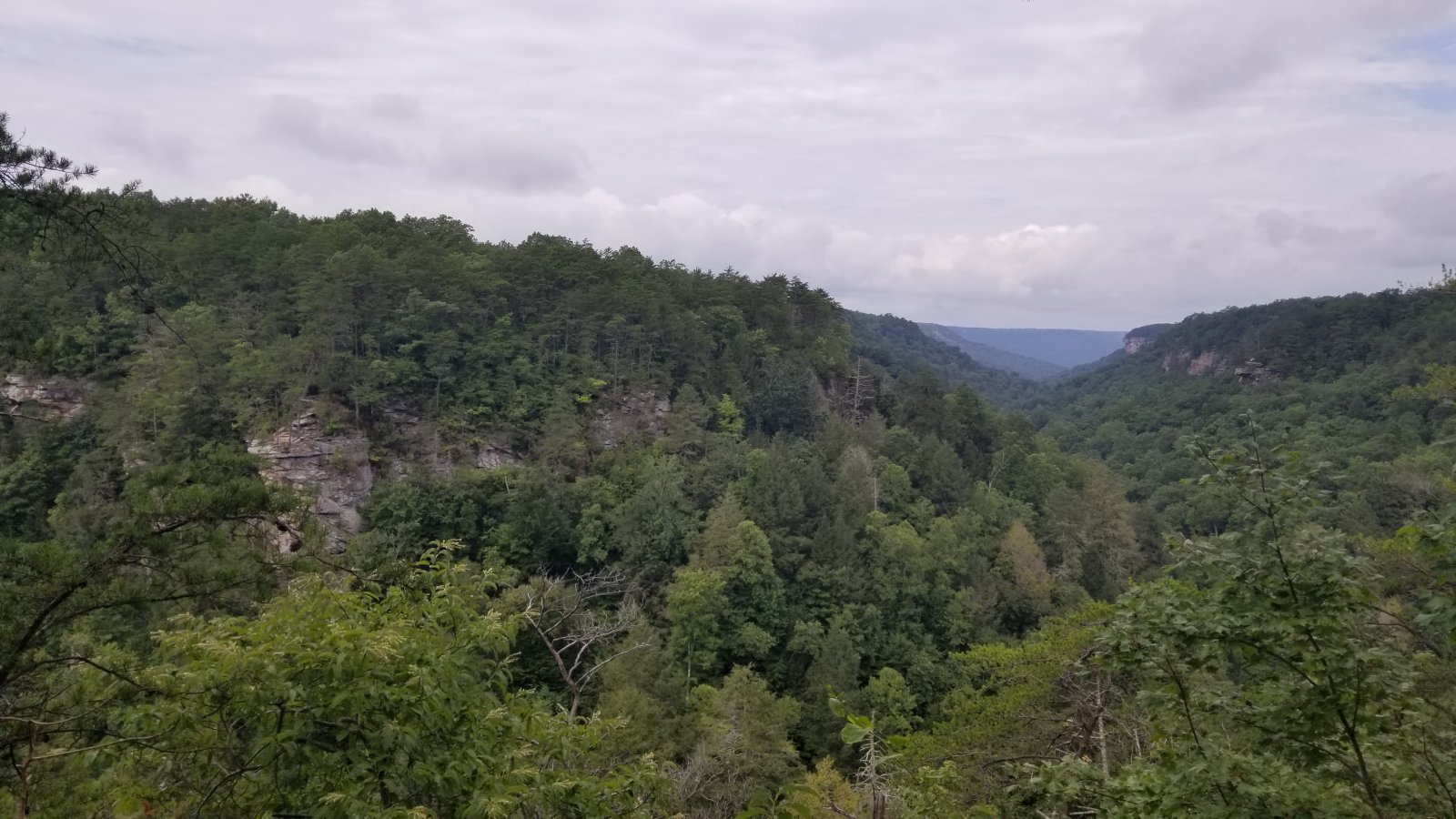 I heard a strange noise that took me a moment to figure out. Then I saw it - Holy smokes, it was a rattlesnake! I had never heard one before. I always expected them to sound like a baby rattle, like in the cartoons. The frequency of the rattle was much faster, more like an angry cicada. Luckily it was far enough off the trail where it wasn't coming at us. We gave it a wide berth, looked down, and saw another rattlesnake inside a rotten log right next to the trail. I kept moving, and a couple minutes later saw this guy. 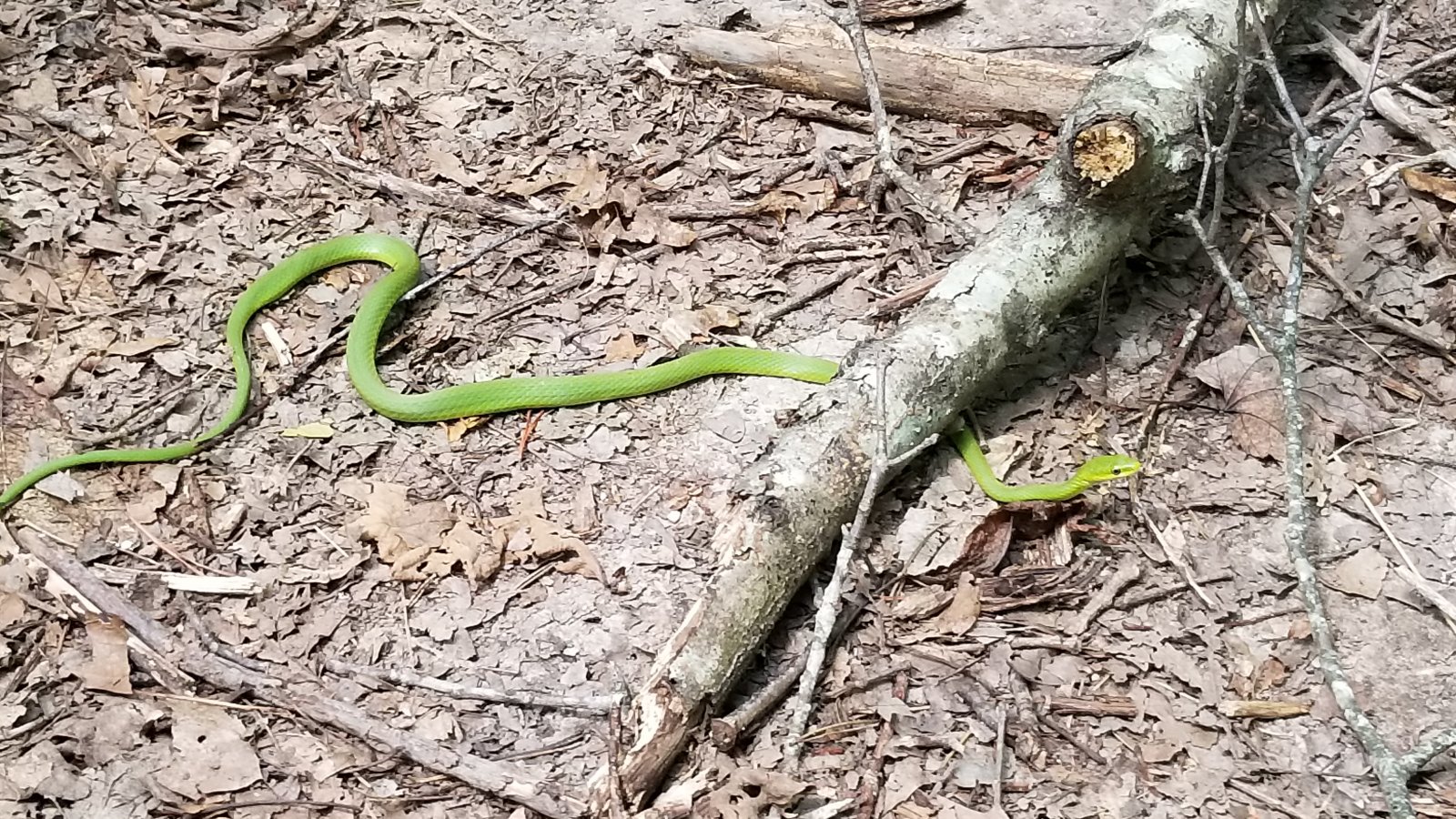 He was a lot more agreeable than the rattlesnakes, and really loved posing for us. After this snake-a-rama, we didn't see any more for the rest of the trip.

The Hobbs Cabin Camp had 8 private campsites available, and one rustic cabin. Being a backcountry camp with no running water, the area used a spring behind the cabin as a water source. It was pretty low and full of sediment, but we were able to filter enough for our needs. There were two pit toilets.
Here is our spot, site # 5. 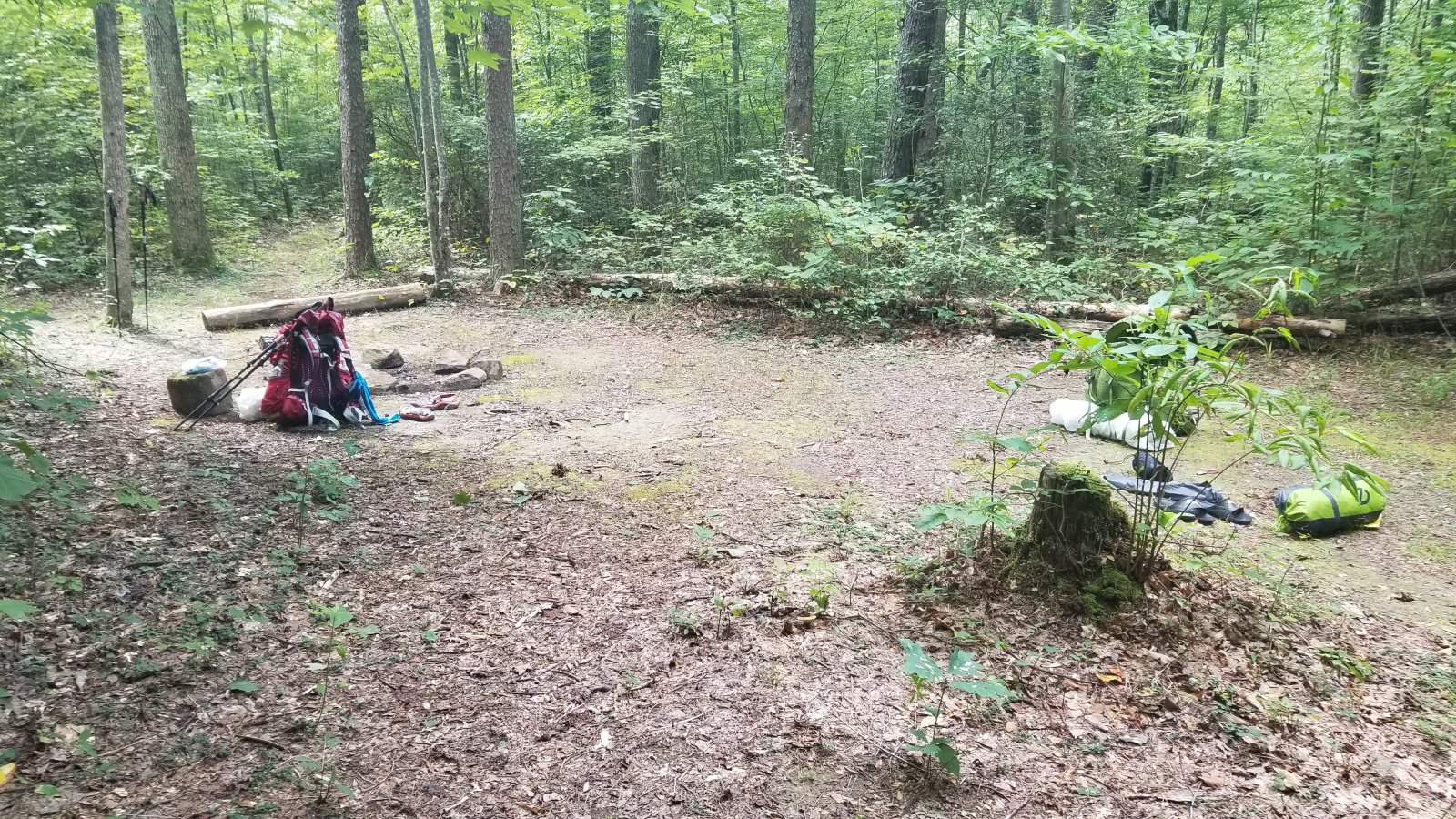 It rained that night and in the morning. It took us a long time to get packed up and moving, and the rain stopped by the time we were on the trail. The first part of day 2 went by the unassuming map name of "Connector Trail". It should have been called "Rocky Slope Funland for Breaking Ankles". 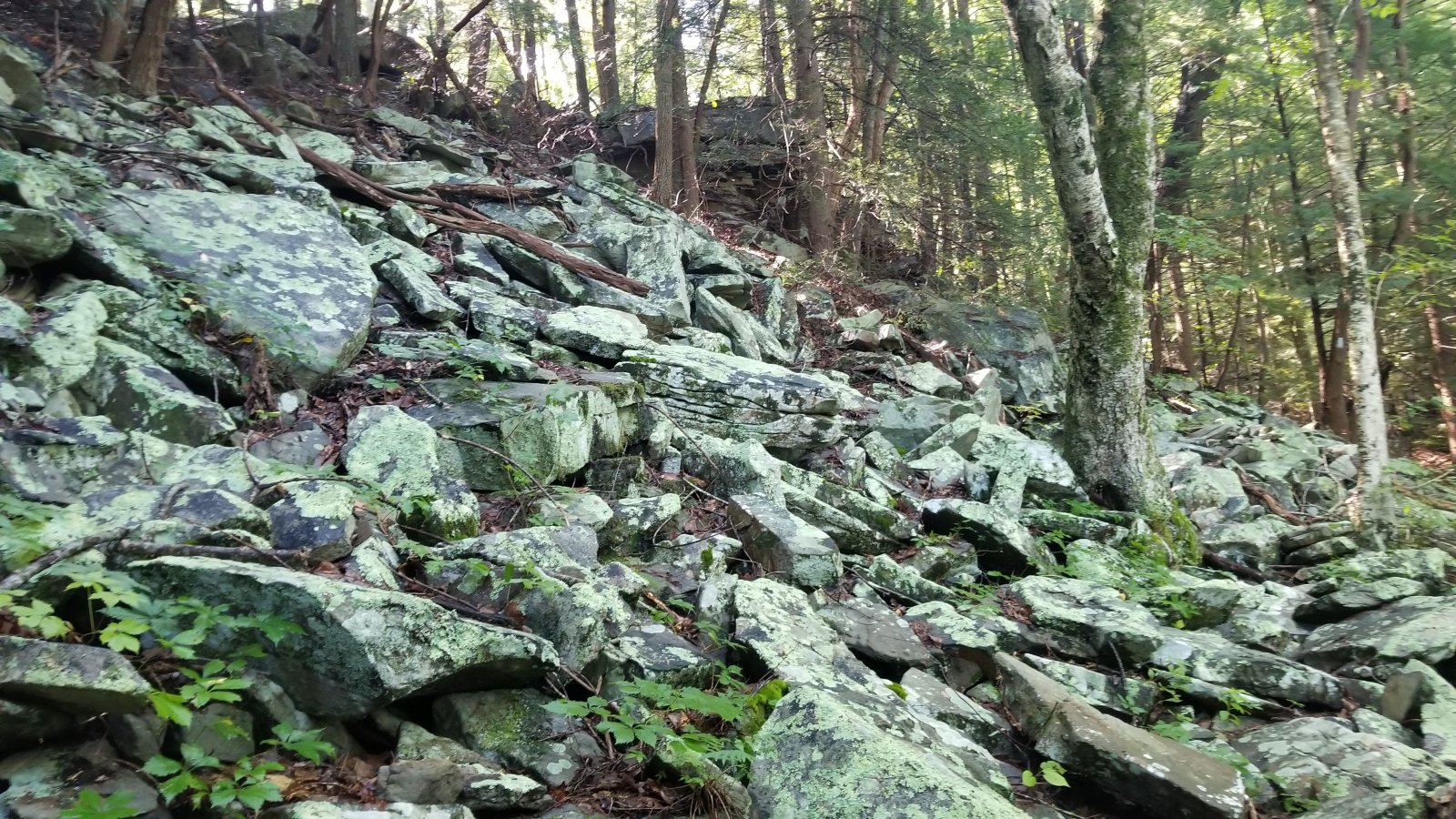 Here is the beginning of the 6.7 mile Connector Trail. I came down this thing, and I can't find the trail in this picture. The goal was to hike 11 miles today to the next camp site, and this section slowed us down pretty good. Luckily there were plenty of blazes to follow. Many of these slabs were slick, and would wobble. Good thing we each had a full set of trekking poles... 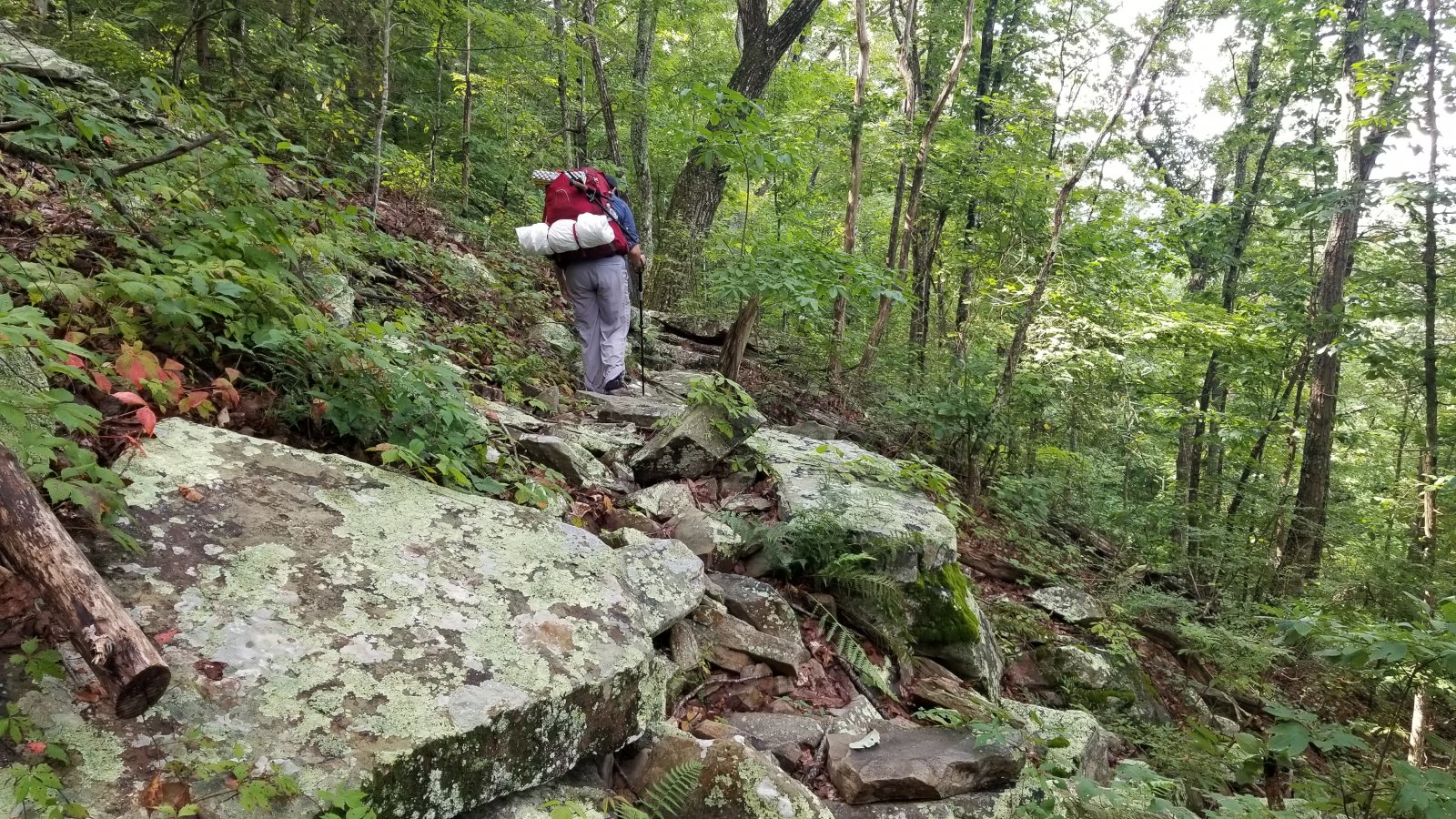 ...until 2 minutes after this photo when one pole broke in a scary spill. No injuries to worry about, and we kept chugging along.

Leaving the Connector Trail behind, we soon started going up the other side of the gorge, on the Stagecoach Road Trail. This turned out to be a pretty spot to have lunch. 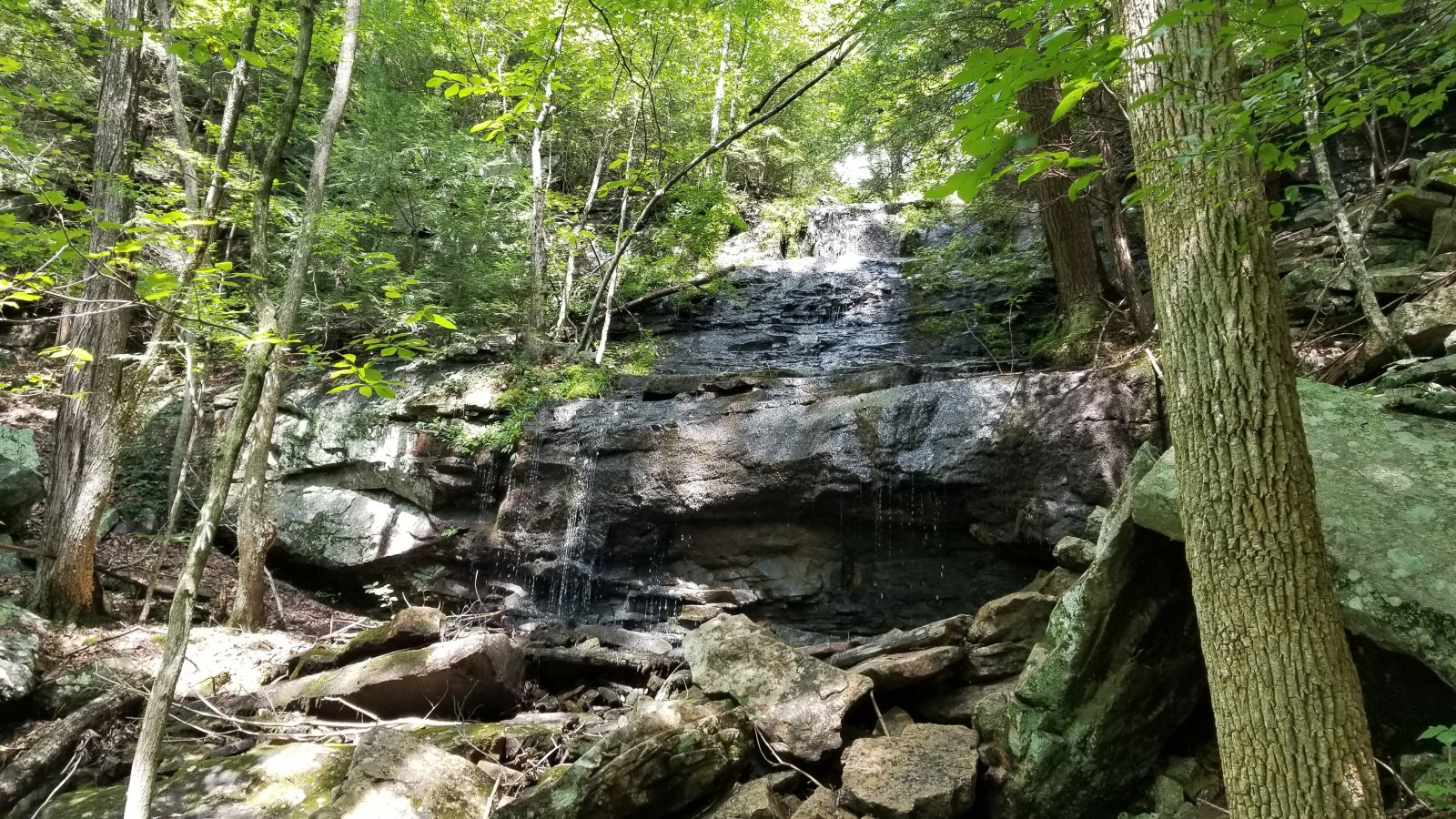 We make it to the Savage Falls Camp about an hour before nightfall. We had enough time to make camp and have a quick dinner. We had to conserve water because we didn't have time to make it to the falls to filter more. This camp had 8 spots as well. However, these were not as private as Hobbs Cabin. Here is our spot, site # 7. 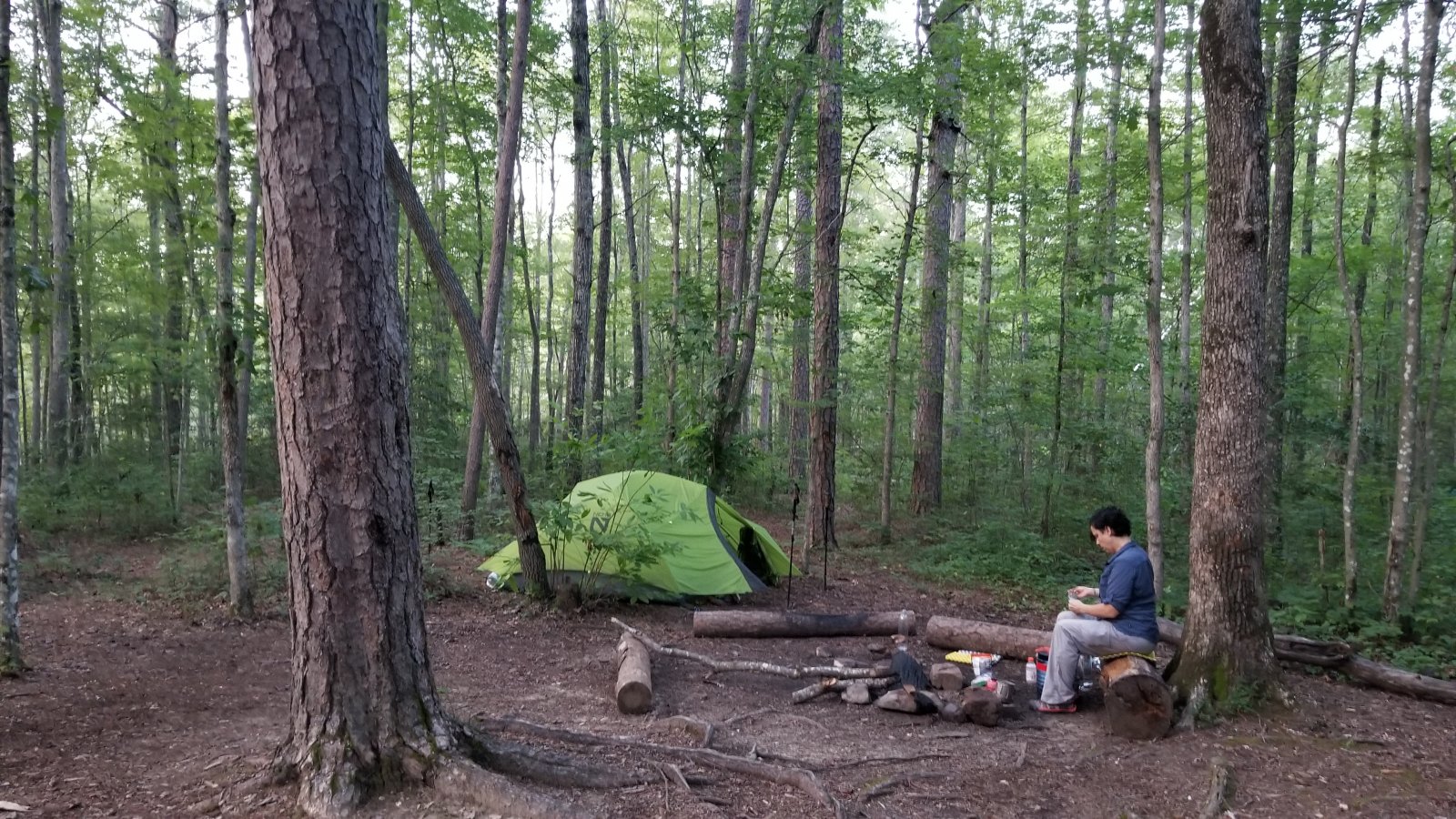 Here is Savage Falls, where we got our water in the morning. 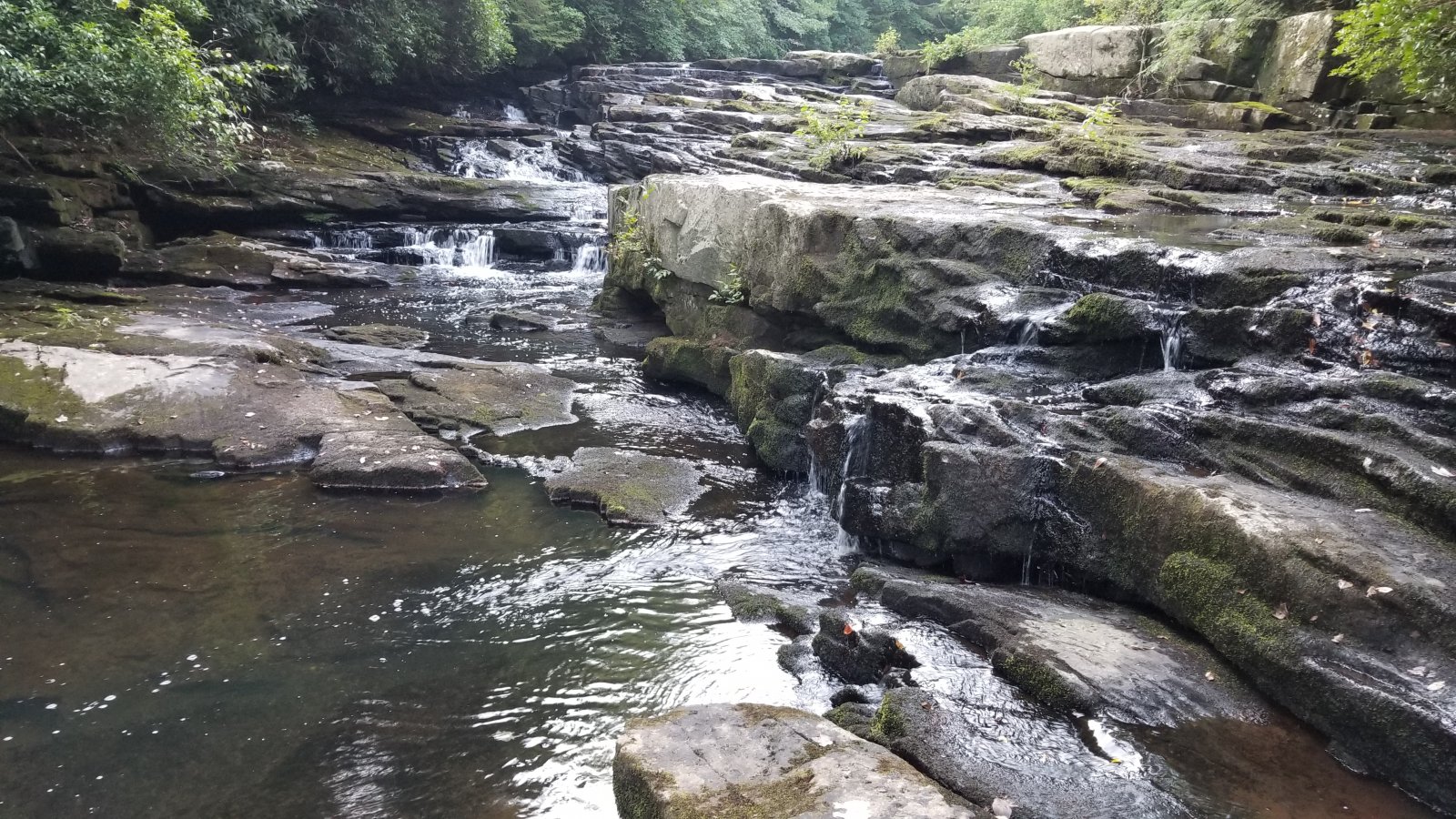 At this point we were only two miles from the trailhead, so we hiked on out and went back to civilization.
As a first backpacking trip, we thought it was a great success, and had a lot of fun. We liked that we could do a multi-day loop, as we did not want to mess with getting a shuttle. Tennessee's State Park Reservation system is pretty nice once you figure it out. We were able to reserve our specific backcountry campsites several weeks in advance, and they even had some preview pics and information, such as whether the site was level.
We also thought of this as a good shakedown trip, in preparation for longer section hike on the AT.

"Here is Savage Falls."
That is not Savage Falls, but above it. It would have just been a dribble, but I hope you went down to the actual falls!

Savage Gulf, along with several other places in the vicinity, is absolutely spectacular. Or can be.
Unfortunately, you picked the worst time of year, and the worst possible route(everywhere that I rarely bother going!), missing everything that makes it so great. Seriously, it's off the chain, so don't write it off based on this one trip.
Definitely go back when the falls are flowing, and do not skip the Greeter Loop on the "short side"-if you don't do a route that includes it, drive over and do it as a quick dayhike.
Feel free to hit me up for routes-I will guarantee you a MUCH more enjoyable experience next time!
P

I love the “Rocky Slope Funland for Breaking Ankles” comment. I think we’ve all been on a trail like that, at least for a little ways. It’s great that you enjoyed your first trip, I hope you have many more. From the pictures, the place is beautiful. Thank you for sharing your first backpack with us.

Great first report! Looks like a beautiful area. And welcome to the wonderful world of backpacking. Got any upcoming trips planned?

Great report and pics! I love Savage Gulf. Next time I highly recommend the Big Creek Gulf/Rim loop. Go after heavy rains and check out Ranger Falls. Greeter too. A couple of really nice campsites near the rim, and the Stone Door overlook is one of the best around.
Fiery Gizzard, Foster Falls and Virgin Falls are a few more spectacular places to check out in the area.
“Something will have gone out of us as a people if we ever let the remaining wilderness be destroyed ... We simply need that wild country available to us, even if we never do more than drive to its edge and look in.”
- Wallace Stegner

That is a beautiful picture of the greensnake. What a handsome critter! Glad you enjoyed your first overnighter on the trail.
Tim V.
W

Welcome to BCP from another southerner

The Connector Trail is definitely rough on the ankles

I've only been to Savage Gulf once (and December so no snakes). Next time make a point to check out Schwoon Spring and I also liked the meadow where the Decatur Cabin sits. 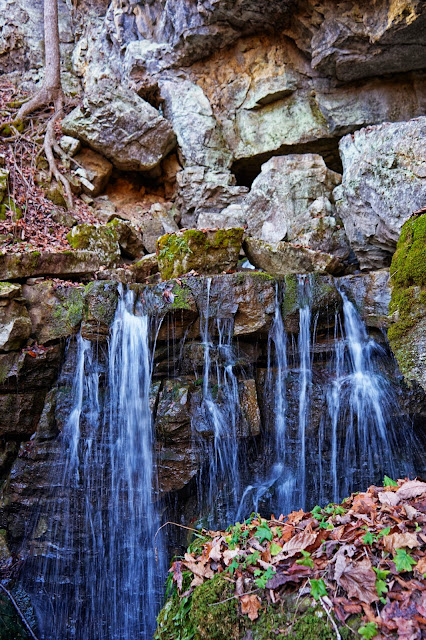 and with a friend for a little perspective 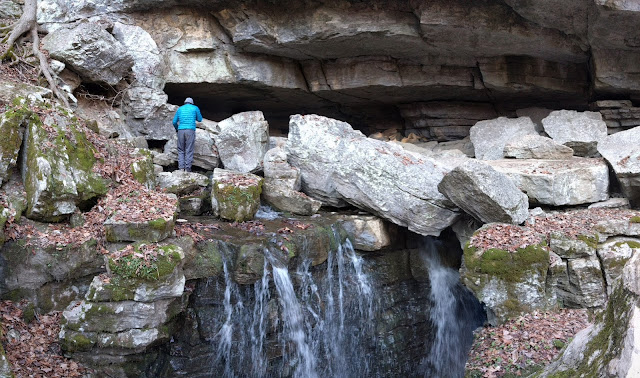 You should also make a point of checking out the Smokies, it is an excellent park to figure out backpacking since the trails are well marked and the campsites are reservable (and all have nearby water sources). I've spent quite a bit of time in the park and would be happy to help you figure out a route.
My trip reports: backpackandbeer.blogspot.com

Thanks everybody for your support and suggestions. Looking forward to another backpacking trip next spring, but not sure where yet. I'll be spending a couple days in Chattanooga in a few weeks to do some day hiking at Lookout Mountain and Chickamauga Battlefield National Military Park.

Sweeg said:
Thanks everybody for your support and suggestions. Looking forward to another backpacking trip next spring, but not sure where yet. I'll be spending a couple days in Chattanooga in a few weeks to do some day hiking at Lookout Mountain and Chickamauga Battlefield National Military Park.
Click to expand...

A few more recommendations near Chattanooga, especially with all this rain on the way...

Laurel Snow State Natural Area to the north. Waterfalls and overlooks!
North Chickamauga Creek Gorge
Fiery Gizzard is 45 minutes west. More waterfalls and overlooks.
“Something will have gone out of us as a people if we ever let the remaining wilderness be destroyed ... We simply need that wild country available to us, even if we never do more than drive to its edge and look in.”
- Wallace Stegner

Some great suggestions here. Fiery Gizzard is amazing, especially since the re-route. Laurel-Snow is another really fun overnighter with a couple of excellent waterfalls, and a gorgeous creek along the main trail.
Virgin Falls Trail is a personal favorite-not just the 3 main falls, but the whole trail. Now it's connected to Lost Creek Falls and Cave, which I may check out next week.

I'm just glad you discovered Savage Gulf, and actually went there.
Much as I'm ok with having the whole place to myself(particularly weekdays in winter, most especially during those polar vortexes), I can't get anybody local(edit: to me; I'm just north of B'ham) to go there, or anywhere else on the Cumberland Plateau! It's bizarre. They'll ooh and ahh over my pics, but would apparently rather go hike on the Georgia AT or some crap like that over and over again, where they take pictures of trail signs, or a turd on the ground, because that's the most inspiring thing they saw. Kills me. I went up to Savage Gulf yesterday morning, and took this today before the rain hit(other side of the Connector):

The Gulf was Savagely humid today! 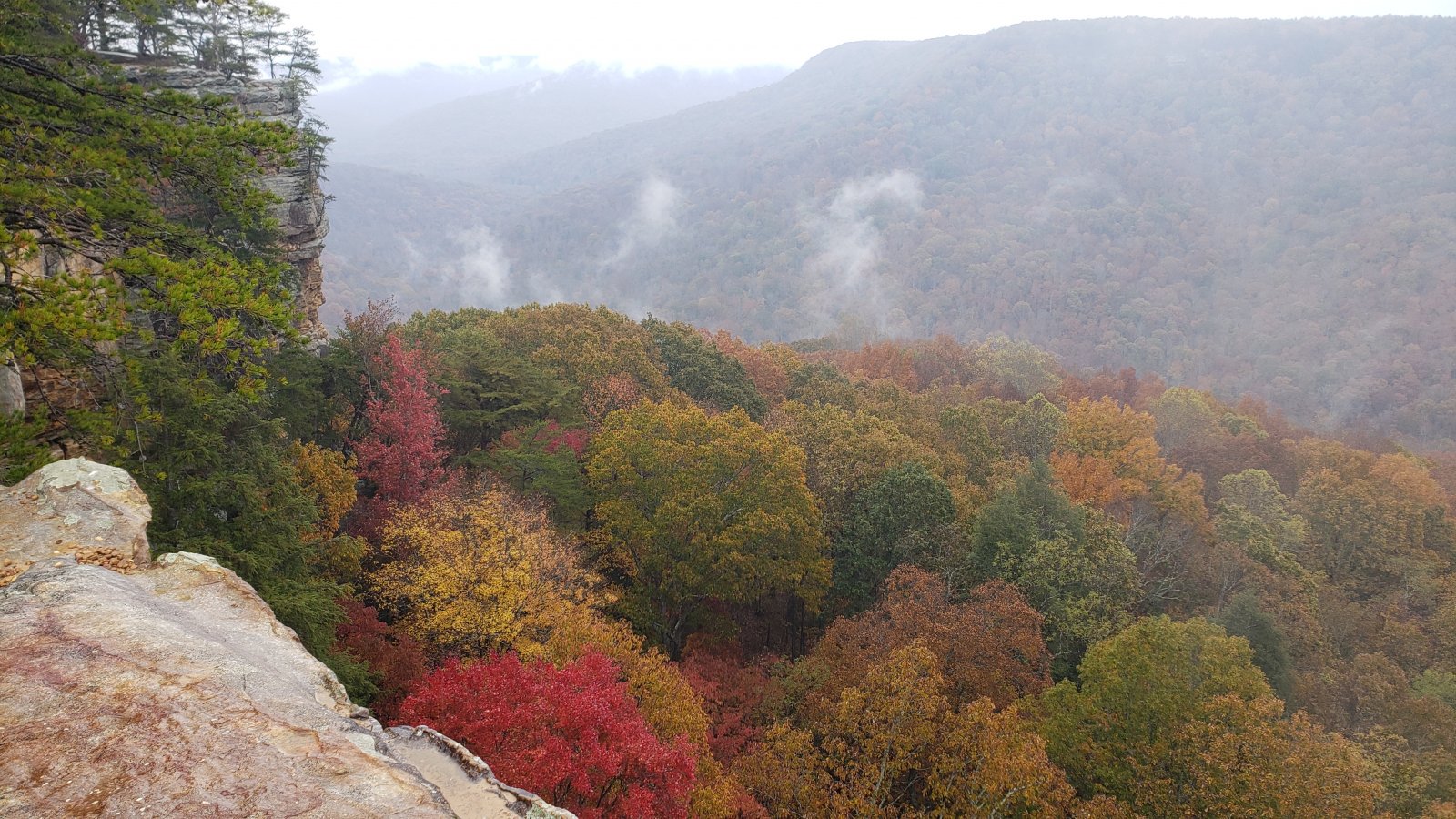 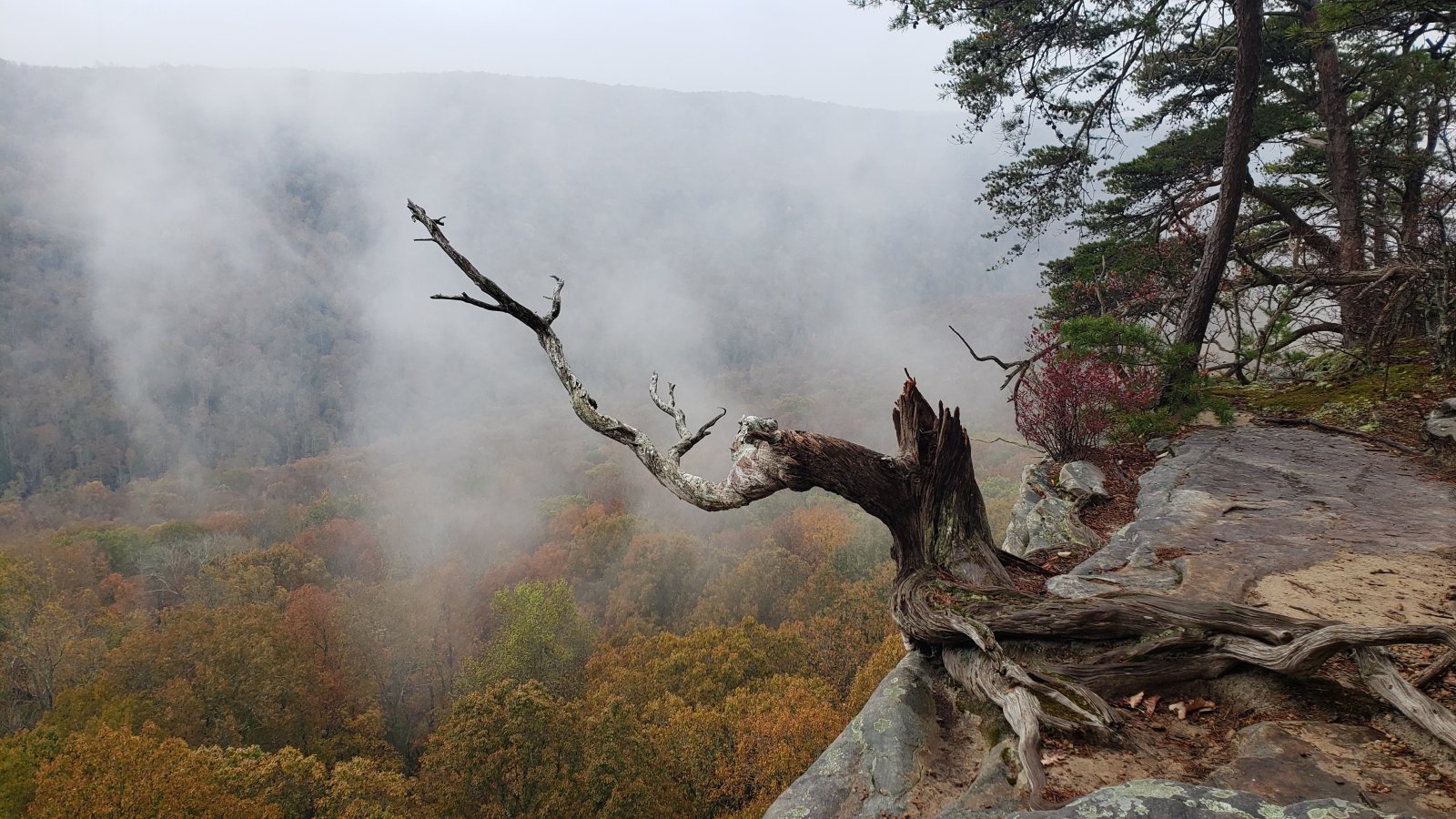 Thanks for the share! The green snake is such a cutie!
Great job on your first backpacking trip! Hope you two enjoyed yourself enough to keep at it.
Any gear you beought that you wished you hadn't? Or gear you were wishing you had?

I didn't feel like I was missing anything. I really had too much stuff. Things like camp shoes and liquid concentrated soap can be left behind next time. Probably don't need a full pound of first aid supplies either.

We all start out with too much stuff! But you said it was a shakedown hike, and that's what they're for. Starting the process, anyway...
Takes a while to figure out your likes/dislikes, and what works for you(and where).
We've got something in common. Live in the SE, but it was dayhiking in SW Utah that fired me up to get into backpacking again. Went with a photographer about a decade ago-guess that was an expensive trip in the whole scheme of things, because it's taken over all my free time since! One of the best things that ever happened to me.

Should have said this before, but especially for your first time out, that was a great trip report

Great report, and thanks for sharing. That rocky trail looks like a really unpleasant mess; you're not kidding about that!
You must log in or register to reply here.