This is a short story of an interesting detour. Maybe not for the beginner from Europe who might be interested in the big picture only. But if one has roamed the country for more than 30 years details are becoming more and more fascinating.

Driving on Buckhorn Draw Road from the San Rafael River Bridge to I 70 is easy but not that sensational. Except for the first miles gently rolling hills dominate the landscape. After crossing the river bridge you find Assembly Hall Peak, Bottleneck Peak and Window Blind Peak. How about a little exploration adjacent to the road? 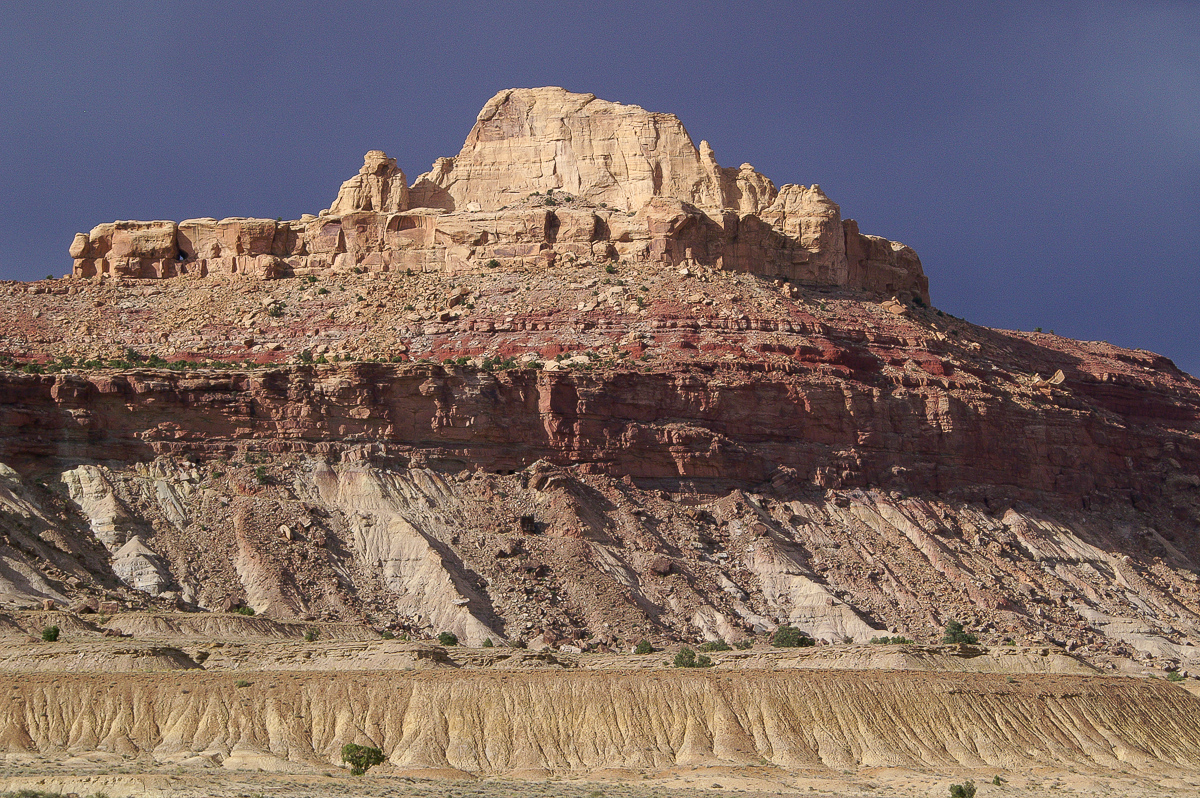 Calf Mesa. Do you see the old mining road up the talus slope? Thunderstorm in the background.

On the right side - to the west - the cliffs of No Mans Mountain raise. This is an old mining area too. Sharp eyed people may find remnants of an old aerial tramway. Old car wreckages mark the place of one of these mines or better said the place below the adits. 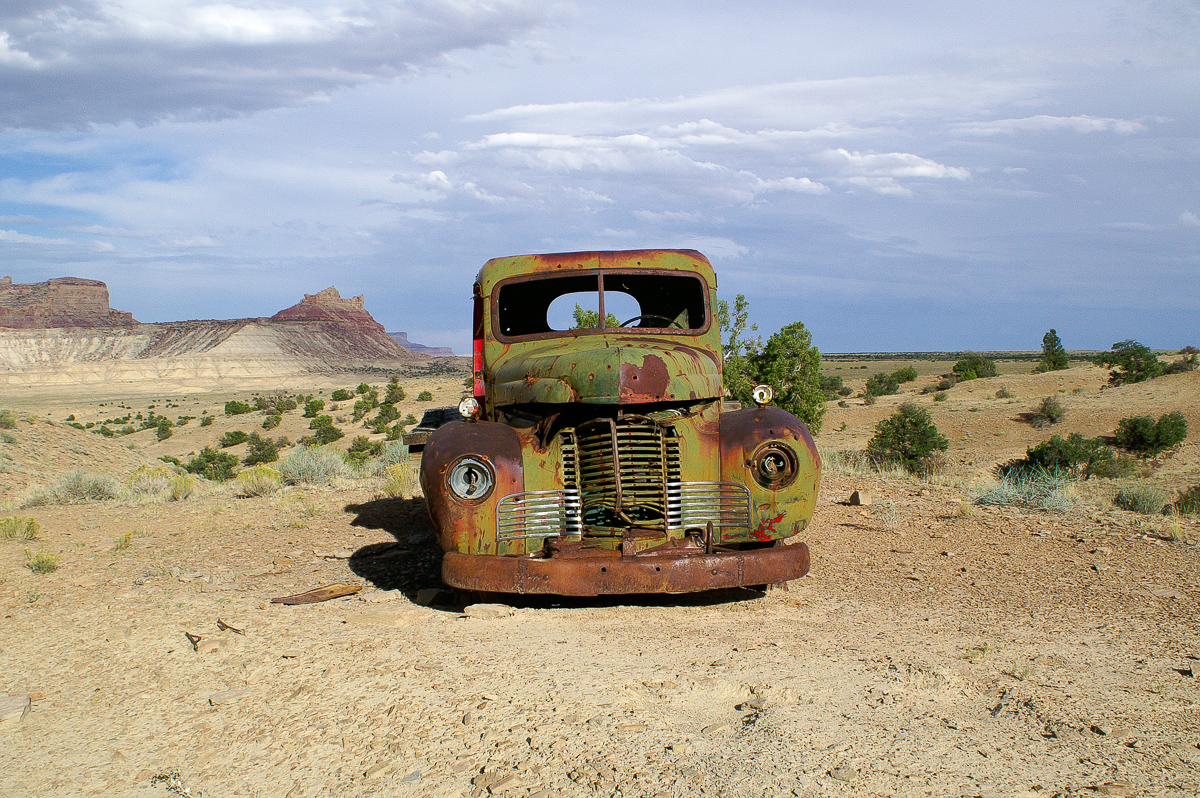 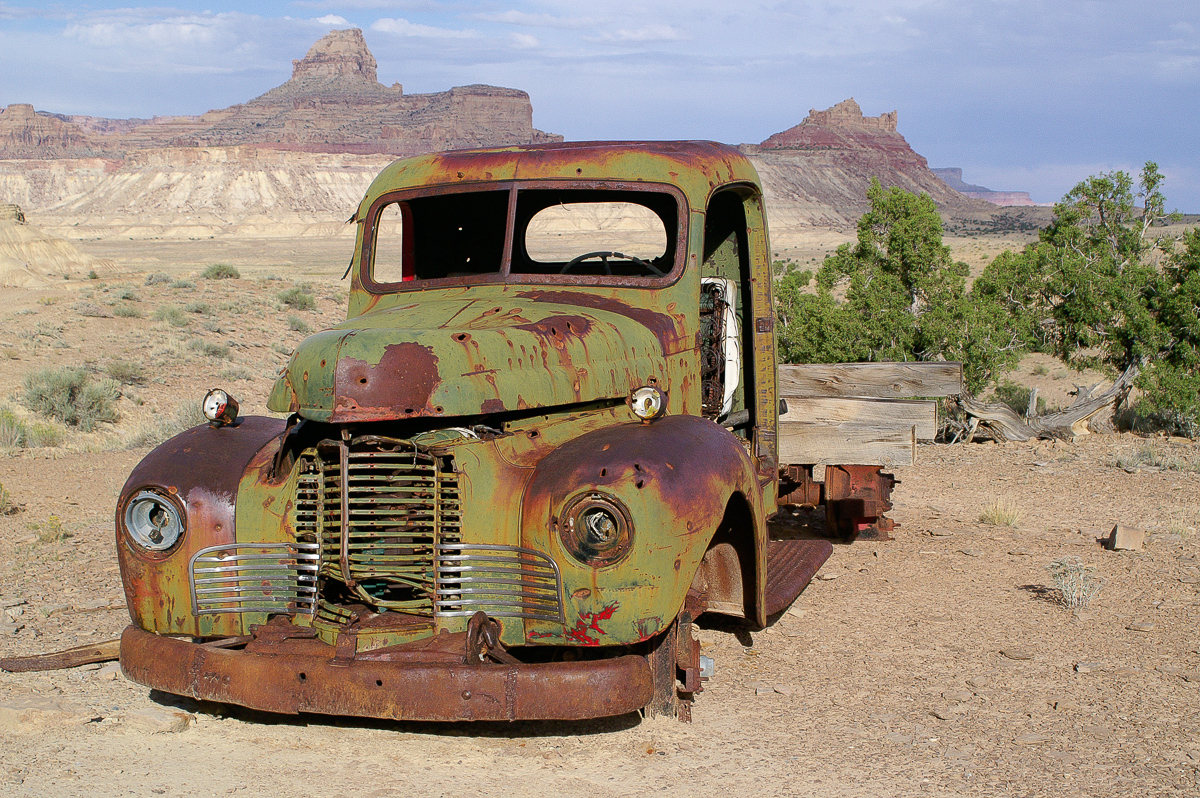 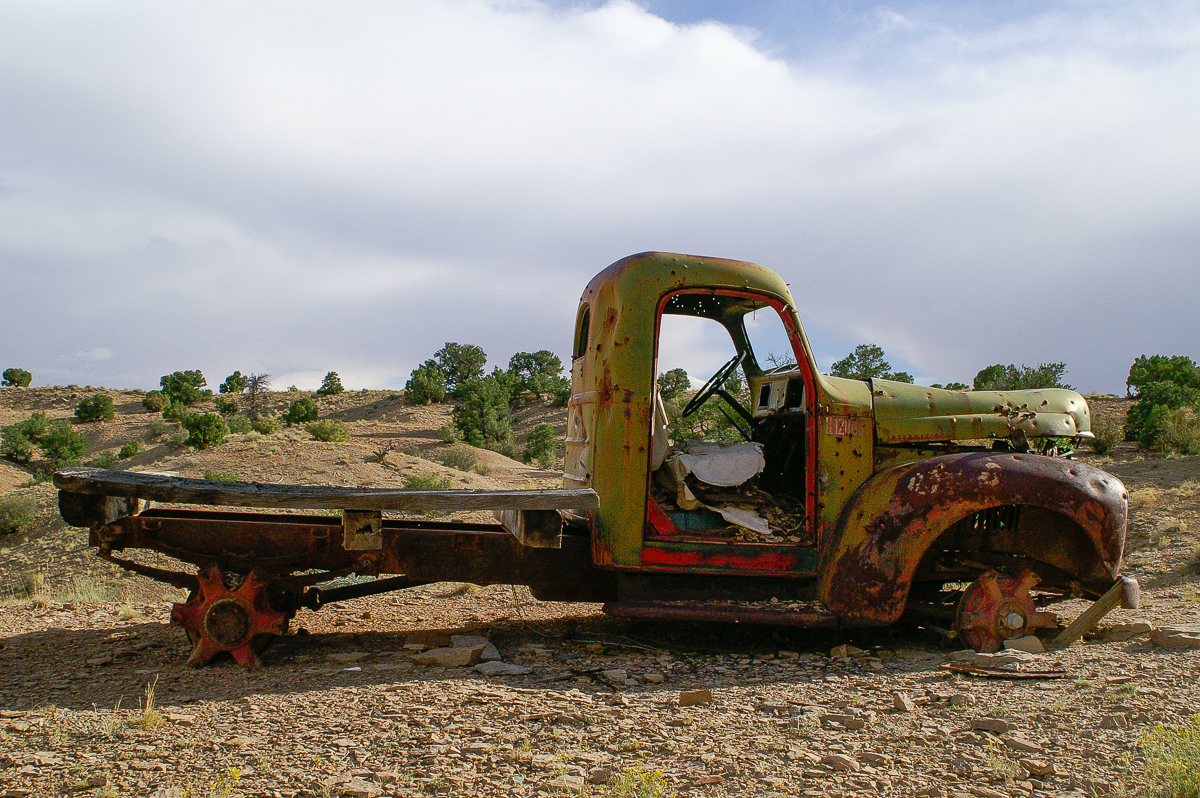 Quite astounding might be that a Lincoln Continental stranded here. 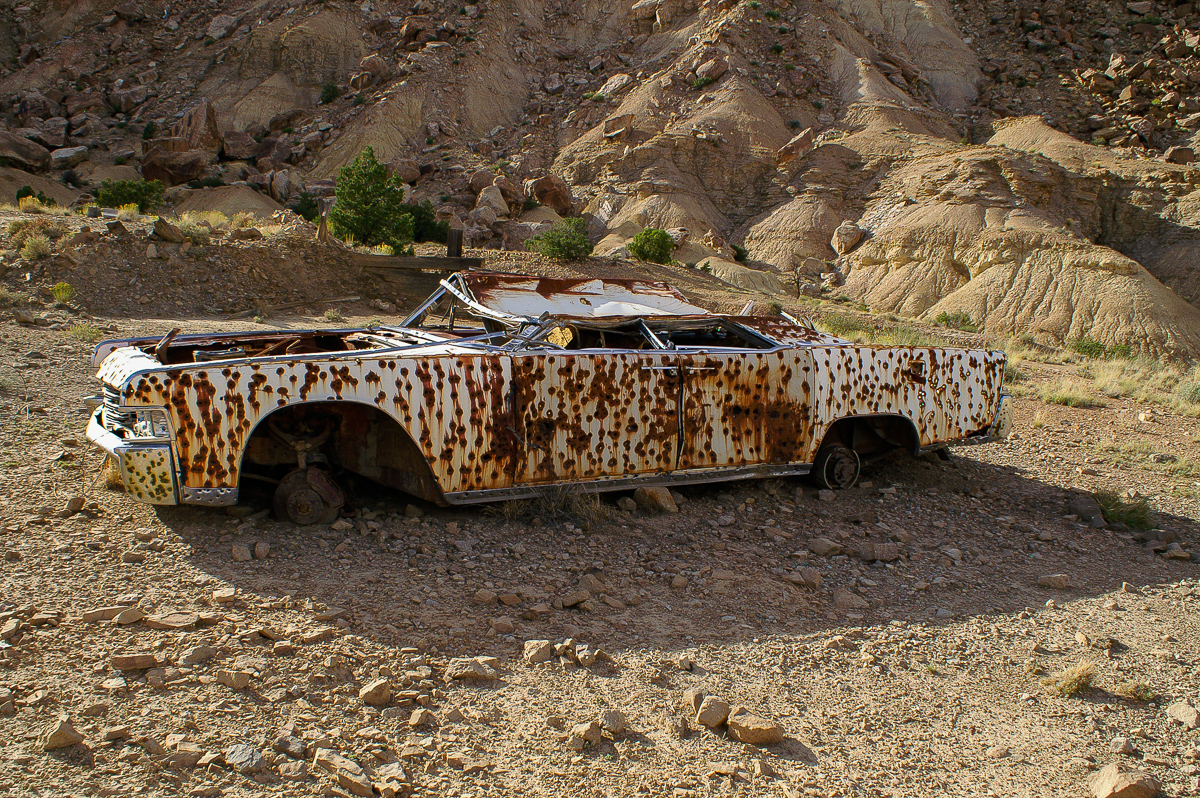 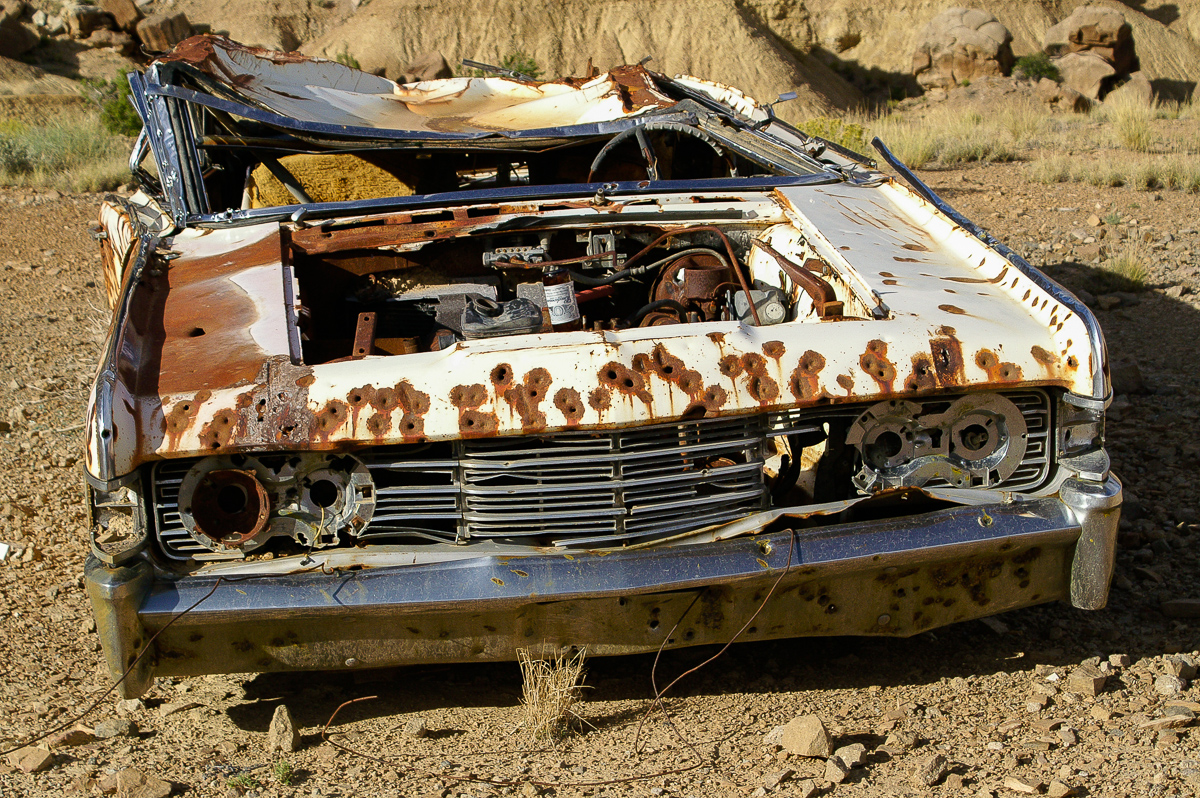 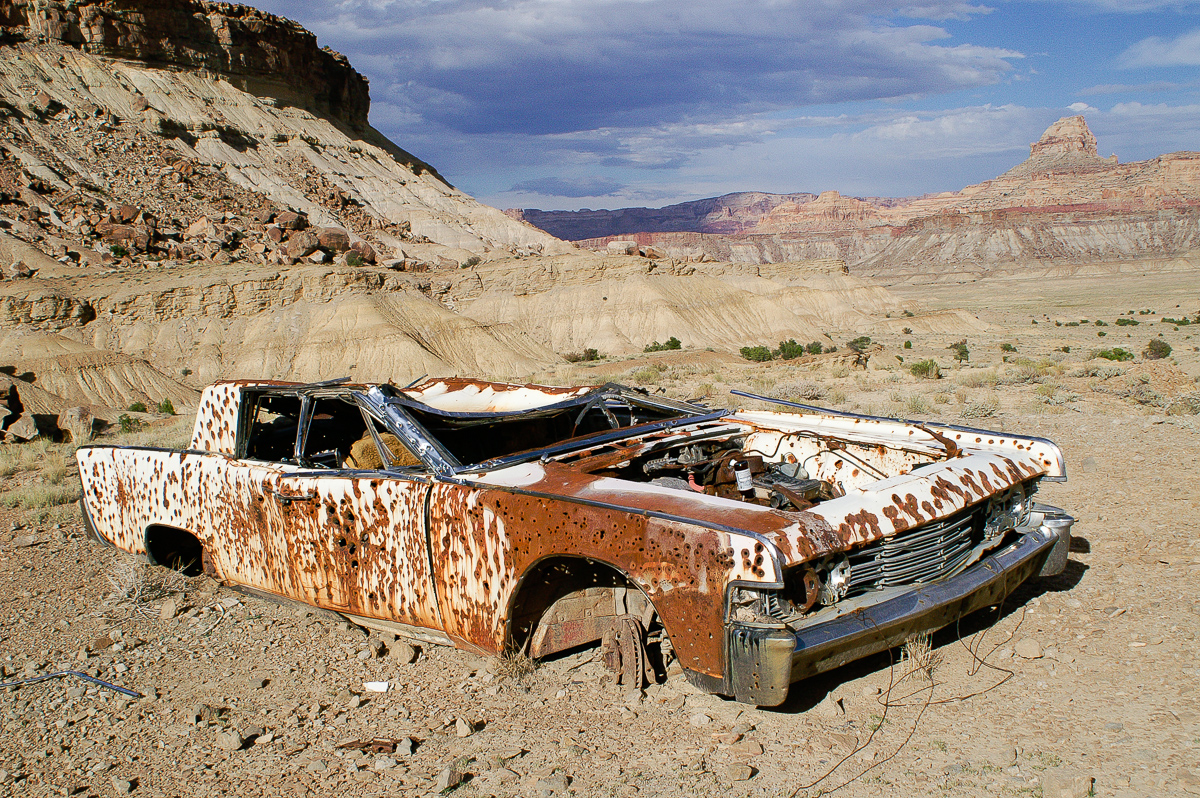 The car has disc brakes on the front axle - in the early 1980ies I got antediluvian cars with drum brakes on all four wheels from big rental companies in California. :eek2:

Some pictures from sediments next to the old cars: 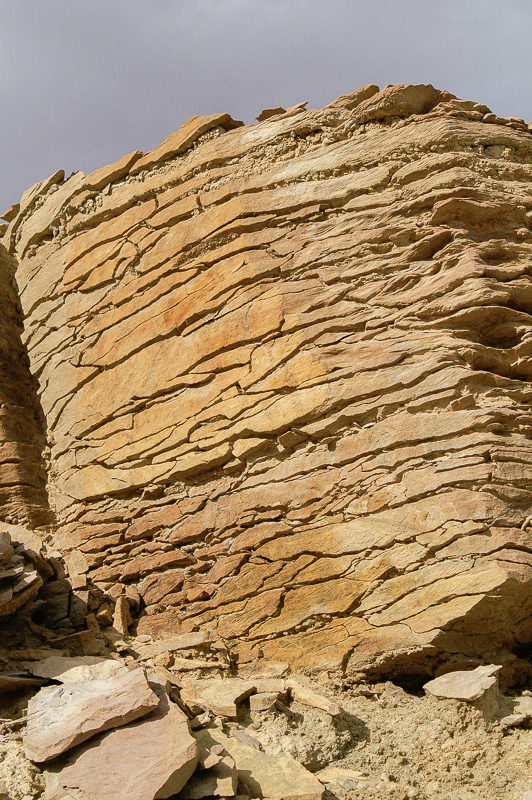 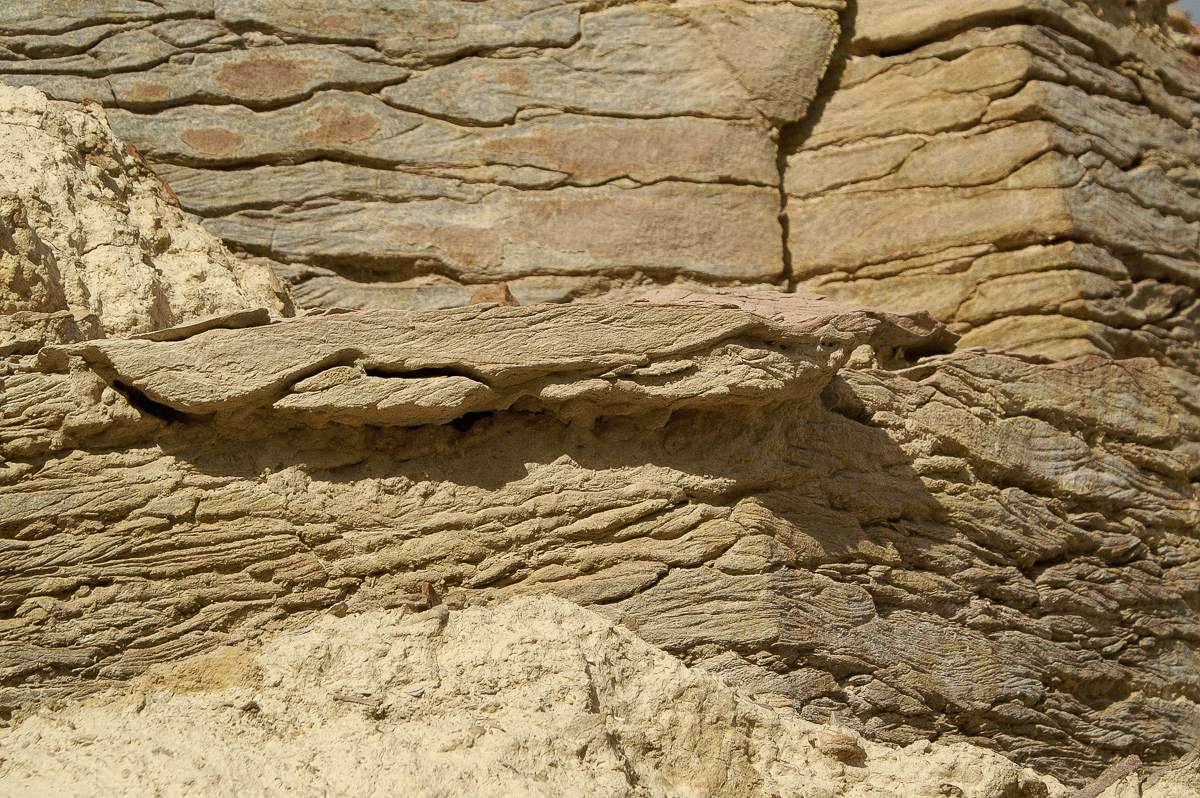 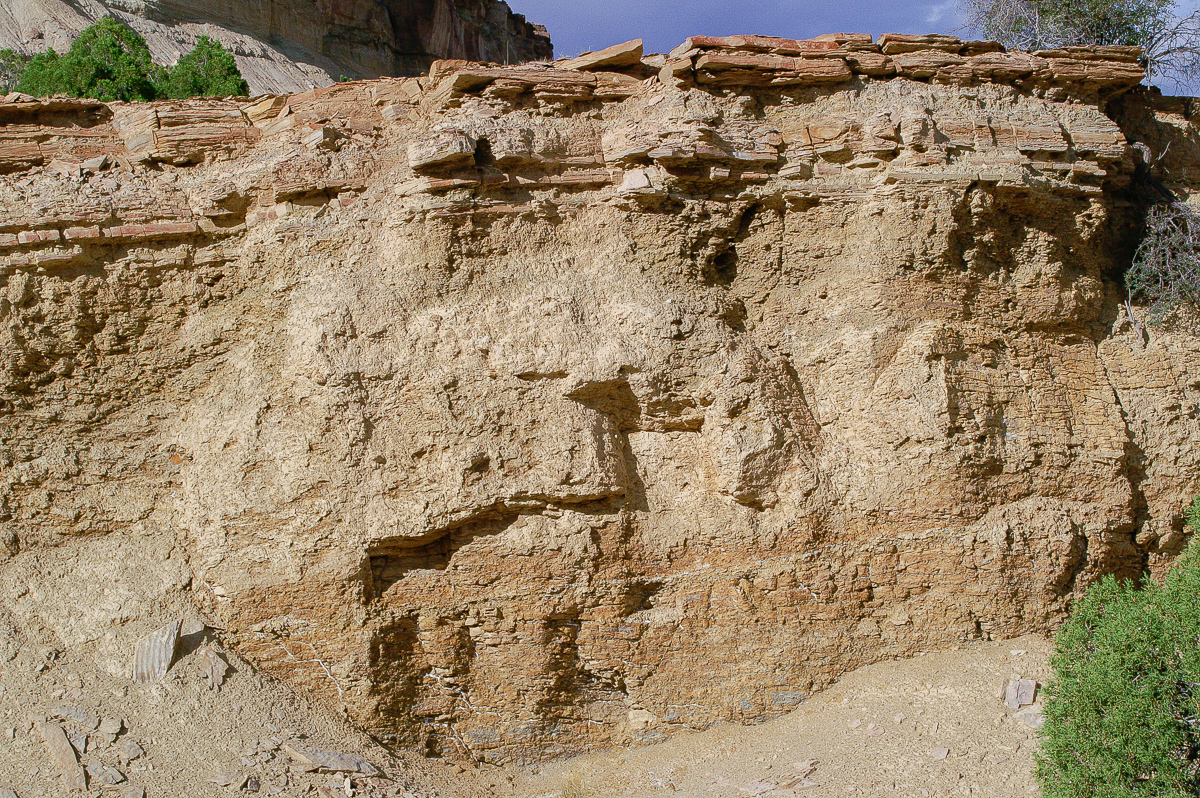 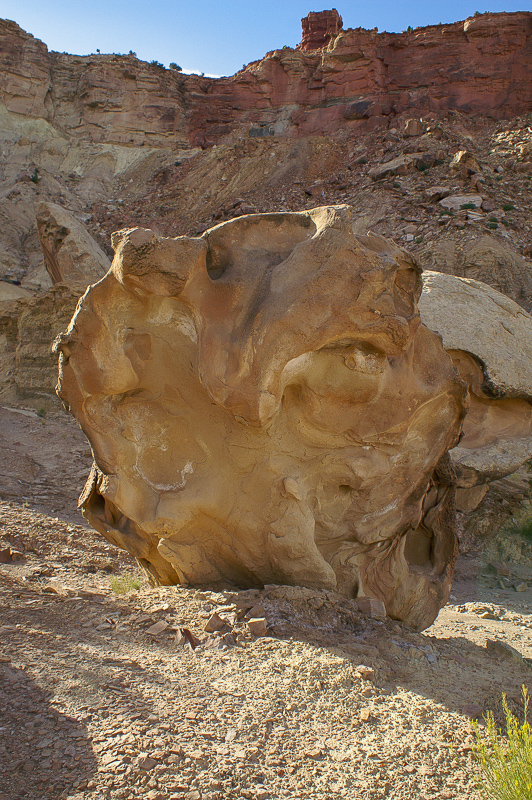 Eroded boulder (from the top layers?) 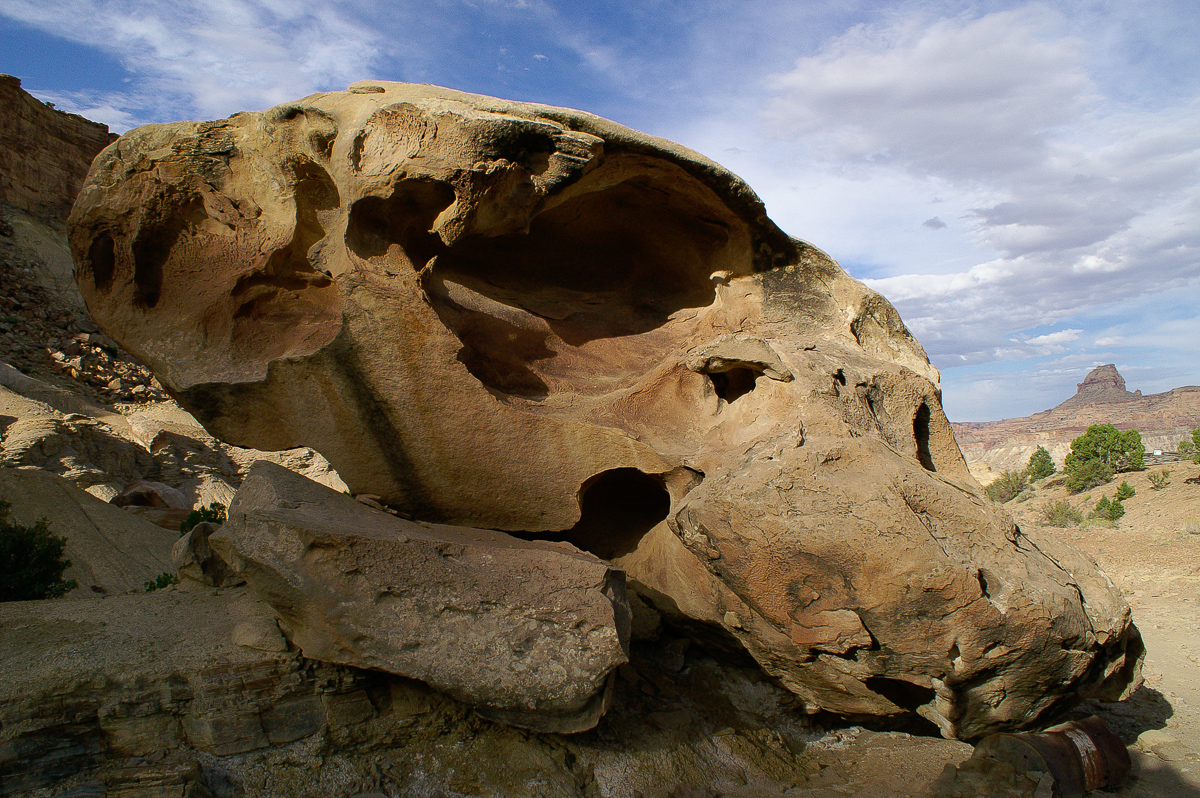 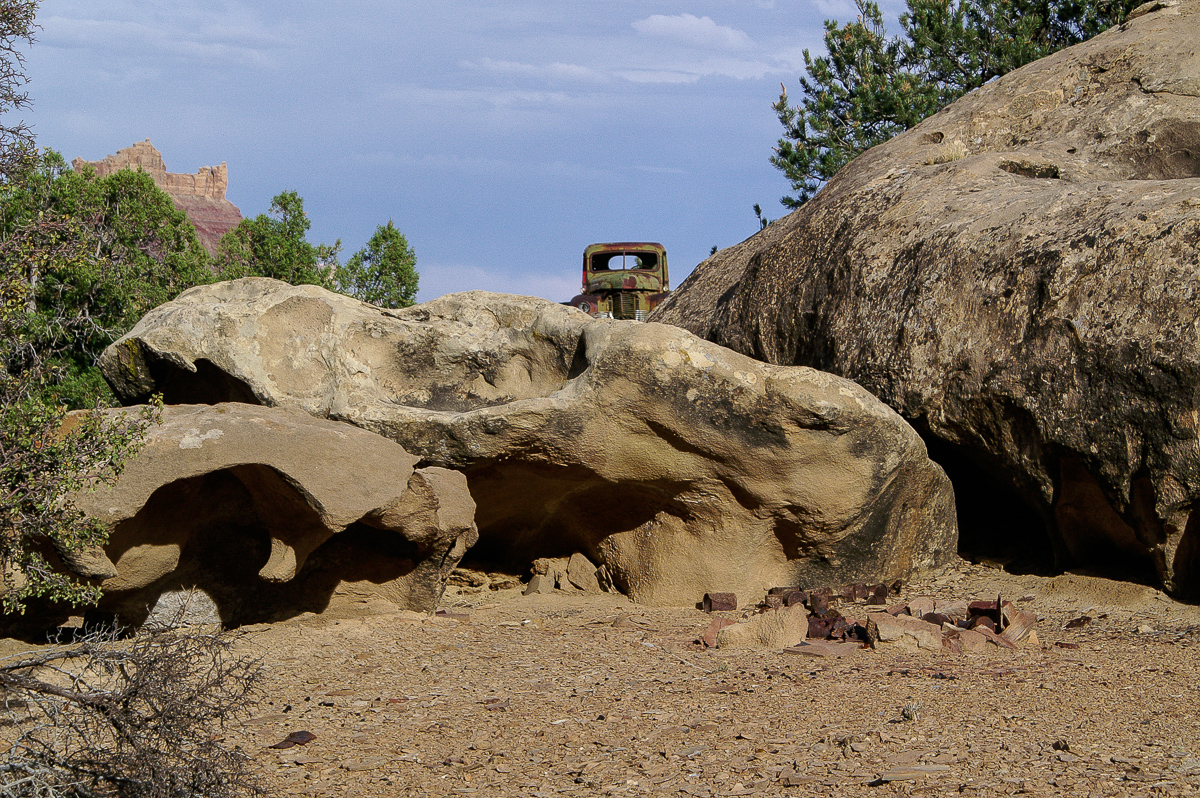 A truck is watching me 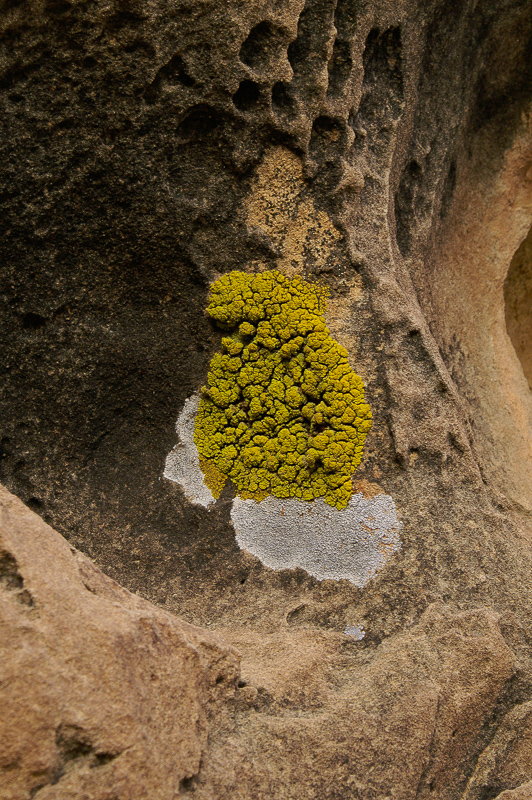 We are going south driving in the wash, encounter some springs creating short running streams of clear water. We know about Locomotive Point and Dutchman Arch lying on much higher elevation to the south but we also know that the trail up to Locomotive Point is a tougher one and we are in early evening. On this route we undoubtedy will run into the dark. 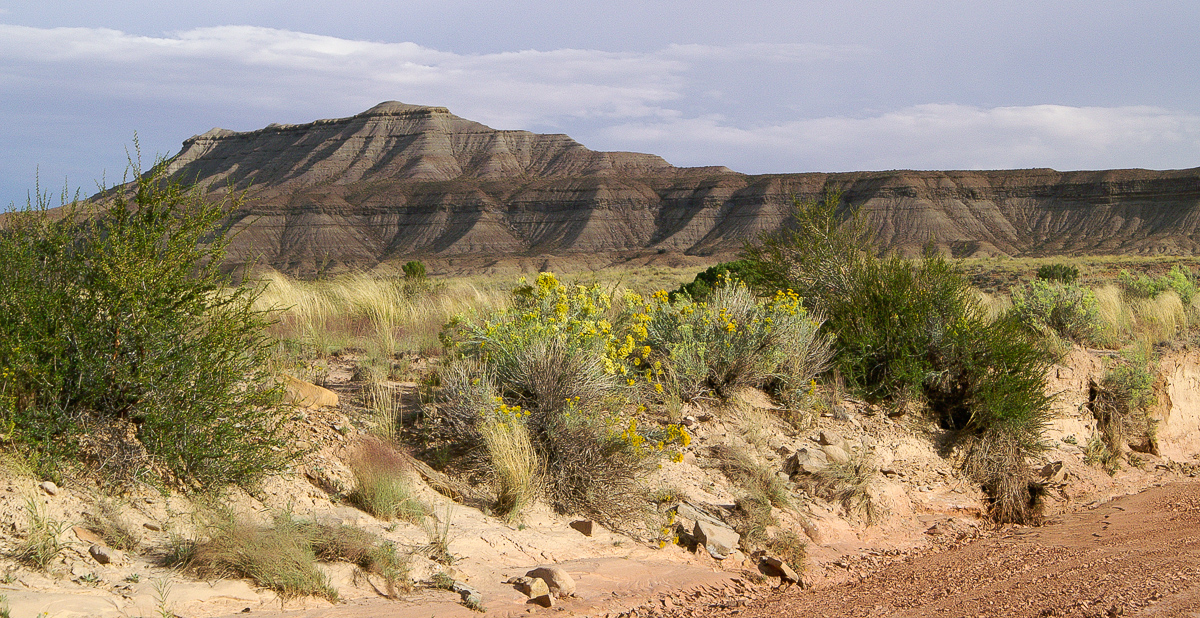 Between Cane Wash and Limestone Bench

Maps show trails on Limestone Bench and Oil Well Flat but these will lead back too far to the north. How about a trail in the vicinity of The Wickieup? Years ago we explored the area and found some even if the USGS Topomaps do not show one them as end to end. 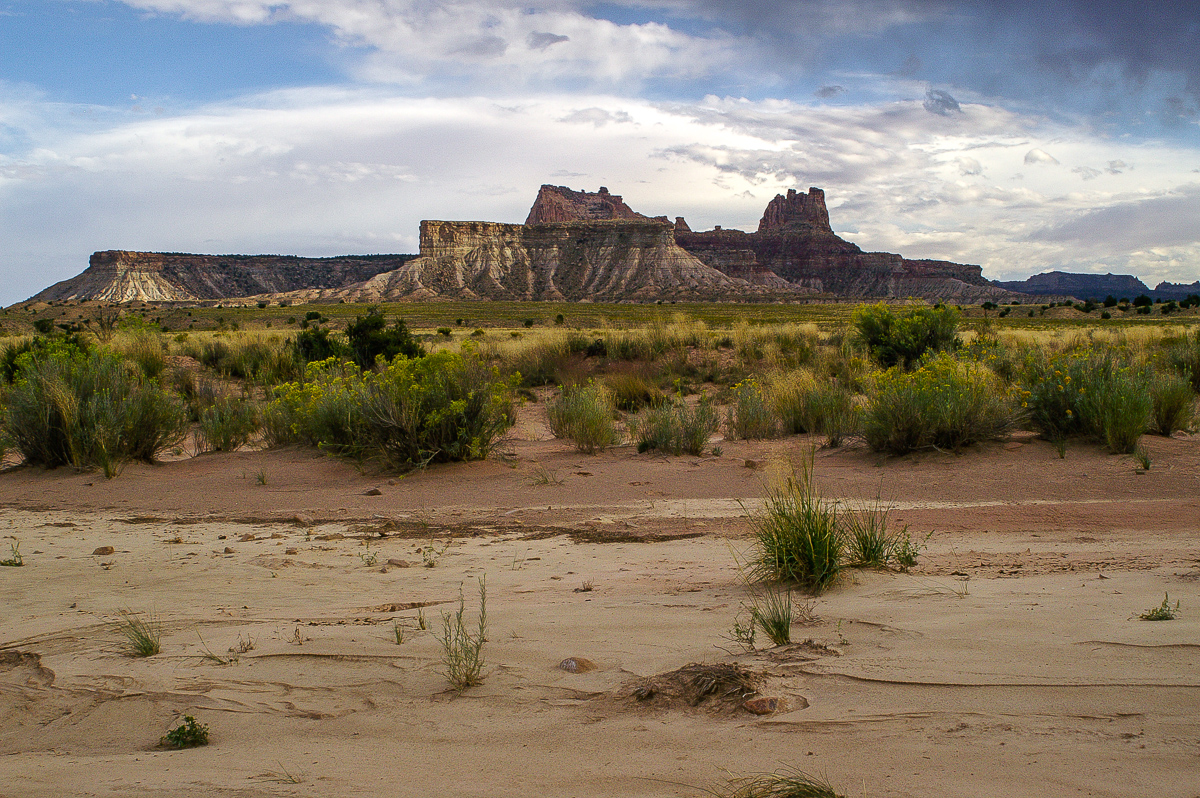 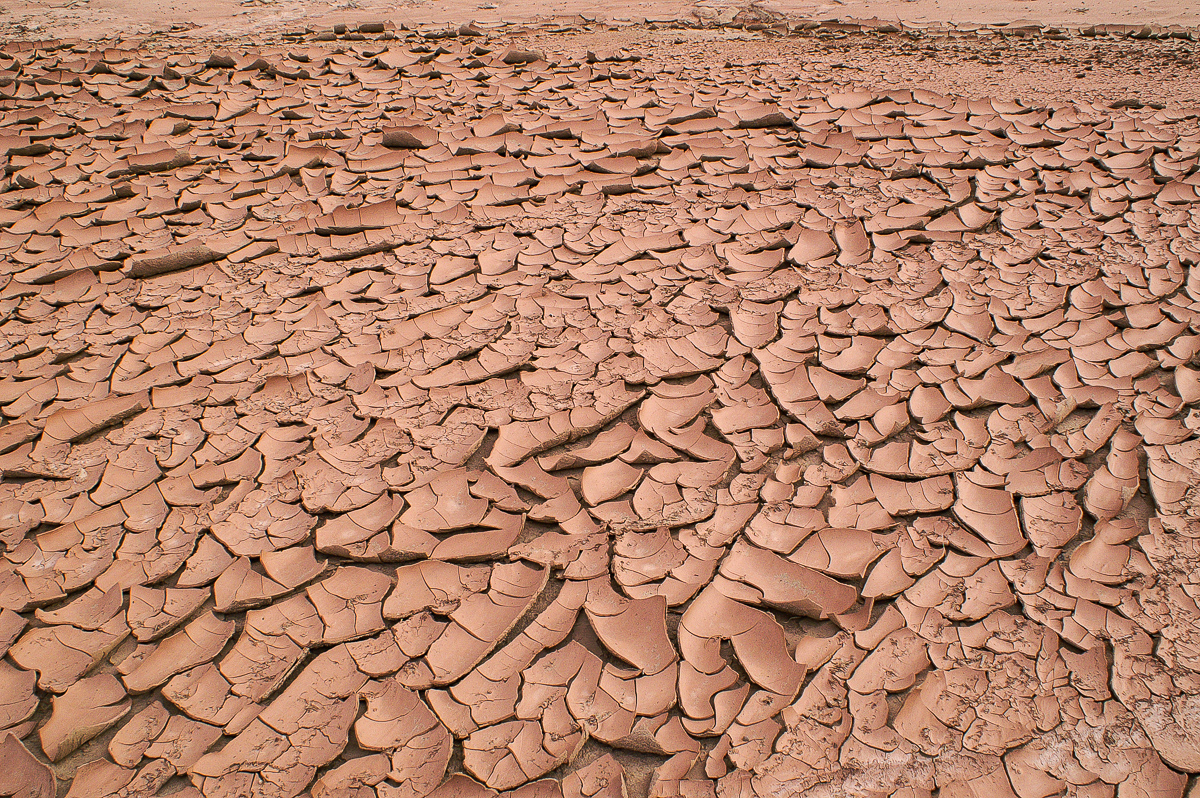 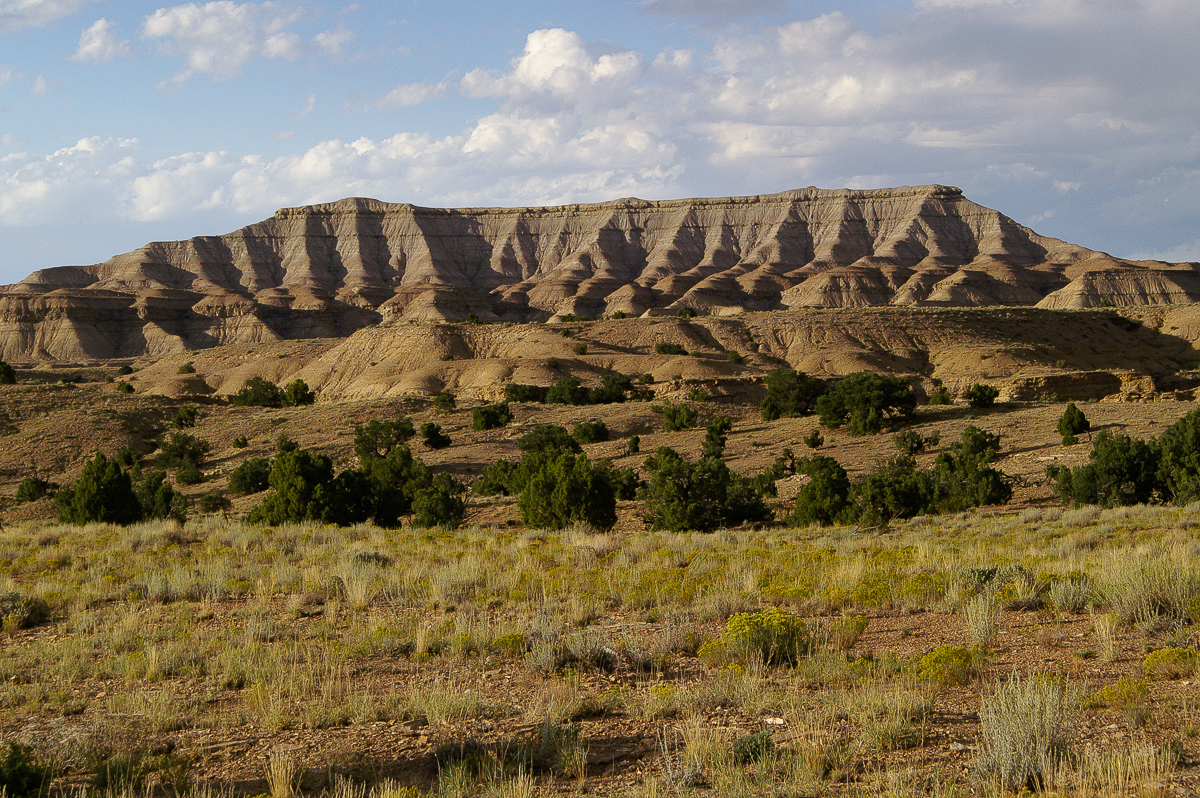 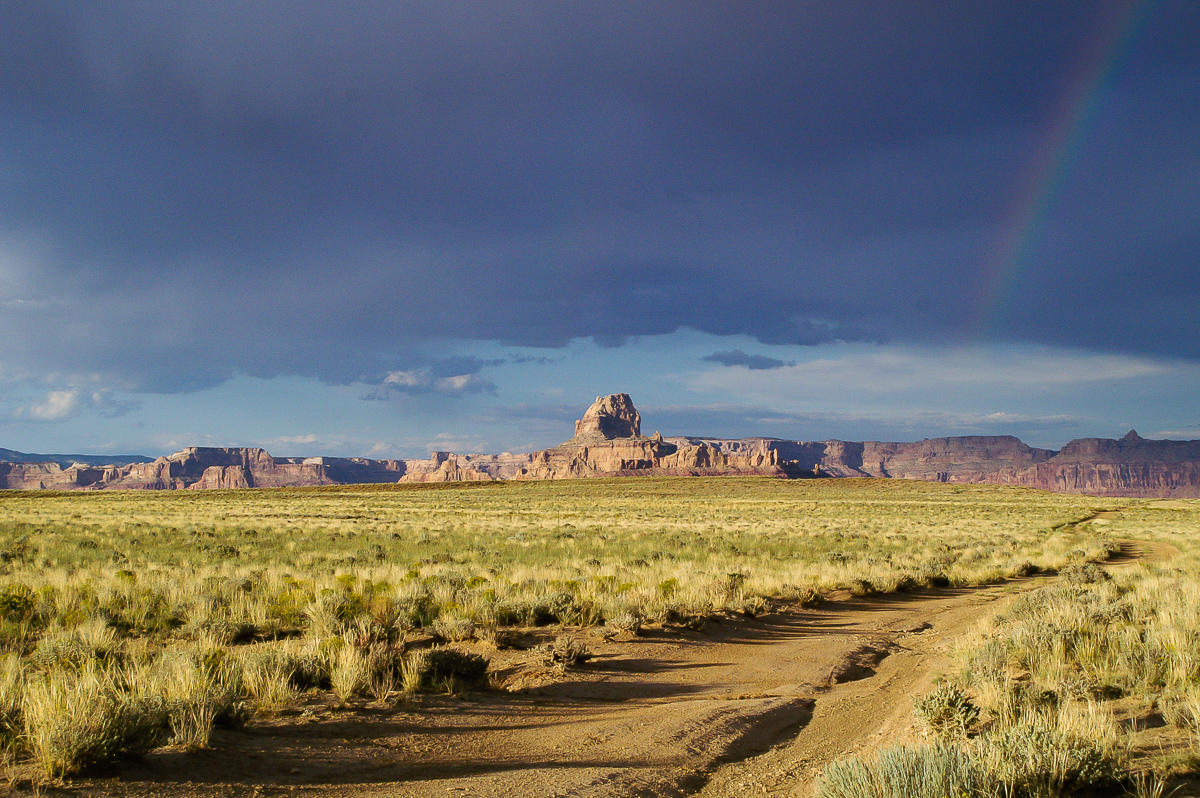 From a trip years ago we know about a trail south of The Wickieup but this time we want to use the other one through Road Hollow. This one is show on the maps.

Running into dusk we must cross running Oil Well Draw (thunderstorms hours earlier). The spur through Road Hollow narrows. We feel there is not much SUV traffic maybe more an ATV route. Some places are a bit tricky in the dark with our Grand Cherokee but we managed it to get through. 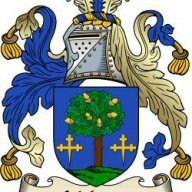 Fun Report! We've seen that old Pickup in person ourselves! There are hundreds of miles of trails out there! if your quadding the Devils loop is spectacular!

Those two vehicles are particularly cool. Love how the white finish on the Continental held up so well to being swiss cheesed!
IG: @backcountrypost

Are those bullet holes on the Continental?

Gotta be. They're just so evenly placed! I'm impressed at how few bullet holes the truck has.
IG: @backcountrypost
You must log in or register to reply here.
Similar threads