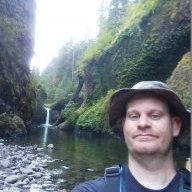 I found out, kind of last minute, that I was going to have some time for a quick trip this weekend. I try to have a couple of ideas ready, for just such occasions, so I quickly reviewed my list. Packard seemed to check several boxes: trailhead on Mirror Lake Highway so not a long drive, relatively short hike all on good trail, I had read about some really nice views and my hope was that since it was early in the season a normally busy area might not be too crowded. My only hesitation was that south winds were in the forecast and this area seemed like it would be exposed to winds coming from the south. I always seem to have that last crazy thought, especially when solo. On this trip it was “what if the wind blows a tree down on my tent in the middle of the night and I die in my sleep?” I pushed that thought aside and quickly threw my pack together. I would later find that the wind was much more of a blessing than a curse.

The drive up was nice. I stopped at the Kamas Chevron for a drink and recreation pass. For those interested, most of the campgrounds along MLH seemed to be open, except for Moosehorn. The lack of snow, in general, was noticeable.

Arriving at the trailhead Friday afternoon, I found several cars, but not what I would call busy, especially for the Highline TH. I checked the register and found most folks were headed to Naturalist Basin, with a few listing Packard as their destination. With that I headed down the trail.

The hike in was very pleasant with some elevation ups and downs between Scudder, Wilder, and then a final drop into Wyman/Packard. I opted for the trail that follows the eastern shore of Wyman before hooking around and entering Packard from the south. I jumped across the Packard outlet and made my way along the south shore, passing one group (the only group I would see at Packard that night – thanks to Gene and crew for excellent backcountry etiquette – I barely knew you guys were there). I then found a nice campsite along the berm that separates Packard from the big drop into the Duchesne River gorge.

Wilder Lake on the hike in 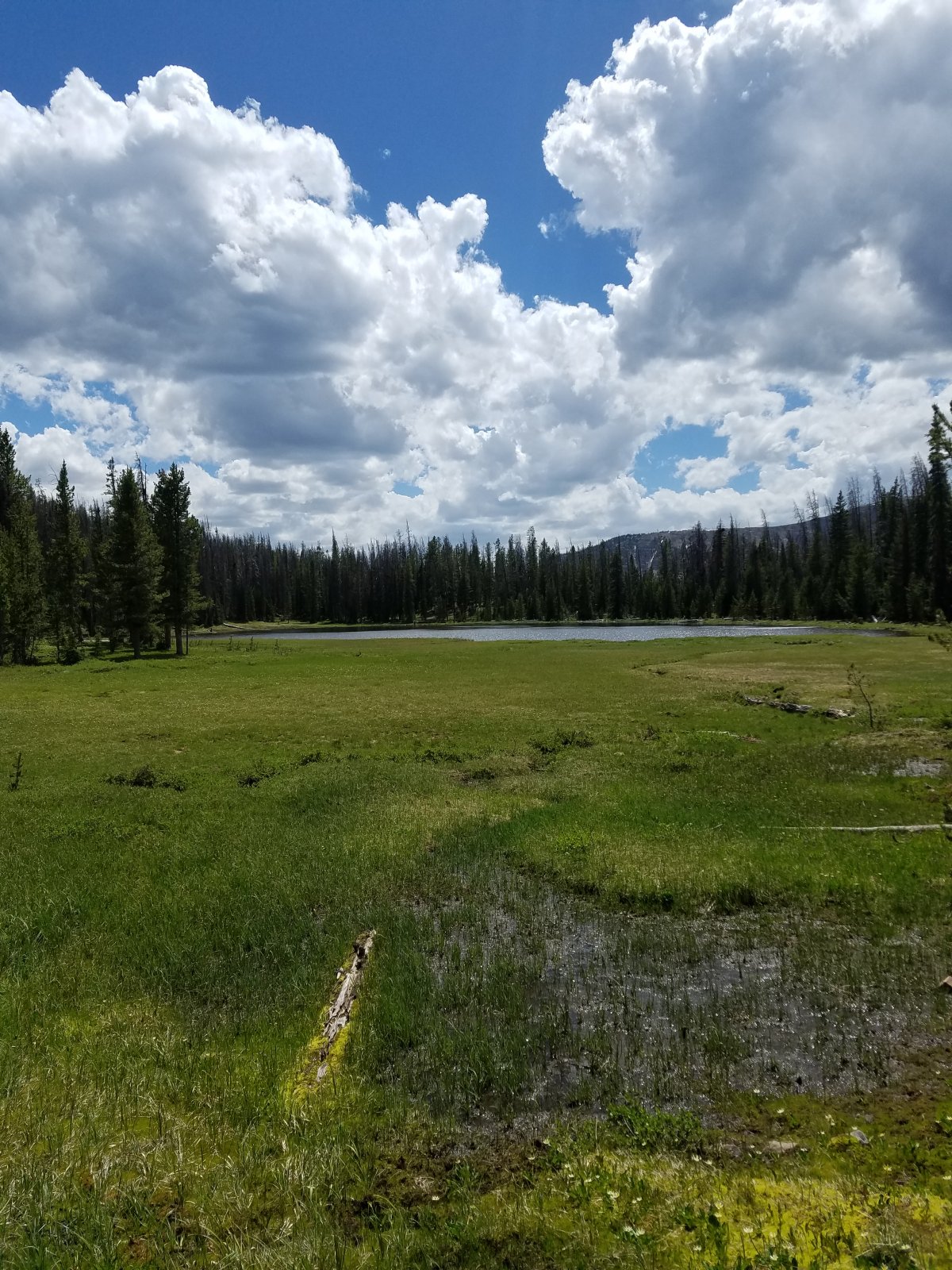 Wyman Lake with Agassiz in the background 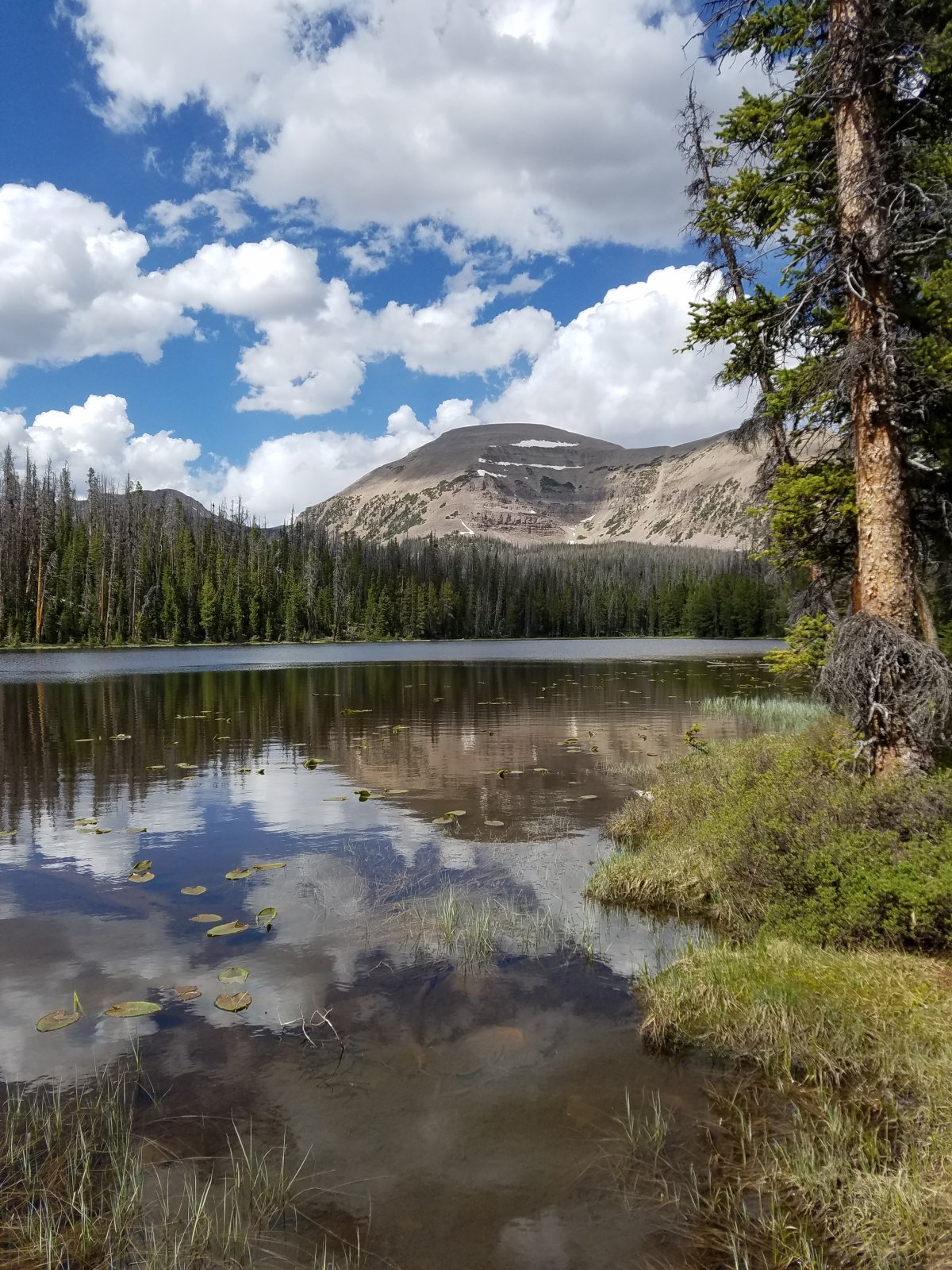 After setting up camp, I decided to explore the area a little. I had heard of this amazing view and got a little sneak peak as I was looking for a campsite, so I set off to find a good vantage point. Turns out, my favorite view was right where the outlet from Packard flows of the cliff band and into the gorge. I bet this is a pretty little waterfall when viewed from below. Here are couple of shots of the vista from this point: 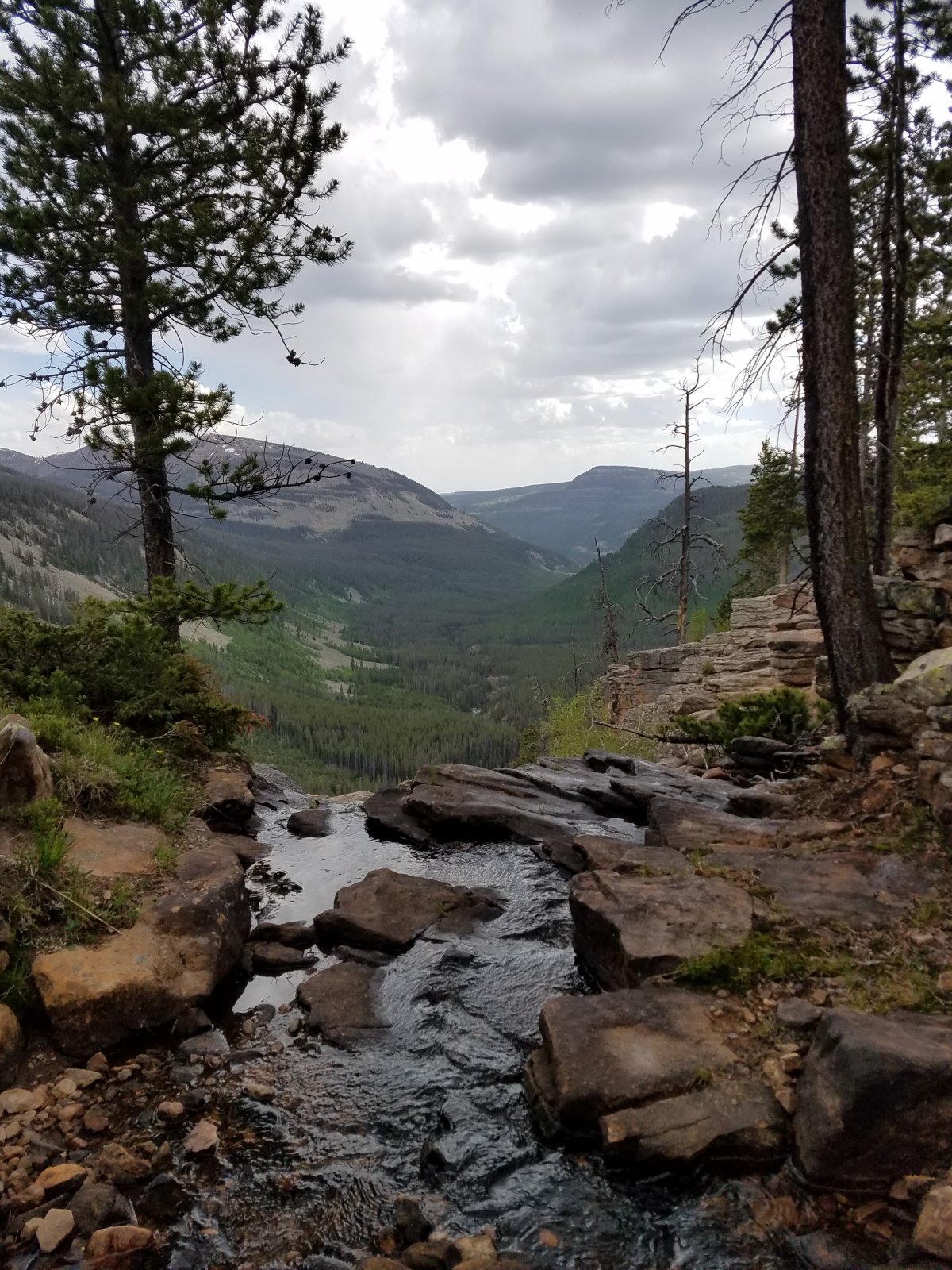 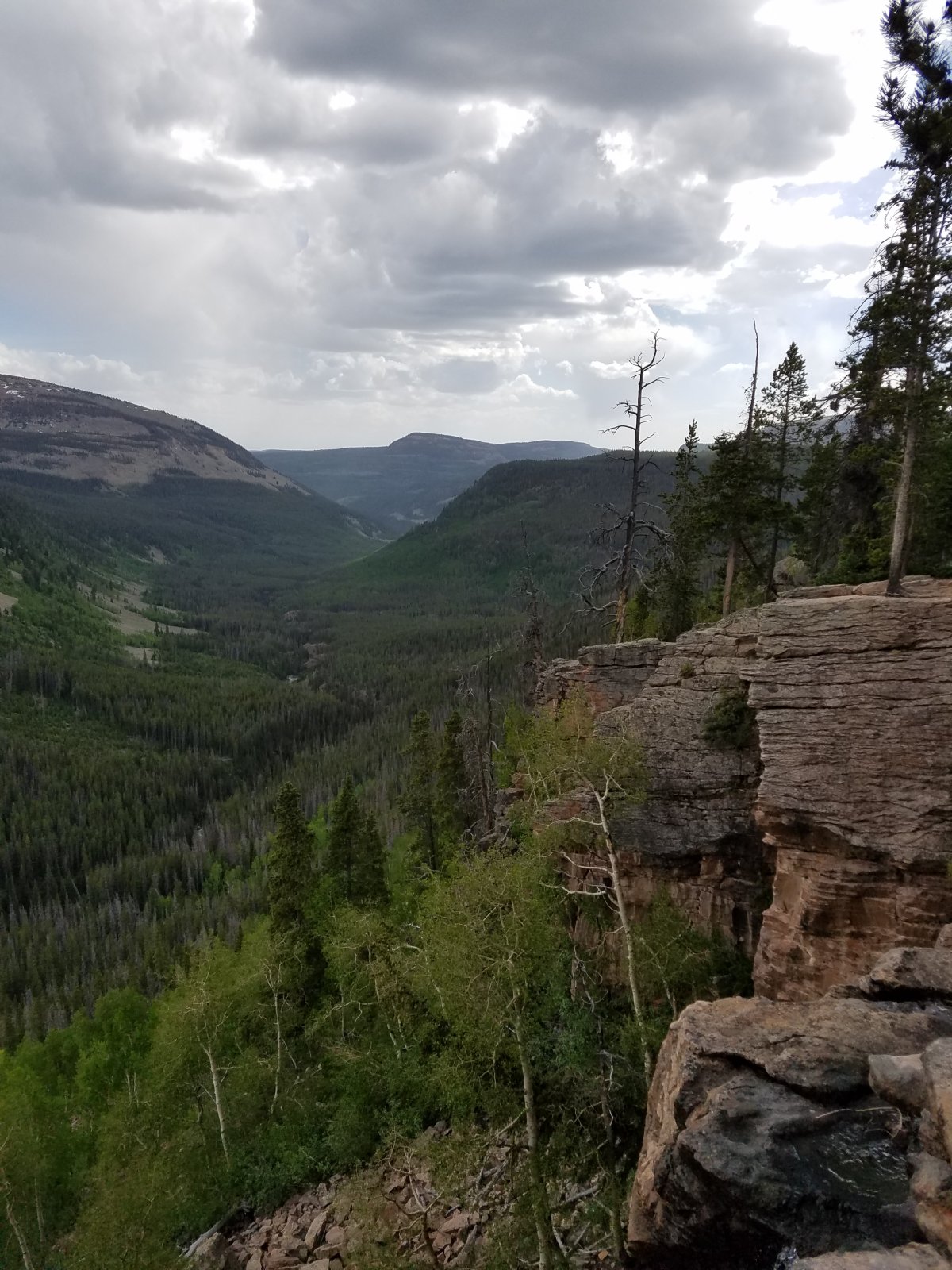 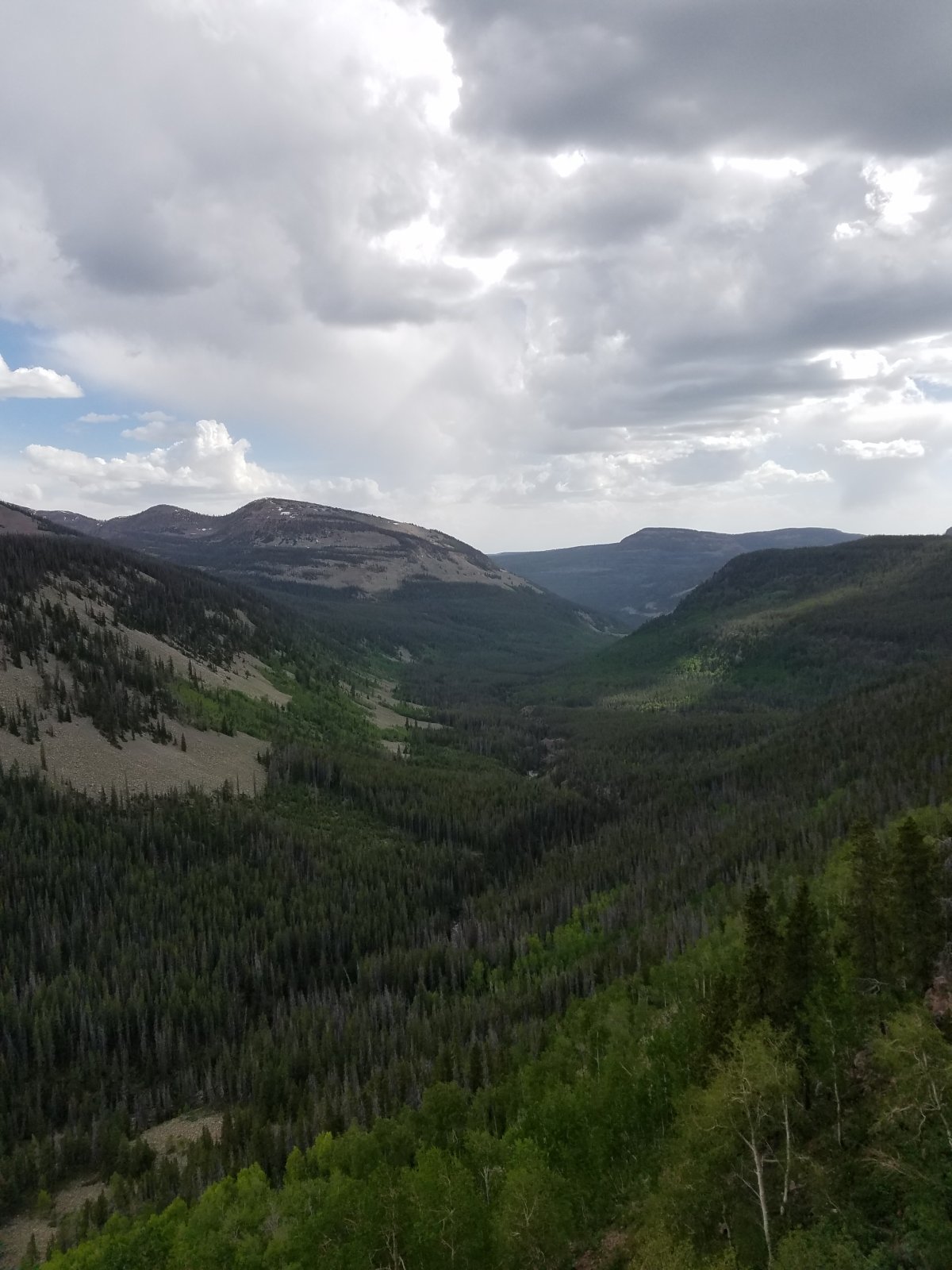 My pics don’t even come close to doing it justice.

After checking the view for a while, I decided to return to camp. I tried fishing for a bit, but found it generally slow. I did catch a couple of brookies and even one tiger. Here is a shot of one of the brooks: 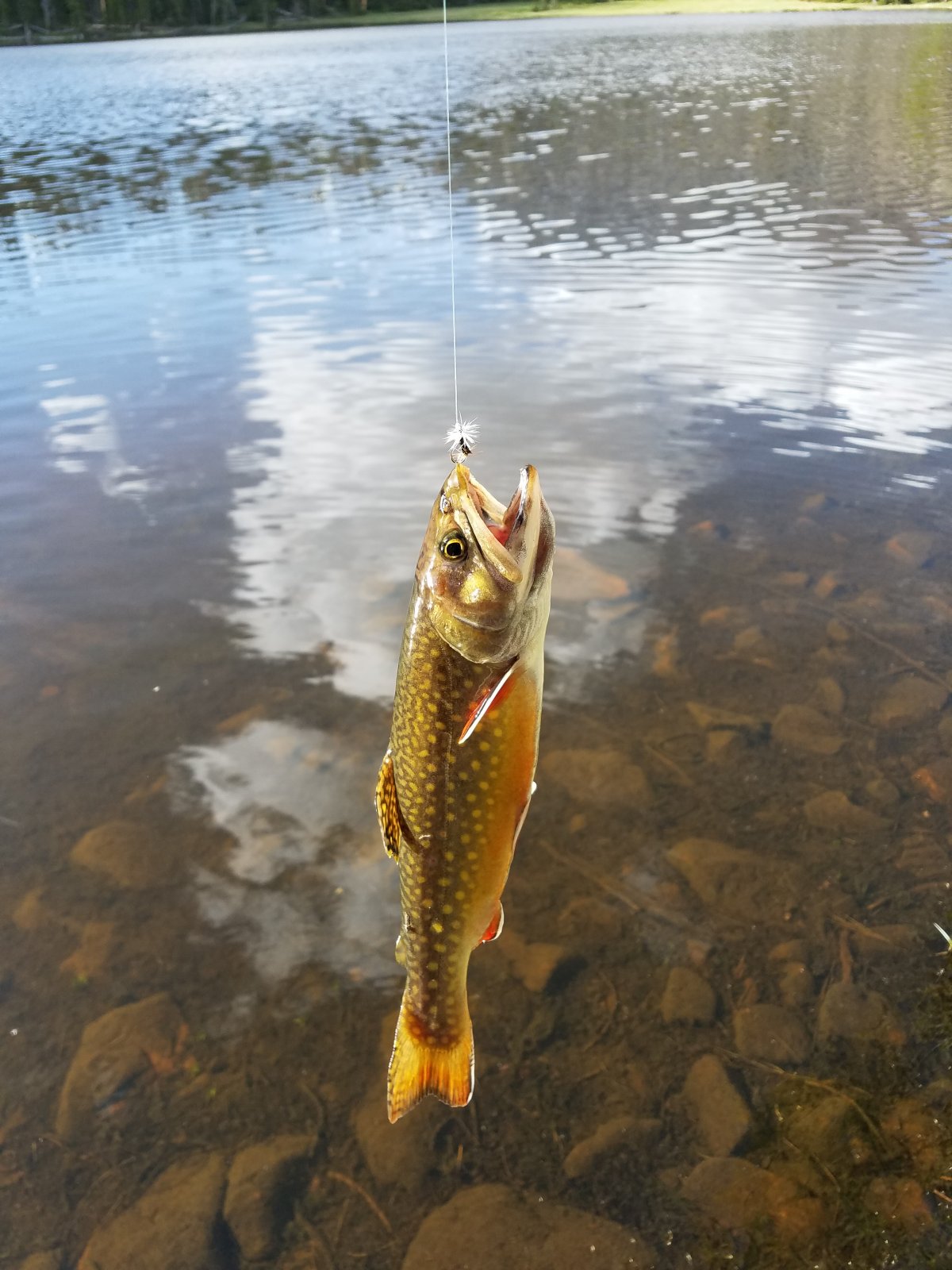 Since the fishing was slow, I returned to camp for dinner. Around this time the mosquitos got really bad. Luckily, the wind was blowing over the gorge and onto the berm just south of camp. I ate my dinner, sitting on a log, overlooking the gorge with a nice breeze keeping the bugs down. The wind I was worried about, ended up being a great benefit to me this trip. My camp was placed such that I could go over the berm for some nice breeze and no bugs, but my tent was placed in a spot on the other side of the berm, sheltered from the wind.

After dinner, I walked down to the lake for a couple more casts. No luck with the fish, but the sunset was great. I was probably a few minutes late with this shot: 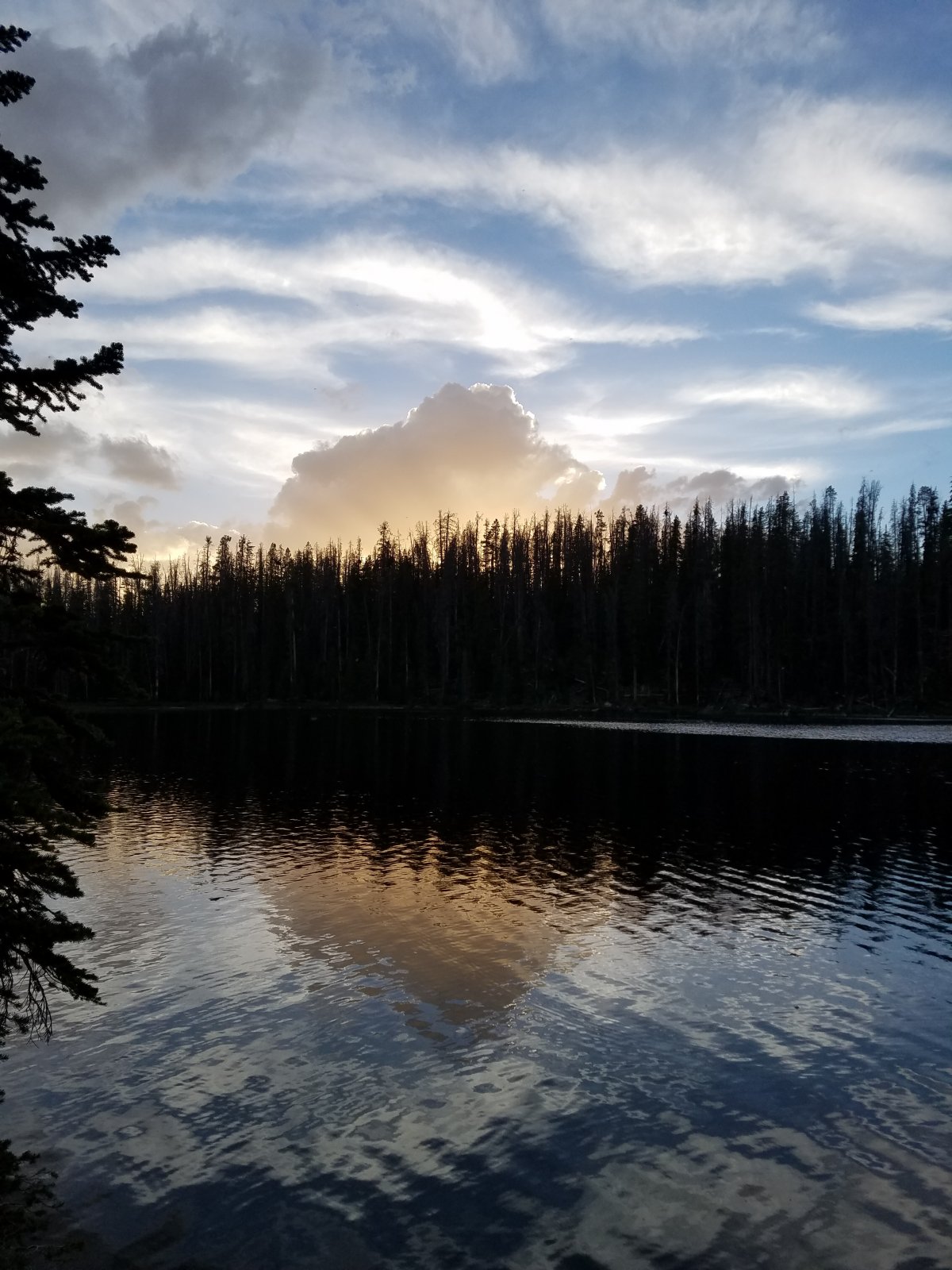 The next morning, I awoke to relatively mild temps. I had to be back home by early afternoon, so I made a quick breakfast and started packing up. Before leaving, I snuck down to the shore for a view of Agassiz reflected in Packard: 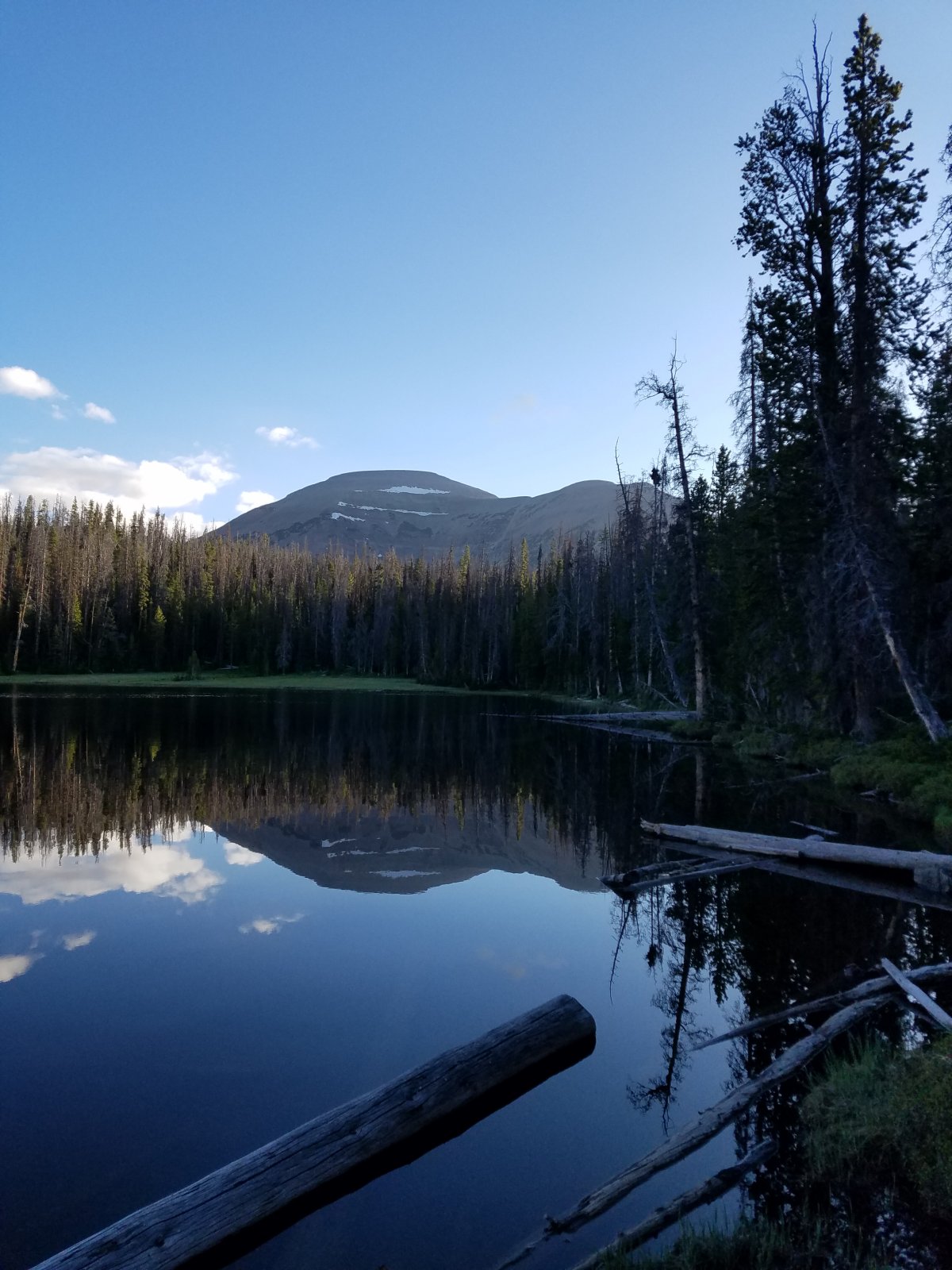 The hike out was pleasant. I only encountered a couple of people on the Packard Lake spur, but Highline was busy. I passed several groups with various destinations and I arrived back at the trailhead to find many more cars than the day before.

Wyman inlet on the hike out 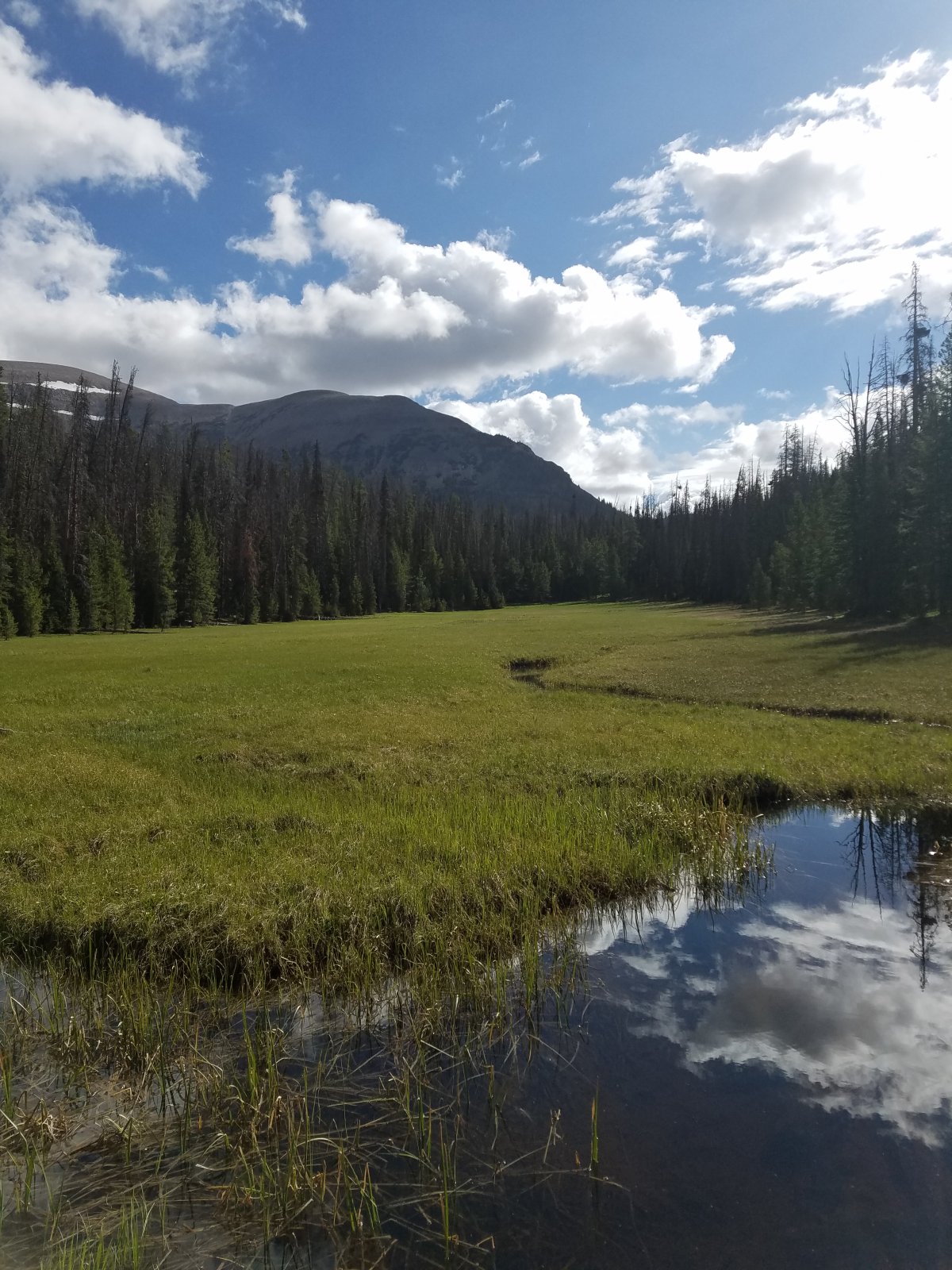 Overall it was a very nice trip. I enjoyed great weather, saw a new area of the Uintas, and tried out a couple pieces of new gear – all in less than 24 hours away from the valley.

Love the shot of the outlet just before it falls off the cliff.
Do not pray for easy lives. Pray to be stronger men. - JFK
Orem Chiropractor

Awesome report and pics! I have always wanted to go to those lakes. Looks like you had quite the balcony/porch right by camp. Reminds me of the one we had at Rhodes Lake. The winds last weekend at Teal Lake for sure kept the bugs at bay so I'm glad to hear they were in your favor as well. Nice Brookie!

No idea where this is, but it looks awesome
My trip reports: backpackandbeer.blogspot.com 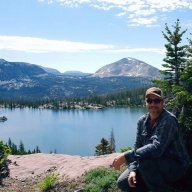 Nice report and pictures! Yes pictures don't do it justice (like usually) as experiencing it for yourself. I went here a few years ago and your right. The view from the outlet of Packard is amazing. I could just sit there and look at that all day.

So lovely!
You must log in or register to reply here.
Similar threads