Another great day trip with easy driving from Calgary, overlooked by the masses at a busy trailhead across the road from ours on September 4. Starting off with a fast walk of 4km on an old dirt logging road- which is common for hikes along the Smith-Dorrien road- a rough hiker trodden route led into our chosen valley. After a short bit of winding forest trail, it was time for a steep grovel up to a plateau at the edge of the alpine: 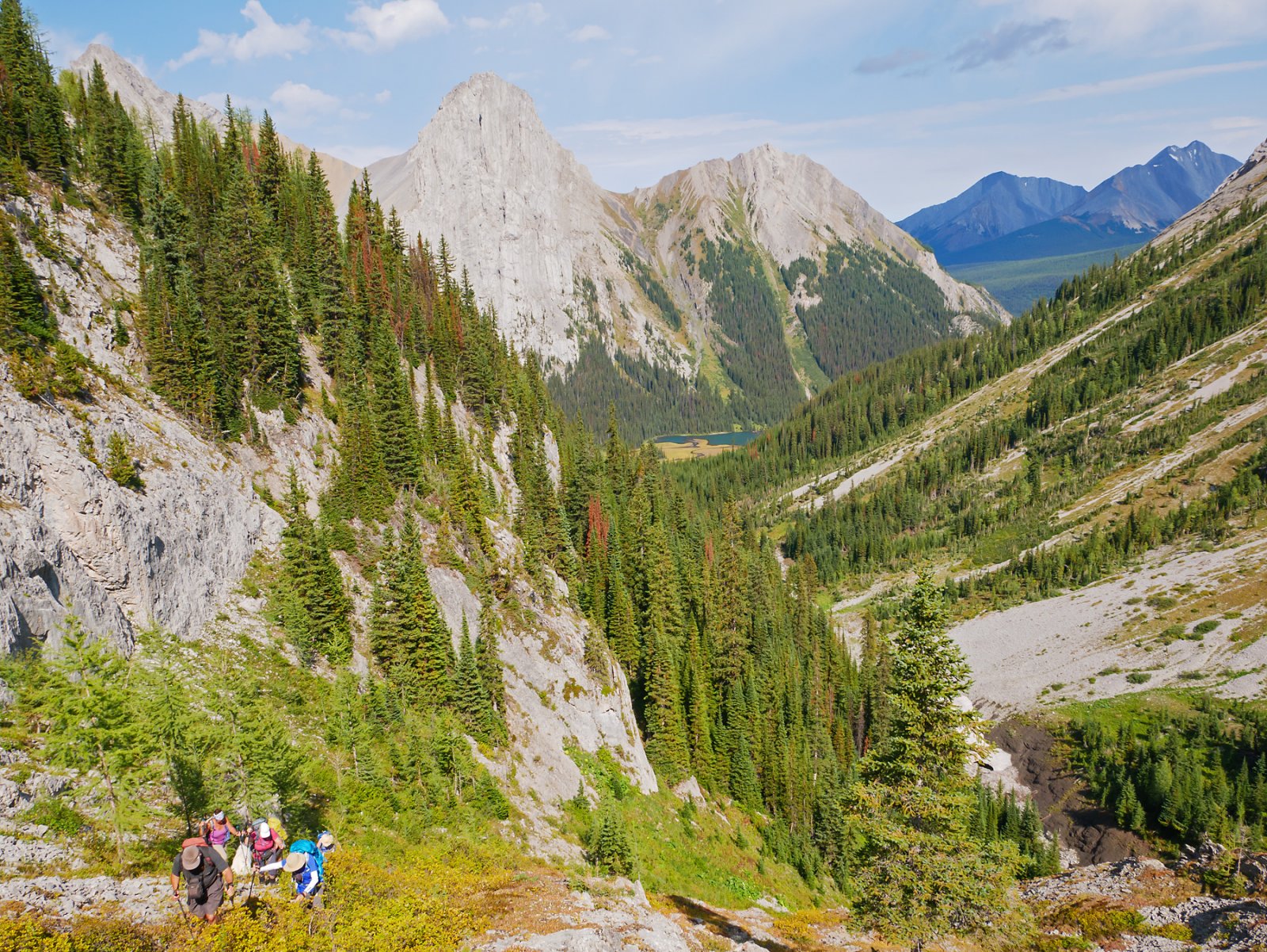 Ragwort was still in bloom in the treeline larch glades: 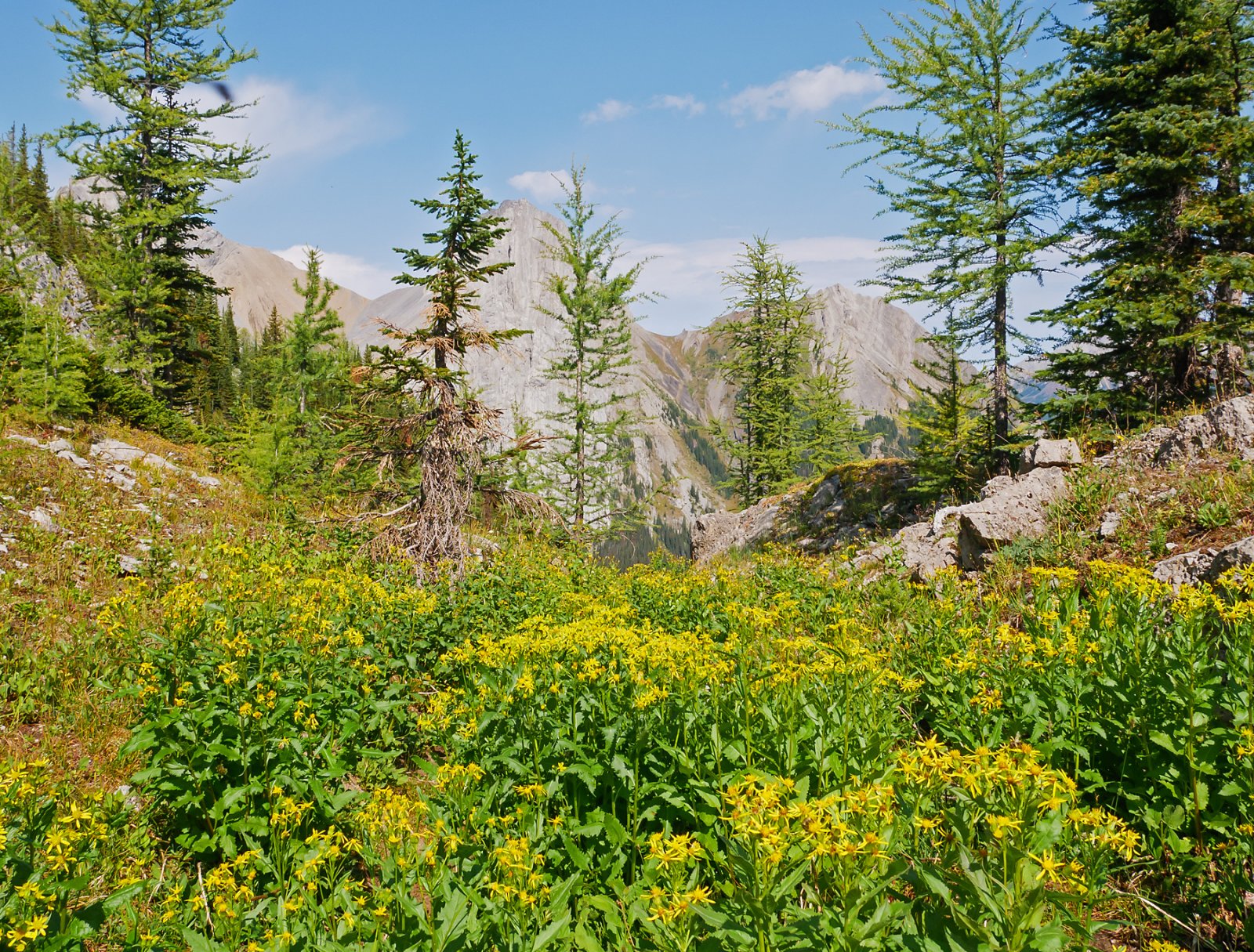 One of many bees taking full advantage of the waning days of summer: 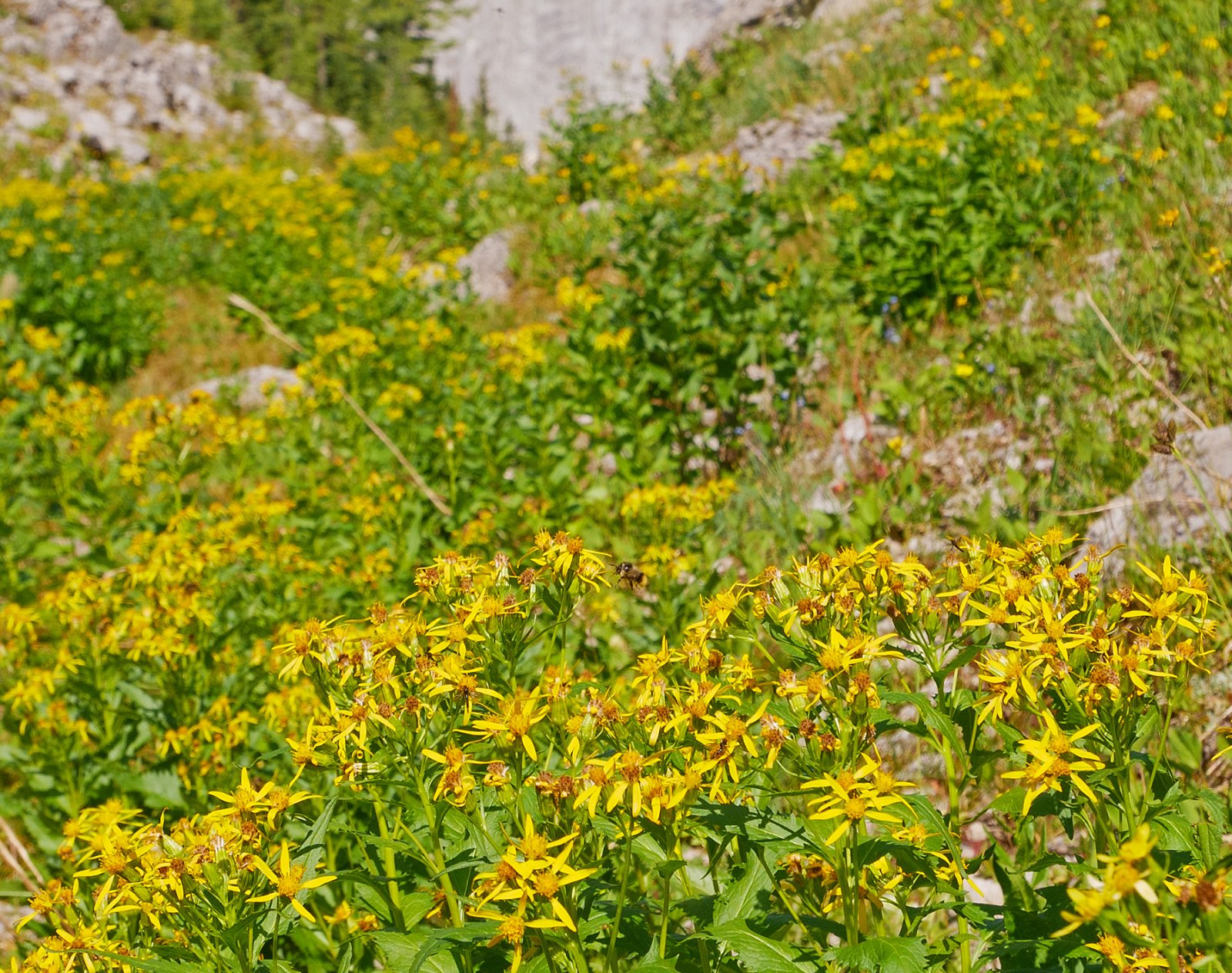 Stopping for lunch with our rather large group of friends, on a flat part of the ridge leading to "Piggy Plus". About that name, which is un-official but commonly used:
Legend has it that it was dubbed that after what may well have been the first ascent, by teenagers based out of a youth camp which operated nearby for a few years in the 1970's, inspired by a couple of nearby peaks also bearing porcine monikers: 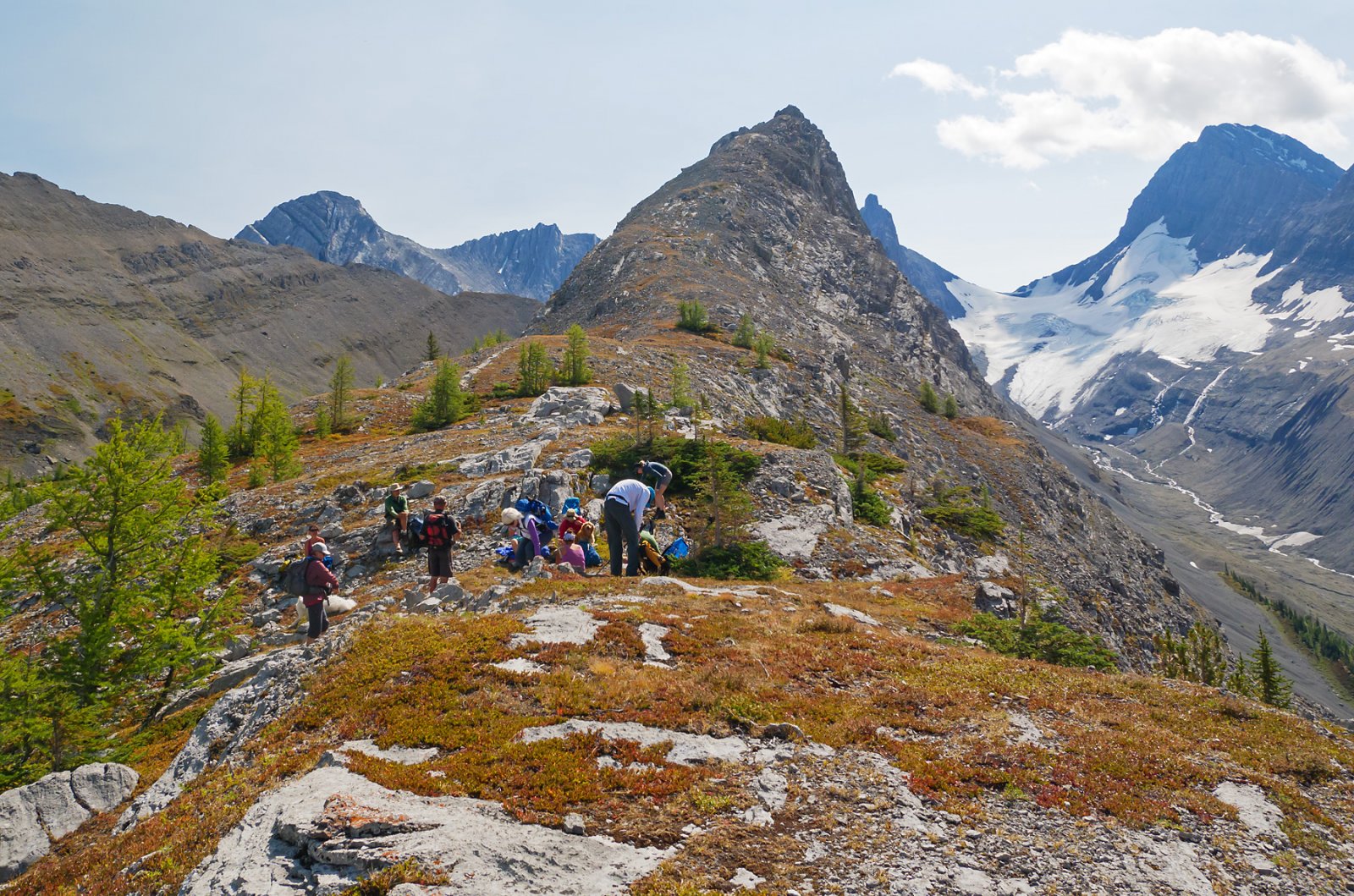 A panorama looking back. Trailhead is in the valley around the far right corner.

Mount Birdwood dominates, with Mount Assiniboine peeking out to Birdwood's left in the distance. 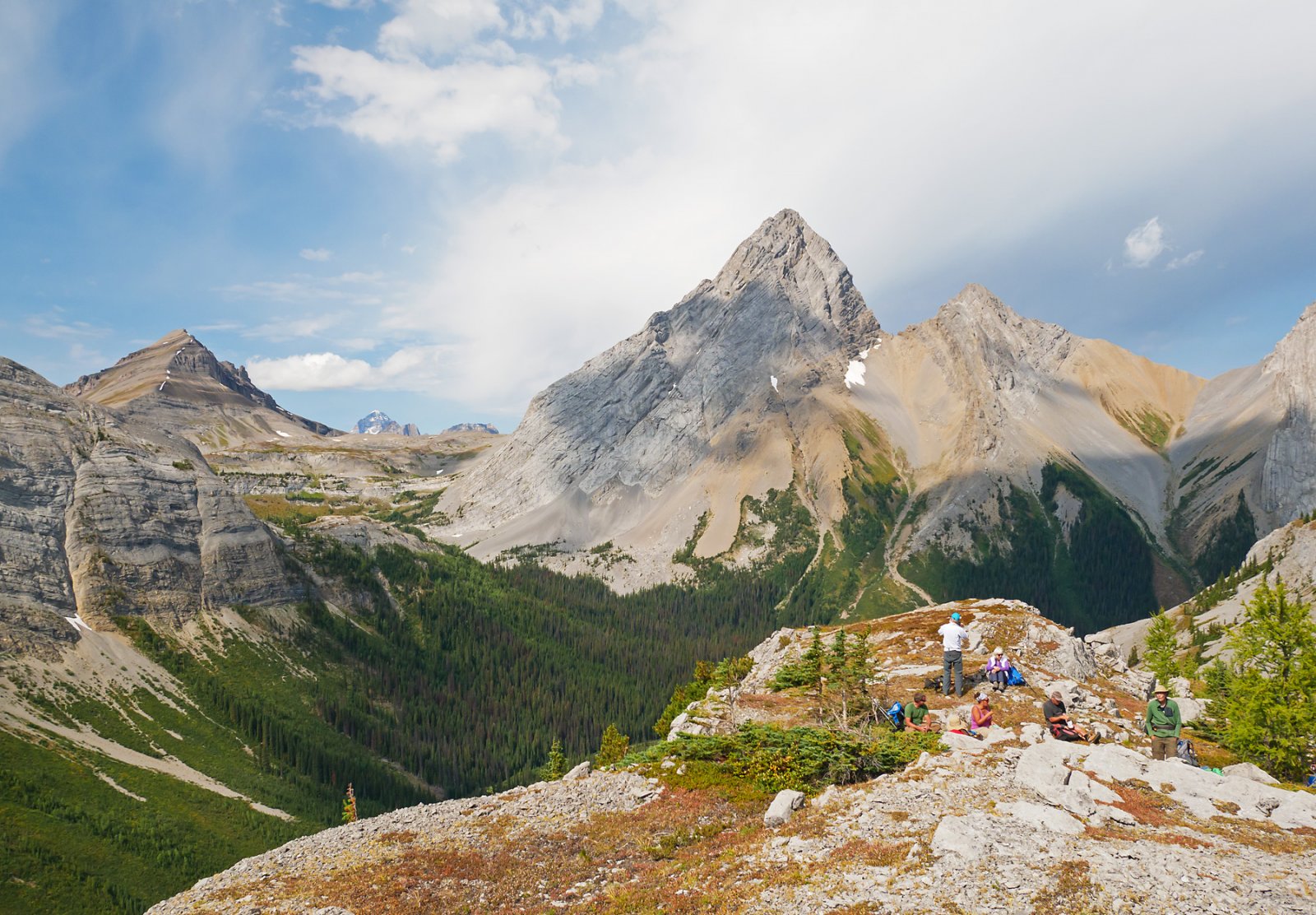 Below to the west- the Robertson Glacier, a popular spot for early and late season skiing. Conditions don't look very friendly for that today: 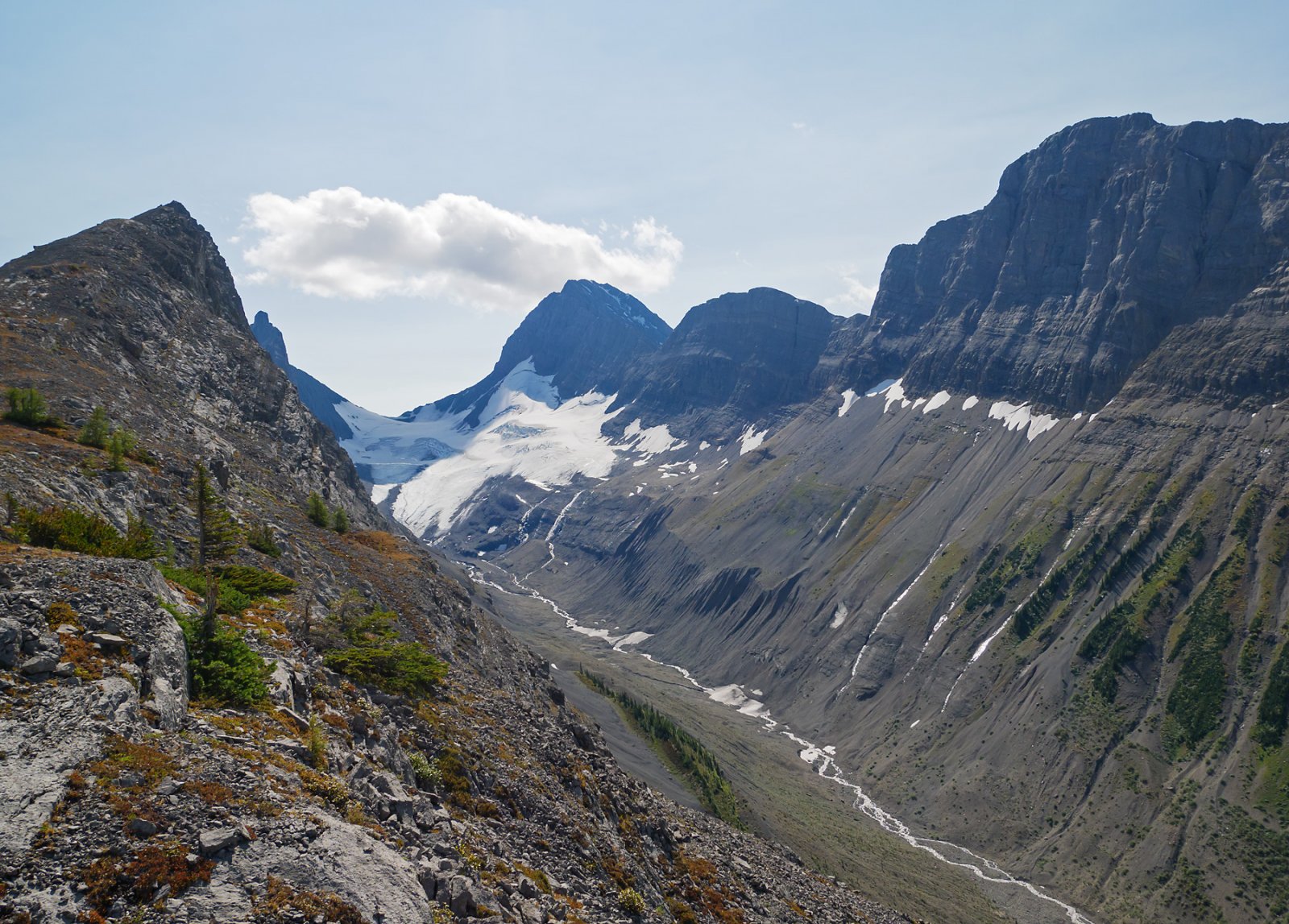 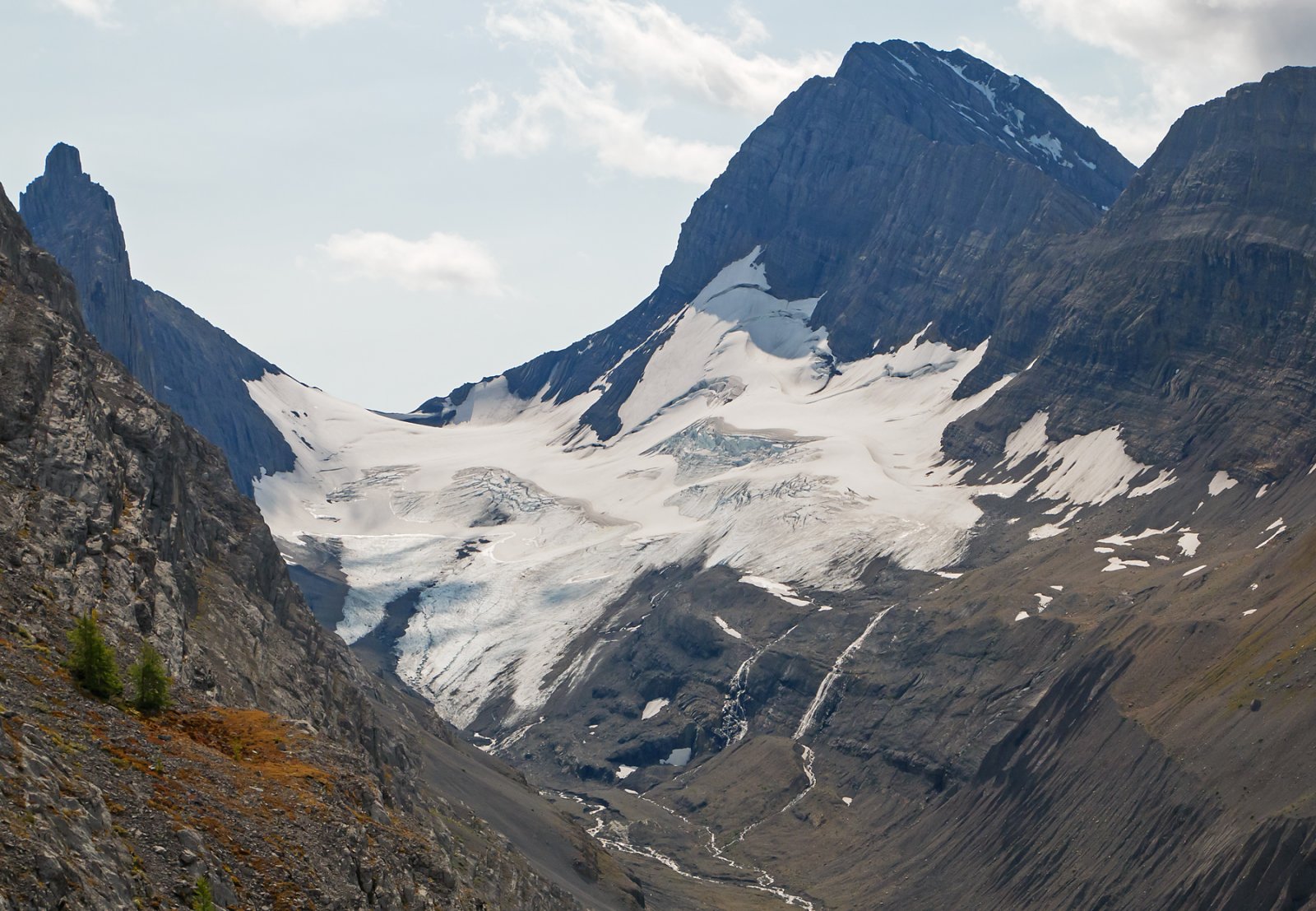 Done with lunch, and heading across the larches and meadows in a limestone karst setting. Our next stop is the col ahead below Piggy Plus, reached by a short stretch of talus and boulders. Spot the hikers? 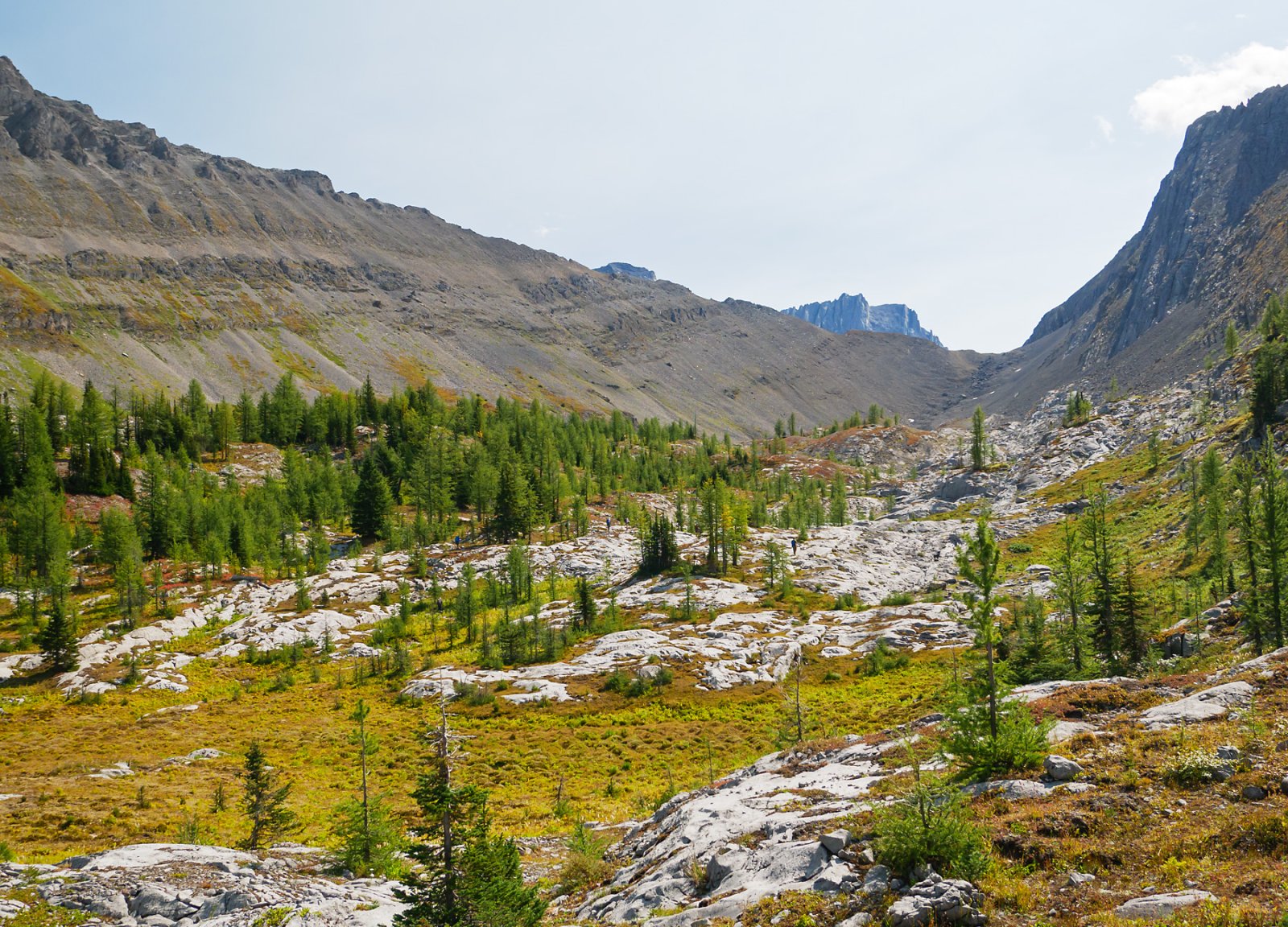 Fall colors beginning to appear, along with the alpine larch trees looking a bit more yellow-green, than a week ago nearby: 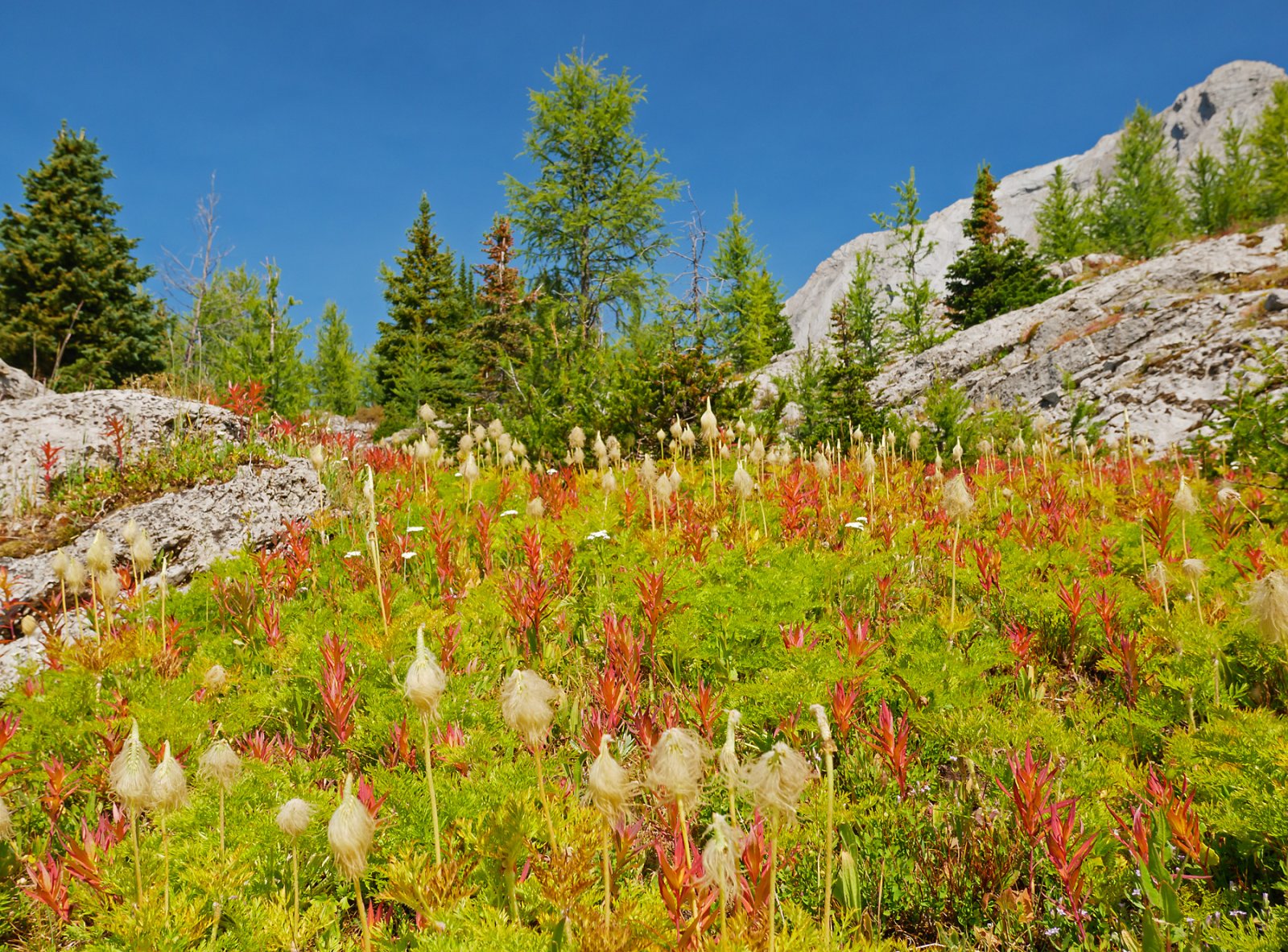 Before the talus slog- Jo savouring some easy meadow walking amongst waving seed heads of the western anemone: 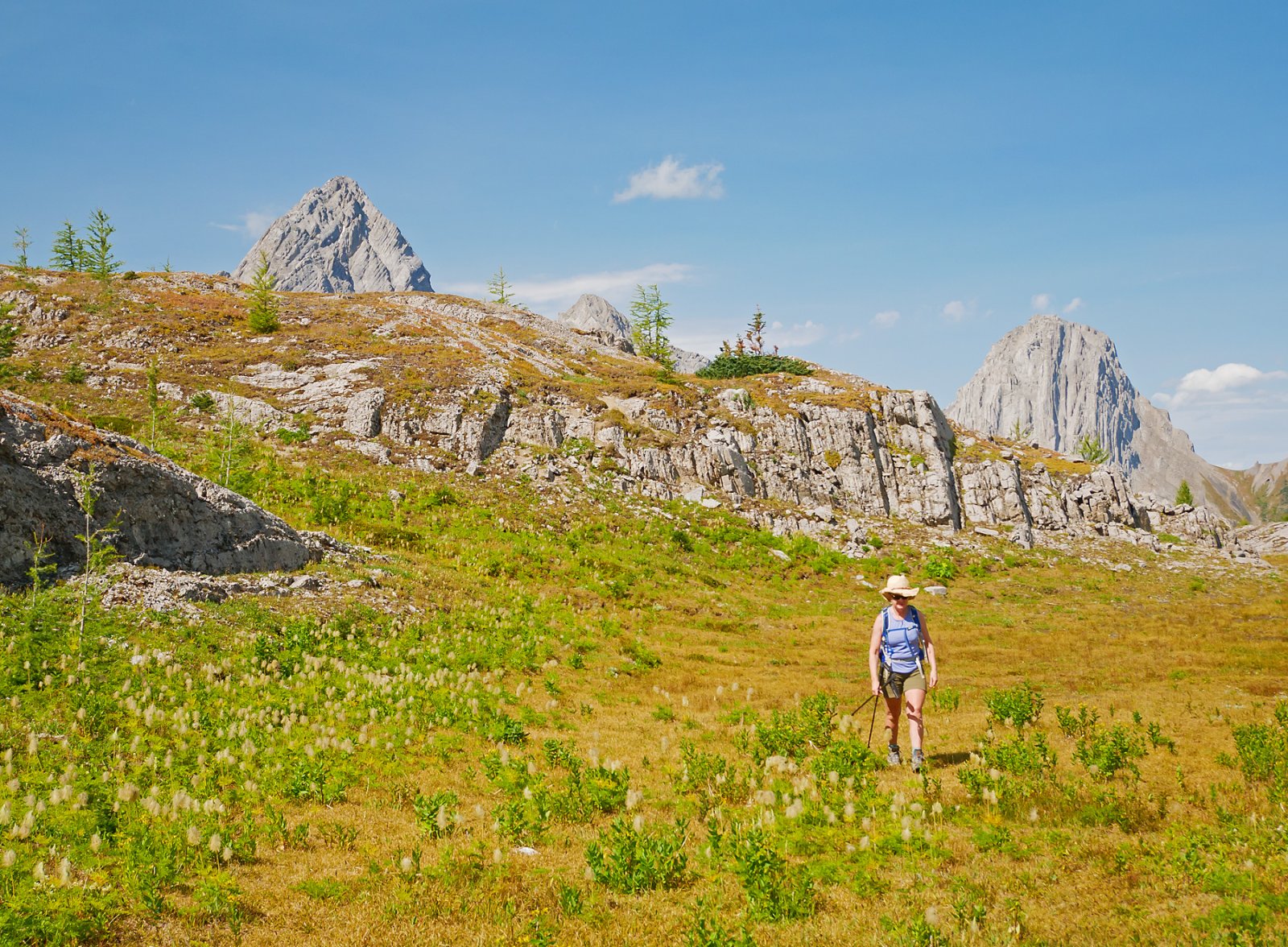 We're there! Dee celebrates our arrival at the col, between Piggy Plus at my back and Mount Burstall in the background: 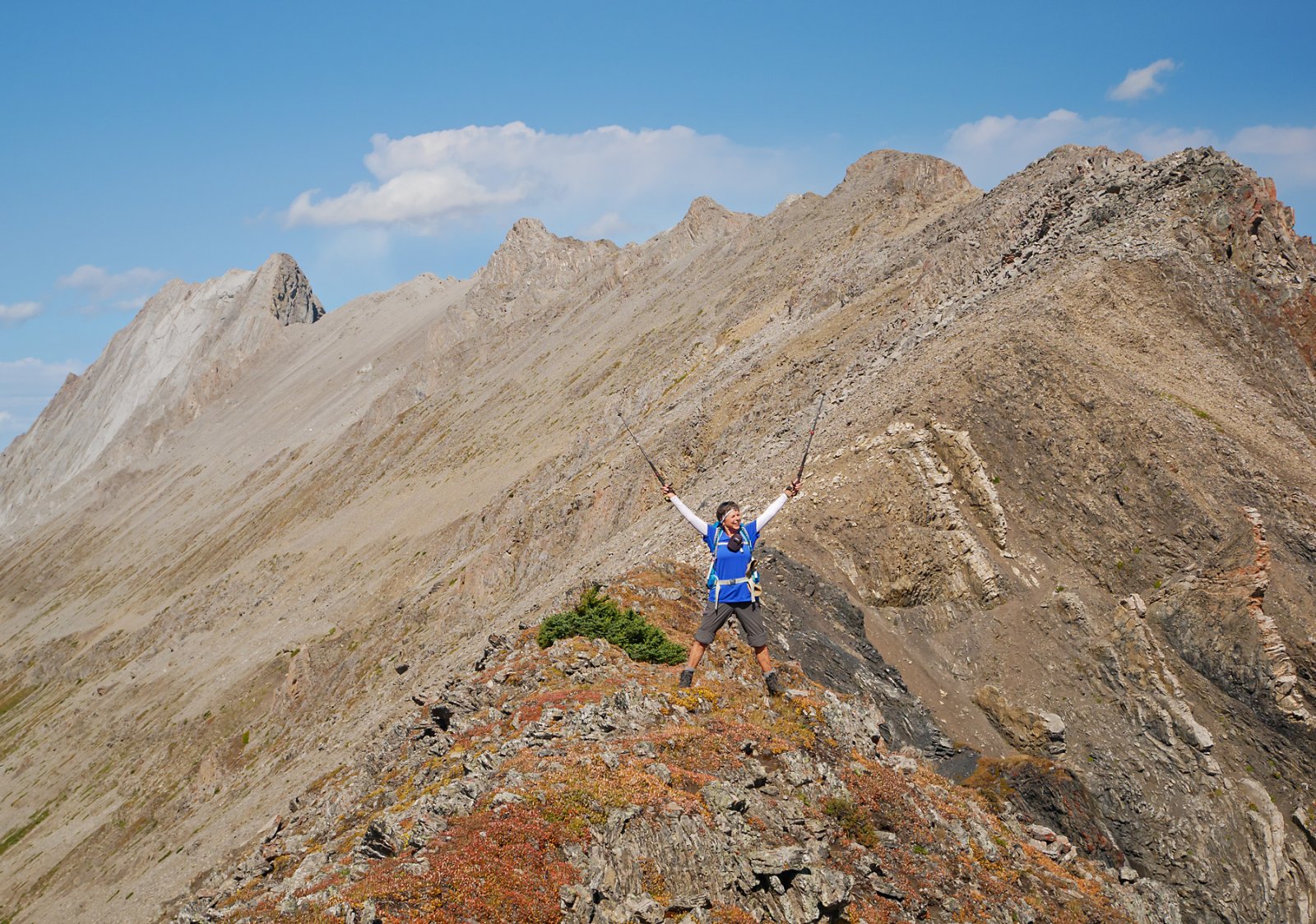 Look way down- into French Creek and it's glacier. A great day trip on skis is to ascend this glacier to the Haig Icefield which is on the BC (far)side of the col at it's head, then traverse across the icefield (hidden from here) and descend the previously seen (and poking out a bit at right) Robertson Glacier. As is usual for glaciers- it's way longer from the toe to the col than it appears from here. 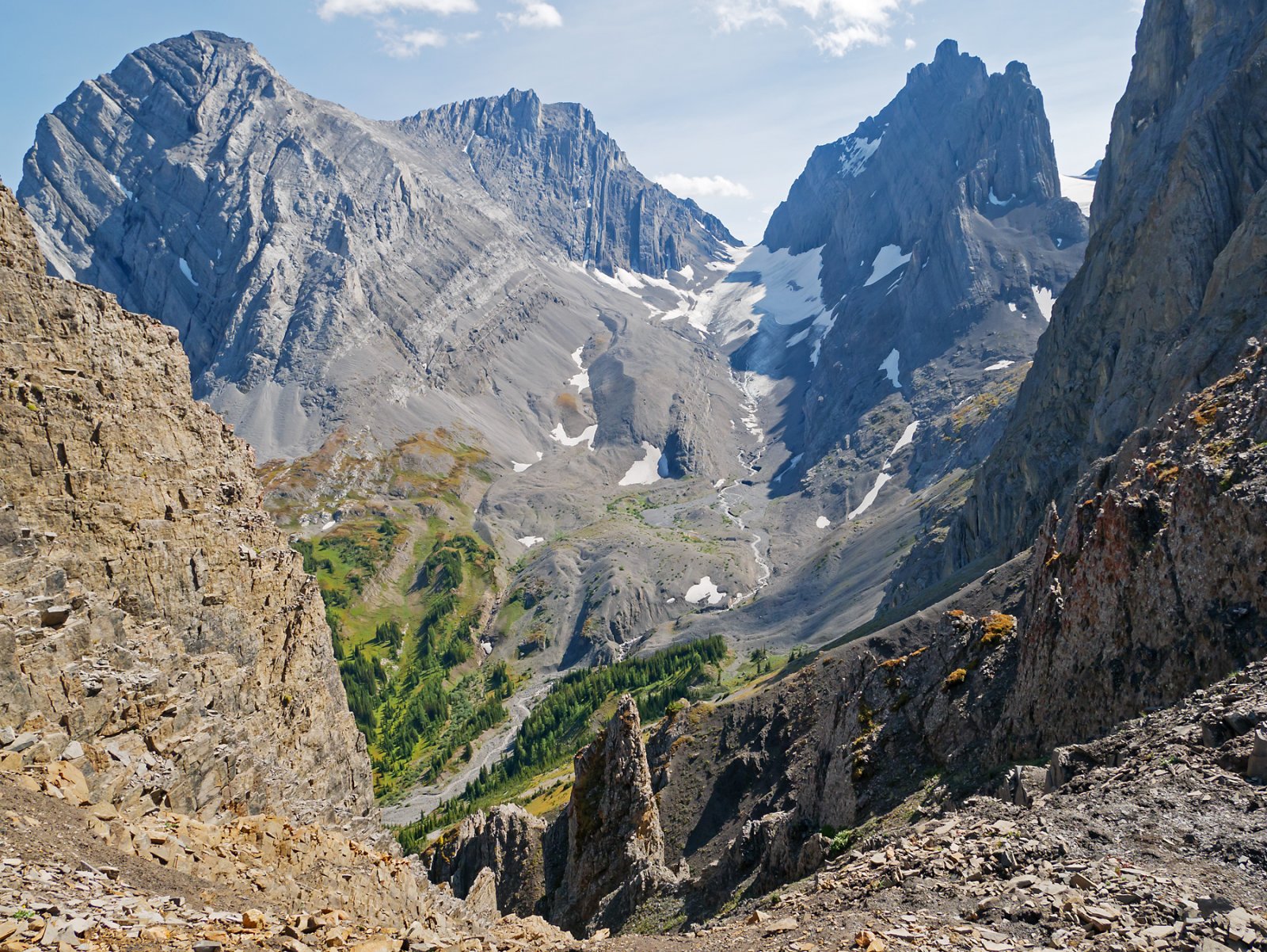 Second break of the day at a minor highpoint along the ridge. 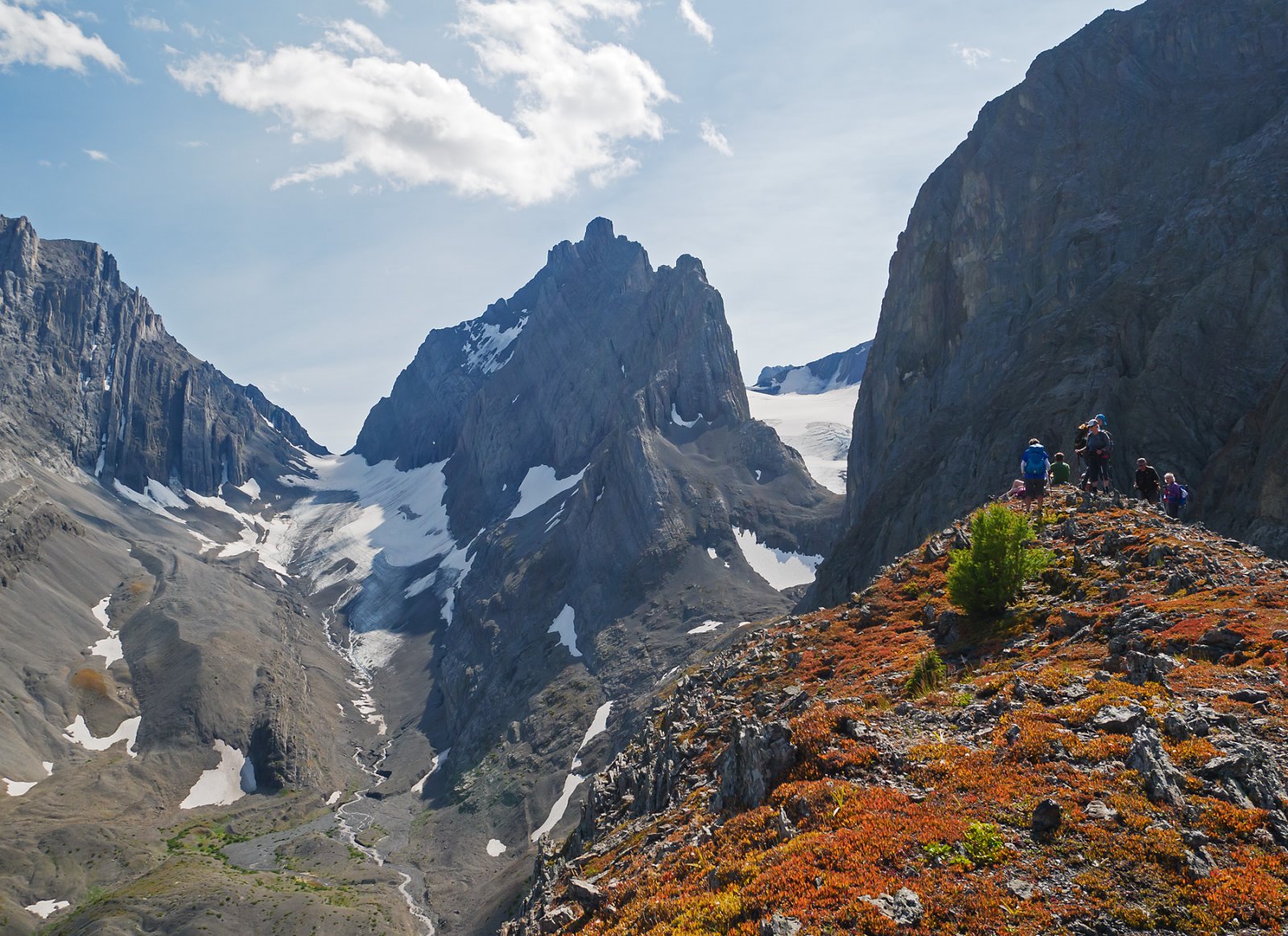 Time to call it a day and head down. We came up near the treed hump at centre and then across the meadows after lunch.
Our more direct route out will simply follow the drainage at right: 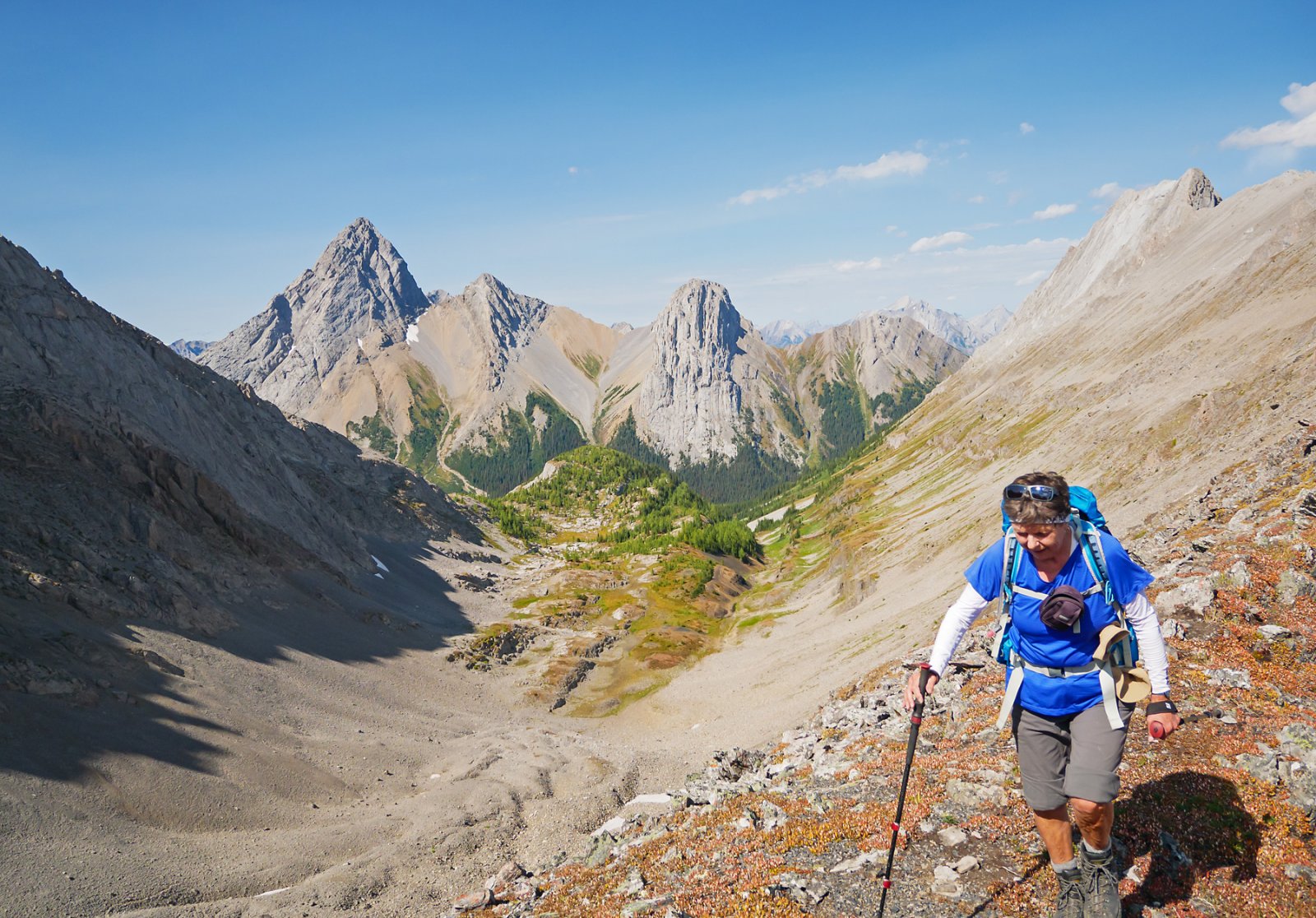 Jo and I took a short detour back into the meadows, looking for my lens cap which I dropped along the way.
Surprisingly, I found it- just where I had kneeled to take a flower photo: 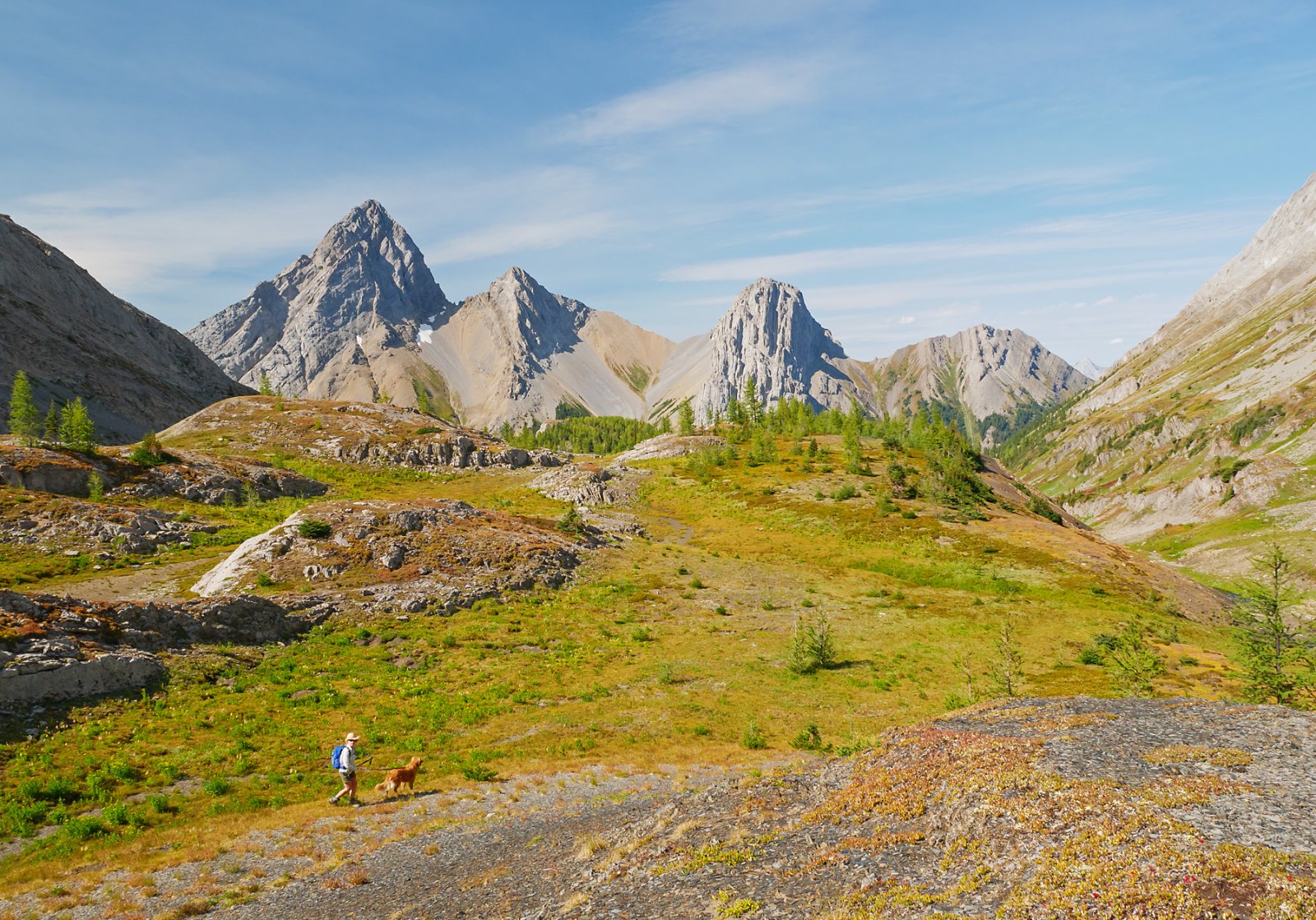 The cause of the errant lens cap- a patch of unusually late blooming forget-me-nots. How fleeting summer is up here! 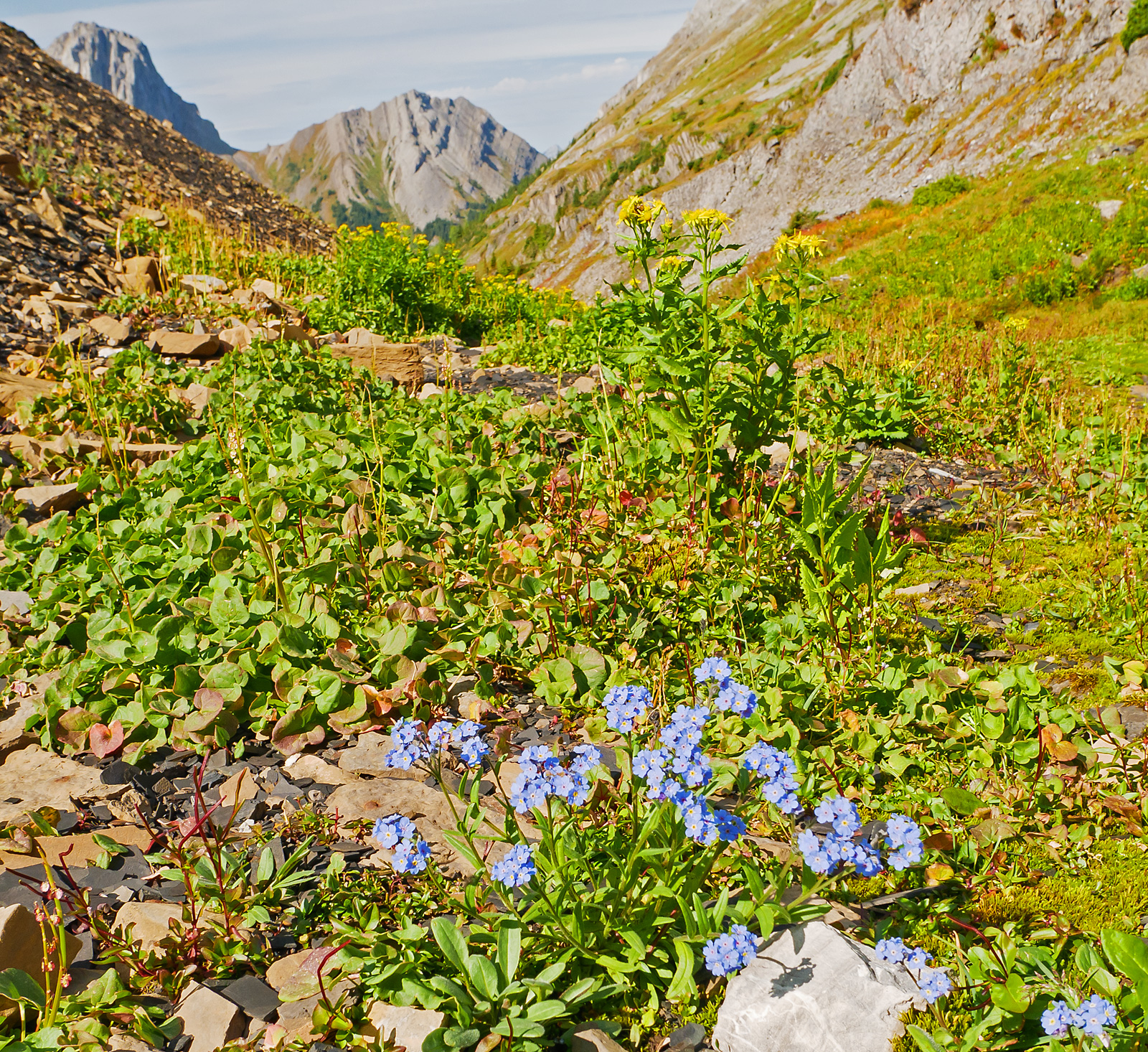 Seedheads of the western anemone- aka hippie on a stick: 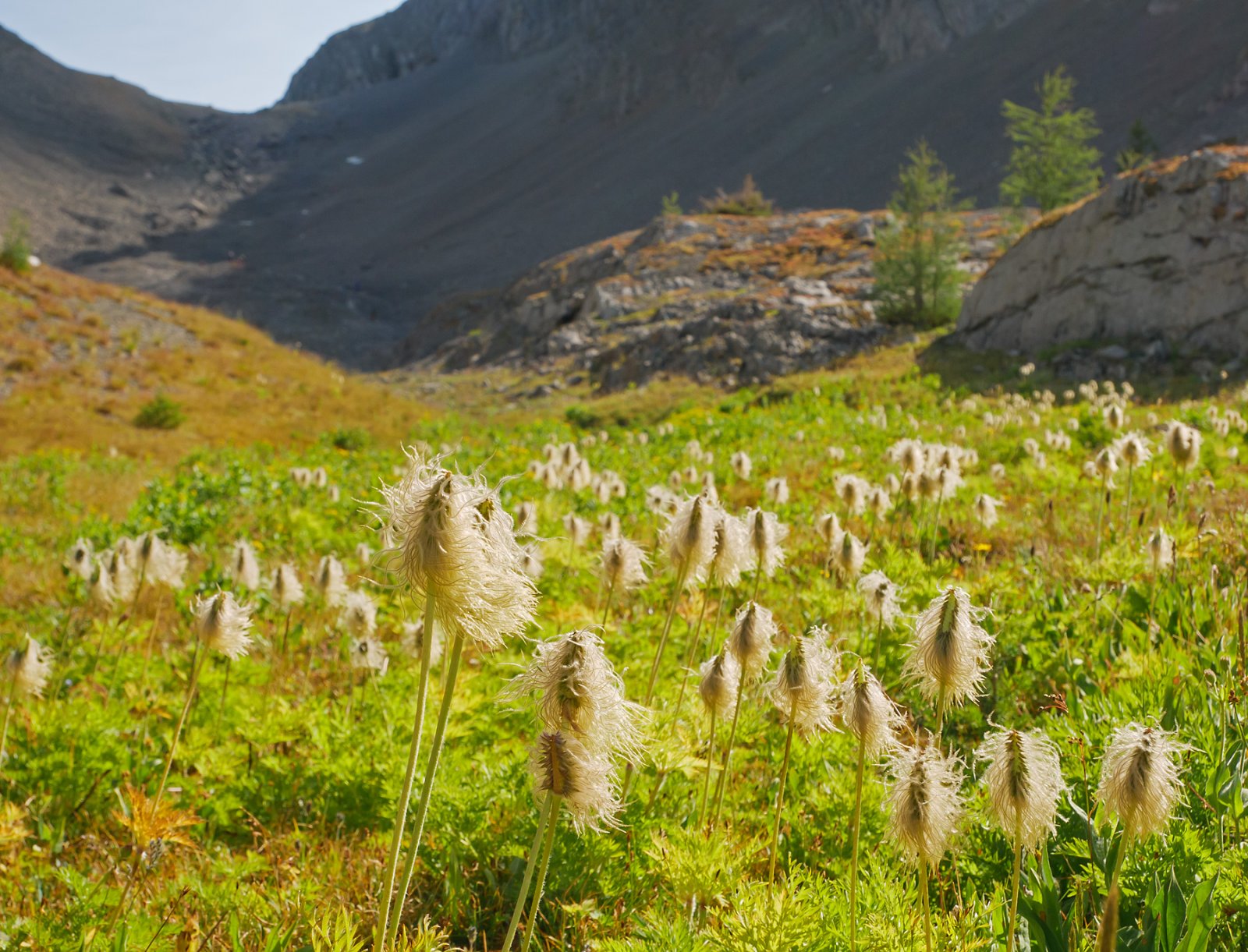 Looking back to the col, and our highpoint on the minor bump to the left of it: 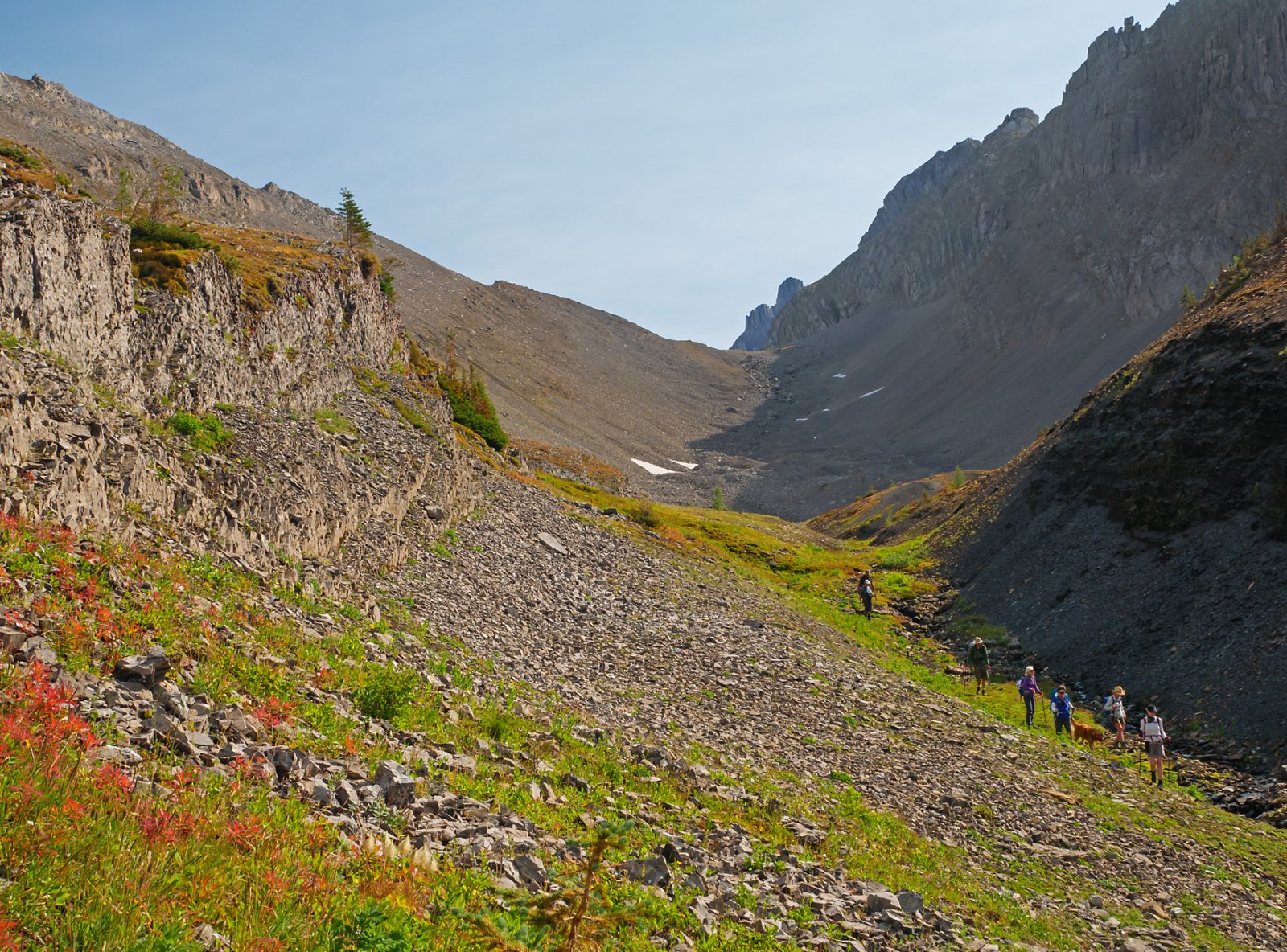 Reds of autumn below the peak of Mount Burstall: 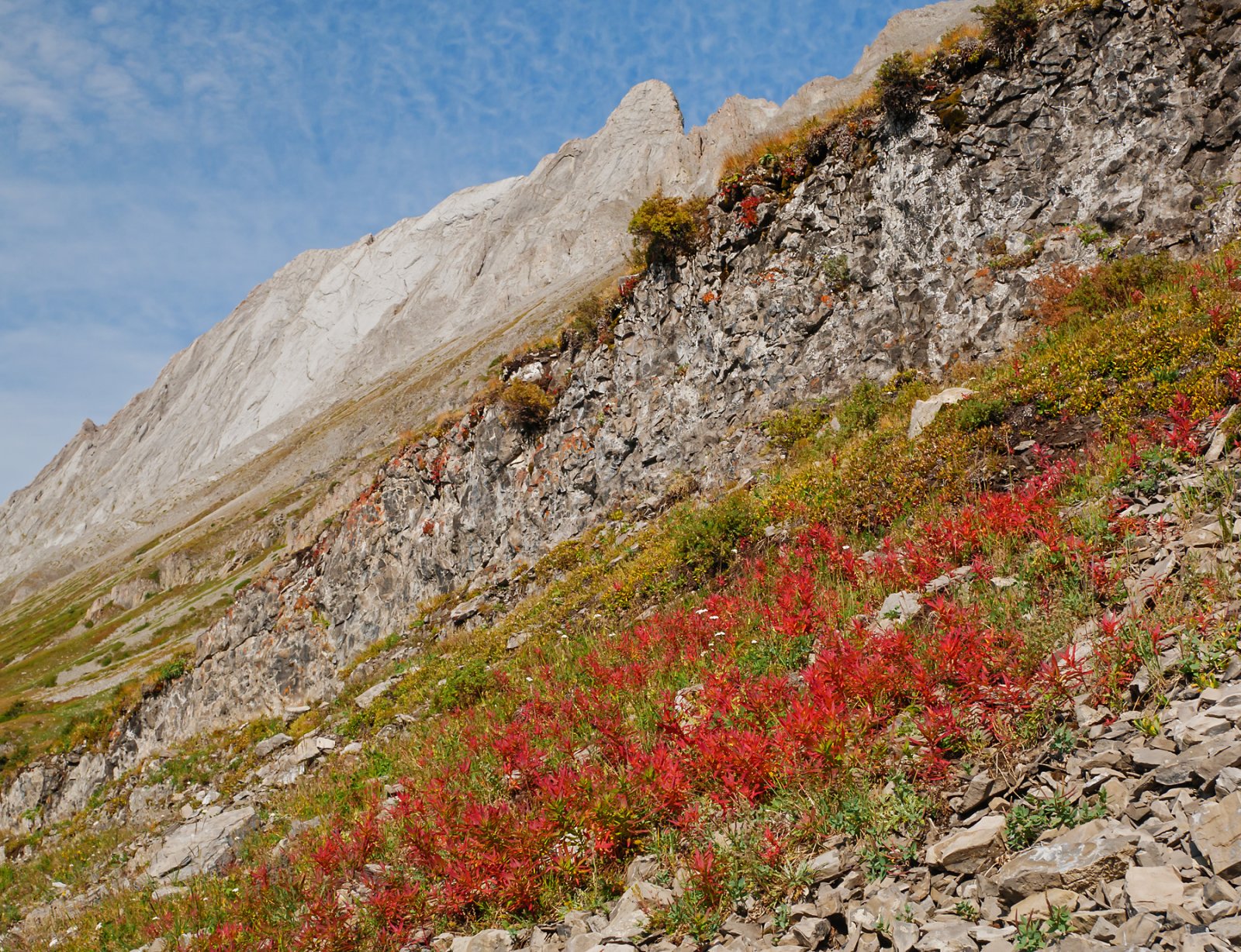 Crossing the first of two remnant pockets of avalanche debris in the route out the drainage: 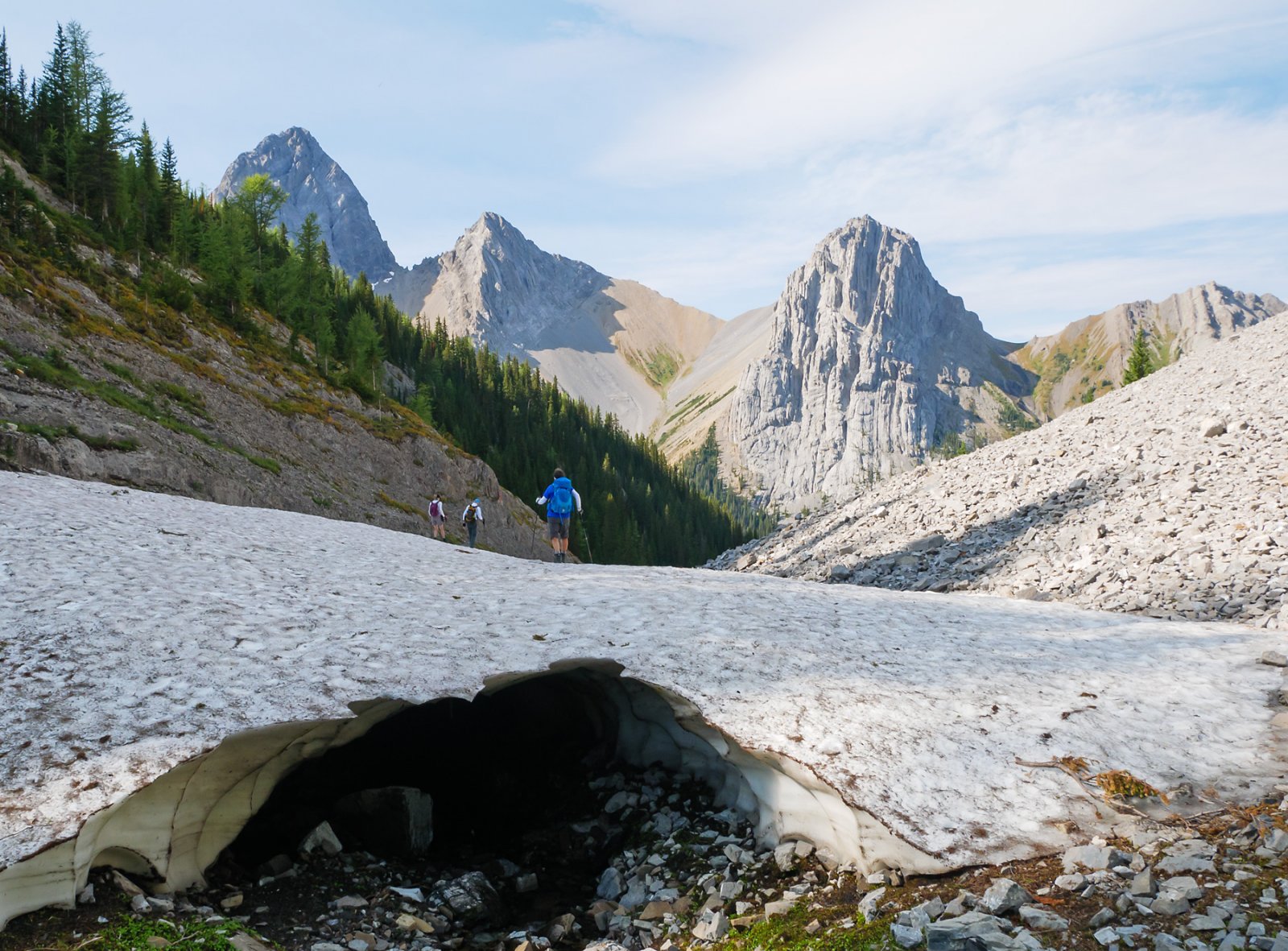 This placid stream drains the appropriately named Mud Lake, near the trailhead after an uninspiring walk out through the forest, which was broken up by foraging for wild
strawberries. And so ends just another day in the Alberta Rockies! 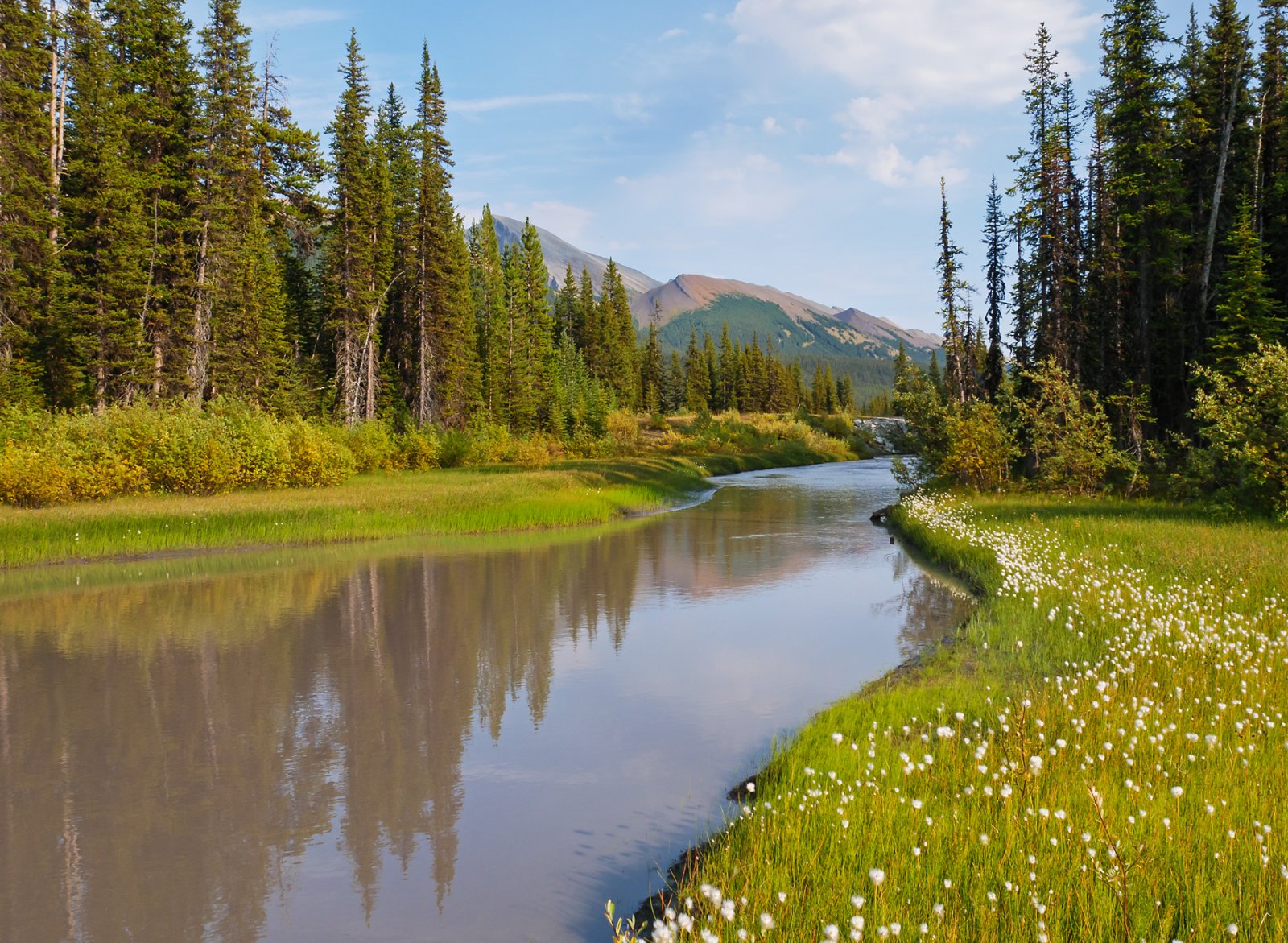 Wow, beautiful photos and incredible views, thanks for sharing. Glad you found your lens cap again!

Almost no words! Fantastic day trip, just nonchalantly hiking around in some of the most beautiful peaks there are. You captured it most excellently!
You must log in or register to reply here.