I'm cross posting this from my blog at www.livevicariouslythroughus.blogspot.com​
​ 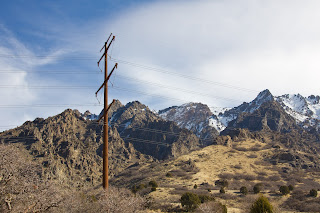 ​
View from the trailhead. Somewhere up above us was our destination.
​
Last week I finally had the breakthrough I've been looking for. Over the past year, I had heard from numerous locations that there are petroglyphs above Willard. The problem I kept running into though is a lack of lack of any clues substantial enough to go off of. I'd find a wisp here and there, and a few tantalizing photographs in a book called "Traces of Fremont" that I checked out from the local library, but that was it. Late in the week, a tip came in that was solid enough that I planned a hike for Saturday. A storm was supposed to come in later over the Presidents Day weekend and Saturday promised decent weather. 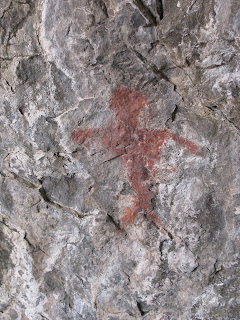 ​
Site 1 Figure
​
I made a few phone calls and invited some friends and family to come along. I made no promises- No, I don't really know where I'm going. I have no idea what the trail will be like, let alone if there will be a trail at all. I have no idea how long it will take. We will have fun though, and if we're lucky find some rock art that few people have seen. A few takers later, we were on our way. We stopped a few places to try to piece together where our destination would be, then made a few more attempts to find a starting spot. A kind resident of Willard told us where the best local trailhead was. A little more driving around and it was time to hike. 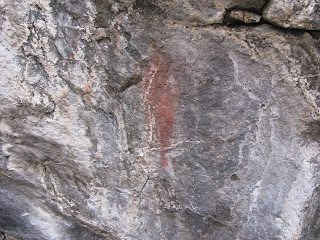 ​
Site 1 Figure
​
We hiked up to the canal road along the base of the mountain, then followed it until we thought it was time to leave it. Then the bushwhacking began. It was quite a climb, with no discernable trail but we made good time, minus a few stops to catch our breath. Finally we made it to our goal. Success or failure? 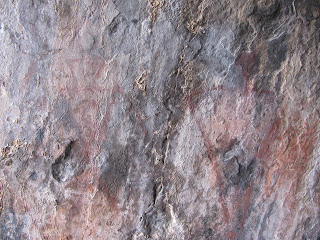 ​
"Superman" and other anthropomorph
​
Success! We found several pictographs painted onto the rock face. A few of them were a very vibrant red color, but most of them were in various stages of fading and water damage. Several were clearly anthropomorphs (human figures), while others were line squiggles. The majority though were smudges of red that were beyond recognition. We spent a while looking around and enjoying the pictographs. Amazing! 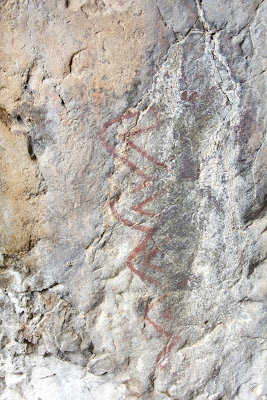 ​
Double squiggle from Site 2
​
The tip I'd recieved indicated another picture that we didn't find at Site 1, so we carefully climbed around to look for any other potential spots it could be. We ultimately did not find the drawing we were looking for, but did find Site 2. Site 2 was more condensed, and had more pictographs than Site 1 did, but they were more faded and damaged than the ones at the first location. My favorite pictograph from the outing was the one I've labeled "Superman". He appears to have a superhero insignia on his chest. Soon after finding the second location we had to leave. We picked our way back down the mountain and back to the car. 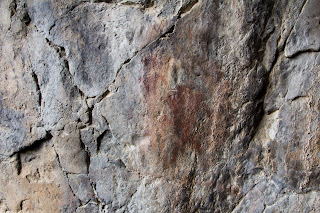 ​
Site 2 Figure.
​
We found more pictographs in Northern Utah! It's always amazing to find a site so close to home when so many people think that the petroglyphs and pictographs are only a Southern Utah or Arizona thing. I definitely plan on returning again to track down the additional locations that I know are there.
www.simpleweekends.com

Thats cool...What group were these made by? When? Etc!

I think there are 2 groups. One group is definitely the Fremont. They had a settlement down below that was bulldozed when Willard Bay was built. The other is probably Shoshone or Ute.
www.simpleweekends.com
You must log in or register to reply here.
Similar threads