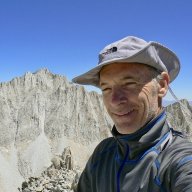 Hello all,
Found my way here after googling trip reports of Seven Gables, since I've been noodling about a trip to the Granite Park, Bear Creek, Royce Lakes area in August. I'm 65 and backpacked in the Sierra as a kid, later in Colorado while going to CU, then had a few decades with nothing. Started up again about 8 or so years ago. Now, moving toward (but will never actually be) UL backpacker and hoping to keep going for some years still. I love a) carrying a 25-pound pack for a five day and b) wearing trail runners because knees! I'm rather obsessed with the Roper's SHR, though I'll probably never do it because old! but love to look at trip reports and might do a section or two. Hard to find anyone my age willing to scramble on talus slopes for very long, but I find I enjoy the focus required and just getting into that slog pace. Did the HST last year. Arrived at Guitar Lake in the afternoon feeling great but became violently ill later and actually had to be airlifted out next day, totally dehydrated and trail trash. A couple of images from that trip, which I'm sure many or even most here have already done.

Looks like a nice scenic area to be air lifted from. Welcome and I look forward to seeing some of your trip reports.
You must log in or register to reply here.
Similar threads