I have been looking at the Big South Fork map for a couple years. There is a stretch of river between Big Island and Devils Jump/Blue Heron that is only accessible by boat. On top of that, a lot of the trails that parallel the river for other sections don't actually have views of the river with all of the trees getting in the way. I have also been reading trip reports of packrafting out west that sound like a lot of fun.

With the idea of packrafting the Big South Fork in mind, I got a Klymit LWD off Massdrop last fall. I'm not a whitewater paddler and I did not want to freeze, so I have been waiting for the temperature to warm a bit and for a reasonable water level. The stars finally aligned, the kids were in camp, the water level had fallen after a bunch of rain and because it was the beginning of July, it definitely was not cold.

I planned on putting in at Station Camp and paddling approximately 10 miles, camping somewhere near where the KY trail parallels the river and then hiking back to Station Camp by way of the KY Trail and No Business Creek. This would also allow me to see a part of the area that I had not seen before. Basically, I would have 10 river miles and about 10-15 trail miles depending on the exact route I took back to the car.

It was a beautiful day, but very hot. When I got out of the car, the thermometer was 85. The forecast was for a high in the low 90s with a heat index approaching 100. There was a slight chance of thunderstorms late in the day. I looked at the clouds and hoped they would block some of the sun. 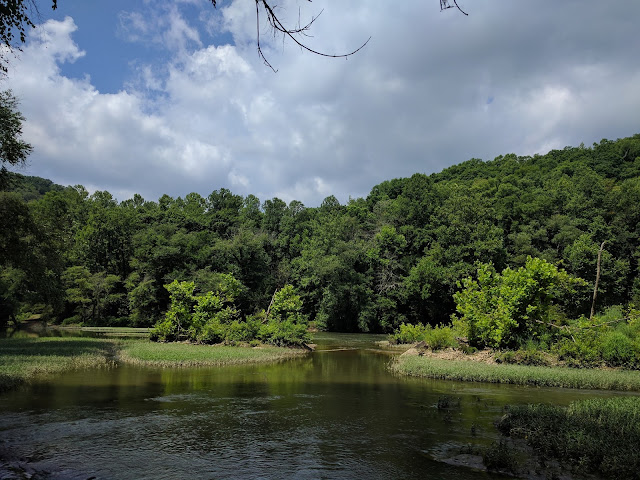 All loaded up and ready for the maiden voyage. 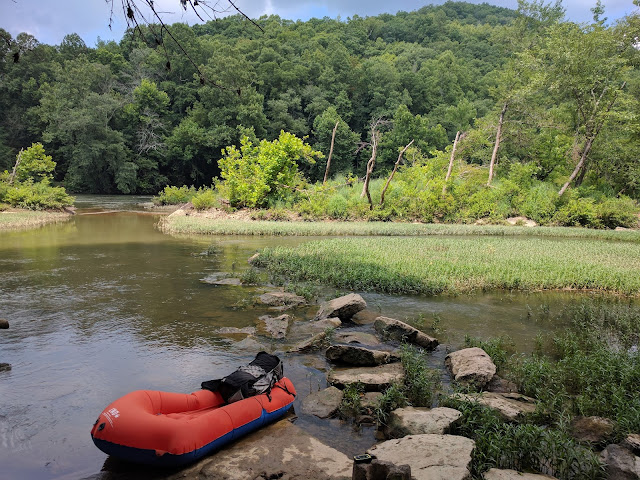 There are a lot of flat water sections with a very slight current, nice for floating, but I had to work to make forward progress. The ~3 mile stretch from Station Camp to Big Island is mostly flat, I had to paddle most of the way. I'm not sure I would repeat this part again. 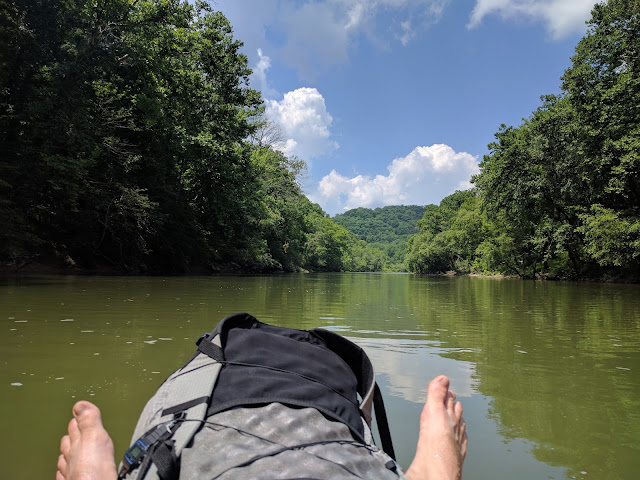 I liked this rock, it looked like a big toadstool. 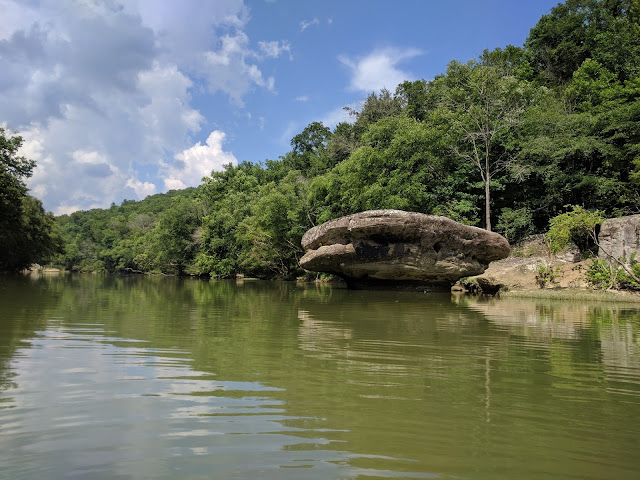 There are a lot of swift riffles that maybe would be considered Class I, they were easy to handle, but a couple time I was wishing for higher water as I scraped the bottom and bumped rocks. 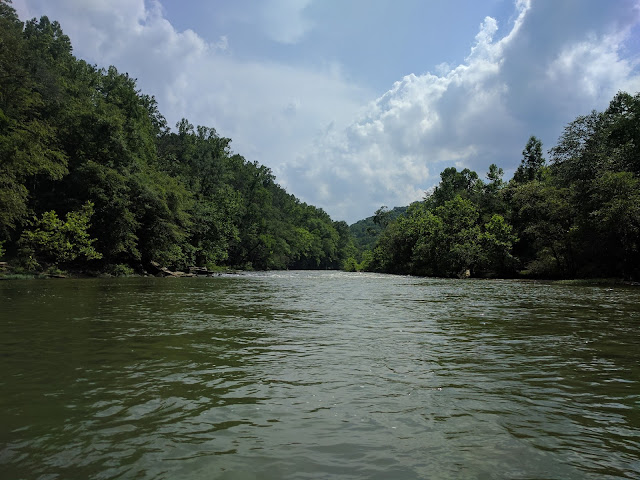 Around 4, the clouds got a little thicker and I began to hear thunder in the distance. It actually sprinkled a little bit which was nice since the heat and sun was beginning to wear on me. 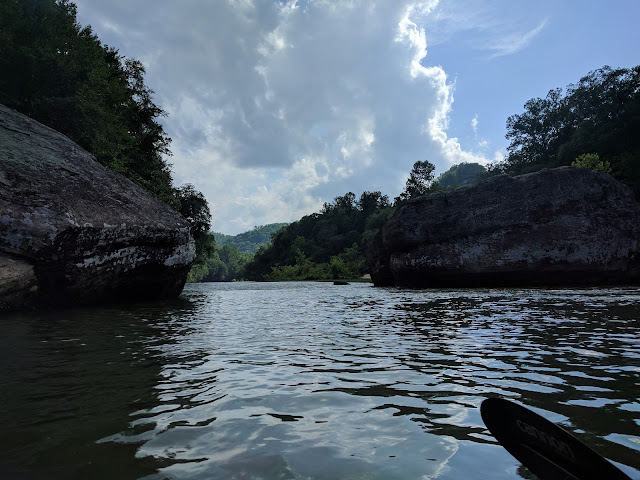 According to American Whitewater, there are two Class II rapids, one at 7 miles and one at 8 miles. They both had waves in the 2-3 foot range and some narrow passages that required maneuvering. I felt like I had to work a bit to keep from capsizing or getting pinned against a rock. Both times I took on enough water that I pulled over at the first opportunity to dump out all the water. Both times were a lot of fun.

About the 9 mile mark, I began looking for a campsite. There had been a great one in the fall around mile 10, but I could not remember how far above water it was, so I decided I would stop at the first good site. Unfortunately, this site was on the side opposite the KY Trail, so I would have to cross the river in the morning, but it had a nice view and was not too trashed. 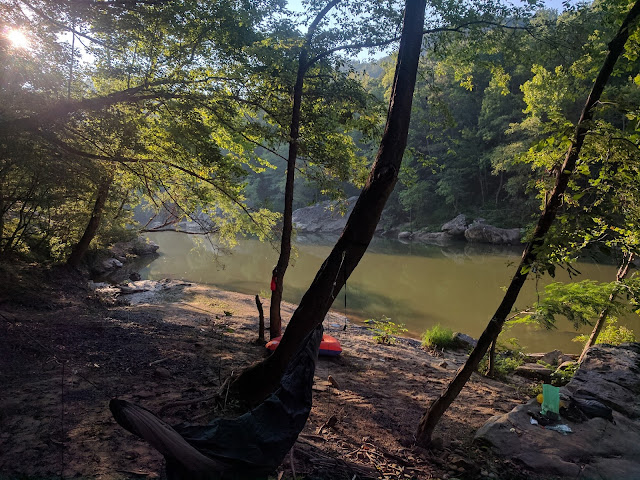 I watched the light change, cooked dinner and really wished I had a beer. I also spent a lot of time swatting biting flies, they got me a couple times and I got them a couple times. 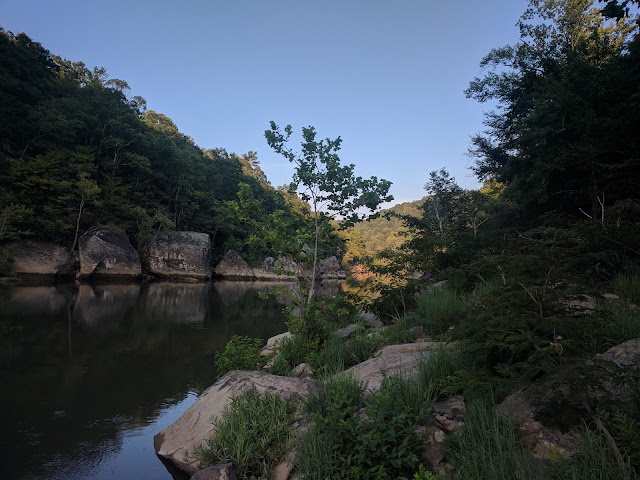 I had visions of enjoying the stars, but I was wiped out and in the hammock by 9:30 and asleep by 10. 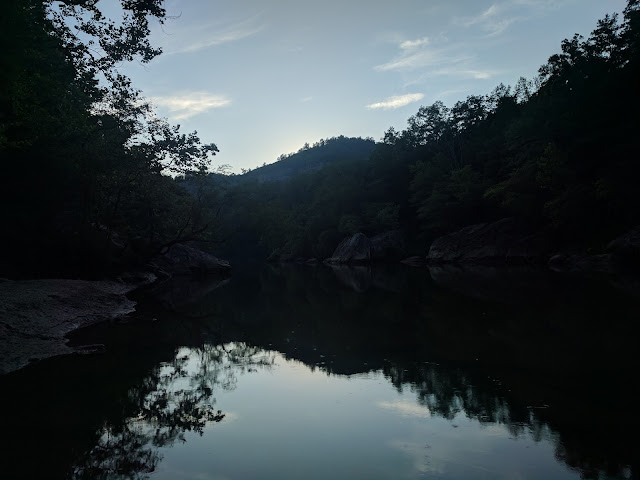 I woke up, choked down a bit of oatmeal that I immediately regretted making since it was already hot. I ended up carrying out what felt like a pound (certainly less) of uneaten oatmeal.

This is looking across the river at my campsite before setting off on the hiking portion of the trip. 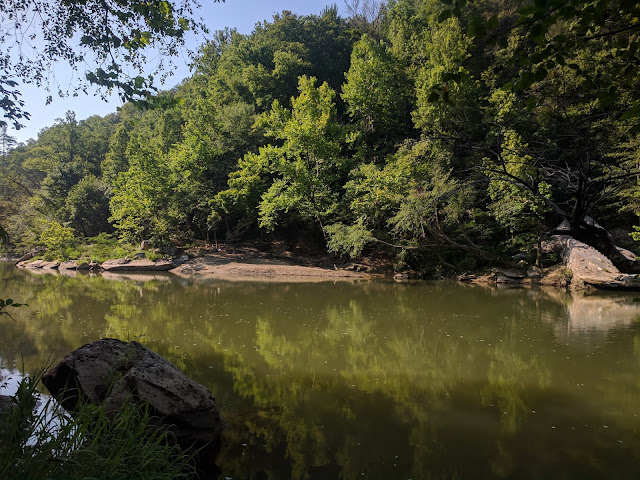 This is the "normal" view of the river from most of the trails, i.e. not much to see. 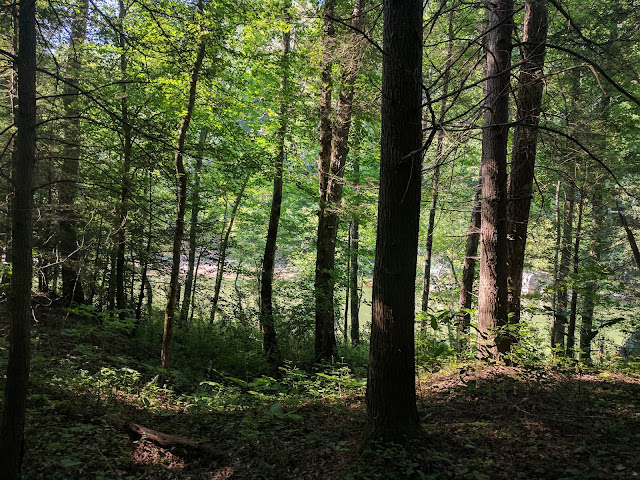 Parts of the KY Trail are nice 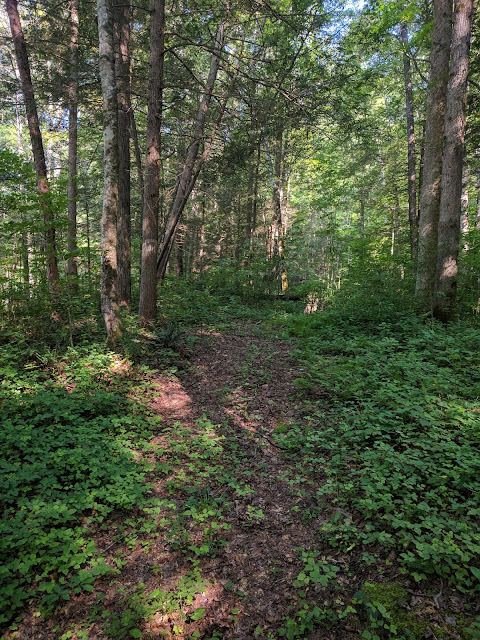 and parts are very overgrown. It is pretty obvious this part of the trail doesn't see many people. 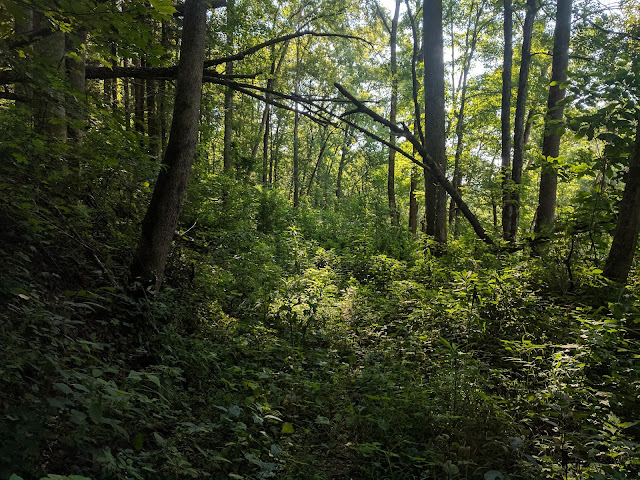 Sandstone and water and time do neat things. 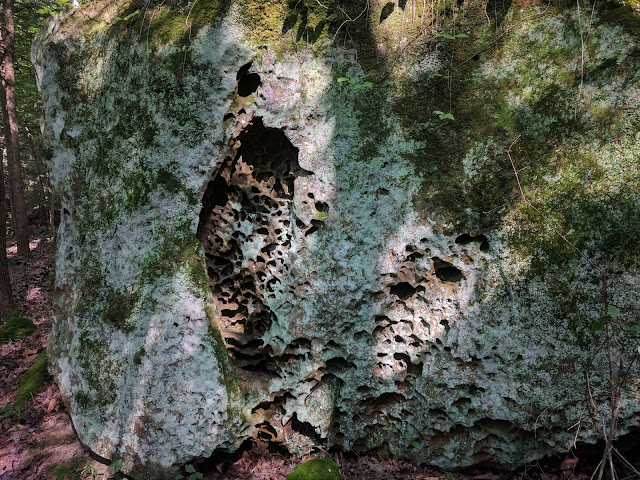 A lot of the trails in the area follow what appear to be old railroads or roads, nice hiking. 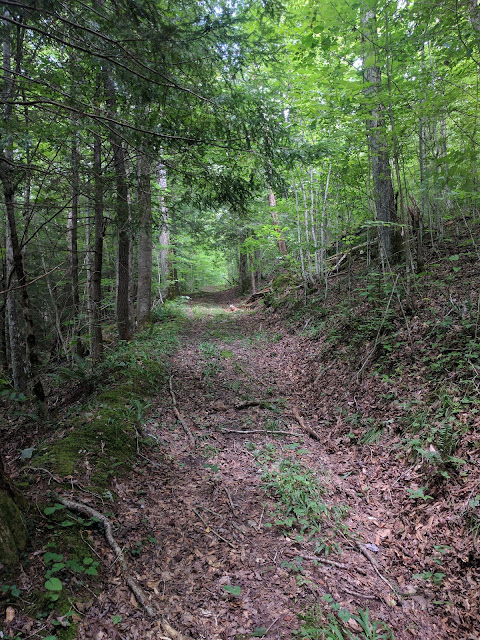 A little bit of wildlife. 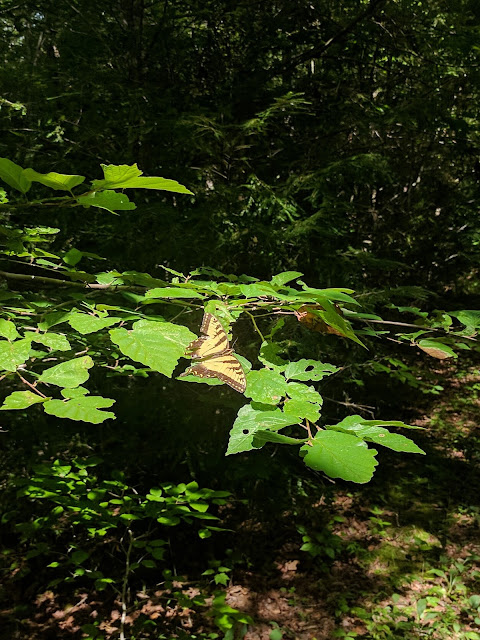 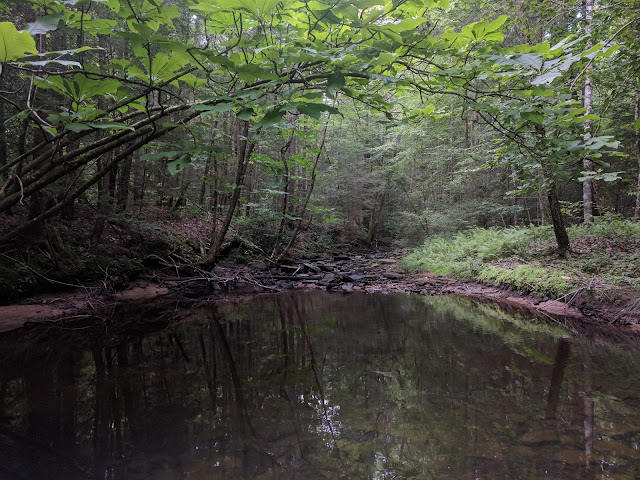 The "bridge" over the creek, the water was low so it was easy to rock hop across. 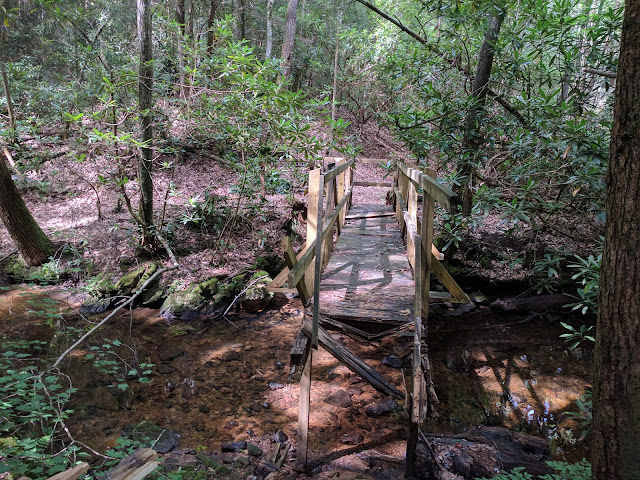 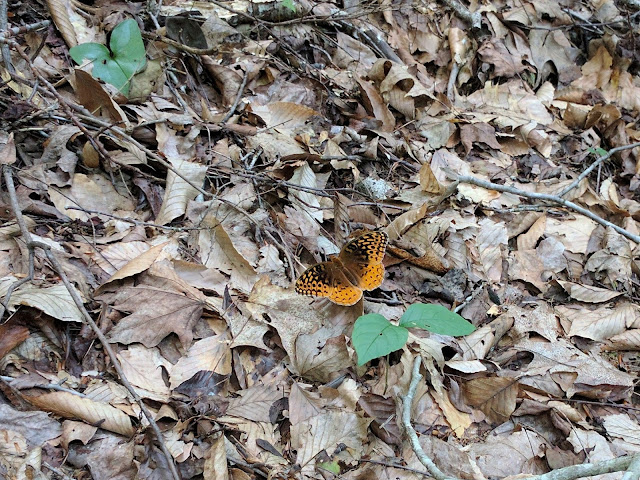 The "bridge" over Difficulty Creek. 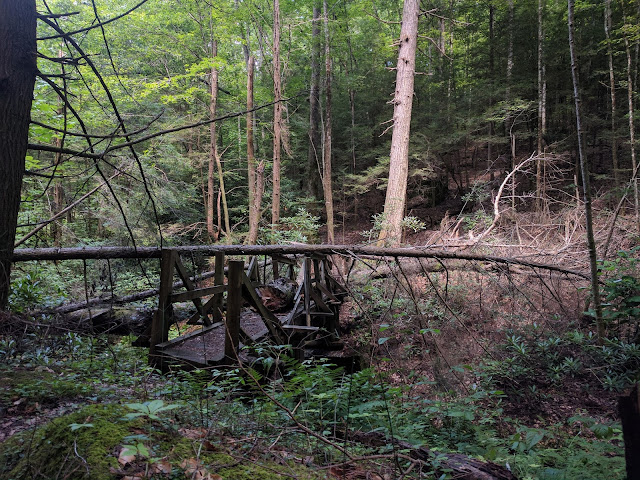 Somewhere about this point, I realized that I was making really good time. I had been considering camping along No Business Creek and checking out the Muir Overlook but I was soaked with sweat, slightly dehydrated and had visions of swatting bugs for five hours. I decided that I would see what happened over the next couple of hours, if I could be at my car by 5:00, then I could be home before my kids went to bed. Not long after this, I began to hear lots of thunder in the distance which made my decision pretty easy.

Lots of rock walls in the area. 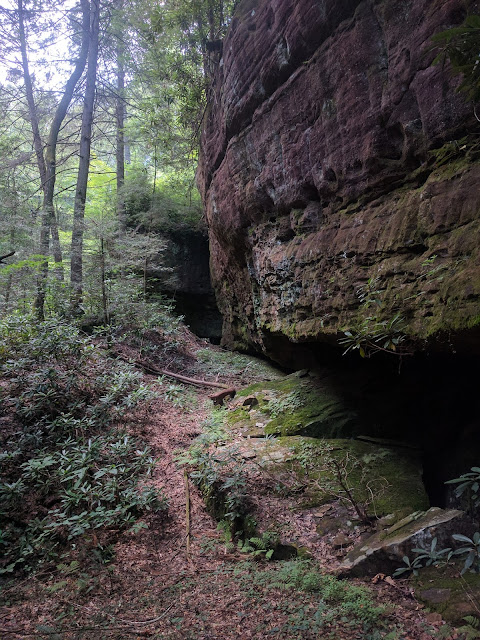 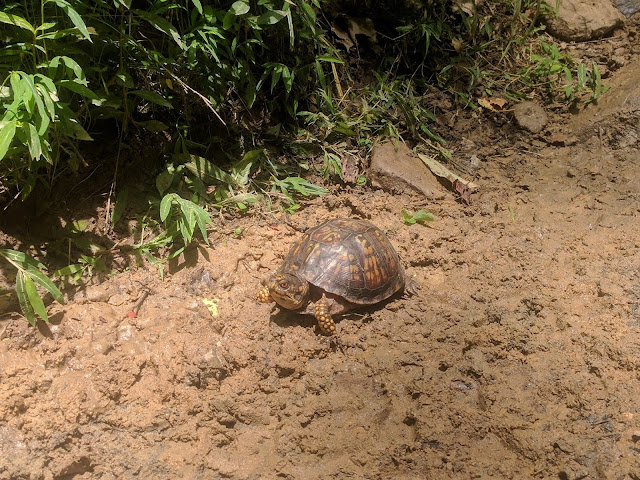 About this point, it began to rain so the camera got put away. After this I saw 2 snakes and 1 deer. The trail turned into muddy slop where the illegal ATVs had been playing and I was completely soaked with sweat and rain. I was ready for a beer and dry clothes. I got to Station Camp Crossing about 3:00 and saw the first people of the day, a couple of horse riders had just forded the river ahead of me. I used half of my paddle to help cross the river, it came up to my crotch at the deepest point, but the current was not too bad so the crossing was pretty straightforward.

Dry clothes and a beer were awesome and then a drive up out of the valley by way of a seven mile gravel road. Sometime in the last 24 hours, the Park Service dumped a lot of dirt and regraded parts of the road. This combined with the rain made it a little slick, the anti-skid light kept coming on and I had visions of ending up in a ditch or just not being able to make it up a steep part of the road. In the end, I made it to the paved road and then a burger in Oneida and an easy drive home.

This ended up being a great trip that was very different from my usual backpacking trips and I got to see a part of the park from a different perspective. I paddled about 9ish miles in 5 hours with a couple breaks and I hiked about 12 miles. The next time, I think I will hike down to the river from the west to Big Island and start paddling there. That way, I would not have a ford to do at the end of the trip and would not have to worry about the river rising too much.

Even though this was a great trip, I think I am done with backpacking in the summer heat. I either need to be up in the mountains or in Canada next summer.
My trip reports: backpackandbeer.blogspot.com

Awesome!! Though I have close access to lots of hiking and paddling around where I am, I want to get out and see more places back east like this.
P

I live where there's not much humidity now, but I sure remember being in the South Fork when it was humid. Great trip report. Love the pictures. I'm not fond of snakes, and the section of trail that's overgrown... not gonna find me there. Pringles

Great report. What kind of boat are you floating with?
Do not pray for easy lives. Pray to be stronger men. - JFK
Orem Chiropractor

DrNed said:
Great report. What kind of boat are you floating with?
Click to expand...

That is a Klymit LWD, super light weight, but likely won't take the beatings like a "true" packraft, good enough for me since I'm not much of a paddler.
My trip reports: backpackandbeer.blogspot.com 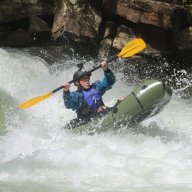 just now seeing this! I've been planning a packraft trip from the Big South Fork Confluence to Blue Heron...paddling and hiking. The John Muir Trail (the other JMT) and some of the side trails combined with paddling a majority of it. The BSF Gorge would be the crux, in a kayak its solid class 3/4.
Great trip!
“Something will have gone out of us as a people if we ever let the remaining wilderness be destroyed ... We simply need that wild country available to us, even if we never do more than drive to its edge and look in.”
- Wallace Stegner

BJett said:
just now seeing this! I've been planning a packraft trip from the Big South Fork Confluence to Blue Heron...paddling and hiking. The John Muir Trail (the other JMT) and some of the side trails combined with paddling a majority of it. The BSF Gorge would be the crux, in a kayak its solid class 3/4.
Great trip!
Click to expand...

Are you thinking of a packraft? Start at the confluence and paddle to Blue Heron and then hike back? I don't have enough experience to paddle from the Confluence (and would not want to do that solo if I did), but I think that would be a great trip. I really liked the Honey Creek area when I hiked through there a couple years ago.

I assume you are aware of Angel Falls and Devils Jump, from what I have read, those would be the real crux if you tried to paddle them.
My trip reports: backpackandbeer.blogspot.com

@wsp_scott yeah I've had it my head for a few years now. Confluence to Blue Heron, a thru-hike/paddle with a shuttle. I'd probably portage the Big 3 in the Gorge Section with a pack-laden packraft, but the rest wouldn't be bad. Mostly class rapids 2-3 after that. Angel Falls and Blue Heron too, but at the low levels I'd want to do it at they won't be bad (~500cfs). I've kayaked the Big South Fork from the Confluence to Leatherwood dozens of times from 300cfs to 3000.
Probably a crazy idea but linking up some of the river miles with the trails would be pretty cool and fairly sporty until you get to Leatherwood.
“Something will have gone out of us as a people if we ever let the remaining wilderness be destroyed ... We simply need that wild country available to us, even if we never do more than drive to its edge and look in.”
- Wallace Stegner
You must log in or register to reply here.
Similar threads